As they have for nearly 240 years now, the Patriotic Exercises kicked off the 4th of July festivities on Monday. Under brilliant blue skies, our flag was honored, patriotic songs performed, and dignitaries were introduced. 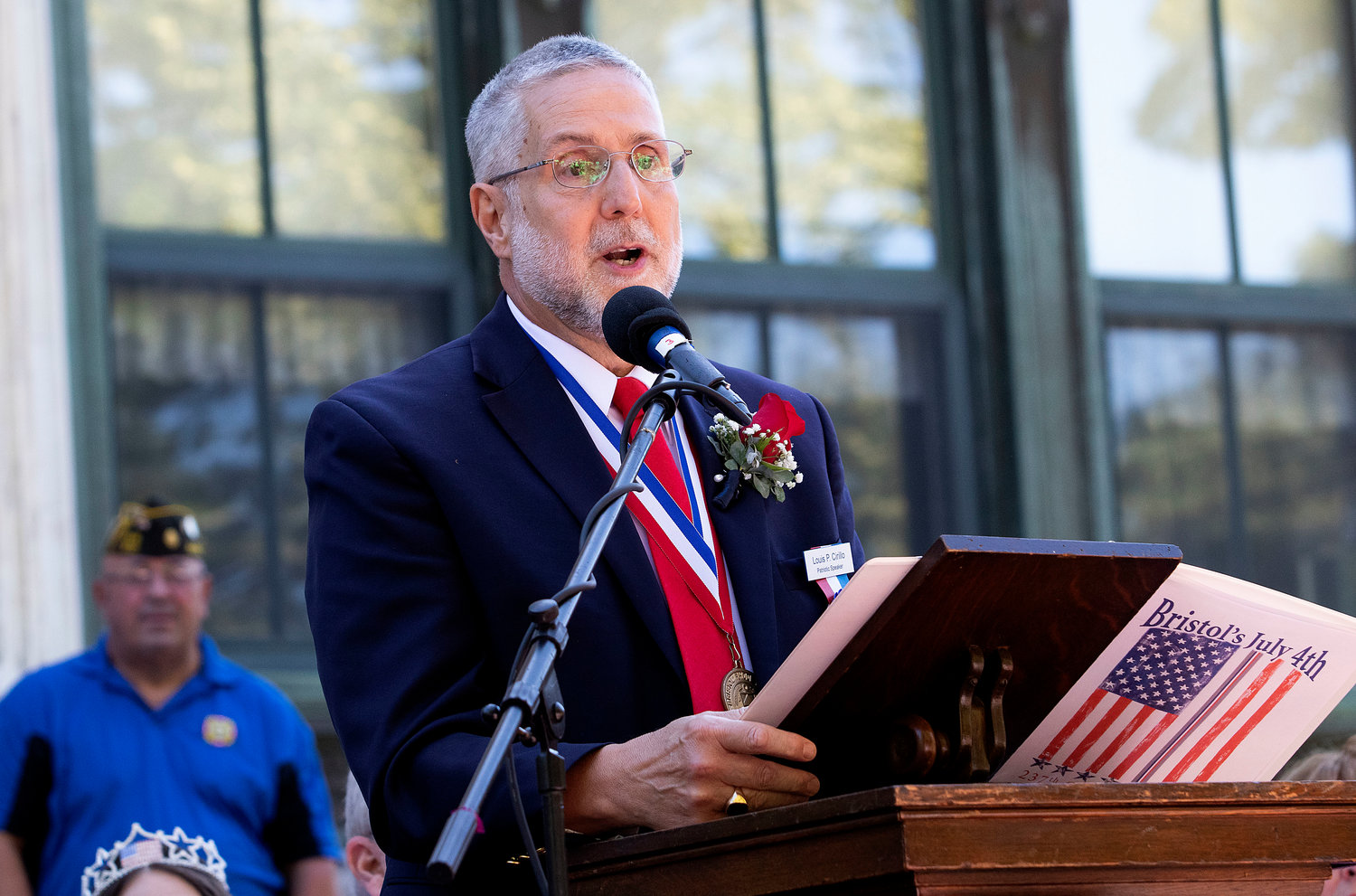 Patriotic Speaker Lou Cirillo delivers his address during the Patriotic Exercises ahead of the 237th Bristol 4th of July Celebration on Monday.
Richard W. Dionne Jr. 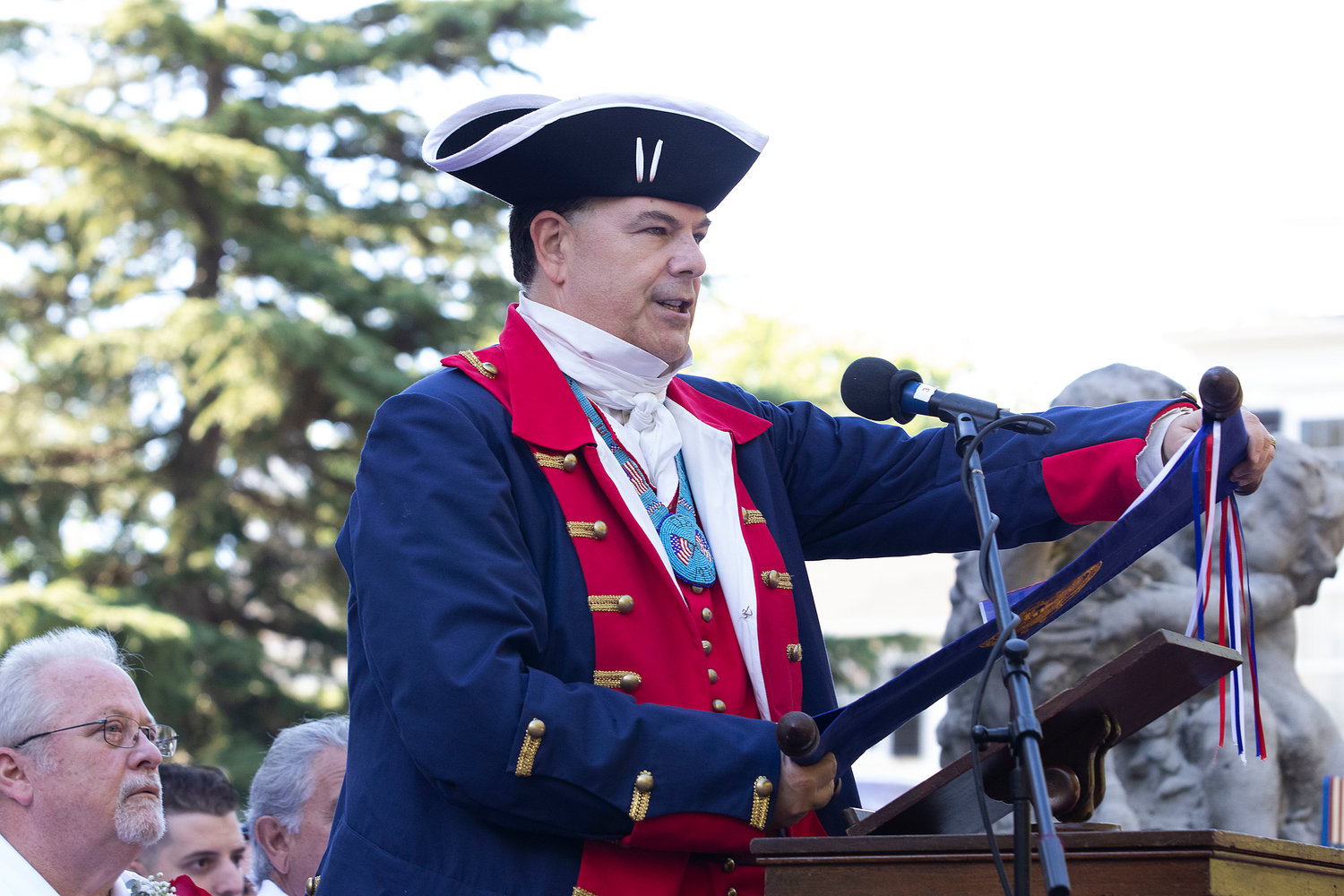 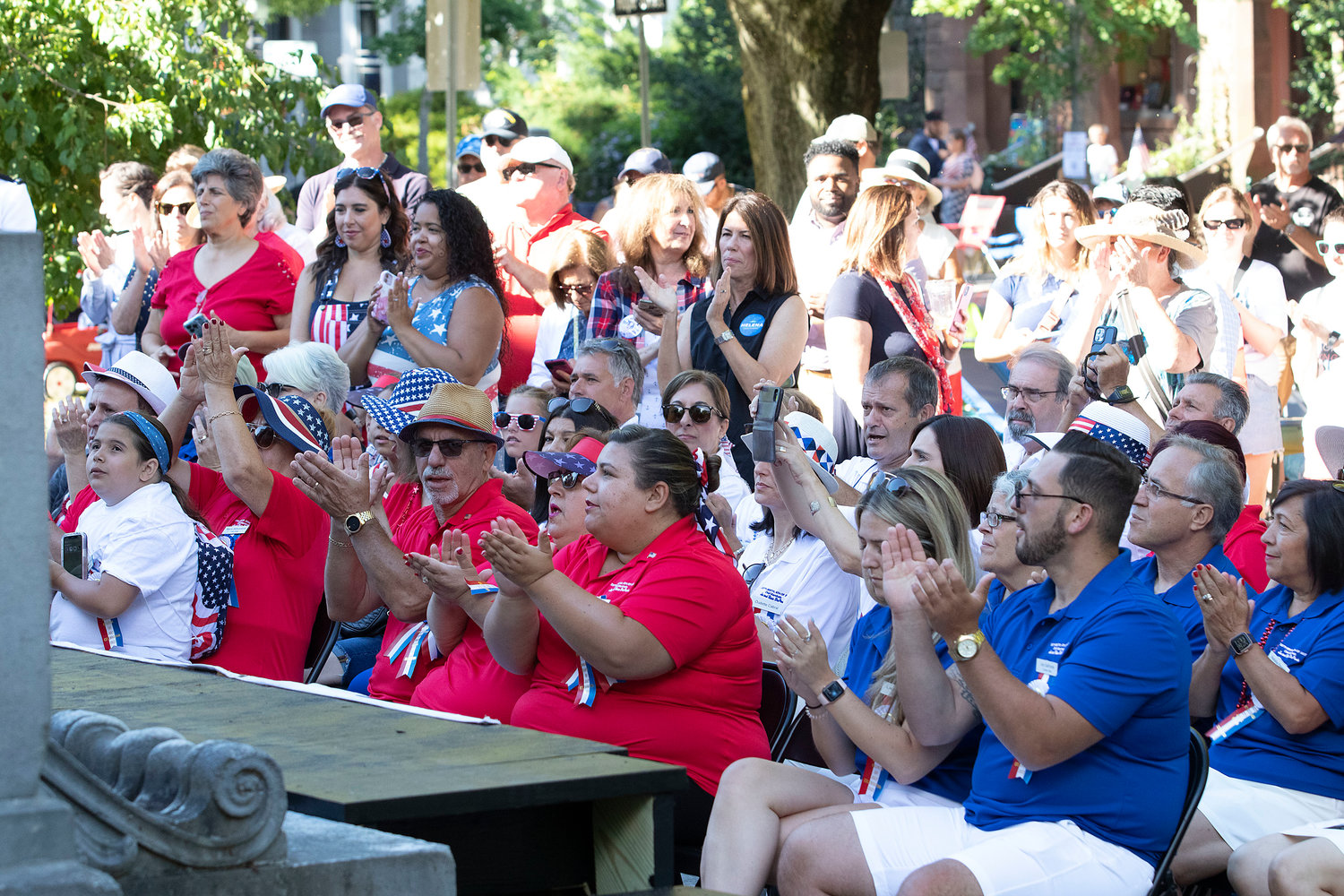 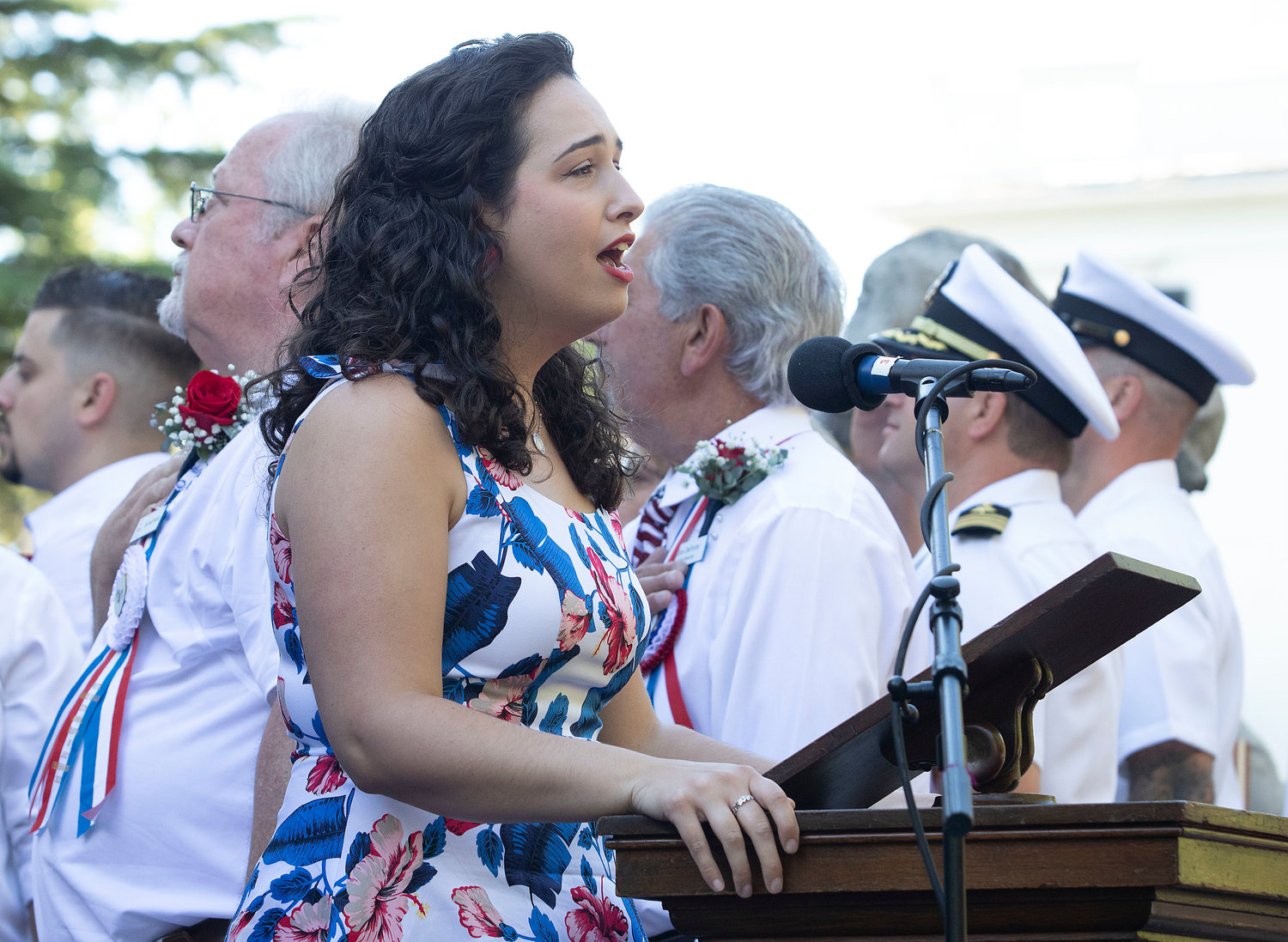 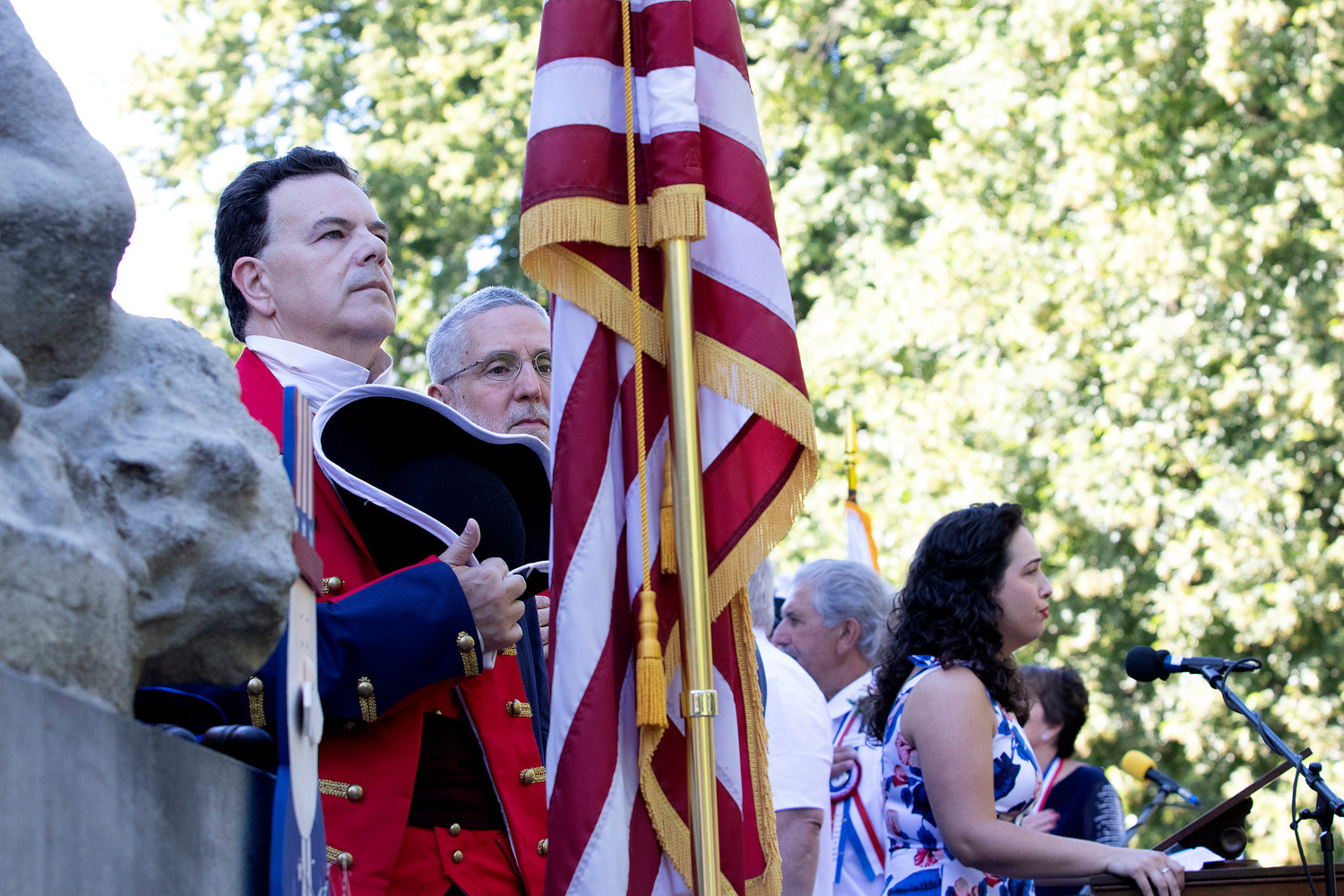 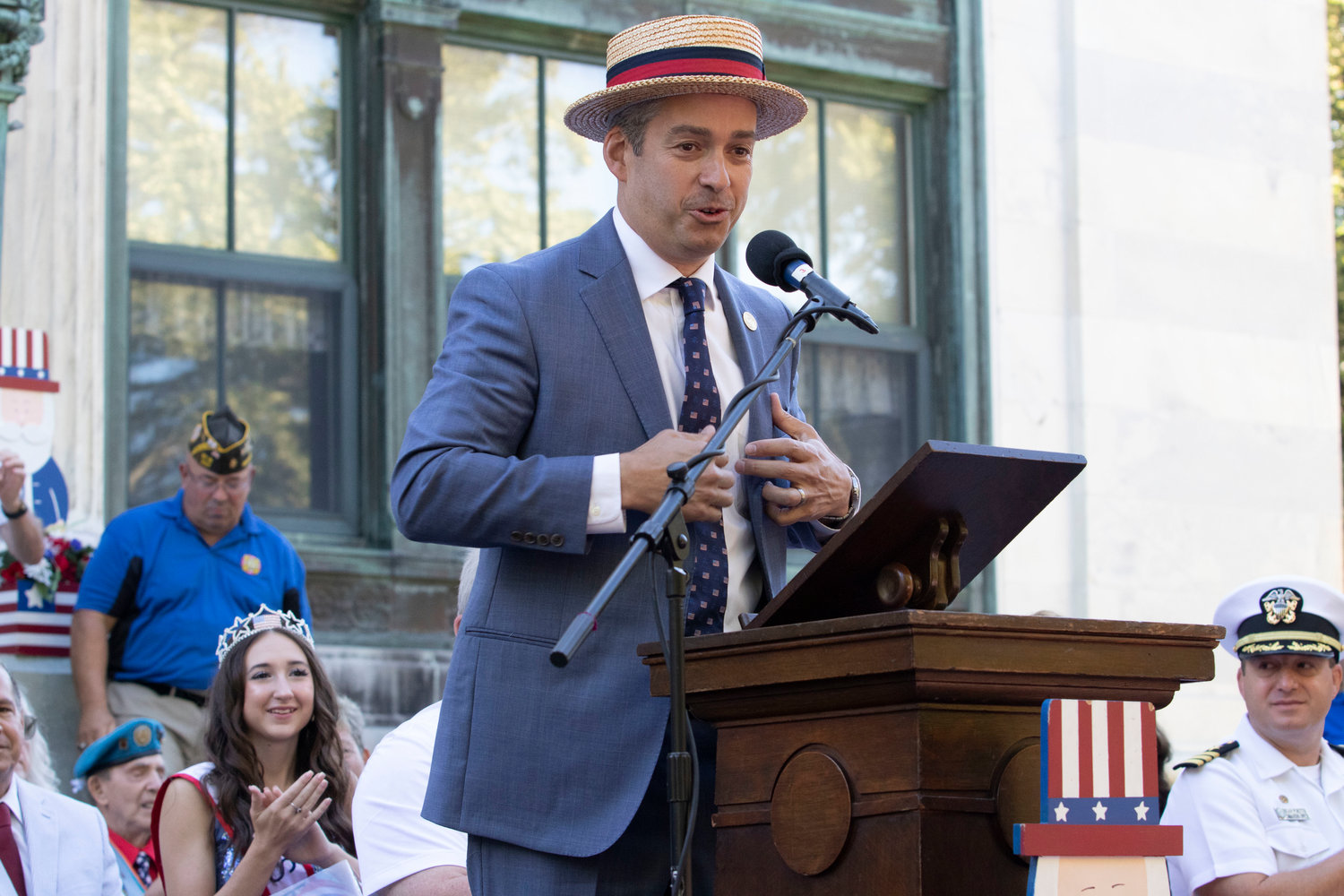 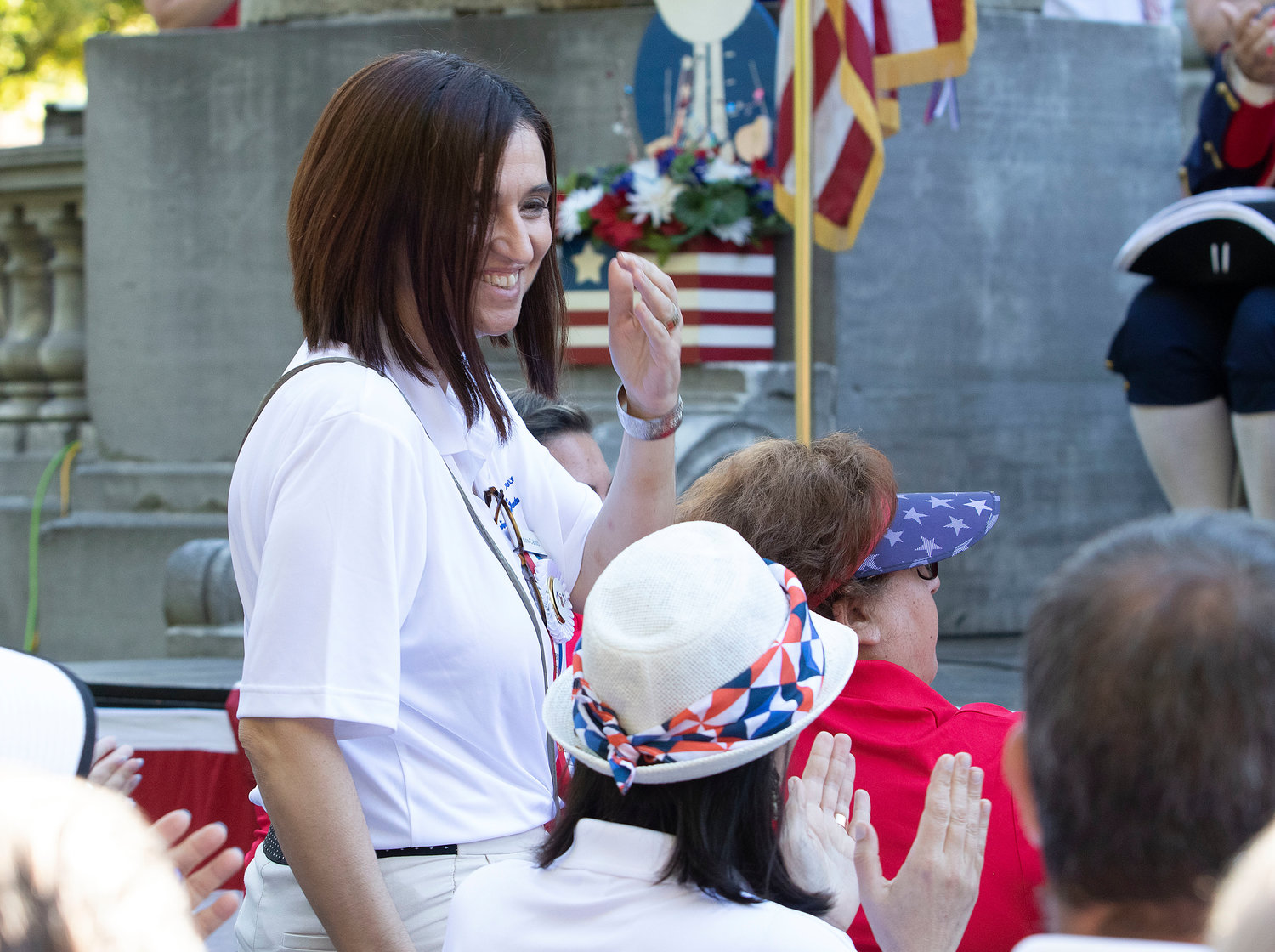 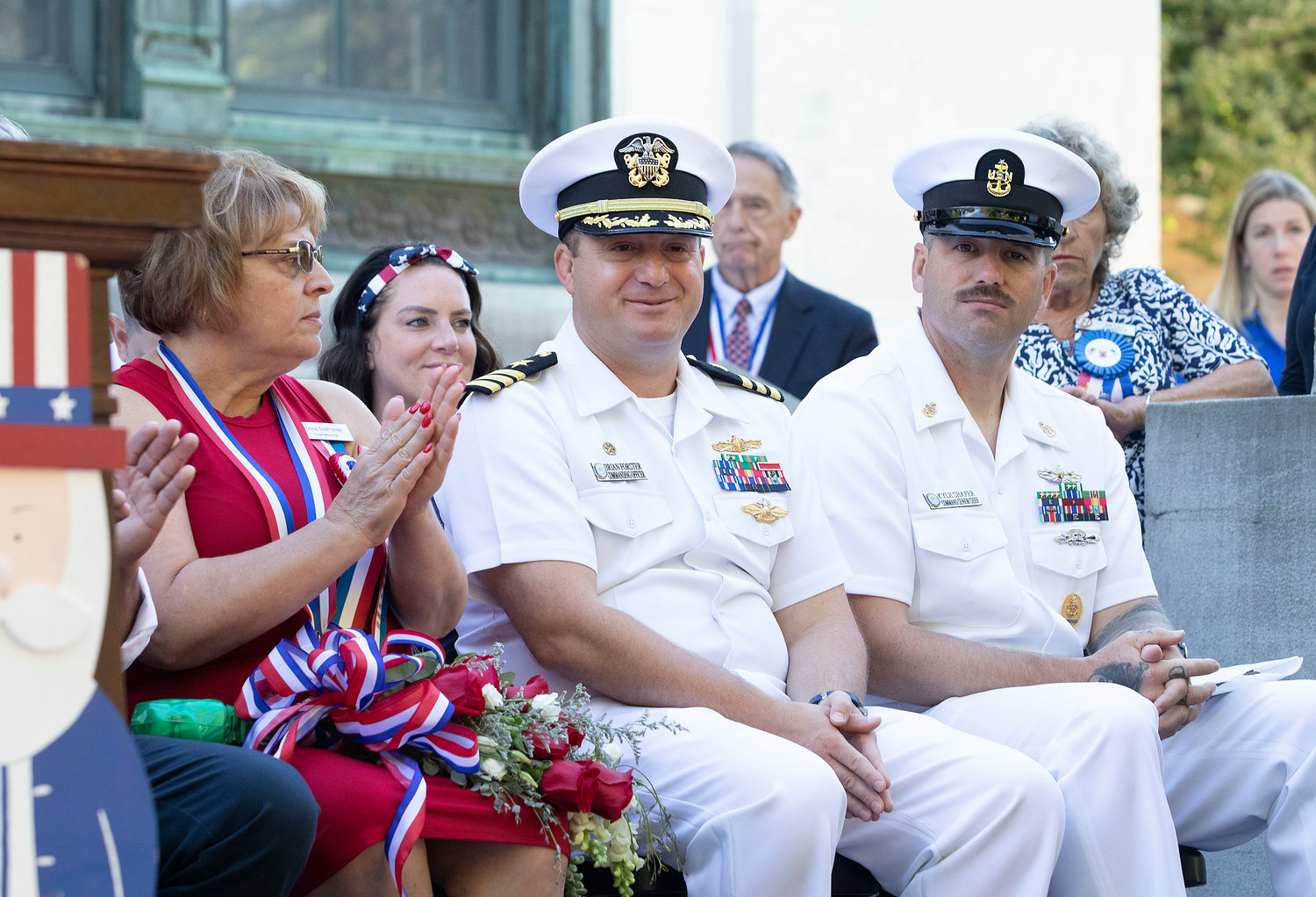 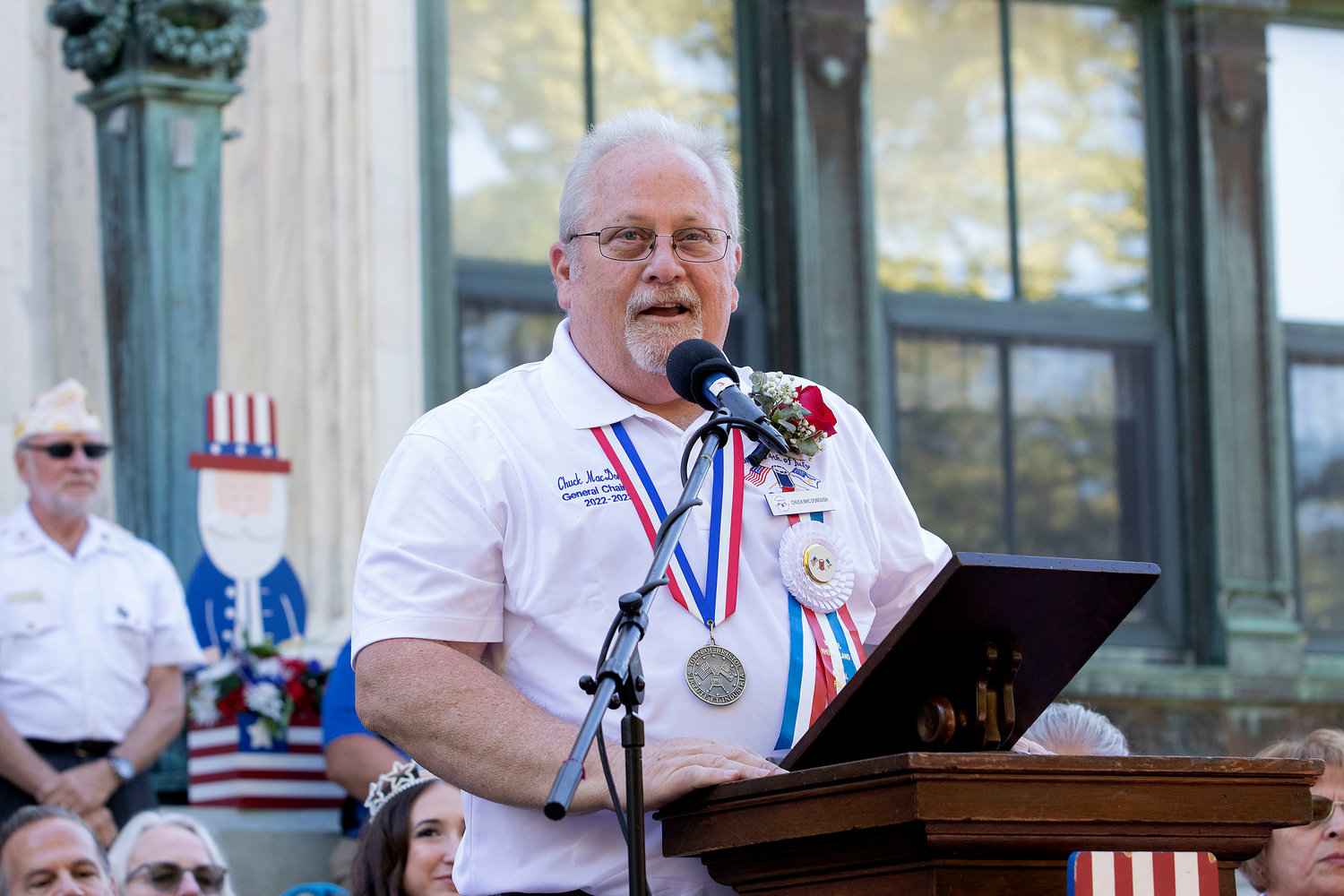 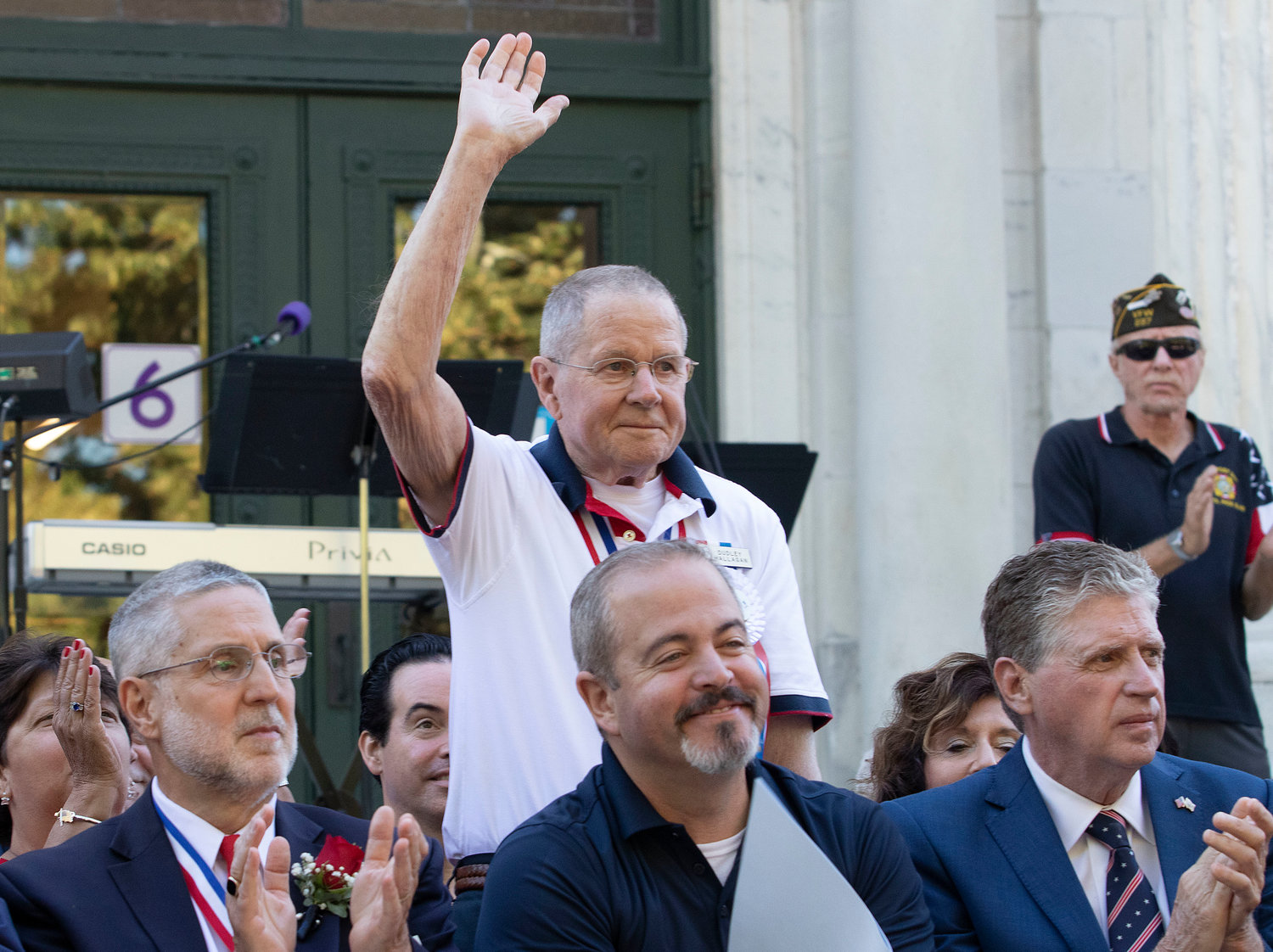 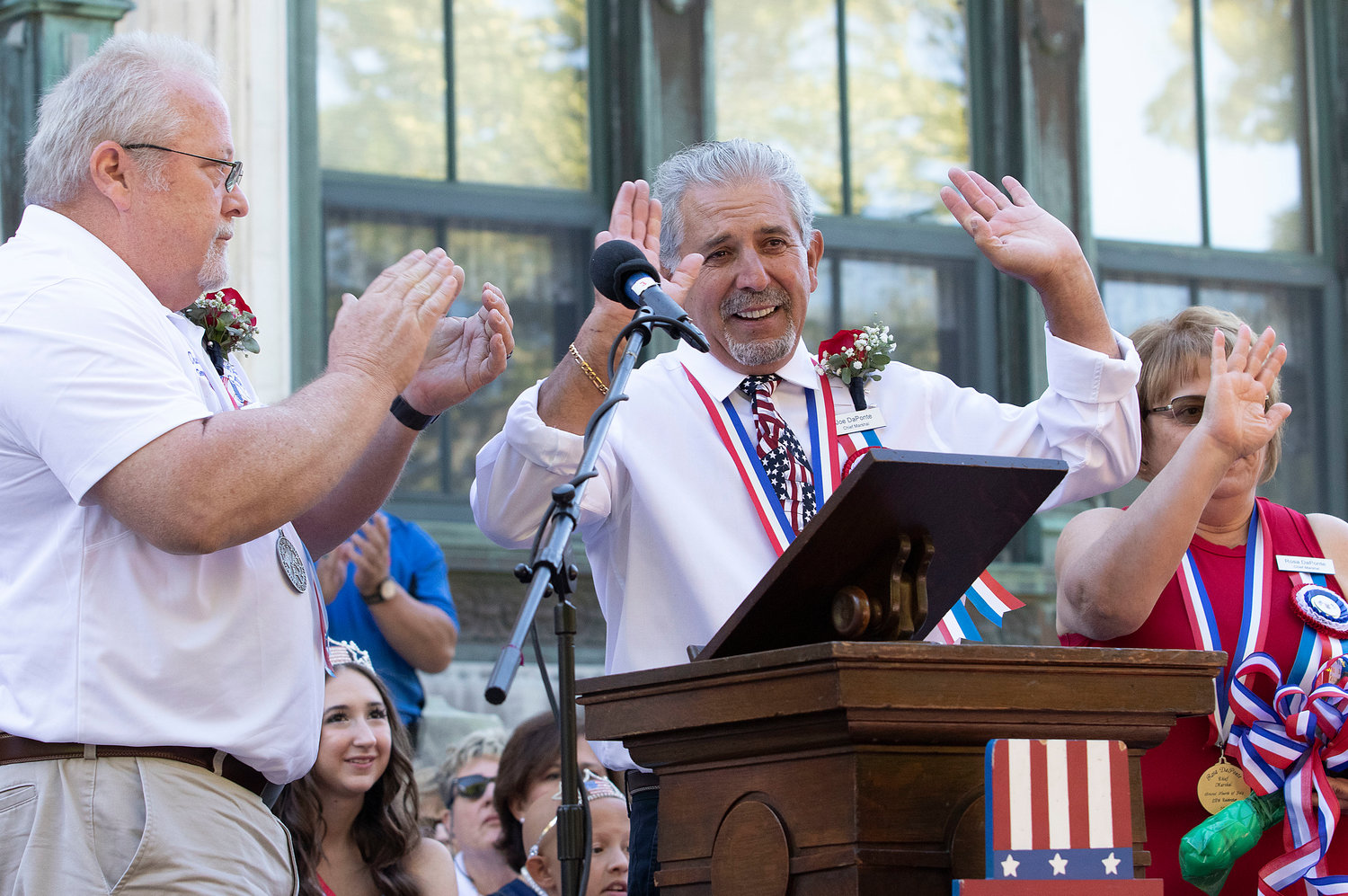 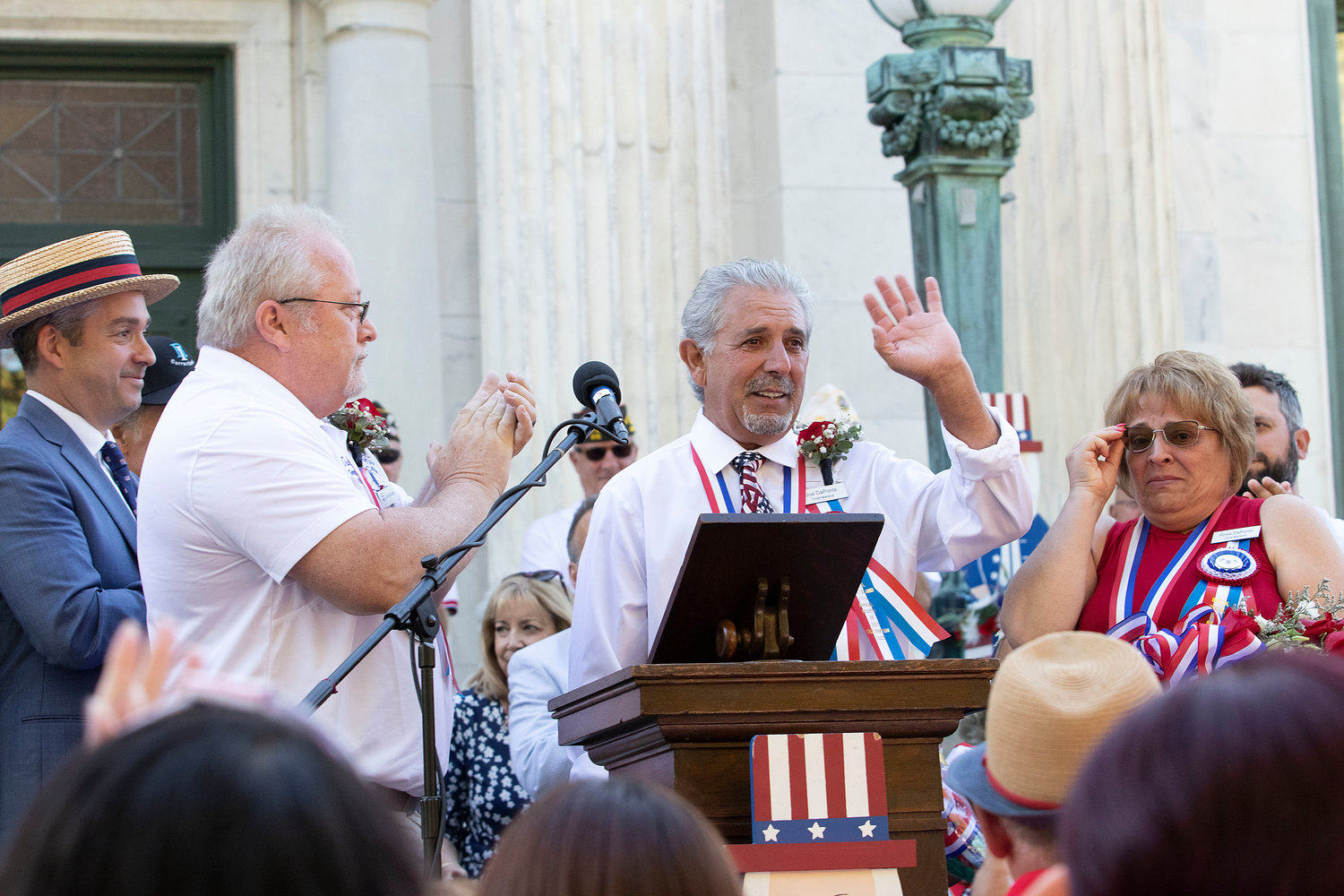 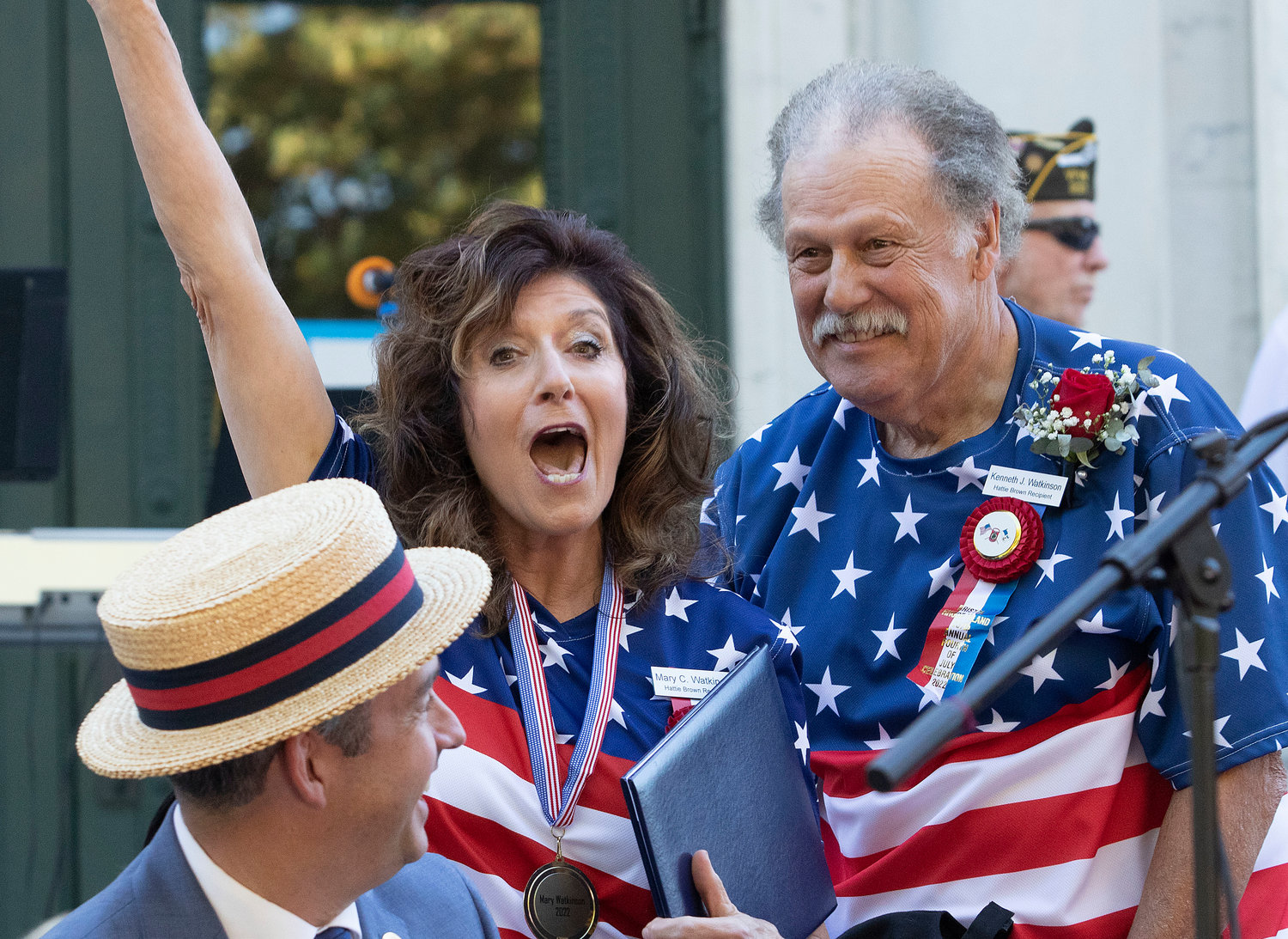 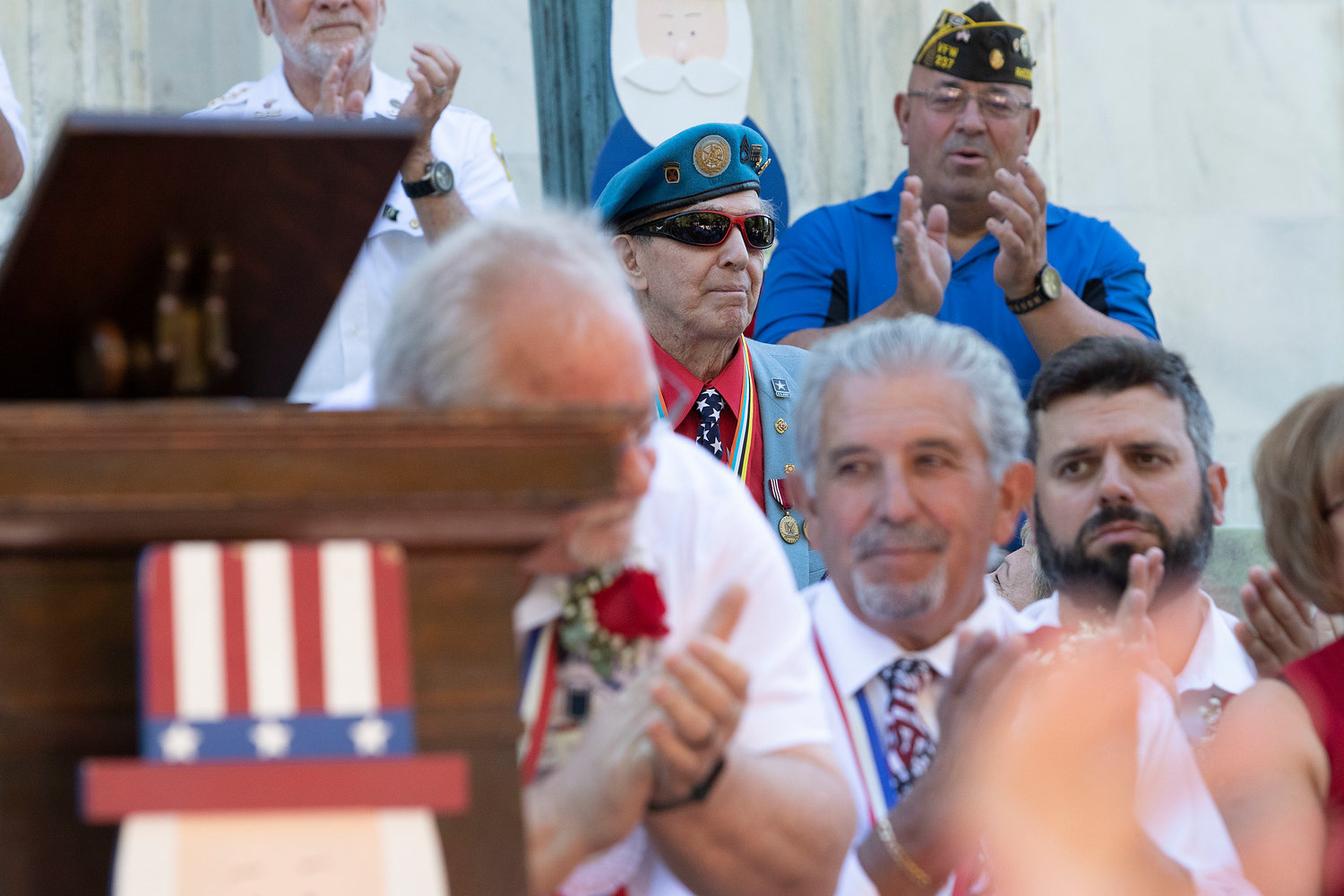 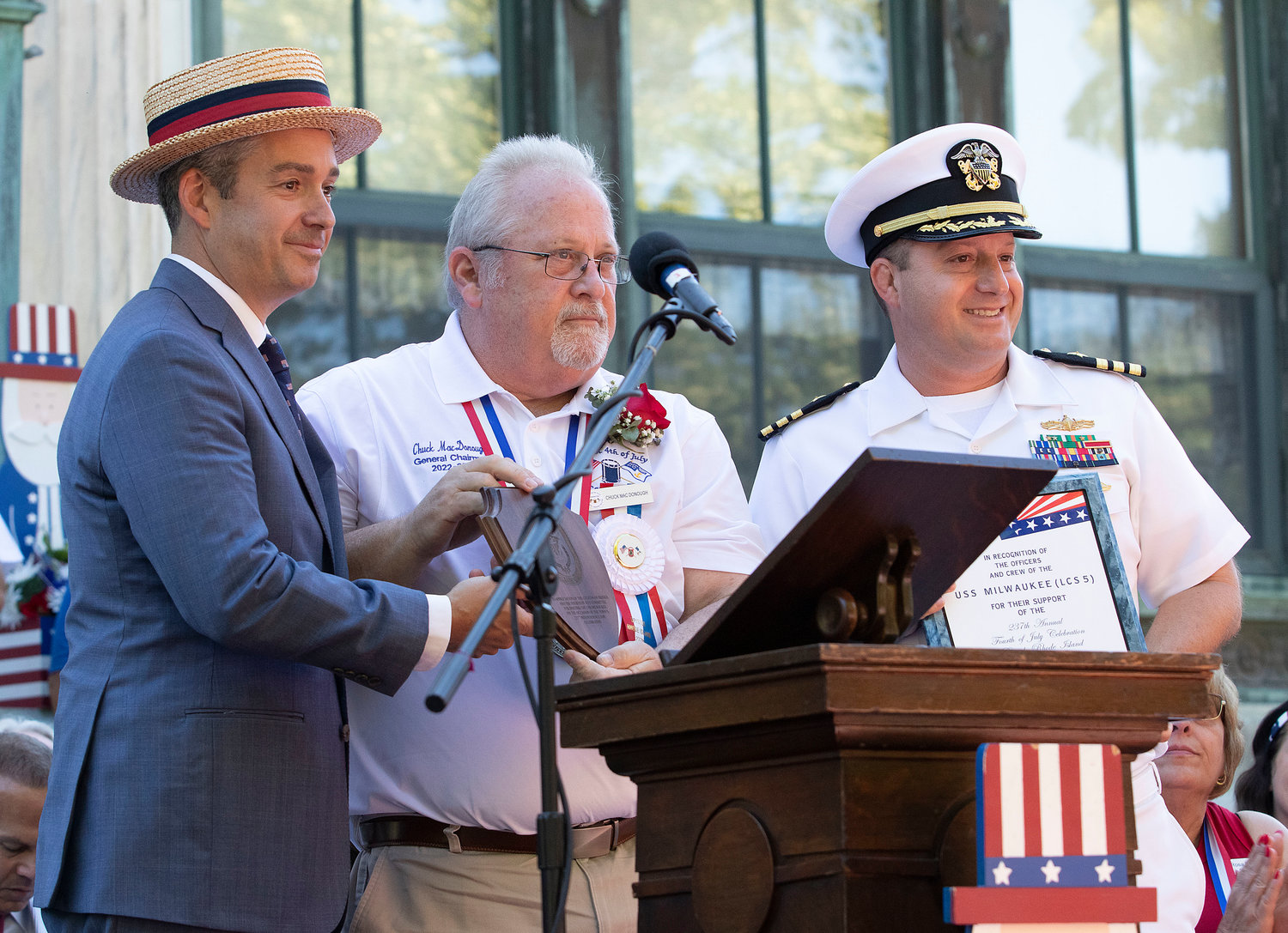 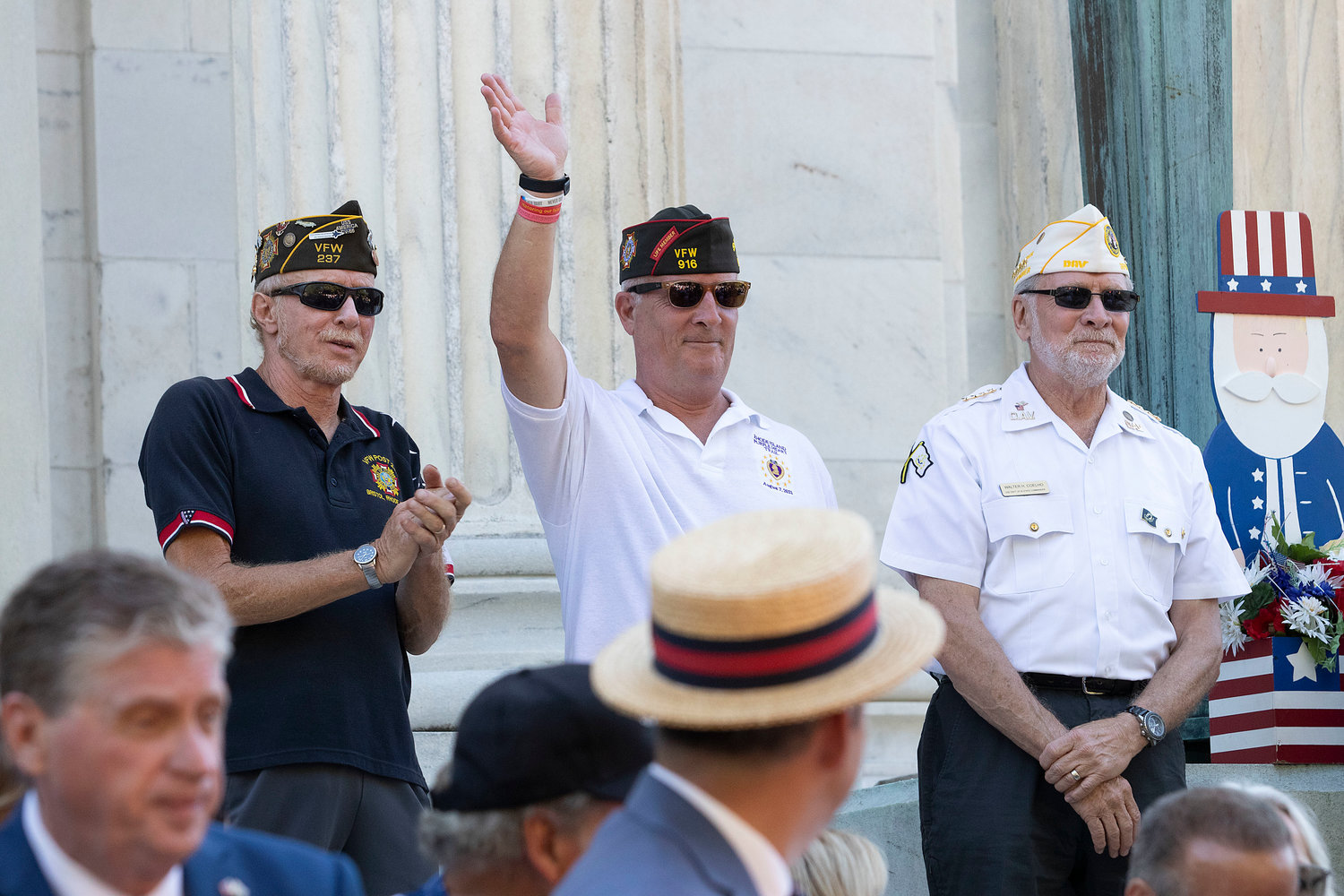 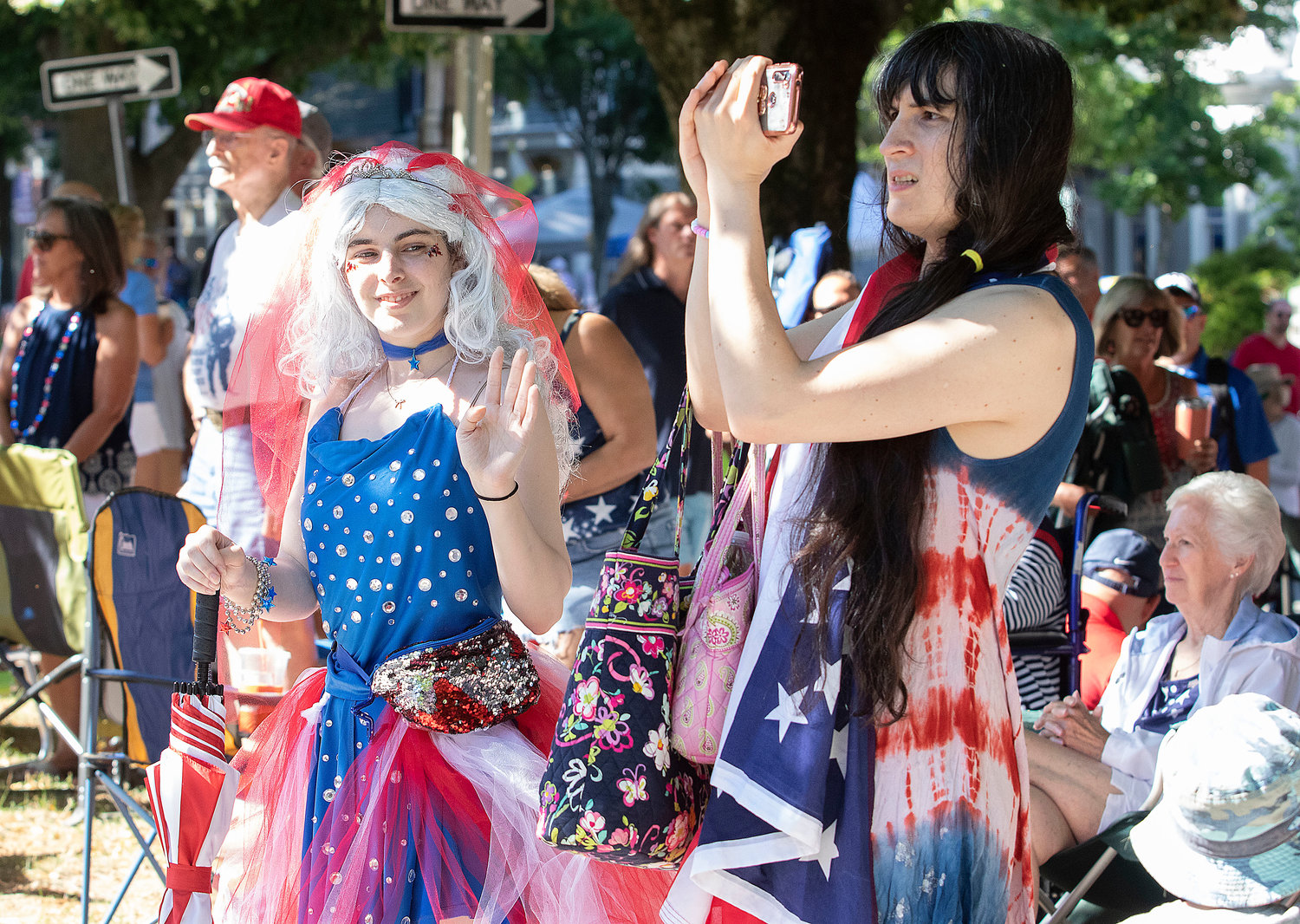 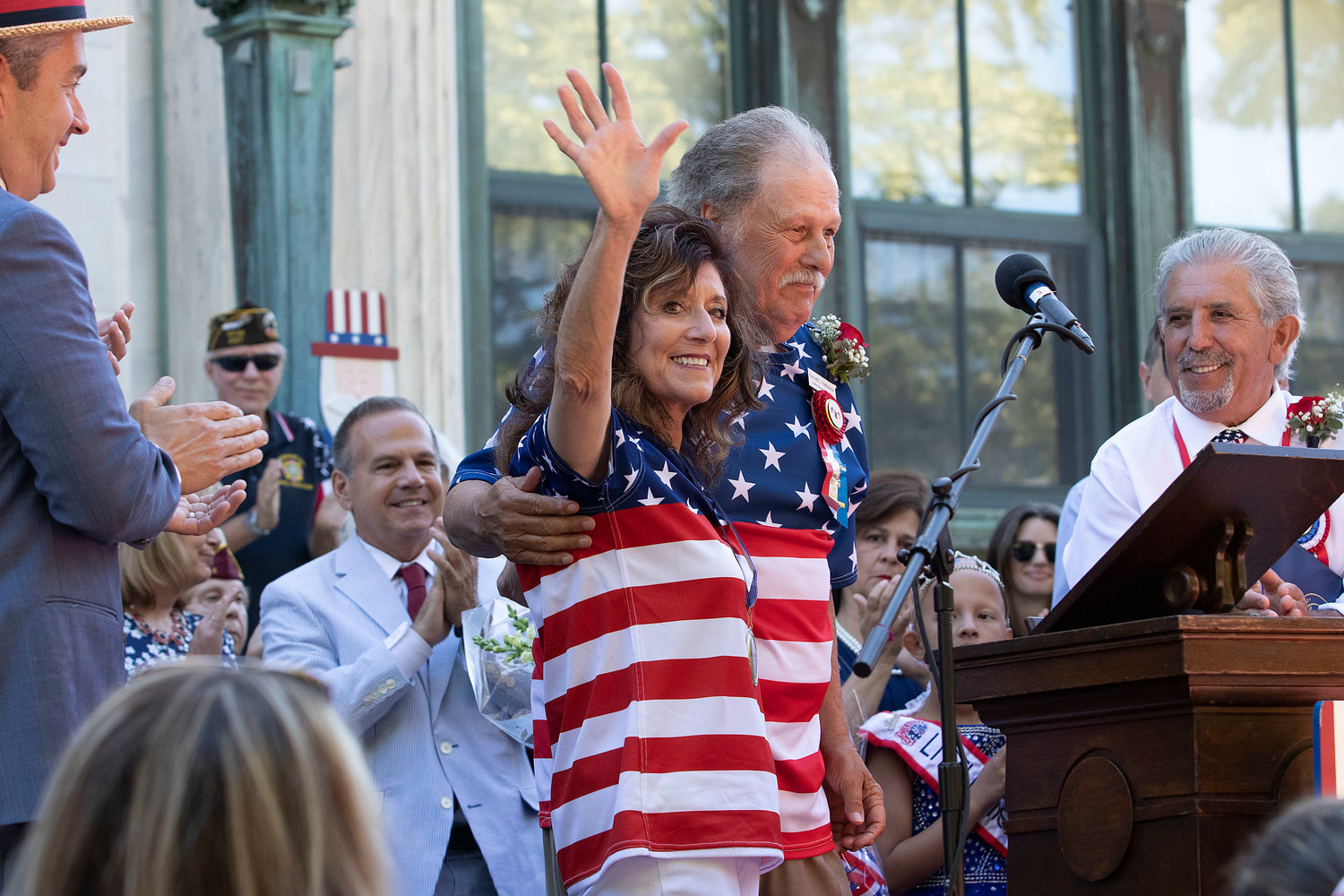 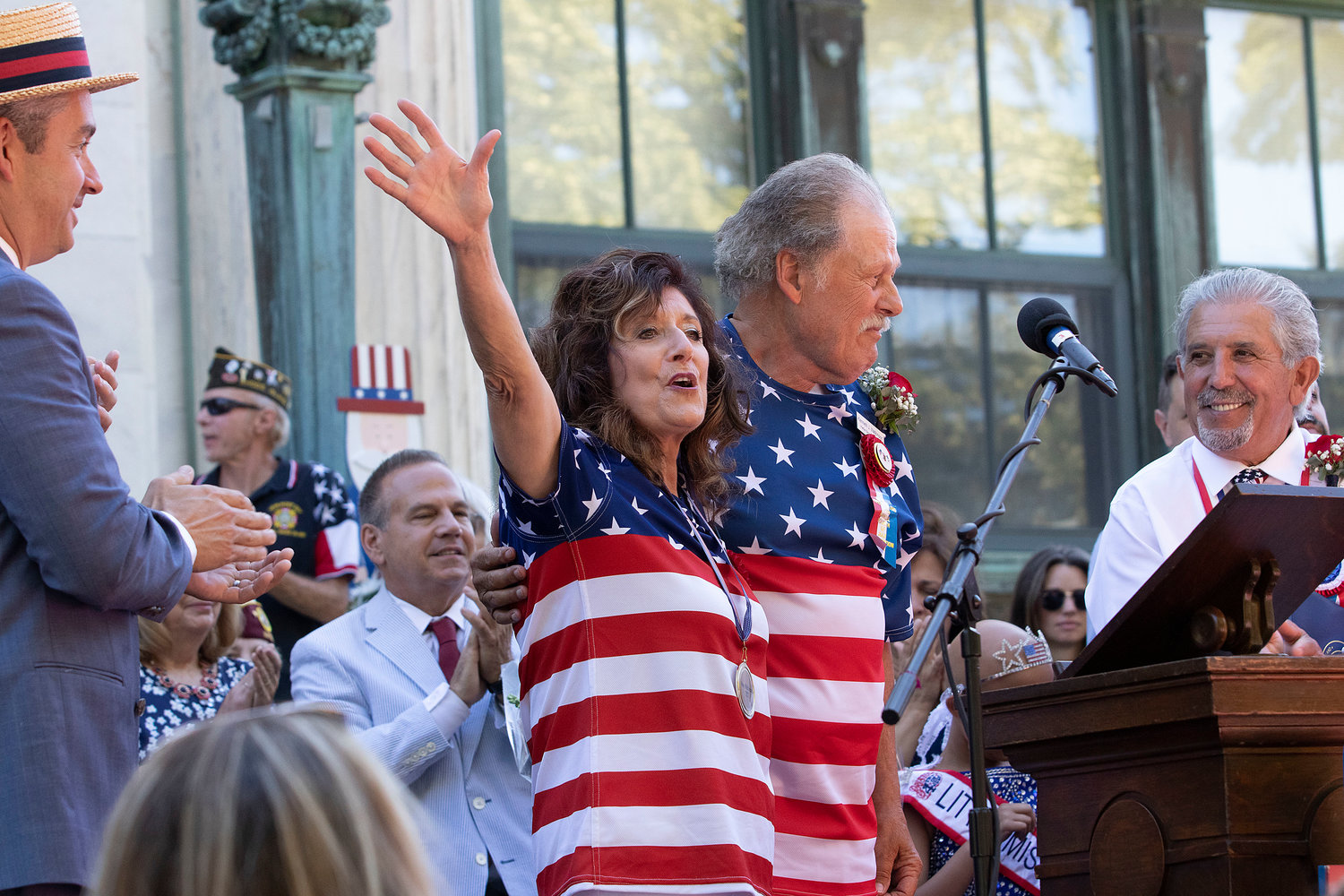 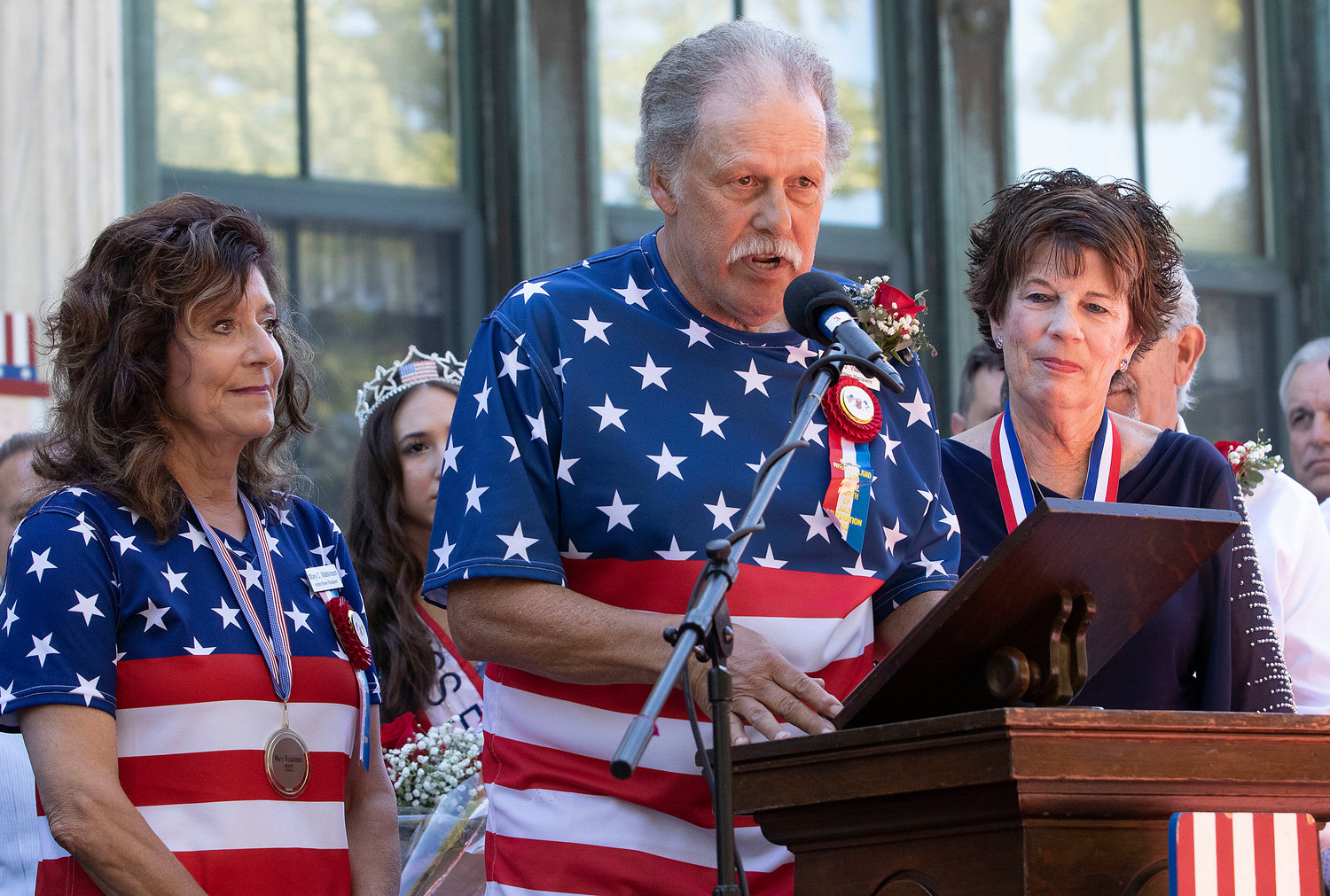 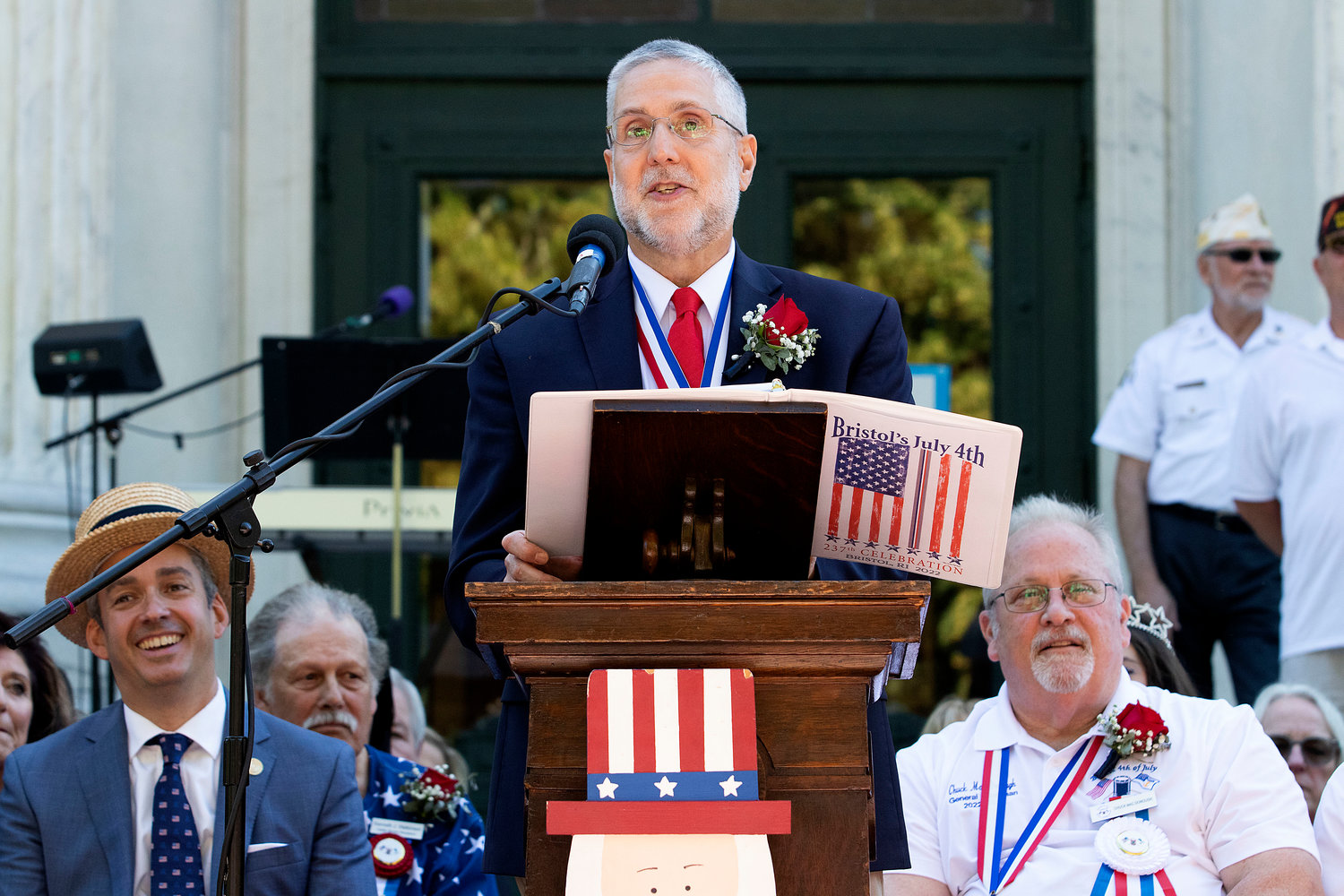 As they have for nearly 240 years now, the Patriotic Exercises kicked off the 4th of July festivities on Monday. Under brilliant blue skies, our flag was honored, patriotic songs performed, and dignitaries were introduced.

One of the highlights of the hour was the introduction and loud ovation for Sergeant First Class Thomas Dailey, a 93-year-old Korean War veteran who survived the battle of the Chosun Reservoir in North Korea.

Ken and Mary Watkinson, whose outstanding record of volunteerism earned them the Hattie Brown award, were honored as well.

“I was fortunate to know and work with Hattie on the Fourth of July committee,” said longtime Committee member Dick DeVault. “And I know she would be delighted that they are receiving her award, because they certainly exemplify everything the award stands for.”

Ken is a lifelong Bristolian who graduated from Bristol High School in 1968, and is retired from his company, Watkinson’s Automotive. Mary was born in Villa Franca, St. Miguel, and emigrated to the U.S. as a child. The first in her family to graduate from high school, Mary returned to school later in life, and in 2001, at the age of 50, she became a registered nurse. She has been a nurse at Beacon Hospice for 18 years.

Though their resume of volunteerism and community service is long, it is their work with Haiti’s Child that they say has been the most rewarding of their lives. Called to serve in Haiti when they were horrified by the impact of the devastating earthquake that hit in January of 2010, they joined the team at Haiti’s Child, which runs a school for 250 children. They fundraise to support the school, organize a mobile clinic in Haiti annually, and support an orphanage run by a pastor who brings in children living on the streets. Locally, when Covid prevented them from traveling to Haiti, they became involved with efforts to serve the homeless. According to Mary, most days she and Ken are either wiring money to Haiti, picking up items to sell for Haiti or working on their Haiti’s Child newsletter.

Longest traveled Bristolian
Angelo Antignano IV received a flag that has flown over the U.S. Capitol from Rep. David Cicilline in honor of his efforts to get home for the holiday.

Antignano, a 1996 graduate of Mt. Hope High School who earned a doctorate in geochemistry from UCLA in 2008, works for Exxon in Doha, Qatar. He and his family traveled 6550 miles to be here for the 4th. He was also given a plaque in memory of 1st Sgt. Andrew McKenna, who received this award seven years ago, and was killed in action in Afghanistan the following month.

The presentation was made by Master Sgt. Leo Sliney, a friend of McKenna’s. “He always talked about a celebration in his hometown here in Bristol,” said Sliney. “Now I see what he was talking about…The culture here in Bristol is second to none. America would be a much better place if there were more towns like yours.”

Patriotic Speaker delivers
During his years as Town Clerk, Lou Cirillo, this year’s Patriotic Speaker, was the man to see if you had a question about Bristol’s history. He still is, actually — though now that he’s retired from Town Hall, he’s not as easy to find. But it’s not surprising that his address deftly drew from Bristol’s storied past to explain a bit about why this celebration means so much to us today.

Noting that the best speeches have been personal, he spoke about us. “Us meaning we who spend our lives in this beautiful little peninsula known as Bristol, Rhode Island,” Cirillo said. “Personal in the sense that it is about each and every one of us, past and present, who have celebrated and continue to celebrate, like no others; Independence Day – our very special Fourth.”

Evoking Scripture that tells how affliction can least to positives like endurance, character, and hope, he said.

“Since the inception of our country, the American spirit has been generated and regenerated by things that are difficult – and surviving and embracing of those difficulties have made us stronger as both a nation and as individuals.”

He asked why of all the towns in this nation, it should be Bristol that embraces this celebration like no other. He has a hypothesis, and its roots go all the way back to the Revolution — and the two violent attacks inflicted on our little town by British forces.

The first time, in October 1775, three British warships fired on the town for about 90 minutes, until the town leaders gave the British a ransom of livestock.

“The British withdrew leaving behind damaged houses and horribly terrified inhabitants,” said Cirillo. “Although townsfolk initially believed that no lives were lost during the attack, they soon learned that the Reverend John Burt, the beloved, yet frail, pastor of the First Congregational Church was found dead in a field of ripened corn.” Burt, it was determined, did not die from cannon fire, but from distress.

The second time the British attacked, in May of 1778, they marched through the town, burning buildings and taking hostages. The first house to burn? That of the family of the late Reverend Burt — likely in retaliation for Burt’s support of the Revolution before his untimely death.

“I consider the mindset of those who lived here back then and saw their beautiful village ravaged by the horrors of war,” said Cirillo. “This deliberate assault on the peace they enjoyed must have been unspeakable.”

After the war, displaced families returned and in 1785 Henry Wight came to Bristol and replaced Revered Burt as the pastor of the First Congregational Church. According to Cirillo, these Bristolians rallied around their new minister — and when he determined to formalize a celebration of Independence Day, the community embraced it.

“My earlier statements represent a theory,” said Cirillo. “But theory or not, the Fourth of July Celebration in the little Town of Bristol, Rhode Island is one owing itself to strong, solid, traditions, a commonality of community spirit, and an unparalleled sense of patriotism.

“We celebrate this day full knowing of the difficulties and sacrifice faced by our forebears, with the ardent hope that our Nation will continue to endure, and with this hope, we shall never be disappointed.”