Across the country, many large police departments are shorthanded, struggling to both recruit and retain officers. The Bristol Police Department just hired two officers to fill its only two … 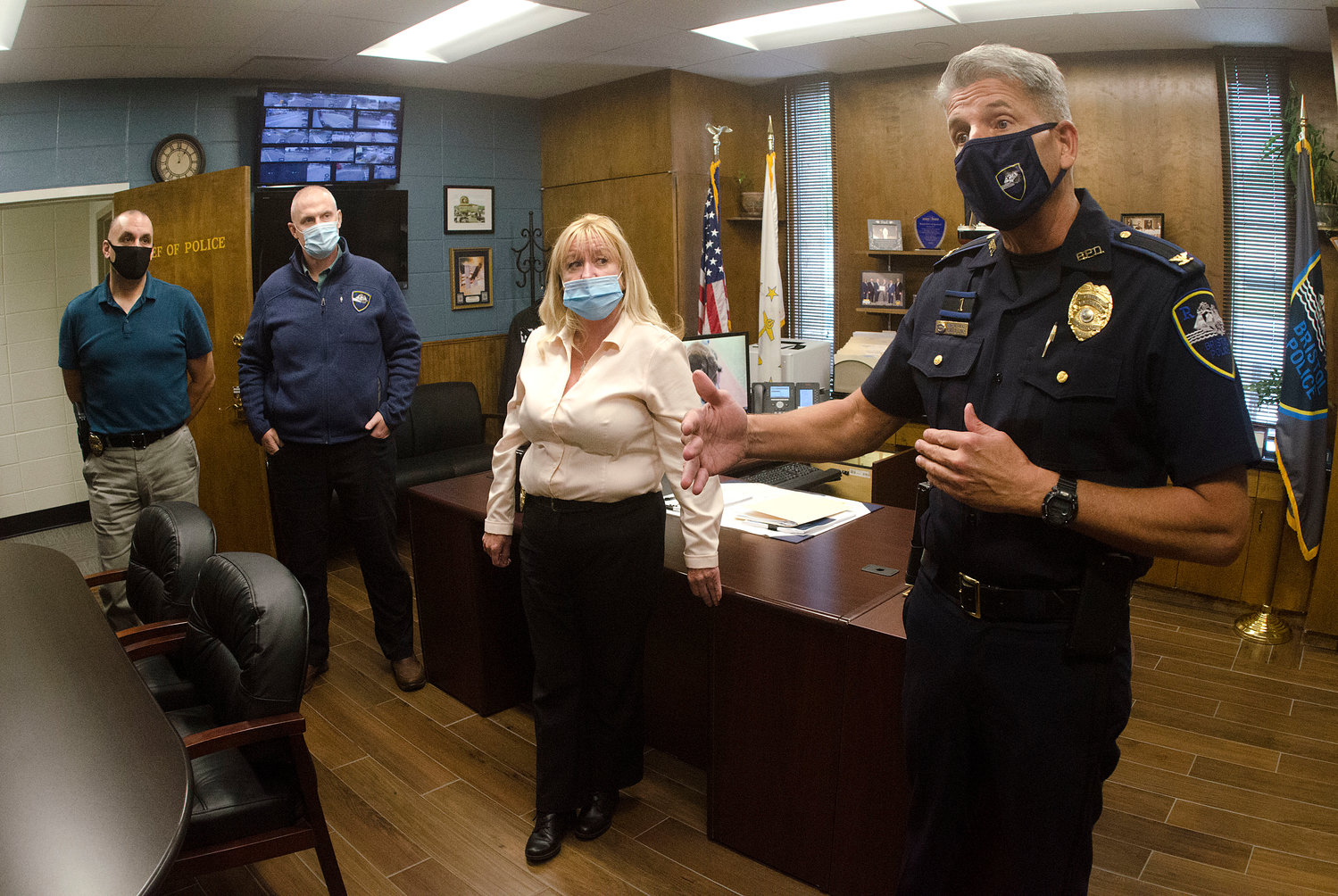 Ptlm. George Lefebvre, Det. Adam Clifford, Det. Julie Veader and Chief Kevin Lynch (left to right) discuss the reallocation of staff resources to work on cold cases — a strategy to both keep officers fresh and engaged, and to fill downtime during the pandemic. 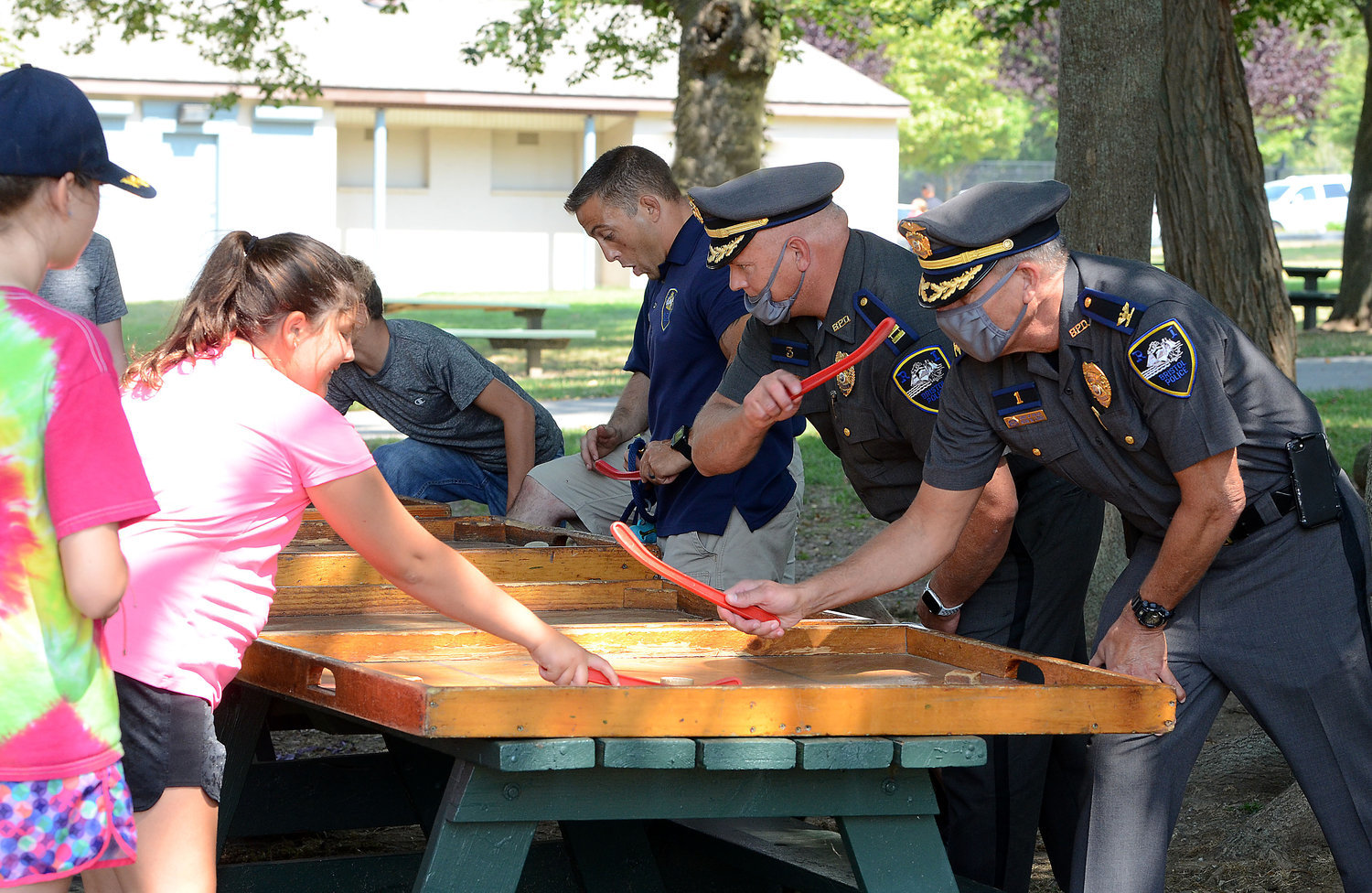 Bristol patrol officer Keith Medeiros (left), Captain Scott McNally and Chief Kevin Lynch play knock hockey with campers during the department’s “Youth Leadership Camp,” which they host for a week in the summer. Community engagement is one of the calling cards of the department. 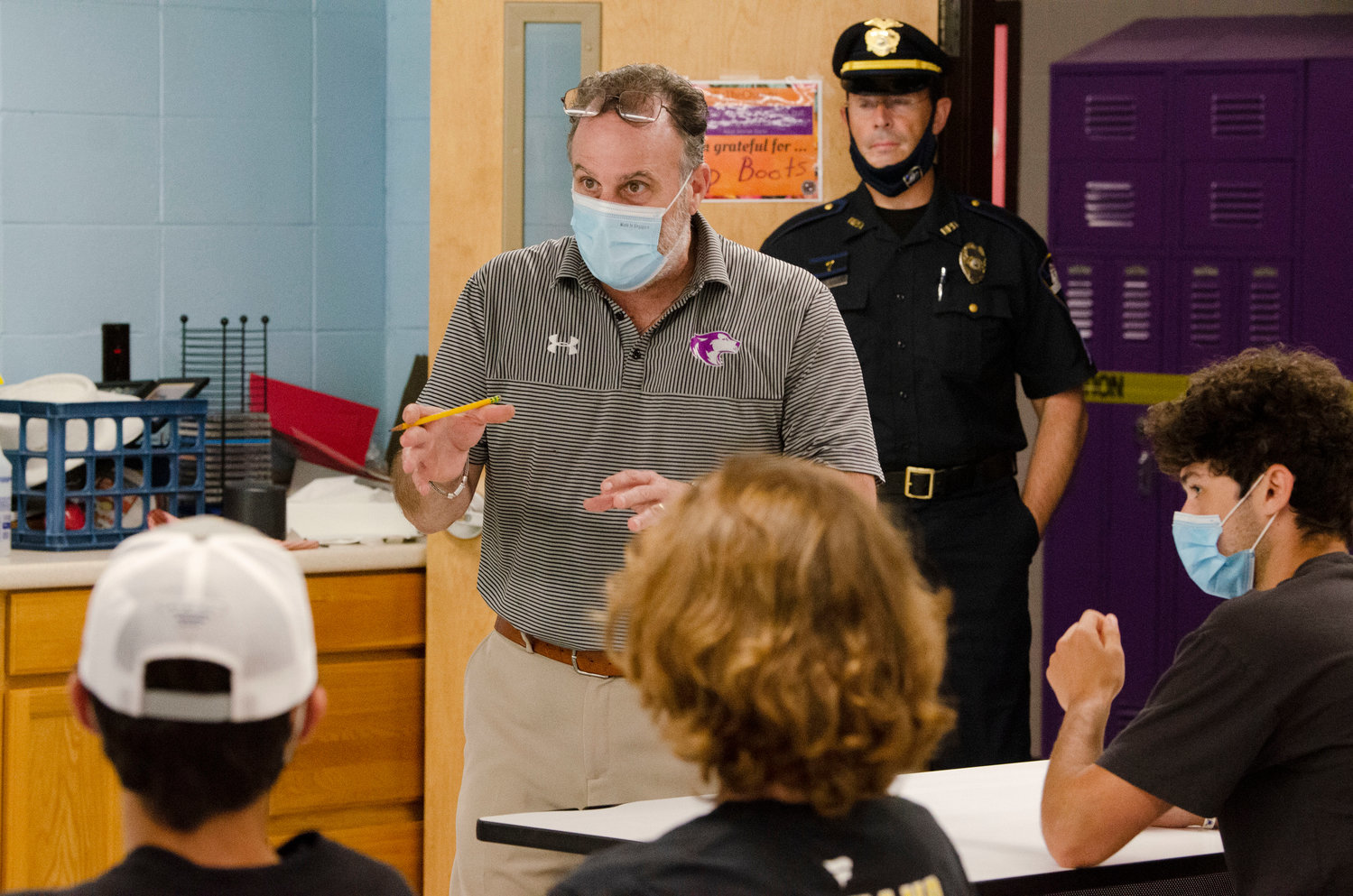 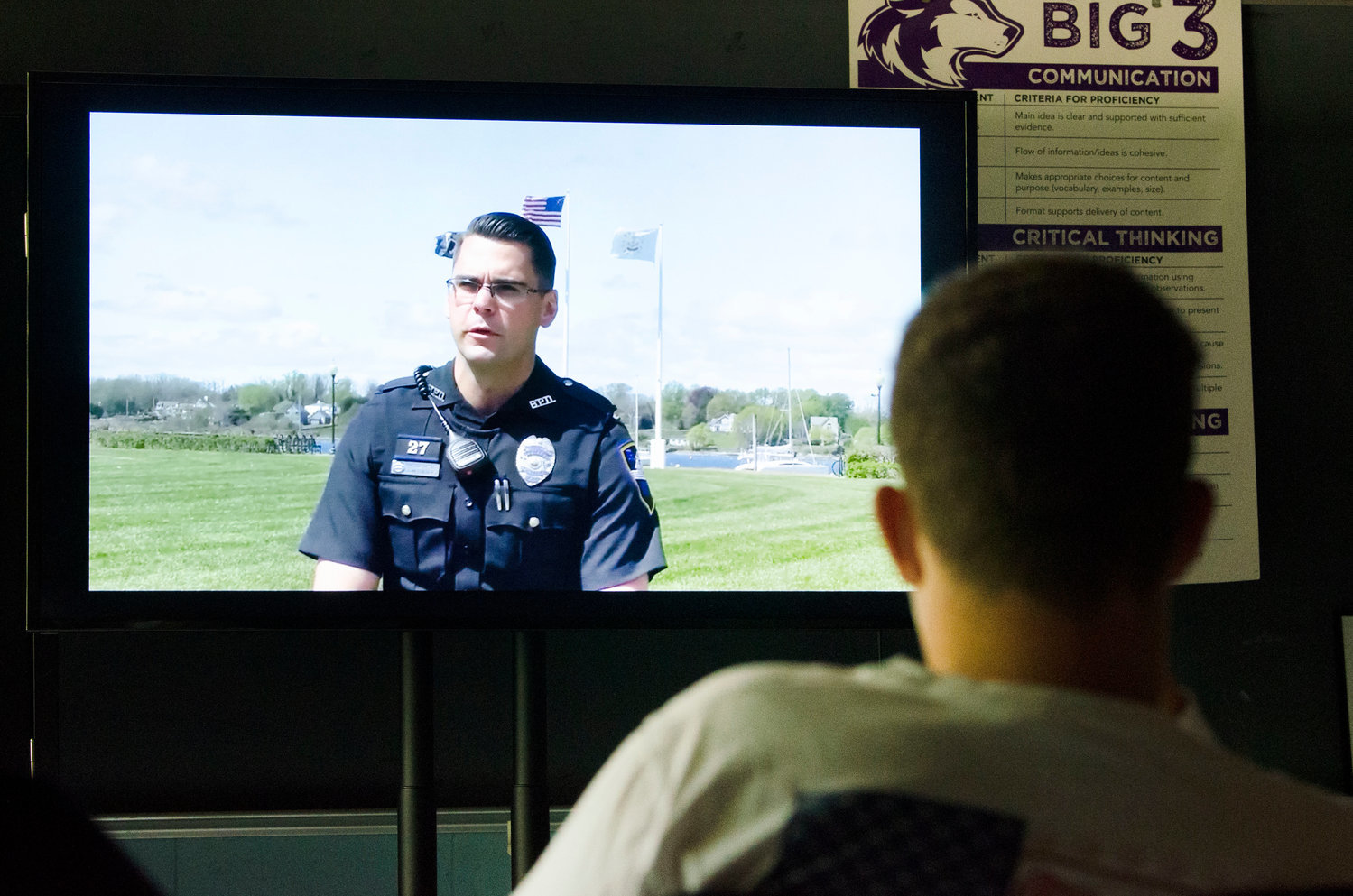 Mt. Hope students watch the world premiere of their Bristol Police Department recruitment video in the spring of 2021. The video was featured throughout the department's recruitment campaign, including at a Bristol Police table during the Bristol Fourth of July concert series.
Previous Next
Posted Thursday, October 7, 2021 7:00 am
By Scott Pickering

Across the country, many large police departments are shorthanded, struggling to both recruit and retain officers. The Bristol Police Department just hired two officers to fill its only two vacancies. But that’s not the remarkable part.

The remarkable part is that they had 152 applicants for those two jobs.

Using a combination of hard work and modern technologies, Bristol Police staged their most successful recruitment campaign in a generation, pulling in 152 applicants at a time when small, suburban departments typically struggle to attract a couple dozen applicants.

According to Sgt. Ricardo Mourato, who directed Bristol’s most recent campaign, the previous two recruitment campaigns attracted 30 to 40 applicants. In contrast, this applicant pool started at 152, narrowed to about 90 who took part in an orientation meeting, more than 80 who showed up for the department’s agility test, and then 23 who were invited to interview.

How did they run such a successful campaign and attract so many applicants at a time when perceptions of law enforcement aren’t what they used to be? A better question is, how didn’t they?

Meet them where they are

The first thing they did was deploy a new technology, a mobile app for organizing the entire recruitment process. Using the app as a hub, the department advertised the two jobs and posted information about the department and the community.

The app is free to Bristol Police, while applicants each paid a $25 fee to enroll in the program. Sgt. Mourato and Major Brian Burke say the app was a game-changer. Instead of stuffing envelopes and mailing out notices, they simply clicked a few buttons and posted. Instead of spending hours calling to schedule interviews, they posted time slots and applicants self-selected.

Bristol Police also used a QR code on every form of advertising possible. Scanned by a cell phone, the QR code leads directly to the Bristol Police application site.

“We’re catching up to the technology of the millennial generation. They apply to jobs through apps,” said Bristol Police Chief Kevin Lynch

The next part of the strategy was a broad-based recruitment effort. The department used every tactic it could think of.

Sgt. Mourato attended a handful of job fairs. The department printed a large banner, featuring the application QR code, that it moved around town for months. It spent a week in front of Roger Williams University, a week in front of Independent Park, and two weeks in front of Eskimo King in Swansea.

They advertised the jobs in all of the local newspapers, on Latino radio, with the NAACP, through a New England police email database, and anywhere and everywhere they could.

“We went to every single gym we could think of,” said Sgt. Mourato. They posted flyers in Attleboro, Fall River and beyond. They sent notices to the career offices of every college or university in the region. They even called the Black Lives Matter organization to let them know about the openings.

“Over the years, we’ve seen fewer and fewer applicants respond to our recruitment efforts. So reaching out and finding qualified and diverse candidates was our primary goal,” Major Burke said.

Their efforts worked. They not only received 152 applications in six weeks, 22 percent of them were minority candidates.

The department took another unique approach to this year’s recruitment process. They talked about the job itself.

In 2019, a national research firm released a study about police recruitment across the country. Part of the study was based on feedback from 20 police officers with less than five years of experience. The question was, what would you do to recruit officers?

“The answer was, ‘When you’re recruiting, showcase the police department for what you really do,’ said Major Burke. “In other words, don’t show police officers repelling from a helicopter or driving a special vehicle, if that’s not what you do day to day. New recruits want to see what the police department actually does, and so locally we can showcase our community policing efforts, which is what we do every day.”

The police department made another strategic decision when advertising these two positions. They removed the requirement that all applicants have at least an associate’s college degree.

“Nationwide, we’ve been seeing the same issue for the past eight years, where everyone has the same challenge — recruitment,” said Sgt. Mourato. “We wanted to widen the applicant pool for someone, for example, who might be in their early thirties and never thought about a career in law enforcement but has life skills and life experiences … It opened the doors to a lot of applicants, and some of them were highly qualified, even without the degree.”

In the end, however, that lower standard did not impact the final outcome. The department hired one candidate, a woman in her twenties, with a master’s degree, and a multilingual man in his thirties with a bachelor’s degree (see below more on the two new hires).

Everyone involved considers the recruitment process an overwhelming success. “We were shooting for 100 applications, and we far exceeded our expectations,” said Major Burke.

The two new recruits begin training at the state police academy in January, and they should begin working in town next summer.