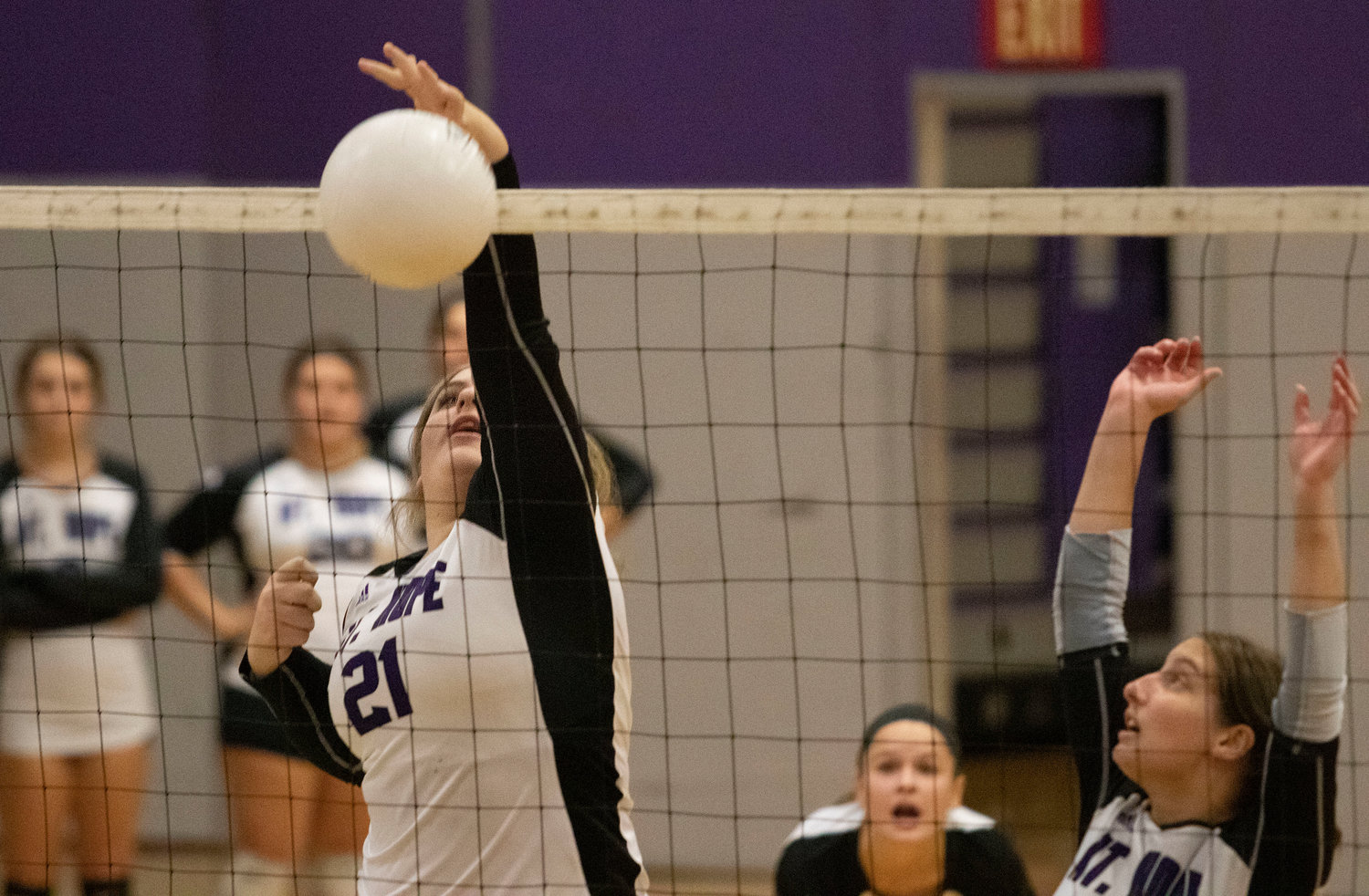 Freshman middle hitter Gianna Lunney drops the ball over the net for a point during the team’s win over North Smithfield on Friday night.
Photos by Richard W. Dionne, Jr. 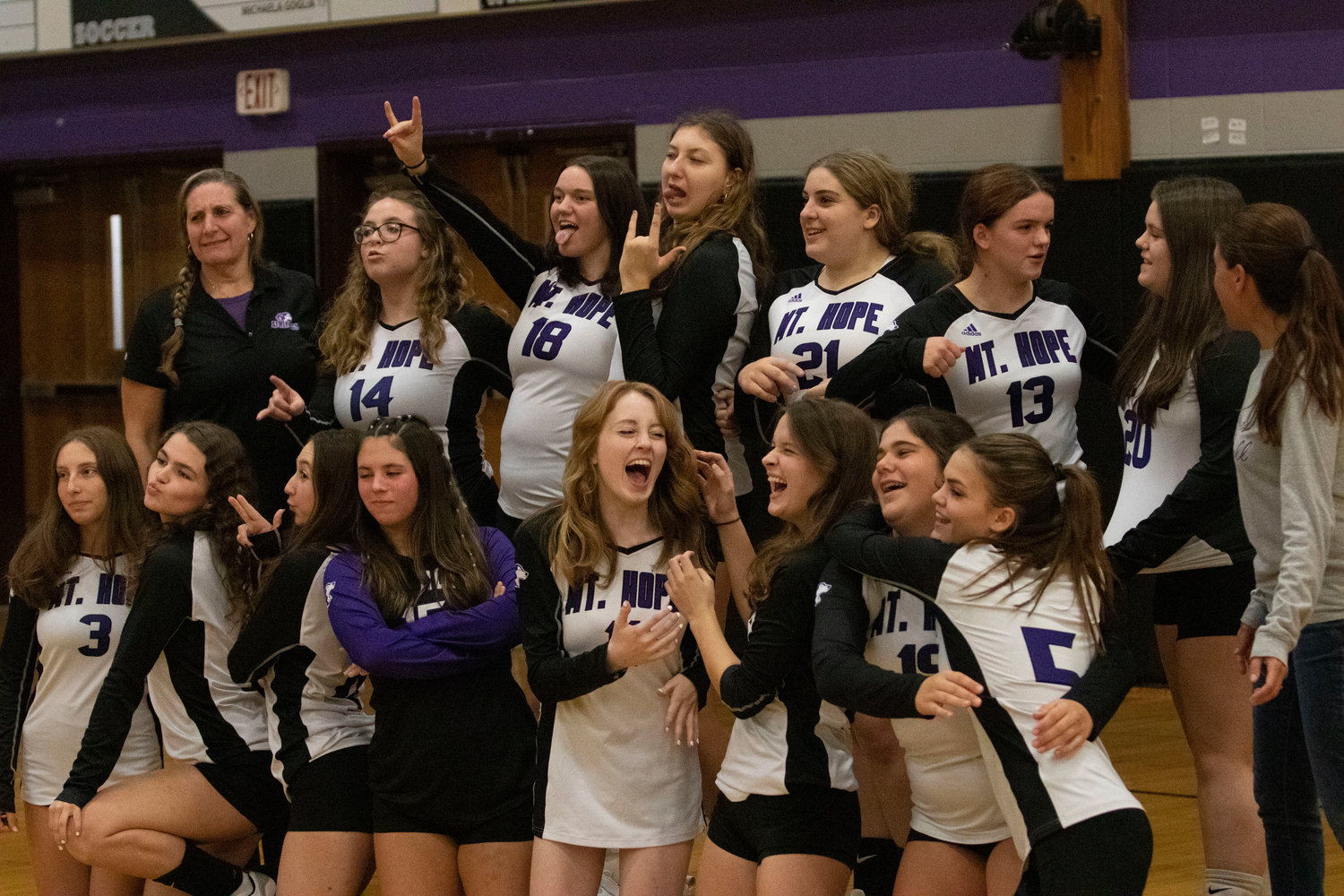 The team poses for a goofy group photo before the game with Mare Studios. 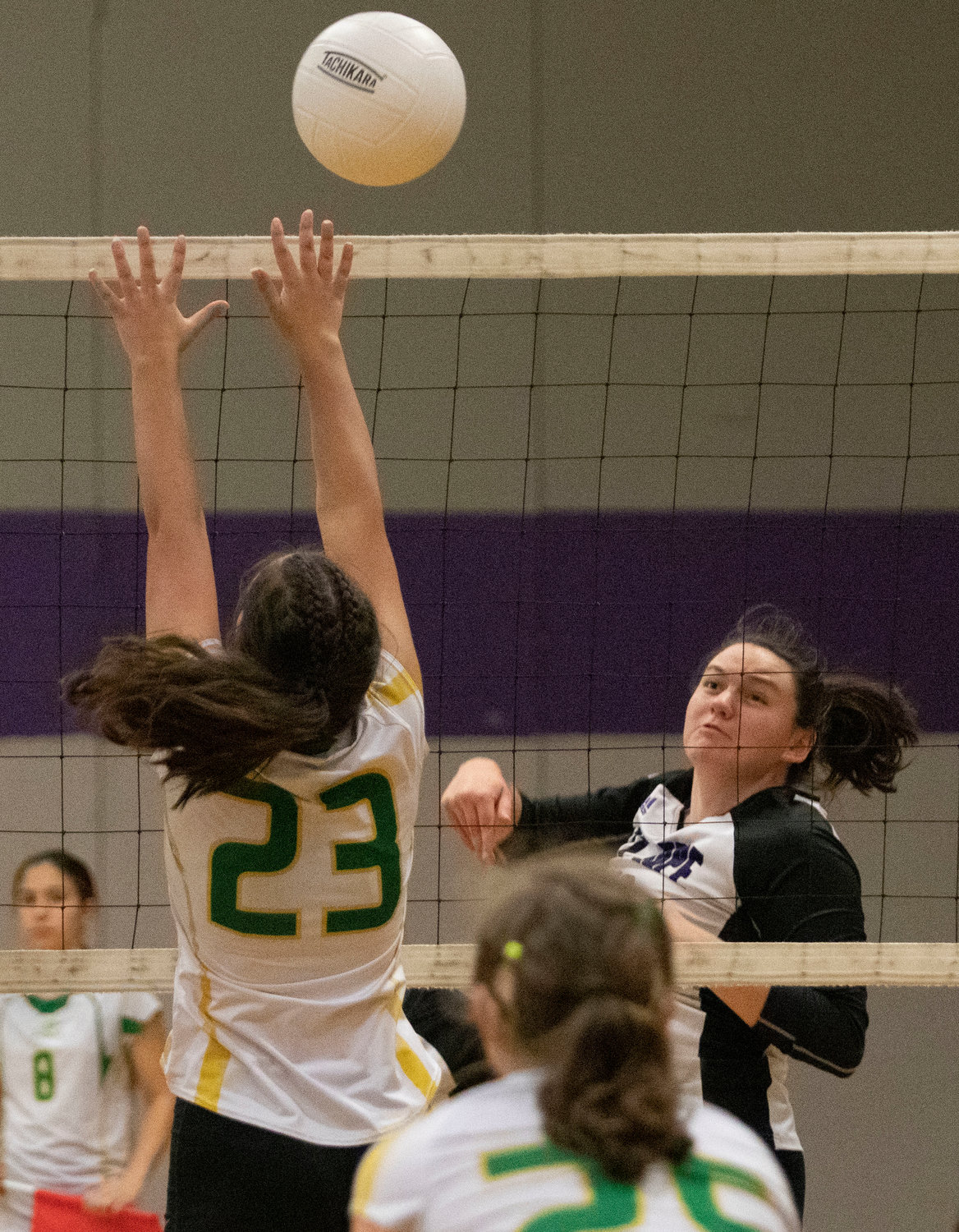 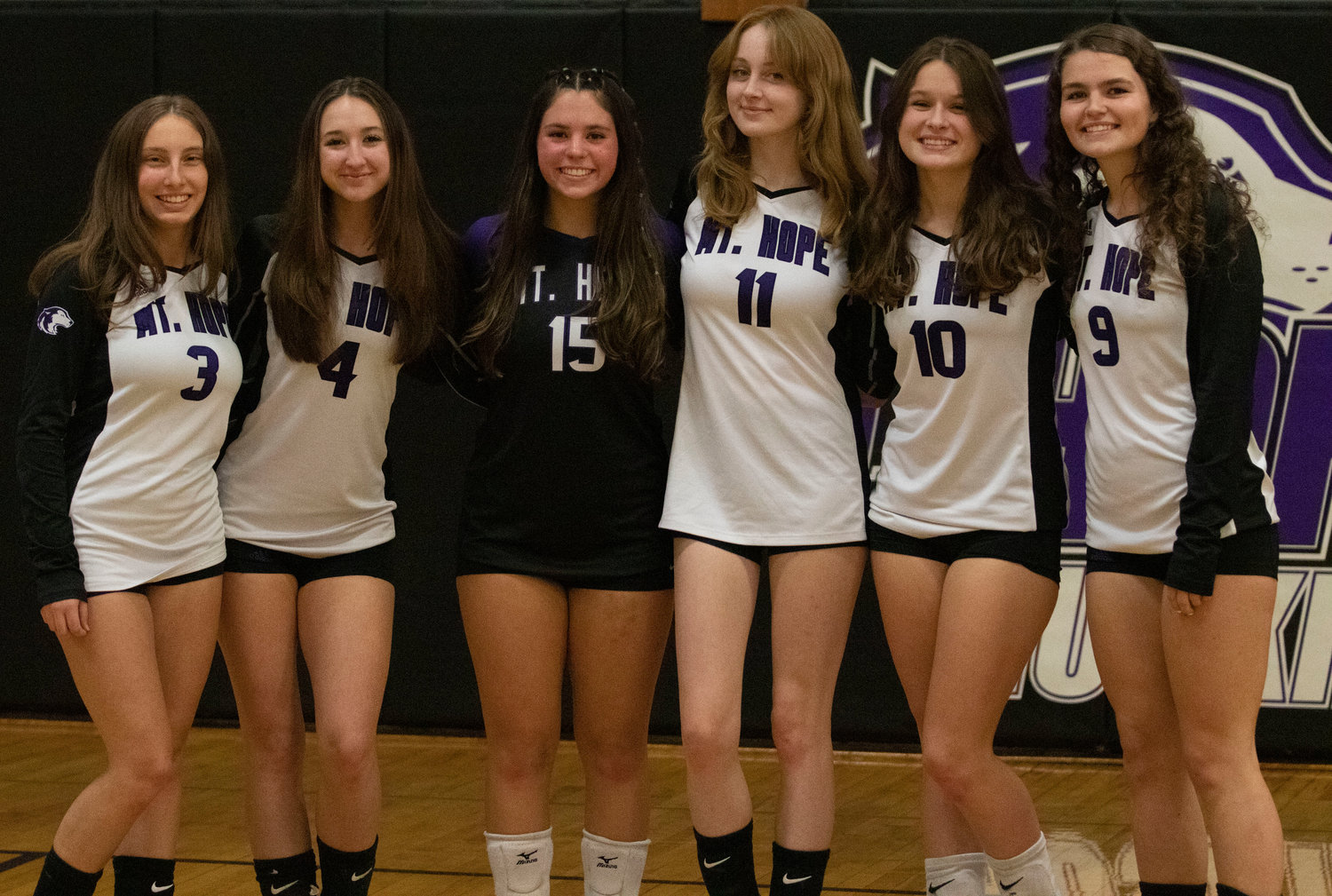 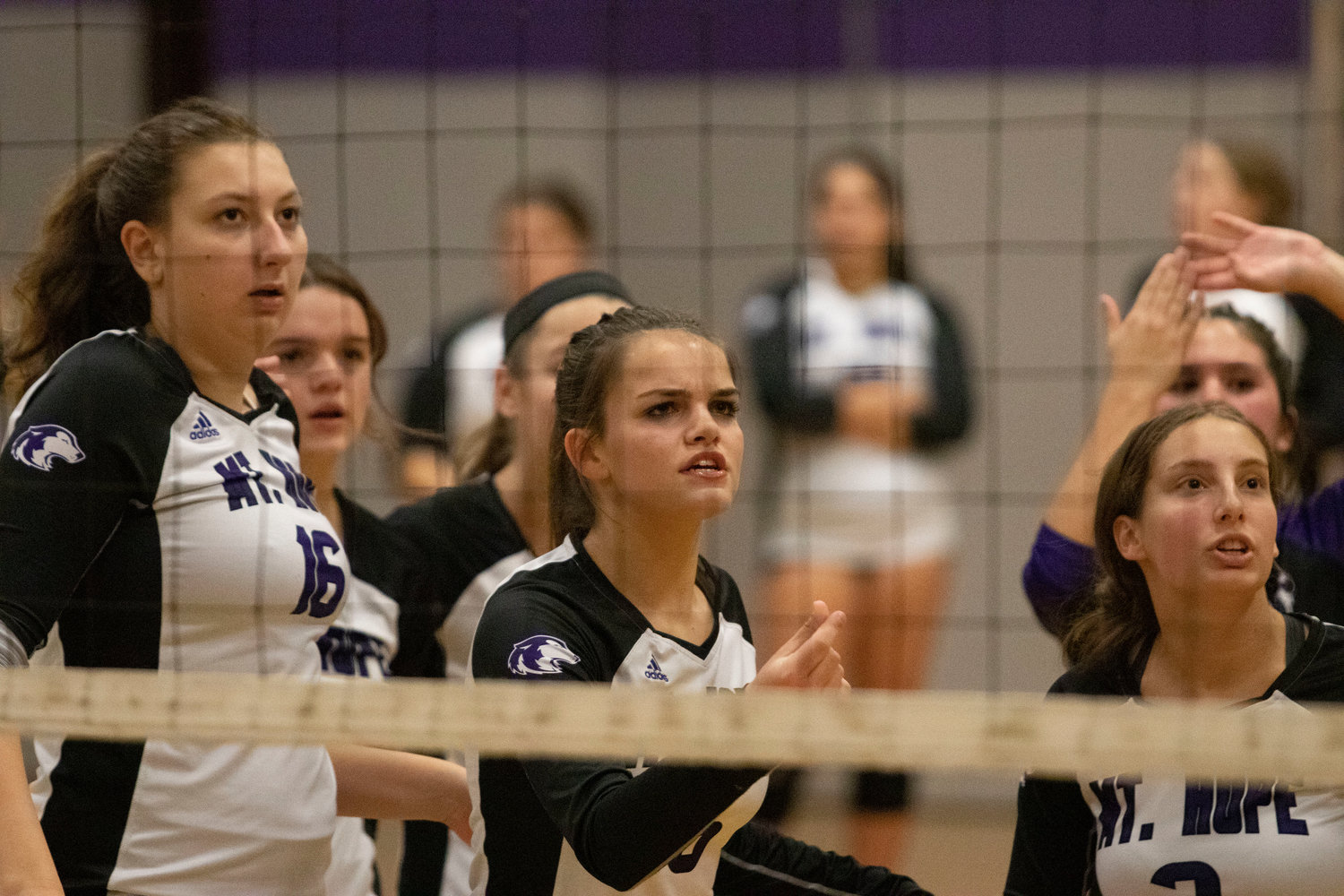 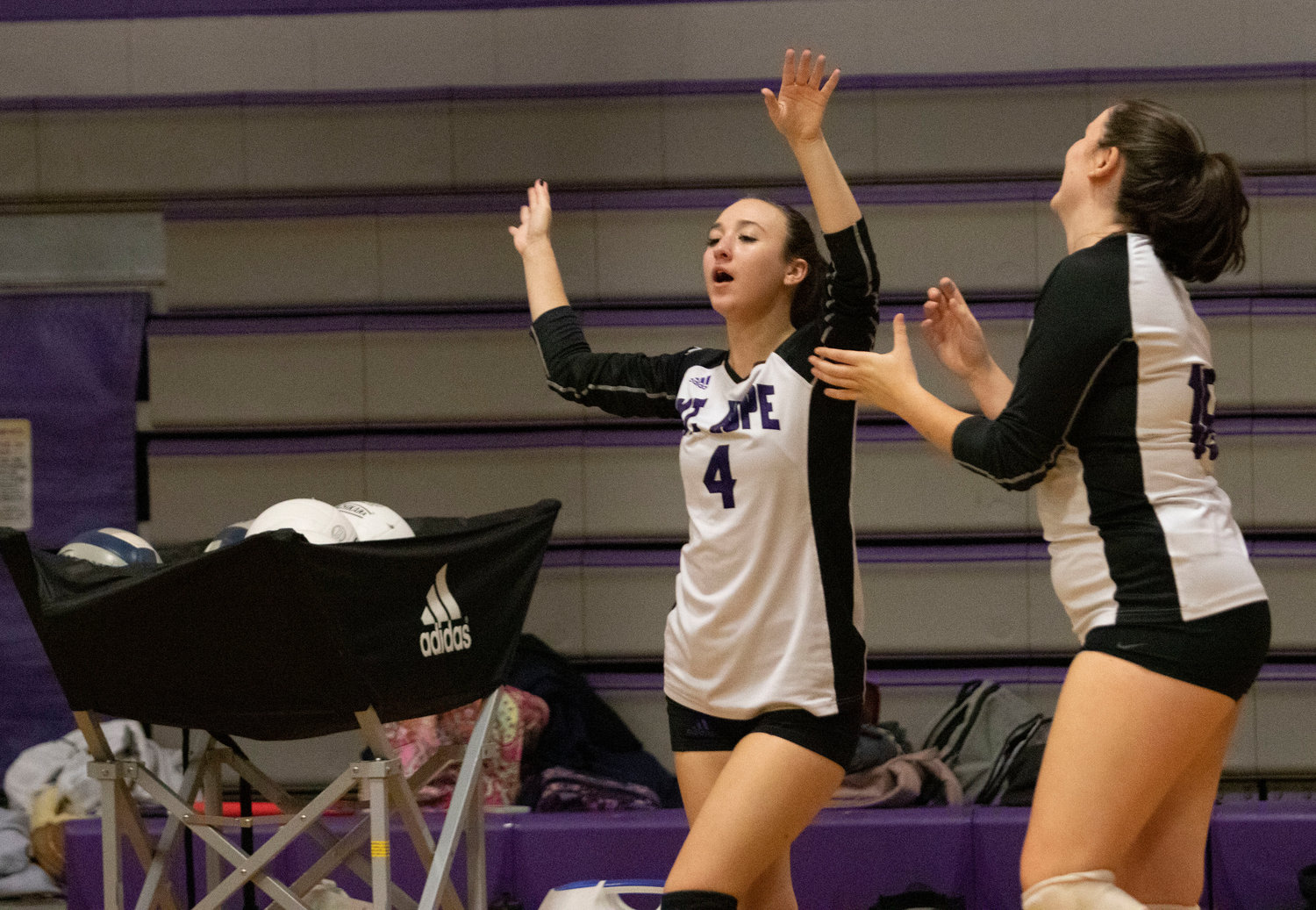 Head Coach Lisa Lunney speaks to the team between games. 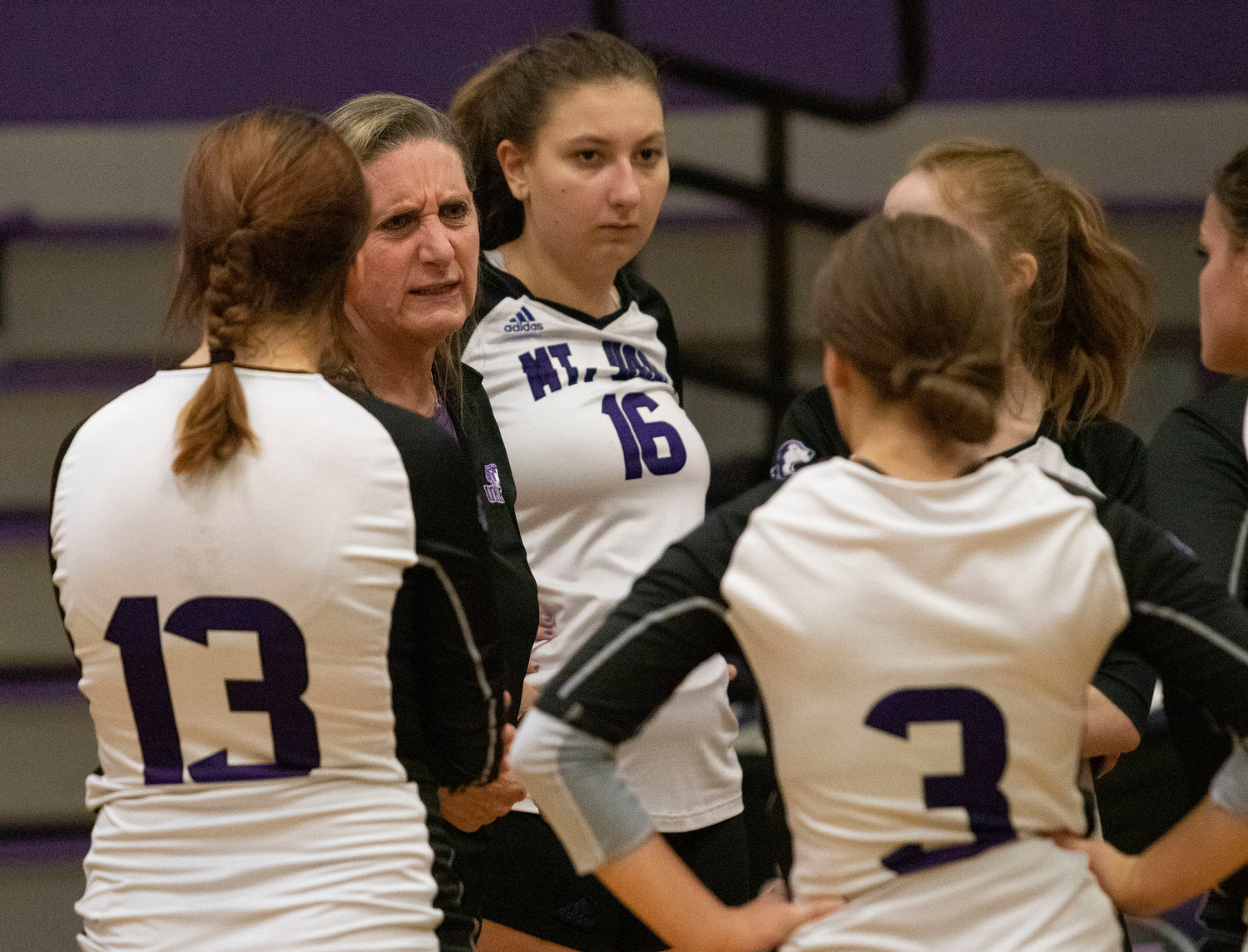 The Huskies perform their ritual cheer between games. 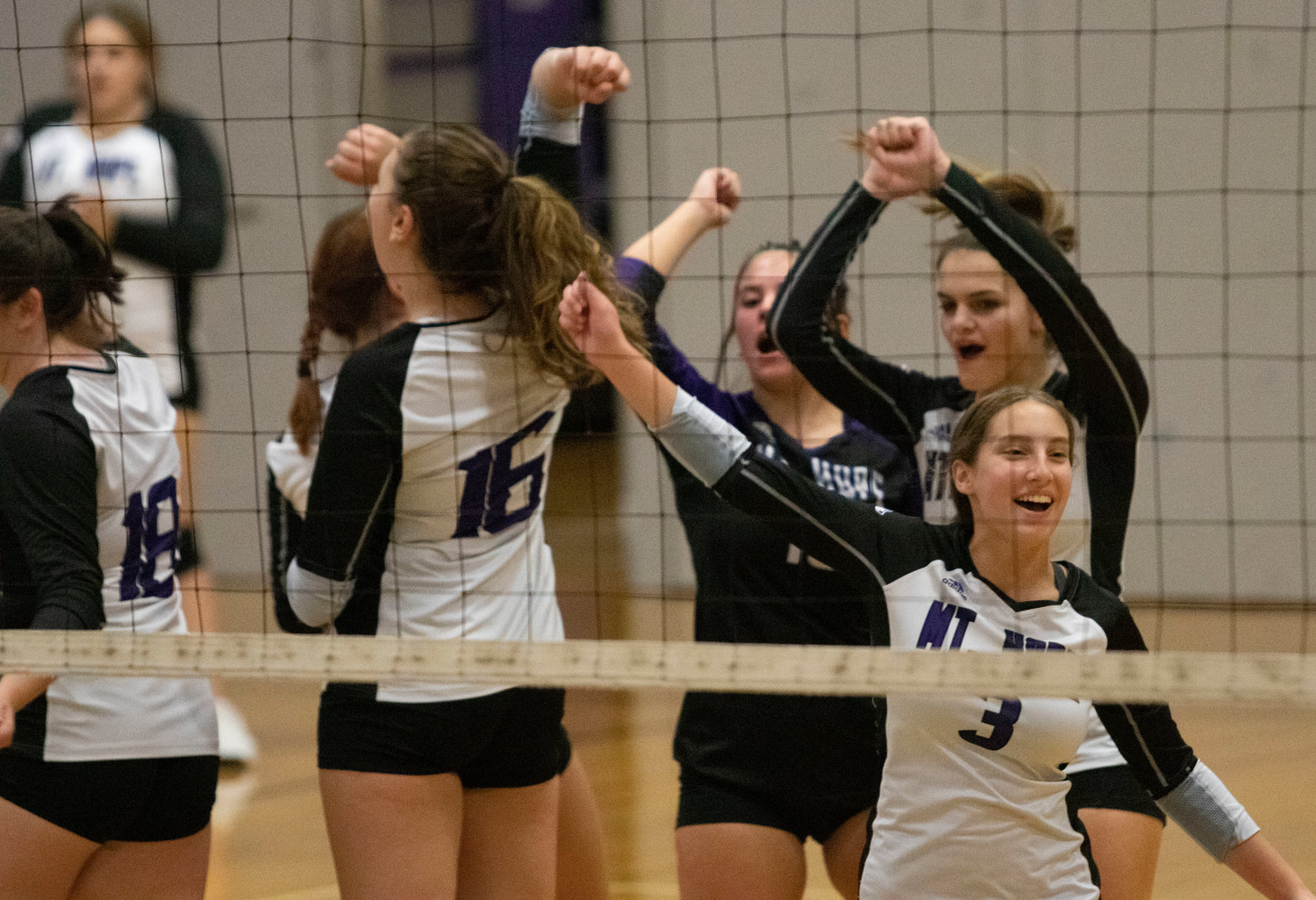 Emma Torres (right) and the team celebrate a Huskies point. 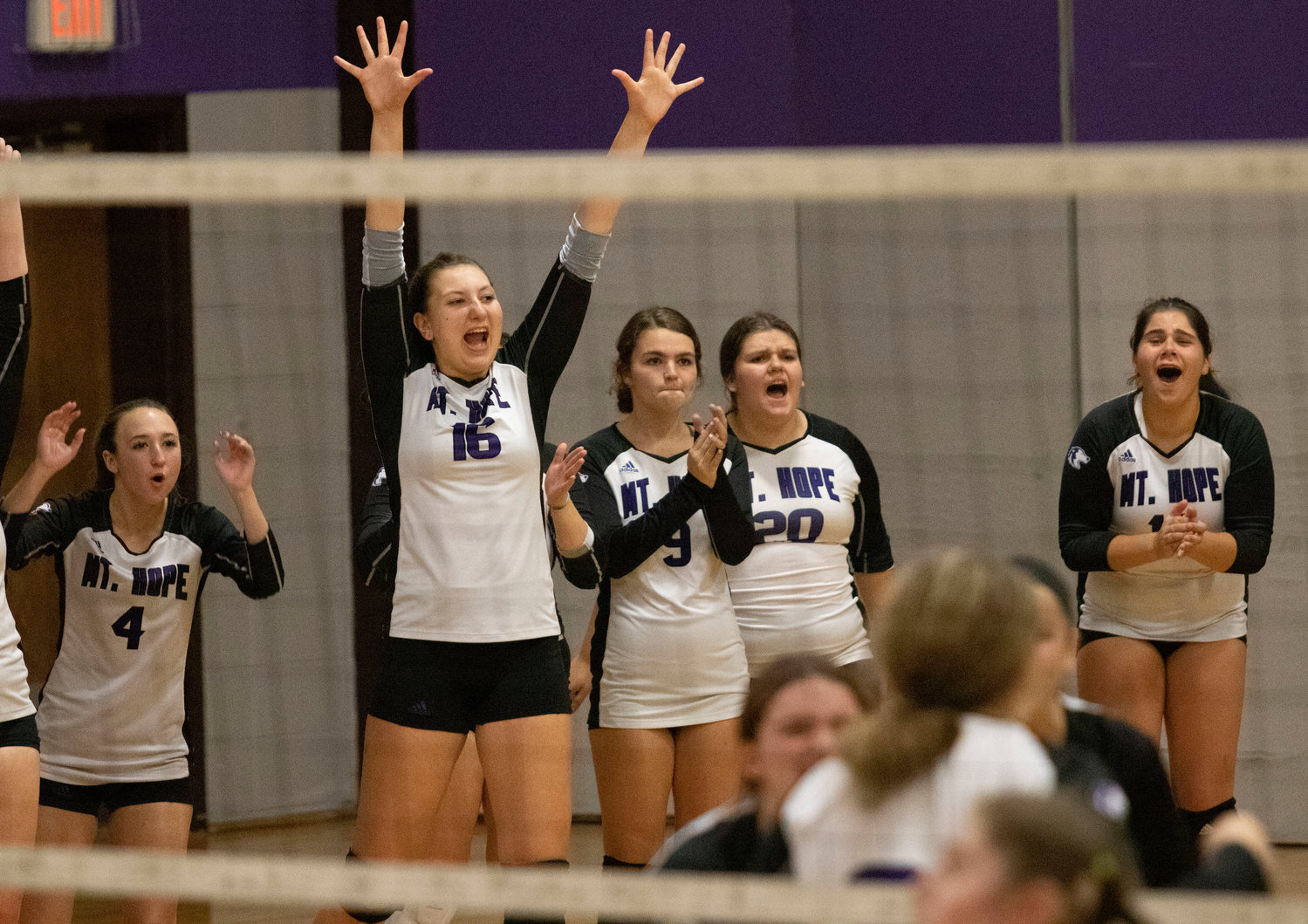 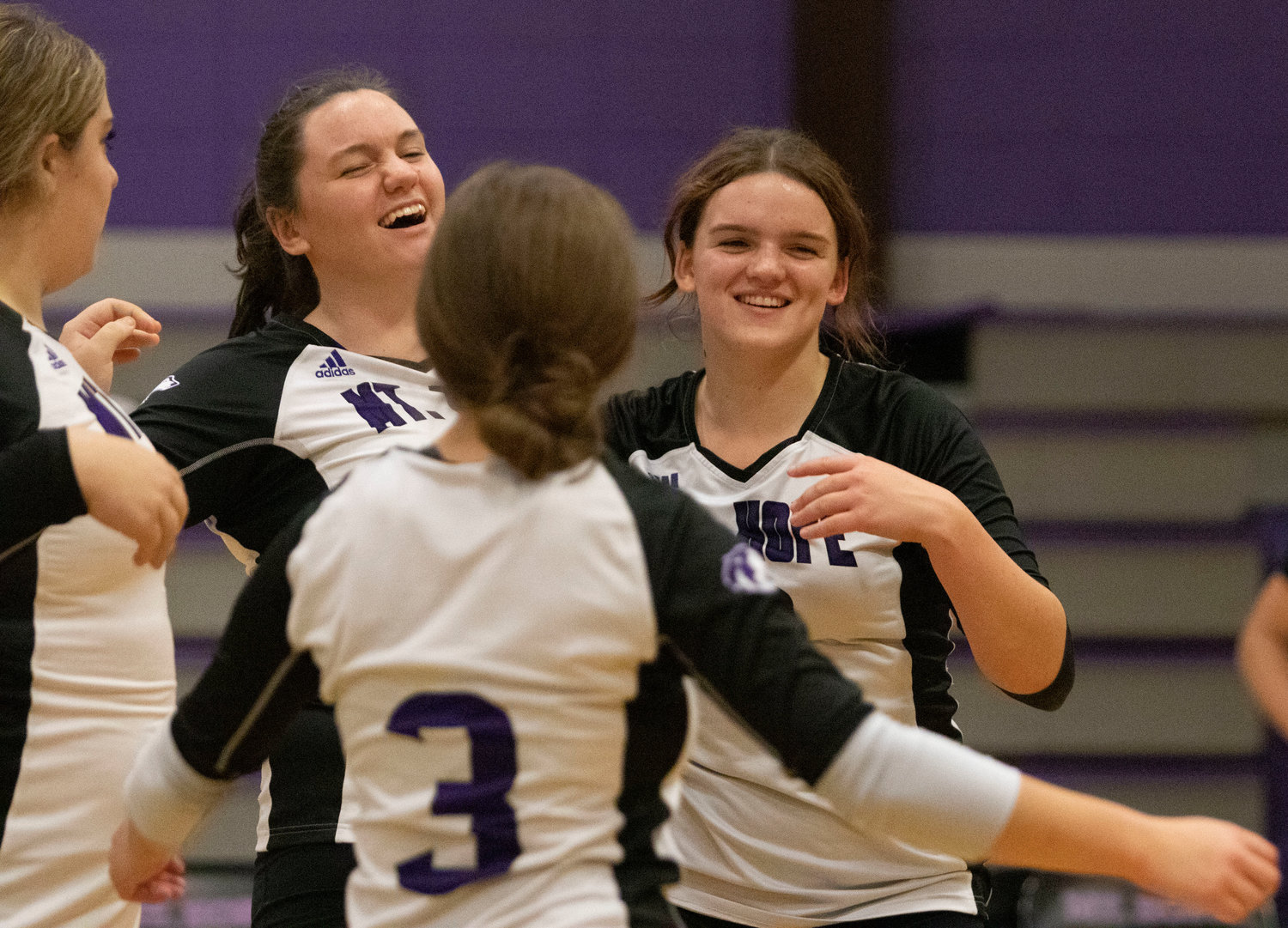 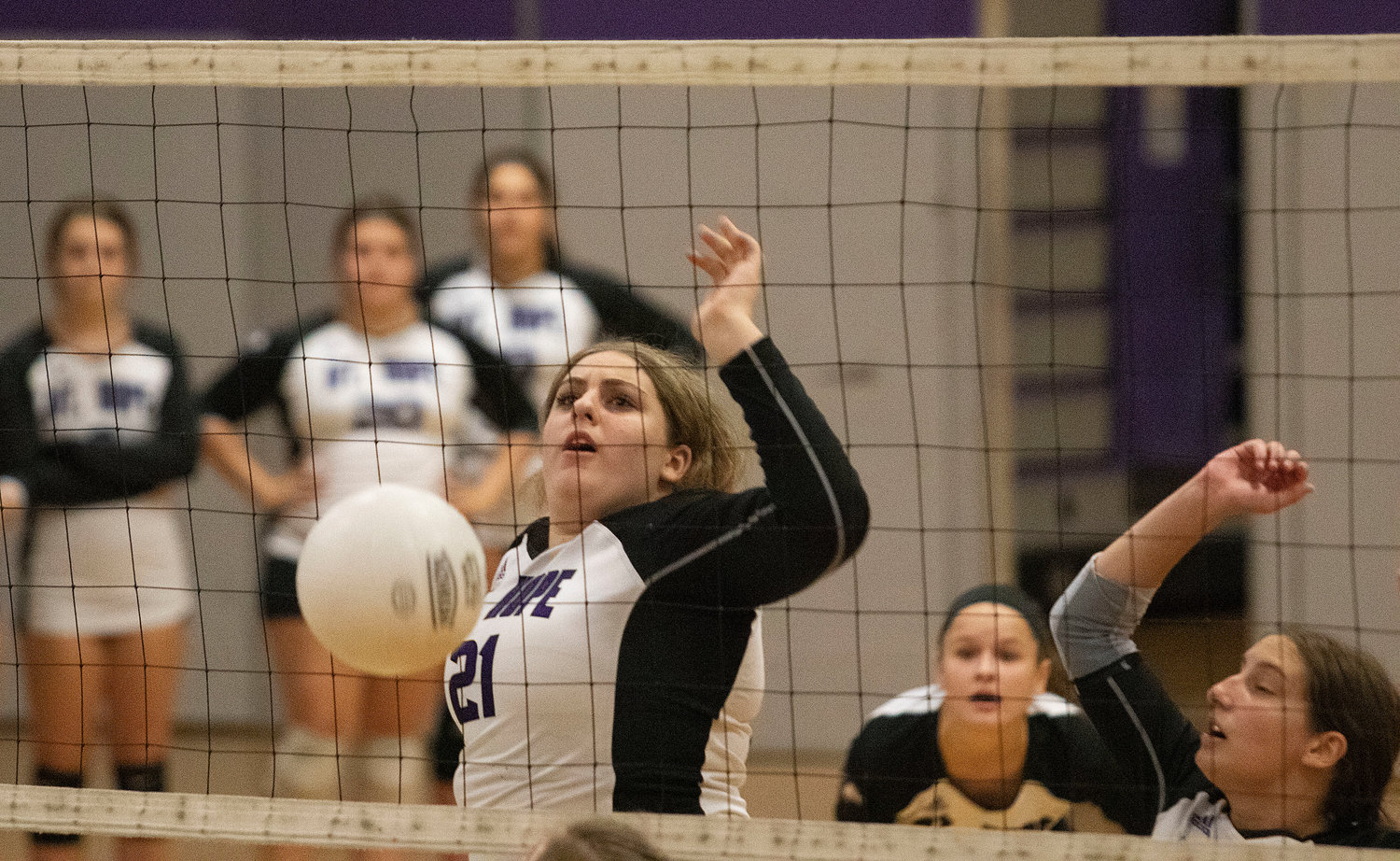 Junior co-captain Mia Shaw volleys the ball over the net during the Huskies home win over North Smithfield on Friday night. 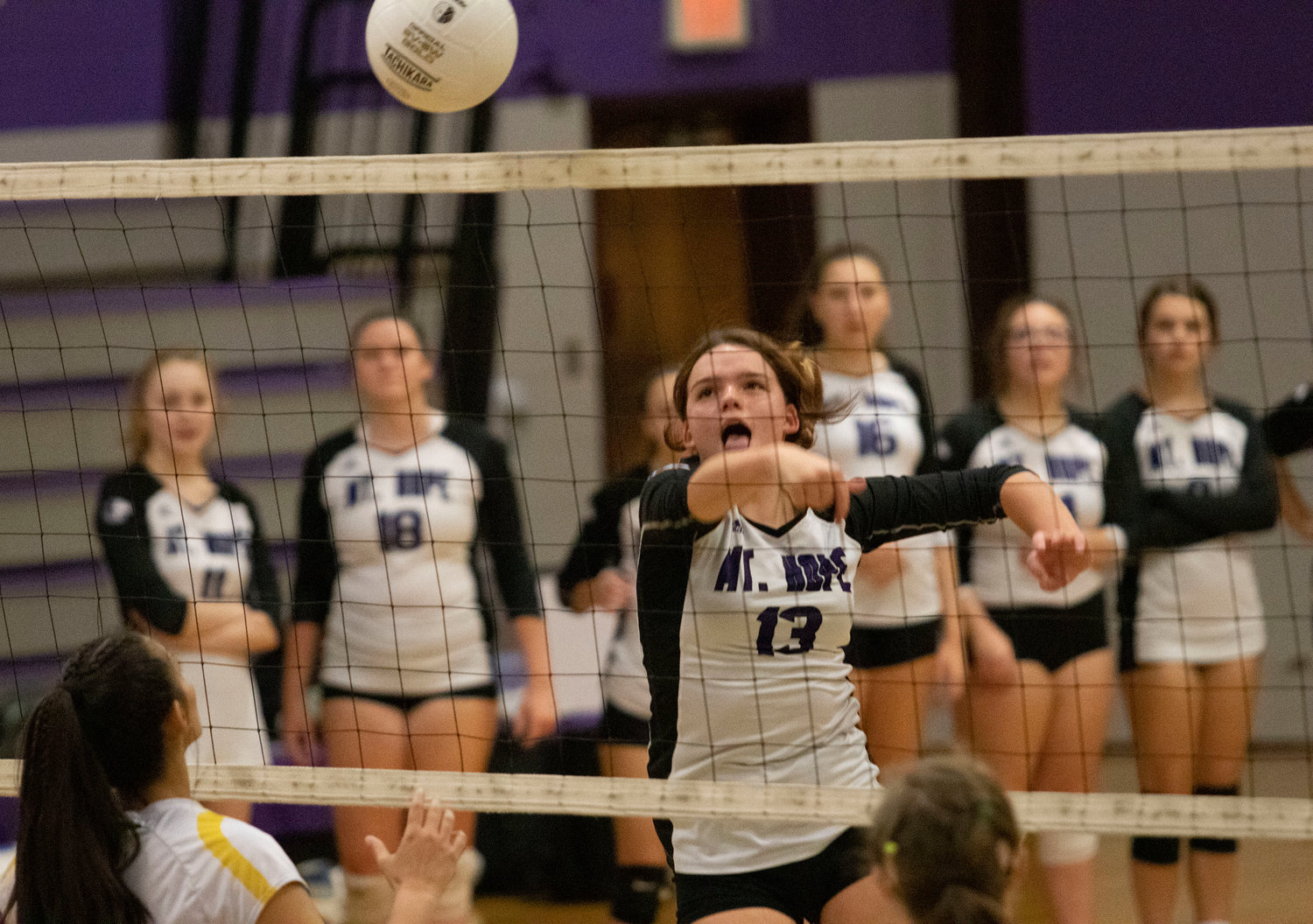 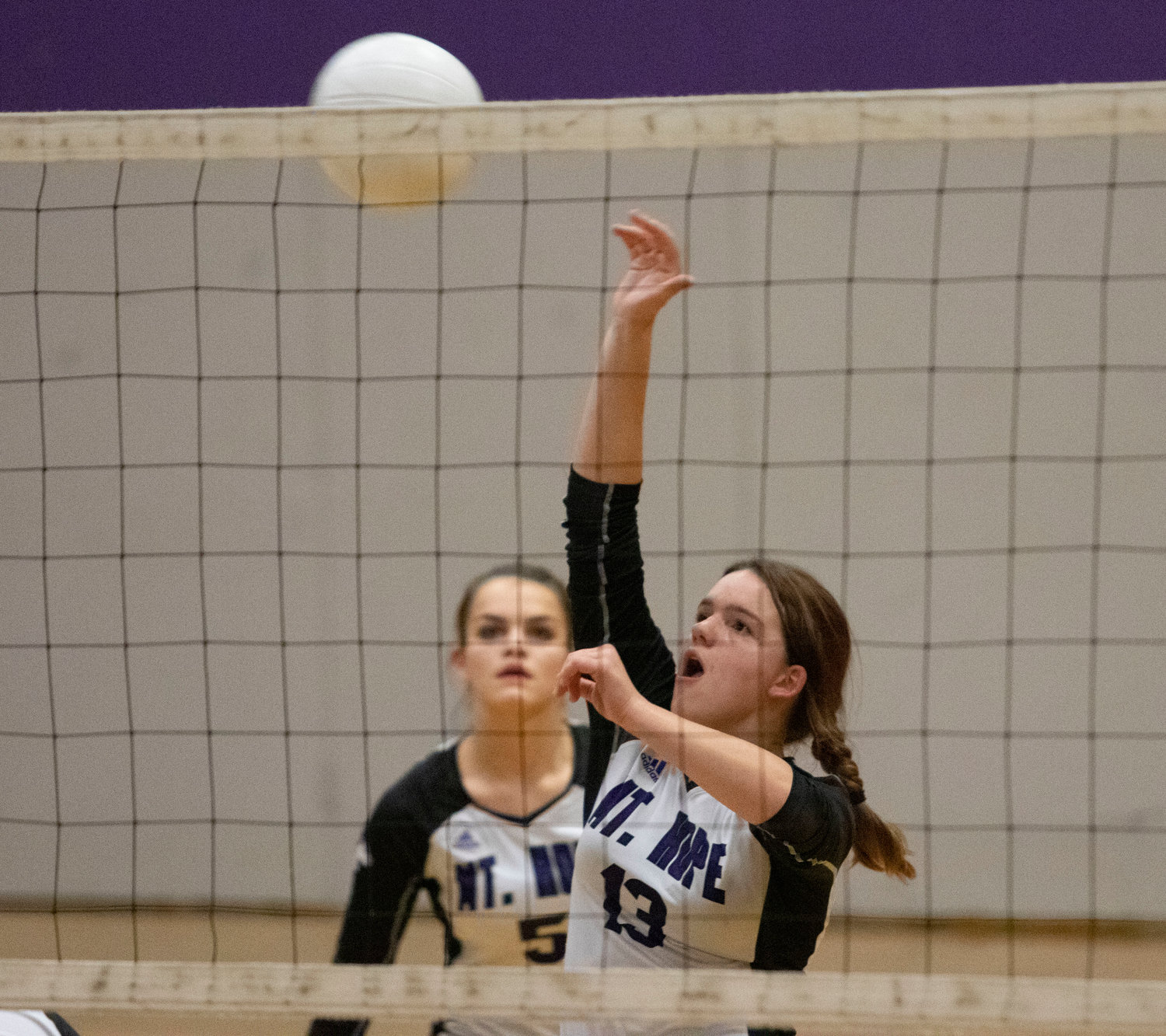 Mia Shaw posted ten kills and 16 assists as Mt. Hope came from behind to beat North Smithfield 3-1 (23-25, 25-15, 25-21, 25-21) at home on Friday night. The Huskies volleyball team is currently 3-2 in Division II and 5-2 overall. Shaw, a junior co-captain who switched from outside hitter to setter this season has been a big reason why the Huskies have a chance to make the playoffs. “Mia is an outstanding defensive player,” said head coach Lisa Lunney. “She gets to everything. She keeps the ball alive and is an imperative piece to keeping us in the games to give us the opportunity to win.”

“Mia is our leader on the court,” said senior co-captain Sammy Malafronte. “She runs a strong offense and always gives one hundred percent.”

The tall athletic Shaw is second on the team in kills and digs. She controls the middle of the court and sets up outside hitter Emily Torres, a senior who had 7 kills against North Smithfield and middle hitters Jillian Brown (5 kills), Abby Allen (9 kills vs Westerly) and Gianna Lunney (10 kills vs Westerly). Both Brown, a senior, and Lunney a freshman, are tall and defend the net well.

Jillian has been a spark on offense,” said Coach Lunney adding, “But Allen is currently our kill leader.” Allen is growing with the position and learning to find holes, said Coach Lunney. “She is a game changer when she is timing her blocking, making opposing teams change what they do,” she said.

Freshmen Sarah Wilcox and Leah Marshall also get into the rotation as outside hitters.

Malafronte leading the team is digs, service consistency and aces

Malafronte the team’s libero, is consistently leading the team in digs, service consistency and aces. She tallied 17 digs against Westerly with 27 serves and 5 aces. The team’s co-captain leads the team with 141 serves made and 33 aces. Malafronte switched from setter to libero this season.

“This was a new thing for her to play libero, Shaw said. “But she’s done a really good job with it so far. Defensively it has given her an opportunity to lead the court. I feel that the two of us are a good force leading the defense and offense.”

Shaw feels the team is growing and bonding well.

“We have a really well-rounded team. I think we could do a lot of damage this season,” she said.

Shaw agreed. “We’re a versatile team, even though we have a lot of younger players, it’s a real good year for us to just play hard.”

Meanwhile Coach Lunney is having a blast coaching this group.

“They are doing phenomenal. This is as much fun as I’ve had coaching in a while. They are a real high energy group. Super energetic and positive,” she said. “They are a cohesive team. They are super connected and it’s carrying them.”

“We had trouble finishing,” said Coach Lunney. “Chariho was a very consistent and scrappy team.”