The Pearson family are used to tinkering in factories, inventing new things and then plunking them in the water. It’s kind of their thing. 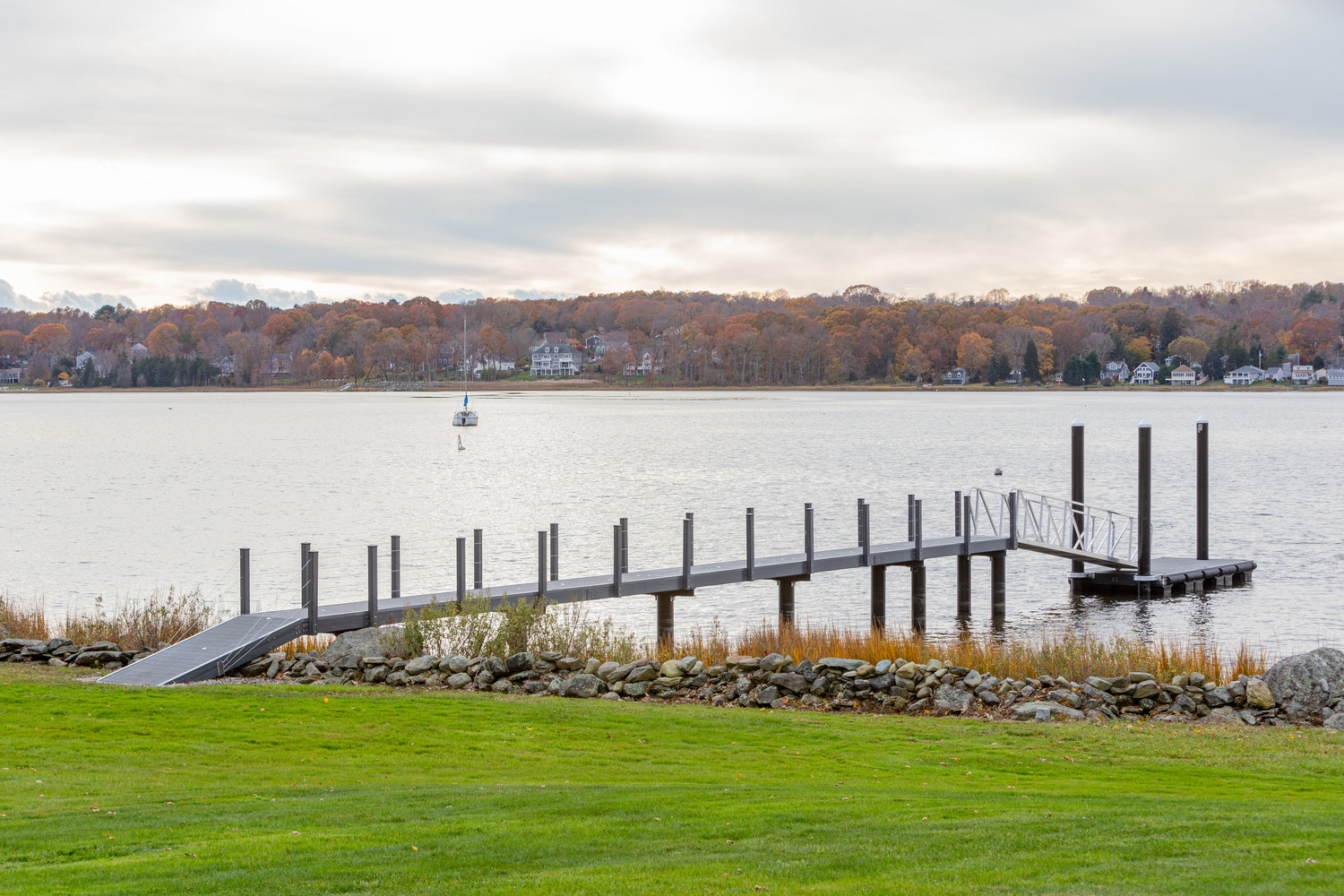 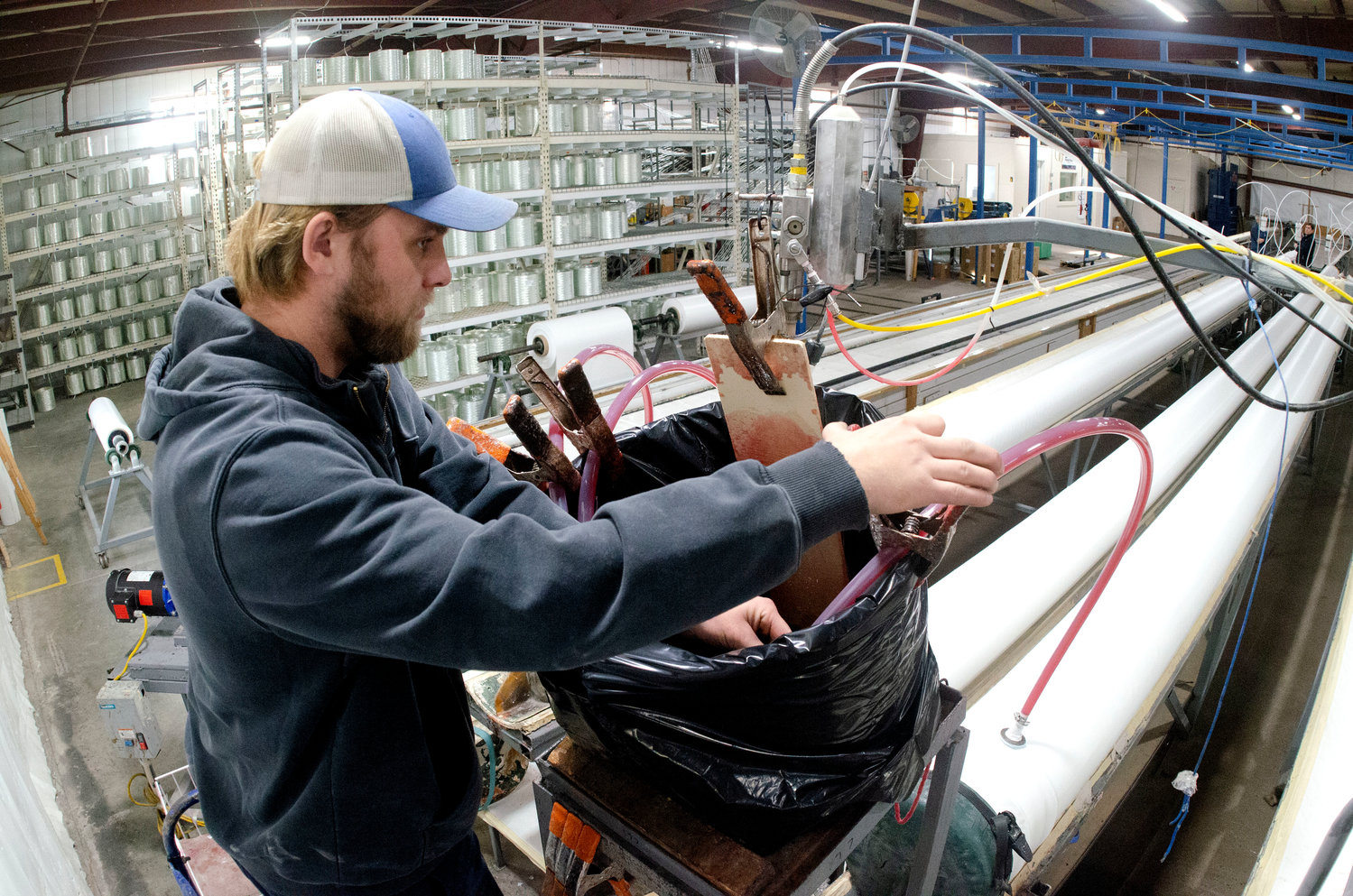 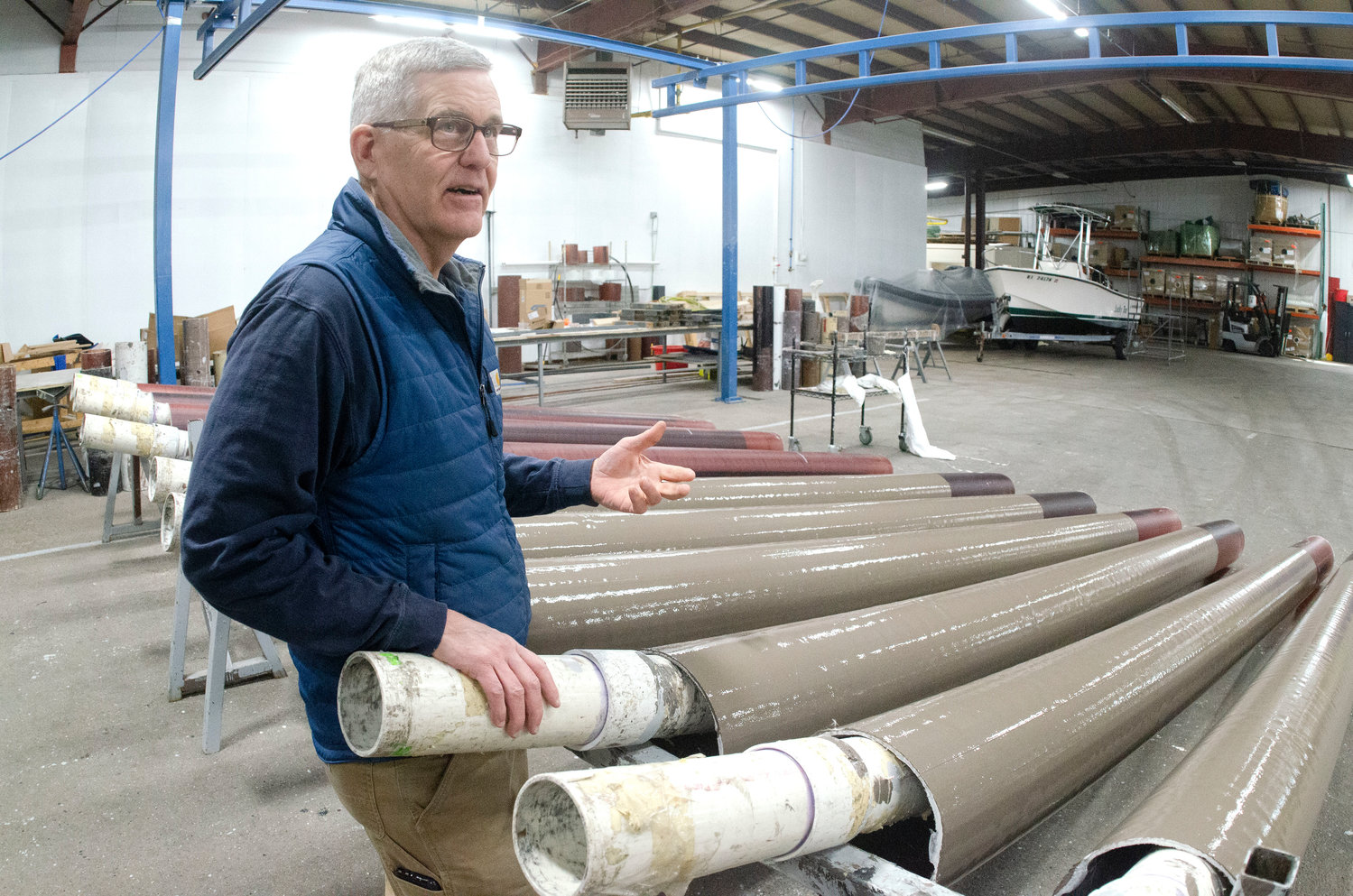 Company president Mark Pearson talks about how they manufacture and paint this series of pilings inside their Somerset facility.
Richard W. Dionne Jr. 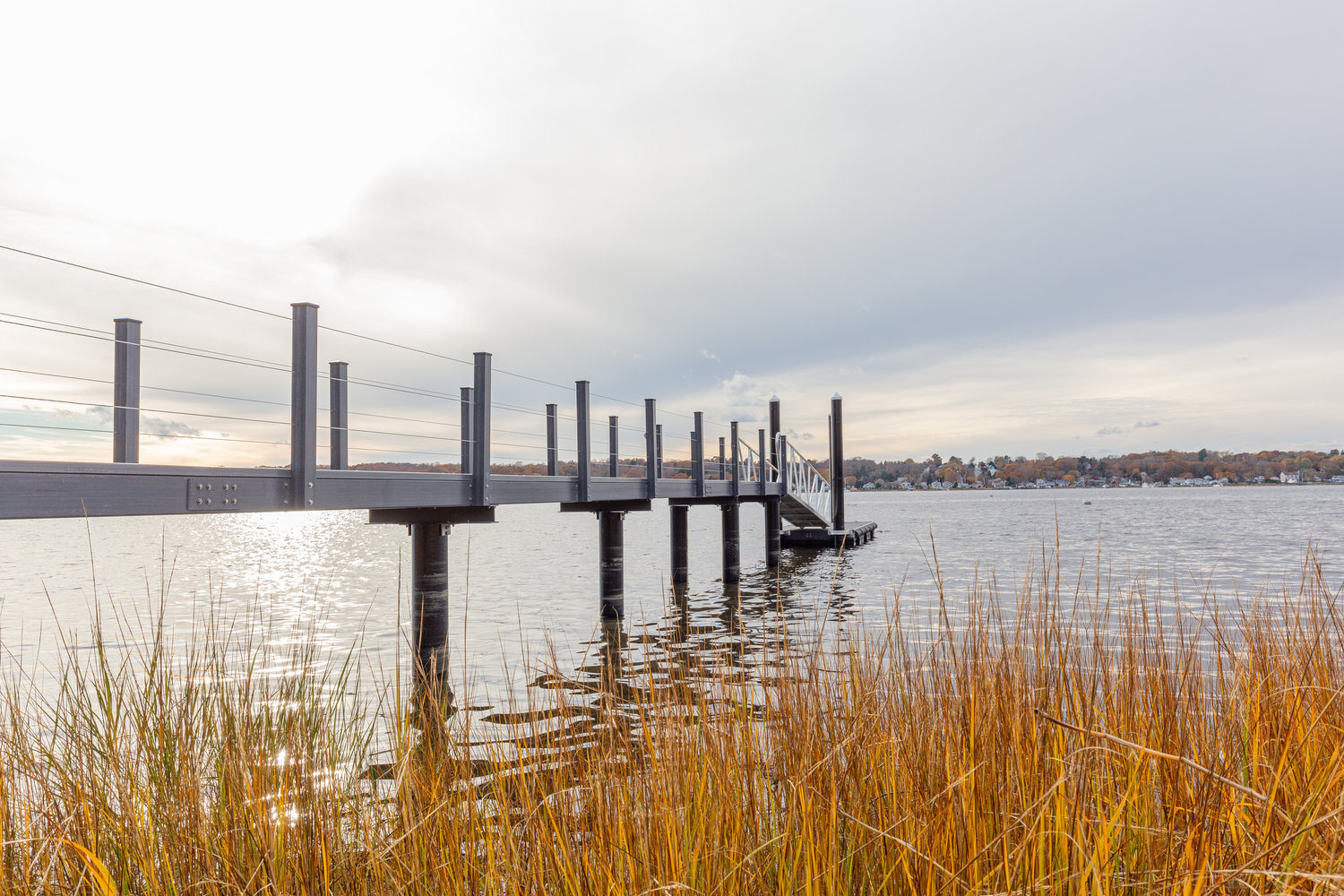 This angle shows the single line of pilings that support the Touisset dock. A series of four single pilings extends from shore into the water, before they fan out to double pilings at the end of the dock. 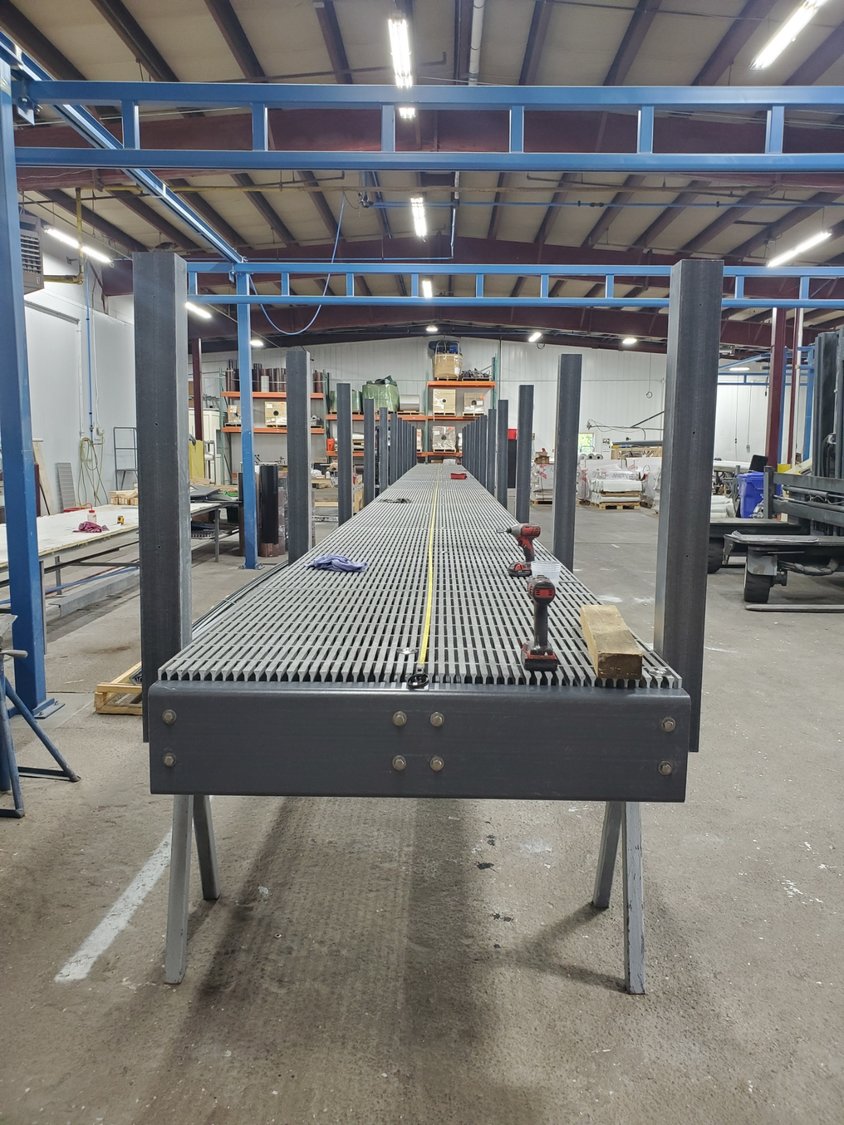 The all-composite dock was built into the manufacturing plant, like a big Erector set of composite pieces. It was then taken apart into three large sections to be floated by barge to the site. 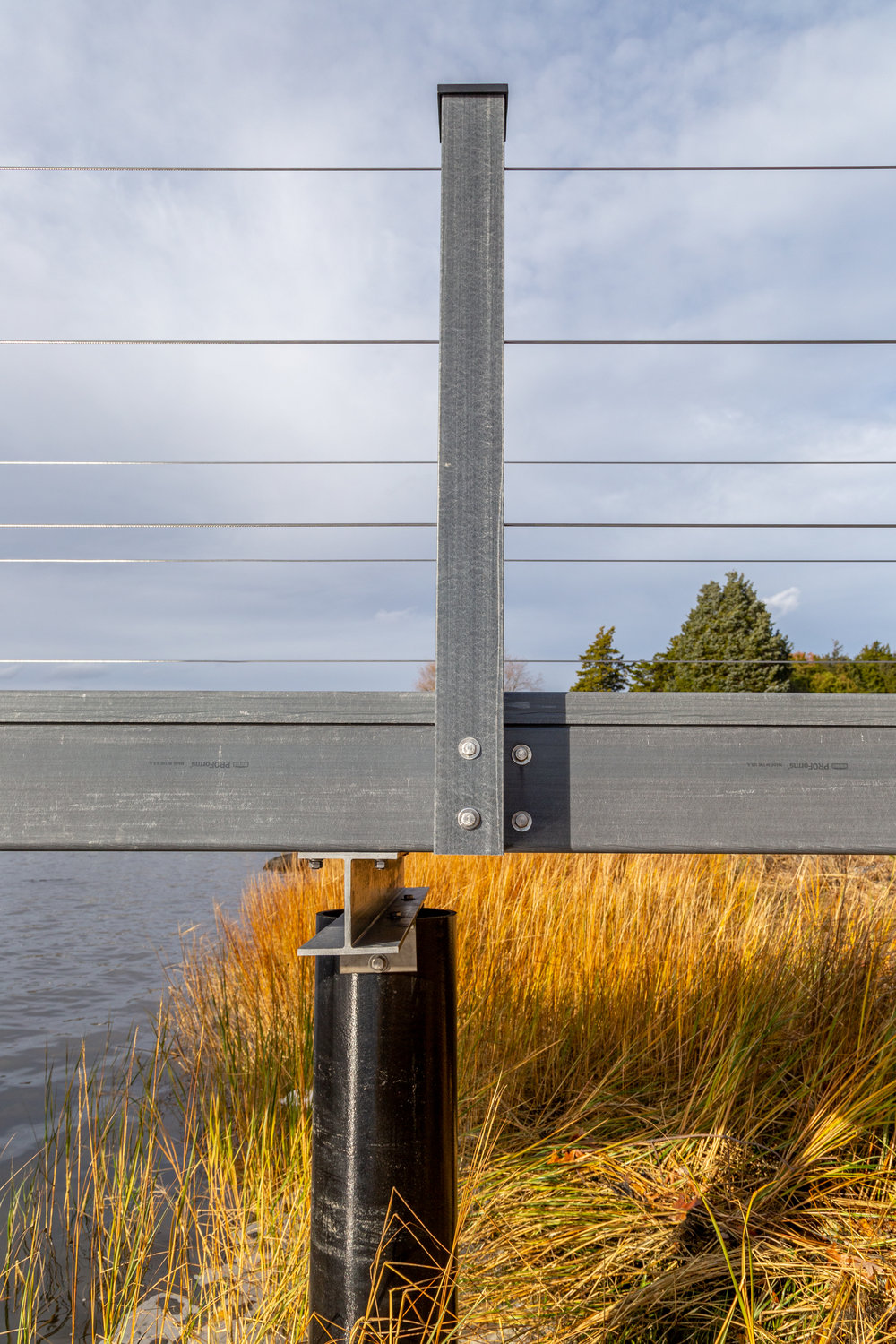 At the site, the structure of piling, beams, deck and rails was put together with stainless steel hardware (the only non-composite material used). 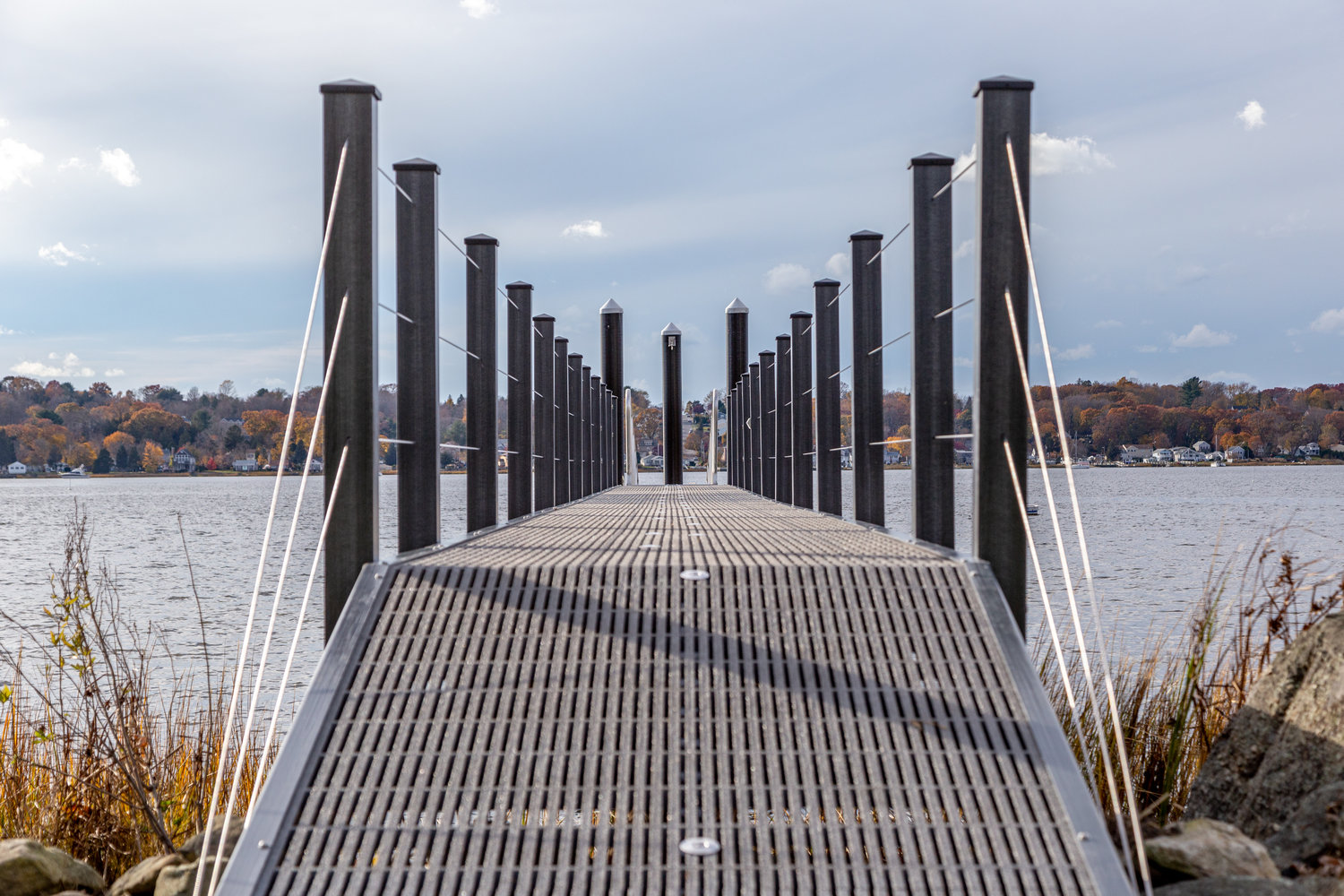 A view of the finished dock, looking out to the Kickemuit River. 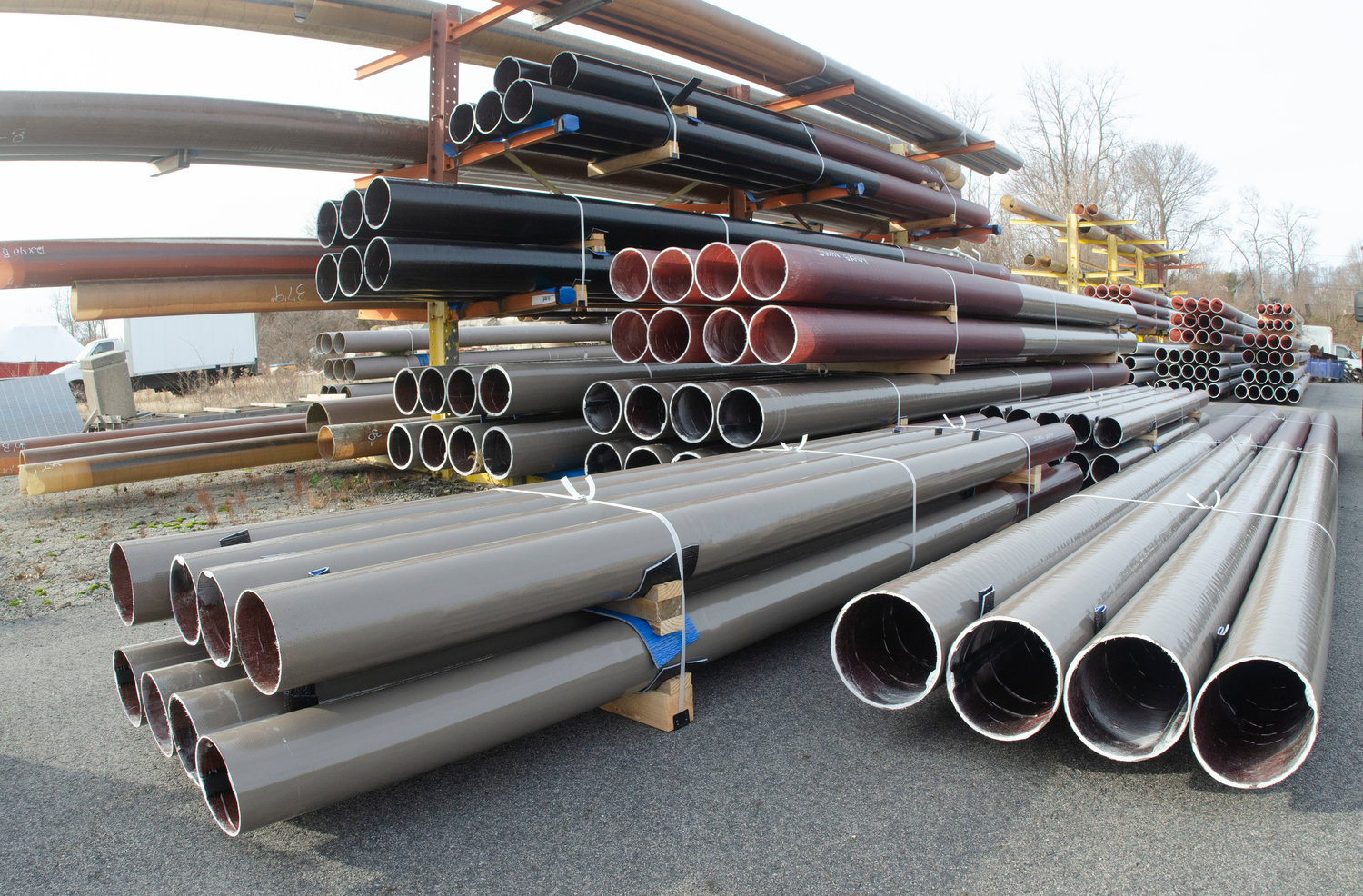 The Pearson Pilings yard, with composite pilings of different widths and lengths waiting to be shipped around the country.
Previous Next
Posted Wednesday, January 12, 2022 7:00 am

Once we installed our dock, people passing by on their boats would yell and say they love the way it looks. It’s taking something that has a traditional look and giving it a modern flair.”
Mark Pearson
By Scott Pickering

The Pearson family are used to tinkering in factories, inventing new things and then plunking them in the water. It’s kind of their thing.

Nearly 70 years ago, cousins Clinton and Everett Pearson started making dinghies out of fiberglass and resin, first in a garage and then in small factory spaces in Bristol. The dinghies of course grew to become world-class yachts, and the cousins and their partners launched thousands of boats under the flags of several different companies — Pearson Yachts, Bristol Yachts and Tillotson-Pearson Inc., widely known as TPI.

All worked with fiberglass and resin, which came to be known as “composites,” and all launched innovative designs from locations in the East Bay, with big plants in Portsmouth, Bristol and Warren.

Today an offshoot of the Pearson legacy is Pearson Pilings, which operates out of a modest building in Somerset, overlooking Mt. Hope Bay and the Fall River shoreline.

Mark Pearson grew up in the composites industry, working in leadership positions with TPI and Pearson Composites. He is now president of Pearson Pilings, which uses the inherited expertise in composites to build some of the world’s longest-lasting supports for docks, houses, bridges and more.

Pearson pilings are holding up houses in Louisiana, Texas, Mississippi, Alabama, Mexico, the Cape and Hog Island. They support a fishing pier in South America. They anchor docks throughout the Cape, marinas in Florida and foot bridges that cross sensitive coastal dunes. They are holding up osprey nests in Massachusetts. They encircle the elephant area at Roger Williams Zoo in Providence. They form underwater reefs off the coast of Alabama. They provide wave protection for a bridge in Houston, Texas.

They also hold up the first all-composite dock ever constructed in Rhode Island — at Mark Pearson’s home along the Touisset shoreline in Warren.

Pearson’s new Touisset dock is not the first in existence. Pearson Pilings has collaborated with buyers in Massachusetts and North Carolina to install all-composite docks at their coastal homes. The first North Carolina installation is 325 feet long and has survived two hurricanes. It has also spawned several orders from neighbors, after boaters saw the new dock and wanted one of their own.

Mark Pearson said he’s getting the same reaction out on the Kickemuit River. “Once we installed our dock, people passing by on their boats would yell and say they love the way it looks,” he said. “It’s taking something that has a traditional look and giving it a modern flair.”

A comparison might be stainless steel refrigerators. For generations, they were utilitarian and bland, designed for purpose, not appeal. Then stainless steel made the old kitchen standby sleek, elegant and modern.

Pearson is hoping buyers find a similar appeal in docks. The all-composite dock is not specifically designed to be sleek — it just is. That’s the reality of composites, where the materials are likely to look the same decades from now. The dock Mark and his wife Tracy installed is gray and black, smooth and elegant in design and feel.

Pearson Pilings does not manufacture all the materials of the composite docks. They make the pilings of course. The rest of the materials (decking, supports, rails) are often made by Bedford Reinforced Plastics in Bedford, Pa.

The Warren dock was designed on computer, manufactured in pieces in Bedford’s plant, and shipped to Somerset like an enormous Erector set. Nick Pearson, Mark and Tracy’s son, assembled the entire 76-foot dock inside the warehouse, fastening the composite pieces together with stainless steel hardware. It took him just three days.

They then split the dock into three large sections that were loaded onto a flatbed trailer and driven to the installer’s barge. The sections were then floated out to the Touisset shoreline and reconnected over the water, atop a line of Pearson pilings. Brendan Lund of Borden Light Marine Contracting managed the install.

“Brendan has probably installed more fiberglass pilings than anyone in the country,” Mark Pearson said. “He did everything — drove the pilings, did the final installation and left — in two days.” A typical dock installation lasts one to two weeks.

In its core market, Pearson Pilings competes against companies using very traditional materials. Its fiberglass pilings are much more expensive than typical wood pilings used in residential and commercial docks around the world. However, Pearson makes up the difference when it comes to design and installation.

“We typically can use a single-piling design,” Mark said. Because the Pearson pilings are stronger and more durable against nature’s brute force — they can bend and be more pliable against wind and wave — installers can use fewer pilings when using composites. Traditional docks use a double row of pilings, plus an extensive system of cross braces, to support the structure. Most composite docks use a single row of pilings.

Because the pilings are stronger, the designs also space them further apart. And because there are fewer pilings, installation costs are lower. “If you remove 20 pilings, plus the $500 cost for every piling you have to drive into the ground, it makes a big difference,” Mark said.

He tells customers that in the end, the cost for a dock using composite pilings with traditional decking, and a dock built entirely of traditional materials, is almost the same.

The same is not true of the all-composite dock. The dock installed at the Pearson home is more expensive than a traditional dock. But none of it will ever rot, Pearson says. “We estimate its lifespan as generational,” Mark said. “It costs more, but it’s going to last. You’re not going to have to replace it.”

The Pearsons built a dock at Everett’s home on the Kickemuit River back in 1997. The pilings are in good shape today, but the wood decking is rotted and needs to be replaced.

Pearson’s pilings are manufactured by its small team in Somerset and stacked in the yard, waiting for shipment around the country. The company has worked with wealthy homeowners, city and state governments, nonprofits and environmental groups to install pilings for their vast array of uses.

Because they do not rot or deteriorate, they have virtually no replacement cost. They also do not emit any toxins into the environment. Traditional wood pilings are coated in chemicals to protect against deterioration from sun and water — chemicals which break down over time. The composite pilings are cooked to extreme temperatures and set for life.

“These pilings are inert,” Mark said while standing beside a batch that were recently painted and drying inside the factory. “They’re a thermal set, so the fiberglass hardens and stays in its original form. It’s not like a plastic bag that will degrade and break down. That doesn’t happen with our pilings. So from an environmental standpoint, these pilings are an excellent choice.”

The town of Falmouth, Mass., passed an ordinance prohibiting treated pilings in any new marine projects. Builders can use untreated pilings or they can use composites. “We do a ton of business with contractors working in Falmouth,” Mark said.

Pearson’s pilings are gaining traction in traditional markets. The City of Miami recently took more than 50 as part of a marina replacement project. It expects to order more as it continues repairing its marine infrastructure.

There’s also a strong possibility that Pearson will be supplying materials for a unique bridge project in the East Bay. Warren’s “Broken Bridge” is on the Rhode Island Department of Transportation’s (DOT) immediate to-do list, with construction expected this spring. Once a railroad bridge that spanned the upper reaches of the Kickemuit River, it rotted and went away decades ago.

When rebuilt, it will connect to a bike trail that extends east, past Kickemuit Middle School, and continues into Massachusetts. Pearson consulted with DOT on the design of the bridge, which will be built using composite pilings and beams. Mark Pearson said they have not bid on the project yet, but he plans to when the time comes. Cardi Construction has been awarded the overall construction bid.

If it comes to pass, it would be a signature moment for Mark Pearson and his company — a bridge built near his home, using his pilings, that opens recreation to thousands of his friends and neighbors. It would also signify acceptance from large government, something Pearson has been working toward for decades.

Perhaps success with the “Broken Bridge” would open possibilities for future bridge projects with DOT. Cyclists might wonder if composites could help rebuild the defunct East Bay Bike Path bridges, old wooden spans resting atop rotted wood pilings. Those bridges have been locked and closed for the past two and a half years. Though reluctant to say too much about the bridges, Mark acknowledged that he’s studied the bridges, drawn up plans and would gladly assist if called upon.