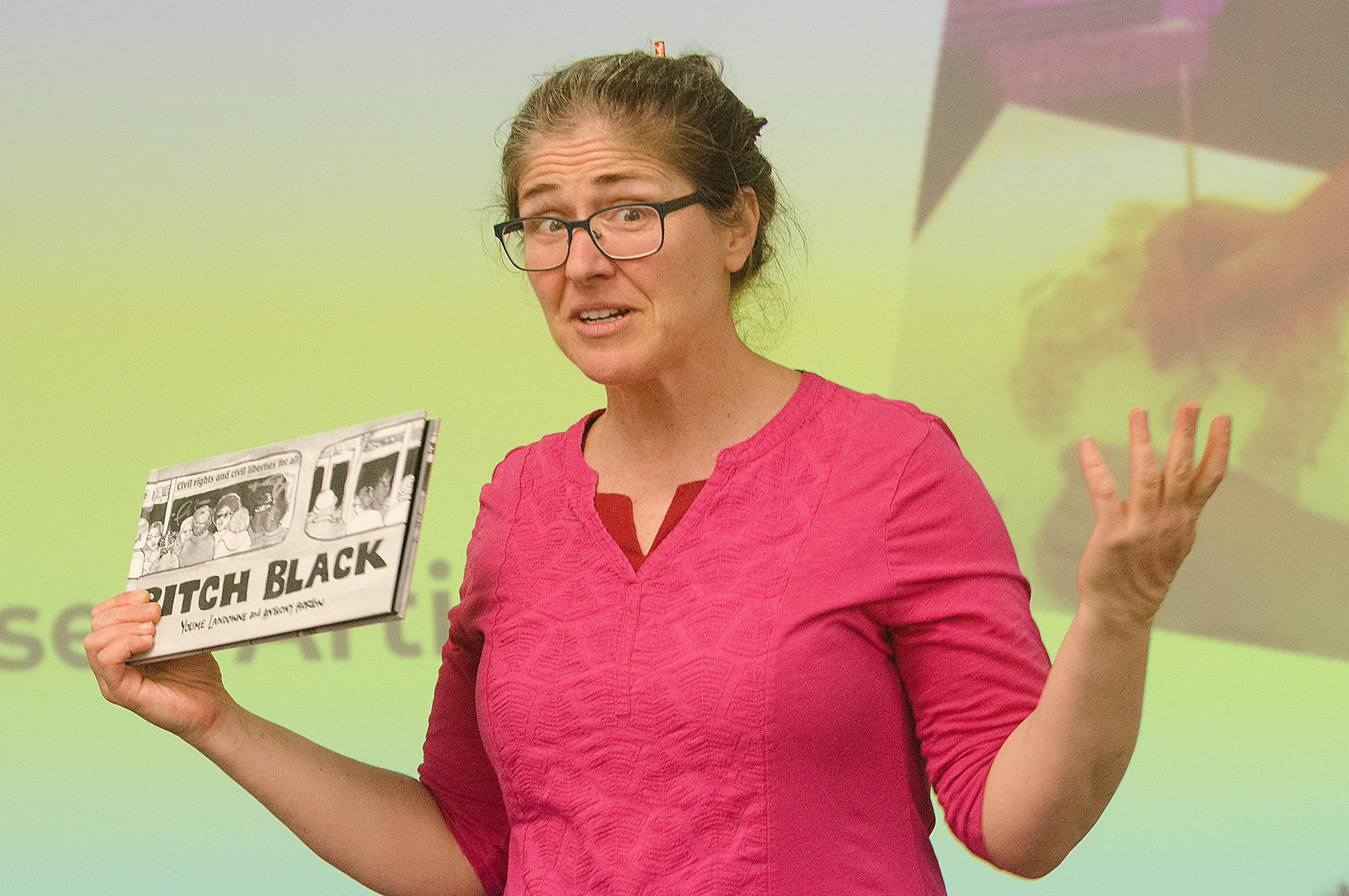 Author Youme Landowne holds a copy of her graphic novel, “Pitch Black: Don't Be Skerd,” which she co-wrote with Anthony Horton, a homeless artist who lived in the New York City subway system. She was speaking to Portsmouth Middle School students as part of the All Day Audible With Authors Event on Friday.
Richard W. Dionne Jr. 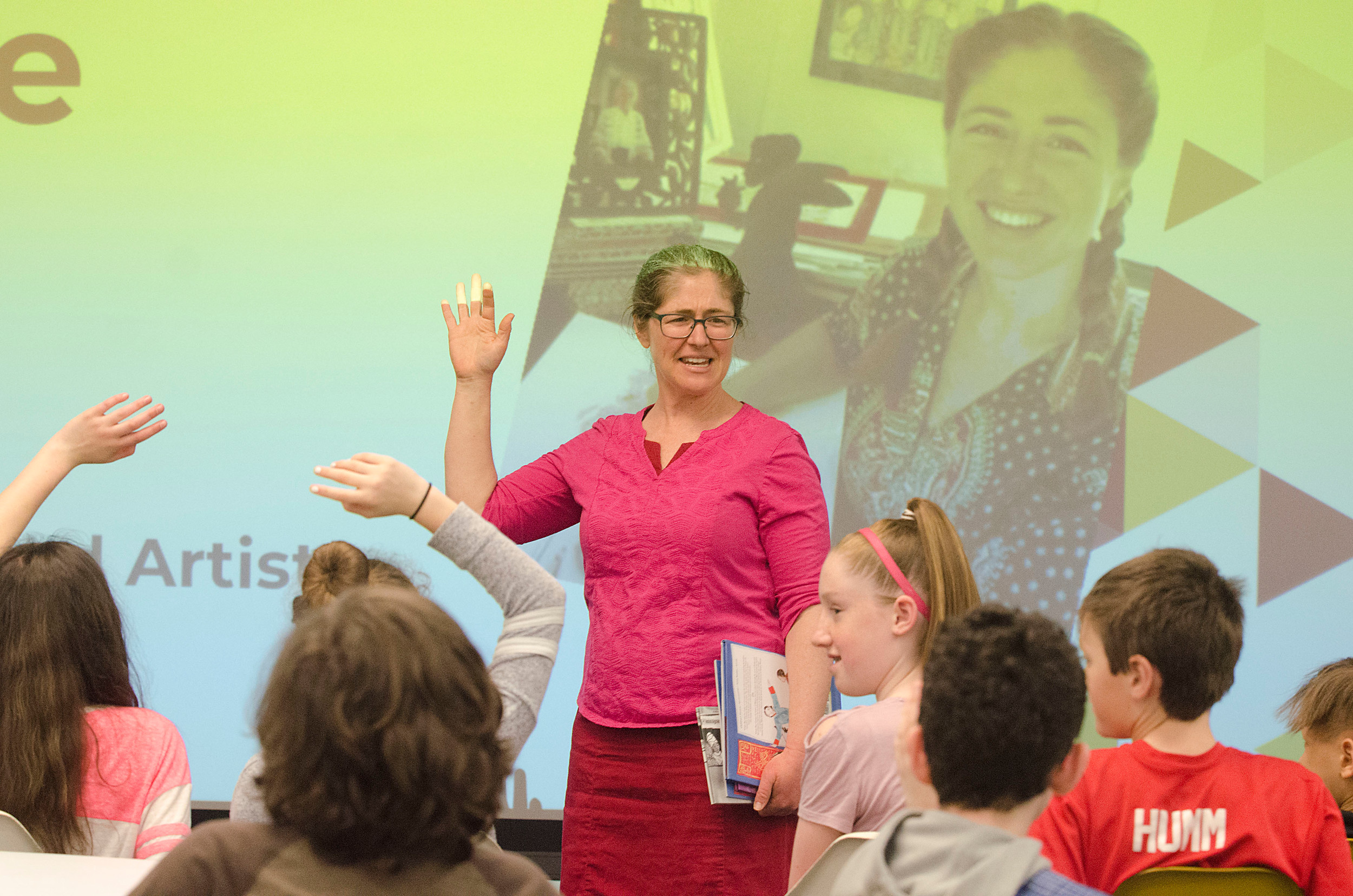 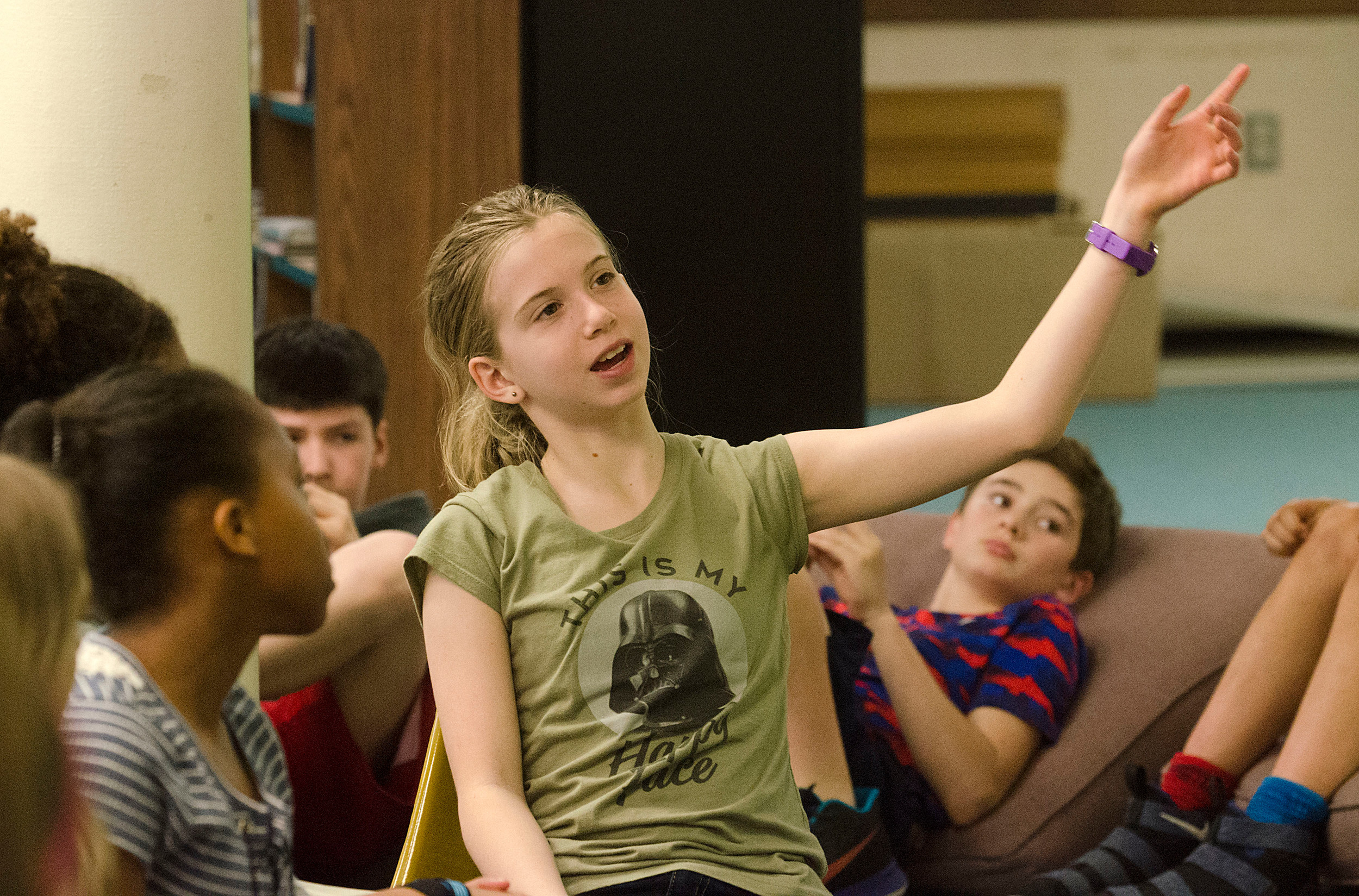 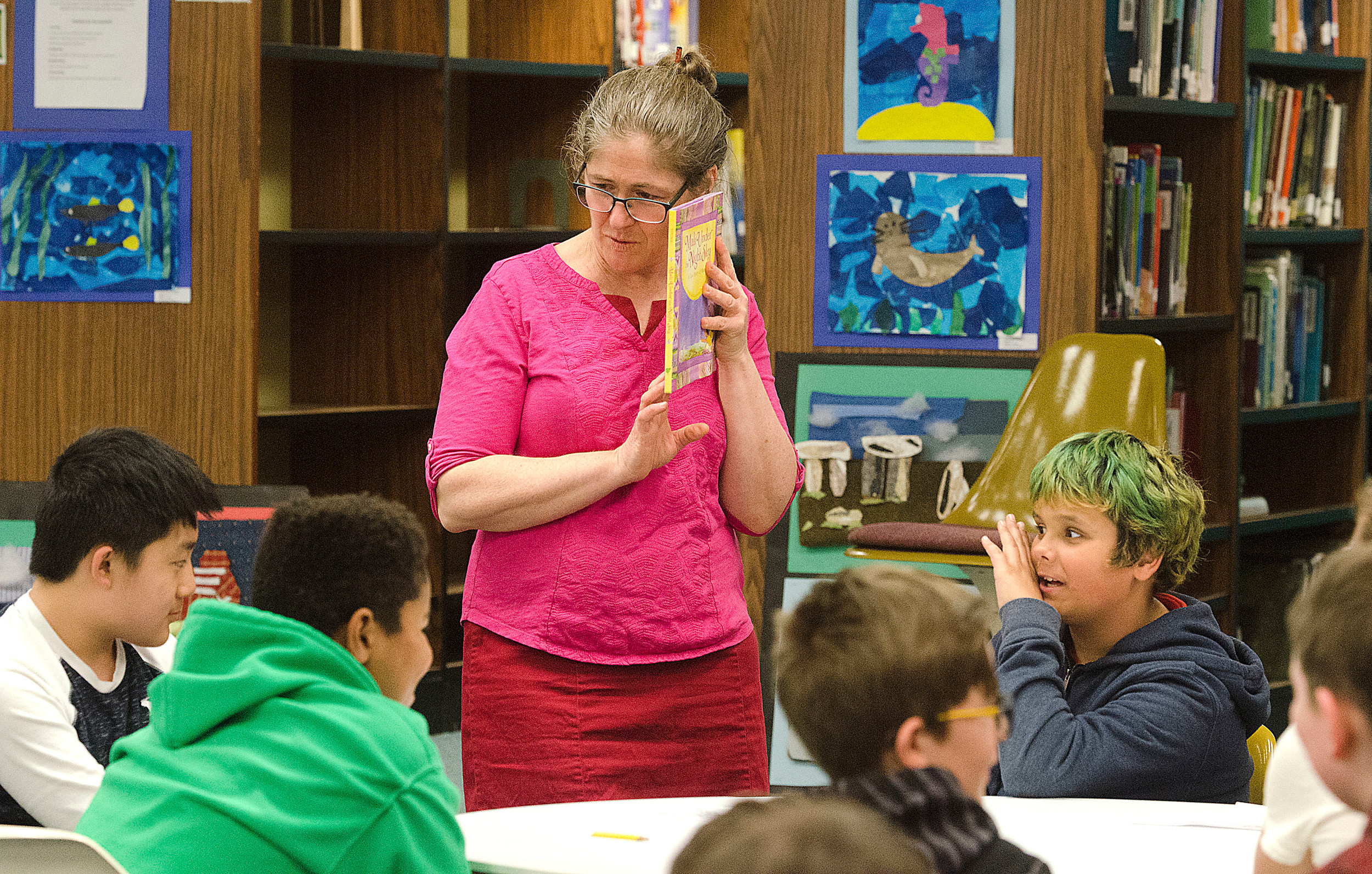 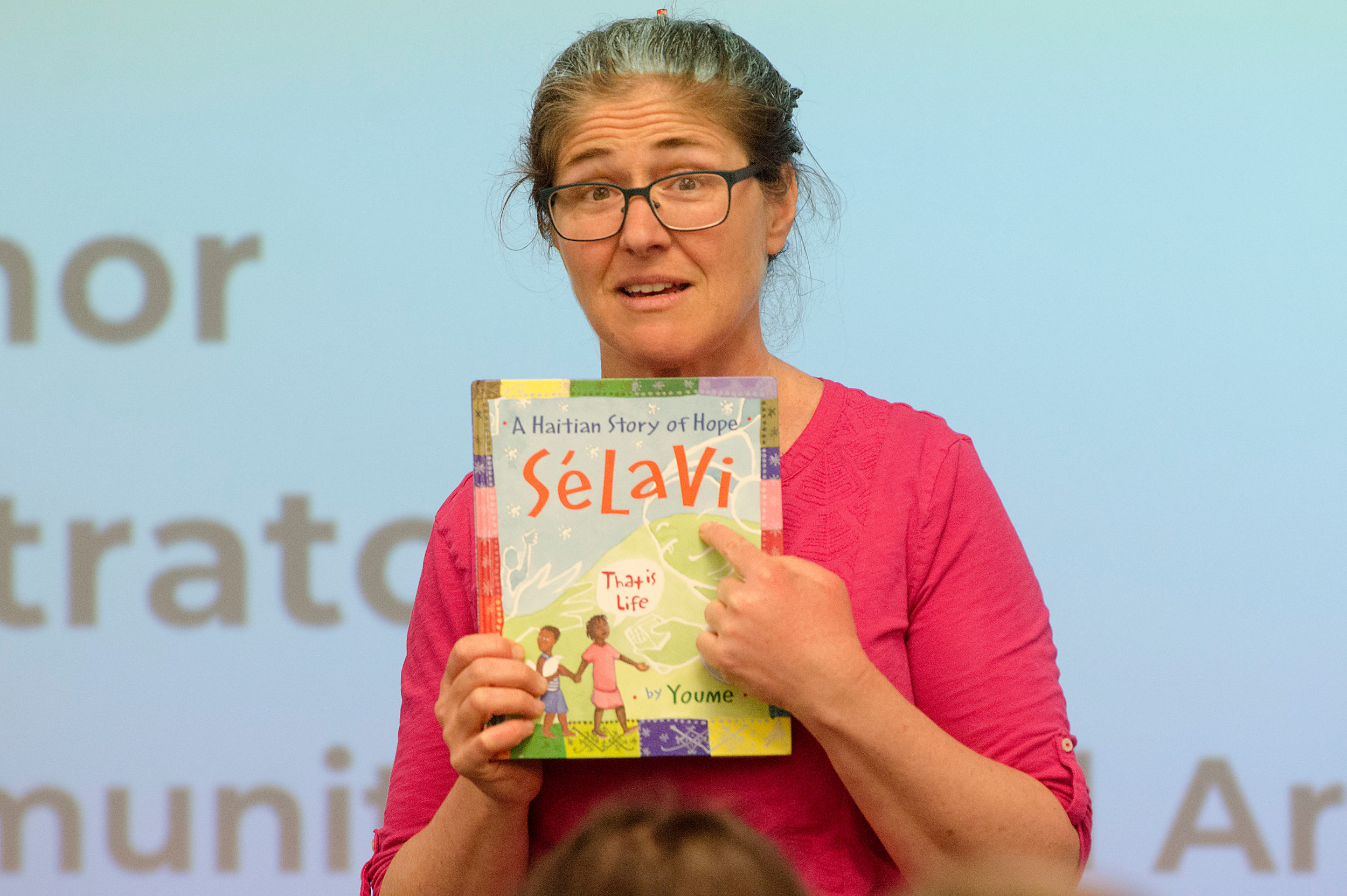 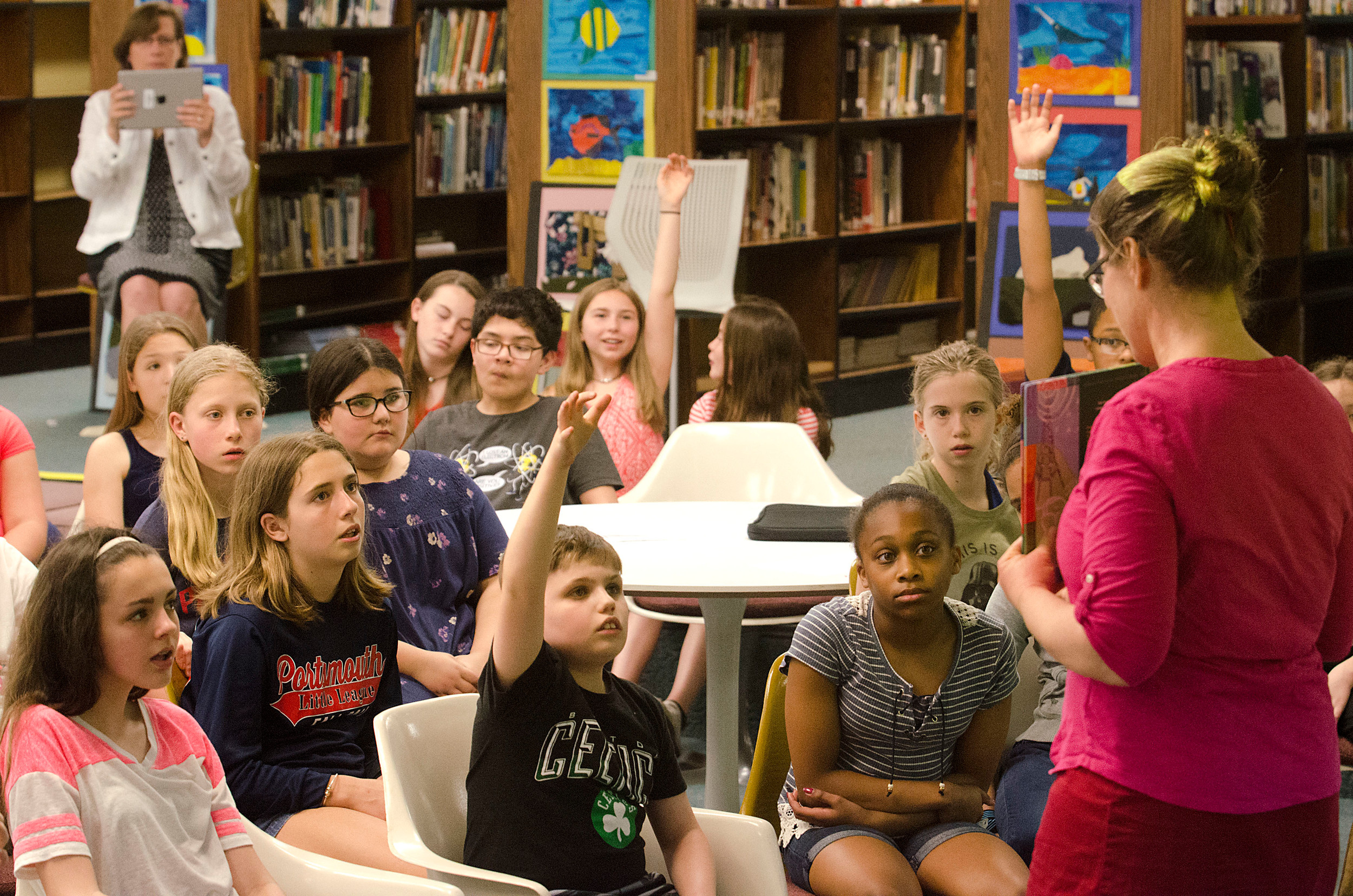 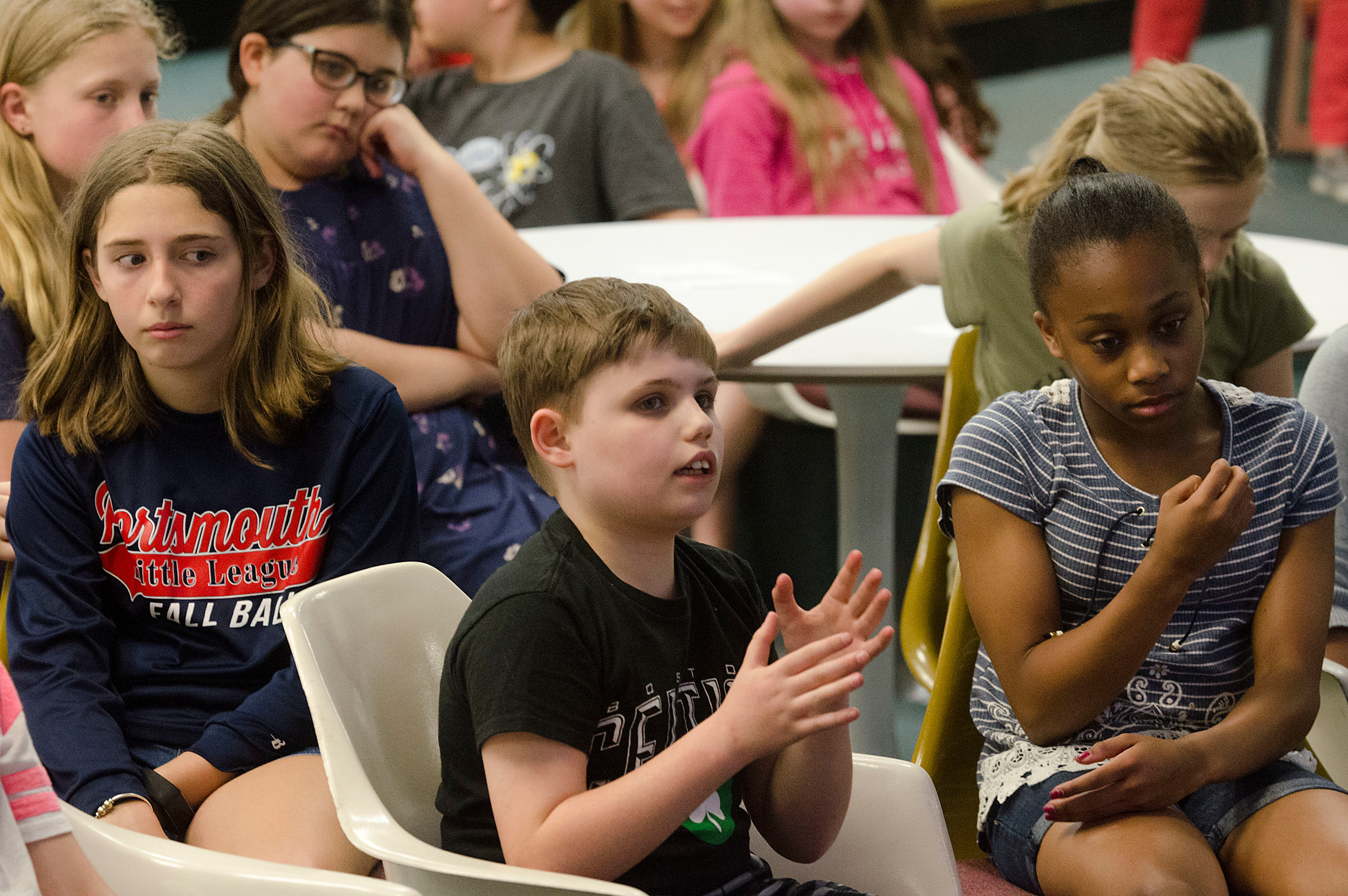 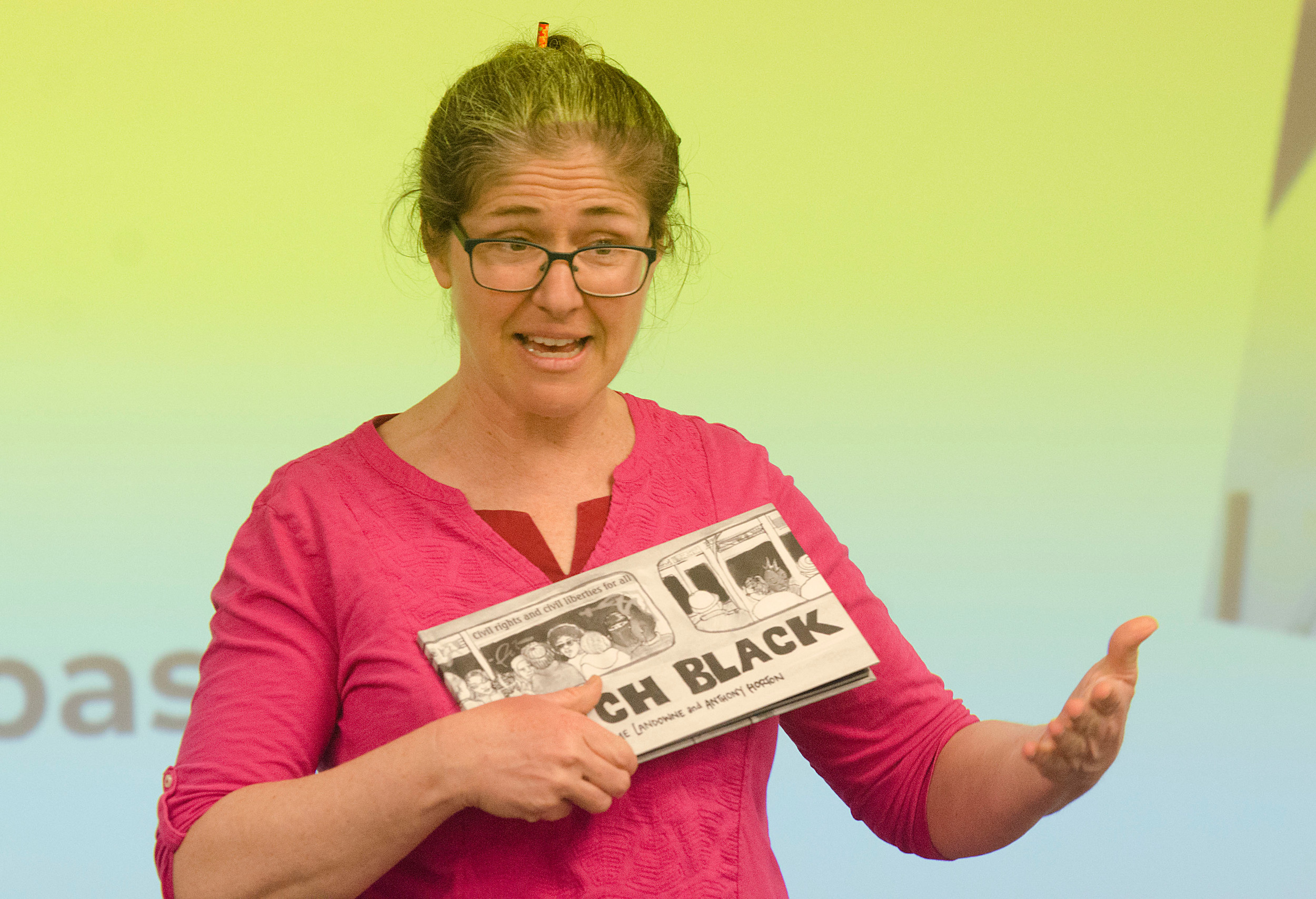 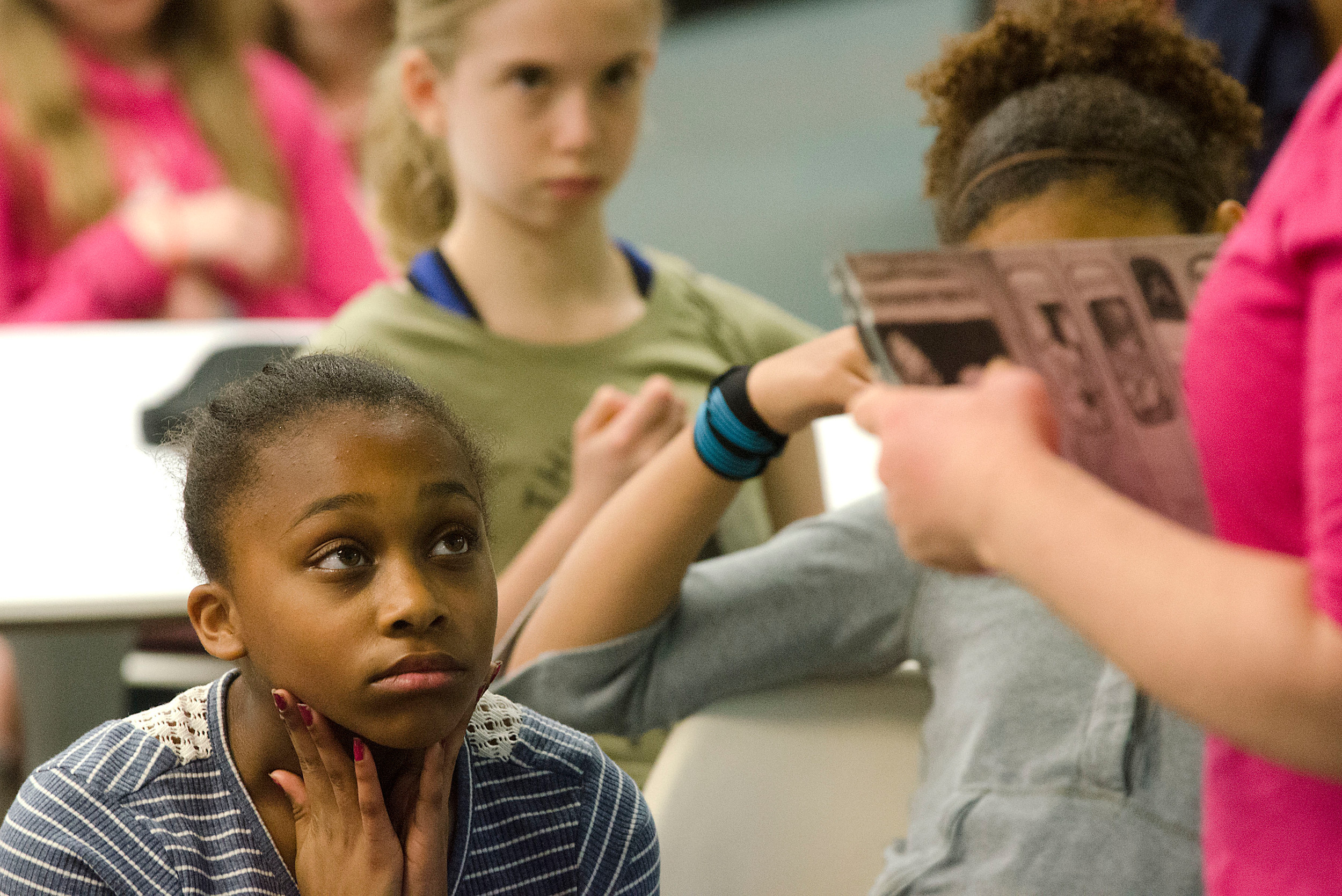 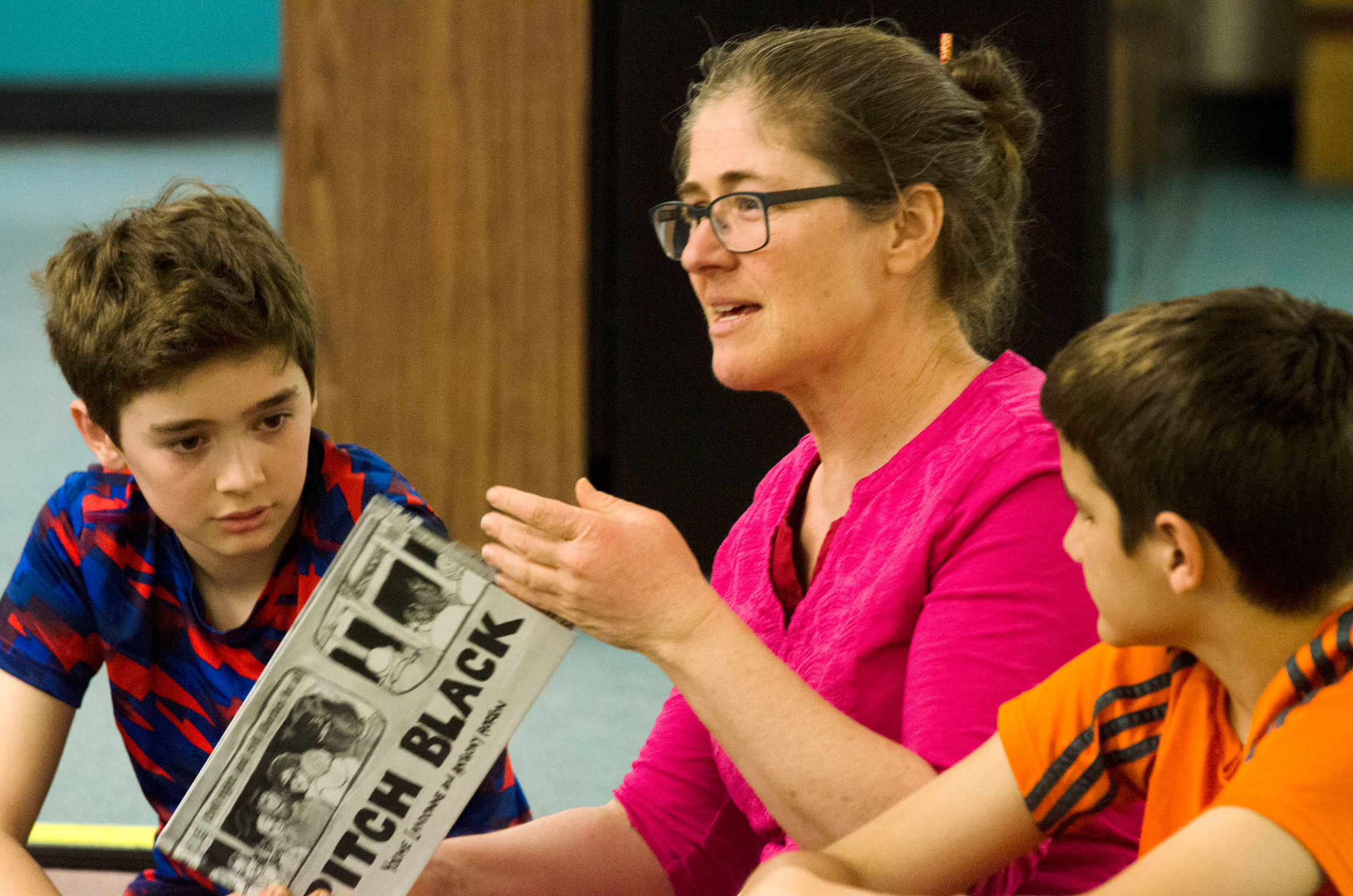 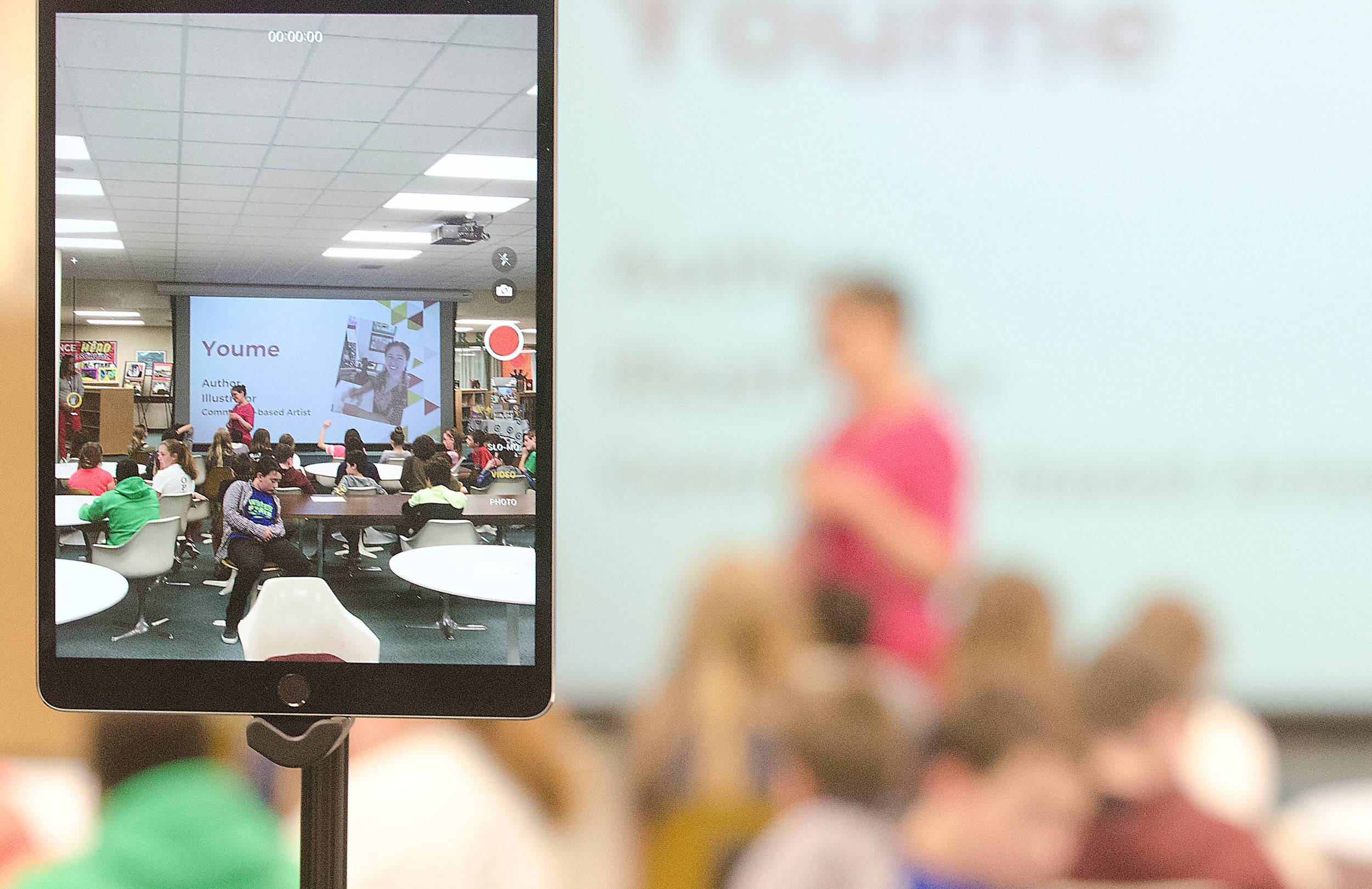 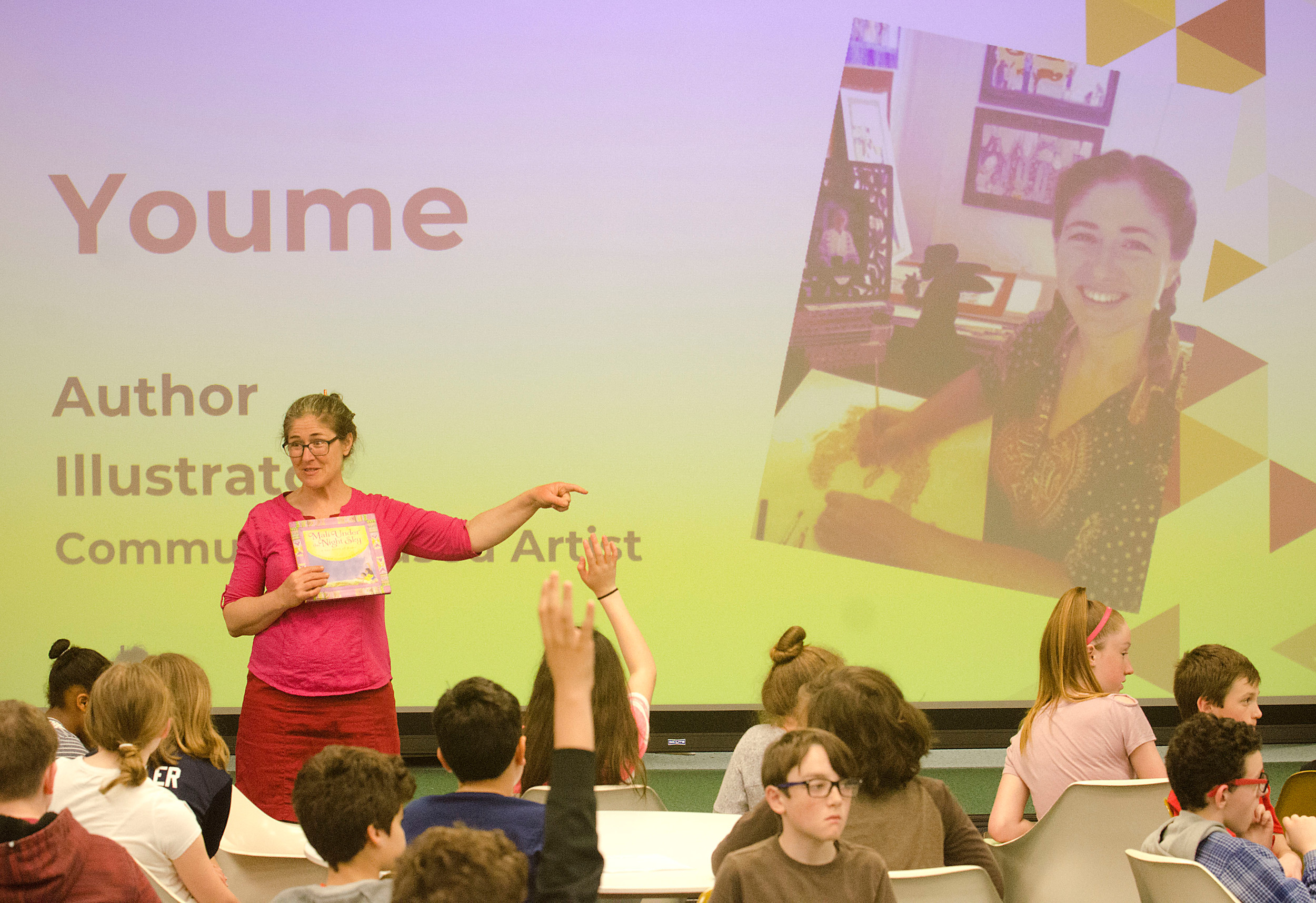 They read books all the time, but they don’t necessarily know the people who are writing them.”
Alyssa Taft, Portsmouth Middle School's library media specialist
By Jim McGaw

“They read books all the time, but they don’t necessarily know the people who are writing them,” she said.

That was the thinking behind Friday’s inaugural All Day Audible With Authors Event, which personally introduced kids to a host of authors whose books are found in the school library, in classrooms and backpacks.

“We organized 23 different authors, some in person and some who video-chatted through Skype. Every single ELA class in our building has gotten to interact with an author for at least 15 or 20 minutes,” Ms. Taft said. “It’s super interactive — getting authors in front of the kids so they can actually ask questions.”

The 722 students in grades 5 through 8 spent a total of 785 minutes interacting with authors who have written in a wide variety of genres: science fiction, historical fiction, creative nonfiction, novels in verse, poetry graphic novels and more.

Most of the authors — including Rhode Island’s poet laureate Tina Cane — spoke with students through Skype or Google Hangouts from all parts of the country and in different time zones. Three authors, however, met with students in the flesh: Steven Krasner, Molly Booth and Youme Landowne.

The event sprang from a years-long tradition called March Into Reading, which was hosted by Salve Regina and brought different authors into the schools.

“PPEF (Portsmouth Public Education Foundation) gave Heather Baker, who’s an eighth-grade teacher, a grant to give to March Into Reading,” Ms. Taft explained. “This year, however, Salve’s not putting that event on. We had the grant to bring authors in but we couldn’t do it through the Salve program, so this is what we came up with.”

The school’s PTO also awarded a grant specifically so students could Skype with Neal Shusterman, author of the New York Times’ best-seller, “Scythe.”

Ms. Landowne, a writer, illustrator and community-based artist, is known on her book jackets simply as Youme — her parents’ amalgam of “you” and “me.” She met in the school library with a group of sixth-graders who peppered her with questions for 30 minutes:

• Why do you write and draw pictures? “I don’t know. It’s what I always did and I can’t stop doing it,” Youme replied.

• Do you prefer writing or drawing? “I feel like they’re very similar,” said Youme, before adding that pictures can express “what you can’t say in words.”

• Where do you write? “On a piece of paper. Just kidding; I have a big table at home.”

• If you weren’t doing this, what would you be doing? “I’d probably be sleeping.”

Youme talked about her first book, “Sélavi (That is Life): A Haitian Story of Hope,” which was published in 2005 and took her seven years to complete. Based on real characters, the award-winning book is about a homeless child who’s befriended by other children living on the streets in Haiti.

Down under the ground

Homelessness was also the topic of her 2008 graphic novel, “Pitch Black: Don't Be Skerd,” which she co-wrote with Anthony Horton, its subject.

“All of my books are based on true stories,” Youme said.

Mr. Horton was an artist who lived underground — in the New York City subway system, where he “found solace in the blackness of the tunnels,” the New York Times wrote.

Tragically, Mr. Horton — the same newspaper called him “among the least faceless” of the city’s homeless — died in a fire along the F line near 63rd Street and Lexington Avenue in 2012. He was 43.

One student told Youme that “Pitch Black” meant a lot to him. “I call it a celebration of humanity,” he said.

The author was impressed. “Can you write that down on a piece of paper? I’ll try to get it on the book,” she said.

Recalling the days as a young girl, when she stapled homemade books together and even wrote her own reviews, Youme urged any budding authors to never get discouraged and to tell their stories any way they could.

“You can publish something by just putting it up on a wall, so you can get something published, too,” she said.