EAST PROVIDENCE — The School Committee at its Tuesday, June 14, meeting approved a slew of key contracts for hires in positions both new and old within the East Providence School Department, … 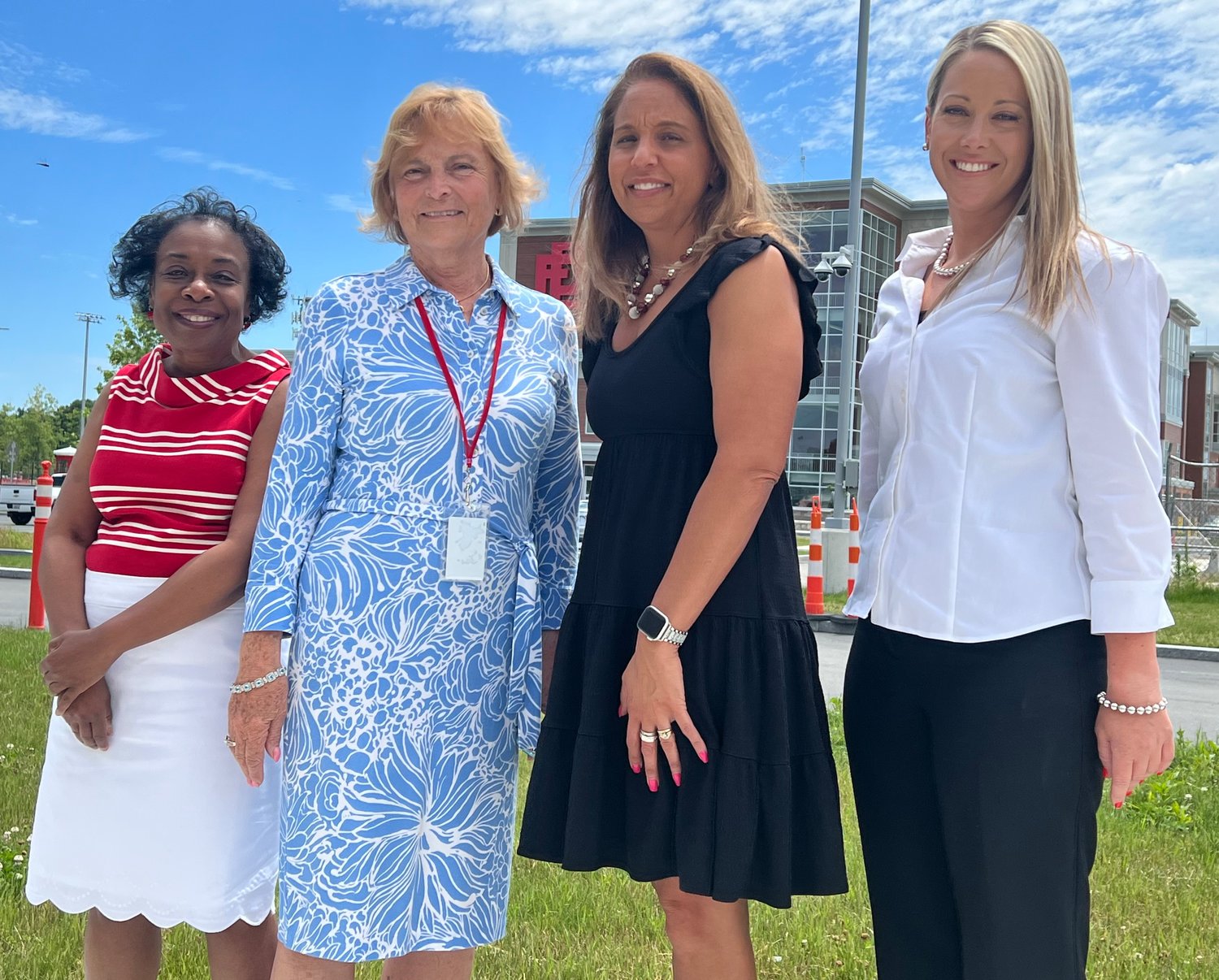 The school district's current central office team of Assistant Superintendent Dr. Celeste Bowler, Superintendent Kathryn Crowley and Assistant Superintendent Dr. Sandra Forand (from left to right) gathers with future colleague Lindsey Reilly. Crowley will relinquish day-to-day oversight as the top administrator to Forand next Friday, July 1, with Bowler staying on in her existing role and Reilly taking on the new position of Director of Teaching and Learning. Crowley will serve as a consultant until her contract expires in January 2023.

EAST PROVIDENCE — The School Committee at its Tuesday, June 14, meeting approved a slew of key contracts for hires in positions both new and old within the East Providence School Department, including the newly created role of Director of Teaching & Learning that replaces one of the two assistant superintendents jobs.

Director of Human Resources Mark Williamson, himself just brought on board during the current 2021-22 term, announced the employees hired for their respective roles, notably that of Lindsey Reilly to the newly created Director of Teaching & Learning.

Reilly just completed her fifth year as principal at Hennessey Elementary School and worked previously as the transition coordinator at Hennessey and Orlo Avenue Elementary for three years.

Dr. Celeste Bowler, whose main focus has been on the Pre-Kindergarten and elementary levels, is staying in the central officer as an assistant superintendent.

Reilly’s new job is in place of the old assistant superintendent’s position held by Dr. Sandra Forand, who was promoted this past April to the district’s top administrative post upon the pending retirement of Kathryn Crowley. Forand will take over day-to-day oversight of the district on July 1.

Crowley’s seven-plus year tenure as super will conclude upon the end of her current contract in January 2023. She’ll stay on as consultant, guiding the district through the next stage in the process of the planned remodeling of Martin Middle School and Waddington Elementary School.

After Forand was chosen as the new superintendent of the district she recommended one of her two aides be denoted with the specific job description and title of Director of Teaching & Learning, emphasizing that person’s position as the main conduit between the administrative and staff on the topics of instruction and curriculum.

“I wanted the position because it will have a singular focus on teaching and learning while Celeste and I tend to be spread out around a lot of different issues,” said Forand, adding of Reilly. “Lindsey will have the opportunity to focus on just teaching and learning and we thought that is really important to continue to move the district forward.”

Forand continued, “We had an interview committee composed of a lot of different stakeholders in the city and Lindsey definitely came out the process as the leading candidate. She brings a lot experience not only as a school principal, but also as a coach. She has a background in reading, all things that are really important to the position. And she’s an excellent facilitator, which is a lot of what this position will be doing, facilitating curriculum, pedagogy. She’s a great fit for the position and we’re really excited to have her.”

Reilly spent her first three years in the district as a “coach” at Orlo and Hennessey, which had been deemed at the time as “priority or transformation schools.” Reilly said taking the new position allowed her to remain in the district while expanding her professional interests.

“I have been in the district eight years so I was interested in staying here,” Reilly explained. “I feel there are a lot of good people doing good work that I wanted to continue being a part of. And I was interesting in doing the work because I’ve had an opportunity here as sort of a coach role, as a building leader and I felt I identified with the things needed to do in the job and I felt like I could make an impact.”

As for Bowler, she expects her job description, if not her title, to change somewhat as the new central office setup actually begins to take shape, meaning she’ll likely be more involved at all levels, including middle and secondary.

“The change has happened and it’s been fairly quick, so we have not had the time to sit down and identify specifics, but we have pretty much decided that many of the duties I currently have will continue and as Sandy said some duties will expand.”

Whiteknact update
Another note related in part to the elementary level in the district, when Laurie Marchand was named as the new Martin Middle School principal earlier this year, her announced replacement in the same post at Whiteknact Elementary Matthew Russo shortly thereafter rescinded his acceptance of the job and creating the need to reopen the search.

At last week’s committee meeting, the administration announced the hiring of Tonianne Napolitano as the new Whiteknact principal. Napolitano comes to East Providence after a most recent stint as principal of Scituate Middle School. She also serves as an adjunct professor at Providence College in the Graduate School Administration Program.

Feola’s finale
District Director of Facilities and Security Tony Feola made his final appearance before the committee after previously announcing he would be retiring following a 30-year career holding various roles within the department.

The committee approved a contract for Christopher Murphy to become the new Director of Facilities. Murphy was brought on this past year as the first-ever full-time physical plant manager for the new East Providence High School building.

More hires
Shane Messier, a former assistant principal at Martin Middle School who most recently served as the MMS interim principal in the wake of Bill Black leaving the building mid-term to become the new East Providence High School, rejoins the aforementioned Black as an Assistant Principal at EPHS, replacing the retiring George “Bob” Currier.

In Messier’s stead at Martin comes long-time district administrator Greg McCarthy was elevated to the MMS assistant principal post. McCarthy began the 2021-22 term as a Science teacher in the building then became interim assistant when Black left for EPHS.

Of note as well, a contract for Alfred Villeneuve to serve as interim Director of Technology was approved. Villeneuve was elevated to the position upon the resignation of for IT director Ben Russell on April 22 of this year.

New advisors
The committee also backed a recommendation of the administration to formally create three new advisory positions for East Providence High School Audio/Visual and Fashion Design clubs as well as a student-led athletic booster group known as “The Herd.” The advisors will be paid the same $843 as contracted with the teachers’ union for similar roles.

The A/V and Fashion clubs saw immediate and significant interest with the opening of the new building, Superintendent Crowley told the committee last week. “The Herd,” which was initiated by EPHS boys’ basketball head coach/assistant volleyball coach and Social Studies teacher Joe Andrade, is an attempt to create a recognized student cheering section for sporting events, potentially traveling to road games for support and creating logos and merchandise.