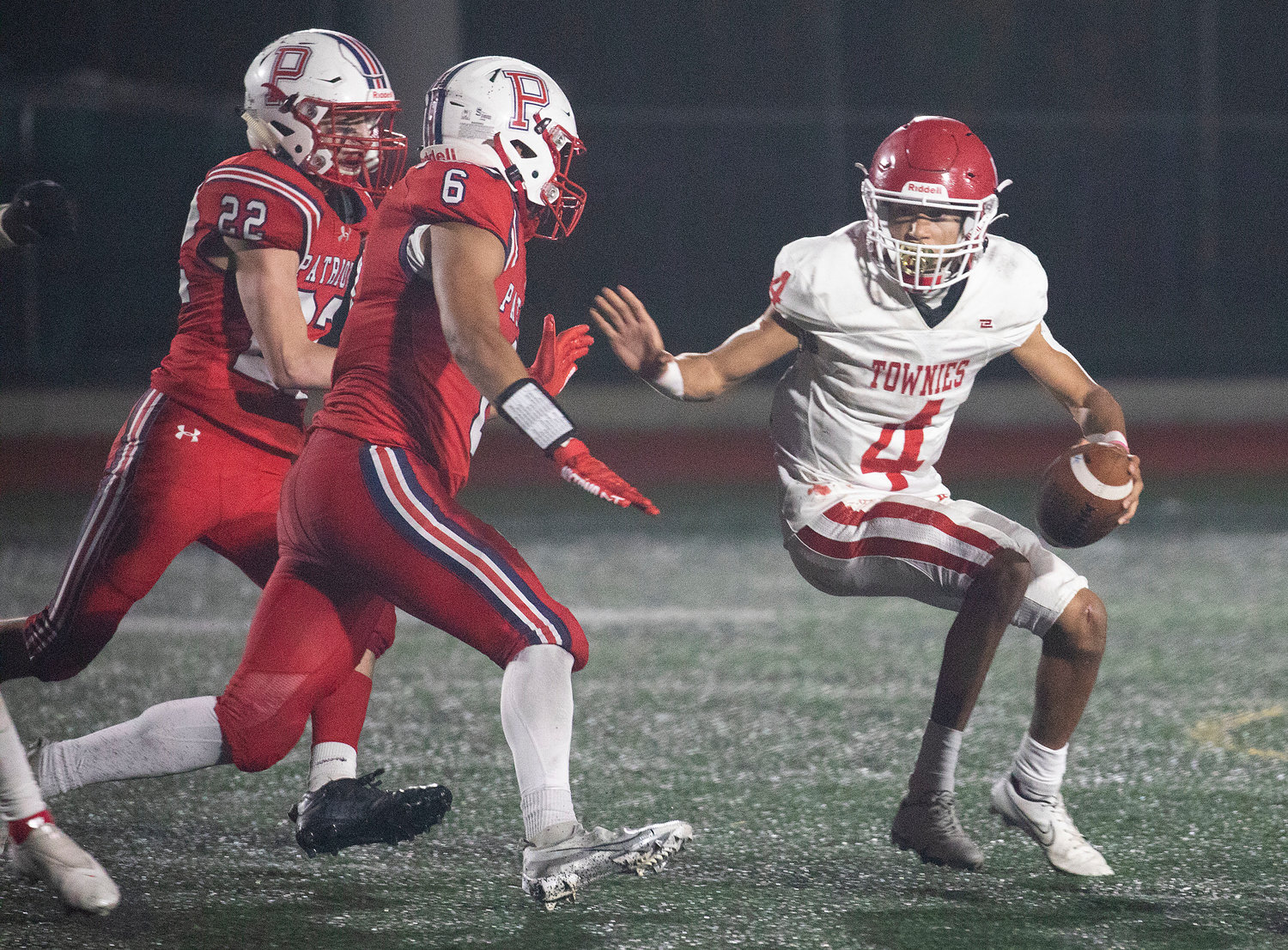 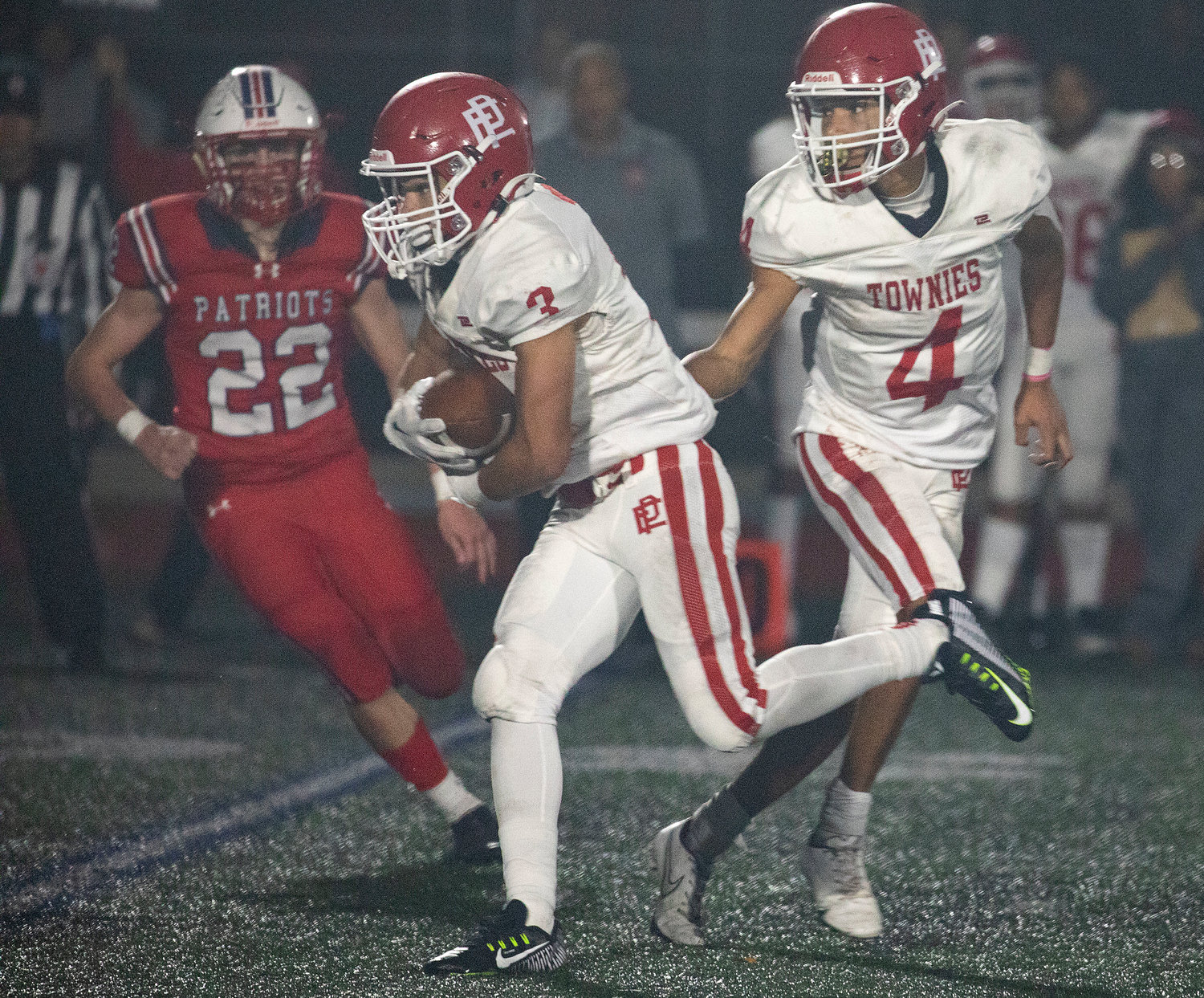 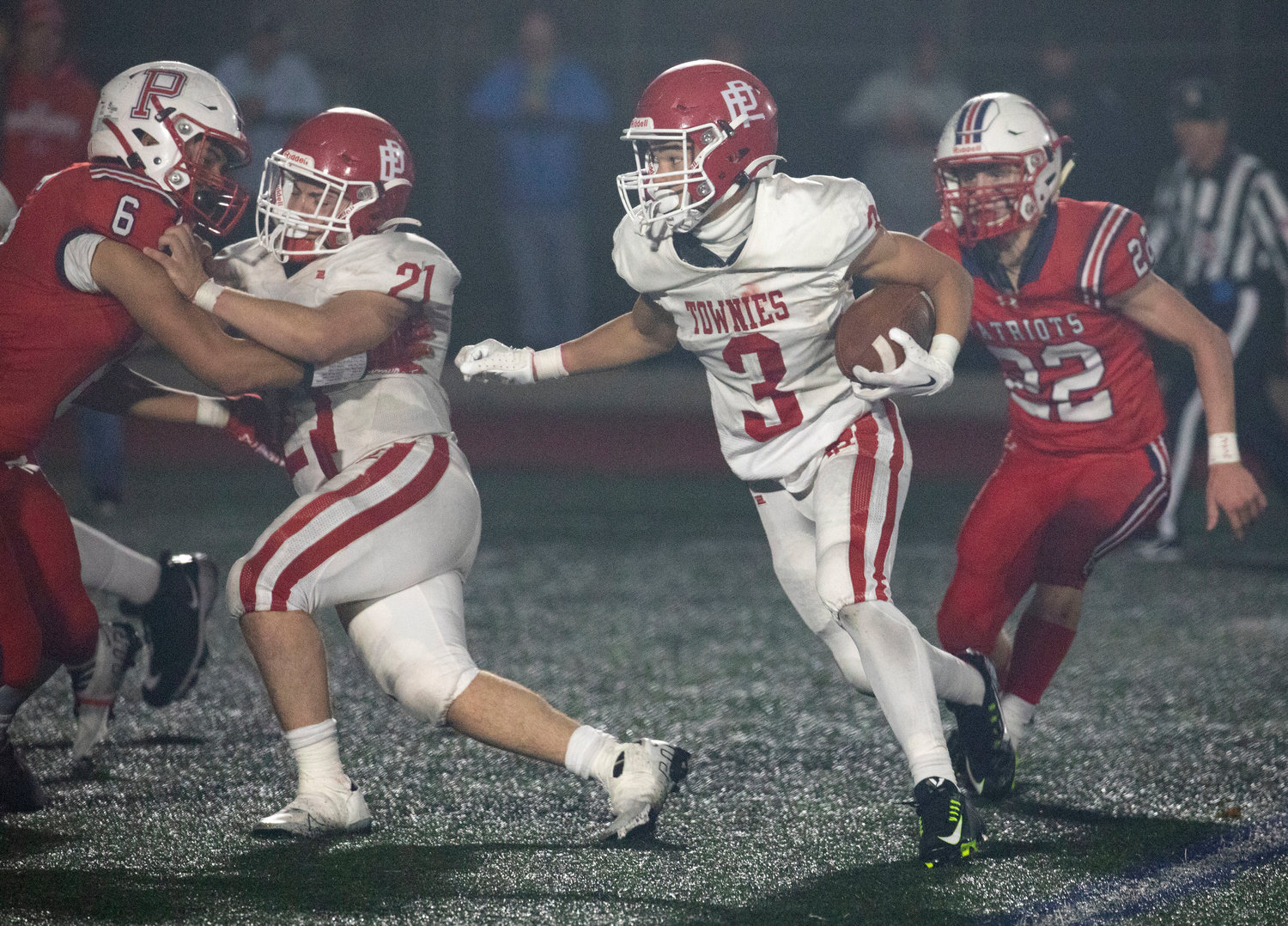 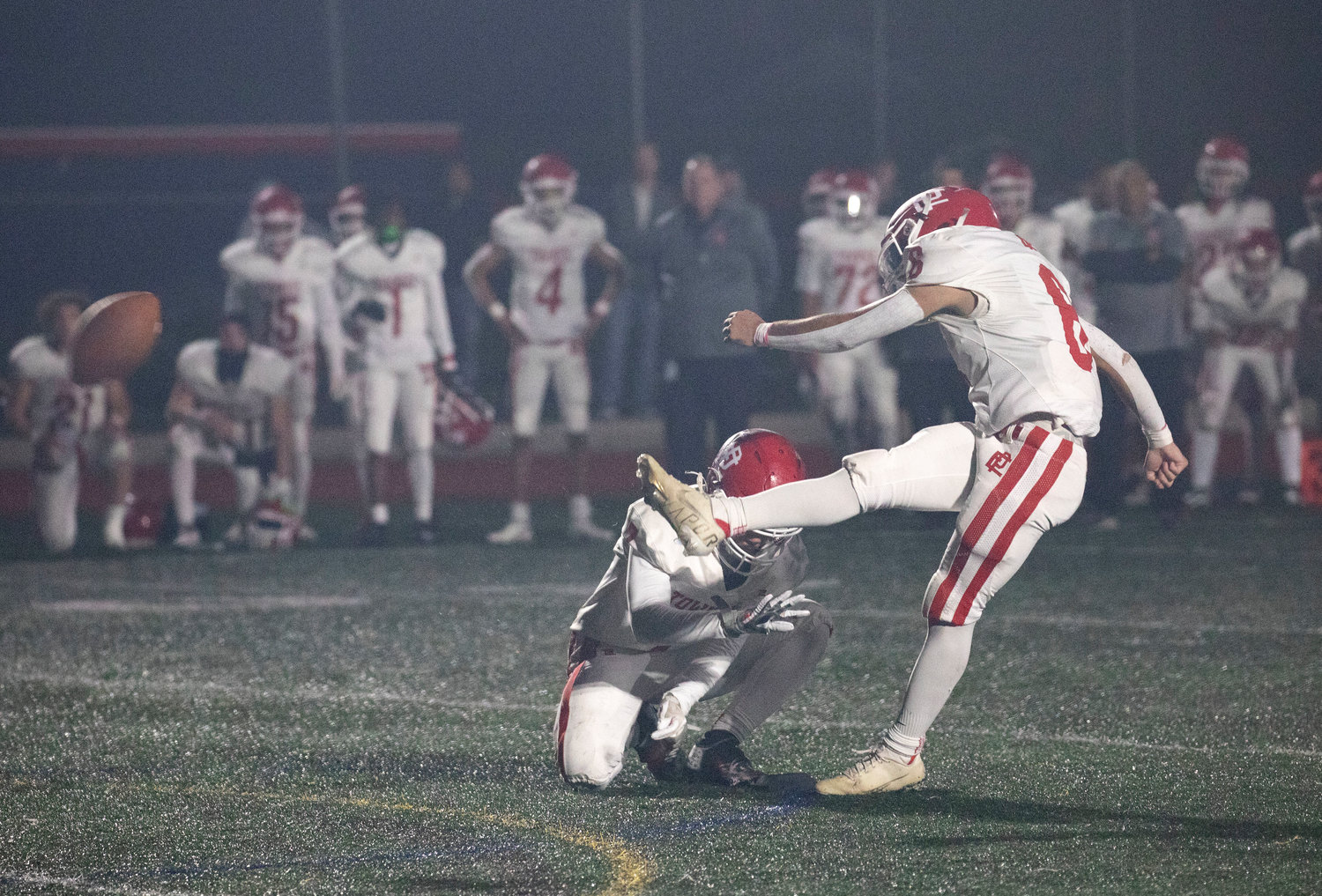 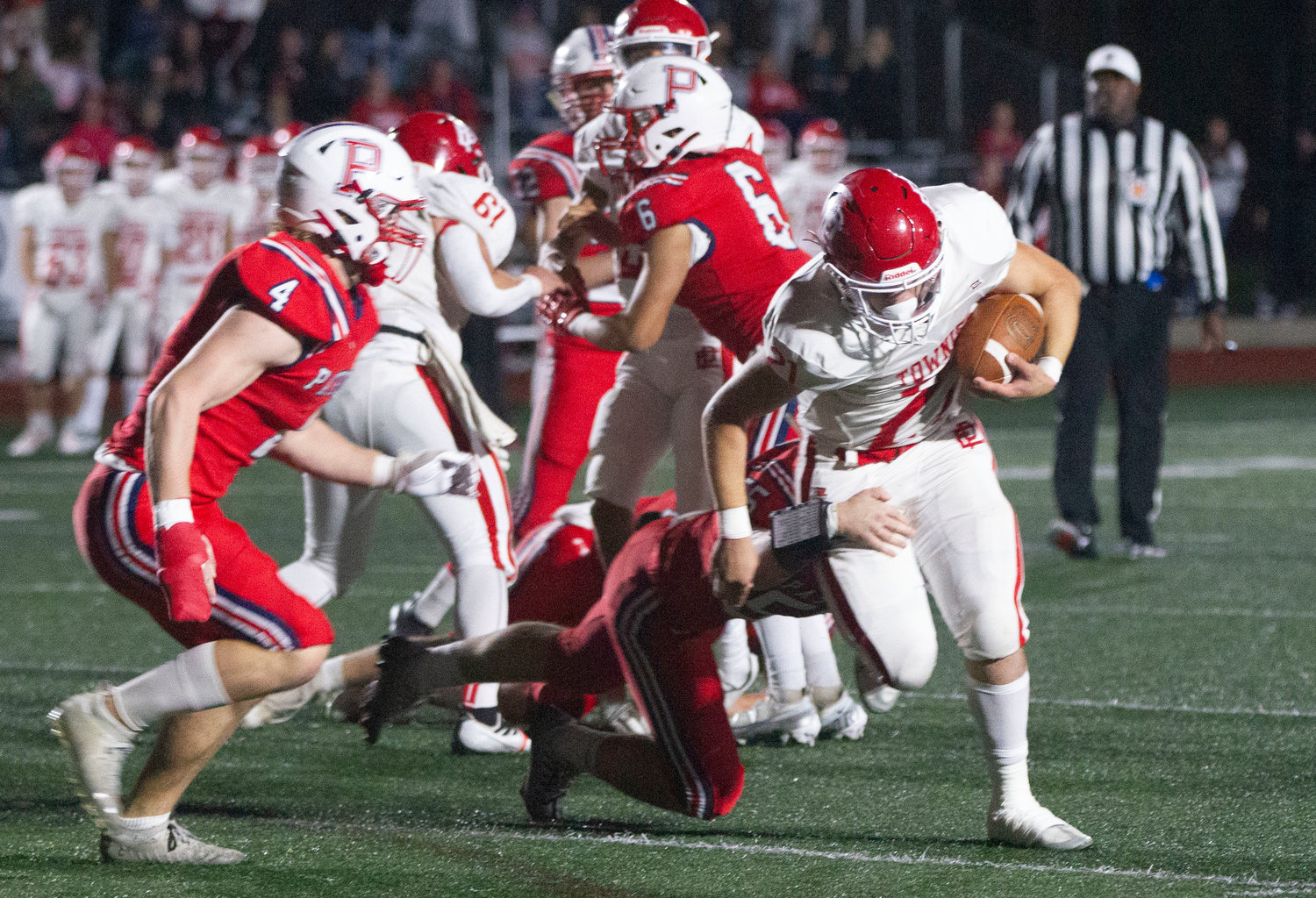 East Providence's Steven Clark Jr., who scored the first touchdown of the game, runs for the Townies against the Patriots. 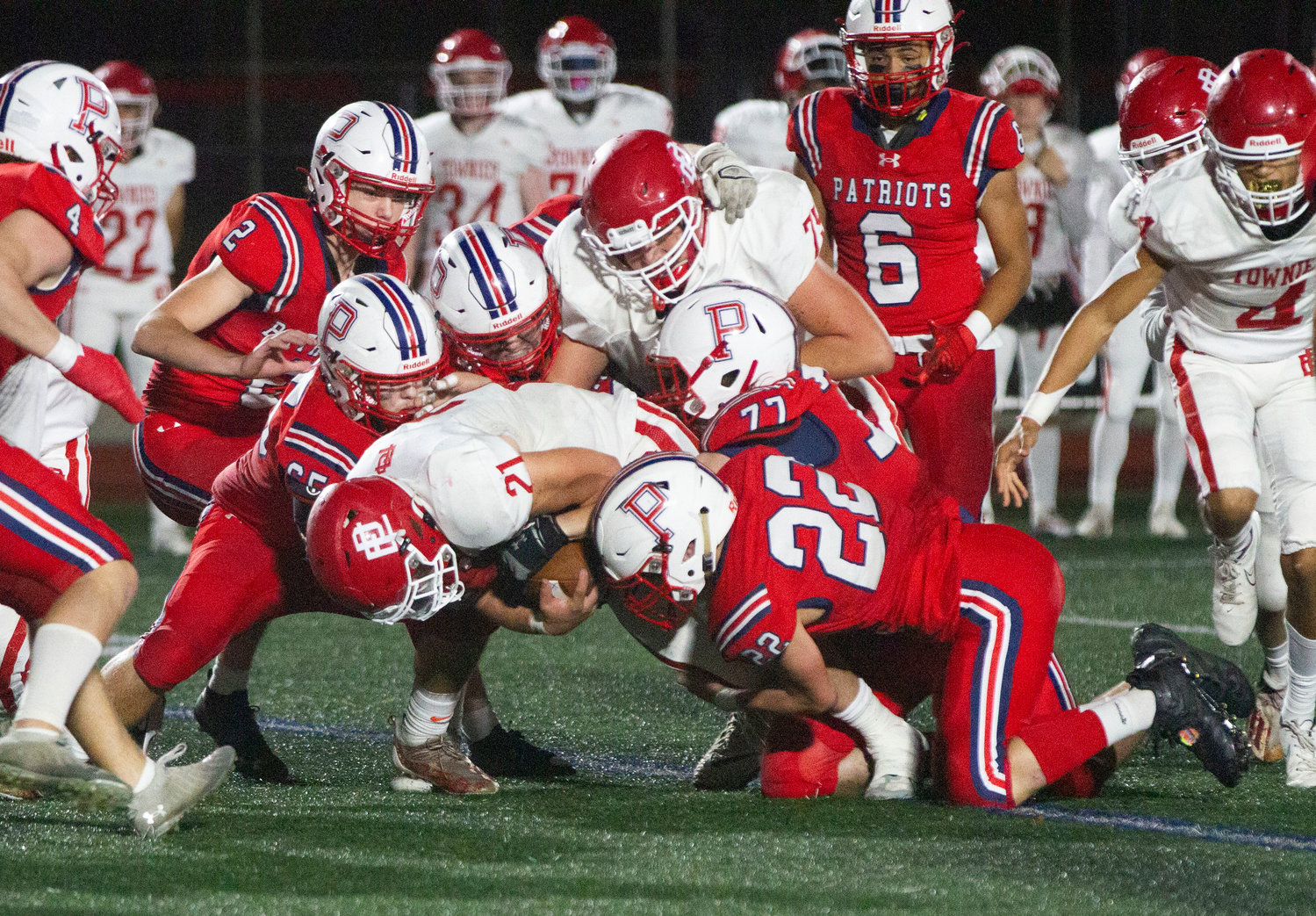 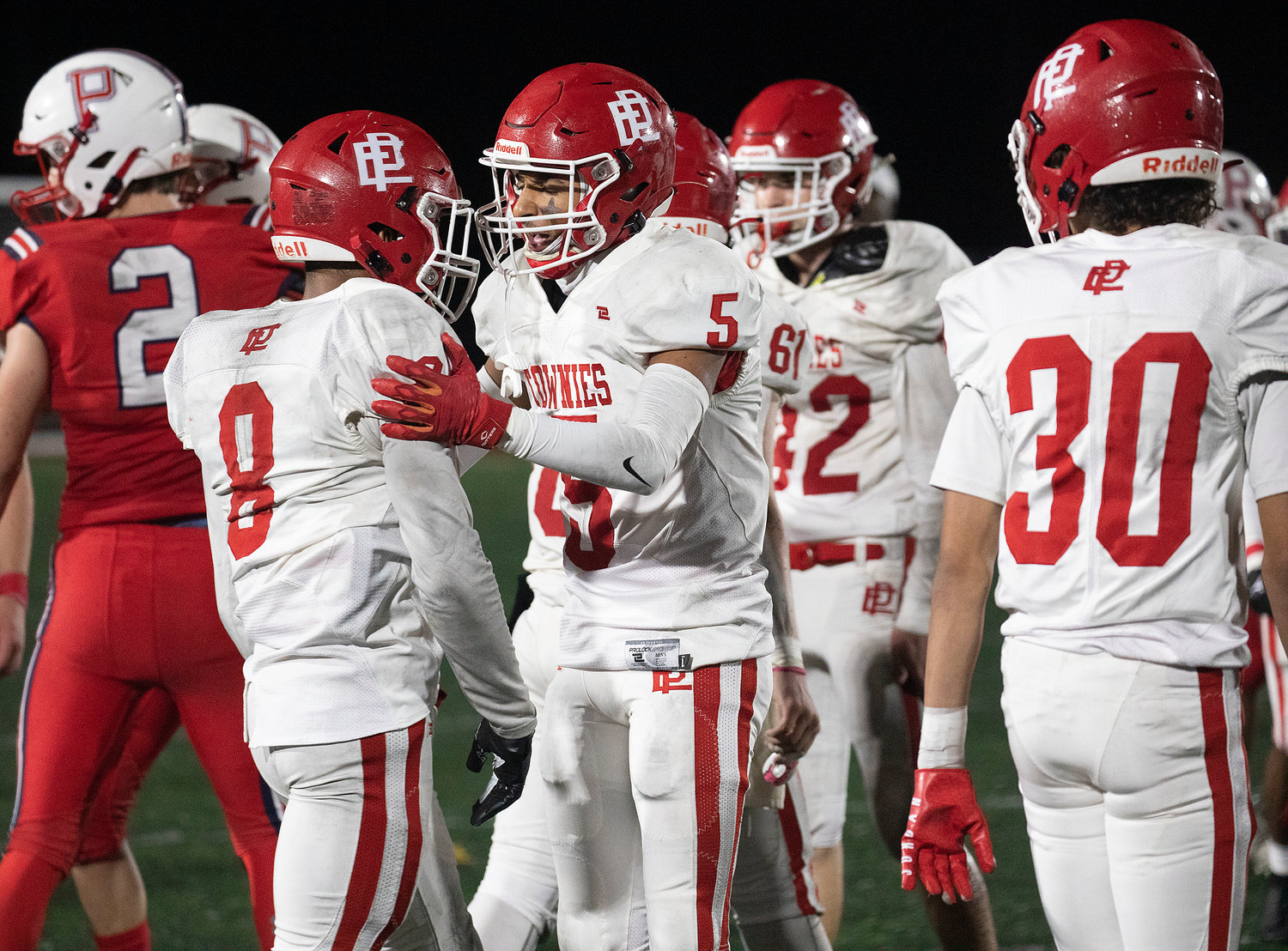 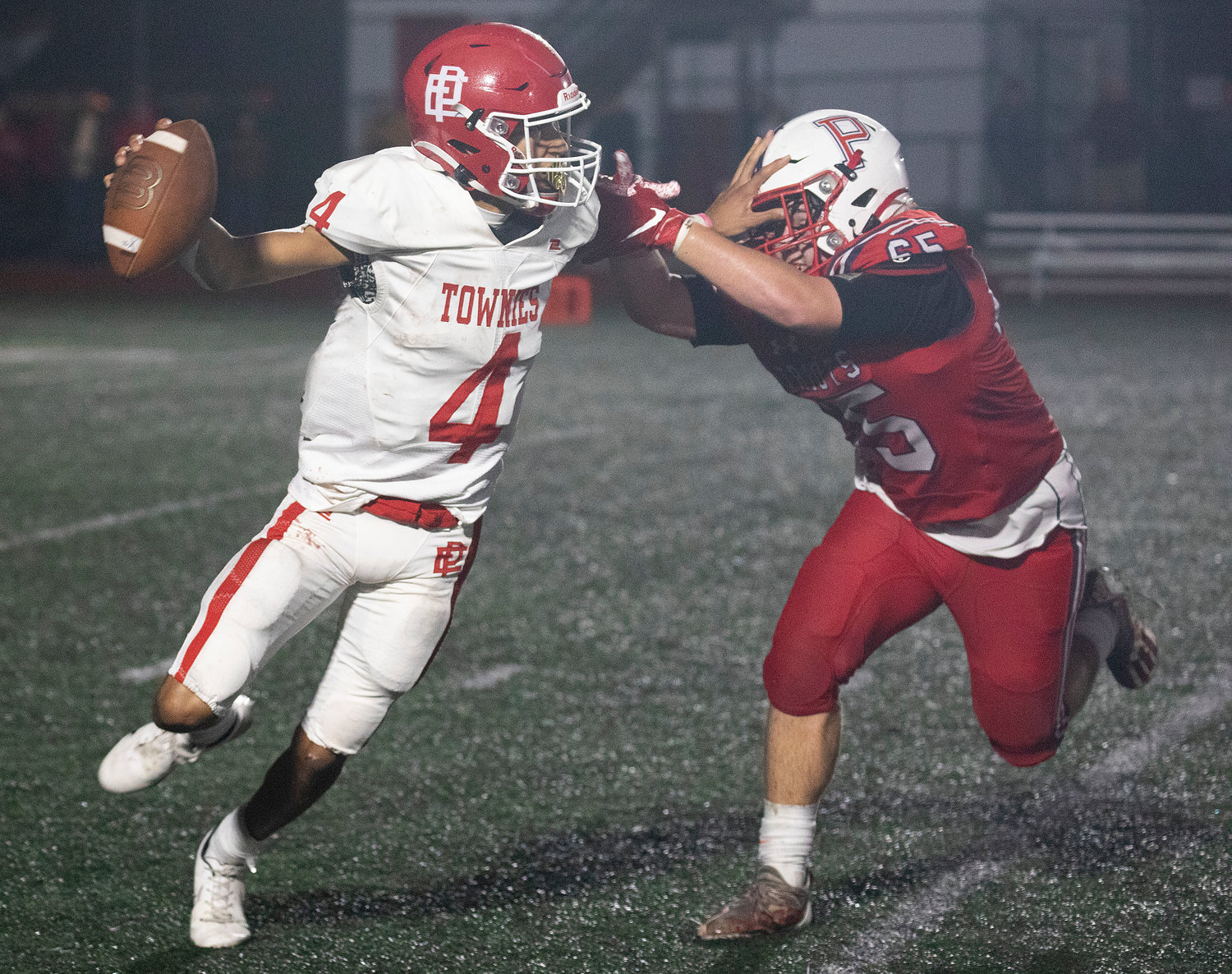 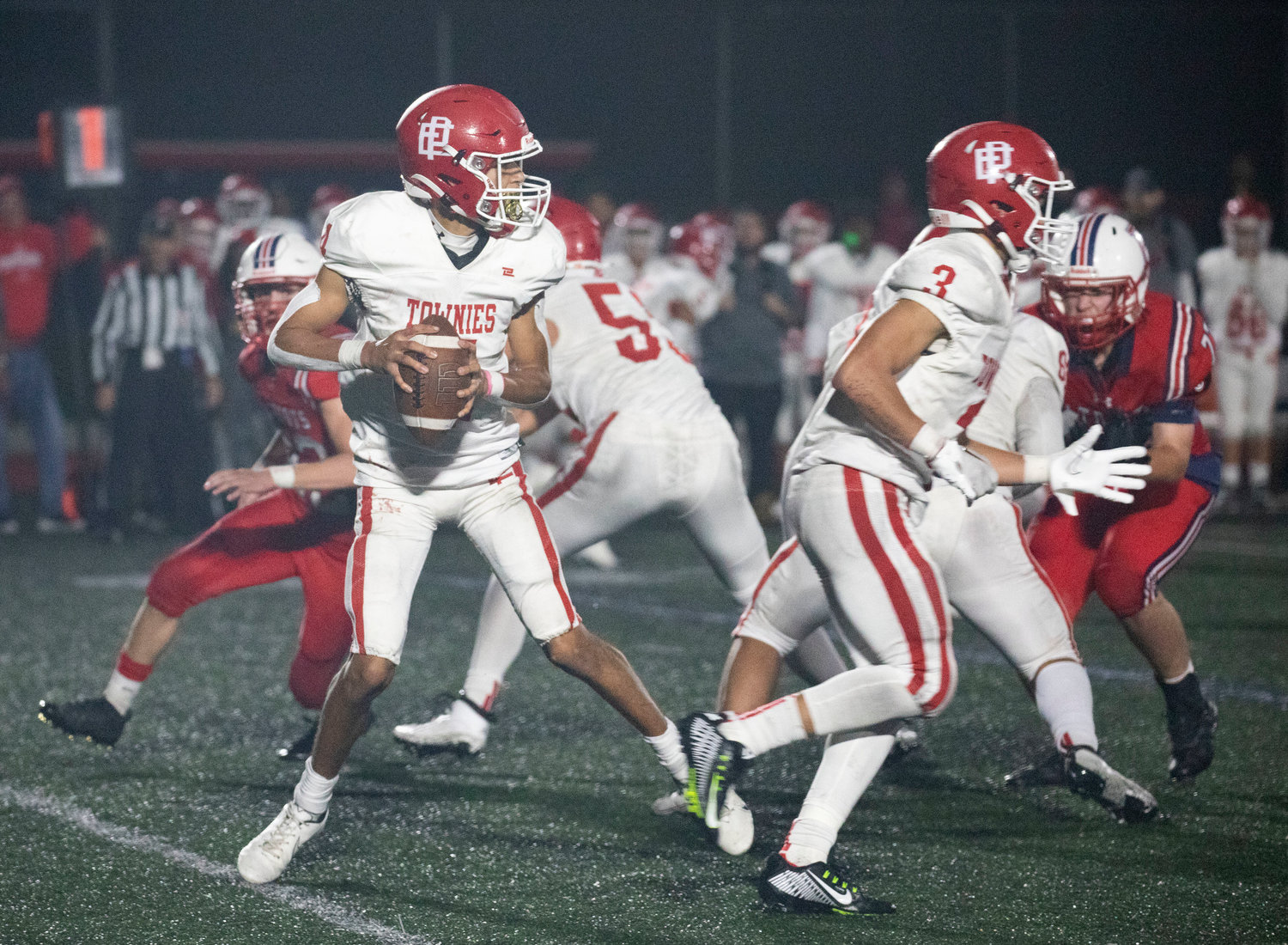 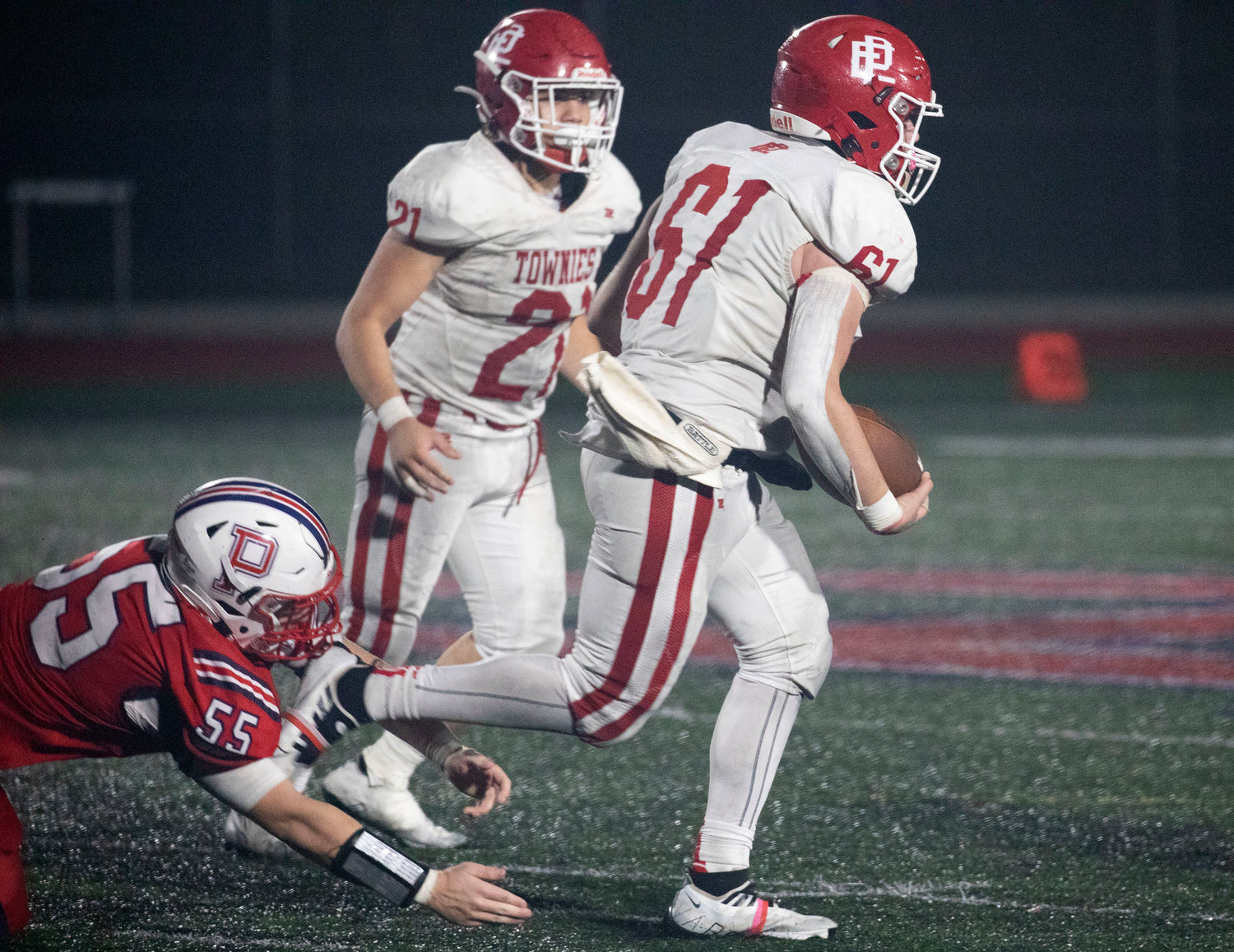 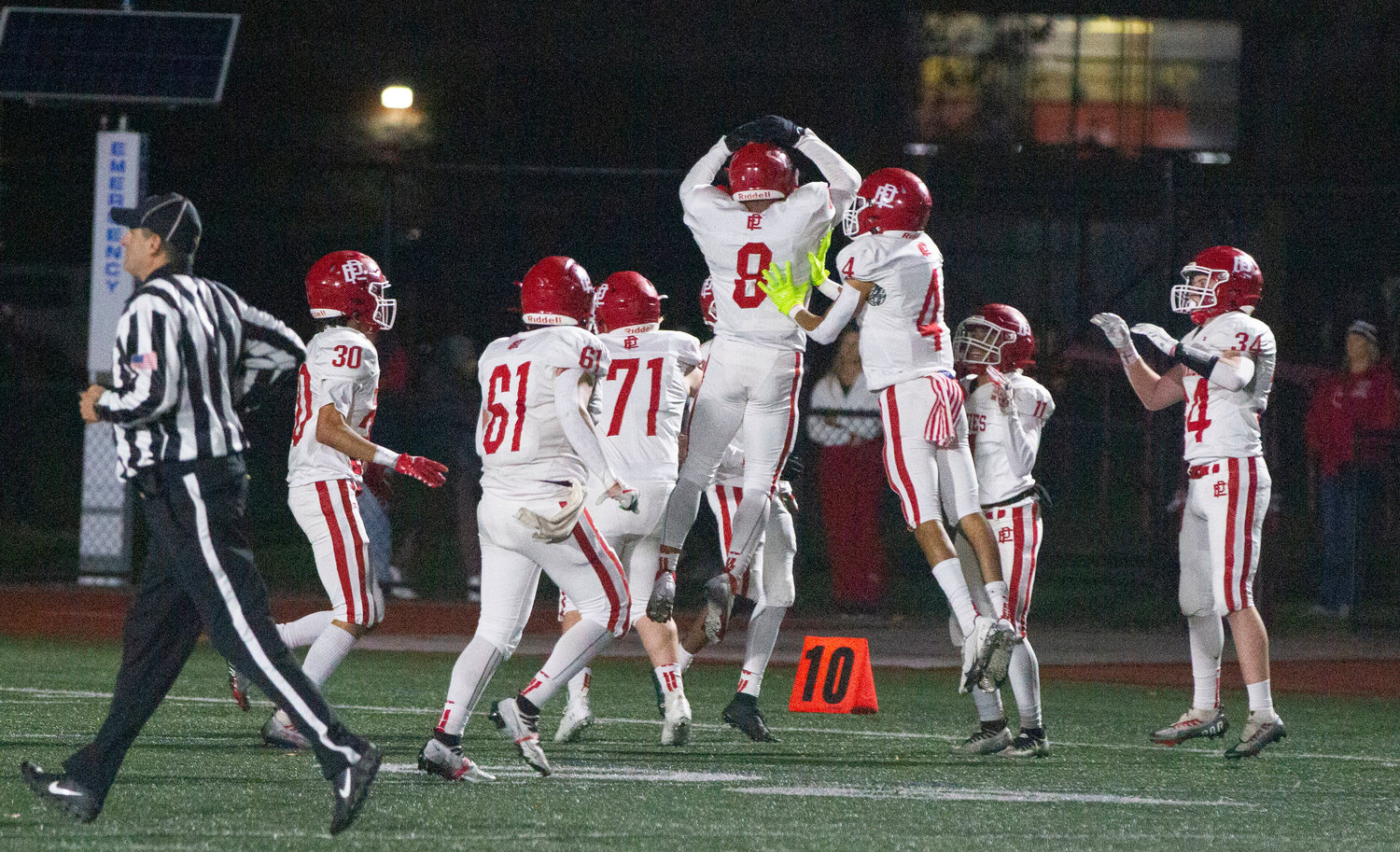 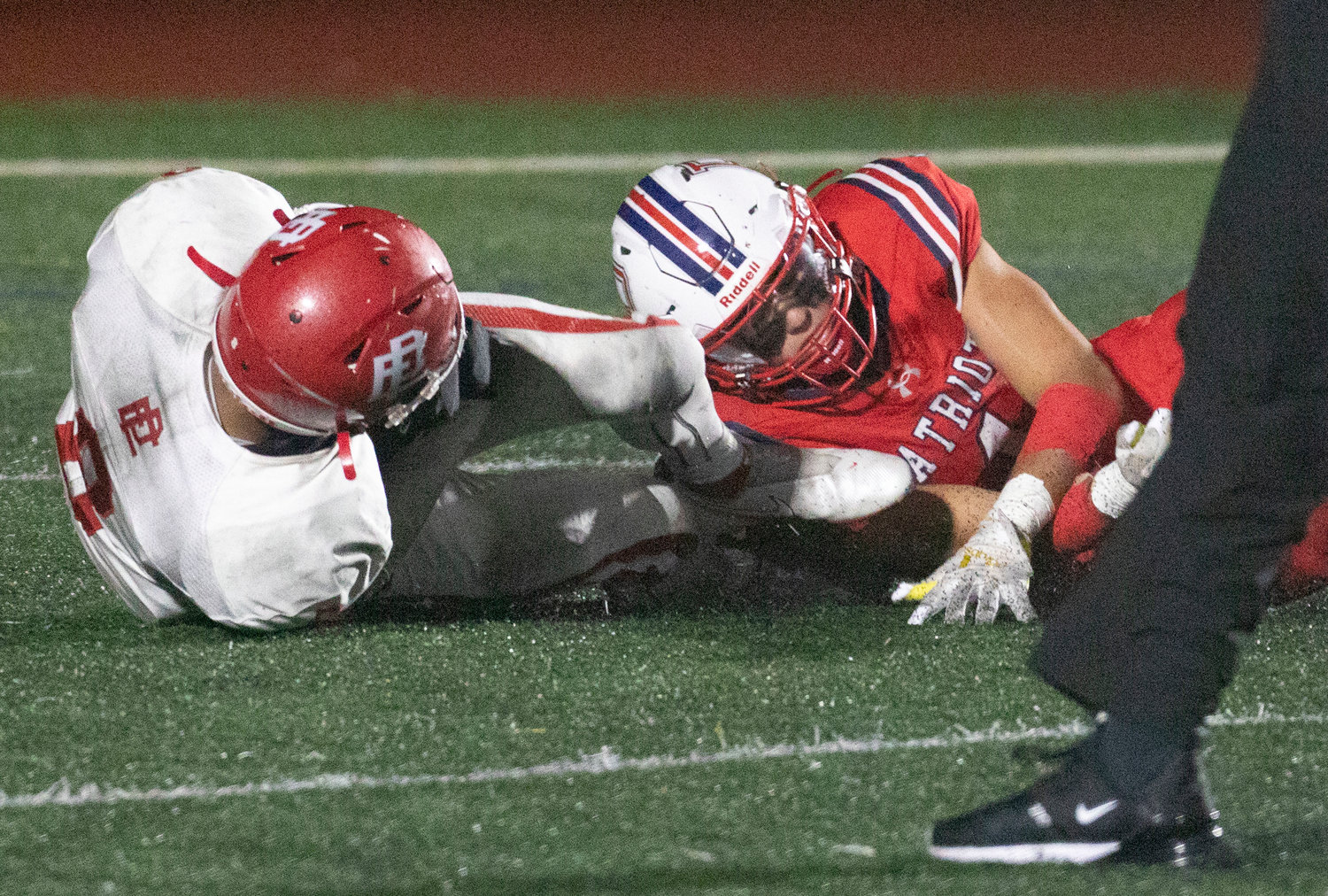 E.P.'s Jahad David Pinto intercepts a Portsmouth pass and returns it for a "pick six." Jahad Davis Pinto recovers a fumble for the Townies in their playoff game against the Patriots. PORTSMOUTH — East Providence High School’s Division II quarterfinal football outing last Friday night, Nov. 4, in Portsmouth against the host Patriots wasn’t so much a tale of a couple of halves, but more like one of a few minutes that ultimately separated the sides in what was an extremely even playoff encounter.

Unfortunately for the upstart Townies, seeded fourth from the II-A side of the league, they came out on the wrong end of a 14-13 decision to the Patriots, the top seed from II-B.

"The kids played hard. We had a good week of practice, a good week of preparation for the game," said EPHS head coach Jon Stringfellow. "We started out well and had some opportunities to add onto our lead, but it just didn't happen for us in the end."

East Providence exploded to a quick lead just over 90 seconds into the game. Portsmouth fumbled the game’s opening kickoff, which the Townies recovered and needed just four plays to convert into the first score of the night. Steven Clark Jr. bursted for the final six yards to touch. The extra point failed, but EPHS was still up 6-0.

A handful of plays later, the Townies found themselves stunningly up 13-0. Jahad Davis-Pinto stepped in front of a Portsmouth pass attempt, returning it 39 yards to the endzone to give the locals a 12-0 lead. The kick for point by Isaac Fox split the uprights, bumping East Providence’s ad to a two touchdown spread with less than four minutes gone by.

The rest of the evening, though, was a frustrating one for the Townies, who had a few more quality opportunities to build upon their lead, but could not.

Instead, Portsmouth was next to score, doing so on a 40-yard touchdown run by Neal Tullson with just under five minutes remaining in the second quarter. The PAT kick was good, leaving the Patriots down 13-7 where the score would remain the rest of the first half.

One of East Providence’s better chances to score in the second half was thwarted by the Portsmouth special teams. The Patriots blocked a Townie field goal attempt late in the third quarter to keep their deficit at six.

The EPHS possession came after Davis Pinto, who had recovered a fumble late in the first quarter, gobbled up another free ball for his third turnover of the night after the Patriots put it on the ground again inside their own 10-yard line.

The Portsmouth defense, likewise, came up big, stiffening to prevent any damage. The Patriots held EPHS out of the endzone on three plays then their special teams blocked the field goal attempt.

Portsmouth didn’t capitalize offensively on its ensuing possession, but would after another key defensive play, an interception of an EPHS pass, early in the fourth quarter.

Shane Harvey eventually scored the tying touchdown mid-way through the period on a five-yard run and kicker George Smith’s second point-after boot would prove the difference.

"It was a hard-fought game between two good teams. Unfortunately, we didn't get the result we wanted," Stringfellow added. "It's tough to take. It's a one-shot deal, lose one and you're out. But our kids played hard."

The Patriots improved to 6-1 in league games to date and host the two seed from II-A, Cranston West, in the semifinals this weekend. The Falcons got past Woonsocket, the three seed from II-B, by a 21-18 count in their quarter. On the other side of the bracket, II-A top seed St. Raphael beat II-B four Shea 14-6 in a meeting of Pawtucket schools and II-B two seed Westerly bettered II-A three Cumberland 20-7.

For the Townies, their 2022 Division II campaign came to a close with an overall record of 3-4, including the playoff loss to Portsmouth. On the fall, EPHS saw its record move to 4-5.

East Providence has one more game left to play in 2022 when the Townies host LaSalle in their traditional Thanksgiving Day morning game Thursday, Nov. 24. Kickiff  is set for 10 a.m.

‘Death with Dignity’ being considered in Rhode Island