What a difference five years made in East Bay real estate, where every price increased in every category in every community

East Bay real estate values increased exponentially during the past five years. The increases were similar to what happened in the rest of New England and nationally, but like politics, all real …

What a difference five years made in East Bay real estate, where every price increased in every category in every community 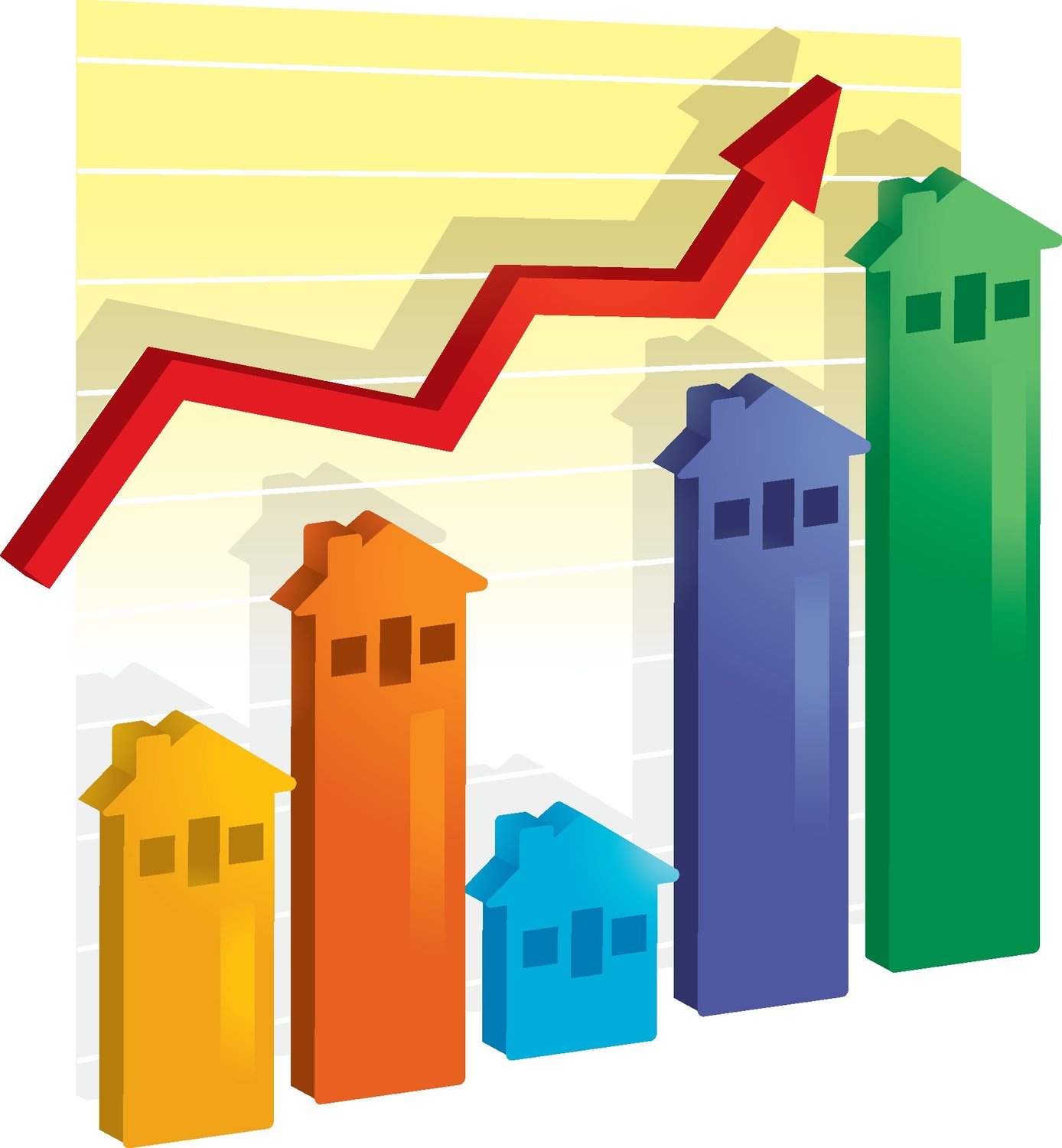 An analysis of real estate sales in eight different East Bay communities shows that median prices have risen dramatically in every category (single-family, multi-family and condominiums) in every community in the past five years. Increases range from 20% to 100%. 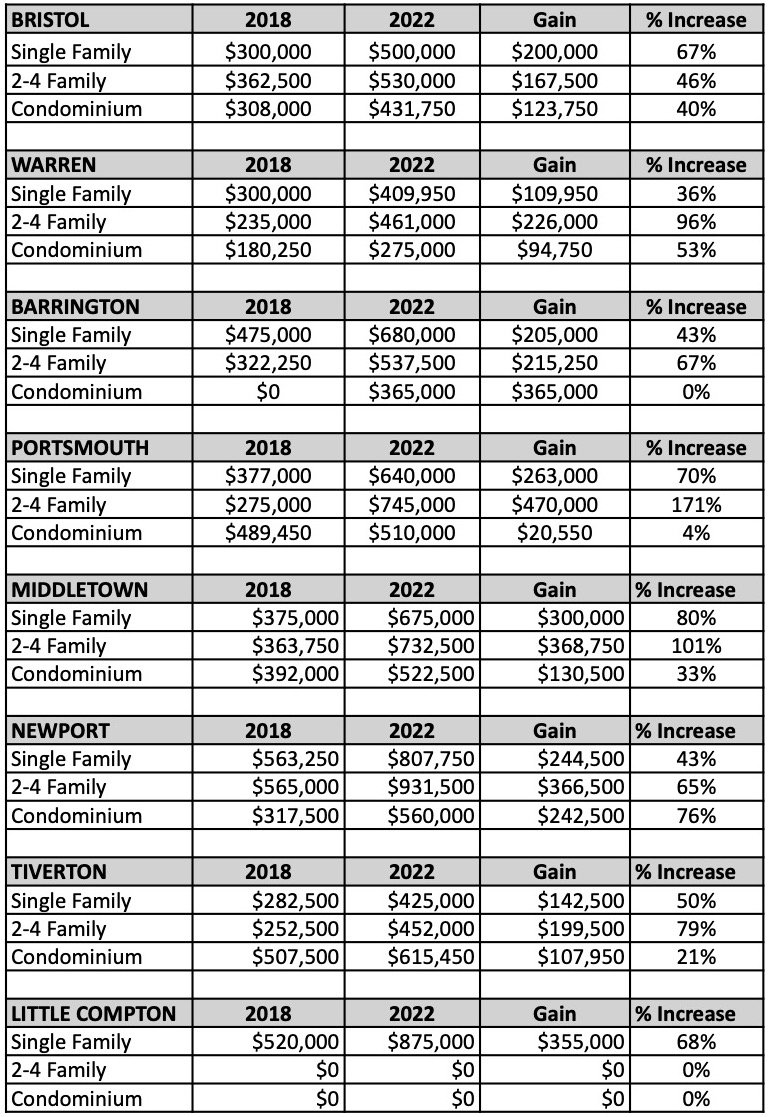 Shown above are the changes in median sales prices from 2018 to 2022 in each community and each category of housing. The greatest percentage increase was in Middletown single-family homes, which increased 80%. Also of note, Little Compton surpassed Newport for the highest single-family home prices in the region (as measured by median sales prices). Single-family home prices increased 50% or more in most communities, including Middletown, Portsmouth, Bristol, Little Compton and Tiverton. The small amount of data, such as for the Portsmouth and Middletown 2-4 family category, may skew percentages larger or smaller than would be seen if more data was available.
Previous Next
Posted Friday, January 13, 2023 7:00 am
By Douglas Gablinske

East Bay real estate values increased exponentially during the past five years. The increases were similar to what happened in the rest of New England and nationally, but like politics, all real estate markets are local.

Taking a closer look at the East Bay, including Bristol County and Newport County (excluding Jamestown) there were some similarities in the local towns, with some surprises. As seen in the chart that accompanies this story (below), which compares the year 2018 with 2022, one similarity is that each town’s residential real estate sector, including single-family, 2-4 family and condominiums, gained in value, which is not always the case.

Many times, one market segment may go up and another may go down, but not in these last five years. In this era, in every community, all three sectors gained in value, as seen in comparisons of median prices. The median reflects the midpoint between the highest and lowest sale price and is not subject to the gyrations of the average, which can swing wildly with just a few sales at the very top or bottom of the sales prices.

Little Compton is the new #1

Little Compton recaptured the title of having the highest single-family prices in 2022, at $875,000, taking it back from Newport, which had led all the communities in 2018. Its rural character, minimum two-acre zoning, privacy, wide open vistas of the Sakonnet River and the Atlantic Ocean as well as rocky coastline create a real estate market that attracts the affluent for ownership of second homes

A review of Little Compton’s tax book reveals that many of the tax bills are sent to addresses from out of state, including Connecticut, Massachusetts, New York, Pennsylvania, the mid-west and beyond.

Newport is a worldwide tourist destination, the playground of the rich and famous, and it enjoys a worldwide seller/buyers’ marketplace. It had the second-highest median price in 2022, which is not unexpected. Even after the 2008 real estate price crash, Newport had the least real estate value losses in the East Bay.

Middletown and Portsmouth are sister communities with Newport on Aquidneck Island and showed outsized real estate value increases. There are two reasons for this confluence in values. One is Newport’s outsized attraction to a larger geographical market and inversely its limited geographical area and few remaining vacant land parcels. Therefore, its real estate demand is trickling off in the adjacent towns of Middletown and Portsmouth.

The second is that all three communities make up an island, offering more waterfront miles and waterview real estate than the rest of the East Bay.

Middletown had the highest percentage increase in price of the eight East Bay communities, at a whopping 80% increase in single-family home values. Middletown and Portsmouth also have an abundance of vacant land, which is attracting owners who want newly constructed homes, which in the past few years have soared in costs due to the Covid 19 induced supply chain issues which have driven construction prices through the roof.

It is not untypical for the average high quality architecturally designed home to cost somewhere around $350 per-square-foot for the construction costs alone, not including land, septic system or well if required.

Tiverton and Warren have the least expensive real estate values in the East Bay, if you can consider more than $400,000 “least expensive”! Both were in the upper $200,000 range five years ago, and now both showed single-family median prices above $400,000. Yikes!

With these kinds of numbers, it’s no wonder Rhode Island has a housing affordability problem and growing homeless population.

Bristol continues to attract a large and growing number of Barrington residents whose children have moved out of the nest to college and therefore no longer require the excellent school system that Barrington offers. They are drawn to the historic downtown charm and Bristol Harbor amenities of very good restaurant offerings. Single-family homes in Bristol increased 67%, to a median of $500,000 in 2022.

There was a house sale in Bristol in 2022 that set the local Bristol real estate community a buzz. A property on Everett Street, which is located at the bottom of the Fatima Drive neighborhood and sits along the Kickemuit River, sold for a whopping $1,675,000 after only two days on the market. It has 2,200 square feet, four bedrooms, three bathrooms, and a dock. It has no garages and sits on a 6,000-square-foot lot.

As they say, they don’t make any more waterfront land, and waterfront property values have increased exponentially in the past few years.

Barrington single-family prices are the highest in Bristol County but are showing some signs of high tax rate fatigue. Values increased “only” 43% over the five-year period. The slower demand may also reflect the growing “work from home” trend created by Covid-19.

Another interesting phenomenon in Barrington is there is finally a condominium market. Until recently only a couple of condominiums existed in Barrington. There are also a couple of PUD developments, but both of these have similar values as most of Barrington, whereas many condo developments in the East Bay and State of Rhode Island offer lower pricing for residents.

What changed more recently, starting in 2010 and a new phase in 2020, is the Bay Spring Crossing Condo Complex located off of Washington Street near Haines Park. Fourteen of these single-level units sold in 2022, ranging in price from $247,000 to $400,000, with a median price of $365,000, which is 87% lower than the Barrington single-family median of $680,000. Barrington needs more of these types of housing options for residents.

So, what’s in store for real estate values in 2023 in the East Bay? As a real estate appraiser and consultant, I get asked that by a lot by people, like I have some kind of crystal ball into the next war, flu epidemic, disruptive technology, or direct line to the Federal Reserve. My answer is, “who knows?”

The real estate market is far more complex and subject to local, regional, national, and international monetary, governmental, and business forces for me to have a clue.

I do know that the Federal Reserve’s strategy of increasing interest rates to dampen inflation is impacting mortgage rates, which have basically more than doubled since March of 2022. The increased rates have stopped the overzealous buyers from bidding above asking price, which became the norm in 2021 and early 2022.

The number of days on the market is increasing now, but we are still not near to a balanced market where there is an equal number of buyers and sellers.

There is a lot of money out there from people who were able to take advantage of the stock market in the past few years and are paying cash to buy a home. There is also a growing trend of investors who are buying single-family homes for investment purposes and not for home ownership.

There is also a new phenomenon in the real estate market, which typically is always over or under supplied, but seldom in balance. The number of buyers and demand for housing is still unrelenting, due to pent-up demand from years of under-purchasing of real estate. Until that abates, real estate values will continue to increase, albeit at a slower rate.

So, if I were a betting man, which I typically am not, I would bet East Bay real estate values will continue to increase, albeit at a more moderate level. That also means that affordable housing and homeless housing policies will require more and more government intervention so that regular folks don’t get priced out of the market and have nowhere to raise their families.

Lastly, and this is a personal political message to the powers to be, until the government can figure out how to balance those haves with the have-nots, the American dream of homeownership will unfortunately be no more — that will be a problem for the haves in the short and long run! 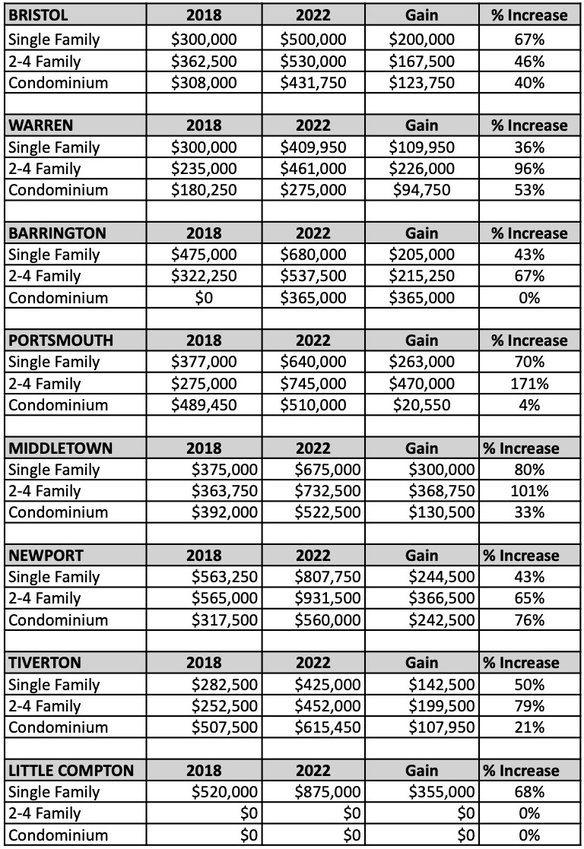 Shown above are the changes in median sales prices from 2018 to 2022 in each community and each category of housing. The greatest percentage increase was in Middletown single-family homes, which increased 80%. Also of note, Little Compton surpassed Newport for the highest single-family home prices in the region (as measured by median sales prices). Single-family home prices increased 50% or more in most communities, including Middletown, Portsmouth, Bristol, Little Compton and Tiverton. The small amount of data, such as for the Portsmouth and Middletown 2-4 family category, may skew percentages larger or smaller than would be seen if more data was available.

Douglas Gablinske owns AppraiseRI, a 25-year-old statewide real estate appraisal company located in Bristol, R.I. He lives with his wife, Dr. Patricia Gablinske, in the Touisset neighborhood. He is also the chairman of the Warren Taxpayer Appeal Board.