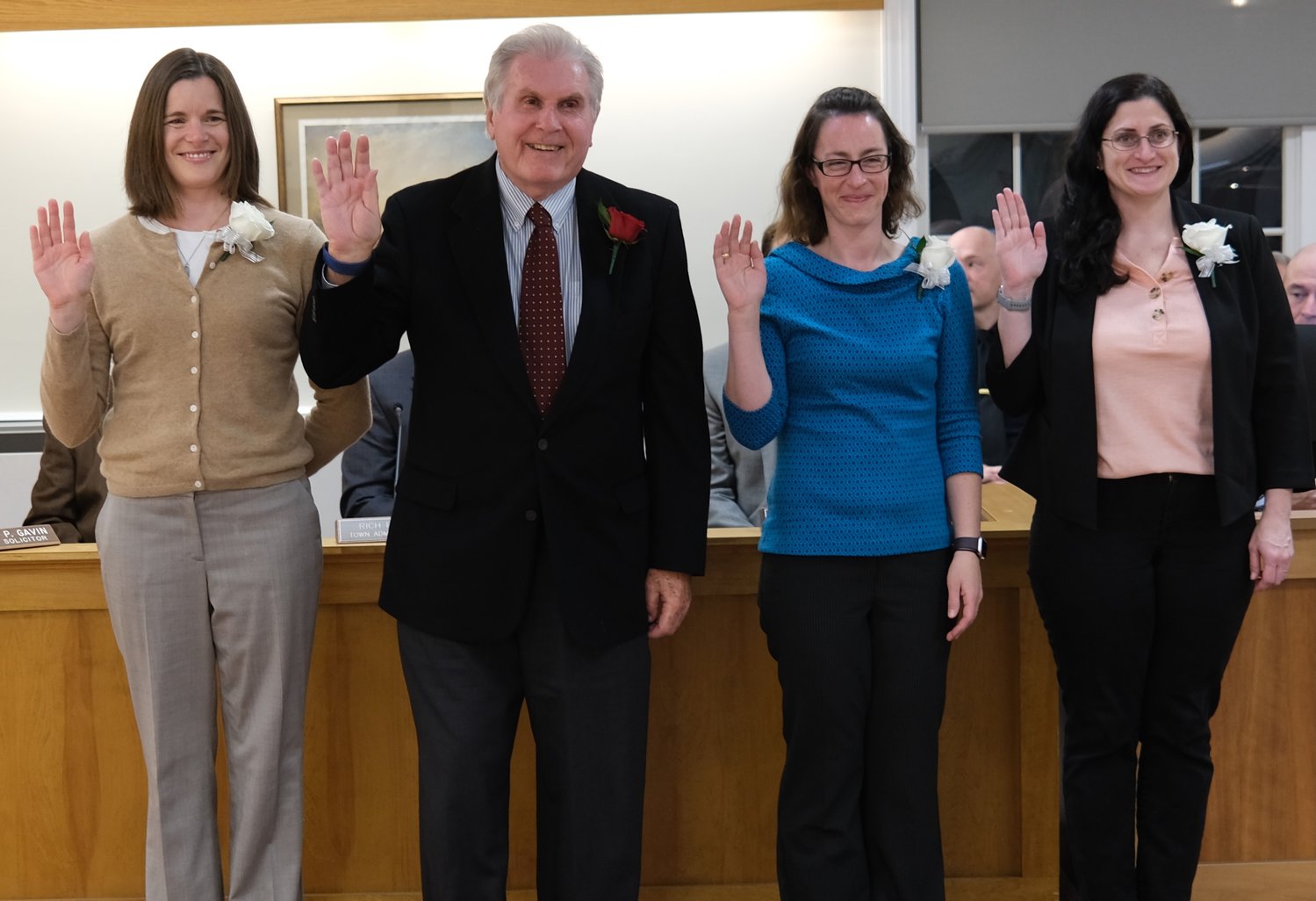 Emily Skeehan, Fred Faerber III, Isabelle Kelly, and Sondra Blank (from left) are sworn in as members of the Portsmouth School Committee by Gov. Daniel McKee during a ceremony at Town Hall Monday night.
JIM MCGAW 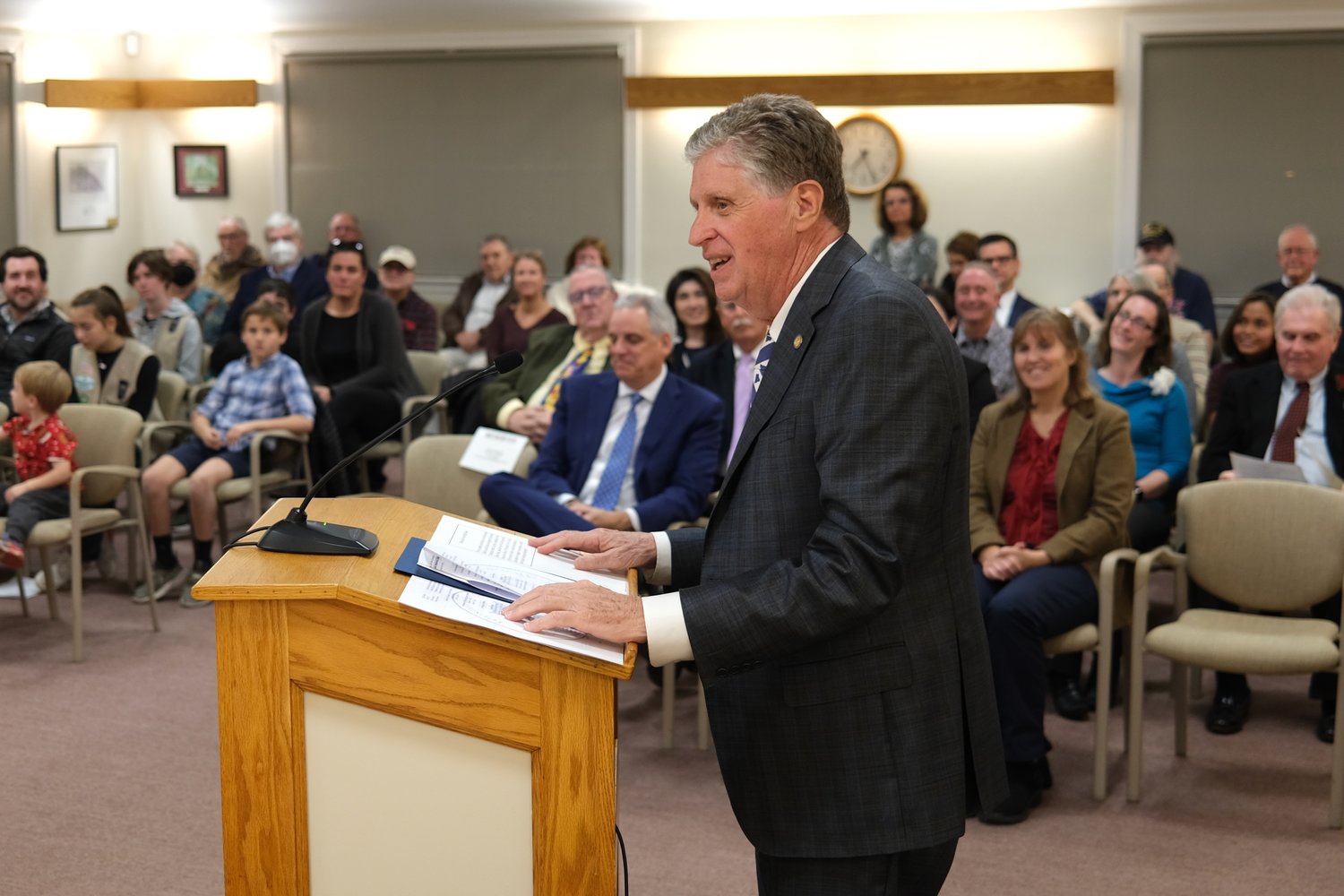 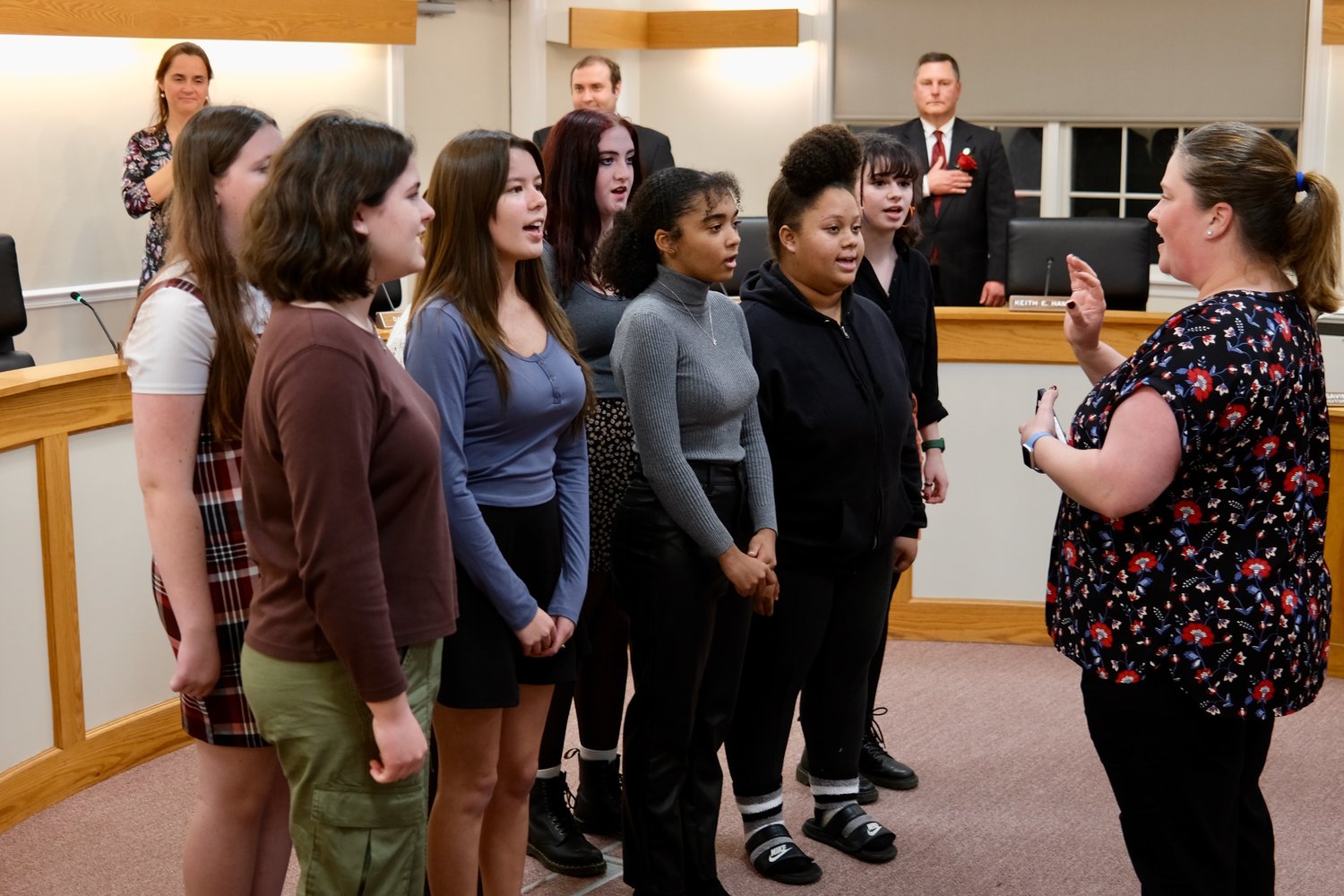 Members of the Portsmouth High School Vocal Ensemble, led by Shawna Gleason, sing The National Anthem at the start of the program. Behind them are Town Council members Daniela Abbott, Andrew Kelly (outgoing) and Keith Hamilton.
JIM MCGAW 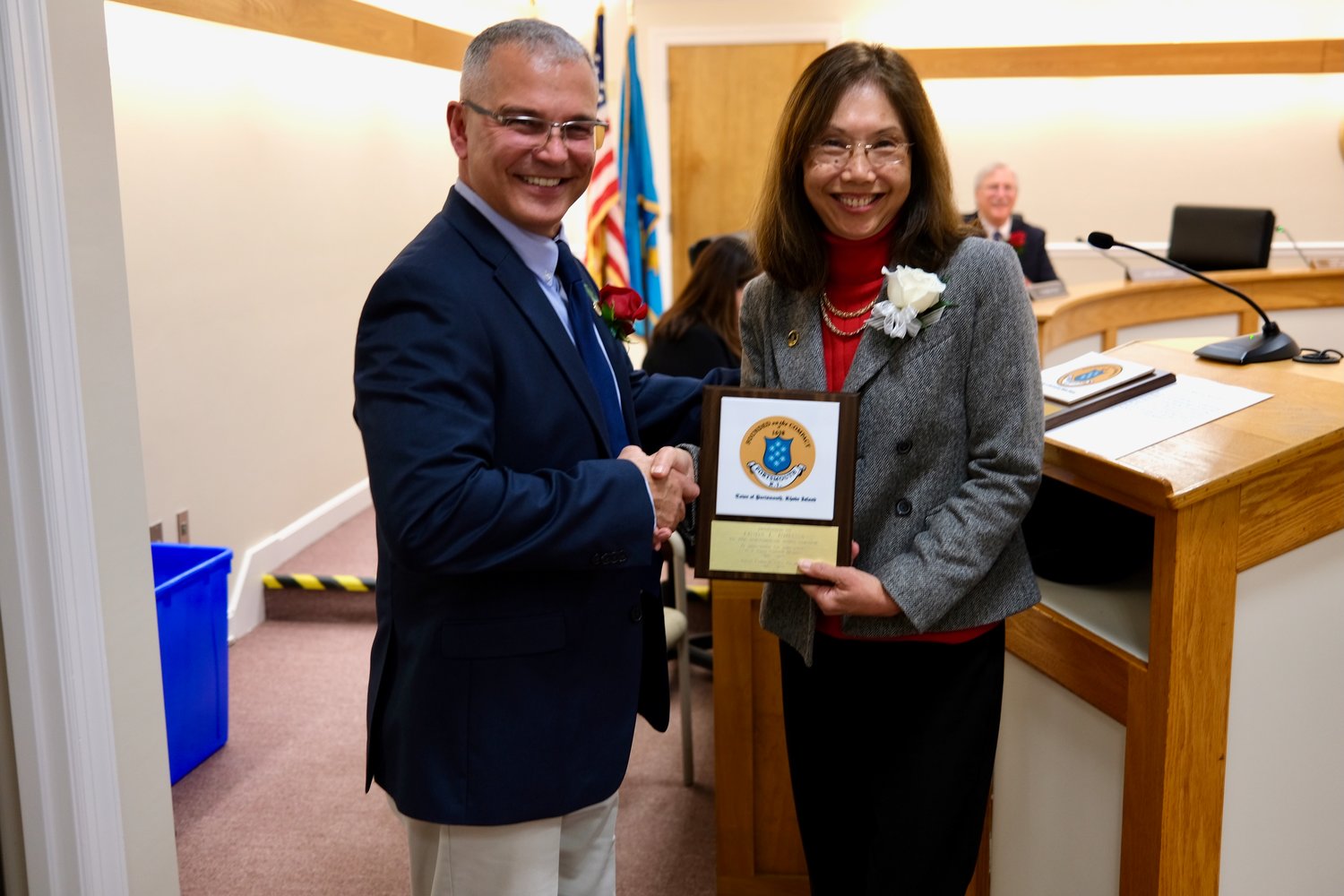 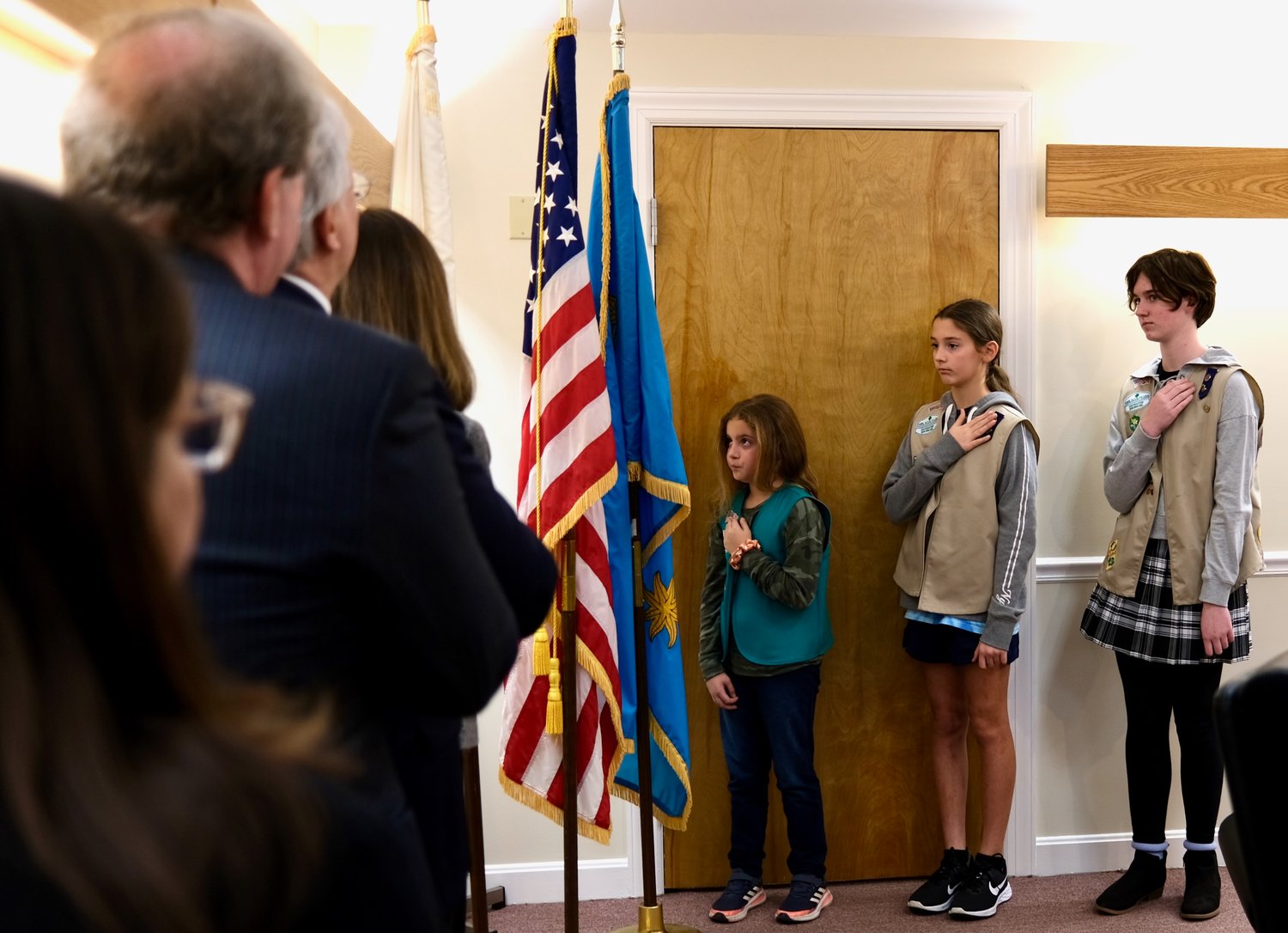 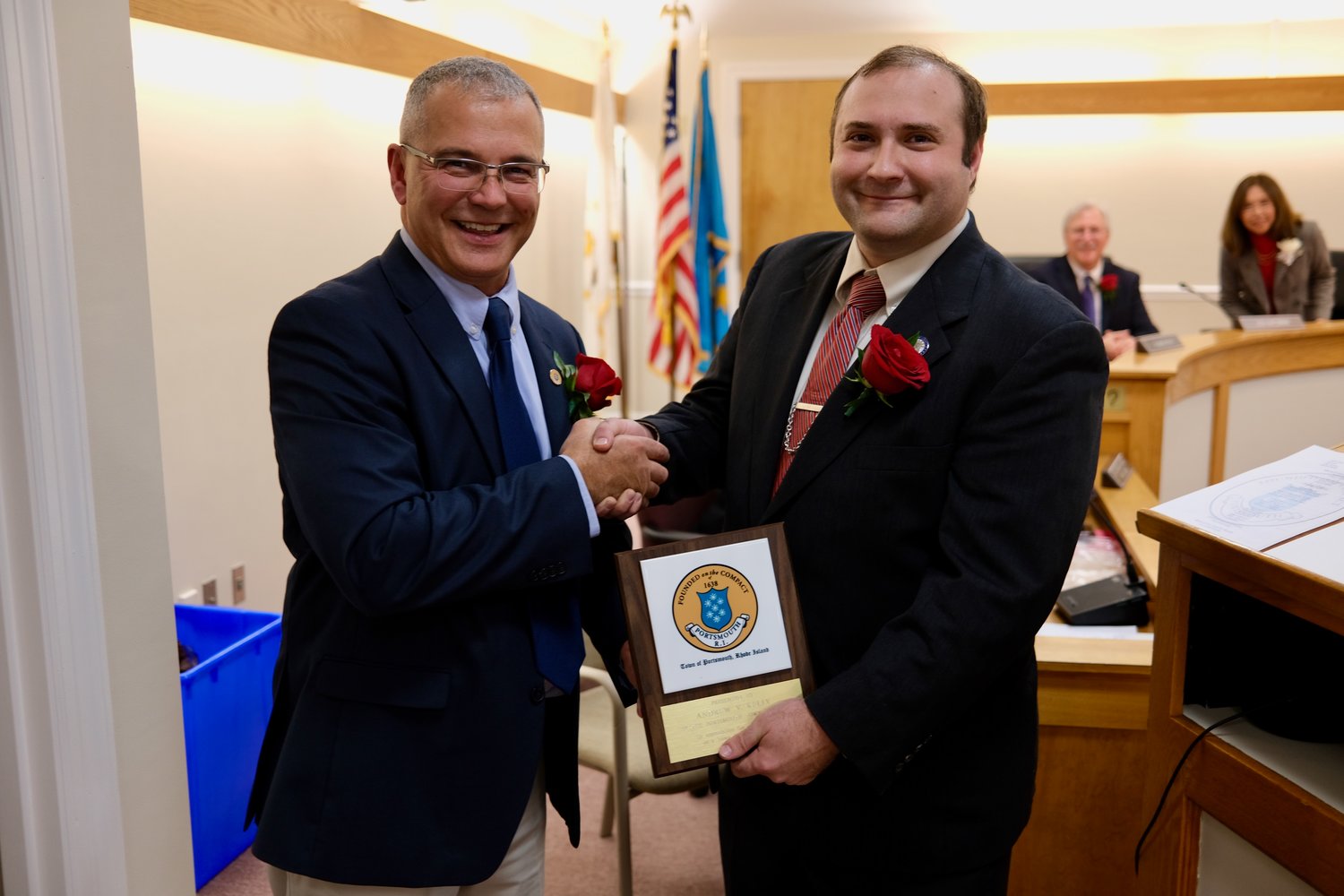 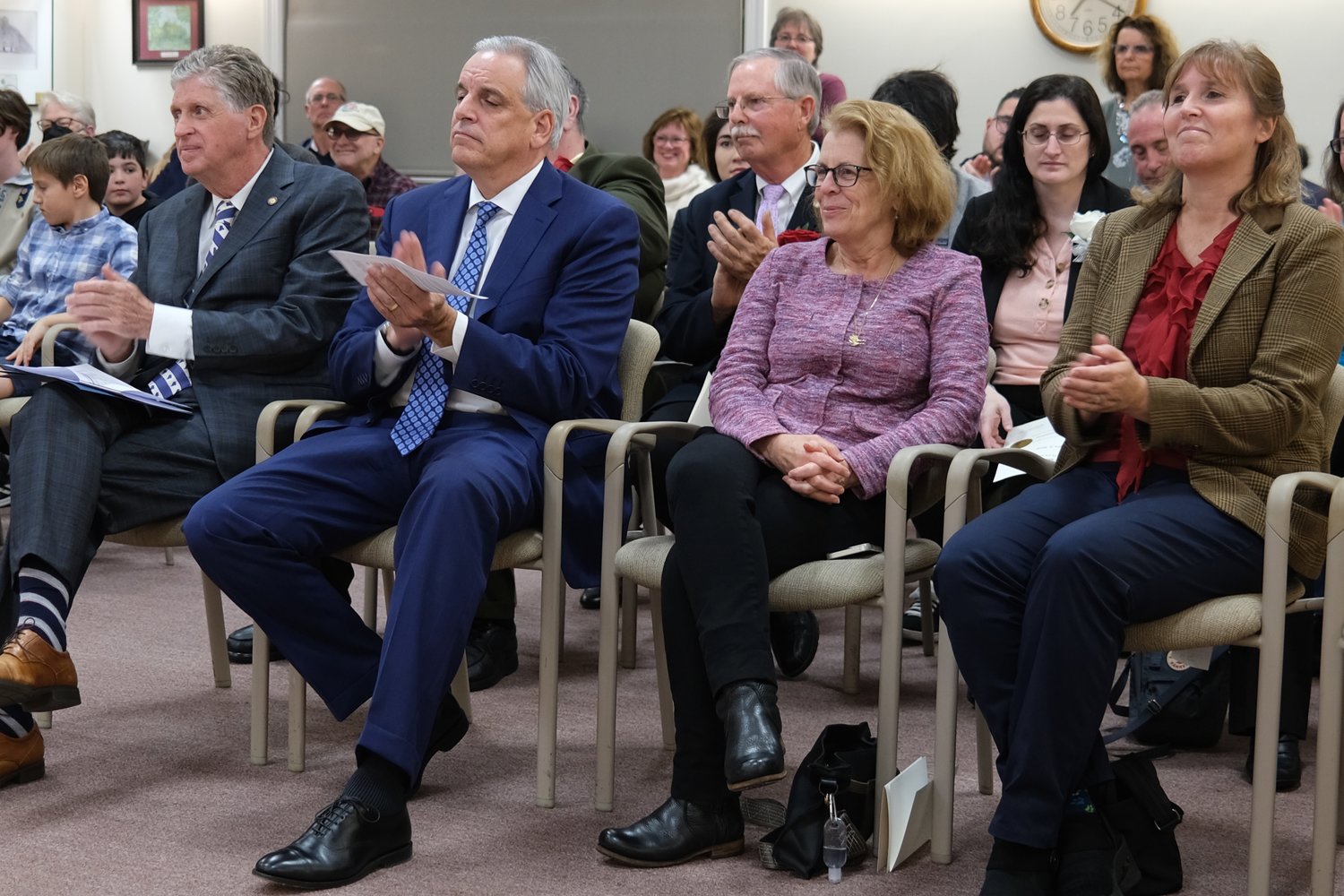 Gov. Daniel McKee, R.I. Attorney General Peter Neronha, Rep. Terri Cortvriend, and Rep. Michelle McGaw (from left) listen to the ceremony from the front row. Between Neronha and Cortvriend in the second row is David Gleason, who won a seat on the Town Council and was waiting to be sworn in by the governor.
JIM MCGAW 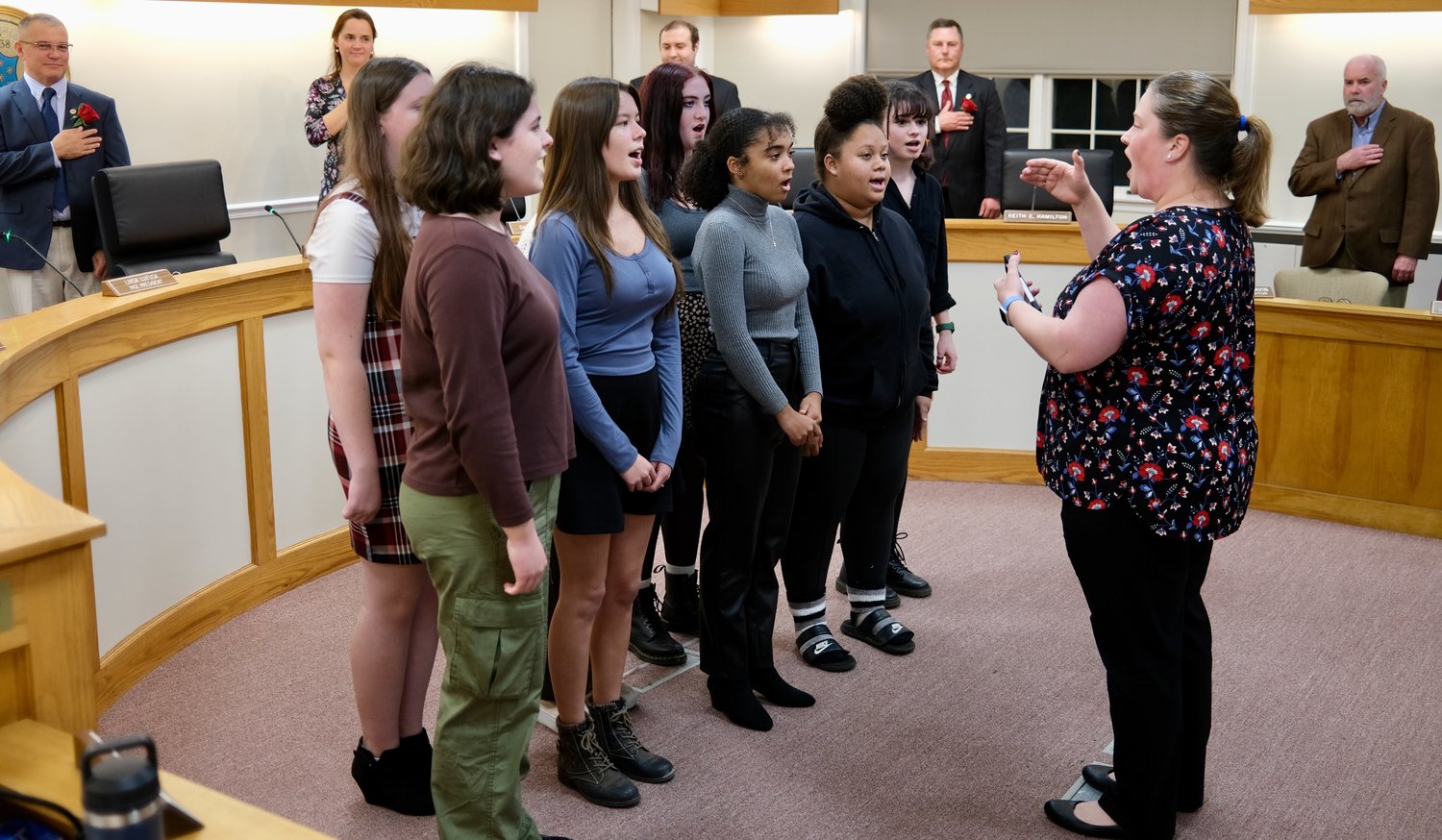 Members of the Portsmouth High School Vocal Ensemble, led by Shawna Gleason, sing The National Anthem at the start of the program.
JIM MCGAW
Previous Next
Posted Monday, November 28, 2022 9:44 pm
By Jim McGaw

PORTSMOUTH — Kevin Aguiar was voted in as president of the Town Council for another two years following a swearing-in ceremony Monday in which members of the council and School Committee took the oath of office from Gov. Daniel McKee.

In the only official business of the 36-minute meeting at Town Hall, Aguiar was nominated for president by fellow member Daniela Abbott, and there were no further nominations.

After council members took their seats, Aguiar then called for nominations for council vice president. Newly elected council member Charles Levesque — a past council member who also served in the General Assembly — nominated Leonard Katzman, who had won another term on the council.

The majority of “ayes” went Katzman’s way, however.

Before the swearing-in ceremony, the two outgoing council members — Linda Ujifusa and Andrew Kelly — offered some brief remarks before being presented with town tiles by Aguiar.

Ujifusa, who was elected earlier this month to the R.I. Senate District 11 seat, said she was grateful “to have served with women and men who have made this town their priority … and worked so hard to make Portsmouth a great place to work, live and play.”

Ujifusa said “Portsmouth is blessed” to have Town Administrator Richard Rainer Jr.’s leadership and integrity in guiding the town. She said she’ll continue to communicate and work with town and school officials in her new role as state senator, and thanked family, friends and community members who supported her candidacy for both the council and senate.

Ujifusa said she was particularly grateful to her husband, re-elected council member J. Mark Ryan, “who works harder than anyone I know to make the world a better place.”

Kelly, who ran for the Senate District 11 seat but withdrew his candidacy before the election, said it was “an honor and a privilege” to serve on both the council and the School Committee, of which he was also a member.

He thanked council members, the town’s administrative team, members of the Department of Public Works (“unsung heroes,” he called them), family members and others.

He plans on staying actively involved in town matters by serving on volunteer committees. “I have always been engaged in this community and I plan to stay that way,” Kelly said.

Before swearing in the seven members of the Town Council, McKee did the same for four School Committee members, none of whom were contested during the election. They were Sondra Blank, Frederick Faerber III, Isabelle Kelly, and Emily Skeehan.

The other members of the committee are Emily Copeland (chair), Karen McDaid, and Juan Carlos Payero. (School Committee terms are staggered, so all seven seats are not up for election in the same year.)

In his opening remarks, McKee reminded everyone that he was formerly a mayor in Cumberland, and said he looked forward to working with local boards and committees during his next four years as governor.

“I really know how important leadership is at the local level,” he said, adding it’s vital in making the state “a great place to live.”