In Portsmouth: East Main suddenly on fast track for resurfacing

PORTSMOUTH — Well, here’s some good news to start off 2022: The long-awaited resurfacing of beat-up East Main Road may start much sooner than anyone had expected.

In Portsmouth: East Main suddenly on fast track for resurfacing 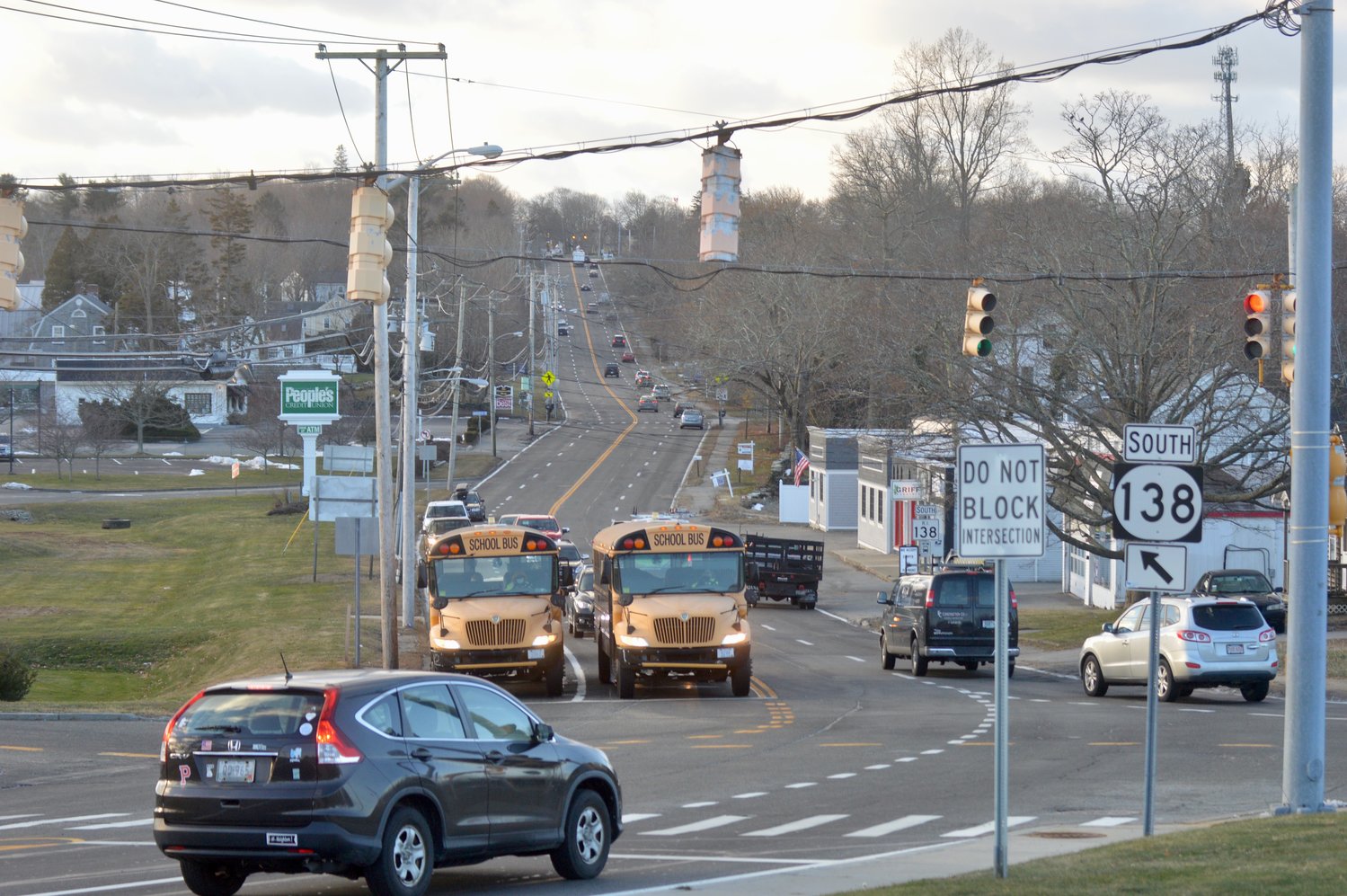 The East Main Road improvements would include one roundabout installed at the Turnpike Avenue intersection in front of Clements’ Marketplace.
Jim McGaw
Posted Wednesday, January 12, 2022 10:10 am
By Jim McGaw

PORTSMOUTH — Well, here’s some good news to start off 2022: The long-awaited resurfacing of beat-up East Main Road may start much sooner than anyone had expected.

The town received word last month that the R.I. Department of Transportation (RIDOT) is considering fast-tracking the resurfacing job by combining a number of East Main Road paving projects together, rather than spreading them out over a number of years.

“This would bundle the projects together and begin planning them this year,” Town Administrator Richard Rainer, Jr. told the Town Council Monday night.

The news comes only six months after the town was informed that several long-awaited and high-priority road improvement projects in Portsmouth had been placed on the back burner in the latest draft State Transportation Improvement Program (STIP), a list of transportation projects the state intends to implement from 2022 to 2031 using U.S. Department of Transportation funds.

In June 2021, the town learned that under the STIP, RIDOT’s planned $7.5 million resurfacing of East Main Road, from Hedly Street to the Middletown line, would be delayed by one year, with construction scheduled for 2023-2024.

In addition, the $15 million Town Center project, which entails resurfacing the roadway, safety improvements, limited sidewalk replacement and extension, and handicap ramp installation on East Main Road from Hedly Street to Turnpike Avenue, was pushed out four years. The project re-design, the town learned, wouldn’t begin until 2023, with construction taking place in 2025-2026, according to the STIP. Other road improvement projects were delayed as well.

However, in a Dec. 15 letter to Mr. Rainer and Town Planner Gary Crosby, Pamela Cotter, RIDOT’s acting administrator of planning, said the department is considering merging the projects due to “the influx of new federal funding through the Infrastructure Investment and Jobs Act (IIJA),” which was signed into law by President Joe Biden on Nov. 15, 2021.

The IIJA is projected to send roughly $2.5 billion to Rhode Island over five years, including $1.5 billion for federal-aid highway apportioned programs. Another $242 would be used for bridge replacement, and $272 million for improvements to public transportation. Other major investments include $378 million for water infrastructure improvements and $100 million for broadband coverage.

On Monday, Rainer requested council permission to write a letter to RIDOT expressing the town’s agreement with the new plan to bundle several jobs, which would require a “re-scoping” of the Town Center project.

Identified as project 1379 in the STIP, the Town Center project was originally conceived in 2003, when the town completed a study for the preliminary land use, design and traffic plan in support of a district that would be vehicle and pedestrian friendly, and create better economic opportunities for local businesses. Originally, multiple roundabouts were envisioned for the project, but under RIDOT’s new plan there would be only one: at the Turnpike Avenue intersection in front of Clements’ Marketplace.

Since there is great competition for advancing STIP projects, RIDOT can “accelerate only the ones in which we have come to an agreement,” Cotter stated in her letter, explaining why the department needed a letter indicating the town’s concurrence.

The council voted 6-0 to direct Rainer to send the agreement letter. Council President Kevin Aguiar recused himself because the company for which he works could potentially be involved in some of the work.

The motion for the vote incorporated remarks made by council members Keith Hamilton and Daniela Abbott. Hamilton noted that improvements to intersections at McCorrie Lane, Sandy Point Avenue and Stub Toe Lane appeared to be missing from RIDOT’s letter.

Abbott, meanwhile, said any design changes for East Main Road should plan for the future by incorporating shared-use lanes. RIDOT’s letter stated the shared-use path included in the re-scoping package will be scheduled after the paving work while the department works out “funding and alignments.”

In any event, council members expressed their pleasure at the welcome news that the town’s main east-side artery may finally be getting some attention from the state.