PORTSMOUTH — Less than a week after recreational cannabis sales began at Portsmouth’s Greenleaf Compassionate Care Center along with four other dispensaries around the state, local … 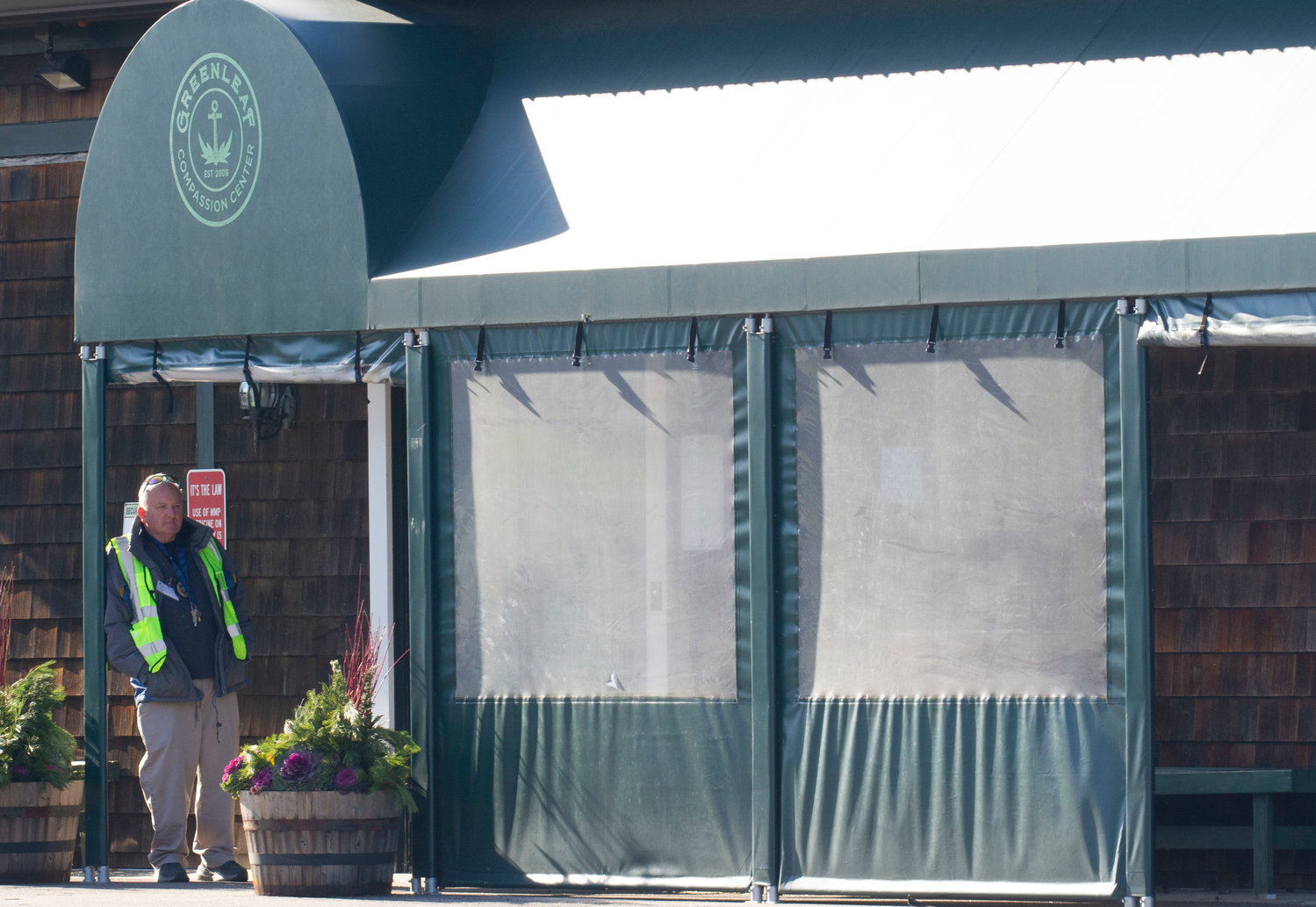 A security guard waiting to assist customers hangs outside the entrance to Greenleaf Compassionate Care Center on the first day of recreational cannabis sales on Thursday, Dec. 1.
RICHARD W. DIONNE, JR.
Posted Wednesday, December 7, 2022 10:09 am
How the cannabis tax is broken down

In Rhode Island, there’s a 20-percent tax on recreational cannabis, which is broken down as follows:

Massachusetts’ regulations on cannabis taxes are similar, except a local excise tax of up to 3 percent is an option:

• Option of up to 3 percent local excise tax is permitted

PORTSMOUTH — Less than a week after recreational cannabis sales began at Portsmouth’s Greenleaf Compassionate Care Center along with four other dispensaries around the state, local officials are waiting to see how much revenue the 3-percent local excise tax on retail sales will bring to the town’s coffers.

Recreational marijuana, which in Rhode Island is being taxed at 20 percent overall, has been touted as a boost to the state’s economy by Gov. Daniel McKee and others.

However, Town Administrator Richard Rainer, Jr., who is starting the process of putting together the town’s 2023-24 municipal budget, isn’t expecting any revenue jackpot for Portsmouth.

“There are expectations by some that this will be a windfall. We don’t see it. We think it will be marginal,” Rainer said on Tuesday, five days after Greenleaf, located on West Main Road just north of Melville School, became a “hybrid” dispensary — selling both medicinal and recreational cannabis products.

Greenleaf, he noted, will have competition from not only the other four dispensaries in Rhode Island that sell recreational cannabis, but also the already established dispensaries in Massachusetts, including one just over the border in Fall River.

“I don’t think there will be a big incentive for people to drive to Aquidneck Island for marijuana,” he said, guessing that most of the recreational customer base would have to be from the island.

Police have been monitoring the site and find “no significant rise in traffic. Empirically, that tells me there isn’t a big leap in demand,” he said.

Rainer prefaced his remarks, however, by saying “I’m no expert on marijuana.”

The administrator said at some point, he’ll need to plug an estimate on revenue based on the 3-percent local excise tax into the municipal budget.

“We haven’t gotten that far, yet,” he said. “I don’t know how else to do it except to talk to the owner to get an estimate on sales. They just started Dec. 1.”

There are no restrictions on how the town can use the money. “That goes into the general fund. It will just be tax revenue,” Rainer said.

Meanwhile, things have gotten off to a smooth start at Greenleaf after recreational sales began last Thursday, Dec. 1 — the first day permitted under the new state law.

Police Chief Brian Peters said Greenleaf hired a detail officer to monitor the business on the first day, mainly to ensure smoother traffic flow. The chief said there were no problems to report after the first few days of recreational sales.

“We have not had any issues at Greenleaf with the new changes,” he said. “The detail officer on the opening day last Thursday was sent home early due to no crowds or traffic issues. Things have been running smoothly thus far.”

Police will keep monitoring the site, however, especially to make sure there’s enough parking and that customers’ vehicles “aren’t going into the neighborhoods, and that they can get out OK onto West Main Road. It’s tough with the traffic there.”

Greenleaf also owns the adjacent property, formerly home to the Smaller State Smoke Shop, and customers are welcome to use that parking lot as well.

Customers came and went at a fairly brisk pace at Greenleaf on a rainy Saturday afternoon. At some points there were just a couple of people waiting in line, while that number quickly grew to 14 within a matter of minutes. The building has several cash registers, and the interior is divided for recreational and medicinal sales. (People with a medical marijuana card are given first preference in entering the building.)

The first thing you do upon entering the building is check in with a security officer, who will view your ID. (Recreational cannabis sales are limited to people age 21 and older.)

Then you get in line for a register, where you tell a “budtender” what you’re looking for. Among the products are edibles, vaporizers, topicals, accessories and more.

“You have the displays right there to the right, with different color codes which mean different things. During your experience, if you want to see or smell anything, you can,” said Newcomer.

The most popular product, he said, is always “flower” — the smokeable, trichome-enriched part of a cannabis plant. It’s also the most versatile of the products Greenleaf sells, as you can smoke it using a bong, a pipe or bowl, roll it into a joint to blunt, and cook with it as well.

Right behind that are “pre-rolls” (a ready-to-go joint) and vapes. Then there are the edibles such as gummies, chocolates, caramels, peanut butter cups, lozenges and more. (Business was brisk on Saturday, and the shop was out of gummies by the early afternoon.)

Customers pay by cash or debit card (no credit cards). “It’s pretty much a cashless ATM is what it’s called. You put your PIN in and it rounds up to the nearest five,” Newcomer said.

Greenleaf also uses CanPay, an electronic process that hooks up to your bank account. “It’s a secure way of paying without any credit card transaction,” he said.

The dispensary is open from 10 a.m. to 6 p.m. daily. Greenleaf has plans to offer home delivery for recreational customers, just as it does for its medical customers, but currently those wishing to purchase recreational cannabis must do so in person.