PORTSMOUTH — “A loving father, grandfather, friend and mentor” reads the inscription to a new red bench that was dedicated Sunday in memory of John “Bobby” G. Arruda, … 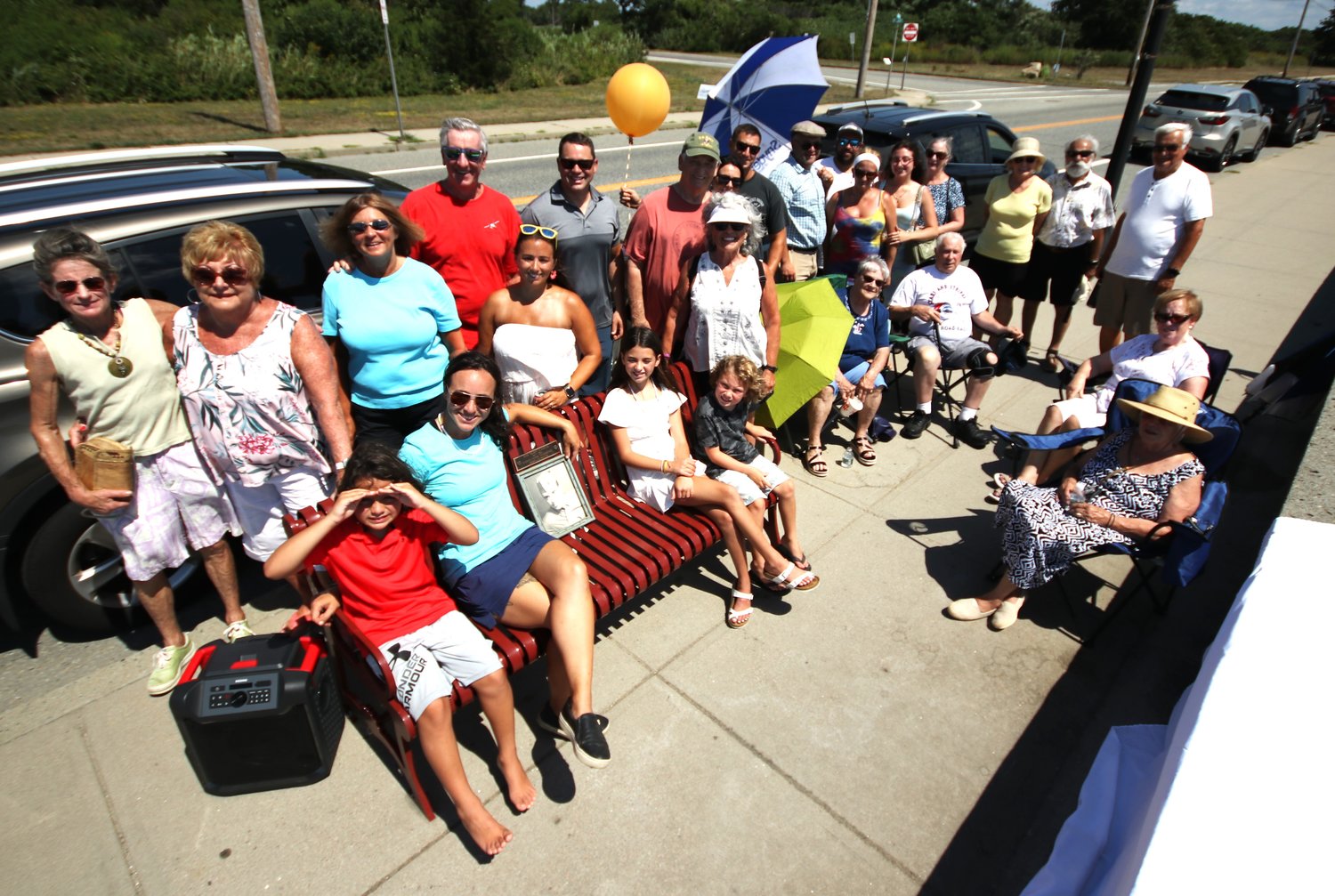 Family and friends of the late John “Bobby” G. Arruda gather along Park Avenue next to the bench that was dedicated in his memory on Sunday.
Posted Monday, August 8, 2022 5:17 pm 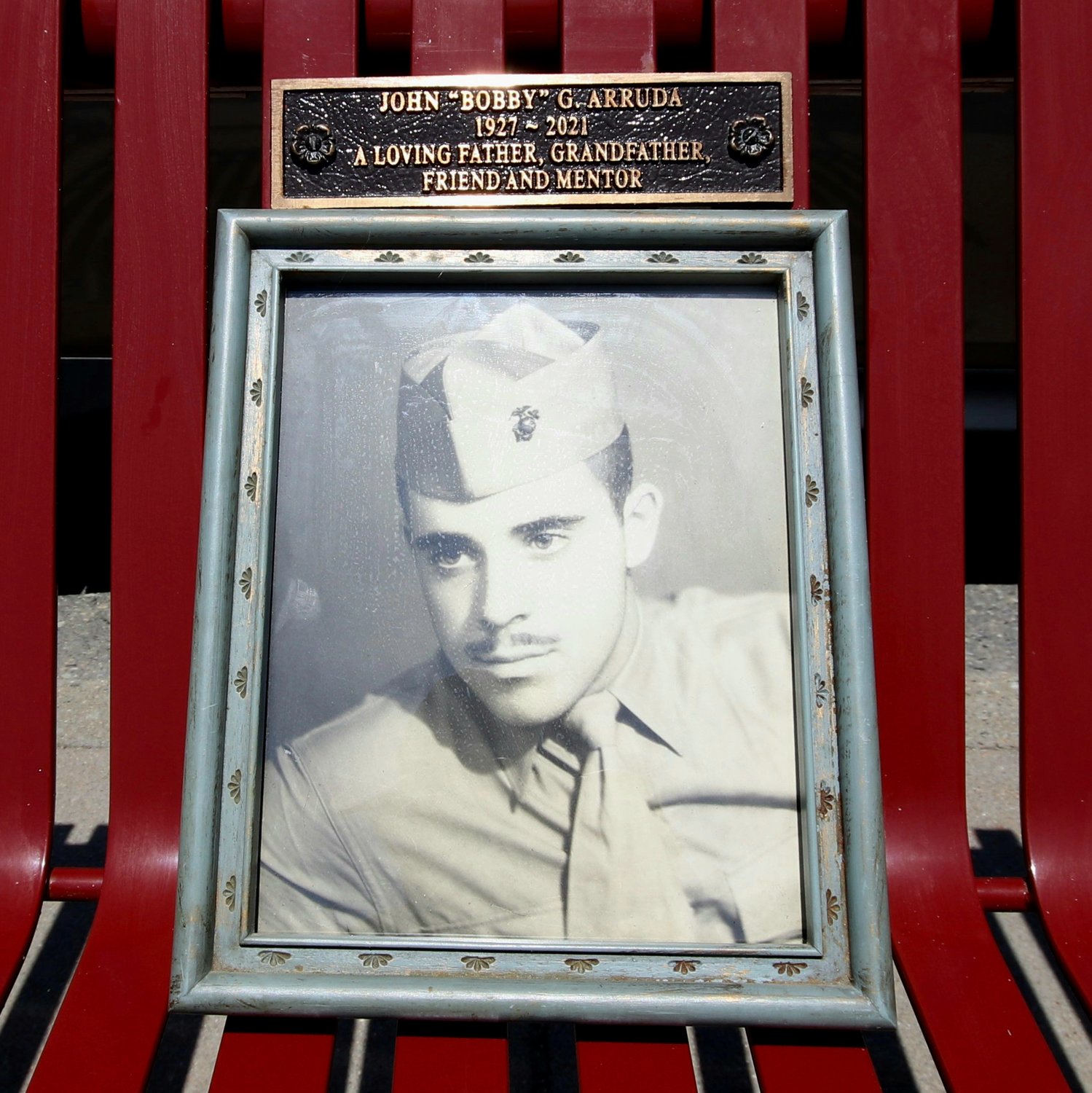 Arruda, a Portsmouth resident who was a Marine veteran of World War II, passed away in August 2021 at the age of 93.

PORTSMOUTH — “A loving father, grandfather, friend and mentor” reads the inscription to a new red bench that was dedicated Sunday in memory of John “Bobby” G. Arruda, who died last year at the age of 93.

Family members and friends gathered at Island Park Beach for the dedication ceremony in honor of Arruda, who was always fond of telling people they were lucky to live in such a beautiful area.

If you walk along Park Avenue and see the bench, you might wonder who Arruda was. Born in 1927, he was a Marine veteran of World War II, having been stationed in the Pacific, Guam, China and Japan.

Prior to his retirement in 1988, he was a nursing assistant at the Brockton VA Hospital for more than 27 years. He also worked at the Silva-Faria Funeral Homes as a funeral attendant for over 50 years, retiring in 2015.

He was also a fitness buff. Arruda was an avid handball player and a long-time member of the senior division at the Boy’s and Girl’s Club in Fall River. He also enjoyed running in multiple half marathons as well as one full marathon.

His son-in-law, Ed Nary (married to Nancy Arruda Nary), said Arruda was a spiritual man.

“He is religious in the way that most folks of Azorean descent are, but he is also spiritual in the way that he senses the spirits around him,” Nary stated in a short essay he wrote a few years before Arruda died, called “Pigeon Lands in Yard.”

One time, a pigeon landed in Arruda’s yard and made no attempt to move. So, he started talking to it. He called out the names of his two deceased wives, Olivia and Lillian. Then he called Nary, who lived next door.

“The bird, which had been released 200 miles away in New York in heavy fog, had a band on its leg that identified it as an American racing pigeon,” Nary wrote. “After a few hours of sleuthing, we got a call from its owner, a 90-year-old from Fall River, a few miles north. He had just gotten out of the VA hospital, he said. He couldn't come for the bird until his daughter got home, he said.”

When they arrived at the man’s house, he was waiting on the sidewalk. “The two men regarded each other in the respectful way that men of that generation do, and remembered a few common acquaintances,” Nary wrote. “We left after a few minutes for a prior engagement. My father-in law said I had done a good deed. That is just like him. I hope we get to have lunch. I hope there is time.”

Portsmouth: More than 120 turn out to ‘Walk the Battlefield’