PORTSMOUTH — At Gull Cove Tuesday morning, Wenley Ferguson, director of habitat restoration for Save The Bay, held up a large photograph that was taken by a volunteer and shared on the … 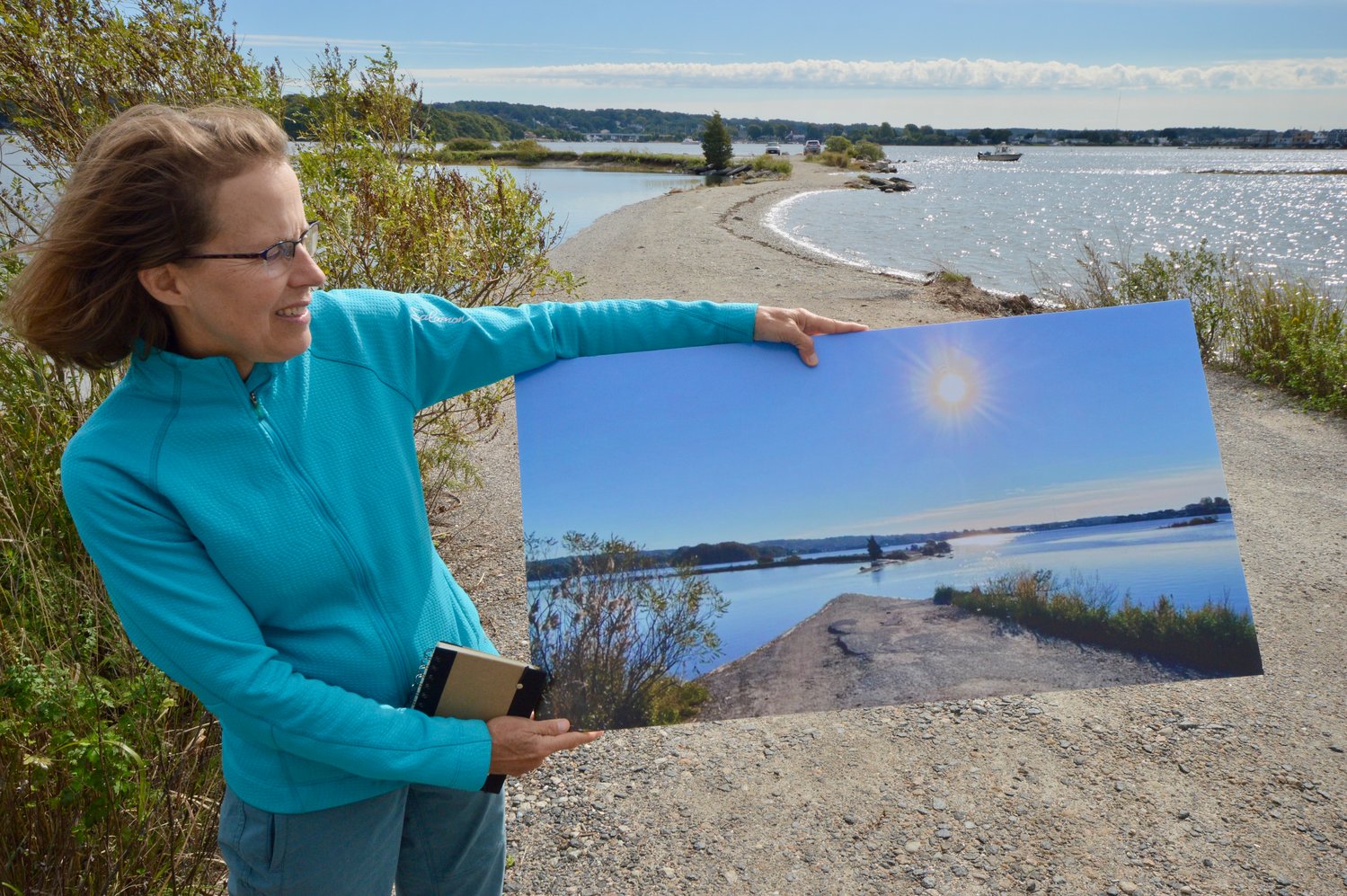 Save The Bay’s Wenley Ferguson holds a photograph, taken by a volunteer and shared on the MyCoast app, showing the access road (right behind her) to the former boat ramp at Gull Cove completely underwater during a king tide last year. “It shows how vulnerable this area is,” Ferguson said.
JIM MCGAW 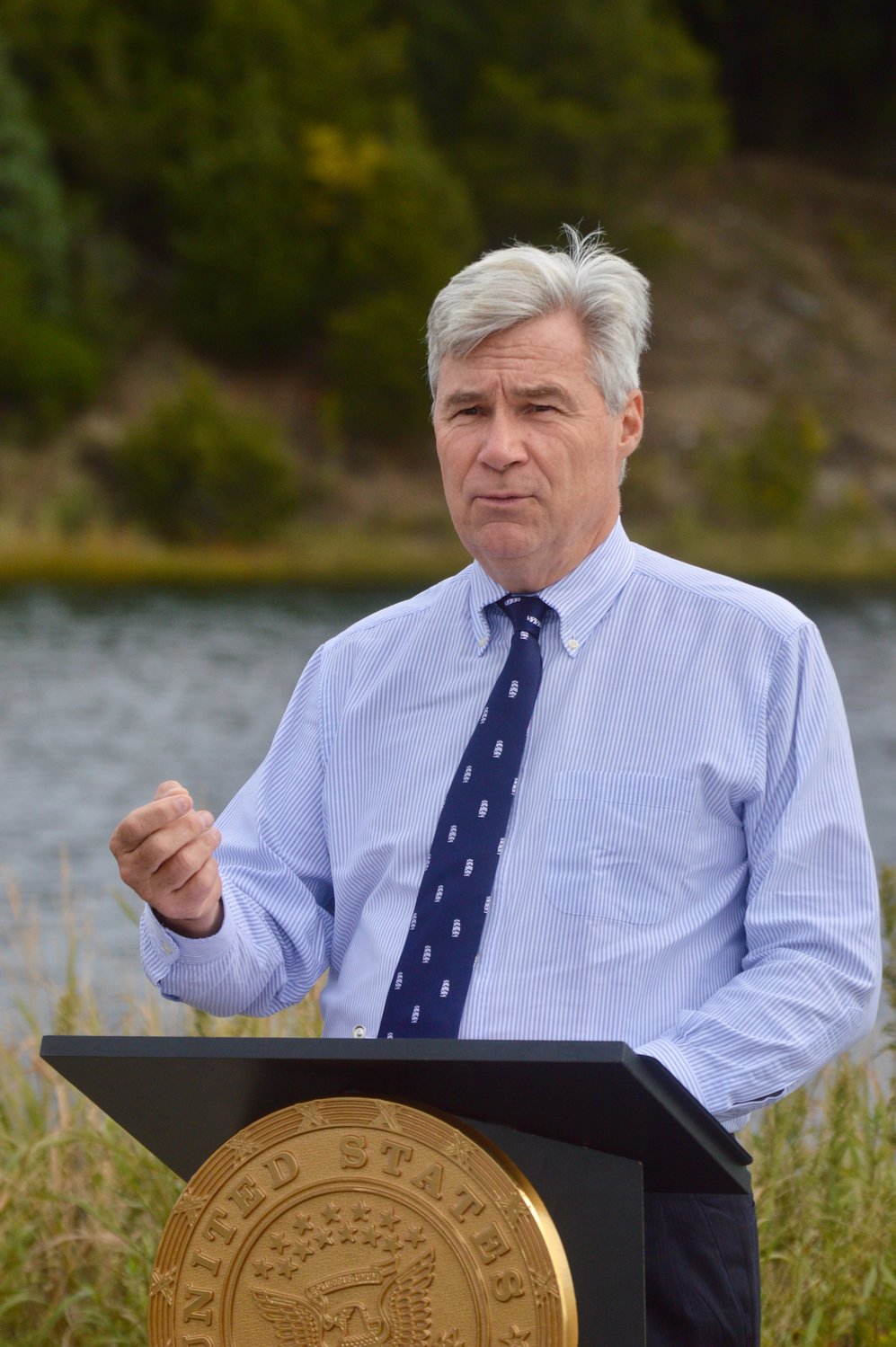 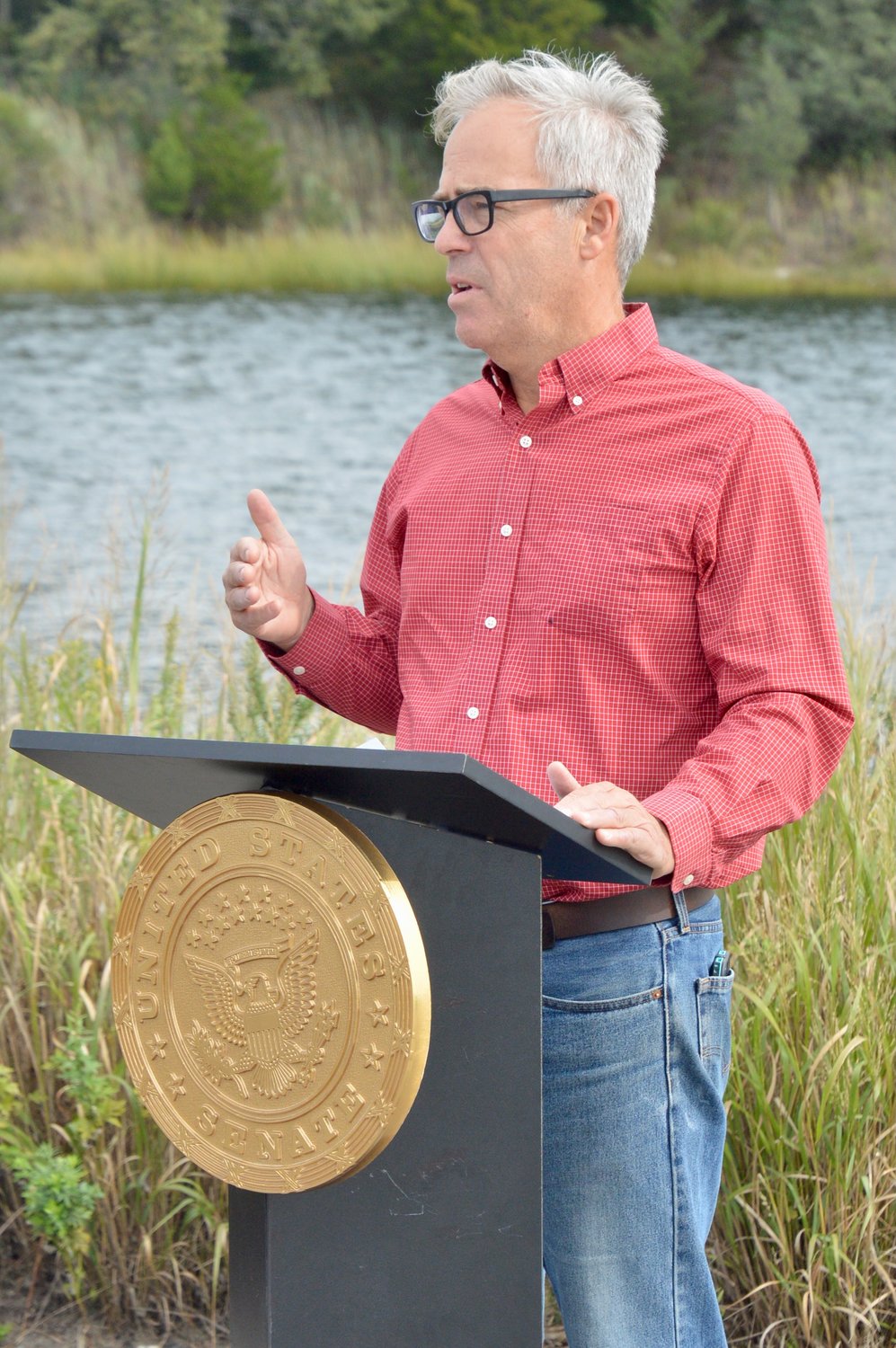 “Resilience projects, like the one taking place at Gull Cove, are critical to ensuring that our local habitats and ecosystems can remain healthy throughout these changes,” said Jonathan Stone, Save The Bay’s executive director.
JIM MCGAW 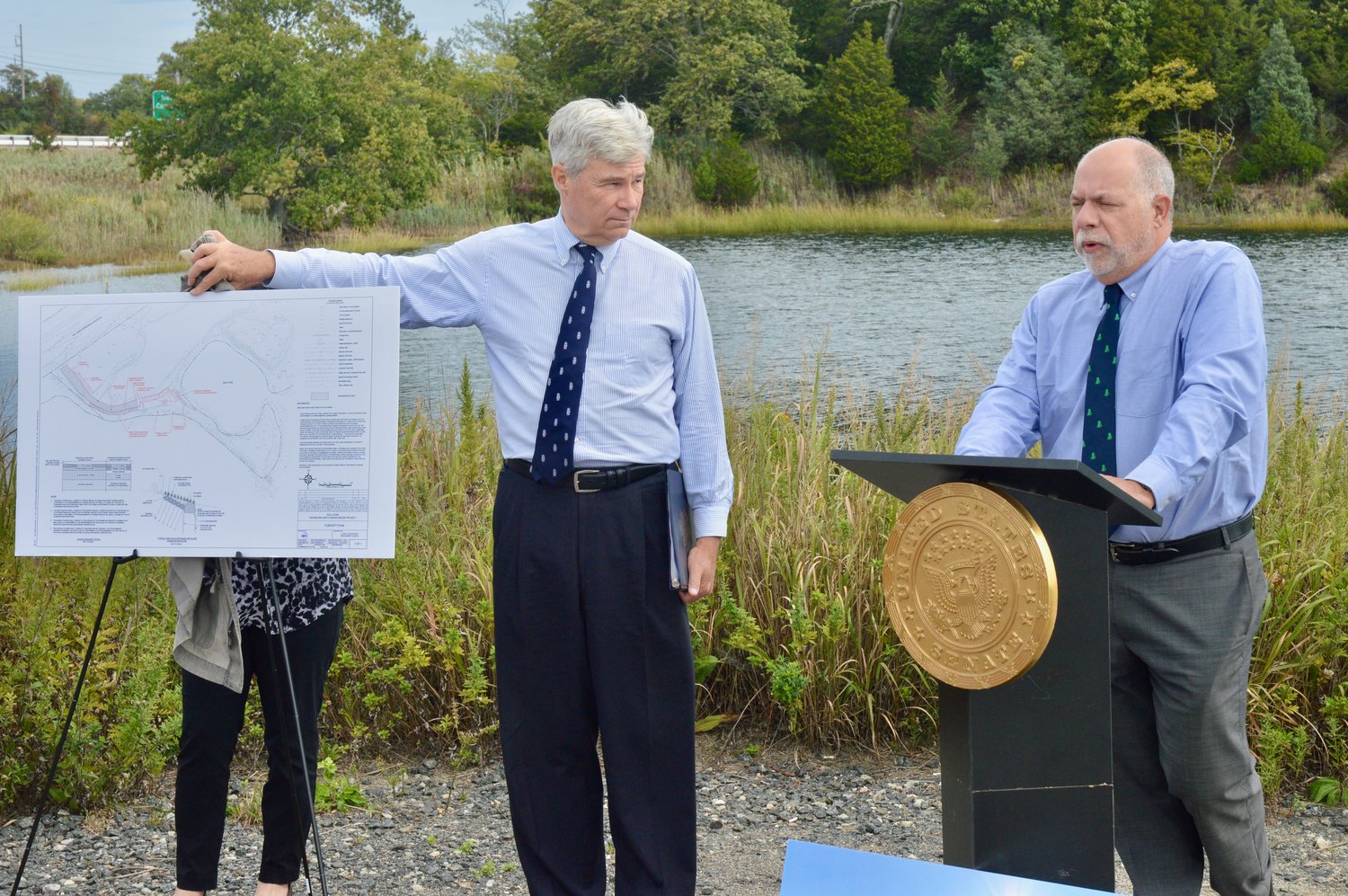 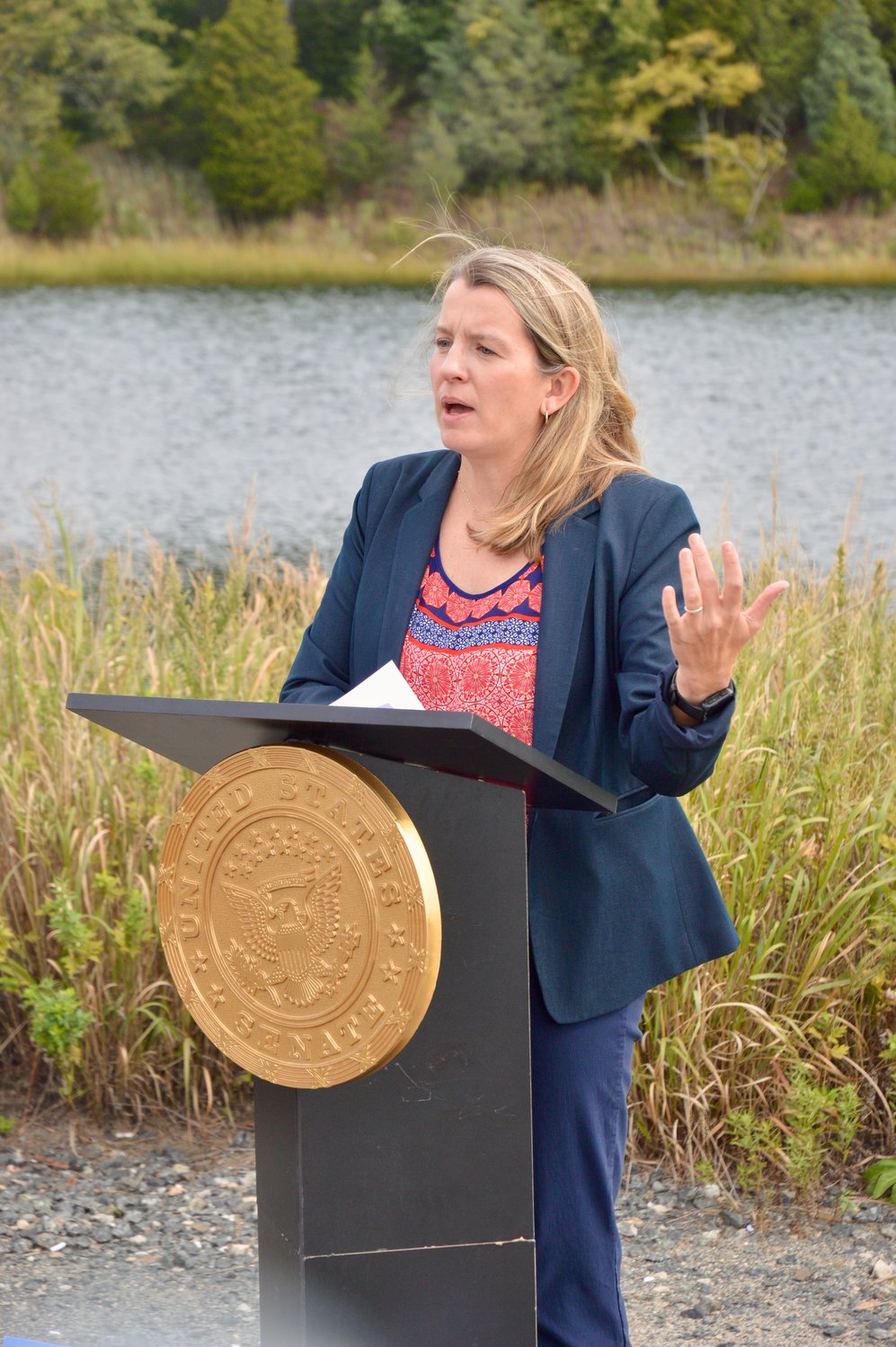 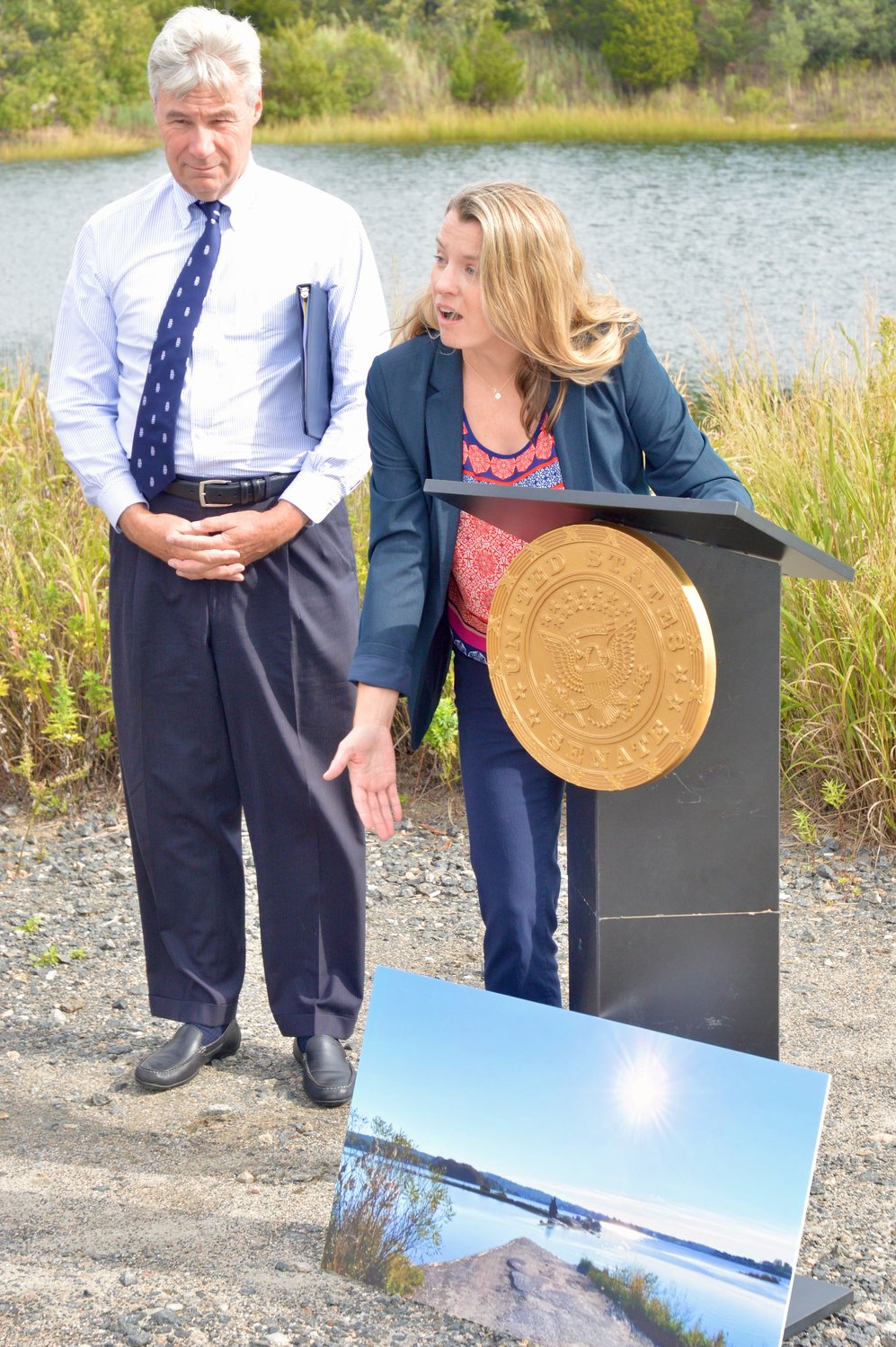 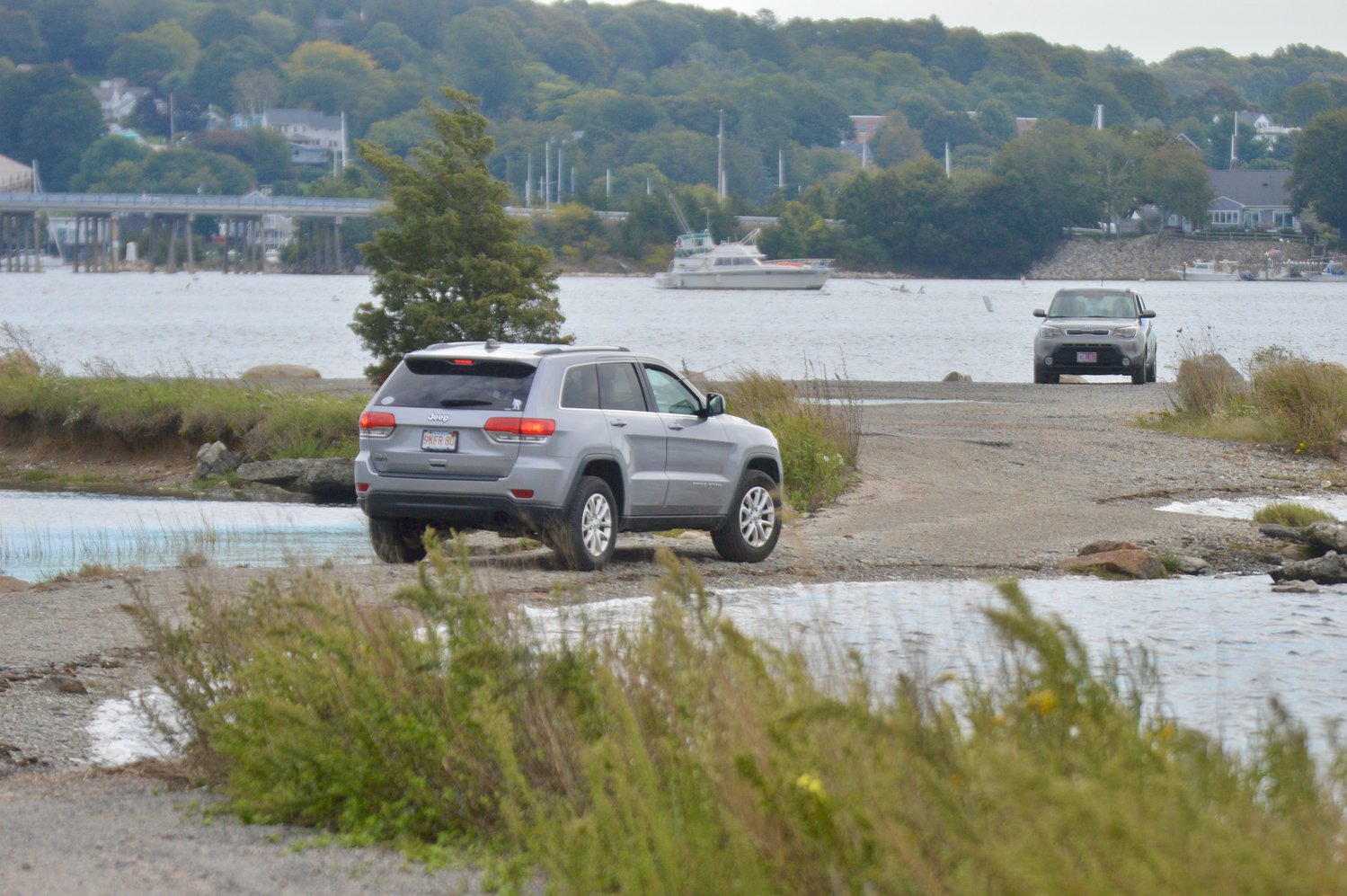 The whole idea is to enhance public access and public safety, just limit vehicle use.”
Wenley Ferguson, director of habitat restoration for Save The Bay
Gull Cove
View larger map
By Jim McGaw

PORTSMOUTH — At Gull Cove Tuesday morning, Wenley Ferguson, director of habitat restoration for Save The Bay, held up a large photograph that was taken by a volunteer and shared on the MyCoast app — a tool used to document flood tide and storm conditions.

The photo was of an access road leading to the edge of a peninsula that once featured a boat ramp maintained by the R.I. Department of Environmental Management (RIDEM). Taken in November 2021 during a king tide — the highest predicted high tide of the year at a coastal location — it showed the narrow vehicular access road completed covered in water.

“As you can see from the photo, it was a sunny day — calm, no wind. It shows how vulnerable this area is,” said Ferguson, who attended a gathering of state officials and community partners as U.S. Sen. Sheldon Whitehouse announced a new $200,000 federal grant to RIDEM. In partnership with Save The Bay and The Nature Conservancy, to improve shoreline access and coastal resiliency at Gull Cove as well as Quonochontaug Pond Breachway in Charlestown.

Whitehouse, speaking at a podium set up close to the shoreline at the cove, said the two projects “will improve shoreline access for Rhode Islanders and strengthen coastal defenses against rising seas and storms. I worked hard to create the National Coastal Resilience Fund so the Ocean State could rely on a dedicated stream of funding to prepare for and adapt to climate change.”

Gull Cove has experienced increased flooding and erosion due to climate change, damaging parts of the coastline and complicating vehicle and pedestrian access, officials said. RIDEM will use the funding to complete designs and permitting for nature-based improvements. Plans include increasing native shoreline vegetation and restoring wetlands, as well as removing damaged infrastructure and reconfiguring vehicle access points.

“Here at Gull Cove, we’re going relocate this parking lot and use natural materials to provide a buffer between the access ways and the ocean,” said Terry Gray, RIDEM director.

Sea levels have risen more than a foot since 1930, said Gray, adding that the higher frequency of storms due to climate change has also hampered resiliency efforts. “No matter what we do in Rhode Island with respect to mitigation, we still have to protect our state from global changes that are happening,” he said.

Save The Bay Executive Director Jonathan Stone said climate change impacts are already being seen and felt around Narragansett Bay.

“Resilience projects, like the one taking place at Gull Cove, are critical to ensuring that our local habitats and ecosystems can remain healthy throughout these changes,” he said, noting the project will “decrease erosion, manage stormwater runoff, and improve public access. “Projects like these can only be achieved when many different groups and agencies come together to address the challenges that impact us all.”

John Torgan, Rhode Island state director of The Nature Conservancy, said “Rhode Island is a natural leader on climate resilience and these new projects illustrate that. We build scalable projects that use nature-based solutions to address coastal erosion and habitat loss in a way that is cost-effective and enhances public access to the tidal waters.”

Rep. Terri Cortvriend of Portsmouth, who has been a staunch advocate for increasing public access to the shoreline, liked what she heard on Tuesday.

“I haven’t heard of anyone being denied public access here, but Mother Nature is having an effect on public access. The fact that we’re trying to protect it is wonderful,” she said.

After the presentation, Ferguson said she and Caitlin Chaffee, reserve manager for the Narragansett Bay National Estuarine Research Reserve, identified Gull Cove as a potential resiliency project back in 2012. RIDEM had plans to repair the boat ramp, but decided not to due to the shallow slope, she said. The state ended up removing most of the concrete slabs to the ramp.

“They’re trying not to encourage a trailering of a boat in,” she said. “So, our goal is not to limit access out there, but to limit vehicular access. We’ve done this at other sites such as in Warwick, where cars were driven out to vulnerable areas, and they’re getting stuck. That could happen here. It could happen at night. It could be a public safety issue.”

As she spoke, two cars were parked at the edge of the small peninsula after using the access road. Several observers expressed surprise the road was even wide enough for such vehicles to pass through.

The project shouldn’t be too expensive, and much of it could be done internally by RIDEM, Ferguson said. It may involve a simple placement of boulders on the access road. People could still walk along it, or tote a kayak out to the end, she said.

The project would also entail removing manmade material and doing some bank regrading where possible. A nearby gully “has gotten worse due to stormwater runoff that is eroding the bank, so another component is to install a swale to slow down the water and allow it to infiltrate,” she said.

The last piece would be to remove some of the parking in the lower area — making sure there is still handicap accessibility — and using some of the R.I. Department of Transportation’s upper maintenance area off Route 24 North for parking, she said.

“The whole idea is to enhance public access and public safety, just limit vehicle use.”