A clever juvenile thief got caught red-handed with a lifted $20 bill, and women now have to pay poll taxes same as men. 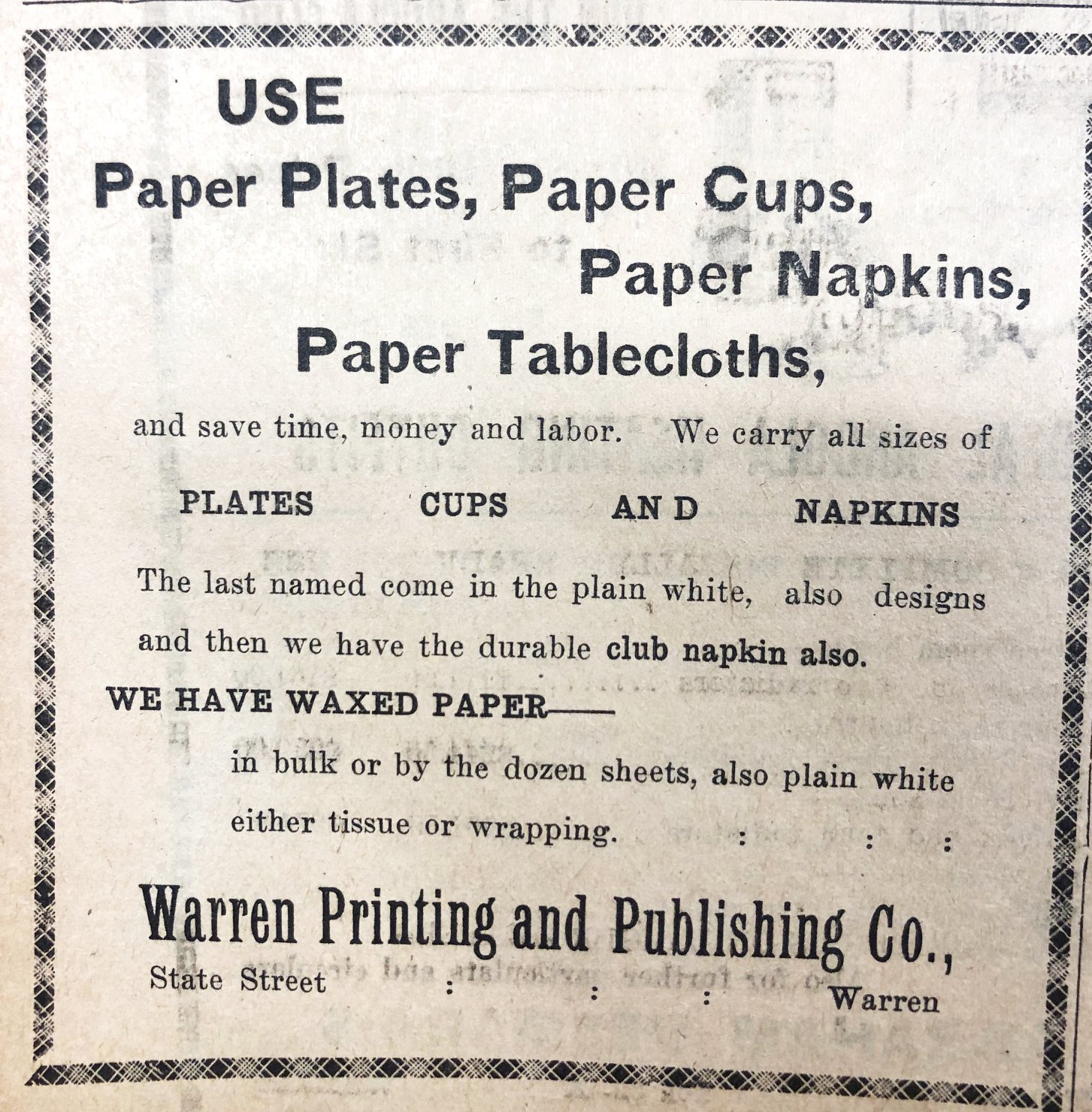 While it’s fun to see paper plates and cups worthy of such a prominent advertisement, we particularly love how excited they were about the waxed paper.
Posted Thursday, August 26, 2021 9:53 am

Taken from the pages of the Warren and Barrington Gazette this week in August 1921:

20¢ increase announced in Warren’s tax rate for the coming year
Women, as well as men, must pay poll tax this year for first time in history

A meeting of the Warren tax assessors was held Sunday afternoon and shortly after the meeting came the announcement of the tax rat¢ for 1921 — which will be $2.12 per hundred, an increase of 20¢ over last year, when the rate was $1.92.

The increase was expected by the taxpayers in general, who have realized that the increase in appropriations, despite the fact that many say they see little accomplished with the money appropriated, would boost the tax rate. Some of these people point to Bristol and say that there is a town despite the fact that large appropriations were made at the last financial town meeting than the previous year, nevertheless found enough new property or property that would permit of an increase in valuation to offset these and therefore gave to the people of Bristol decrease of 13¢ over the previous year.

The following figures are also given out at the tax assessors’ office:

$20 bill stolen by 13 years old lad from Demarara Grain Co.
Confessed to police that he took the money, when questioned

The mystery surrounding the disappearance of about $100 which amount Clifford Bailey, manager of the Warren branch of the Demara Grain Co., has been short in his accounts the past few weeks, gives promise of being solved.

Mr. Bailey has been in the habit of carrying the money paid by customers in his frock pocket. Lately when balancing up the accounts he has found a shortage on several occasions. He could not understand this as he had either had his coat on or it had been hanging in the office. He hunted for holes in the pocket, but found none. Saturday he took in a torn $20 bill. It was the only $20 bill which he took in. Saturday night, when he came to balance accounts the torn $20 was missing.

The theft this time was so large that Mr. Bailey decided that he’d let the police take a hand in the solving of the problem, which had been causing him many anxious moments. He accordingly reported the matter to Chief Walsh.

Chief Walsh did a little quiet work with the result that this morning he had found the lad, who confessed the theft of the $20 bill. The lad, who comes from a family whose honesty none would question in company with other boys had been seen hanging about the place at times. When questions by the police the lad, who is an exceedingly bright little fellow, admitted that he took the $20, saying he wanted to get money for the movies and for ice cream. But did he take the $20 to pay for these? No, he was far too bright for that, so he went into one of the dry goods stores and purchased some ribbon and some talcum powder, tendering the $20 bill in payment. Thus he secured the desired change and he had the ice cream and also went to the movies without arousing suspicions.

He turned over the remainder of the money, which was the larger part of the $20 to the chief and promised, after a severe lecture to reform and to pay back the remainder of that which he had taken. He would not say however that he had taken more than $20. When first sent home by the chief to get what was left of the $20 bill he returned with $17.75. The chief sent him away again and he came back with $2, leaving only a quarter of the $20 missing. The chief, who believes the boy has more than the $20 told him to go and get the rest and he thinks he will yet see more, as his idea is that the boy has hidden it away, so to have a fund to draw on.

100 Years ago in Warren: Boat bandits and twilight baseball

100 Years ago in Warren: Baseball, foxes and a young thief