The Blount story is one of a local business that has stood the test of time through creativity and a constant push to stay in front of the rapid changes inherent within the food industry. 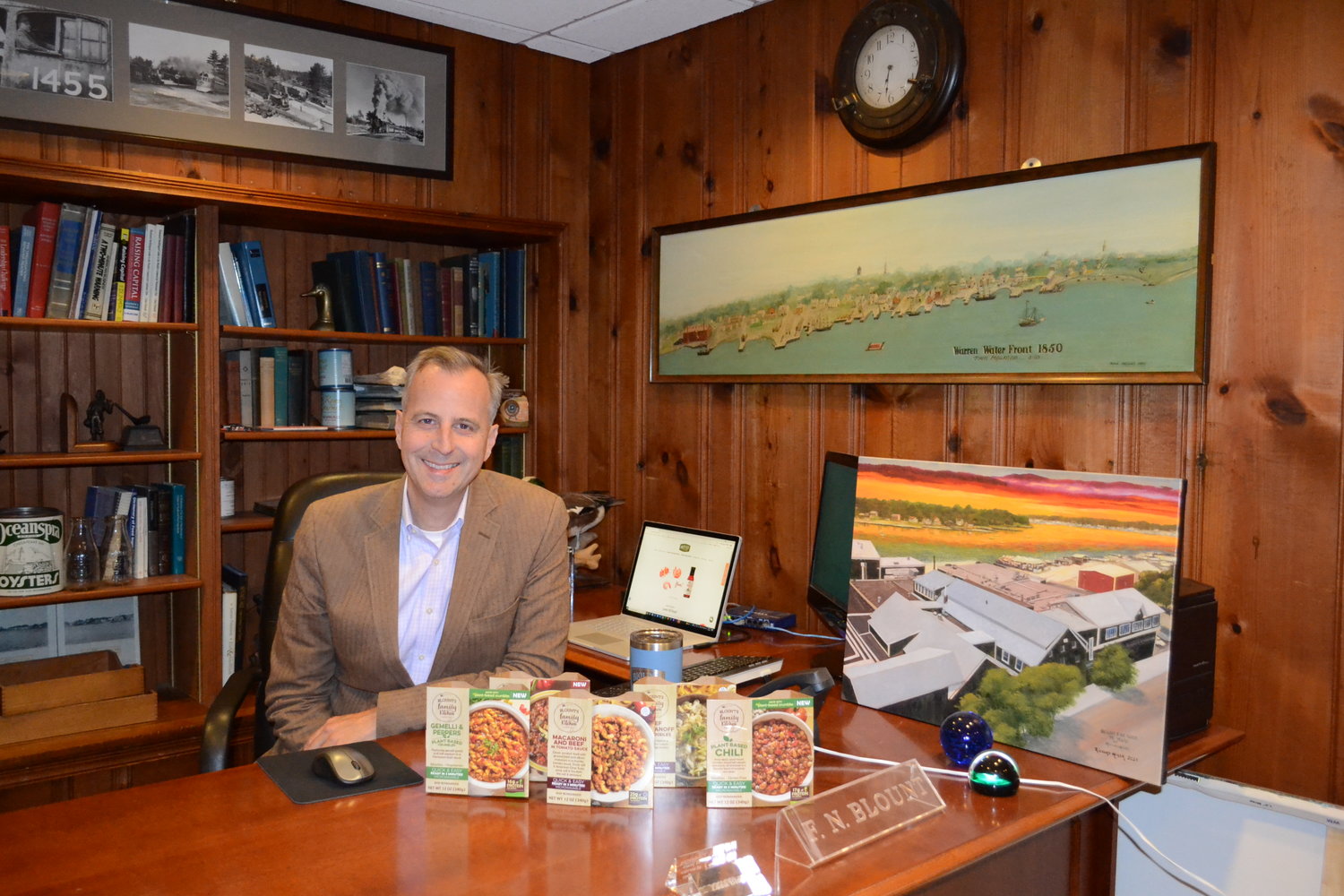 Todd Blount, President and CEO of Blount Fine Foods, is the third generation of his family to run the business since it incorporated in 1946. But the company has deeper roots than that, stretching back five generations to 1880.
Ethan Hartley 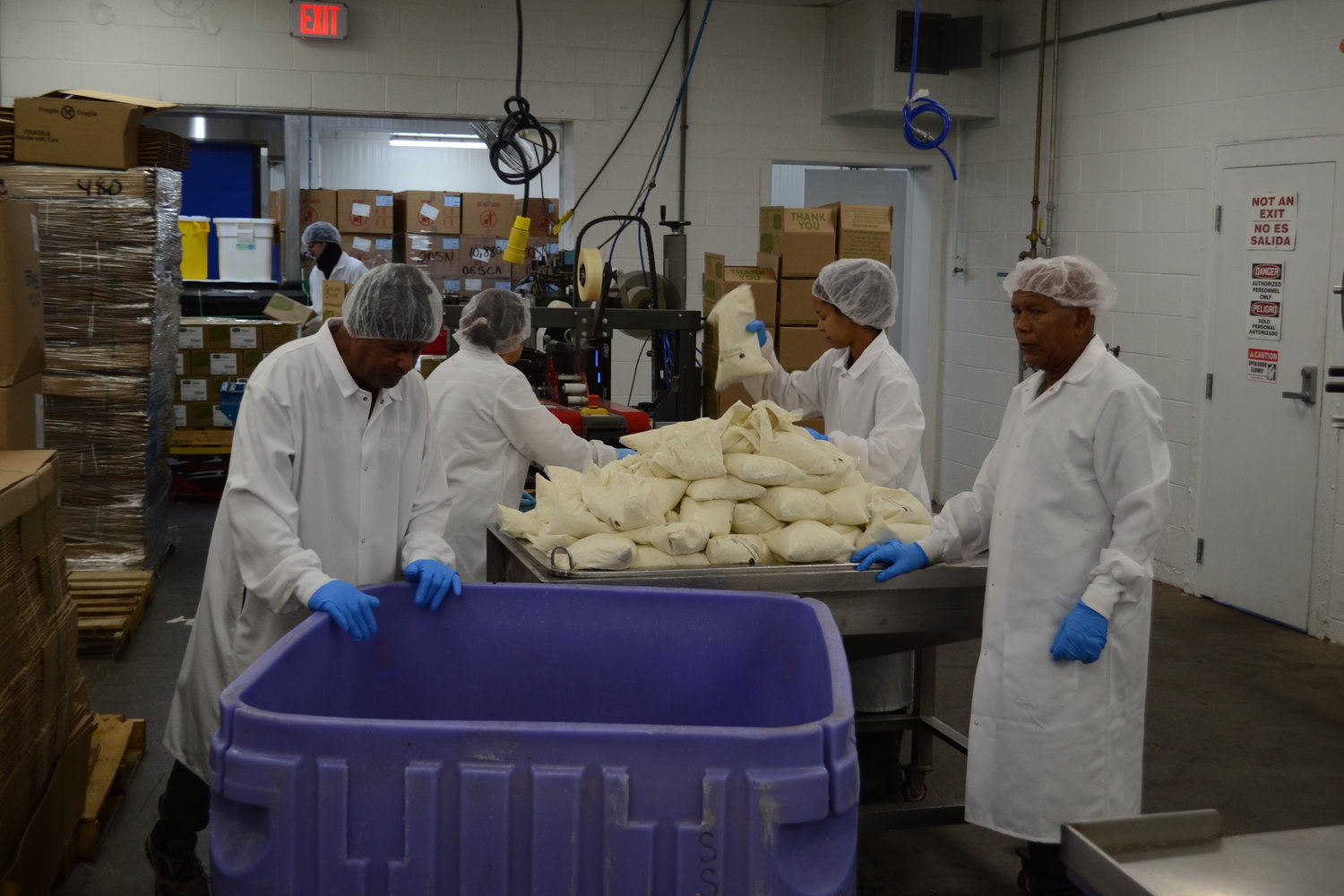 Workers prepare shipments of soup inside the Blount factory in Warren, where the company employs XXXX employees.
Ethan Hartley 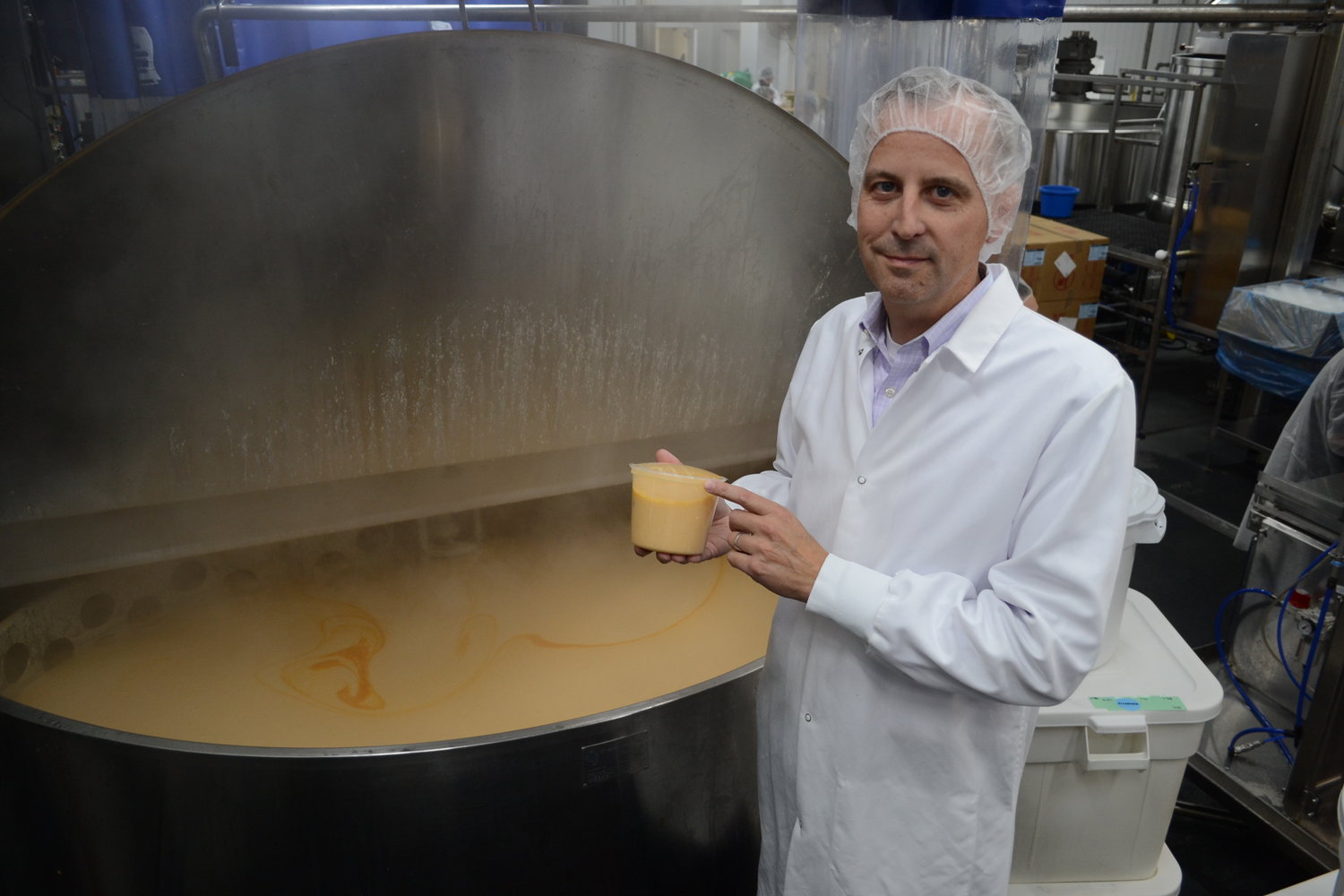 Todd Blount shows off a fresh batch of lobster bisque, one of the company’s top selling items, which is carried everywhere from small restaurants to supermarket giant Costco under their Kirkland brand.
Ethan Hartley 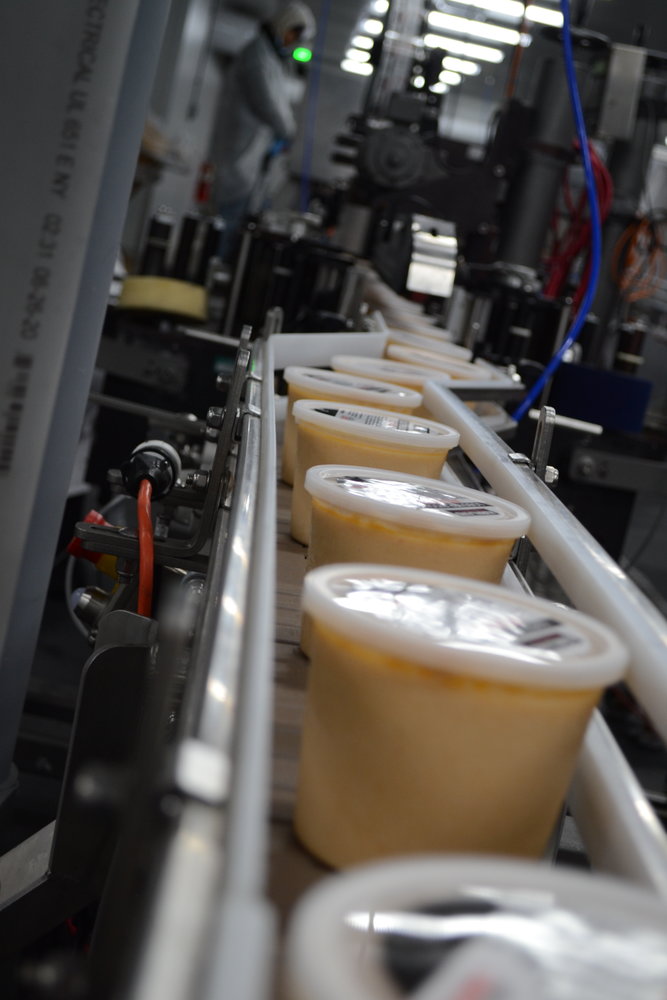 At Blount Fine Foods in Warren, the soup’s always on.

The homegrown company, which started officially 75 years ago in 1946 when it incorporated in Rhode Island, has roots that stretch back much further — when 18-year-old Eddie Blount started an oyster harvesting business in 1880 in West Barrington.

In the many decades since, Blount has experienced expansive growth that has culminated with their products being found everywhere, from small restaurants on the East Bay to some of the largest retail outlets in the country. Their four production hubs (in Warren; Fall River, Mass.; McKinney, Texas; and Portland, Ore.) together produce about 230 million pounds of soup and prepared foods each year.

The secret, according to Todd Blount — the third generation of his family to run the company — has been a constant willingness to change proactively with the times, and maintaining the courage to adapt to an ever-evolving marketplace.

“We’ve always transitioned to the next thing to be vibrant for the future. And we’ll continue to do that,” Blount said from his office inside the company’s Warren headquarters on Water Street.

From oysters to clams, soups and beyond
Blount’s very beginnings are marked by bold innovation pioneered by Todd’s grandfather, F. Nelson Blount, who created the Blount Seafood Corporation after purchasing the Narragansett Oyster Company and merging with the E. B. Blount’s Sons, and the Plymouth Packing Company.

What most saw as a struggling oyster and Bay clam market in Rhode Island, Nelson Blount saw as an opportunity to highlight the readily accessible and plentiful quahog industry that had yet to be properly tapped. As the traditional, more popular Bay clam industry stabilized, Blount invested in new equipment to process clams and concentrate broth, and the results spoke for themselves. They became a primary clam supplier to Campbell’s Soup in 1947, propelling the Blount name to widespread acclaim.

When the clam industry once again destabilized due to pollution and overfishing in the 60s, Blount would again fall back on classic Rhode Island quahogs as a lifeline to buoy them through the turbulence. In 1973 Nelson’s son, Ted, took over the company and carried the torch of innovation by retooling the factory to process sea clams, which had more broad appeal than quahogs and addressed the ongoing concerns of the shortage of clams in Narragansett Bay. This decision landed Blount in the cupboards of customers nationwide, as the company became the select supplier of clams for Campbell’s “Chunky Soup” brand.

The next step was expansion through diversification, resulting in a variety of new clam-based products being sold under a new “Point Judith” brand in the 1980s. The logical next step was to go from producing or supplying products separately, to doing both. Under various “contract packaging” deals, Blount produced and packaged soups for other company’s to sell under their own labels at retail outlets throughout the country. This would become a key foundational pillar for Blount’s meteoric growth in the years to come.

To-go becomes the go-to
Enter Todd Blount in 1994. Eventually running the company in 2000, he acknowledges the pressures of continuing the family legacy, and he has responded in the same manner that his father and grandfather did when faced with challenges — embrace the change, find the untapped potential.

Those opportunities presented in the form of prepared foods, a still-burgeoning industry at the time of his ascension to the company’s ownership. Blount saw the continuing and expanding opportunity for their products — and for the first time, non-seafood products — to be made available, ready-to-eat, in supermarkets and, specifically thinking as an innovator, at the deli counter.

“Even soup, at the time, was not a cold, to-go deli item. It was canned or maybe a hot item,” he said. “Now, we’ve helped pioneer the fresh, prepared foods at the deli, where we all like to get a last-minute dinner idea on the way home. That’s kind of where we live today.”

Beginning as the supplier of hot, ready-to-go soups for Shaw’s in 2001, other restaurants and supermarket chains caught onto the consumer’s demand for hot or cold, ready-to-serve items. Its productions demands boomed beyond the Warren plant’s capabilities, and Blount consolidated into a large facility in Fall River, Mass. in 2004. They officially became Blount Fine Foods in 2007.

With the increased footprint came the ability to produce a vast output, leading to nationwide retail expansion: producing and selling branded pre-packaged soups like Panera, Legal Sea Foods and Blount, in addition to store brands.

In 2012, Blount sold its seafood line in order to focus wholly on soup and prepared food production. The results since have been staggering. Compared to an output of around 5 million pounds 20 years ago, Blount now produces around 230 million pounds each year, comprised of about 50 different products that each sell in various sizes, and many sell under various private labels under contract packaging deals. And although they no longer harvest clams themselves, they still support the local fishing industry by procuring clam meat from Atlantic Capes Fisheries in Bristol.

Todd Blount’s vision for the business is quickly taking shape, as a whole host of ready-to-eat products produced by the company can now be found in the deli and refrigerated sections of some of the largest retailers, such as Costco, throughout the nation, as well as a blossoming venture into subscription-based services and e-commerce through partnerships with Hello Fresh and Instacart.

“Our goal is that we want to have the whole category and help the customer have all kinds of options for that category,” Blount said.

Keeping true to their roots
Despite a rise to national acclaim, Blount hasn’t forgotten his heritage. His office walls are lined with memorabilia from decades past, heirlooms from his ancestors and paintings and historic photos that illustrate the company’s origins and growth throughout time. The Warren plant itself, while small in terms of its overall production output, remains an important part of their identity. Important enough to have invested $10 million to renovate the space in 2020.

“At a cost, we kept this going relative to the history, the location, the clam shack, and it now plays a vital capacity role,” Blount said. “While it’s only about 5 percent of our capacity, in today’s world of labor and supply chain issues and COVID, this 5 percent makes the difference. Because it’s a little easier, in a smaller location like this, people are a little more reliable and connected to the process and product. Bigger is not always better.”

As mentioned, supply chain issues being faced worldwide has not spared Blount Fine Foods, either. Blount recalled recently having to buy an obscure part off eBay to fix a machine rather than wait for one to become available commercially. Shortages on products can vary week to week, from chicken meat to lemon juice.

“Creativity is the name of the game right now,” Blount said in regards to addressing current challenges. “We acknowledge what caused the problem but we’re committed to not using COVID or the supply chain as an excuse … We do believe this is a chance to outwit our competitors and secondary competitors.”

An important part of outwitting competitors is getting to fertile grounds first, which Blount seems to have accomplished through their focus on pre-packaged, ready-to-go products at the deli counter, where Blount said there is only about 20 percent consumer awareness — lots of room for growth and innovation.

All told, the Blount story is one of a local business that has stood the test of time through creativity and a constant push to stay in front of the rapid changes inherent within the food industry. Their success enables them to donate as much as 1 million pounds of food each year, which increased significantly in light of the lockdowns and food shortages of last year.

Even workforce shortages don’t phase Blount, despite having difficulty finding technical operators, warehouse workers and distribution personnel — or at least he’s not inclined to admit it.

“Our motto is, if it’s the great resignation, that means someone is ready to leave their company to come work at Blount,” he said.