About a decade ago, RISD-educated toy designer David M. Bird was sweeping his mom’s driveway in Pittsburgh, remembering fondly a job he had at Lego in Denmark, designing miniature figures for … 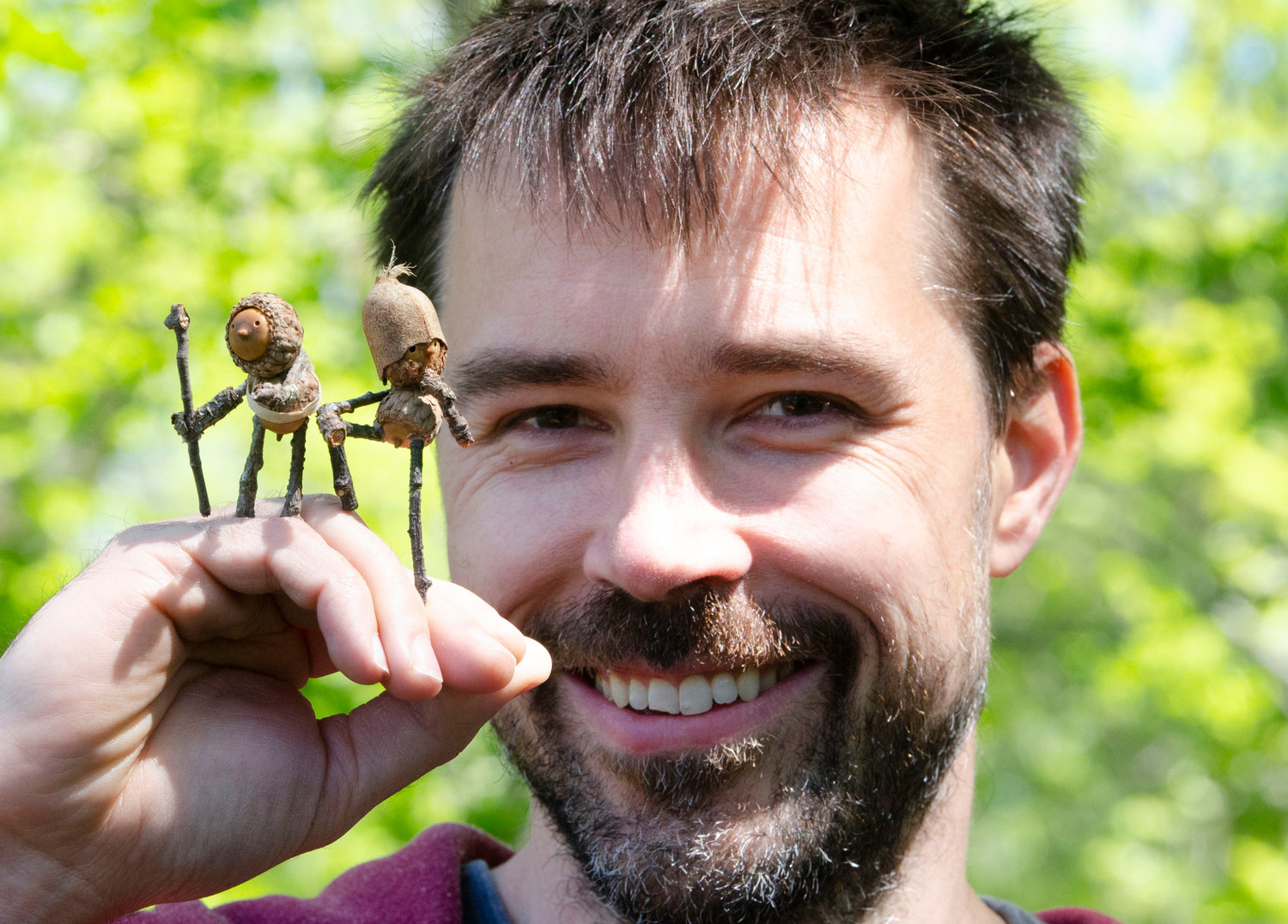 With an eye on the ground, David M. Bird assembles ‘Becorns’ — small figures constructed from found natural items — and leaves them to interact with wildlife.
Richard W. Dionne Jr. 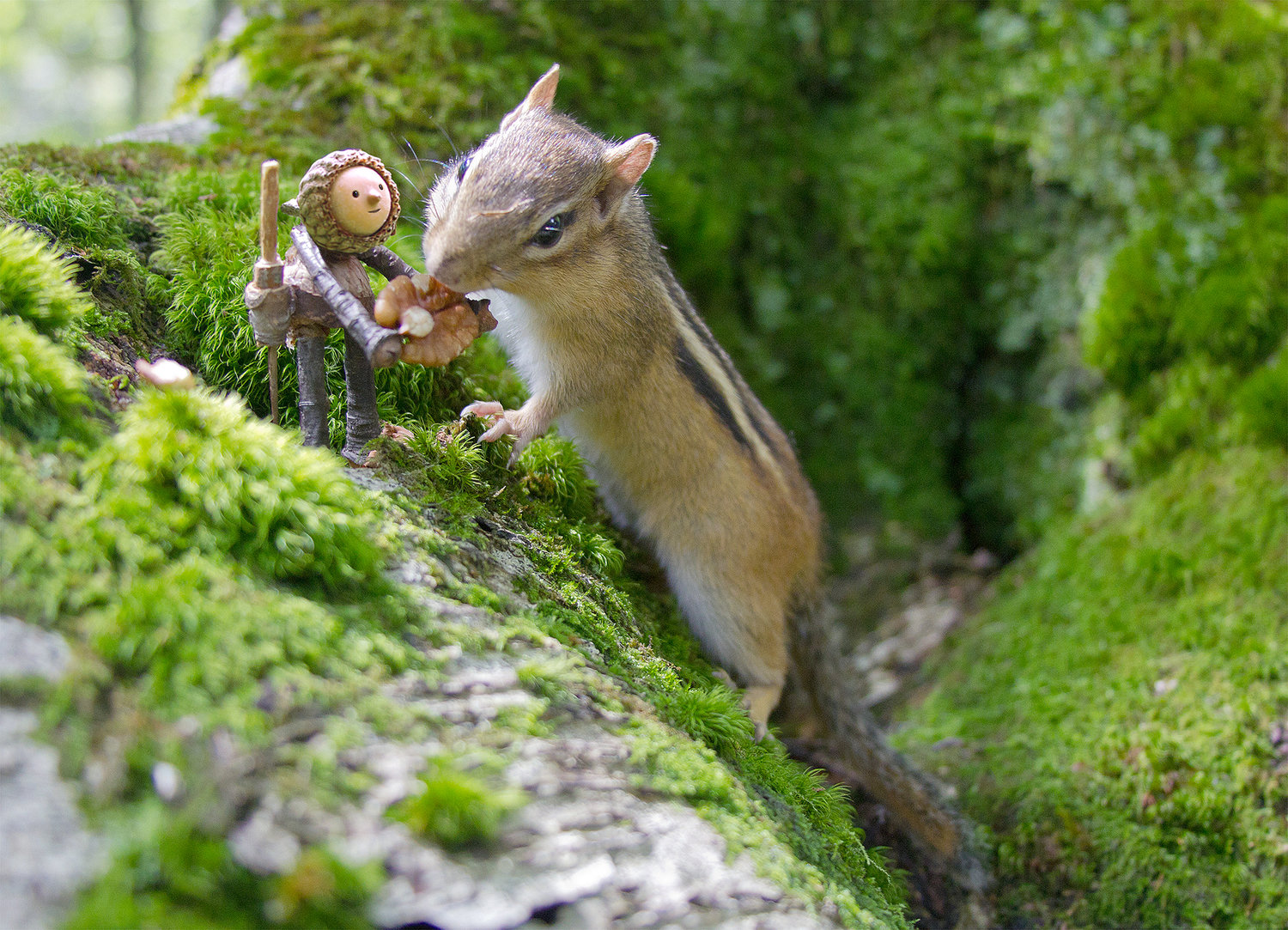 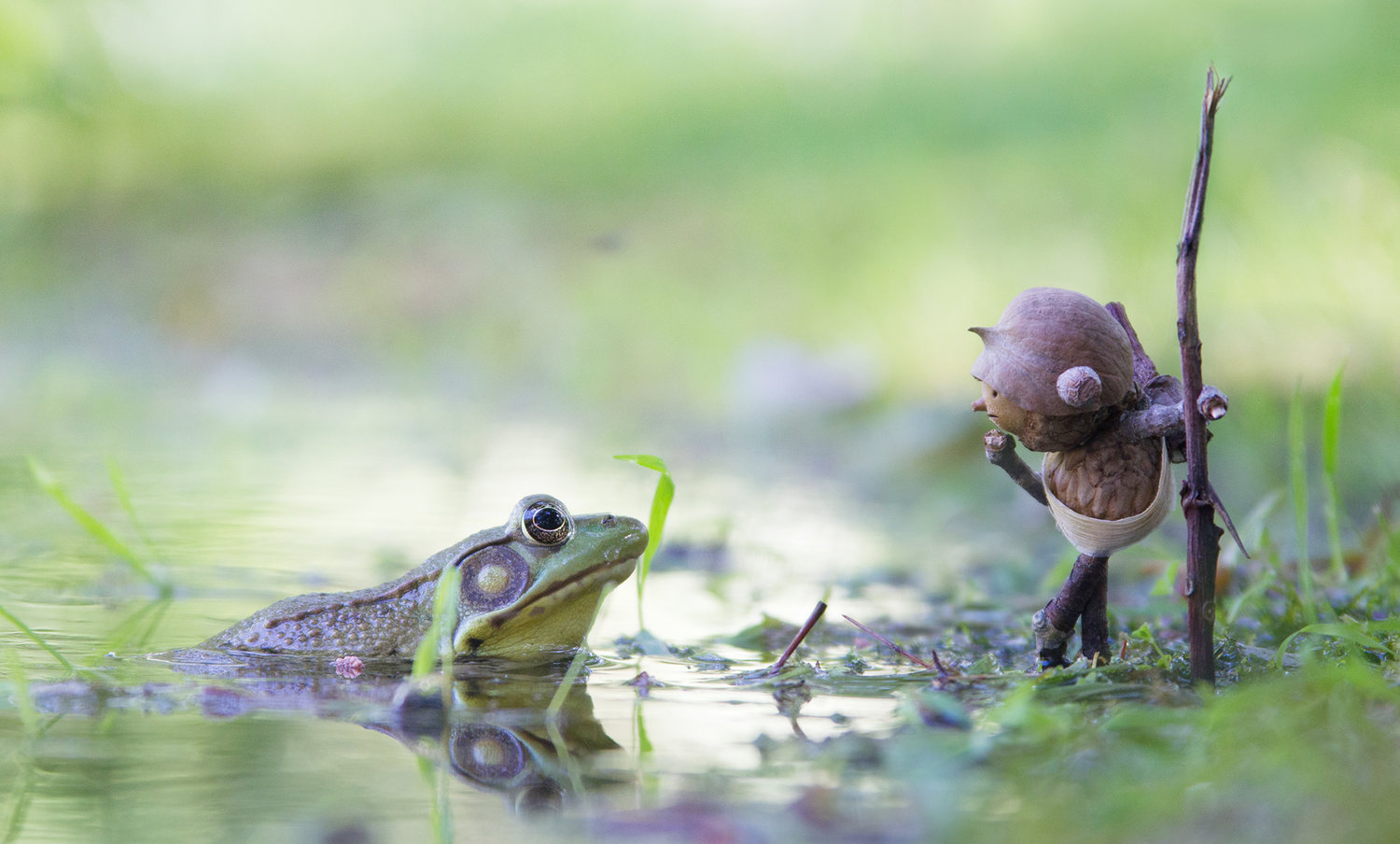 About a decade ago, RISD-educated toy designer David M. Bird was sweeping his mom’s driveway in Pittsburgh, remembering fondly a job he had at Lego in Denmark, designing miniature figures for the company’s Bionicle line. “I was sweeping and thinking how I missed Lego and I looked down and saw a stick that looked like a bug’s face,” he said. “And I realized I can create a whole world — and I don’t have to pay money for legos, I can build things out of what I find.”

The result is Becorns, small creatures crafted from found natural abstract parts — so called, he says, because they are the next evolutionary step from acorns. In addition to creating the characters, he will craft storylines and scenarios, and then position the Becorns nearby, set up his camera and wait for another character to complete the storyline — often a chipmunk, bird, or a frog.

The result is a whimsical world where acorn creatures grow on trees, feed birds, and defend themselves against squirrel attacks.

His photography is key to the process, especially where Becorns can be ephemeral, as when some of their components are floral, or, as been known to happen, one of the living characters in the storyline decides to abscond with a Becorn — an unpredictable eventuality that happens from time to time.

Mr. Bird says he knew nothing about photography at the beginning of the project, but over the past 10 years he has developed his craft and techniques.

"I usually use a bird feeder to entice the animals, which I place just off camera. I study where the animals like to go, and that’s where I aim the camera. I’ve found it’s nice to set up near my house so I can wait inside with a remote control and a cup of tea. I’ve tried laser triggers and motion detectors, but never had much luck with them."

While it usually takes Mr. Bird between one and three hours to make a Becorn, getting that perfect shot can take a lot longer. “Sometimes it takes a couple hours, sometimes days,” he said. “I once built a birdhouse specifically to attract Eastern Bluebirds. When a pair moved in, I set up a scene right outside their house and took pics as they came and went to feed their hatchlings. The whole process was about 4 months from beginning to end. I have a video of the process on my website.”

Sometimes, it’s not the Becorn that inspires his work, but the wildlife. “I saw an Oriole the other day and thought that I want to get a picture of one, and sometimes that’s the challenge — figuring out how to attract a particular bird,” he said.

Tree Callahan of Blithewold first met Mr. Bird at a Christmas market at the Pawtucket Armory a couple of years ago. “His table was surrounded by a mob of people, completely transfixed. That’s what drew me in,” she said. “I knew a Becorn exhibit would be a perfect fit for Blithewold.”

Though Mr. Bird continues to work as a freelance toy designer, he would love to make his Becorns artwork as full time as possible. He sells his prints online as well as at local shows and arts festivals. You can see them now in a can’t-miss exhibit and film at Blithewold’s visitor center. For more information, visit Blithewold.org, or visit www.davidmbird.com to see more of Mr. Bird’s work.