Artists design their guns for peace

For so many Americans, gun violence has become a top-of-mind issue, but one about which we feel helpless to effect change. For Boris Bally, a metalsmith and 10-year resident of Barrington, the …

Artists design their guns for peace 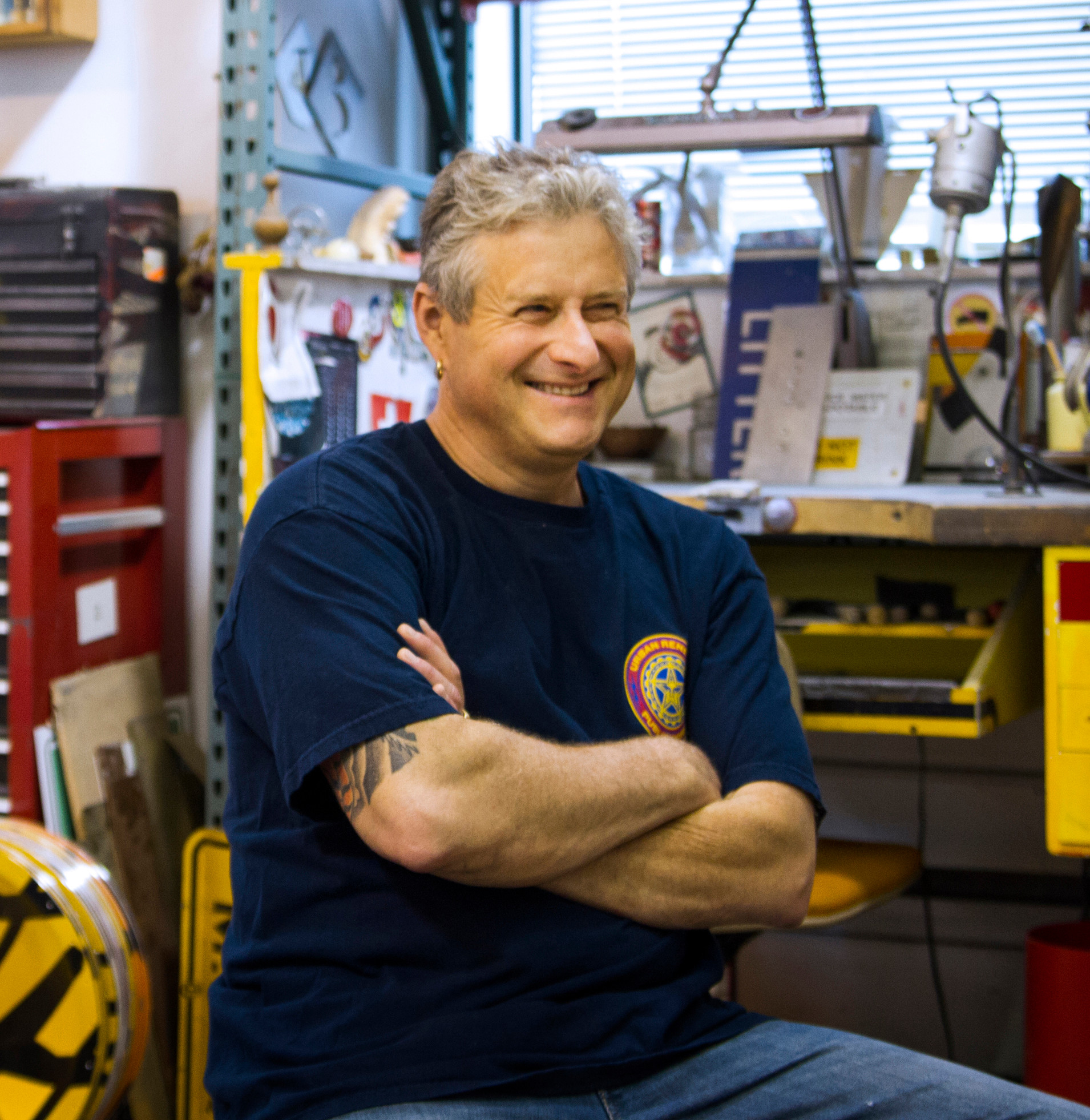 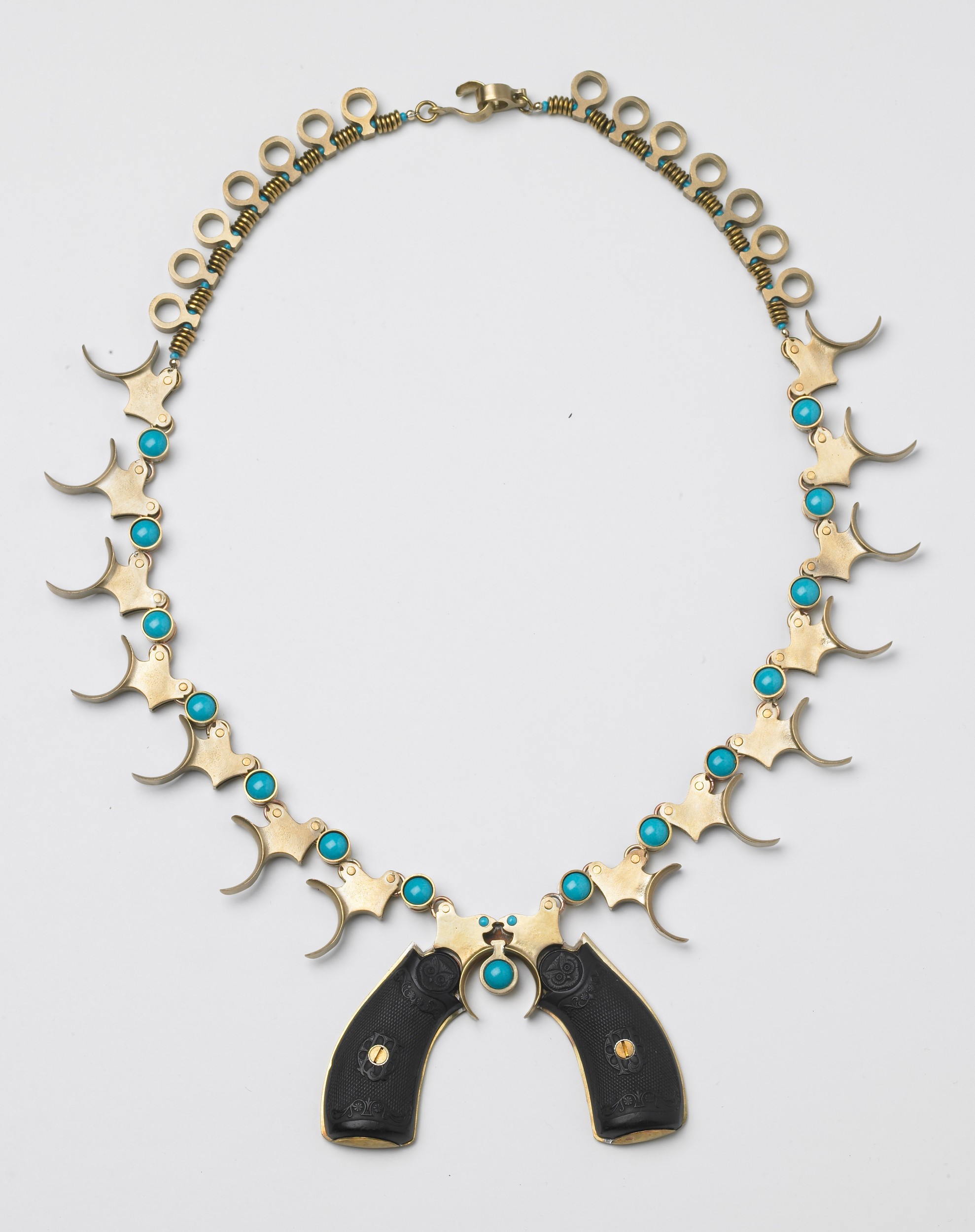 A "squash blossom" necklace created by Warren artist LeeAnn Herreid. According to Herreid, her involvement in the project has inspired many subsequent works.
Previous Next
Posted Thursday, July 20, 2017 12:24 pm
By Christy Nadalin

For so many Americans, gun violence has become a top-of-mind issue, but one about which we feel helpless to effect change. For Boris Bally, a metalsmith and 10-year resident of Barrington, the Newtown elementary school shooting was a turning point.

Bally decided to use his talent — and contacts in the art world — to speak out.
The result is a show called, " I.M.A.G.I.N.E. Peace Now.” It is an acronym: Innovative Merger (of) Art (and) Guns (to) Inspire New Expressions (of) Peace Now.
Bally issued a call to arms to well over 100 metal artists, asking for proposals for works of art created using a part of a firearm. He included some fairly strict parameters as far as weight and dimensions. "You have to put limits on artists," said LeeAnn Herreid of Warren, one of the participating artists. "It's good to have limits."

The proposals were vetted by a panel of three prominent jurors who joined Bally in selecting work for the show, including Emily Zilber of the Boston Museum of Fine Arts, Monica Moses of American Craft Magazine, and Providence artist Shepard Fairey. Accepted entrants were provided with disabled guns from which to craft their works.

The exhibition opened last fall and was on display at East Carolina University in North Carolina before opening in Boston in the winter. Since closing there in early June, it has traveled to Indiana, and will be in Louisville, Kentucky in the fall.

A hard-bound book, designed by Barrington resident Erin McManus, was published and is available through Bally's website at imaginepeacenow.org. (McManus' husband Keith produced a video for the project's Kickstarter campaign, which provided the necessary funds to get it off the ground.

Though Bally approached artists from all parts of his professional life, and they hailed from 6 different countries, a number of locals are involved with the project. In addition to Herreid and the McManuses, photographer Aaron Usher of Pawtucket took a number of photographs for the book, and many of the featured artworks were created by Providence-area artists.

The project is also serving as a fundraiser. All works produced for the exhibition are for sale. (Herreid's squash blossom necklace has already sold to a collector) and a percentage of sales proceeds will be donated to the Brady Campaign and the Rhode Island Coalition Against Gun Violence, as well as to the Society of North American Goldsmiths.

"I was honored to be invited," said Herreid, who spent 10 solid days on her squash blossom necklace (a traditional native American necklace design that originated with the Navajo), fashioned from a gun barrel cut into several cross sections. Her piece has since inspired a whole new series of work. Herreid enjoyed everything about the experience, calling the show one of the best she has ever been involved with. "The quality of the work is fantastic, the book is amazing, and I love discussing it. It was all so well thought out."

Bally points out that I.M.A.G.I.N.E Peace Now is not anti-gun, a position echoed by book designer Erin McManus. "He's so passionate about gun control," she said. So, as it turned out, were the artists that responded to his call "We thought it would be a lot smaller," she said. "But so many artists committed to these amazing pieces. It just got bigger and bigger."

As Bally expressed his position in the exhibition catalogue, “Hands make pistols. Pistols fit ergonomically into hands. We respect the handcraft that goes into making the weapon as an object. Do we not have the power to transcend these threatening objects by transforming them beyond their deadly, utilitarian design? Can’t art defuse violence?”

The exhibit's next stops after Louisville are not sure, but Bally has his eye on an international audience. The United States might have an exceptionally ingrained gun culture, but peace can transcend political borders.