After tapering down his team's practices … 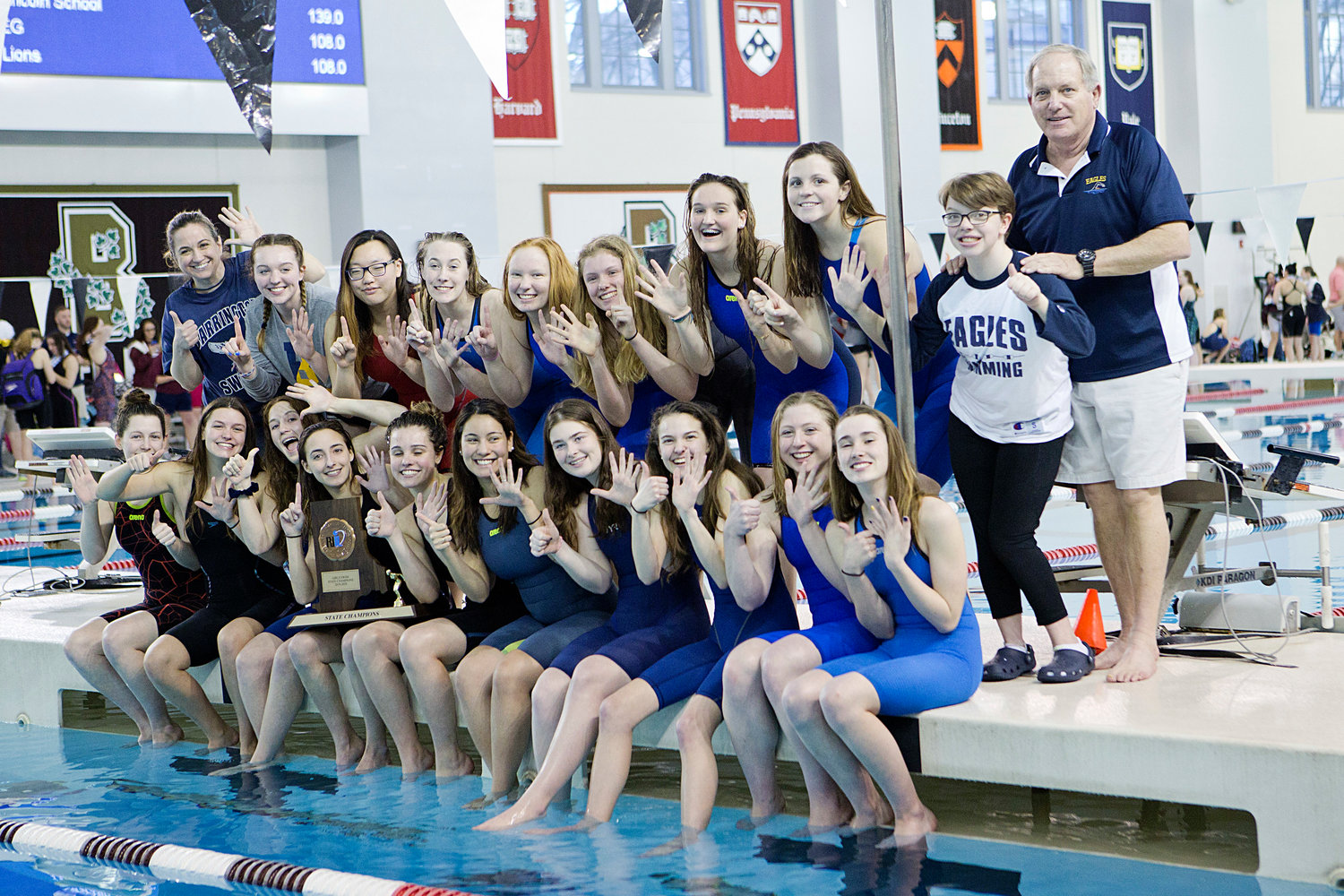 The Barrington High School girls swim team poses for a photo after becoming state champions for the sixth consecutive year, on Saturday.
Photo by Julie Furtado 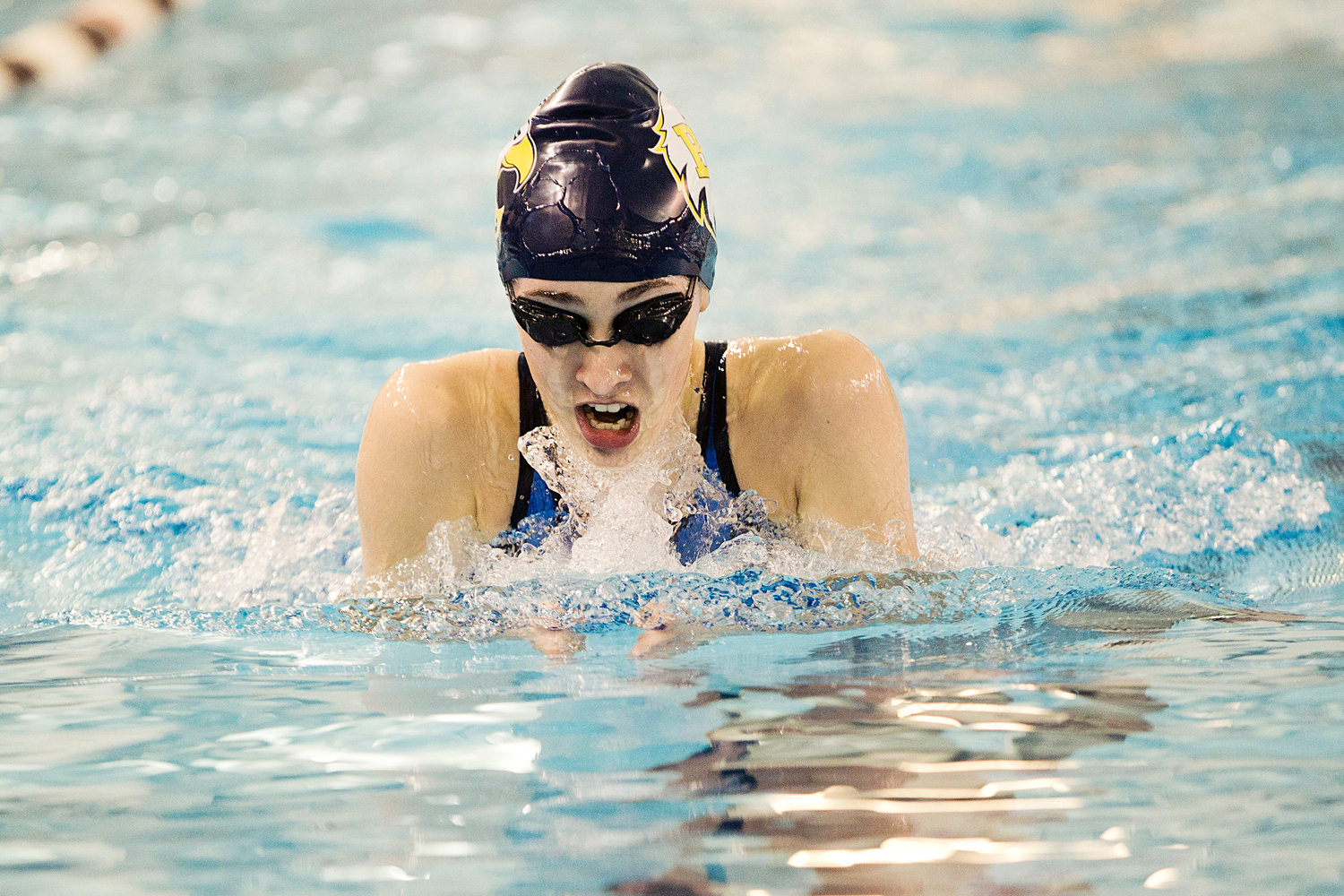 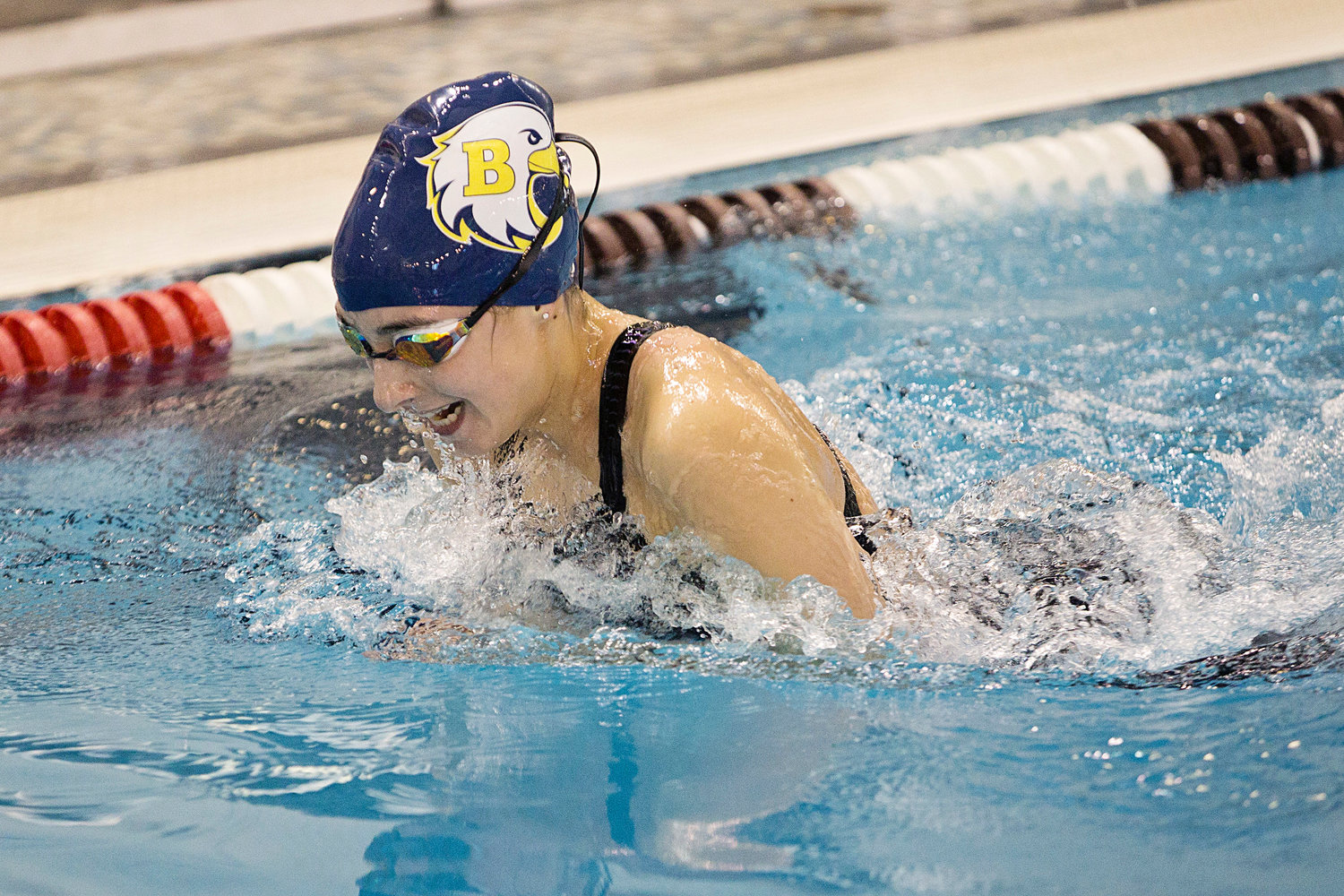 Claire Pomfret takes a breath while competing in the girls 100 breaststroke event, at the state championship meet, Saturday.
Photo by Julie Furtado 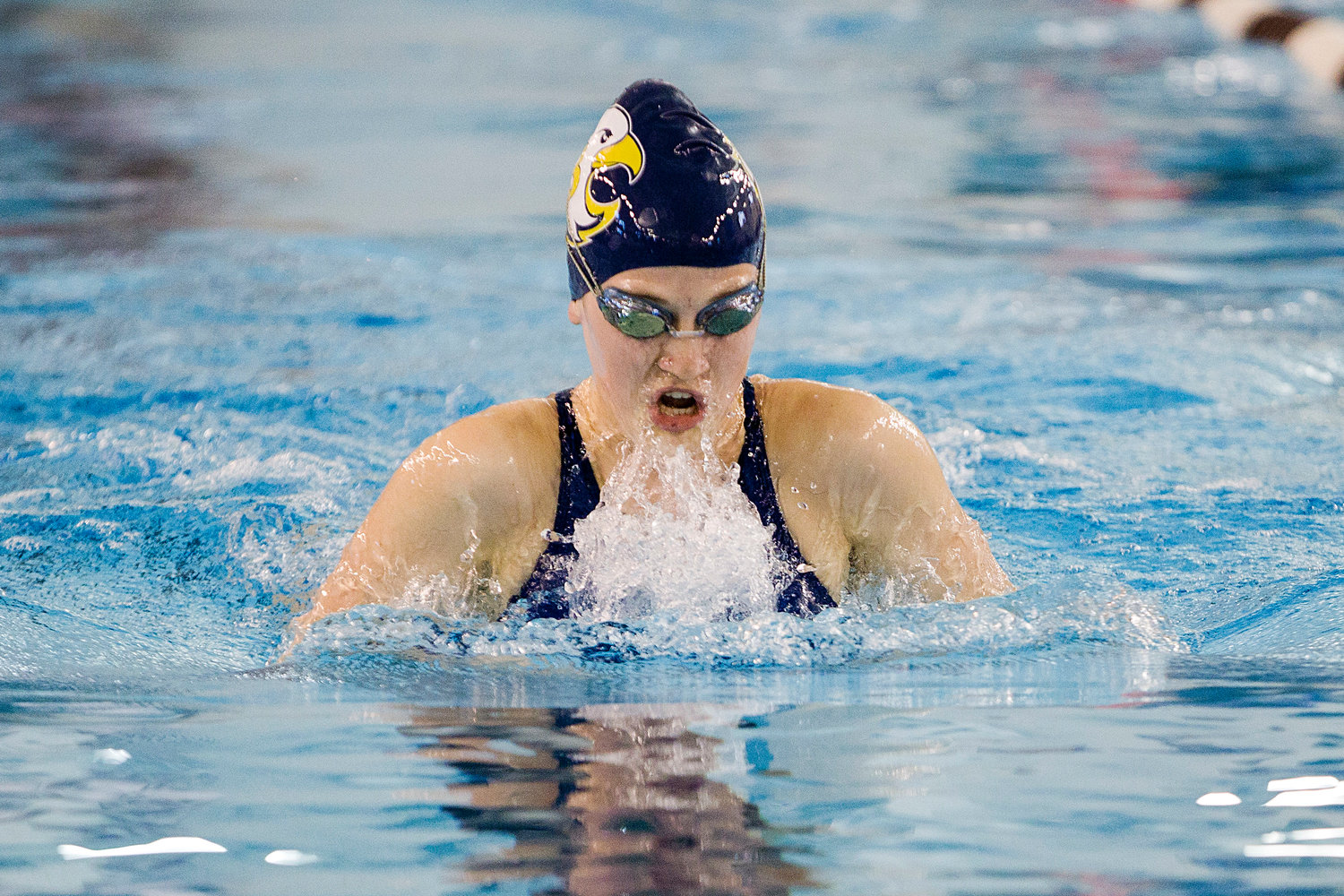 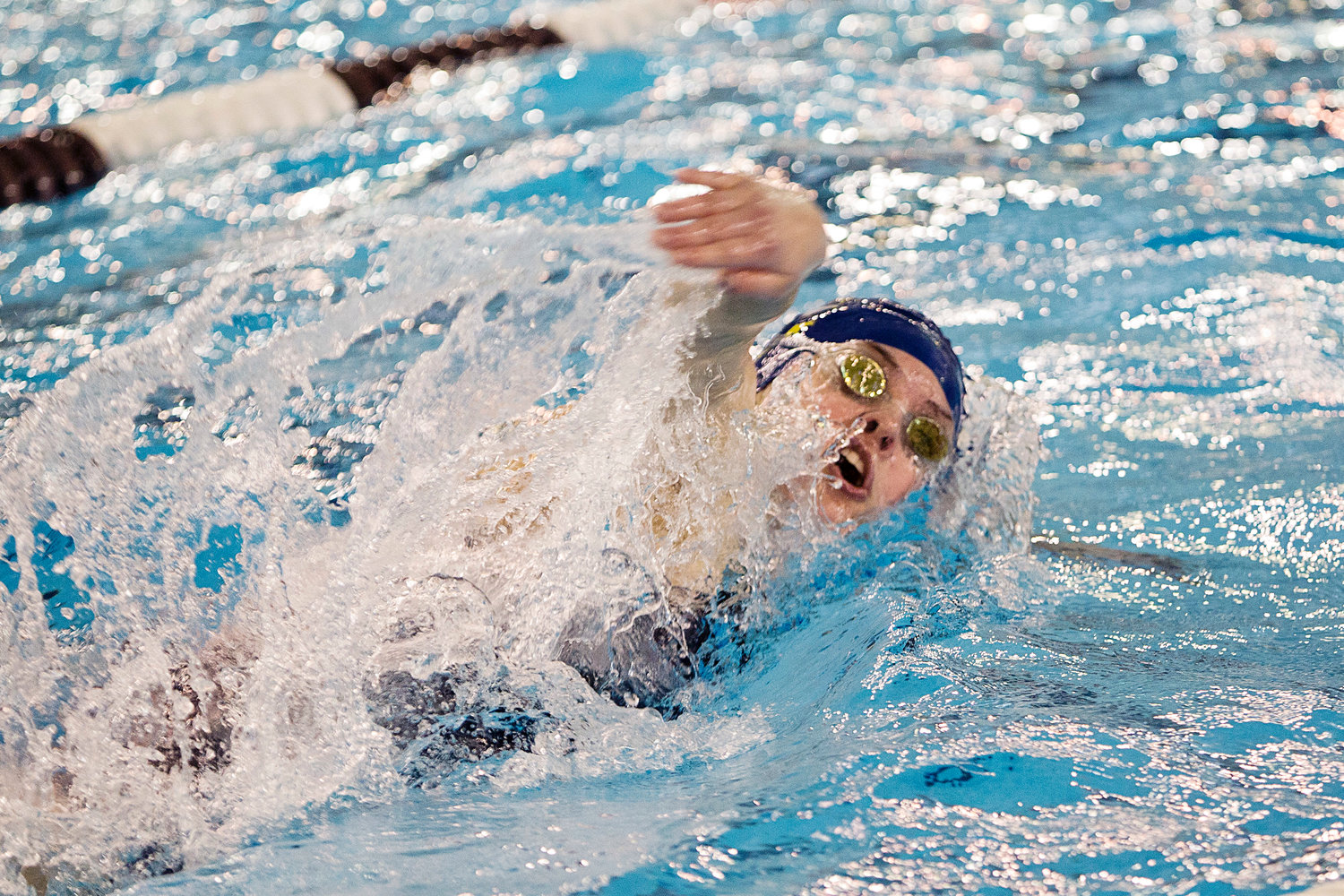 Sydni Diehl turns for a quick breath while competing in the 100 freestyle event, at the state championship meet, Saturday.
Photo by Julie Furtado 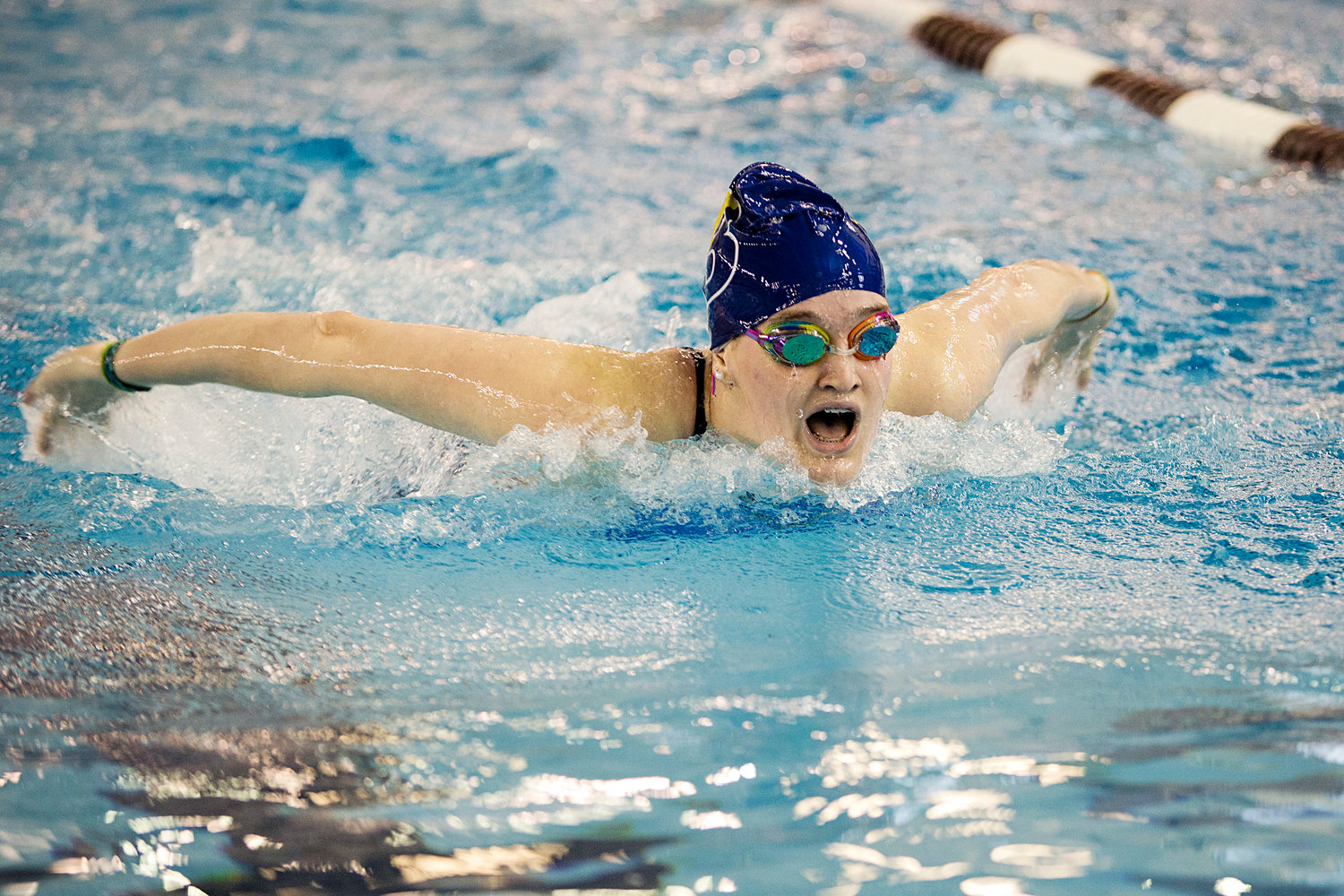 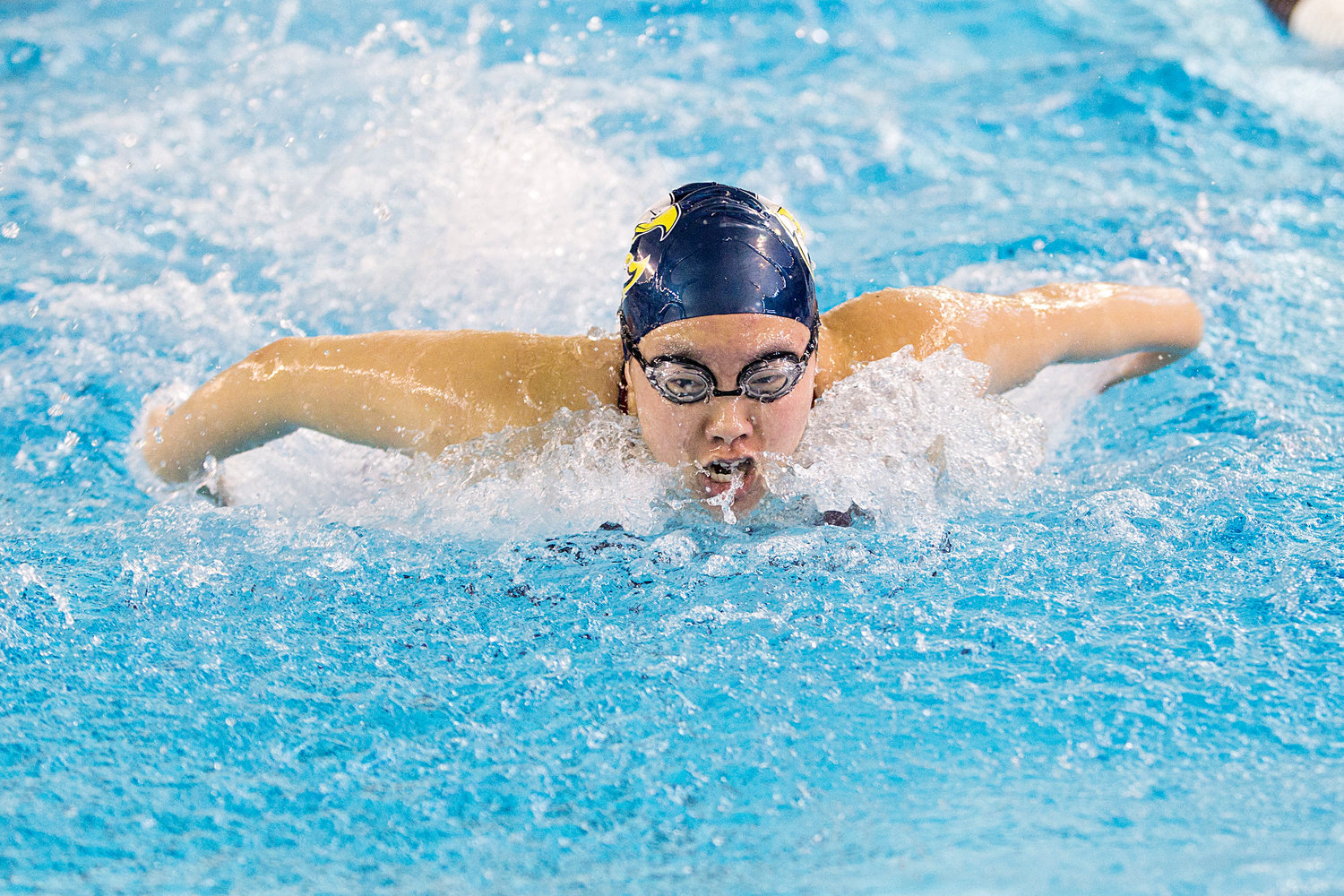 Barrington's Amy Zhao cuts through the water while competing in the 100 butterfly event at the state championship meet, Saturday.
Photo by Julie Furtado 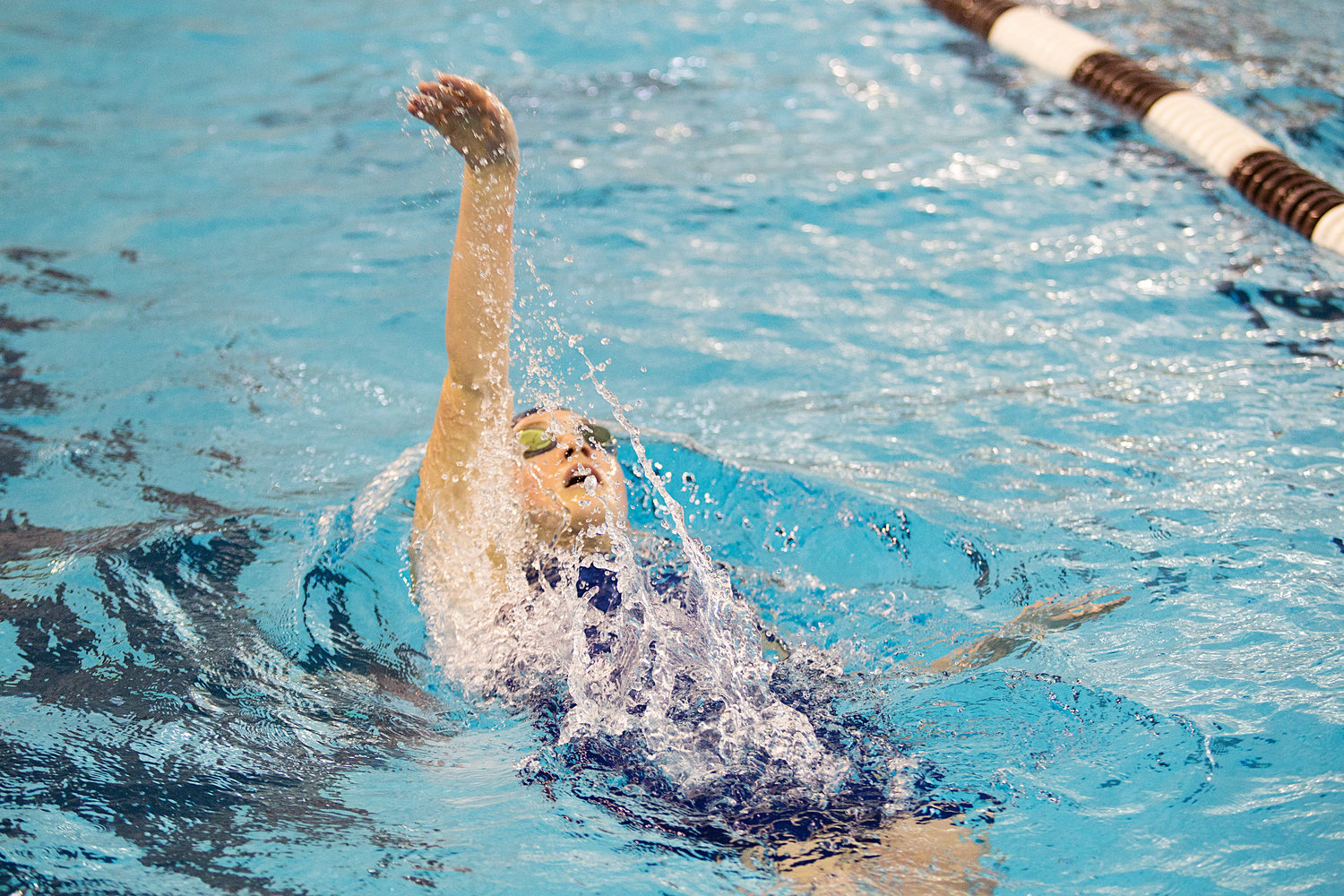 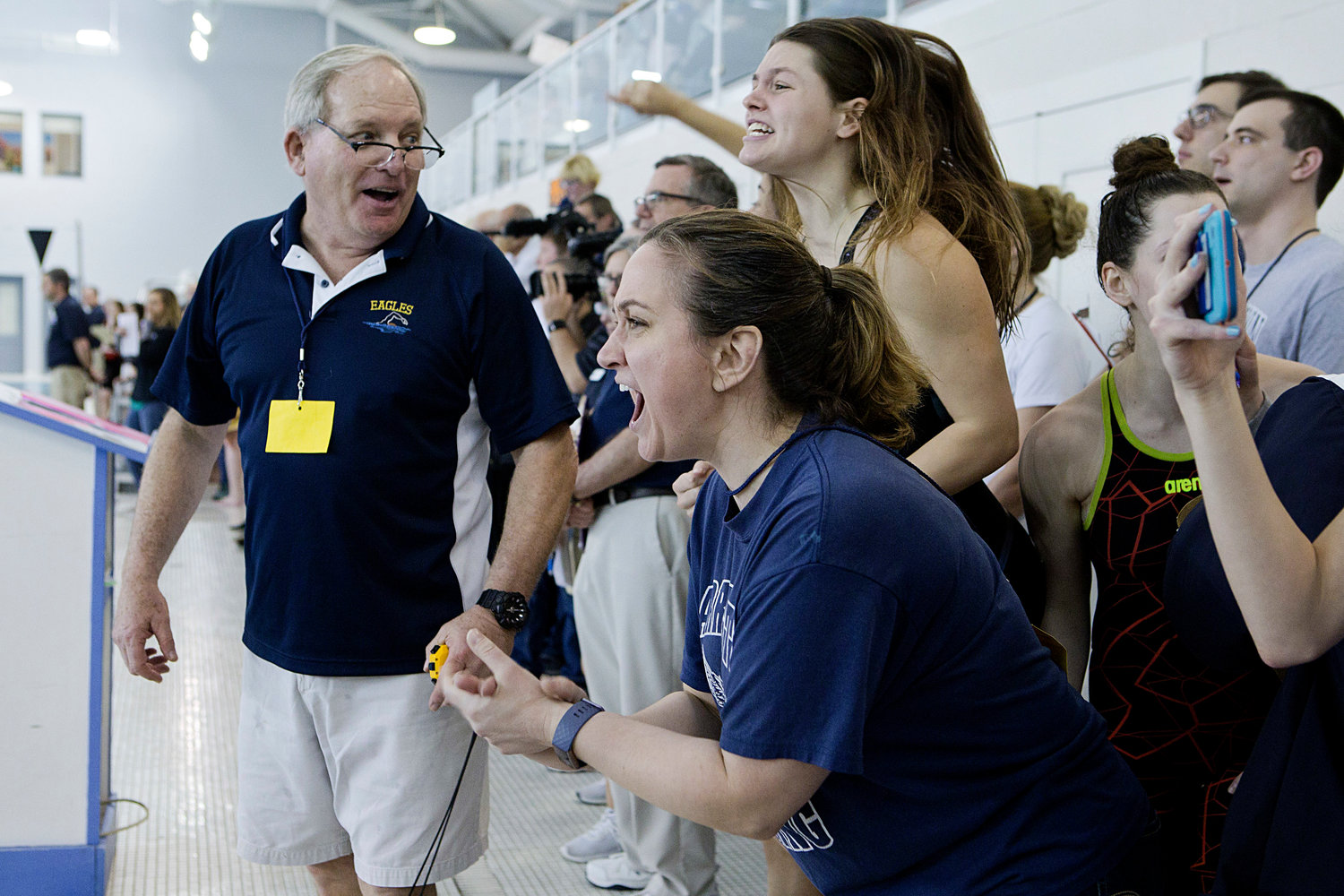 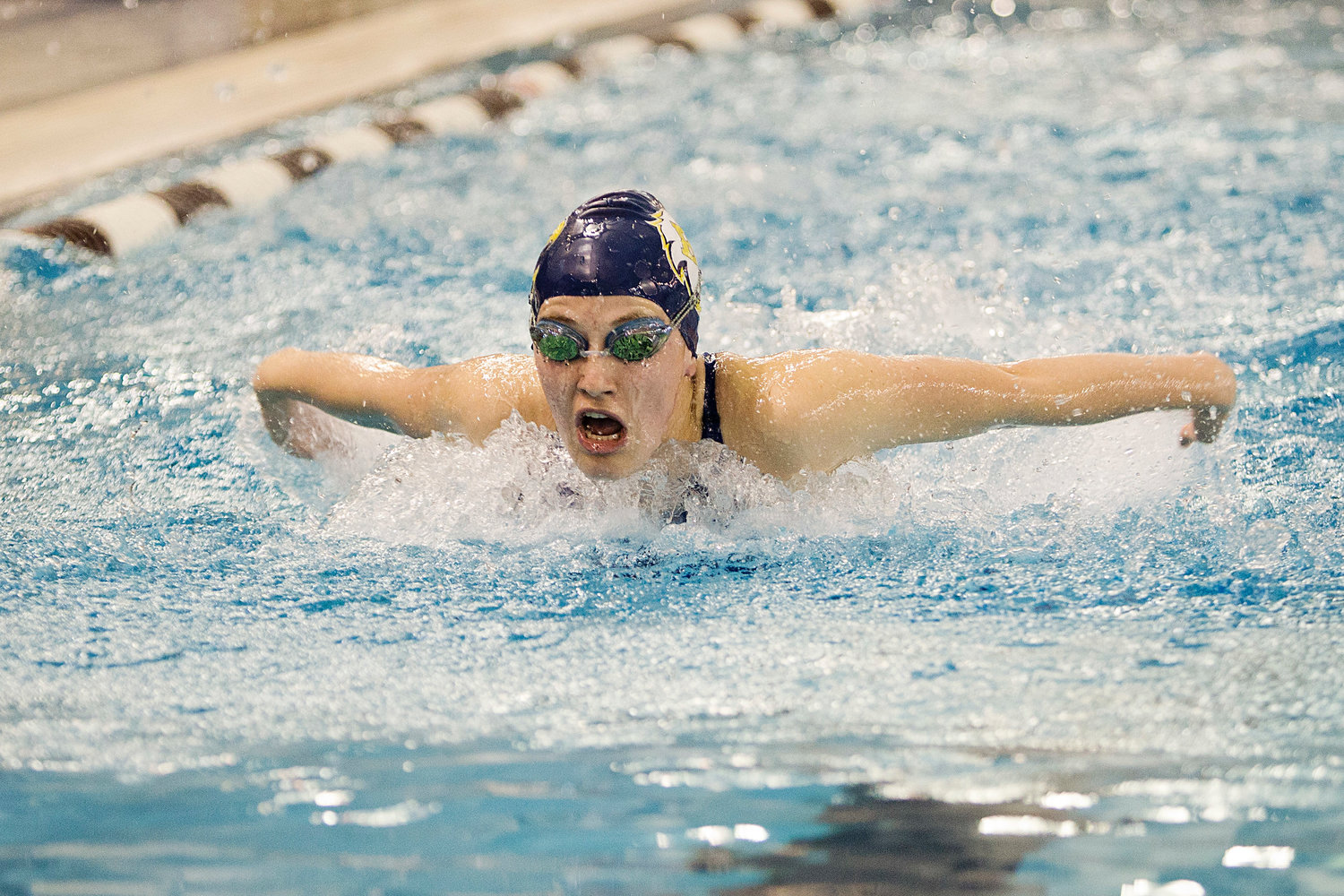 Barrington's Ellie Wind comes up for air while competing in the girls 200 individual medley at the state championship meet, Saturday.
Photo by Julie Furtado 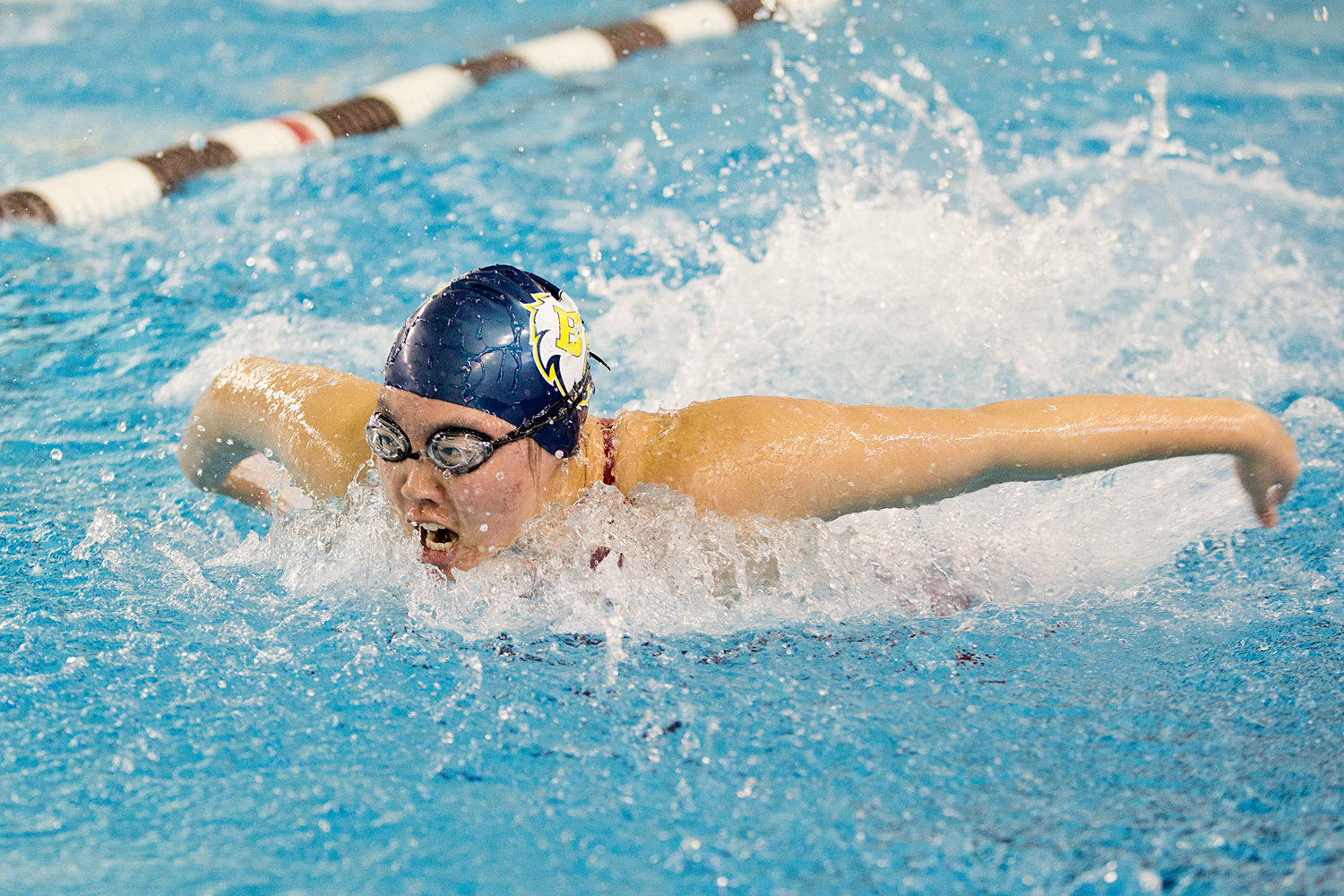 Amy Zhao swims the butterfly portion of the 200 medley at the state championship meet, Saturday.
Photo by Julie Furtado 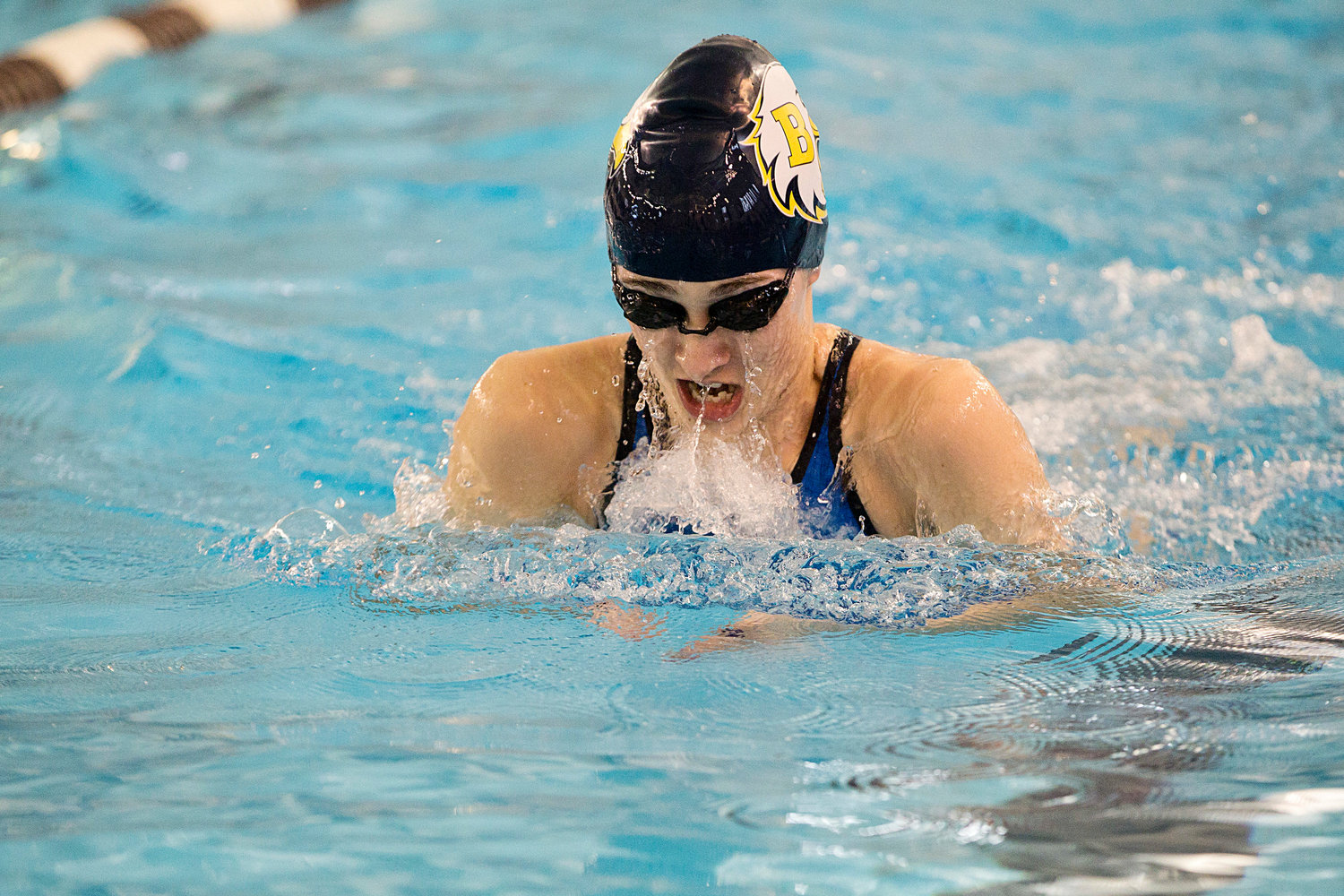 Kristen Baker swims the breaststroke portion of the girls 200 medley at the state championship meet, Saturday.
Photo by Julie Furtado 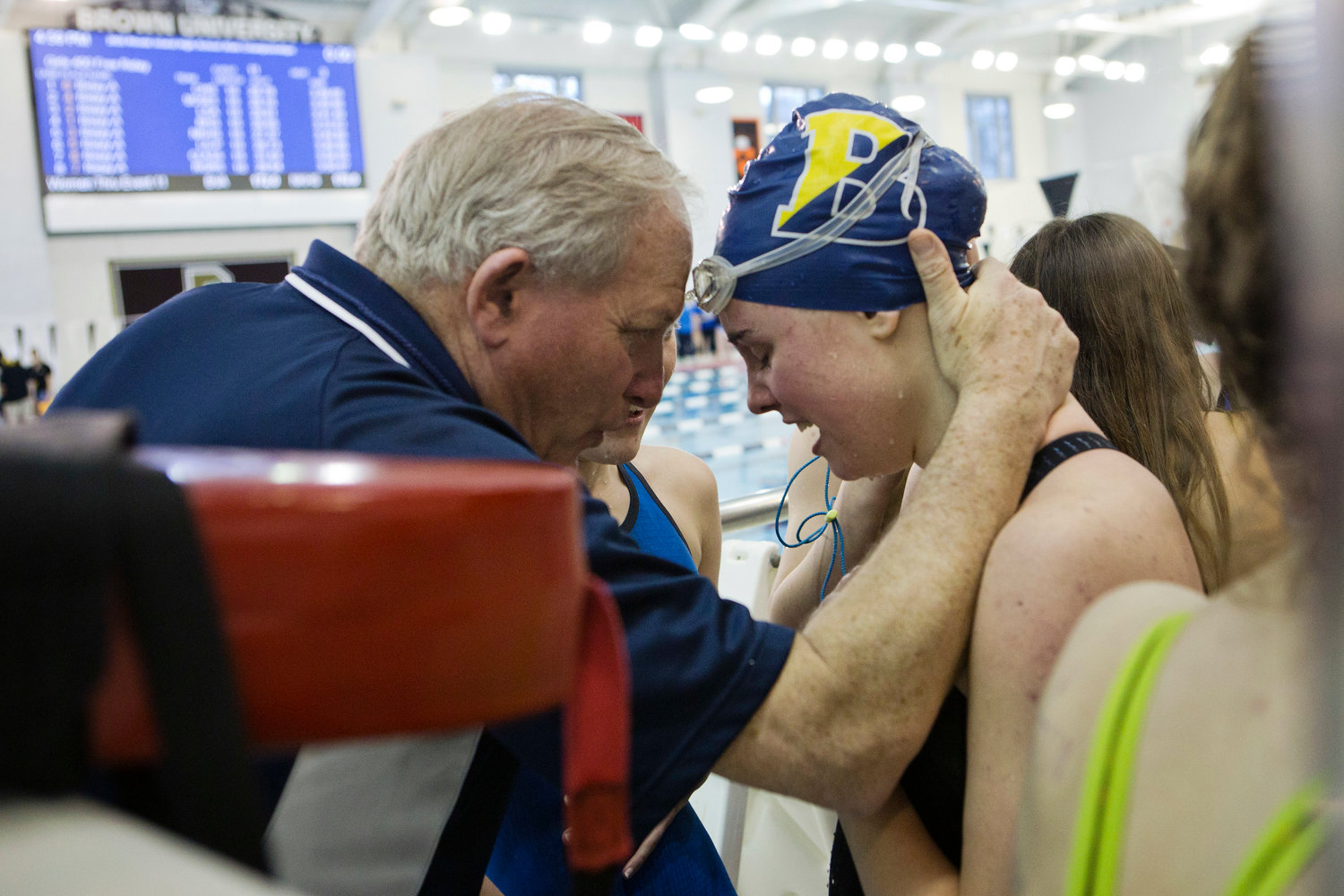 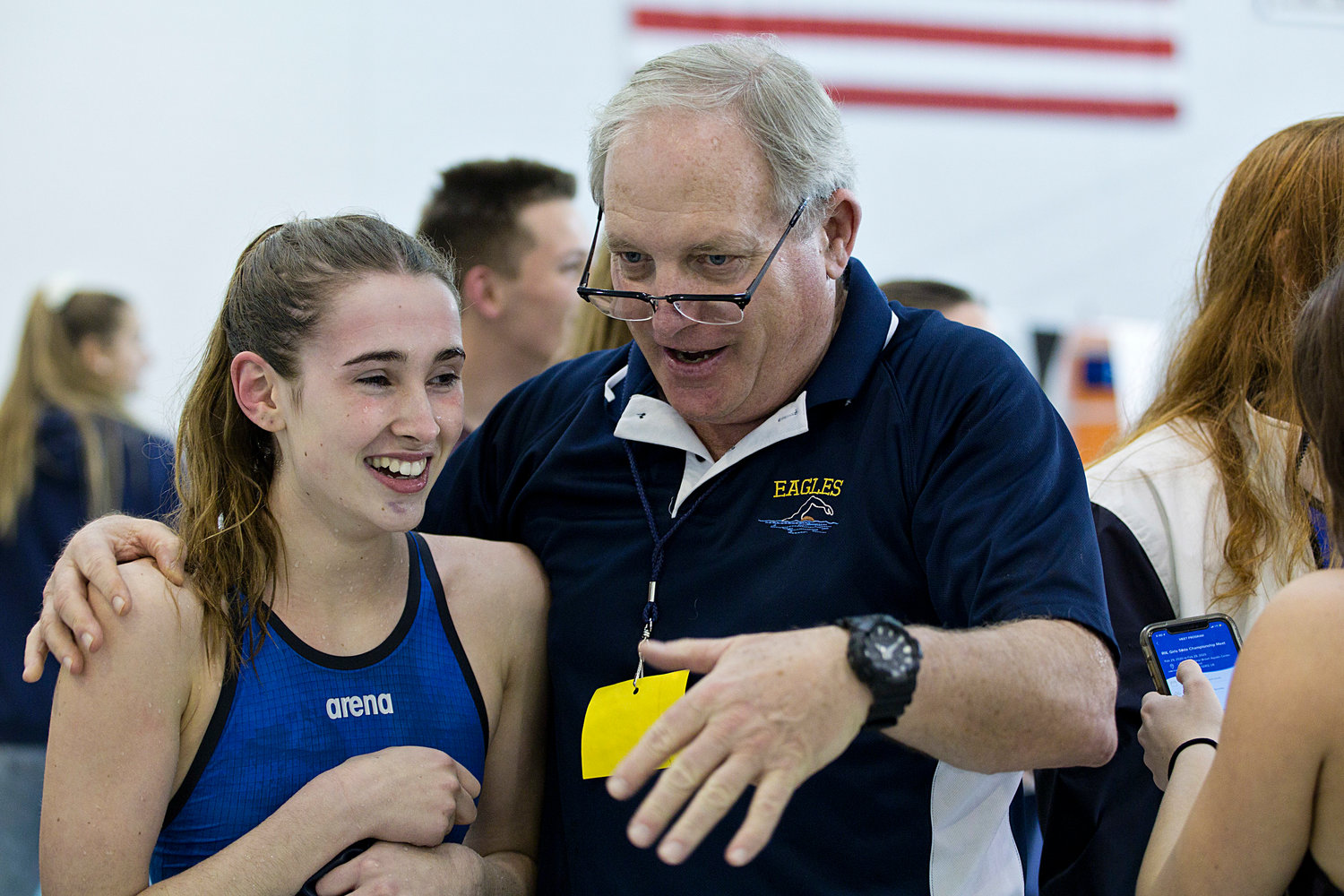 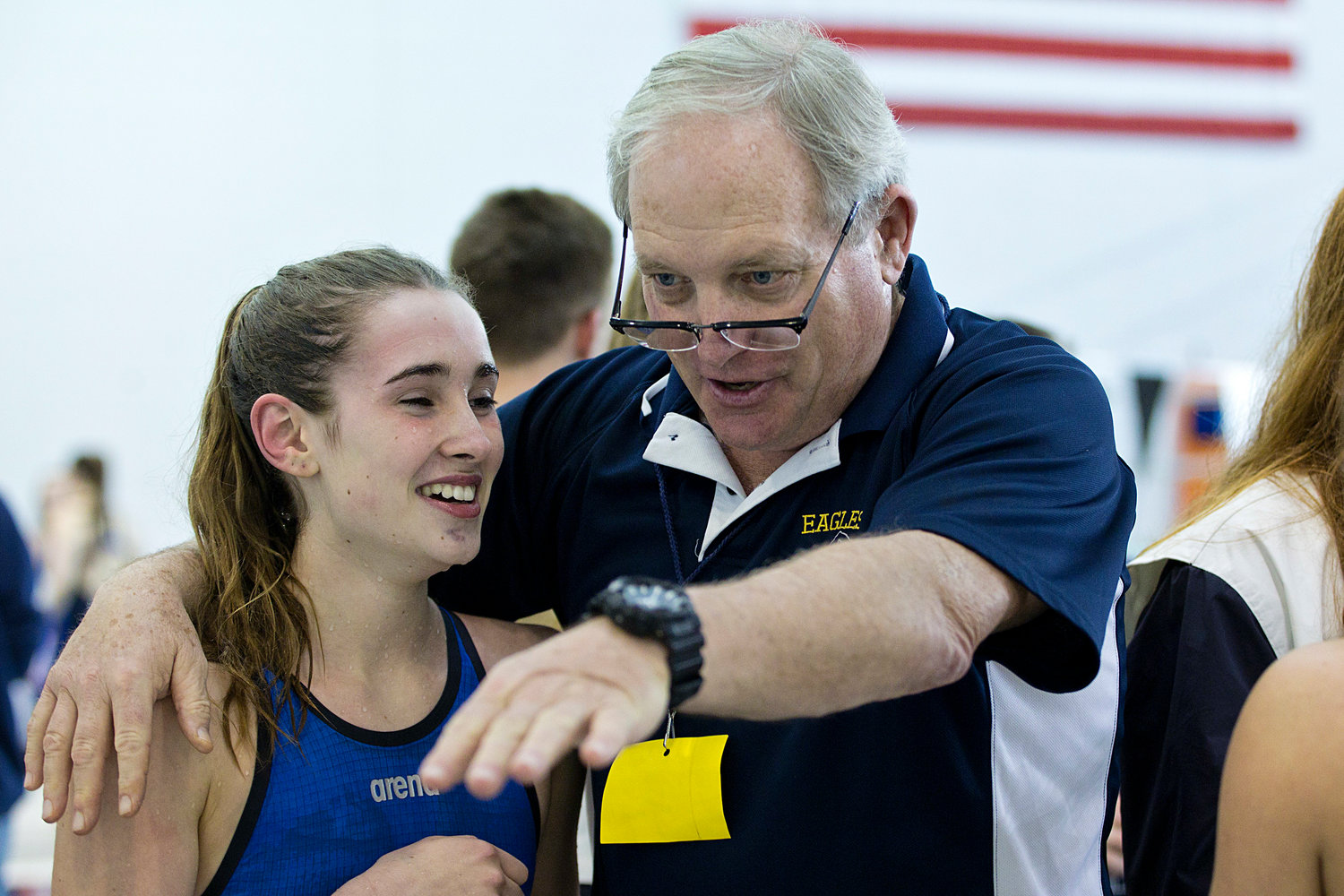 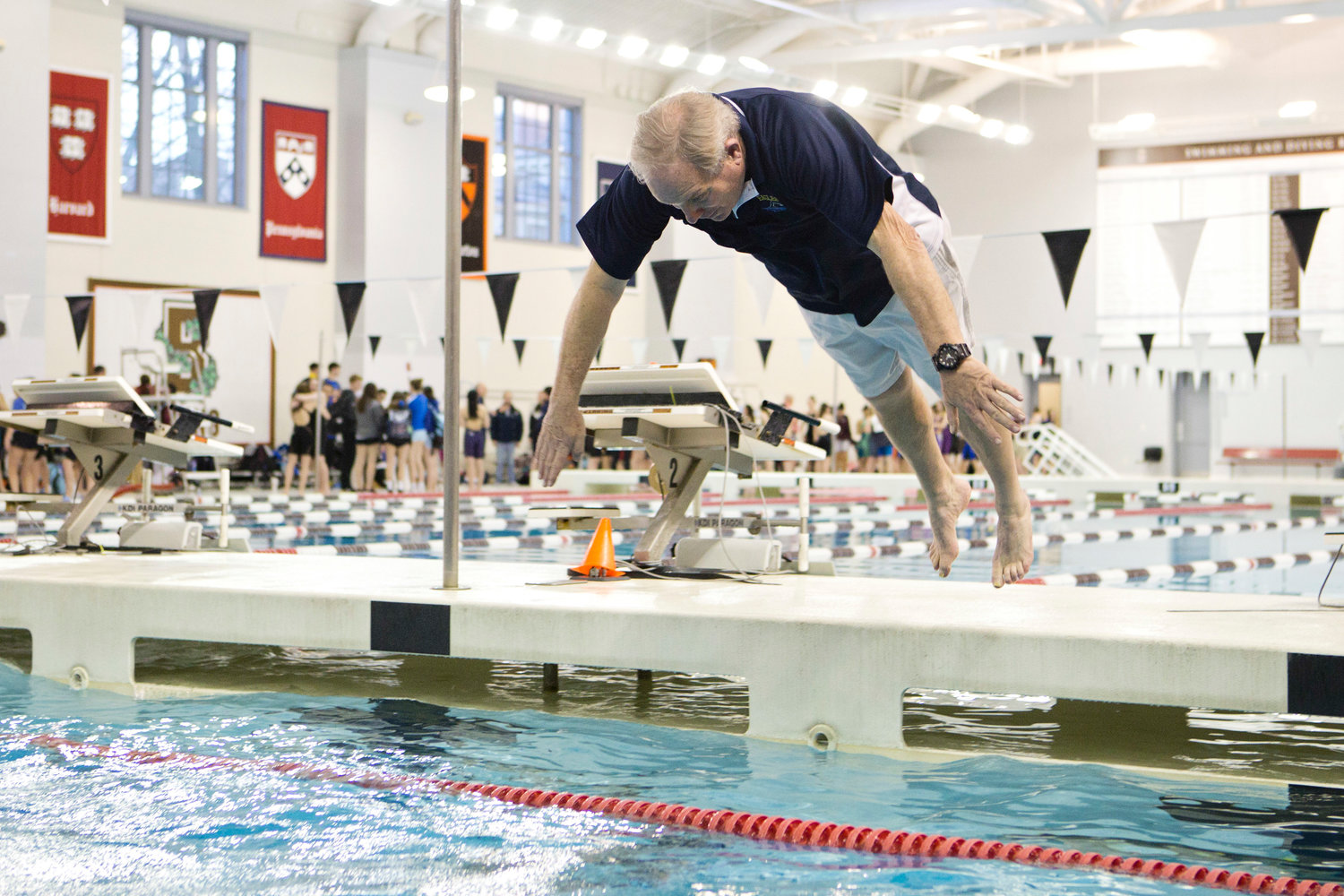 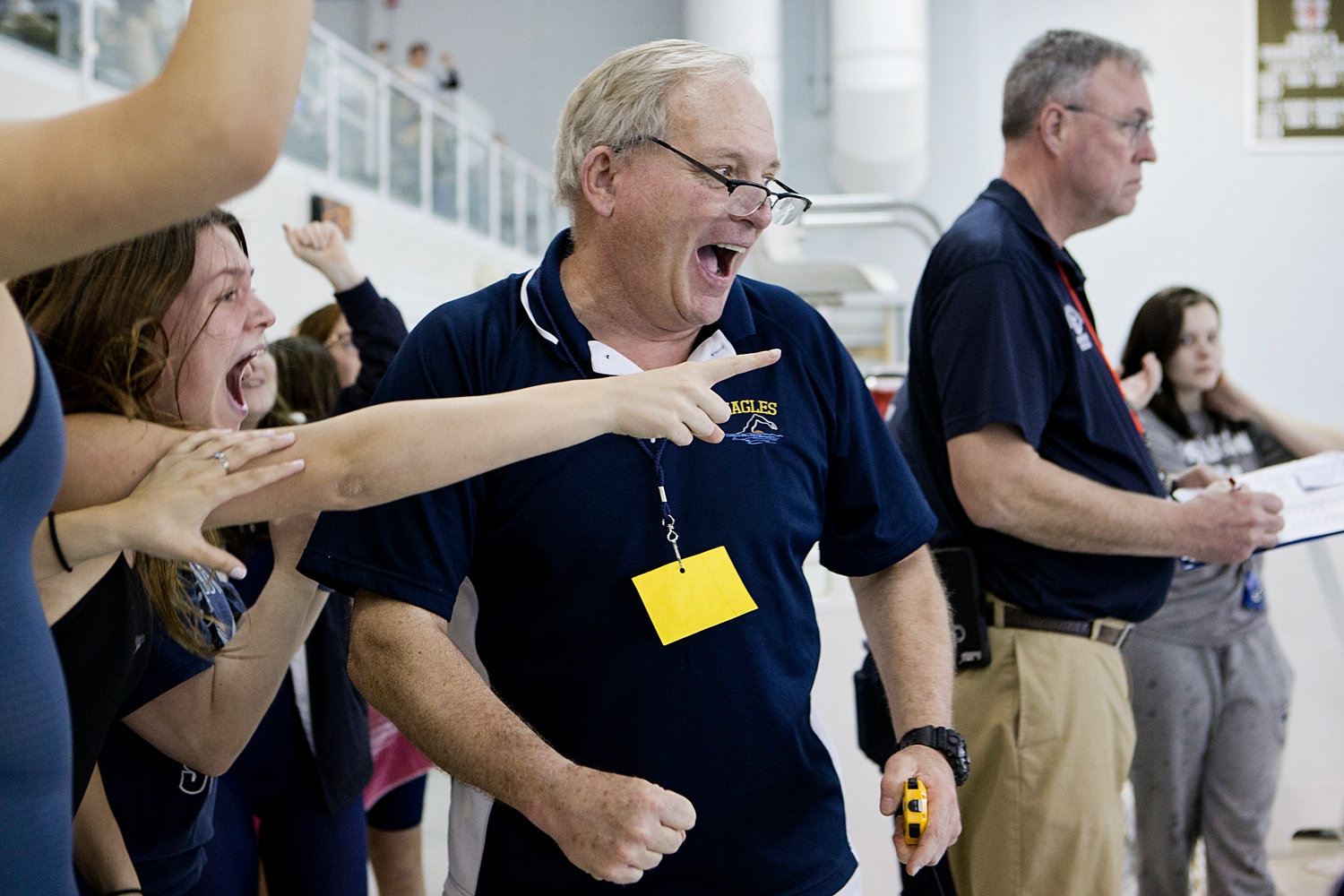 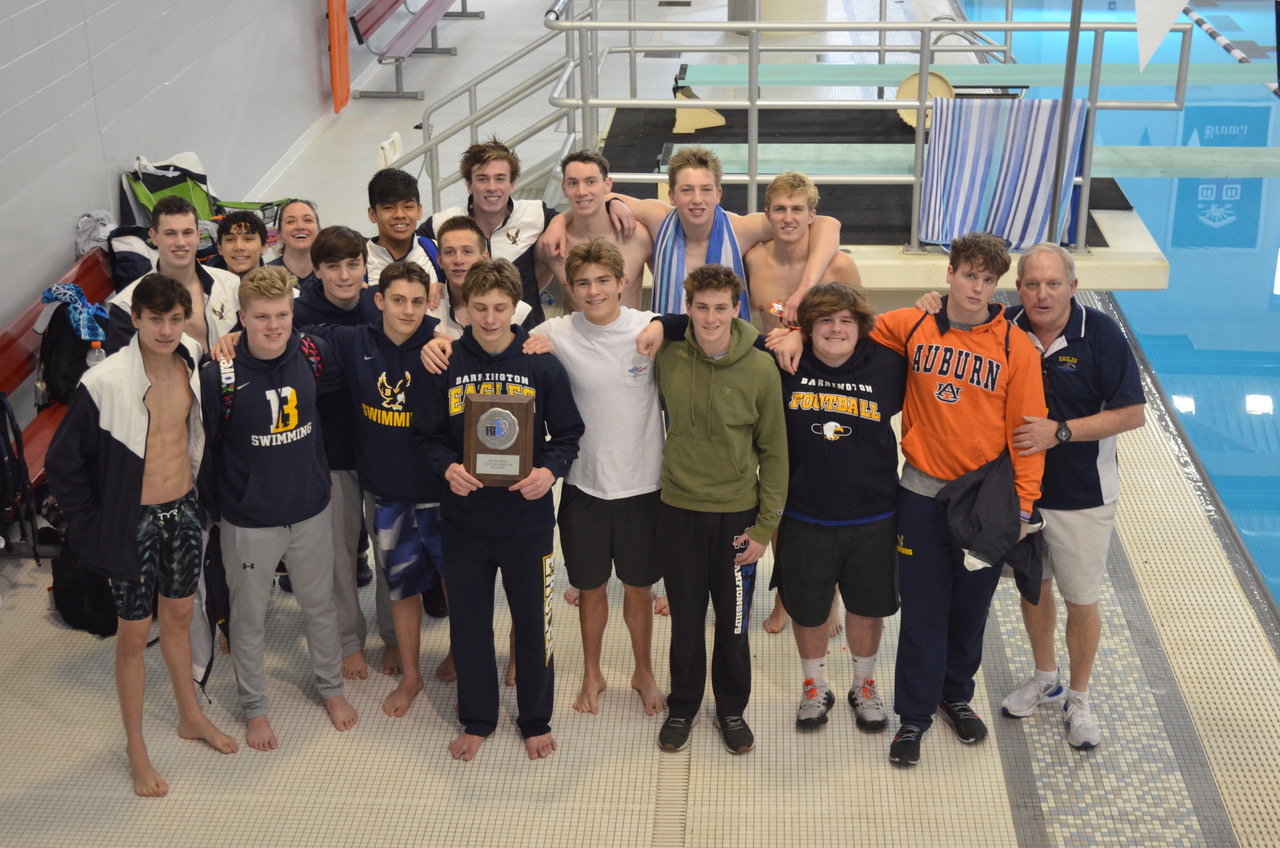 Members of the BHS boys team gather for a group photo following the state meet. 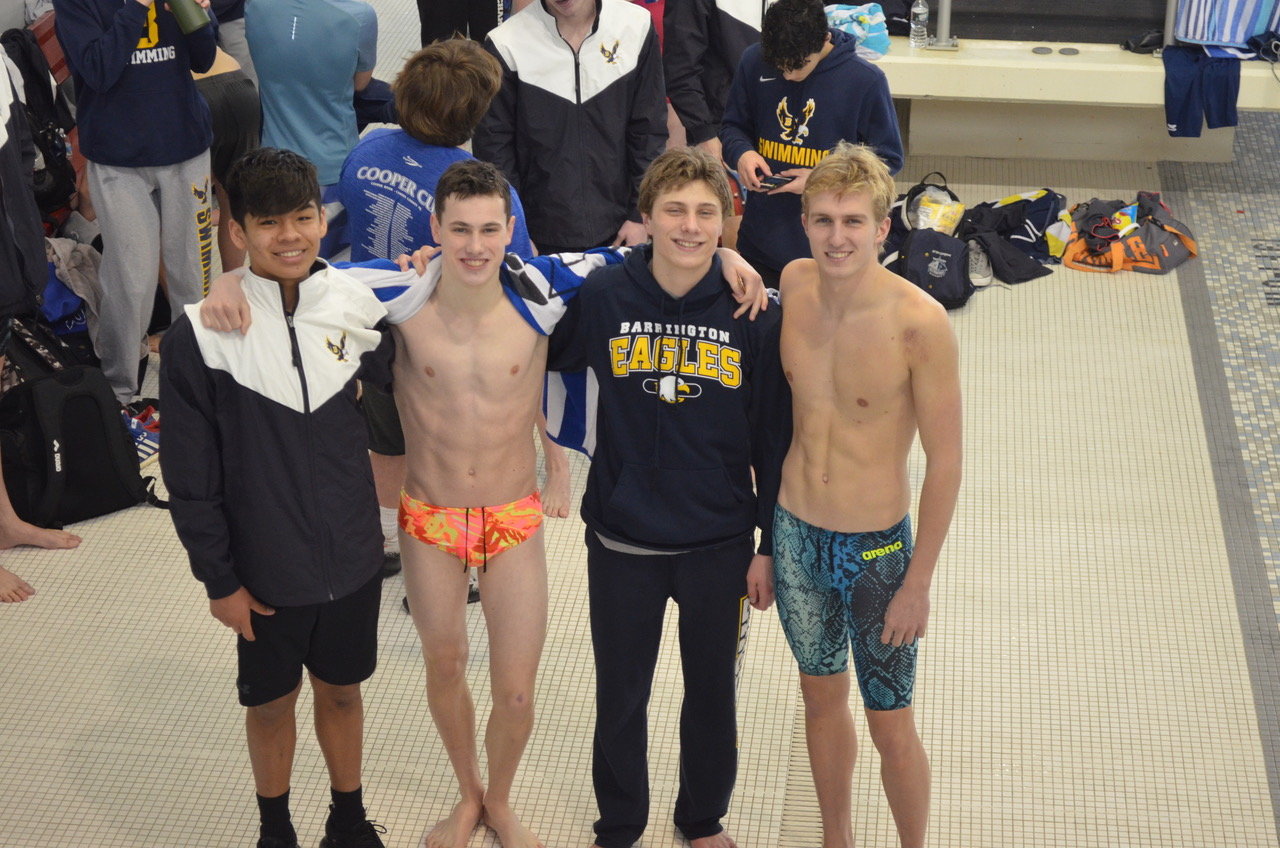 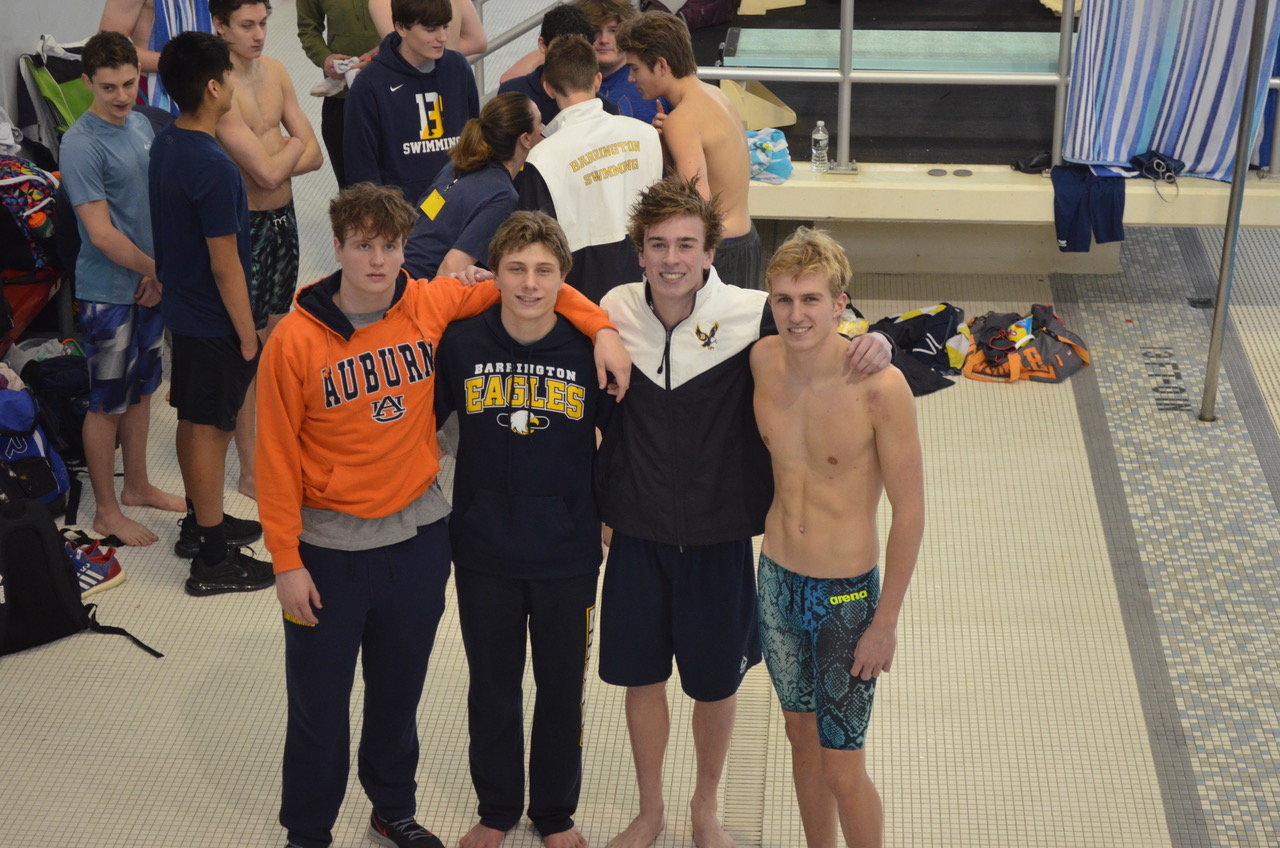 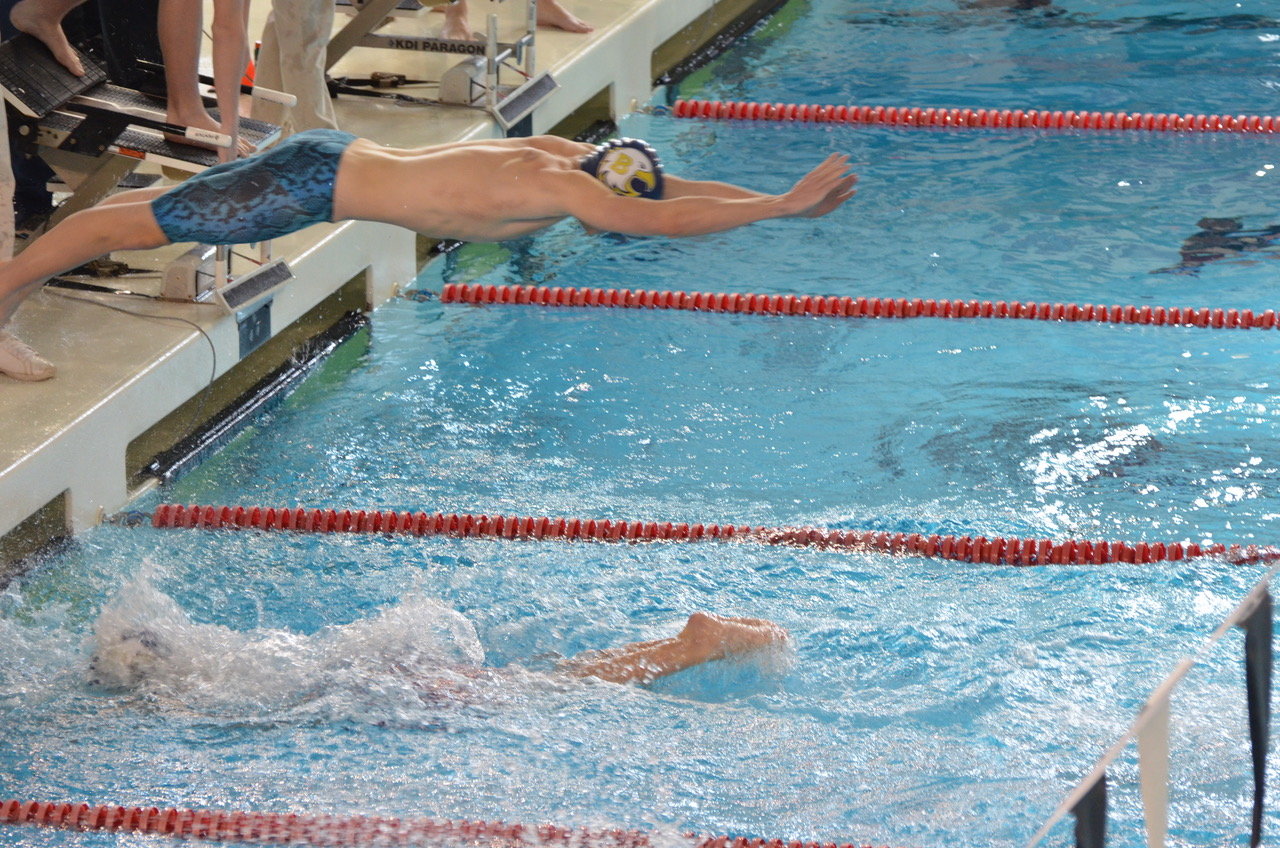 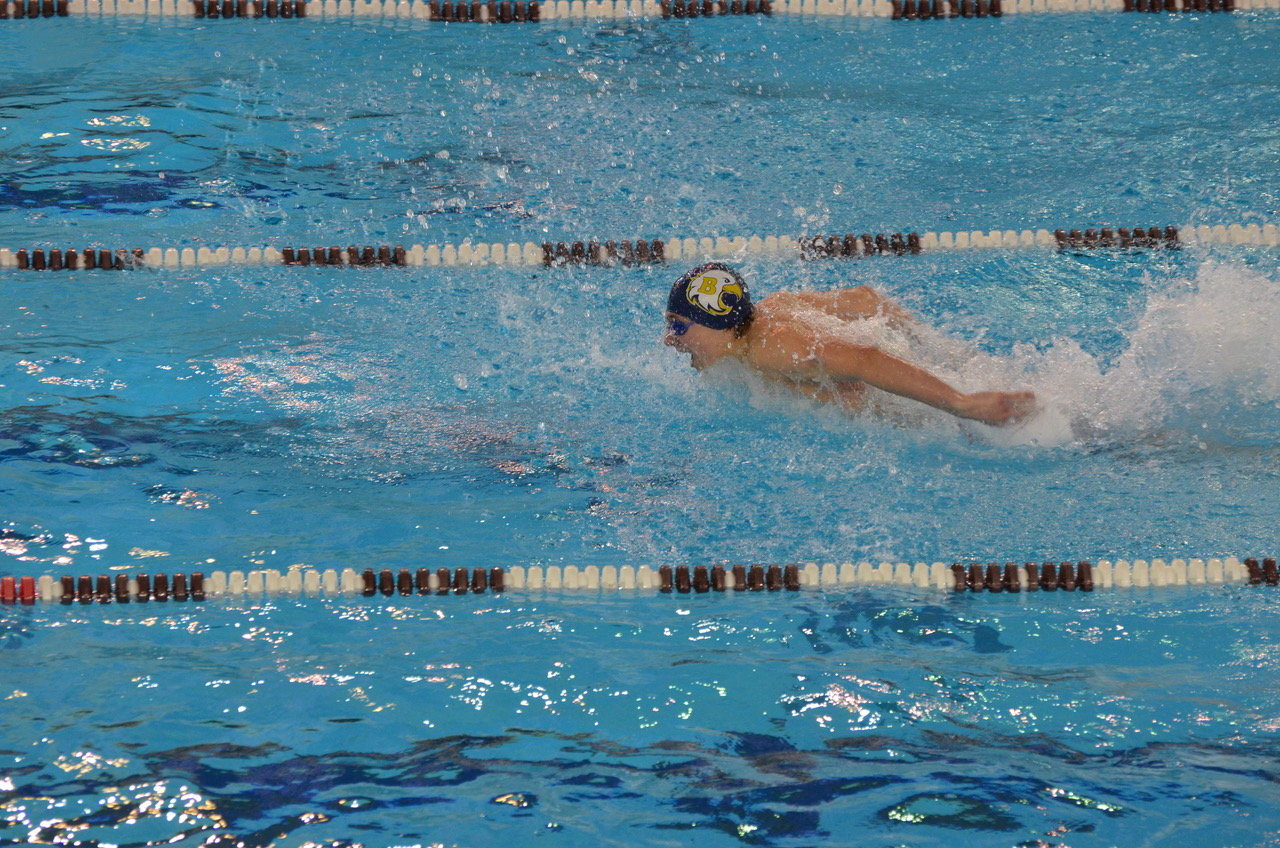 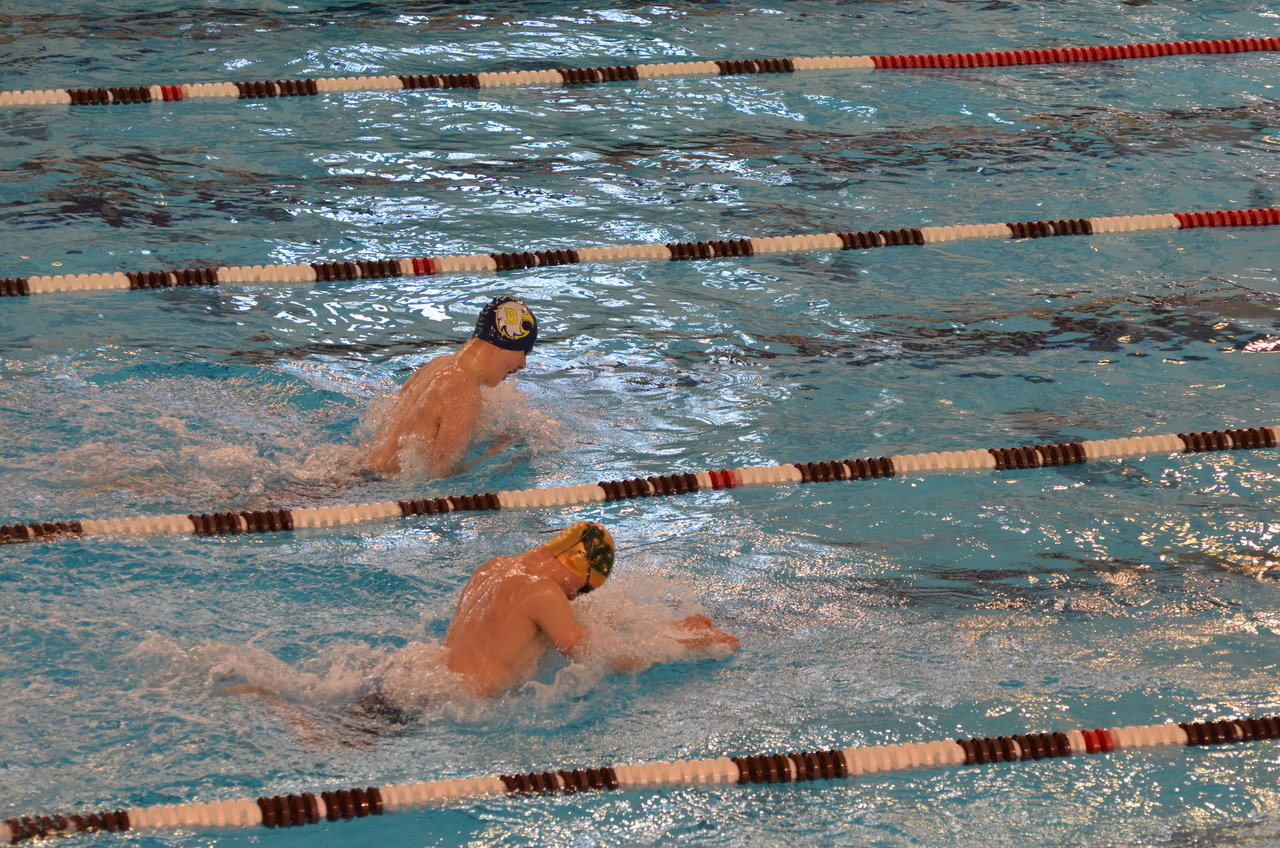 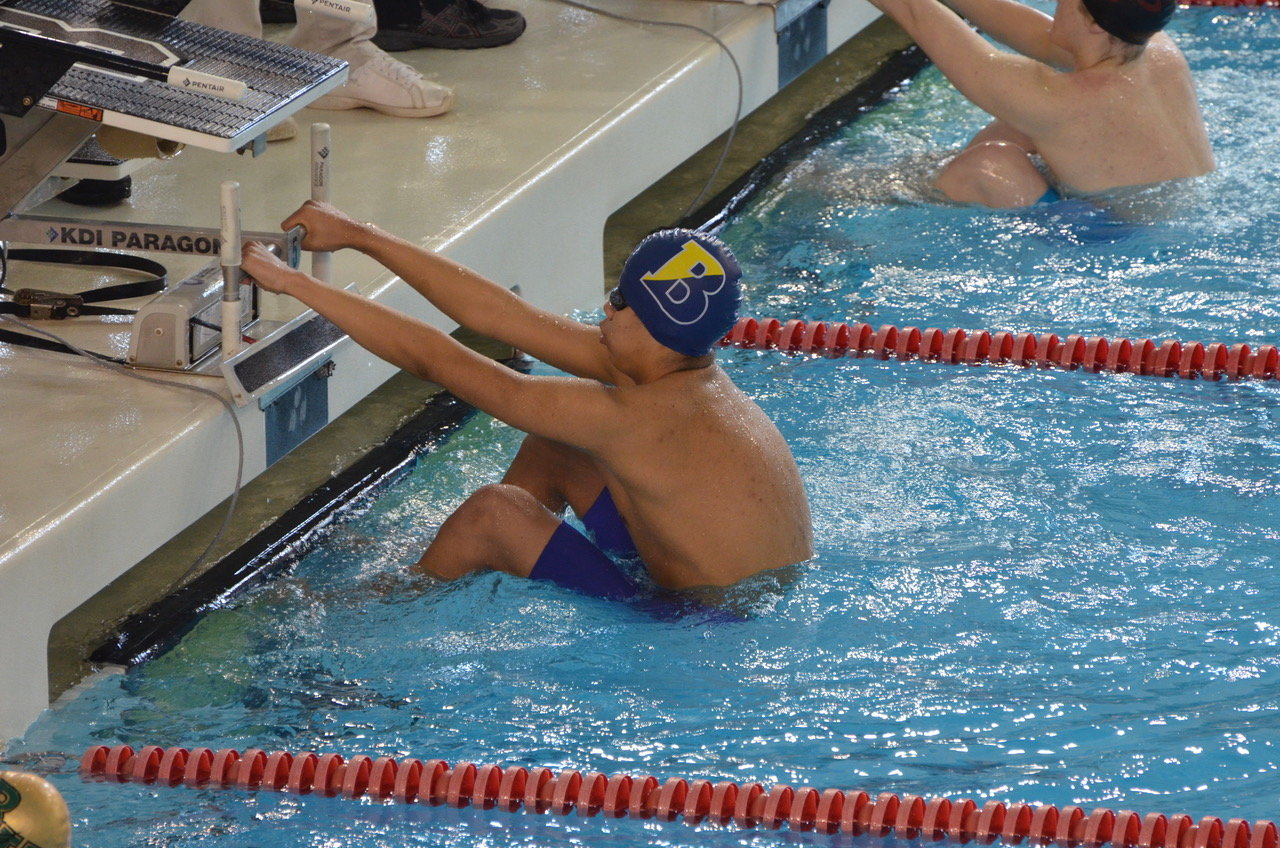 After tapering down his team's practices leading up to states, Coach Gorham waited for the tell-tale sign that his swimmers had recovered from the long season and were ready to compete at the season's biggest meet.

Early into the practice on Wednesday, Feb. 26, Coach Gorham had his answer: The boys and girls would not stop talking.

"The energy level at practice was so high," Coach Gorham said. "They were loud, they were silly. They were talking… I had to blow the whistle two or three times to get their attention. That's a good sign."

Coach Gorham said his swimmers were begging to do some sprints during practice on Wednesday, but he limited the workout and by Saturday was rewarded, as the Barrington High School girls swim team won its sixth straight state championship and the BHS boys team powered to an impressive second place finish behind Bishop Hendricken.

"Of all the groups I've coached, this group's worked so hard," Coach Gorham said.

Diehl also won the 100 freestyle with a time of 51.42, finishing nearly three seconds ahead of the rest of the field. Baker finished fourth in that event and Zoe Webster was fifth.

"Sydni, in my 50 years of coaching, is probably the most dominant swimmer I've even coached," Coach Gorham said, adding that she holds the state record in the 50 freestyle event and the second-fastest time in the state in the 100 freestyle. Coach Gorham said the only high school girls swimmer who clocked a faster time in that event is three-time Olympian Elizabeth Beisel.

Diehl partnered with DiGiacomo, Webster and Rachel Baker to win the 200 freestyle relay and set a new state record in the process. The Barrington girls clocked a 1:38.31, which was fast enough to break the old record, which was set by Baker, Diehl, DiGiacomo and Julia Zulker last February.

Barrington opened the meet with a strong showing in the 200 medley relay. Kristen Baker, DiGiacomo, and Amy Zhao, and Stone turned in an impressive performance, finishing second behind Bay View by just .5 seconds. Coach Gorham said the BHS relay team entered the finals as seventh seed.

"That pumped them (the team) up," said Coach Gorham. "After that they swam so well."

In the 100 butterfly, Stone led the way for the Eagles with a fourth place time of 59.41, while Zhao finished one spot back, the two Eagles separated by just half a second. Stone also swam well in the 100 backstroke, finishing with a third place time of 59.40.

Kristen Baker, a freshman, finished sixth in the 100 breaststroke event.

Coach Gorham credited all the team members for bringing home Barrington's sixth straight state championship. He said all the girls understand that it takes a team effort to win a title. Coach Gorham made special mention of the seniors, including Diehl, Zhao and Ellie Wind among others.

Bishop Hendricken may have won the state title, but the boys from Barrington felt like the champions following the state championship meet at Brown University on Saturday.

The Eagles set the tone from the very start of the meet, as a team of three Eagle freshmen — Lucas Jauregui, Max LaRoche and William McClelland — and one senior — Andrew Barton — powered past Hendricken and the rest of the field to win the 200 medley relay.

"The medley relay for the boys set the tone," said Coach Gorham. "They crushed Hendricken. From that point, I said 'Ride the waves boys.'"

And that's what the Eagles did. Barrington scored points in nearly every single event at the state meet and finished with 329 total points, second only to the Hawks' 426 and well ahead of Portsmouth and Moses Brown, which tied for third with 168 points.

In the 200 freestyle, Barrington's Kellan Lane finished in seventh place. John Eldeiry placed third in the 200 IM, and the Eagles placed three swimmers in the 50 freestyle. McClelland finished fifth, while Jackson Bennett was sixth and Barton was seventh.

Barrington finished second in the 200 free relay, as Luke Gorham, McClelland, Bennett and Barton clocked a time of 1:29.80. Lane, Bennett, Eldeiry and David McMillan teamed up to finish third in the 400 free relay.

Jauregui finished seventh in the 100 backstroke, and two Eagles placed in the 100 breaststroke — Eldeiry finished third and LaRoche was fourth.