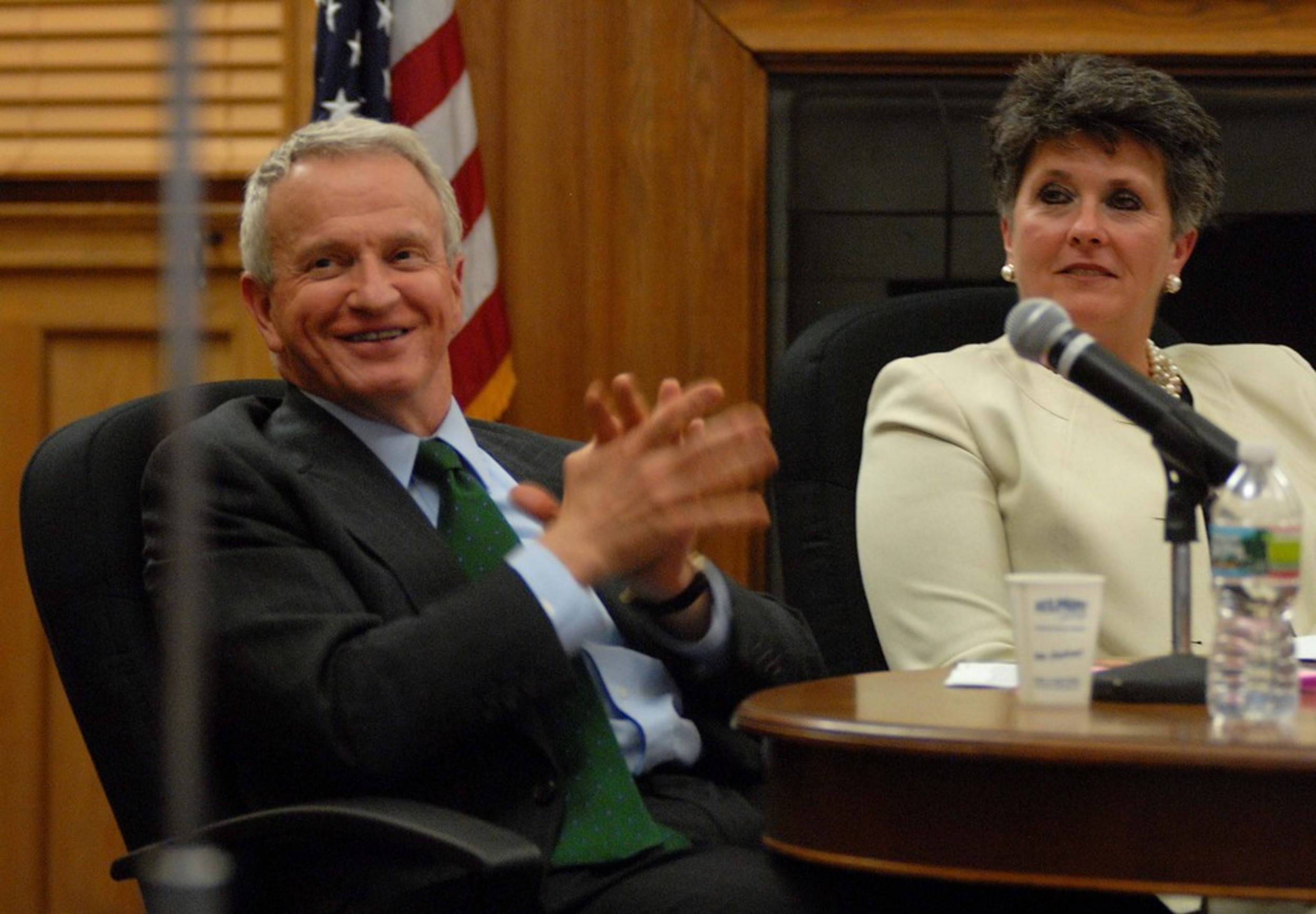 Kate Brody (right) is pictured at a school committee meeting with fellow board member Patrick Guida. Both voted in favor of a later start time at the high school and middle school.
Posted Thursday, January 7, 2016 11:17 pm
Josh Bickford

"For us, for me as a school committee member, when I look at the research, it would be negligent of me to ignore that data," said Ms. Brody.

In fact, all three school committee members who voted for the change referenced the recommendations of the American Academy of Pediatrics and the CDC for later start times at secondary schools. The change will reportedly cost the district an additional $400,000 per year for additional buses and accompanying costs. The high school currently starts at 7:40 a.m., while the middle school starts at 7:45.

Mr. Guida said he has not seen any information that challenges the study completed by the AAP.

"I'm persuaded that we need to be a leader in this state and move to a later start time," he said.

Anna Clancy and John Alessandro voted against Mr. Shea's motion to push back the start times. Ms. Clancy, who won a special election in December to earn a seat on the committee, said she was torn by the issue. She said she was not convinced that the school committee had researched all the possible implications of shifting from the current 7:40 a.m. start time at the high school to the 8:30 start.

"I don't think we've looked at all the factors," she said.

The vote followed more than four years of work on the issue, and another hour and a half of discussion on Thursday night. A number of people spoke out in favor of the later start time, including Barrington resident Michael Johnson.

"Just because we're good, doesn't mean we can't be better," he said referencing the district's strong reputation. "Let's make a change and let's not go half-way," adding that he urged the district to support the 8:30 start time and not the 8:15 proposal.

"The science is there. It's not a personal opinion. It's data," she said.

Other folks voiced their opposition, including the school committee's student representative, Katharine Odjakjian. Sitting beside other members of the school committee, Katharine said that the overwhelming majority of students and teachers at the high school opposed the later start time. She said student stress at that school is not caused by a lack of sleep, rather the lack of sleep is caused by too much stress.

"Look for the root of the problem," she said.

Other people echoed her statement. One woman with two children at the high school said her daughter was up late most nights doing homework … too much homework. She also questioned educators' decisions to assign homework over the Christmas vacation and other breaks.

"She was looking forward to a break, but they don't get a break," she said.

Barrington High School sophomore Jared Jageler attended the school committee meeting to gather information for a report on the high school's Sunrise Show. He wasn't planning to speak on the issue, but eventually decided to do so. He said he was up late doing homework most nights and asked the school committee why they did not ask students what they thought of the later start time.

"What we need is greater input from the kids," he said.

Members of the health and wellness committee shared their support for the change, while some teachers in the district, including veteran middle school educator Mary Roberts and high school teacher Nahum Mitnik, voiced opposition.

In the end, Mr. Shea made the motion to change to the 8:30 start time. Mr. Guida seconded the motion, and Ms. Brody joined those two for the 3-2 decision.