The Barrington Pop Warner 10U football team opened the fall season with a 20-6 win over Seekonk at Barrington High School’s Victory Field on Sunday.

The Eagles relied on a steady running … 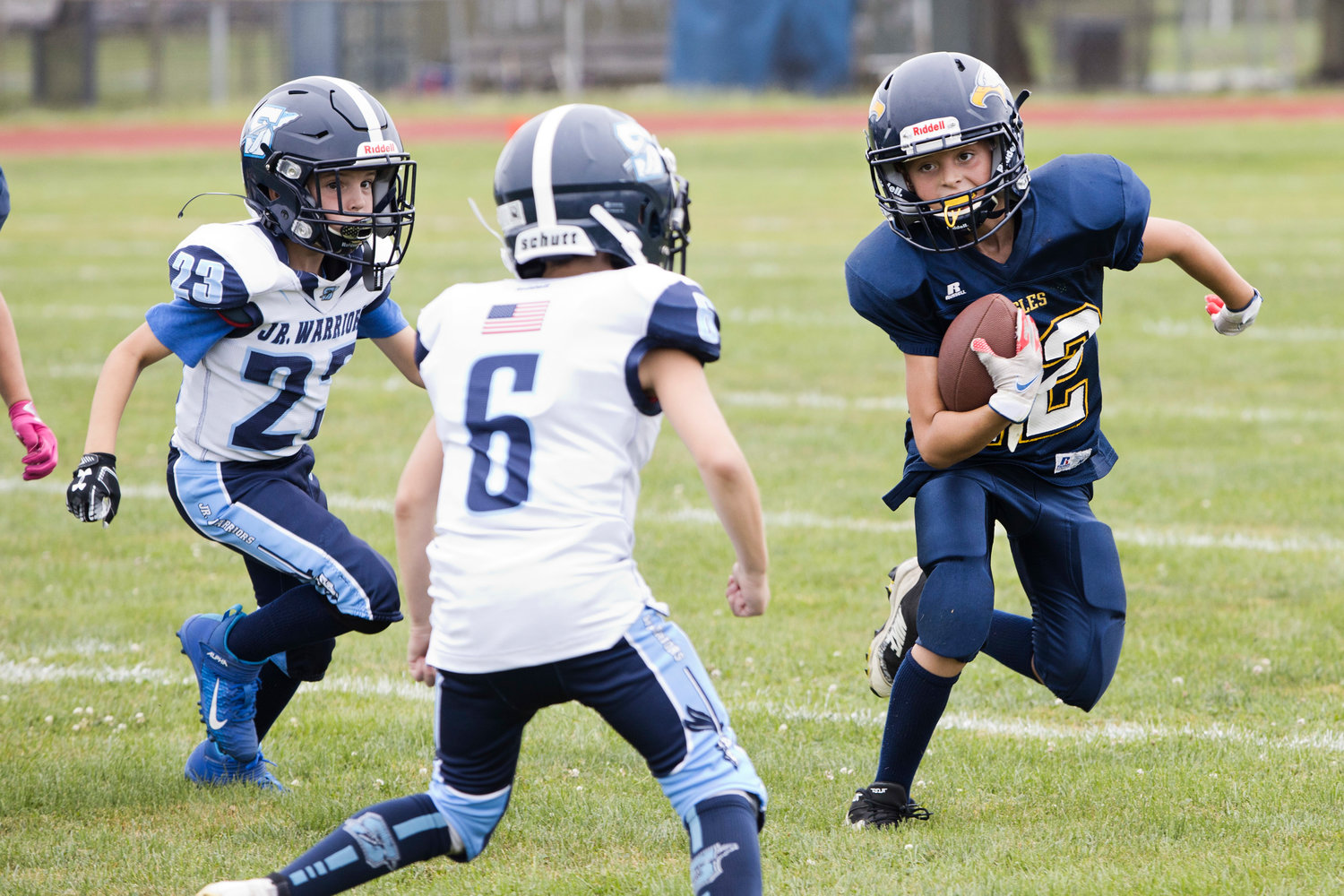 Barrington's Jack Leduc runs around the Seekonk defense while playing in Barrington's 10U home opener on Sunday.
Photo by Julie Furtado 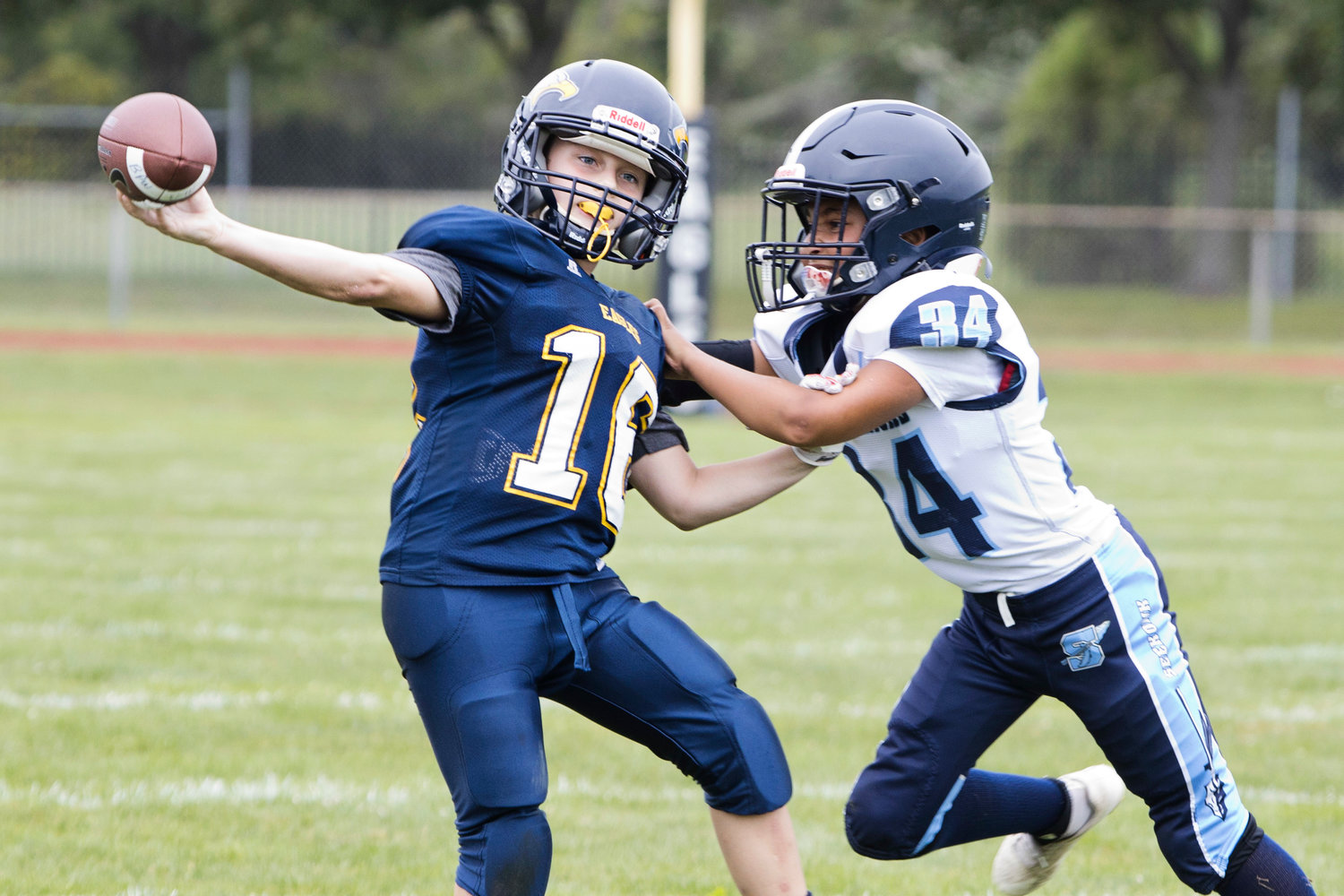 Barrington quarterback Adam Marszalek throws a pass while being pressured by a Seekonk defender on Sunday.
Photo by Julie Furtado 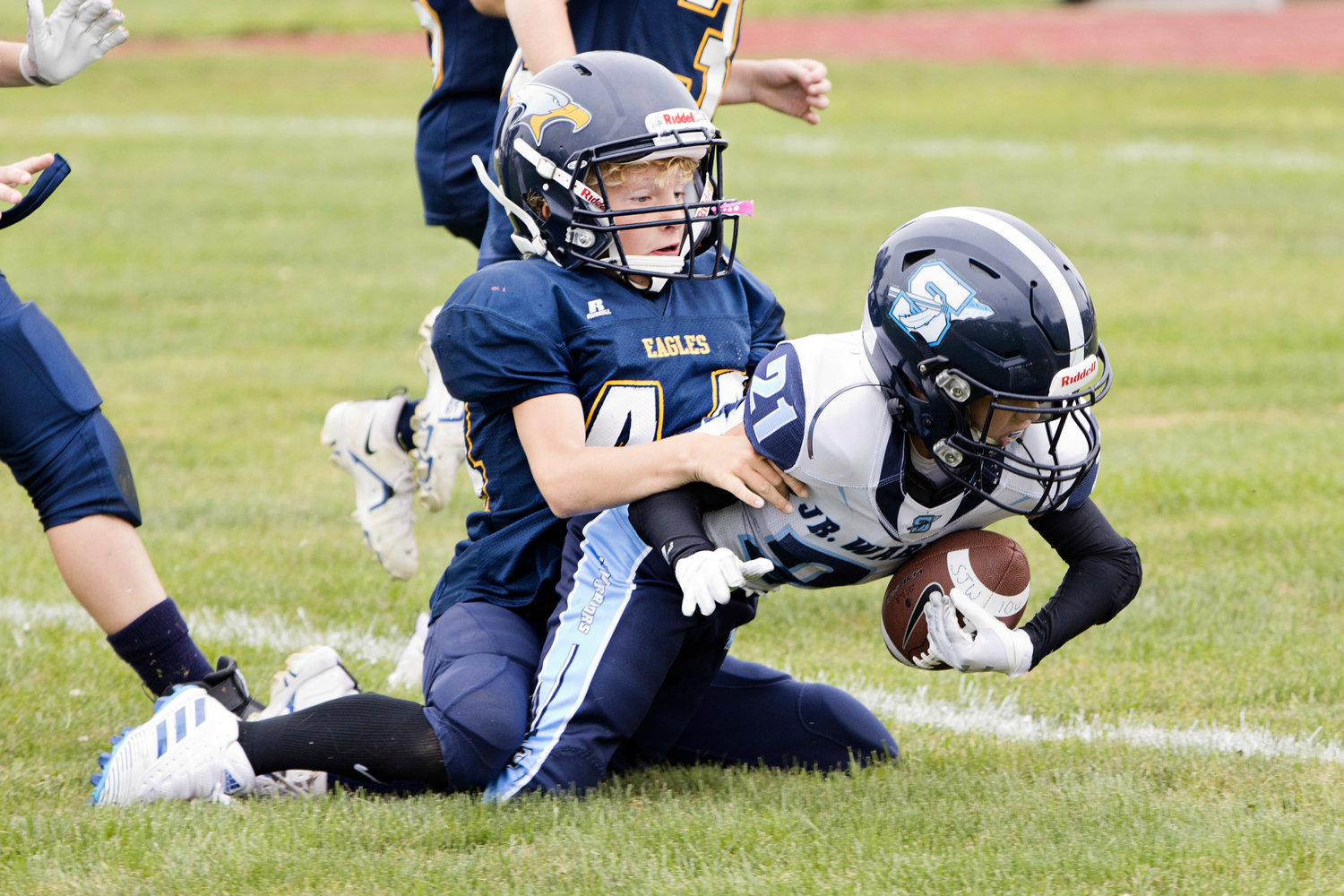 Brice Antonio takes down a Seekonk ballcarrier during Barrington's win on Sunday.
Photo by Julie Furtado 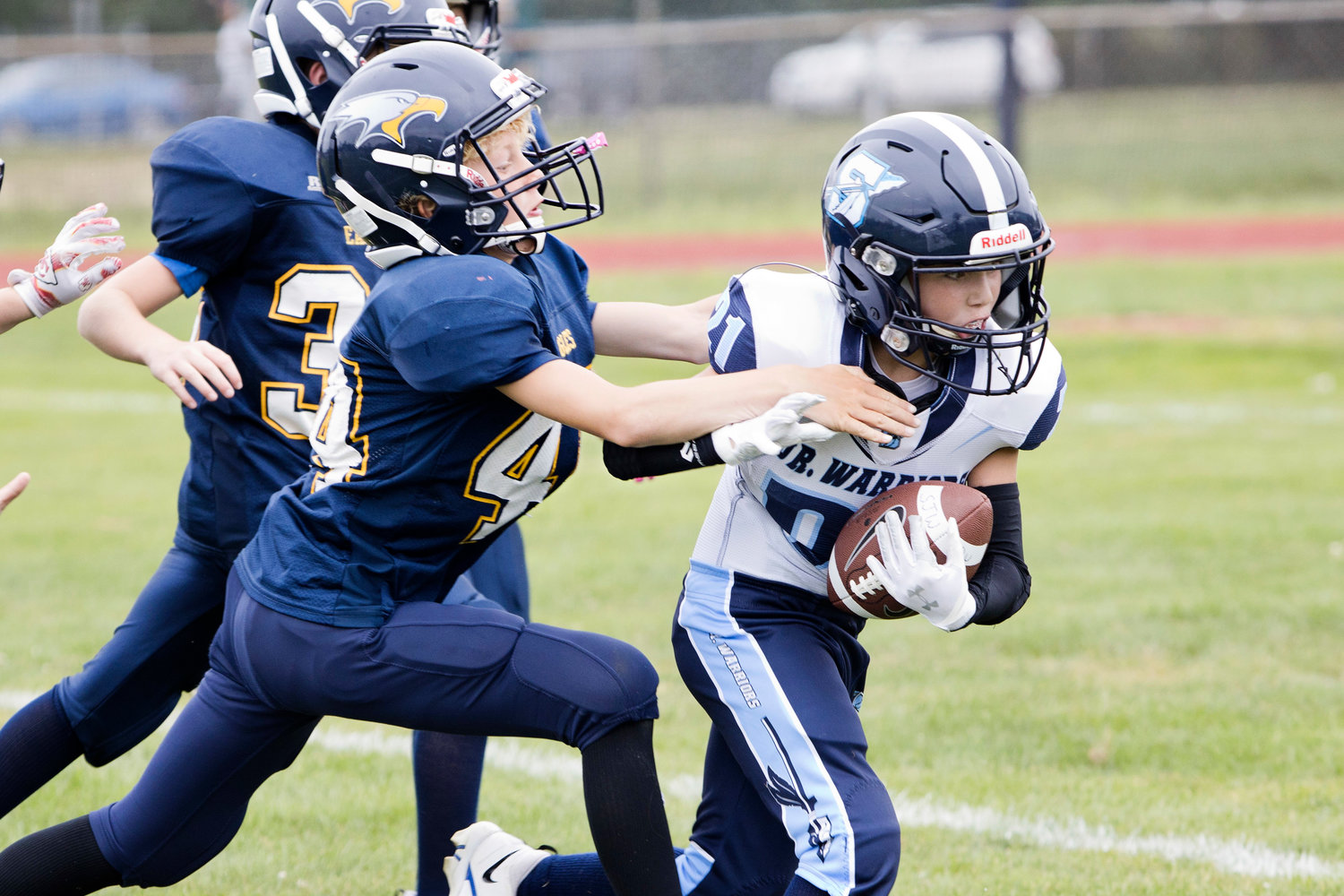 Barrington's Brice Antonio takes down a Seekonk opponent during the 10U home opener on Sunday.
Photo by Julie Furtado 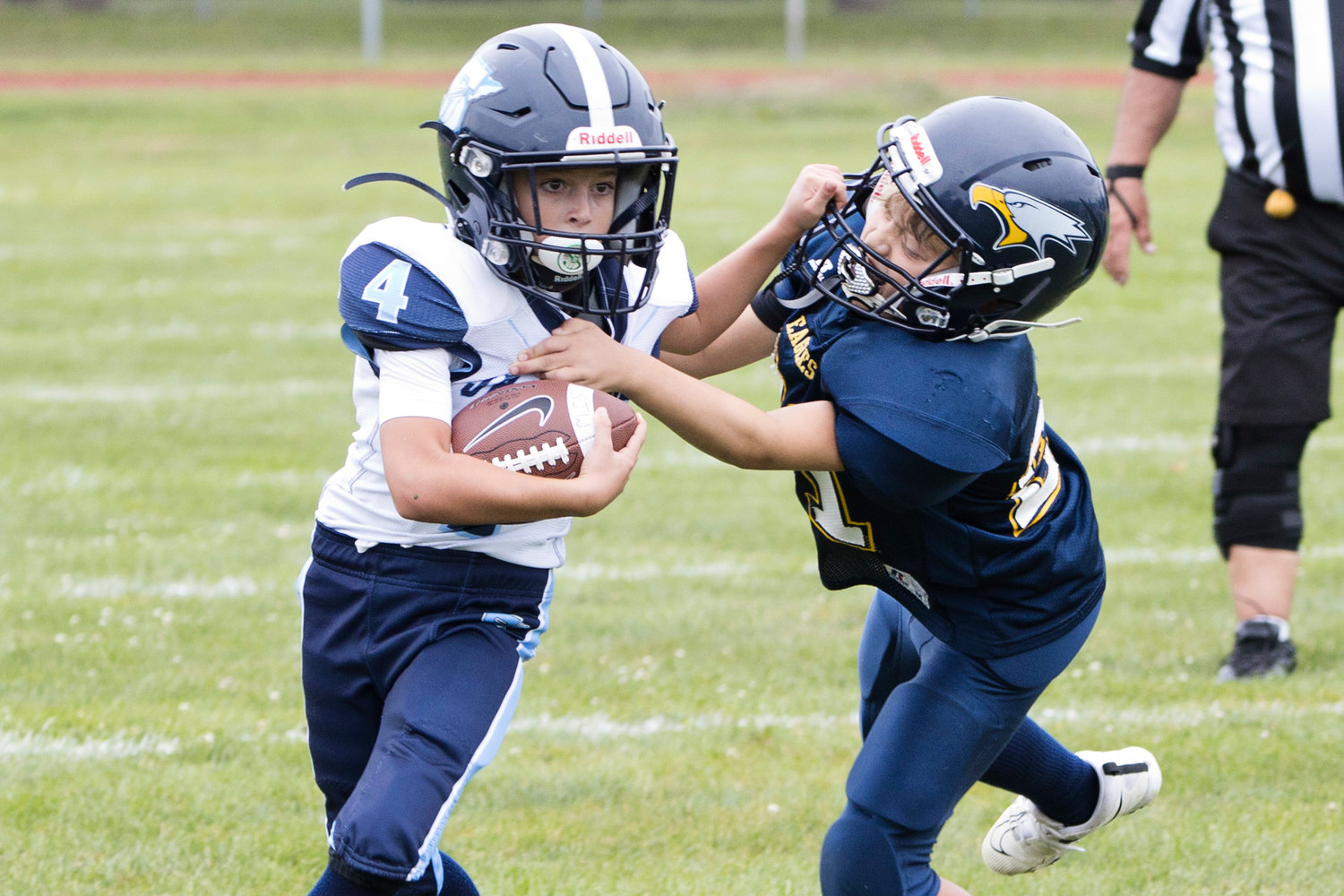 Barrington's Chase Gauthier attempts to stop a Seekonk ballcarrier from advancing during Sunday's 10U home opener.
Photo by Julie Furtado 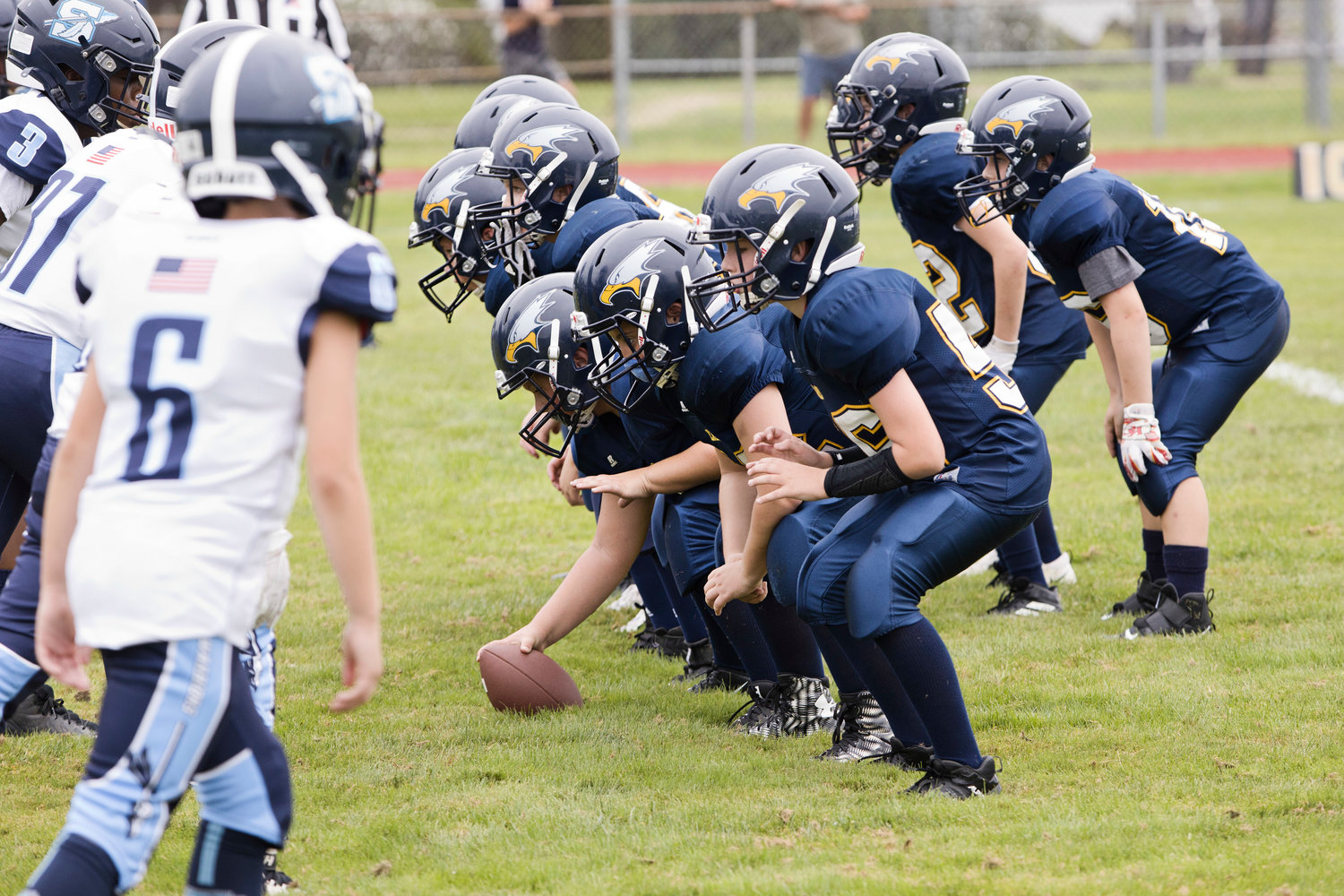 The Barrington 10U football team lines up for a play on Sunday.
Photo by Julie Furtado
Previous Next
Posted Monday, August 30, 2021 4:56 pm

The Barrington Pop Warner 10U football team opened the fall season with a 20-6 win over Seekonk at Barrington High School’s Victory Field on Sunday.

The Eagles relied on a steady running game to control the pace of the game. Numerous running backs took turns powering through the Seekonk defense. Jack Leduc opened the scoring for Barrington with a nice touchdown run around the left side in the first quarter. The extra-point conversion failed, leaving the score 6-0 Barrington.

Barrington’s defense was only on the field for a couple of plays on the next drive, as Leduc ripped the ball away from a Seekonk running back. A few plays later, the Eagles’ coaches called Leduc’s number again on fourth and goal and he blasted through the right side of the defense for a touchdown. Will Luttrell hauled in a pass in the end zone for the extra point, and Barrington built its lead to 13-0.

Seekonk scored before the half, cutting the lead to 13-6, but Barrington’s offense capped a nice drive in the fourth quarter with a rushing touchdown by Gavin Quinn. Levi Collins converted the extra point, catching a nice pass in the end zone.

Meanwhile, the Eagles’ defense played well throughout the game. Leduc finished with a number of tackles and twice stripped the ball away from Seekonk running backs. Quinn also made a handful of tackles, as Adam Marszalek from his safety position. Trey Paup finished the game with two tackles for a loss and one forced fumble.

Barrington coaches praised the work of the offensive line, which opened up holes for the ballcarriers throughout the game.

Following the 10U game, Barrington’s 12U team took the field against Seekonk. The Eagles played hard and trailed by a single score at halftime. The Warriors scored a few more times in the second half, and handed Barrington its first loss of the season.

Barrington’s 12U coaches praised the outstanding effort of Miles Dolan, Jordan Burns and Jacob Simon on the defensive side of the ball. Jake Donatelli, Burns, Simon and Hayden Farley also made key blocks for the Eagles. Quarterback Jackson Byron-Marszalek completed two passes for about 20 yards.

Barrington’s 12U coaches said they were proud of the effort their players gave.