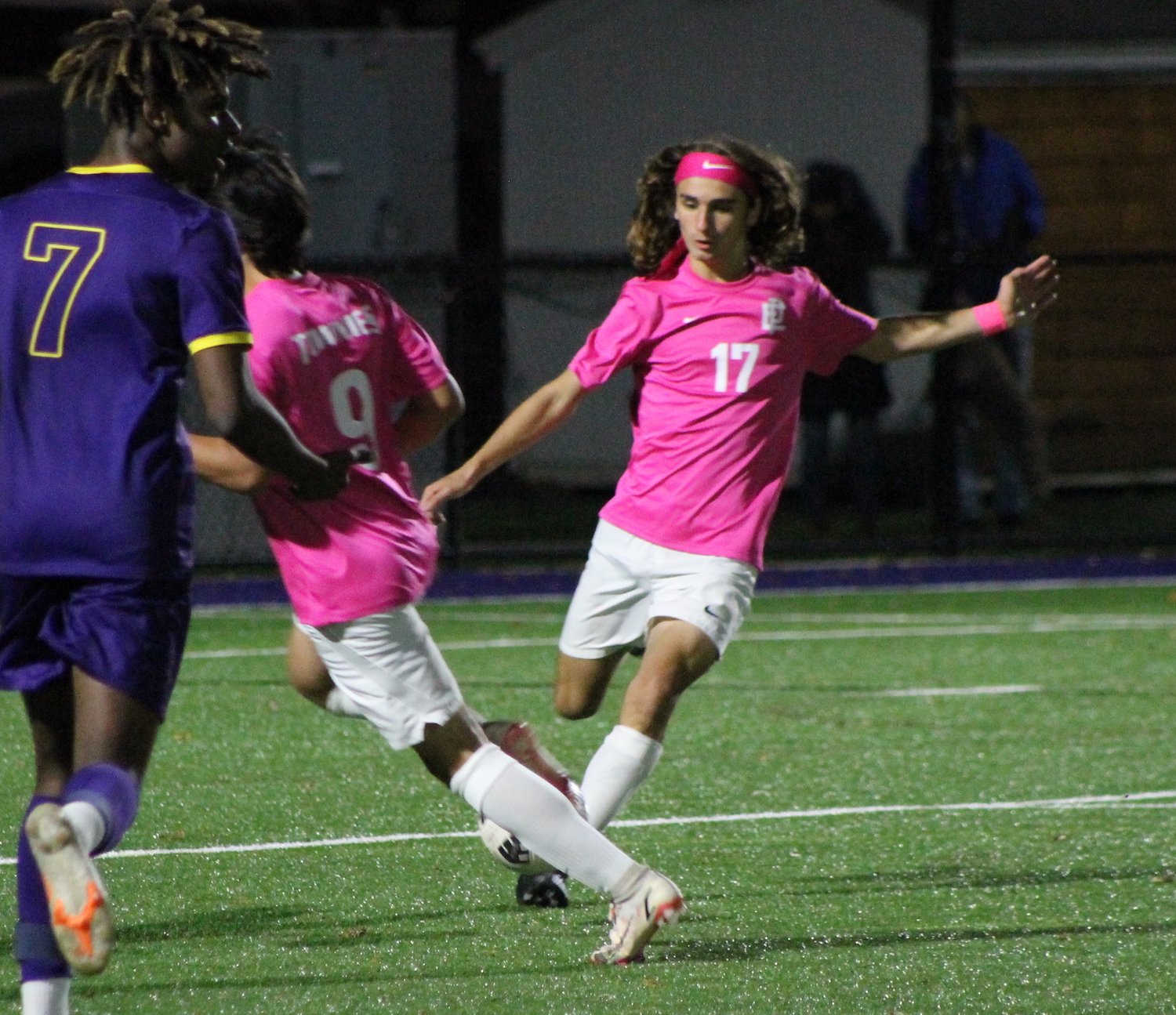 Soon to be junior center back Nathan Capelo is among some of the very talented members of the East Providence High School boys' soccer team that has needed to make a decision as to whether or not to continue playing at the Interscholastic League level or to join one of the Bayside Football Club teams making the jump into Major League Soccer's youth initial "MLS Next."
Posted Thursday, August 18, 2022 6:00 am
By Mike Rego

EAST PROVIDENCE — The biggest disruption to Rhode Island boys’ high school soccer in the near 60 years since its inception is happening this fall and is being driven in part by an entity with local ties.

Bayside FC, a founding member of MLS Next two years ago in the younger divisions, will field teams in the Under-19 and Under-16 age groups for the first time, which are obviously the high school years of burgeoning footballers.

Key to the upheaval for Interscholastic League players, unlike the structure Bayside FC was part of previously for those ages, MLS Next prohibits its athletes from participating in competing programs, meaning it’s an either/or decision for those involved with the organization.

“An opportunity presented itself for us to make the move,” Vieira, who will continue as the EPHS boys’ soccer head coach this fall at least, said of the decision by Bayside FC leaders to make the jump to MLS Next. Like Vieira, Andrade will continue as an assistant coach in the Providence College men’s soccer program.

“Rhode Island kids will have a chance, week-in and week-out, to be challenged at the highest level of the sport in these age groups,” Vieira continued. “Never in my wildest dreams did I think Bayside teams would ever compete against (MLS youth teams) NYCFC (New York City Football Club), (Washington) DC United or Toronto FC. But now, from a scouting standpoint, from a competitive standout point, from a training standpoint, if you have a kid who is committed, who wants their life to be about soccer and playing at that level, this is going to be their best opportunity going forward.”

MLS Next is a 10-month a year endeavor for all involved. Clubs only take off the months of July and August. Teams play a 20-plus game regular season schedule and participate in other tournaments.

Bayside joins several elite-level club teams from around New England, such as the Boston Bolts, in taking up the offer to join MLS Next’s growing U-16 and U-19 Northeast Regional groupings with the likes of the aforementioned franchises as well as the New England Revolution, New York Red Bulls and Montreal FC.

To be a factor in those age divisions, Bayside will attempt to entice the best players in Rhode Island and other near-by towns to join up. Vieira, in fact, has poached four existing EPHS players to make the move. A fifth potential Townie, incoming freshman Julian Monteiro, was already a member of the Revs’ youth academy and recently earned a spot on New England’s U-16 MLS Next team.

“The choice we had was pretty simple. If we wanted to remain competitive with the other top clubs in the region we had go with them or lose the opportunity. We would have become a second-tier organization. As a club, a business venture, we had to do it to remain viable,” Vieira said.

On the flip side, as Vieira readily admits, there’s no sugar coating the situation for high school soccer at the top levels around New England and especially in a state the size of Rhode Island. If a dozen or two dozen of its best players leave for Bayside or other MLS Next programs, then the quality of play and the opportunity for some athletes to advance their careers are likely to be diluted eventually, if not immediately.

“Without a doubt most of the better kids are going to start taking this route,” said Vieira. “If you want to play high level soccer, it’s not the only way to do it. The traditional way of going to high school and college will still be available and some will still make it. But if you want to play for the best college teams or possibly be a pro, the vast majority of players going forward are going to go through MLS Next.”

With all that being written, Vieira has an EPHS team to coach this fall and the Townies can officially begin tryouts and practice for the upcoming 2022 season on Monday, Aug. 22. For the first week boys’ soccer will workout each evening at Townie Stadium on the EPHS campus from 7-9 p.m. For more information email Vieira at tvieira@epschoolsri.com.

It should be noted all students hoping to participate in fall sports at EPHS must have an up to date physical and be registered on Family ID in order to participate. Athletes new to sports also need to submit a notarized Assumption of Risk Form available at the EPHS athletics website http://eastprovidencehs.rschoolteams.com.

Preparations for the upcoming football season are well advanced, the Townies under the direction of third-year head coach Jon Stringfellow having officially started their practice earlier this week on August 15. Stringfellow can be reached at jstringfellow@epschoolsri.com.

Like boys’ soccer, the rest of the EPHS 2022 fall sports teams formally begin training for the new season on Monday, Aug. 22.

The remaining coaches and contact information for each fall team are as follows:

The Martin Middle School boys’ soccer head coach is the last position still needed to be filled for the upcoming 2022 season, which runs from August 28 to October 28.

Qualified applicants interested in the job, which comes with a $2,800 stipend, can contact District Athletic Director Gregg Amore via email gamore@epschoolsri.com or by calling 401-339-9378.

Coaches of the Year

Clearing out some last few notes from the 2022 spring season, two EPHS instructors were selected as their respective league coaches of the year: Haley McCusker and Dan Cabral.

A year ago in the pandemic-abbreviated Division III regular season the Townies could muster only two wins in 11 games under then first-year girls' lacrosse head coach McCusker.

This spring, however, East Providence authored one of the most dramatic turnarounds in the sports’ brief history both at the school and in the state as the Townies claimed the D-III championship with a 12-11 defeat of North Smithfield in the league title game played, June 5, at Cranston Stadium.

McCusker was chosen as the D-III Coach of the Year for leading the Townies to their first ever title in the 15-year history of the program and in making just their second ever championship game appearance. The locals lost 15-10 to South Kingstown in the D-III final back in 2010.

East Providence’s best-ever spring came to a close with a 15-1 overall record.

Though coming up a bit shy of equaling their girls’ lacrosse counterparts, Cabral and the EPHS boys’ volleyball team nonetheless completed a superb rebound campaign themselves in 2022.

The Townies finished their Division II regular season with a 15-3 record and earned the second seed in the league playoffs. Unfortunately for the locals, they fell to third-seeded Westerly in the semifinals.

Still, EPHS was coming off only a 4-7 record during a truncated 2021 season shortened due to the then still lingering affects of COVID-19 and after the 2020 season was cancelled outright at the onset of the pandemic.

The last full regular season EPHS and Cabral completed prior to this spring was in 2019 when the Townies slumped to a 1-17 record while playing in Division I and obviously missed the league playoffs.

Ask the candidates: What's at the top of your agenda?