Bristol has entered into a lease agreement to place 16,000 solar panels on the old landfill

What to do with an old landfill? You can’t sell or develop the property; you can’t build homes or plant corn. For David Milner, Bristol resident and CEO and founder of Warren-based NuGen …

Bristol has entered into a lease agreement to place 16,000 solar panels on the old landfill 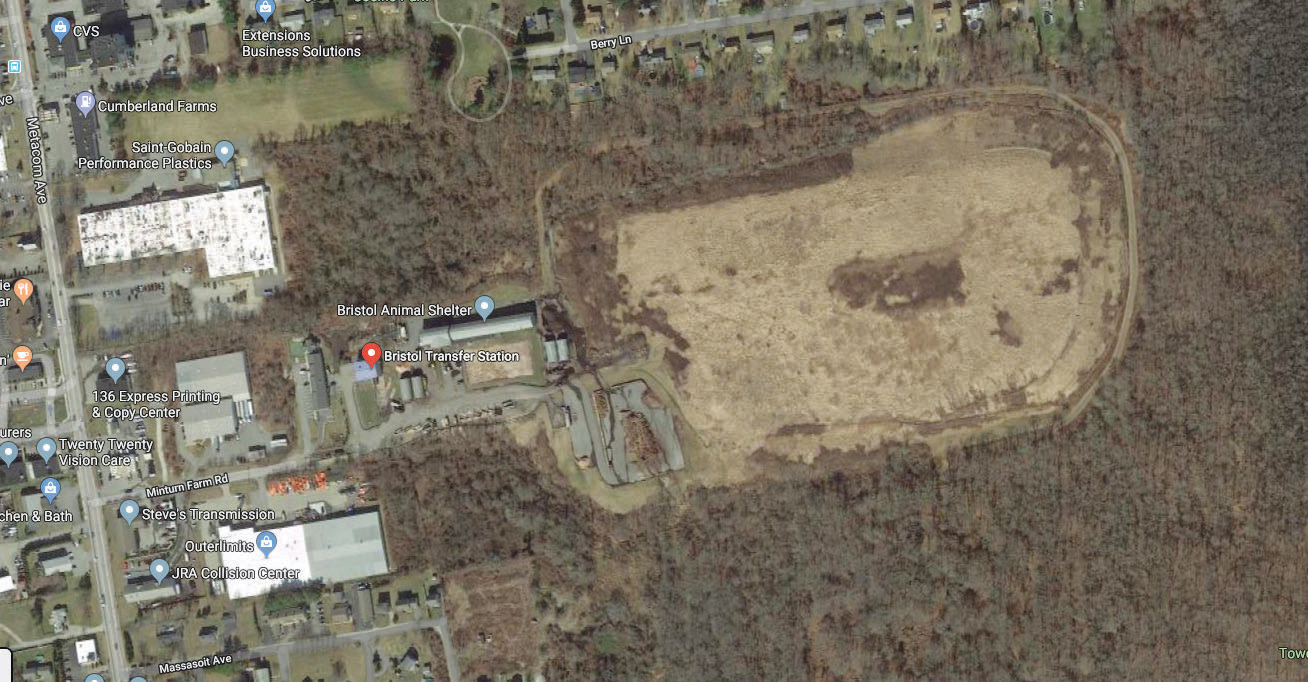 This aerial image from Google Earth shows the Bristol Transfer Station off Minuturn Farm Road, with the large, capped landfill area to the east. This site between Berry Lane and Tower Road would be home to 16,000 solar panels under an agreement the town.
Posted Thursday, December 5, 2019 8:00 am
By Christy Nadalin

What to do with an old landfill? You can’t sell or develop the property; you can’t build homes or plant corn. For David Milner, Bristol resident and CEO and founder of Warren-based NuGen Capital, a capped landfill is the perfect location for a solar array. He recently signed a lease agreement to install 16,000 solar panels on the Bristol landfill east of Minturn Farm Road.

NuGen builds, operates and maintains large solar arrays, primarily in the northeast. They site their projects on land that is not much good for anything else.

Their first project was a big one — a massive, 1,000,000-square-foot roof in New Jersey, on a building that currently houses an Amazon fulfillment center. Another more local rooftop project is currently being sited on the 800,000-square-foot roof of the former Stanley Bostich facility in East Greenwich. “If it’s not the largest single roof in Rhode Island, it’s close,” said Mr. Milner.

Back on the ground, the company has built arrays on sites from 100 to 600 acres, including an old gravel pit in Massachusetts with some 60,000 panels.

“One of the things that gets debated is where it’s appropriate to site these facilities,” said Mr. Milner. “On top of a closed landfill, you can’t do much else with the land. It’s a perfect location.”

There doesn’t seem to be much of a downside for the town, which will be renting the land to NuGen for $125,000 per year, with no associated costs.

Mr. Milner hopes having a large solar array in town could provide some interesting opportunities for collaborating with the schools. He’s already reached out to Superintendent Jonathan Brice to discuss the possibility of developing curriculum and programming around the facility. “There are a lot of subjects you can tie in to solar: math, science, sustainability, industry exposure,” said Mr. Milner. “There’s so much you can do on site, it makes learning real.

“Because solar is so new, there’s nothing incorporated into the curriculum so schools and teachers have to want to develop it, but the opportunity exists and we’re already having conversations about it.”

At present, National Grid is in the design phase for connecting the site to the grid, and NuGen is working on the environmental permitting, which will likely take another 60 to 90 days. Given the challenges of building in winter, the company will probably hold off until spring, go through a bid process, and break ground in April.

The array is projected to generate about 7 million kilowatt hours annually, which is enough to power about 675 average American households (with an annual consumption of about 10,400 kilowatt hours.)

“It’s a lot of power,” said Mr. Milner. Though every state has different rules, Rhode Island regulations prohibit selling to private or for-profit enterprises. NuGen will be free to sell the energy produced at the Bristol site to non-profits and municipalities. They have not yet sold it all, and are currently in negotiations with potential buyers.

“Solar is such a win-win-win, in the right, solar-appropriate site,” said Mr. Milner.