John Kinsella’s great baseball novel, “Field of Dreams,” popularized the phrase “Go the distance.” I regard it also as an exhortation to runners — from the mile to … 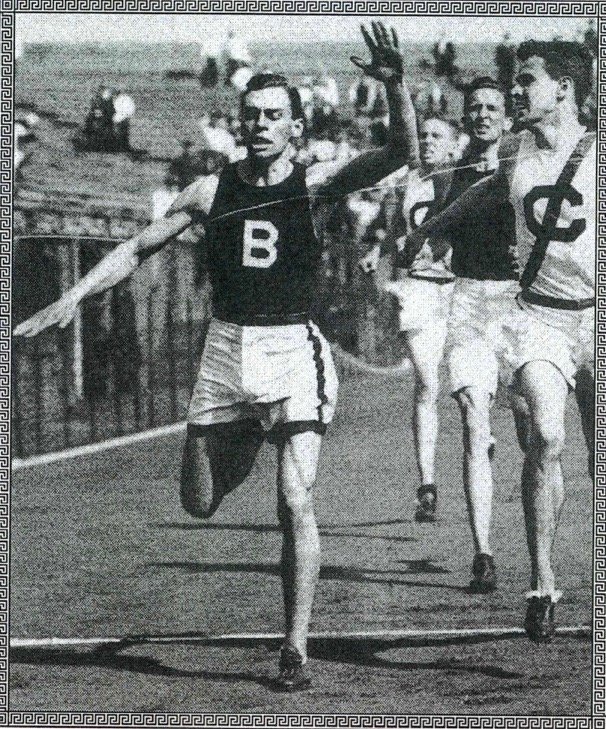 John Kinsella’s great baseball novel, “Field of Dreams,” popularized the phrase “Go the distance.” I regard it also as an exhortation to runners — from the mile to the marathon.

With the Tokyo Olympics recently in the spotlight, it is fitting to fix the beam on an early and overlooked Rhode Island-born Olympian who went the distance faster than anyone in his era of competition. That athlete, a Providence native, who starred first at Providence’s Hope High School and then at Brown University, was Norman Stephen Taber.

In 1968 when the newly-created Rhode Island Heritage Hall of Fame held an induction of Rhode Island Olympic medalists, its then sports-minded directors ignored Taber. Not until 2004, when I scheduled a second Olympic induction to coincide with the Athens Games, did Taber get his due.

I found it astonishing that he had been by-passed thirty-six years earlier despite his achievements.

At the 1912 Stockholm Olympics Taber won a gold medal in the 3,000-meter team relay and bronze in the 1,500-meter run. He is a leading candidate for the title of Rhode Island’s greatest home-grown track star.

In addition to his exploits at Brown and the Olympics, Taber is best remembered as the world record holder in the mile run. In 1915, paced by quarter-milers at Harvard Stadium, Taber broke the world mile record (established in 1886) with a clocking of 4:12.6 — a standard that stood until 1923 when the great Paavo Nurmi (“The Flying Finn”) ran the distance in 4:10.4.

After graduation from Brown in 1913, Taber became a Rhodes Scholar, an investment banker, and a financial consultant. At the time of his death from brain cancer in 1952 at the age of sixty-one, he was executive director of the United State Council of the International Chamber of Commerce.

Since the days of Taber and Nurmi, the mile record time has been repeatedly lowered.  Today it stands at 3:43.13, run by Hicham El Guerrouj of Morocco. Even the Rhode Island high school record leaves Taber in the dust. On June 13, 2009, Andrew Springer of my alma mater, LaSalle Academy, posted a time of 4:02.7.

Many developments explain that progression. Taber ran on a rough, unstable cinder track, whereas modern running surfaces are made of smooth synthetic rubber bound with latex or polyurethane installed to a depth of ½ inch on an asphalt or concrete base to ensure stability and more spring in the stride. Technology has resulted in well-honed, carbon plated spikes, the ringlet, a one-piece tight uniform that decreases wind resistance, and lighter, cushion-soled shoes.

Of even greater importance are the vast improvements in conditioning, nutrition, and training, and, especially, dedication and focus. The casual approach to track and field, as beautifully depicted in the 1924 Olympics by the movie “Chariots of Fire,” is a thing of the past. Running has been transformed from an intermittent, pleasurable pastime to an all-consuming passion.

It is said (mainly by coaches) that sports competition teaches us life’s lessons. Using that premise, let us compare those vast improvements in the mile run over the past century to the commendable improvements by Americans in their views and actions toward race and gender.

Some presentistic accounts of American history condemn Washington, Jefferson, and Madison for slaveholding, while ignoring the fact that in their time slavery was global and an accepted practice by humans, whether in America, Africa, or Asia. These Founders were born and raised in the slave-ridden culture of Virginia from which they could not escape.

Northerners such as John Adams, Ben Franklin and Alexander Hamilton are denounced for their belief that women should not be part of the political system. Adams, who deeply loved, admired, and took counsel from his amazing wife, Abigail, declared in a 1776 letter that women should be excluded “because their delicacy renders them unfit for practice and experience in the great business of life, and the hardy enterprises of war, as well as the arduous cares of state.”

If we choose to denounce these Founders for being people of their time, we should also scold George Washington for not taking a plane from Mount Vernon to the original capital, New York City, to avoid being nearly two months late for his 1789 inauguration.

We should tactically critique Andrew Jackson’s decisive victory in the 1815 Battle of New Orleans because he did not call for air strikes against the advancing British troops. We should critique Abraham Lincoln for failing to televise his 1863 Gettysburg Address so as to soothe a war-weary nation — and FDR for only using radio to transmit his inspiring Fireside Chats.

Such ridiculous criticisms are no more absurd than the claims of those hysterical (not historical) ideological manipulators of our country’s past who hold our Founders to the evolving standards of the present on such key issues as race and gender.

As my brief history of the mile run indicates, times change. Before diminishing Norman Taber’s long-standing world record and our Founders’ even longer-standing creation of the United States, know the conditions and circumstances under which they labored and understand the world in which they lived. To judge their feats (and shortcomings) by modern standards constitutes presentism — the great historical fallacy.

Letter: Once monastery is gone, the town will be forever changed

Letter: Vote ‘NO’ to the demolition of the monastery

Letter: Give us porta-potties, trash cans and bleachers in Barrington, please