Digging a healthier marsh in Tiverton

Rising seawaters that are encroaching into Seapowet Marsh are threatening habitat destruction in “one of the largest marshes in Narragansett Bay,” says Wenley Ferguson of Save The …

Digging a healthier marsh in Tiverton 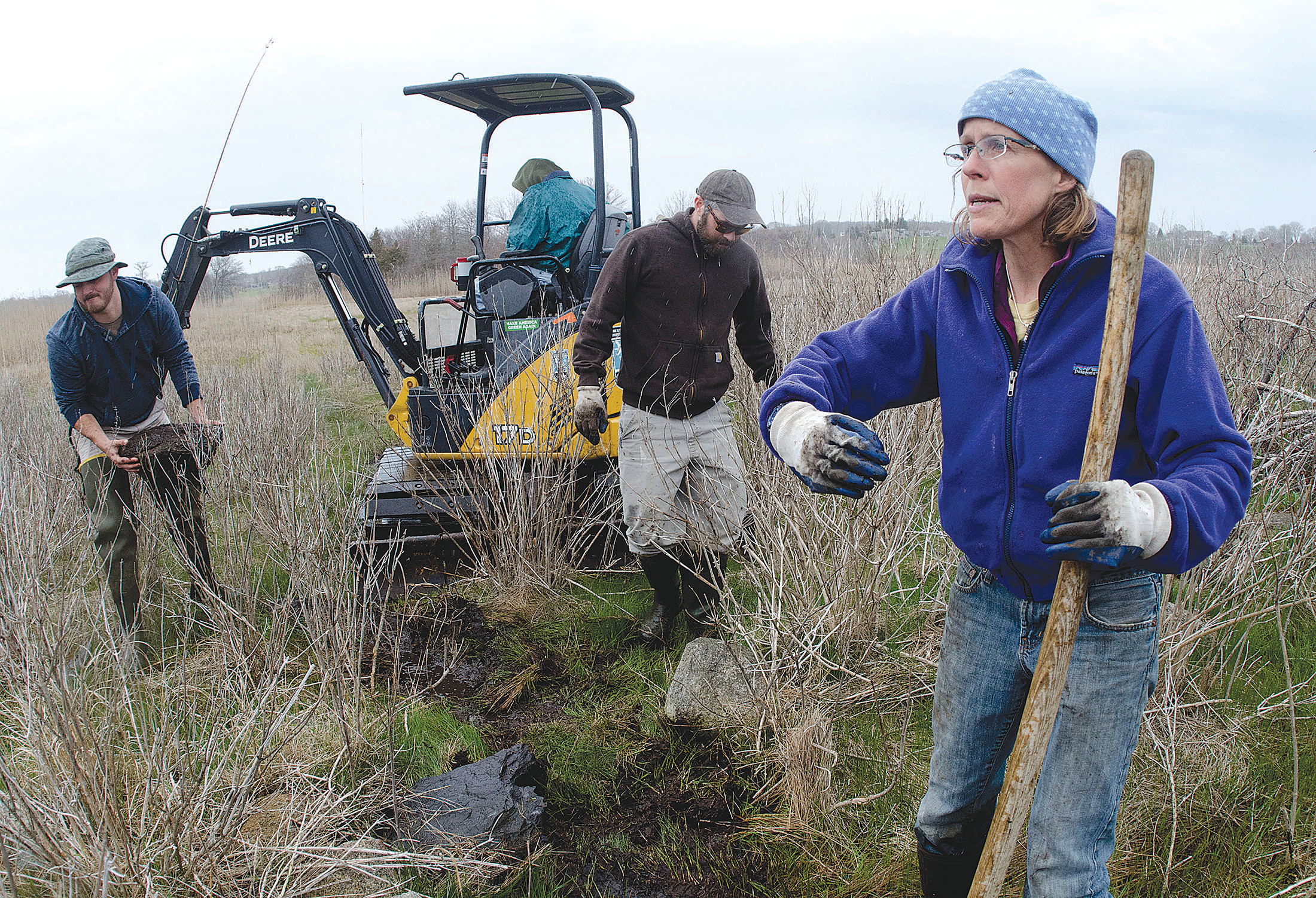 From left, Alex Burrows of DEM, Al Gettman of DEM, Tanner Steeves of DEM and Wenley Ferguson of Save The Bay dig runnels through the Seapowet Marsh to restore waterways and make the marsh viable.
Richard W. Dionne Jr. 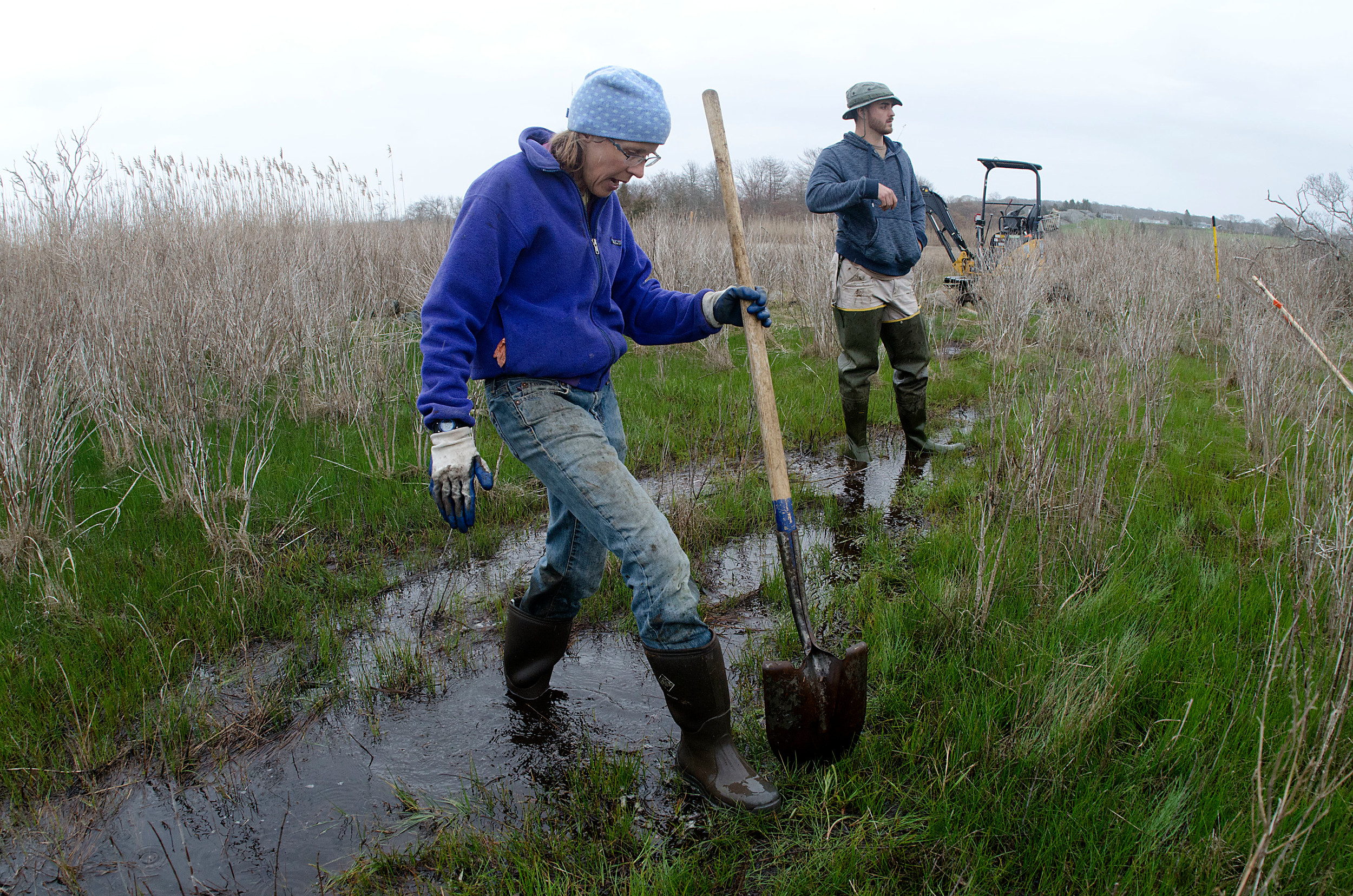 Wenley Ferguson of Save The Bay and Alex Burrows of DEM team up to dig runnels at the Seapowet Marsh.
Richard W. Dionne Jr. 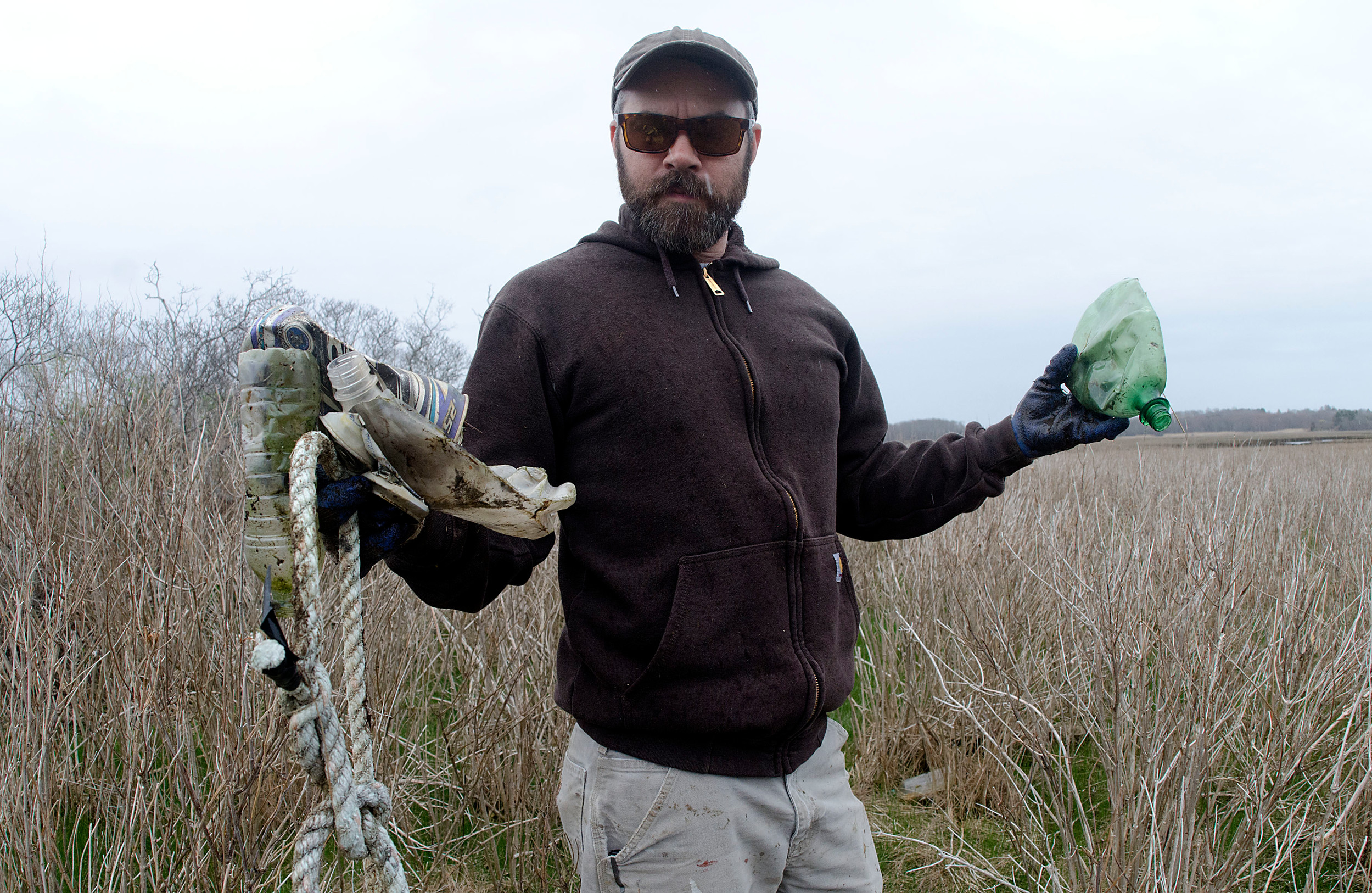 Tanner Steeves of DEM holds up trash that he found during the restoration.
Richard W. Dionne Jr. 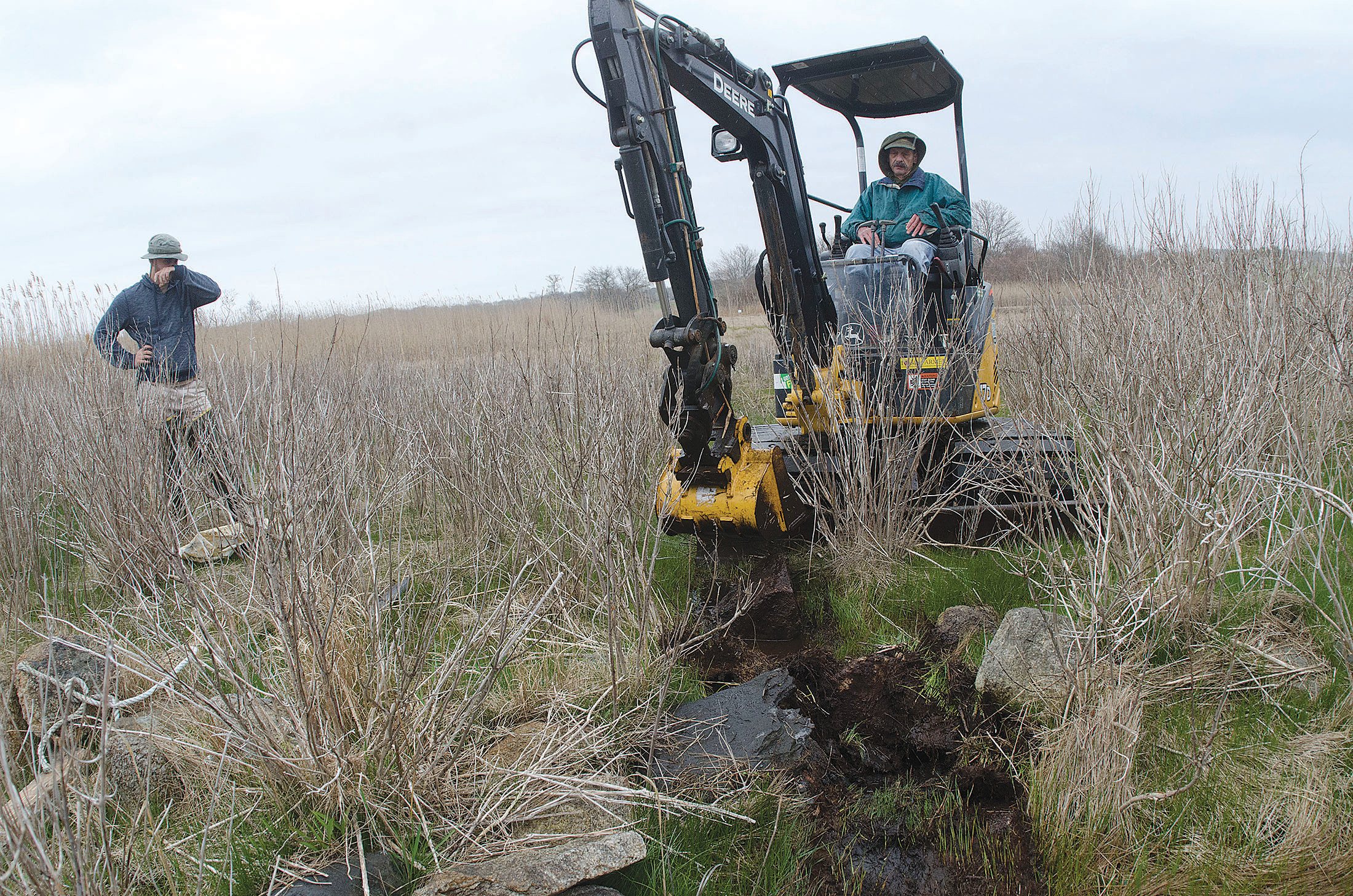 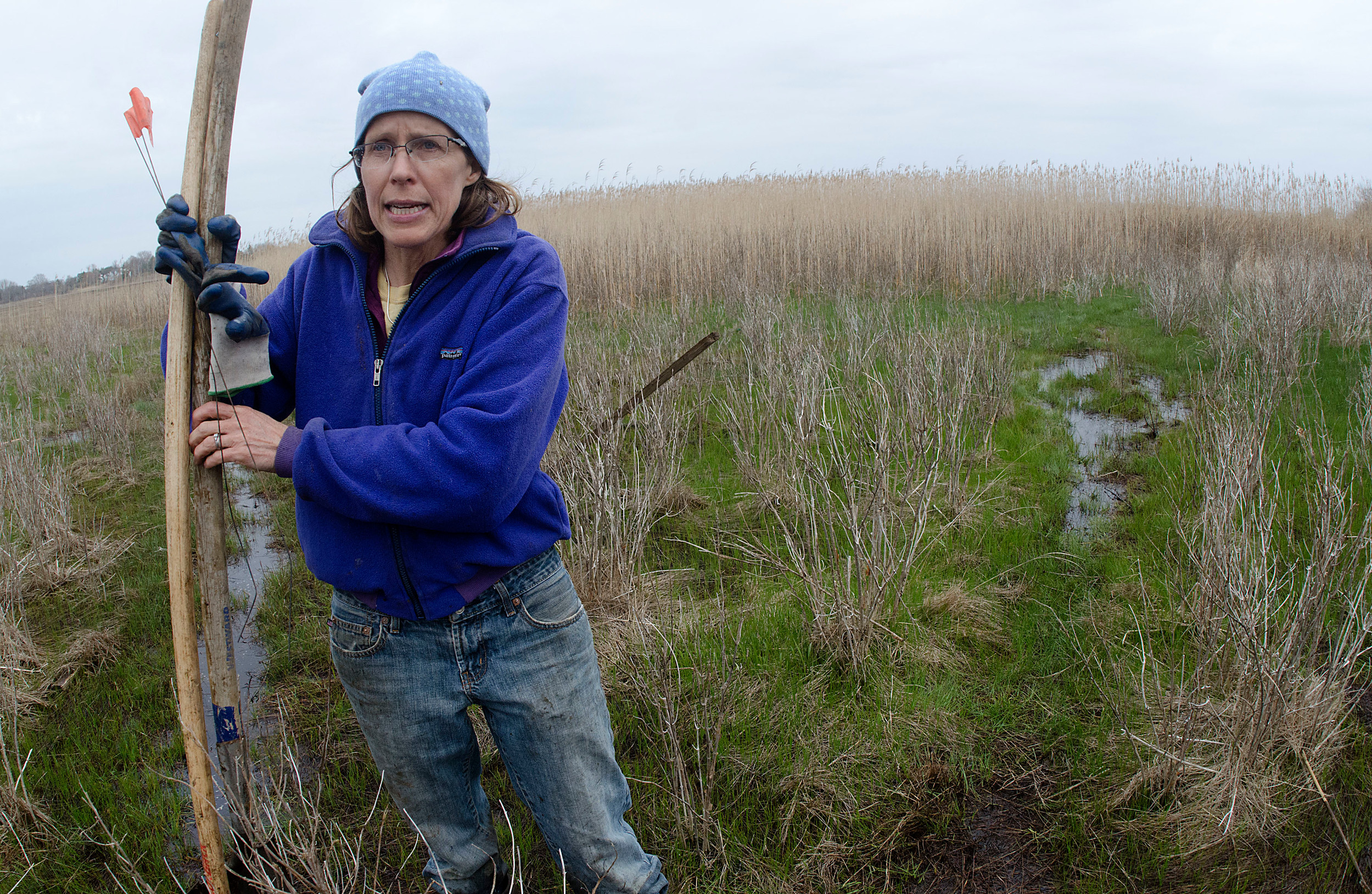 Wenley Ferguson of Save The Bay gives orders to the DEM crew.
Richard W. Dionne Jr. 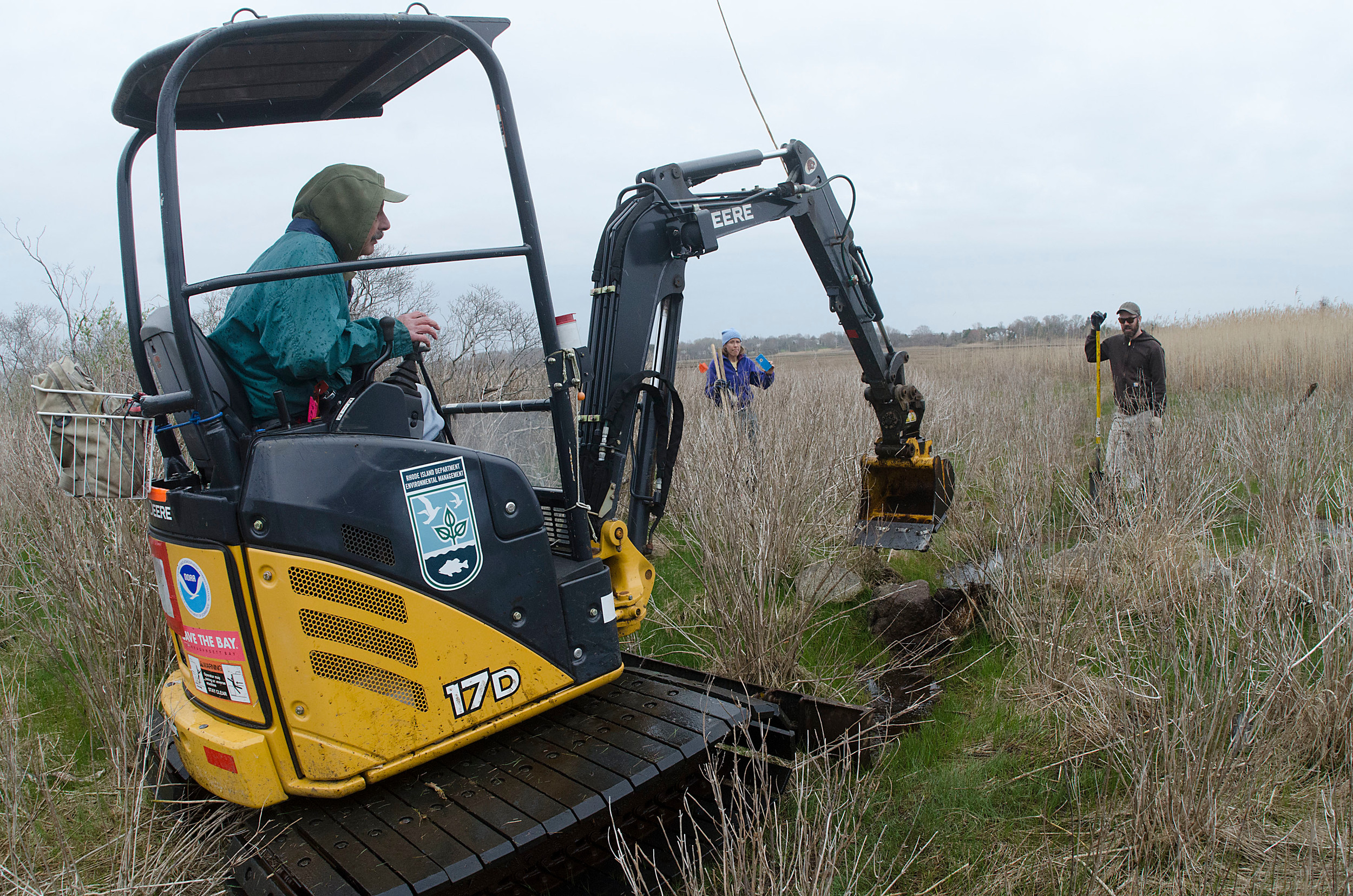 Al Gettman of DEM on the low ground pressure excavator opens up a waterway. With Wenley Ferguson of Save The Bay and Tanner Steeves.
Richard W. Dionne Jr. 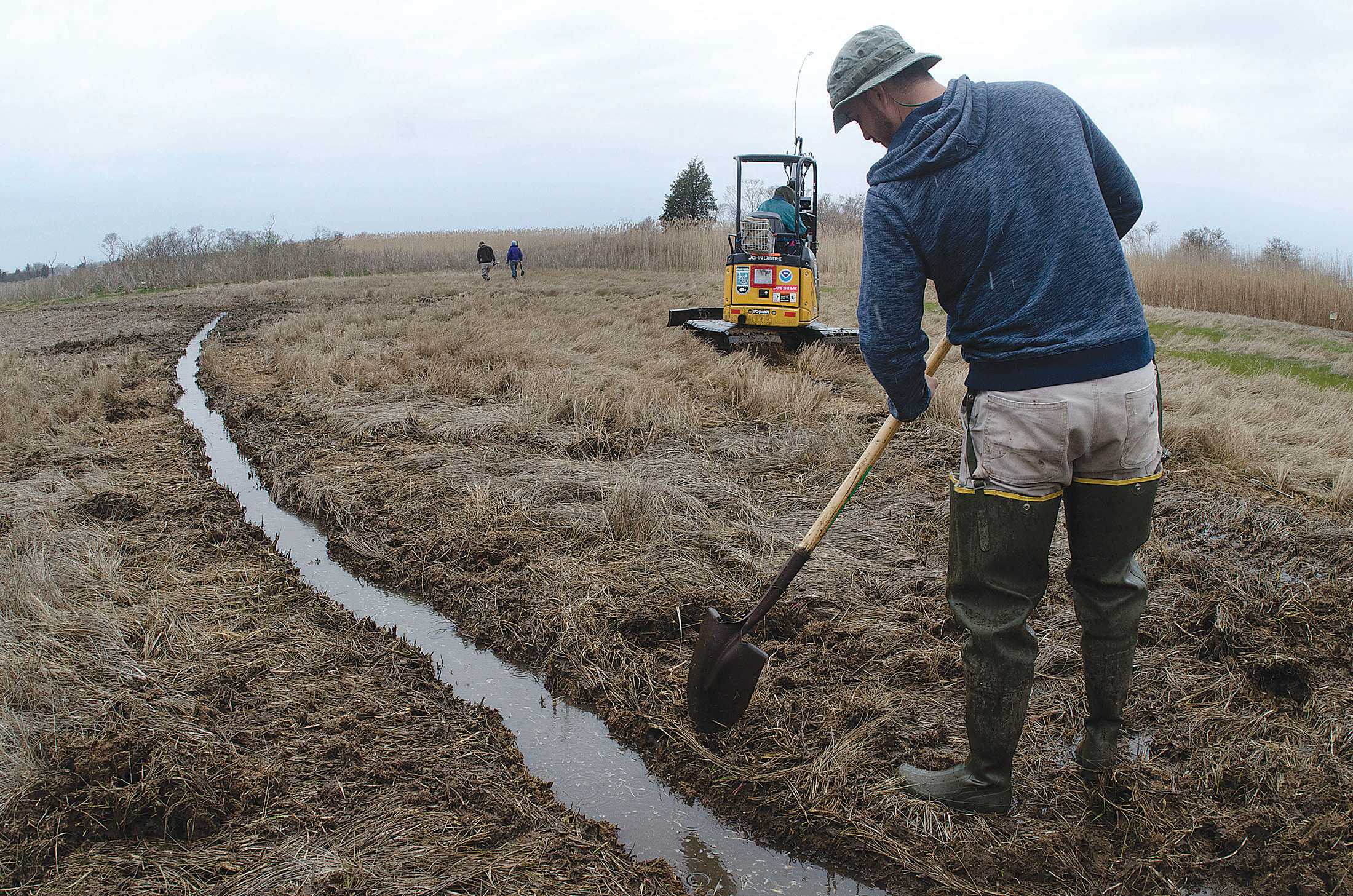 Alex Burrows finishes up clearing out a runnel as the others walk up to another part of the marsh.
Richard W. Dionne Jr. 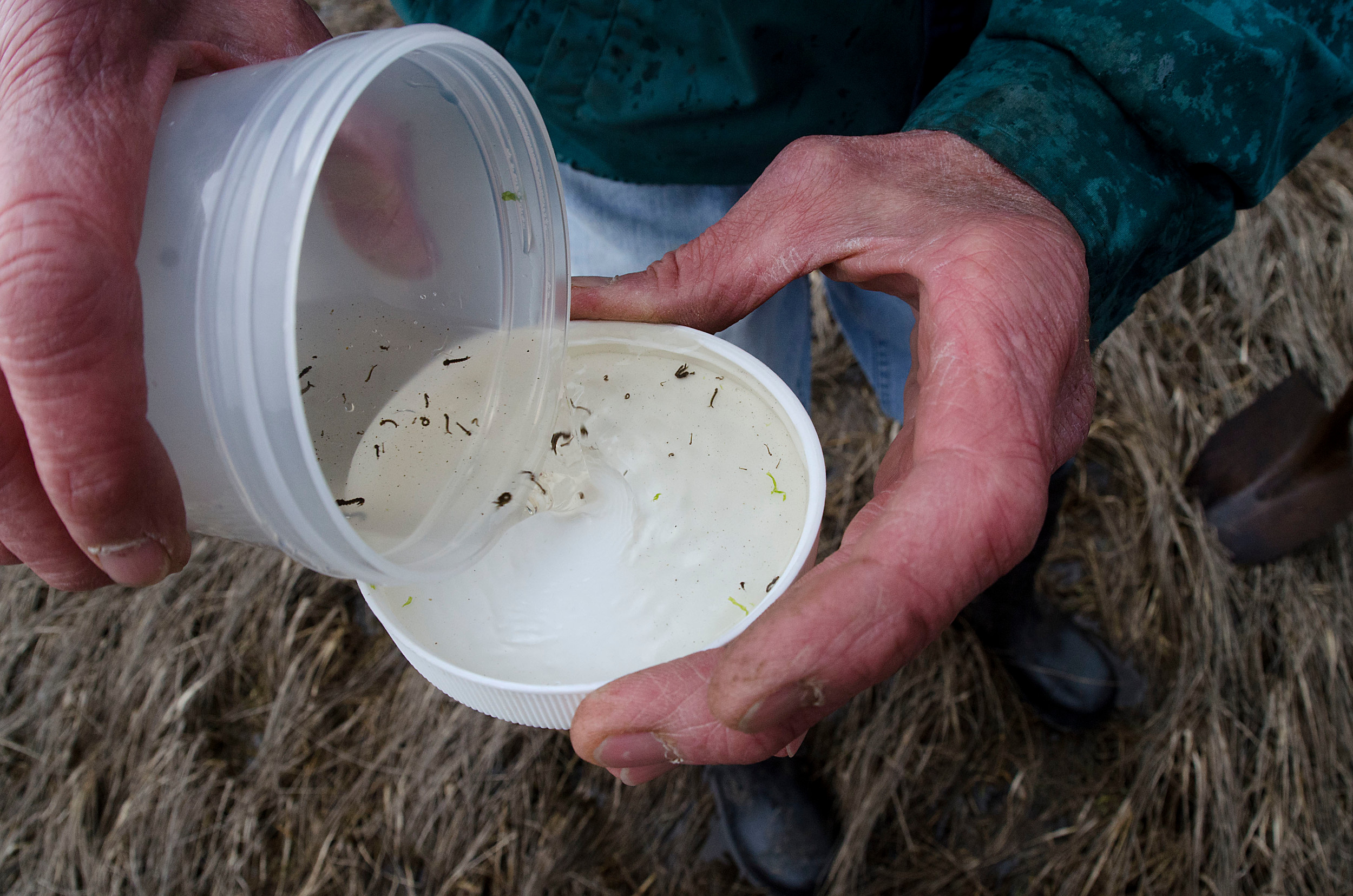 Al Gettman of DEM shows mosquito larva that he collected while in the marsh.
Richard W. Dionne Jr.
Previous Next
Posted Friday, May 4, 2018 12:00 pm
By Tom Killin Dalglish

Rising seawaters that are encroaching into Seapowet Marsh are threatening habitat destruction in “one of the largest marshes in Narragansett Bay,” says Wenley Ferguson of Save The Bay.

She and a four-person crew representing the Division of Fish and Wildlife in the Department of Environmental Management (DEM) and Save The Bay, were out at the marsh late last week, in what they call a “marsh restoration project.” They will be returning intermittently in coming weeks.

“We’re trying to prevent our marshes from drowning in place,” she said last Friday, after a day in the marsh.

“That’s why I call it adapting rather than restoring,” she said, a turn of phrase that may indicate the level of long-term optimism held about thwarting the effects of rising seas caused by climate change.

Her crew’s goal, she said, is “to facilitate the drainage of impounded water from the marsh surface through the excavation of small creeks and the maintenance of existing ditches ... to allow these degraded areas to revegetate, accrete sediments and reduce further subsidence of the marsh.”

To do this, they use simple shovels, and a machine built for the purpose, called a “low ground pressure excavator,” to excavate or carve out an estimated 4,440 linear feet of shallow channels, creeks, or “runnels,” that will range from 6 to 12 inches wide and from 10 to 12 inches deep.

What’s at stake is less problematic than the long-term effectiveness of their means to turn the migrating waters away.

You can tell the boundaries of the migration of sea water, Ms. Ferguson said, by looking for “black grass,” an early-greening grass with a deep root structure, that’s among the earliest grasses to “green-up” in the spring.

Also, she said, look for dead blueberry bushes, one of the upland vegetations that die as saltwater advances.

“We’re experiencing a period of accelerated sea level rise,” she said. “Historically, marshes were able to increase their elevation at about the same rate as sea level encroachment. Now we’re discovering salt marshes are not keeping pace with sea level rise in coastal areas like salt marshes.”

“Salt marshes,” she said, “are among the most productive habitats because of the vegetation that grows in them.”

The marshland vegetation helps where birds nest, she said, and “it becomes the base of the food chain. It fosters and supports species that in turn foster and support others.”

“Minnows live in salt marshes, and these small fish provide food for striped bass and bluefish,” she said.

“The marsh also supports birds, like the egret, and shore birds like the yellow leg and willet. The meadow marsh provides habitat for saltmarsh sparrows. But rising water is flooding their nests. High marsh grasses are beginning to die with sea level rise, and the habitat for these birds is disappearing,” she said. “Because of this, the saltmarsh sparrow is an indicator of climate change, kind of like our region’s polar bear.”

“Our project is trying to lower the water level, so the marsh is not flooded all the time. Plants can’t grow in water,” she said.

The project will plant switch grass, little blue stem, and other grasses, she said.

One of the objectives is mosquito abatement. The other day she looked down into a small pool, she said, about “the size of a coffee table, and there were all these little squiggly lines. They were mosquito larvae. These natural pools are pretty deep, and when the mosquito lays its eggs in these depressions — because there are no fish, no predators, they do wonderfully.”

“These little creeks we’re digging,” she said, “bring fish up into the pools, and the little minnows eat the mosquito larvae.”

Ms. Ferguson said she and her crew are going to continue their work on an occasional basis in the coming months, and “once fall comes we’ll be in another area of the marsh.”

Her group’s work is supported by a $19,242 grant from the Coastal Resources Management Council’s Coastal and Estuarine Habitat Restoration Trust Fund for the early phase of the project, for which DEM is providing a match in the amount of $16,000.