Eagles coach: 'I think we should have been in the playoffs'

The Barrington High School football team scored four touchdowns during an eight minute span and rolled to a 41-13 victory over Mt. Hope on Thanksgiving Day.

The Huskies and Eagles remained …

Eagles coach: 'I think we should have been in the playoffs' 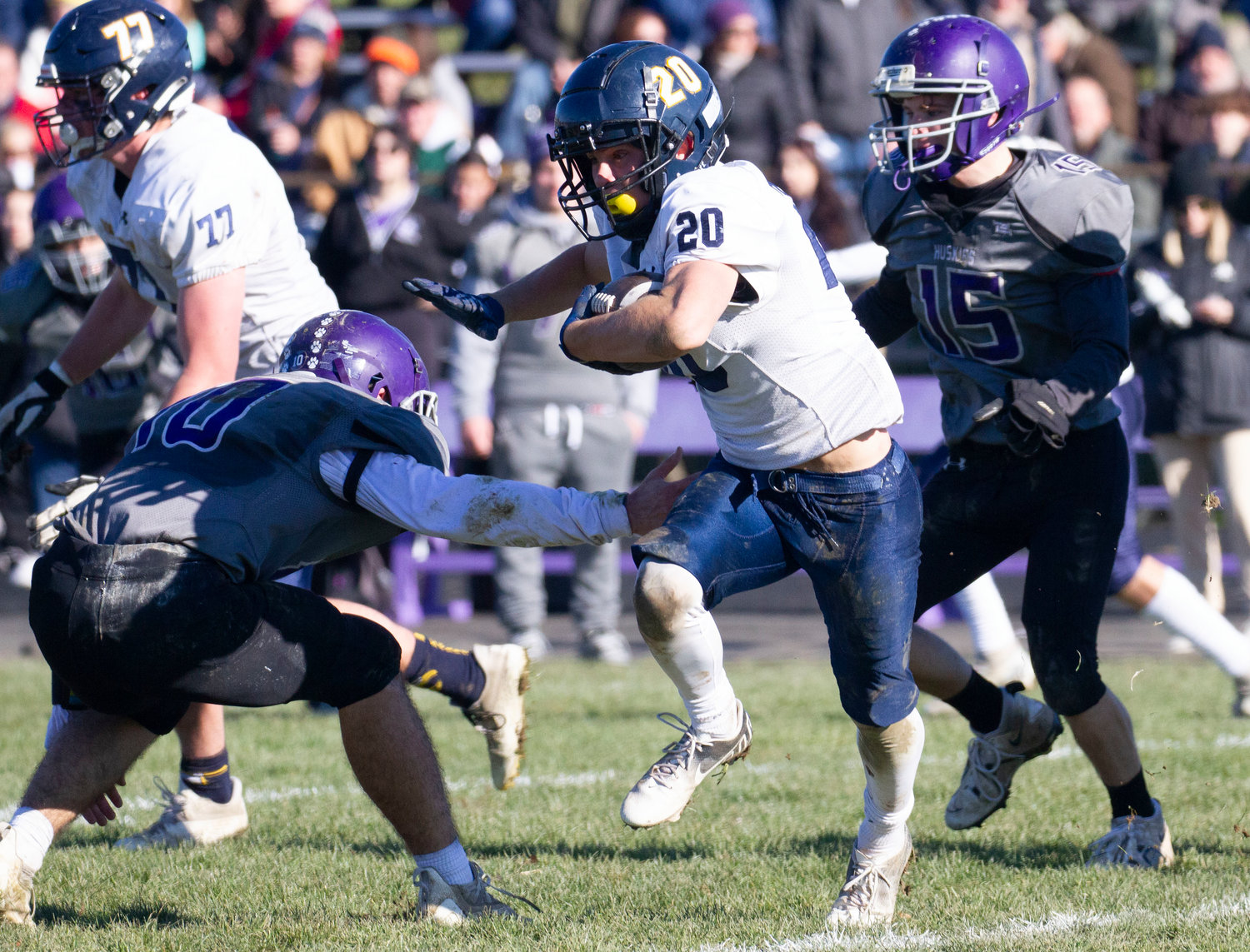 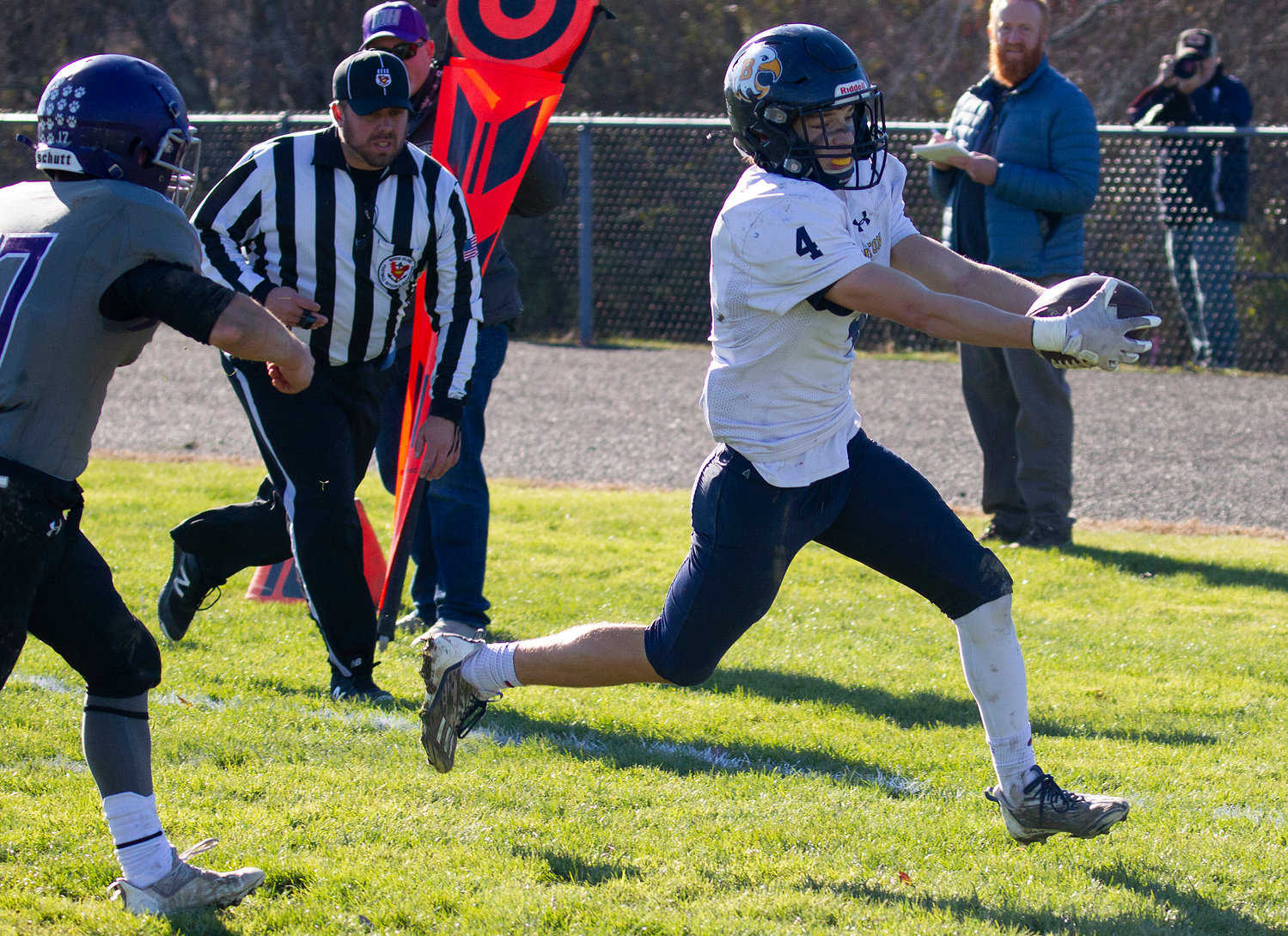 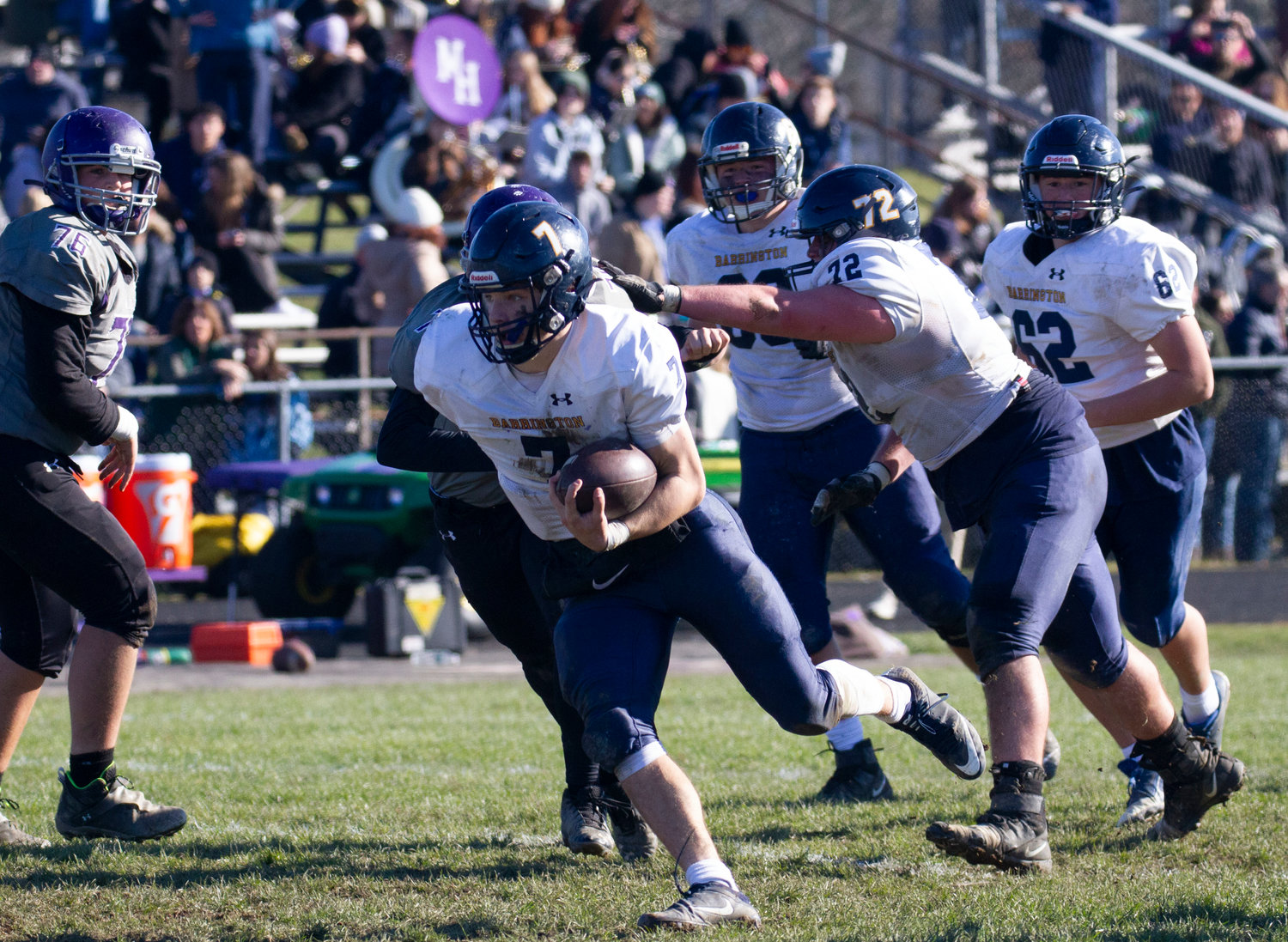 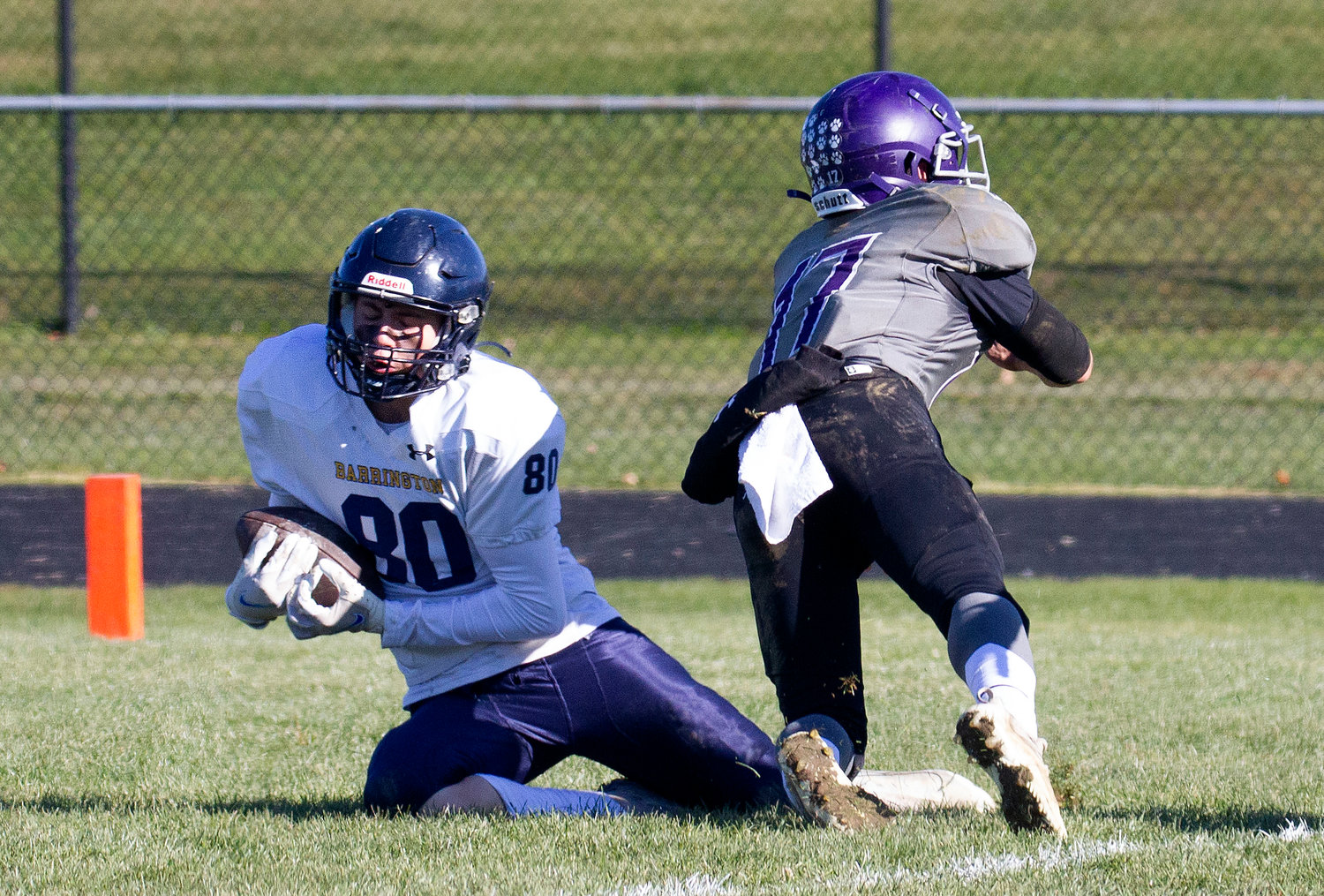 The Barrington High School football team scored four touchdowns during an eight minute span and rolled to a 41-13 victory over Mt. Hope on Thanksgiving Day.

The Huskies and Eagles remained scoreless through the first quarter of the annual rivalry game, and Mt. Hope trailed 7-0 about half-way through the second quarter. But facing a fourth down and three at their own 32 yard line, the Huskies called for a fake punt.

Barrington’s defense was ready and dropped the ballcarrier for a loss. On the ensuing play, Eagles’ quarterback Alex McClelland called his own number and broke free for a 31-yard touchdown run.

Up 14-0, Barrington never looked back.

On the kickoff to start the second half, Mt. Hope’s Nathan Calouro fumbled and the Eagles’ Harrison Cooley scooped up the loose ball and ran into the end zone. Leading 34-0, Barrington’s Payton Murphy capped the Eagles’ scoring with a 49-yard touchdown run.

It was 41-0 in the third quarter when Barrington turned to its back-ups.

“We had to come in aggressive today,” said Barrington senior linebacker Dan Lemos. “We knew Brock Pacheco was top-three in the state for rushing. (Barrington Coach) Jimbo (Jim Anderson) kept saying you have to be aggressive. You have to come downhill at him.”

“We knew they were outside orientated… we did a little different defense today. I don’t know if they prepared for it,” Coach Gorham said. “I think it worked really well.”

Barrington and Mt. Hope took turns moving the ball between the 20s to start the game.

About mid-way through the second quarter, Barrington took over possession at its own 28. The Eagles picked up a first down on a pass interference call and then Murphy gashed the Huskies’ defense for 32 yards. The carry pushed the senior running back over the 1,000-yard mark for the season.

Facing a third and five at the Huskies 15 yard line, Barrington turned to Ivatts. The junior slot back took a handoff and bolted around the left side of the Huskies’ defense for a touchdown. Will Hopkins kicked the extra point and the Eagles led 7-0.

Barrington capitalized after stopping the fake punt attempt, as McClelland ran for a touchdown. McClelland also showed off his passing arm in the victory — the junior QB was four-for-five, passing for 58 yards and two touchdowns.

Gorham was pleased with the precision.

“They (Mt. Hope) played off (the Barrington receivers) a little bit more, and that opened up the passing game a little bit,” Gorham said.

The Eagles head coach was happy to be able to send off his seniors on a winning note.

“It’s huge. We won the last three games,” Gorham said. “I think we should have been in the playoffs. It frustrates me that we weren’t. We felt we were a playoff team. We finished strong against a big tough Woonsocket team. A Mt. Pleasant team, we pretty much dominated. And here…

“The seniors will finish their varsity career with 20 wins and seven losses,” Gorham said, adding that the seniors did not win a single game in their freshmen year.

“It’s a positive feeling winning this game. The kids will feel good about themselves. Hopefully more kids will want to play. We had four seniors who had never played before. That says so much.”

Lemos was named Barrington’s MVP in the victory.

“I felt great. I felt alive,” Lemos said. “My last game ever. I may or may not play college football, but I’m always going to remember this game.”