Expert shows how and why the tide is rising in Bristol

The weather last Saturday morning was foul in Bristol. The rain alternated between a light drizzle and just shy of a downpour, making …

Expert shows how and why the tide is rising in Bristol 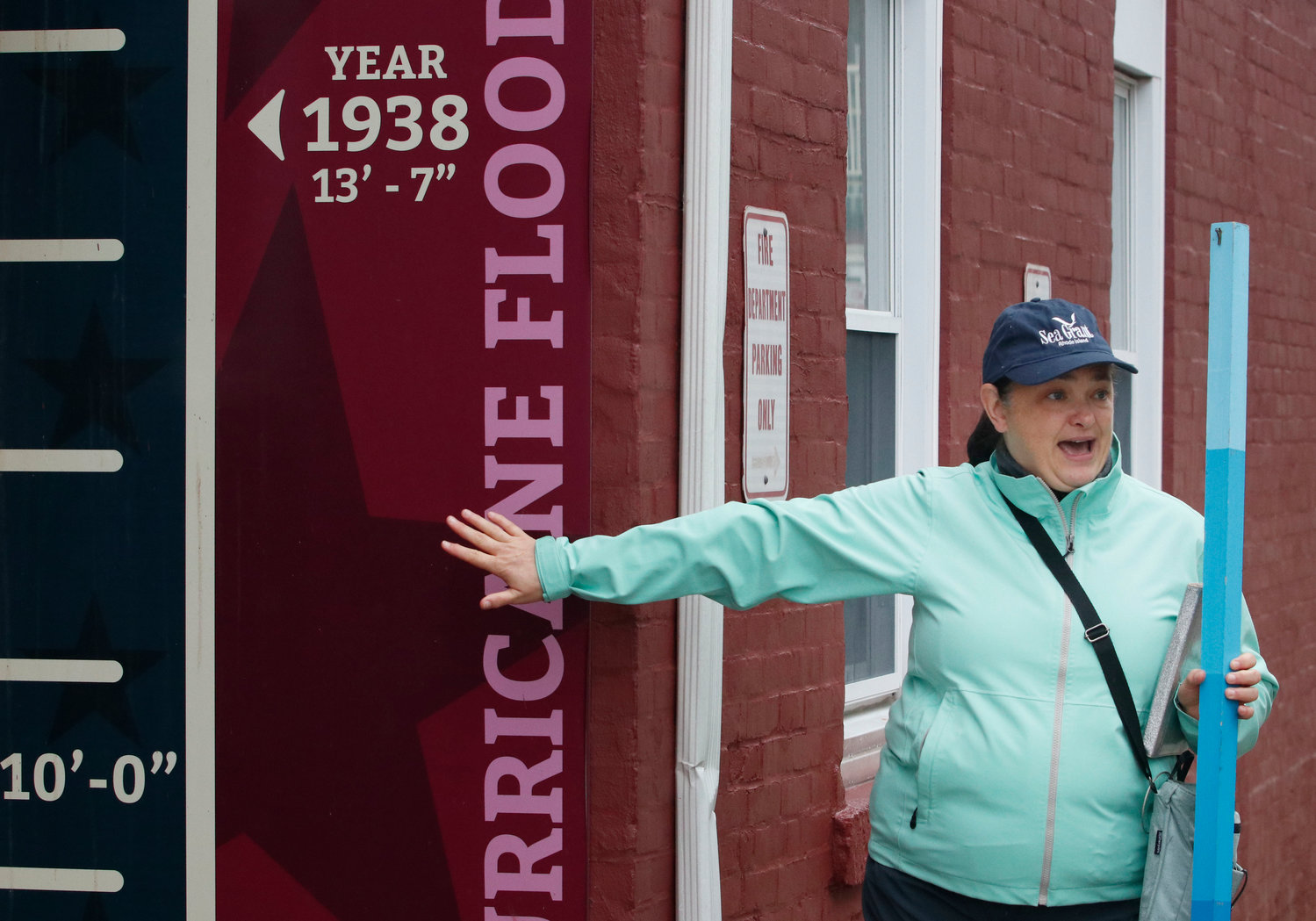 Theresa Crean talks about a 100-year flood event, as happened in 1938. This marker on the side of the Everready Fire Station on Thames Street shows where the water rose that day.
Photos by Richard W. Dionne Jr. 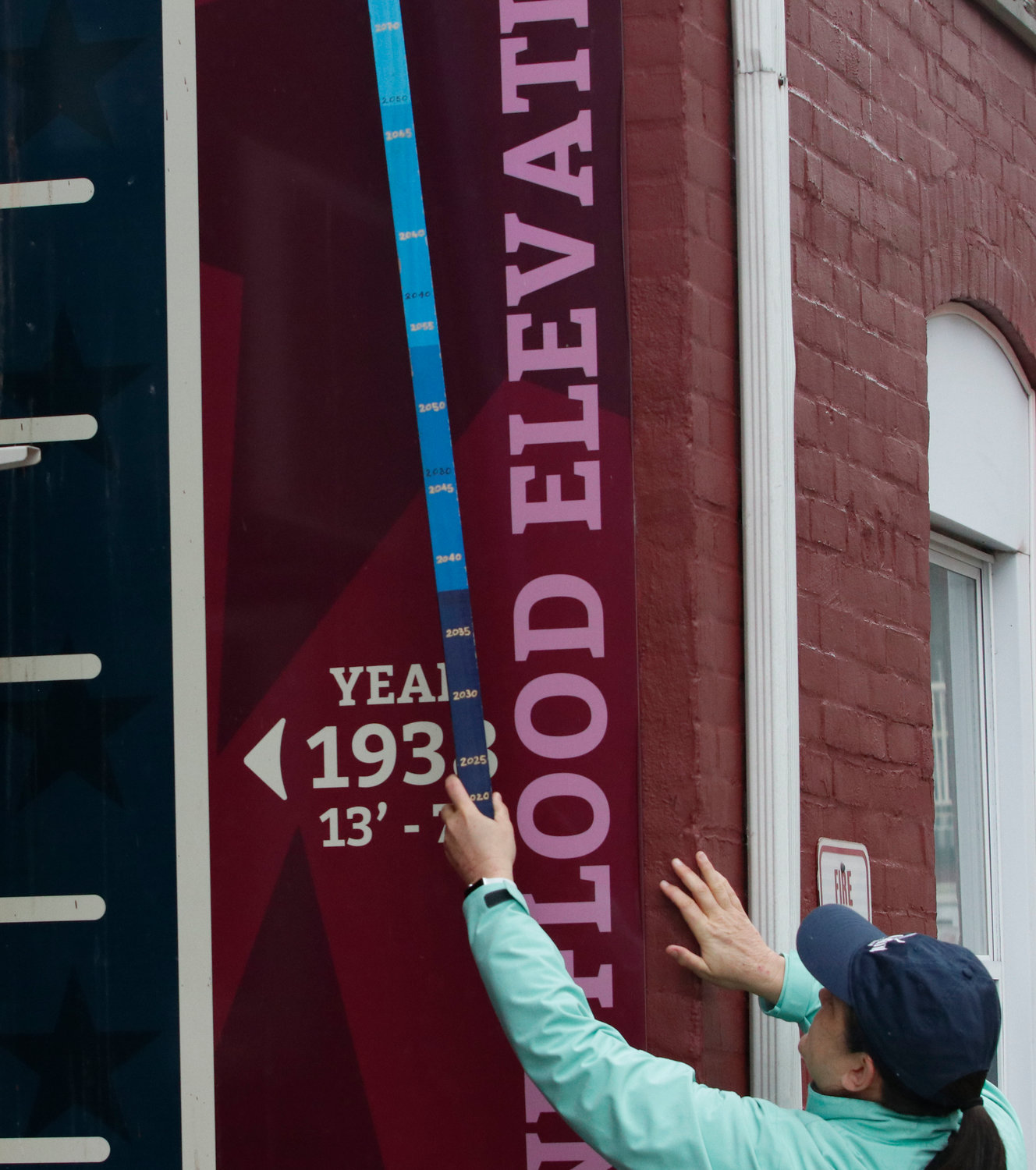 Theresa Crean holds her “Sea Level Stick” next to the high water marker on the Everready Fire Station on Thames Street. The marker shows where the water reached during the Hurricane of 1938 — Crean’s stick shows how much worse off the region would be if the same storm hit today. 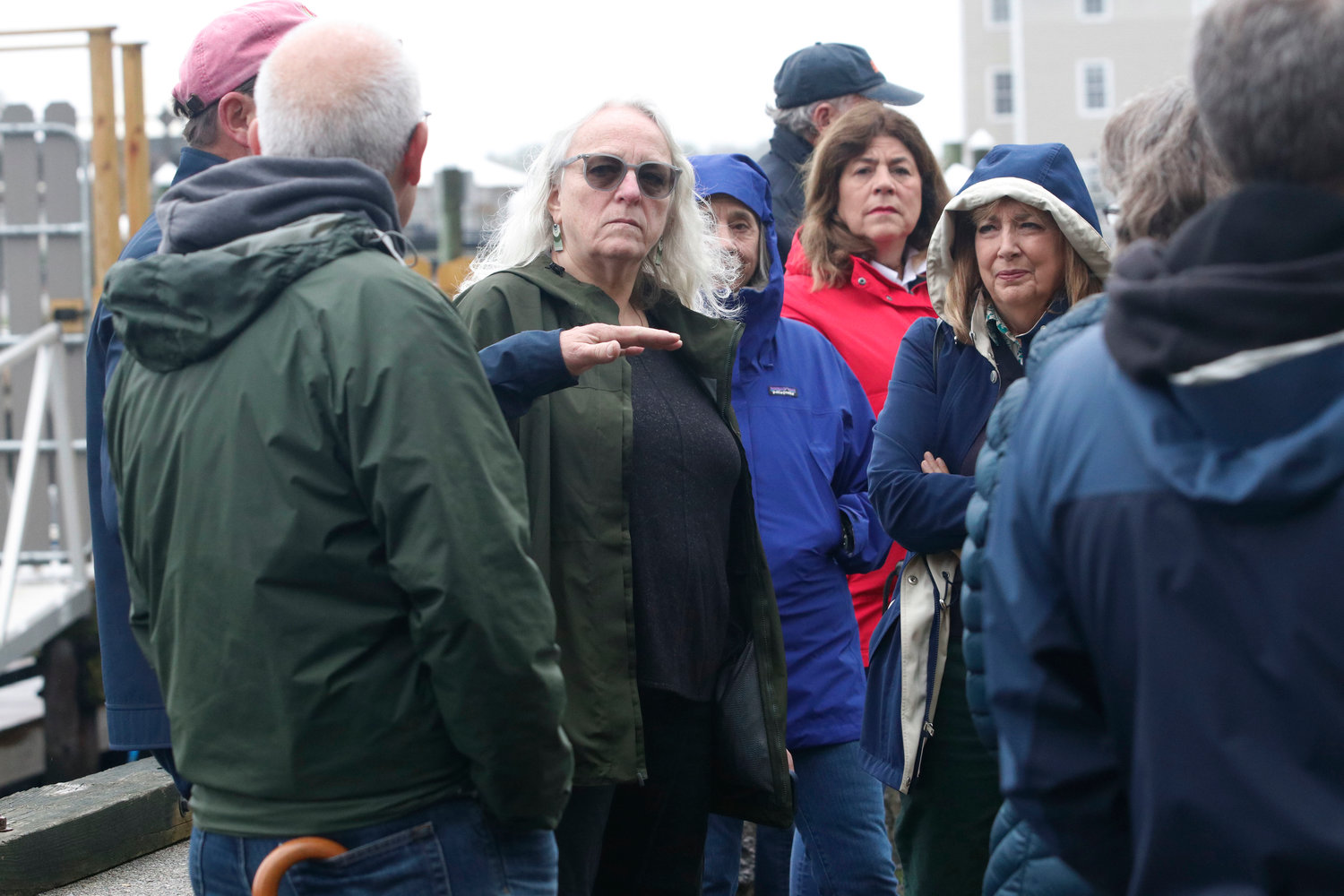 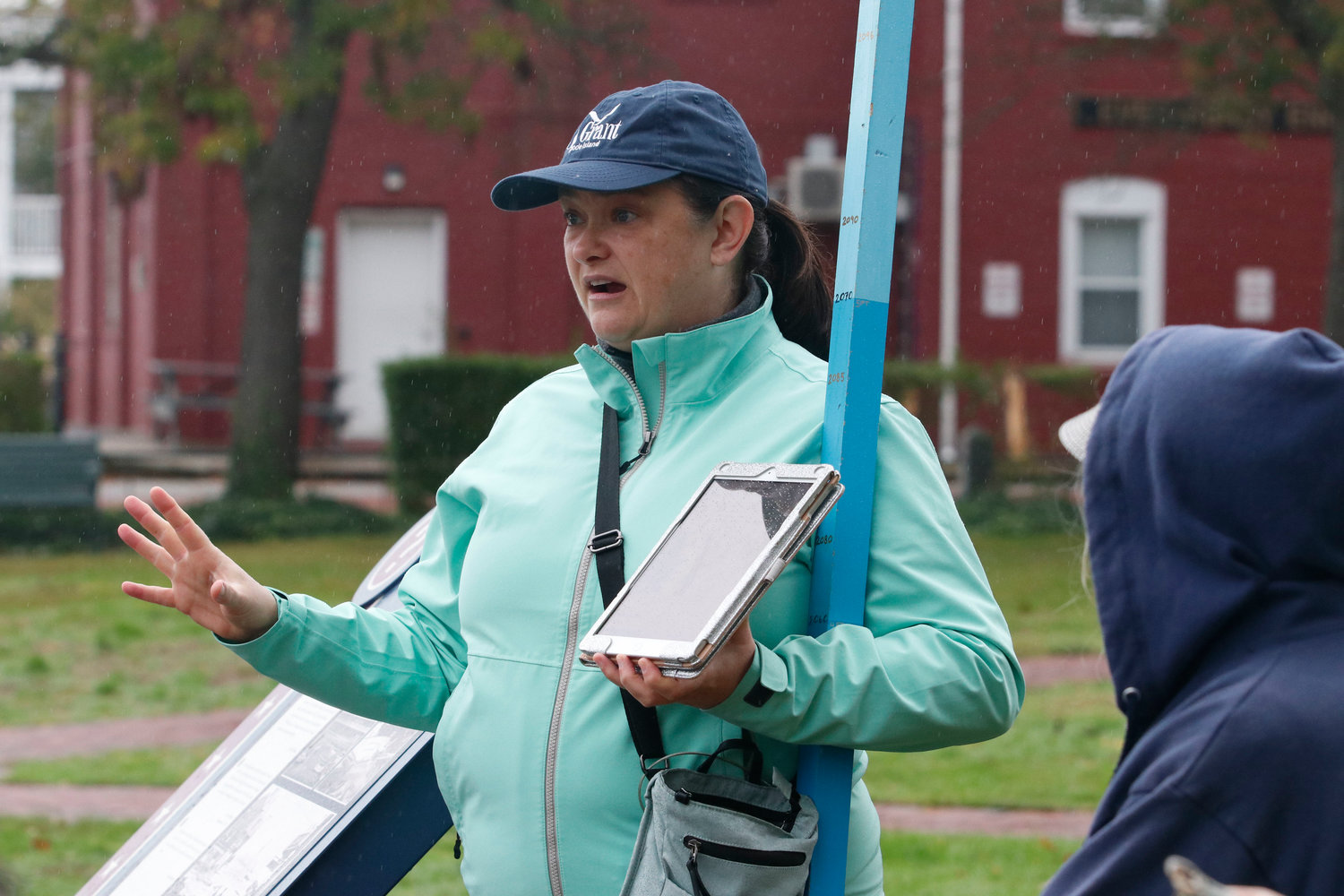 Theresa Crean talks about the impact of rising water levels on downtown Bristol. 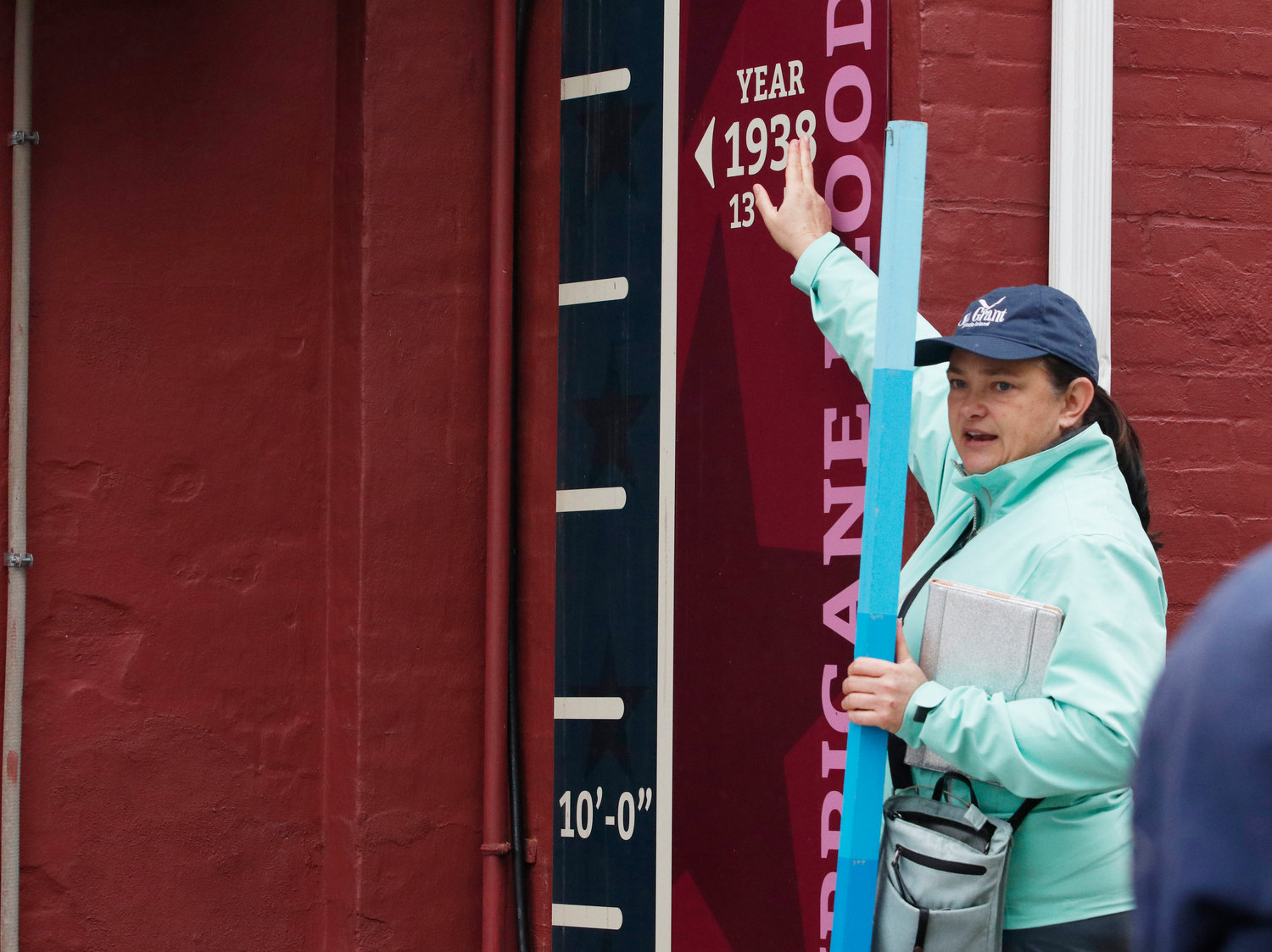 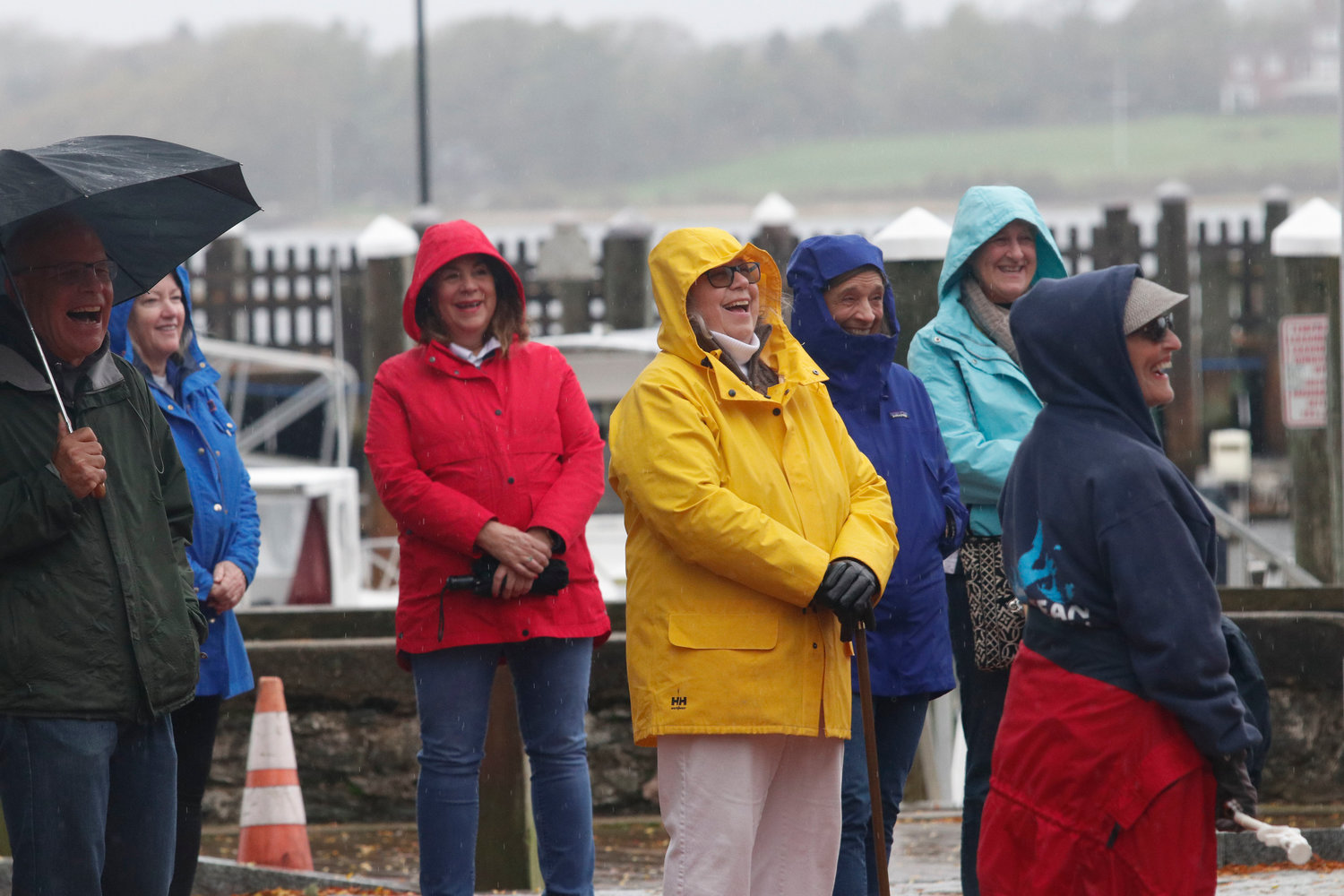 Walking tour attendees enjoy a moment of levity during a discussion of a very serious topic: the expected impact of sea level rise in downtown Bristol over the next 80 years. 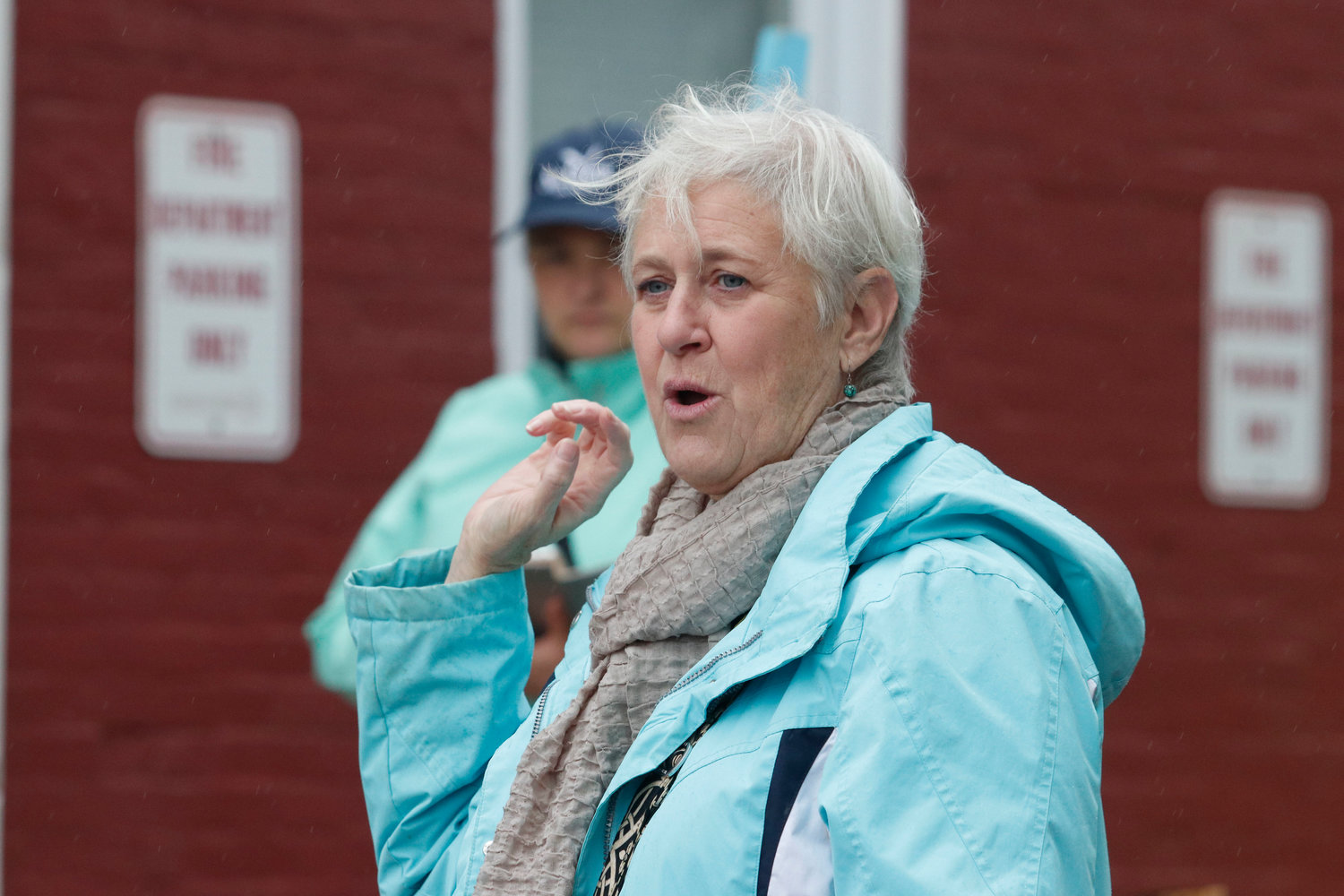 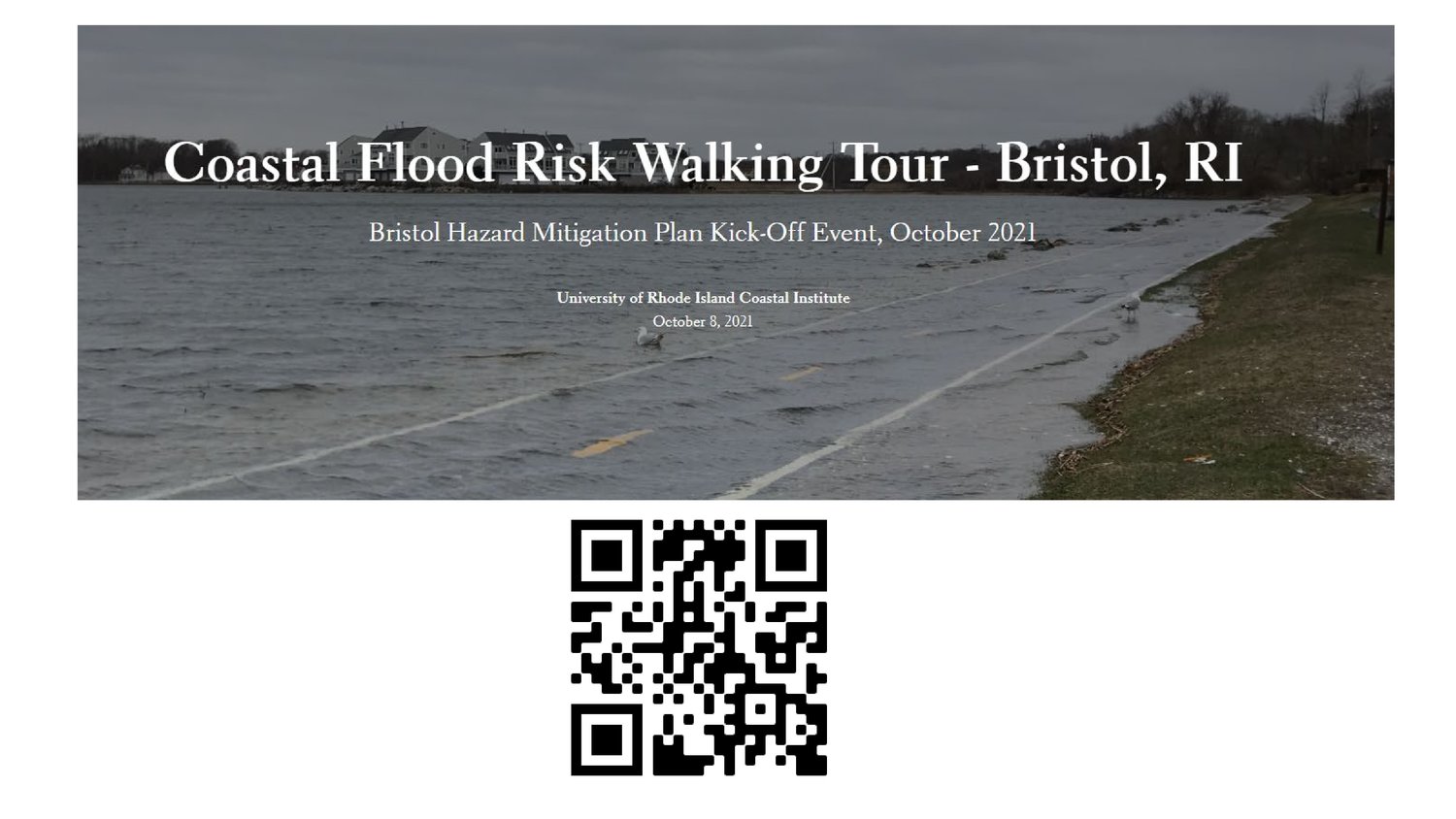 Use this QR code to follow your own tour of the vulnerable coastal areas of Bristol.
Previous Next
Posted Thursday, November 4, 2021 7:00 am
By Christy Nadalin

The weather last Saturday morning was foul in Bristol. The rain alternated between a light drizzle and just shy of a downpour, making it an appropriately wet morning for an in-depth, in-person conversation about just how much water the downtown will be taking on in the next century, due to sea level rise.

The tour was led by Teresa Crean, a community planner and coastal management extension specialist with the Coastal Resources Center (CRC) and Rhode Island Sea Grant at the University of Rhode Island’s Graduate School of Oceanography. Crean facilitates municipal-scale projects in Rhode Island that address coastal adaptation to climate change and sea level rise. Part of those efforts include the development of StormTools (www.beachsamp.org/stormtools), an online mapping app that shows sea level rise in specific locations under a variety of projected circumstances.

Crean has also been instrumental in the development of the Coastal Flood Risk Walking Tour, which, despite the weather, was embarked on by a respectably large group of a couple dozen local residents and policymakers.

Wielding a large red “sea level” stick like a tour guide with an umbrella, Crean led the group tour from the Armory to the Everready Fire station to a short way up John Street before a steady rain broke up the party for good, but despite the shortened tour, the message was clear: sea level rise is here, it’s documented, and municipalities (and residents) need to take action now in order to mitigate the worst of the potential negative impacts down the road.

This is the fact: there has been 10 inches of sea level rise in Narragansett Bay since 1930. While there is certainly a lot of uncertainty moving forward, along with hope that mitigation can change the outcome, NOAA data provided by ocean instrumentation suggests that bay-adjacent communities in Rhode Island could be facing 3 feet of sea level rise by 2050 and more than 9 feet by 2100.

“Think of a 30-year mortgage,” said Crean. “If you bought a house now, where will the sea level be when you pay it off?”

Though sea level rise is a global concern resulting from the melting of land-based ice and the thermal expansion of water when temperatures rise, there are a couple of other factors that will make sea level rise a bigger problem for coastal New England than some other places. For one, there’s gravitational pull from the massive, two-mile-thick ice sheet that sits on Greenland. The sheet is so large that it creates its own gravity and pulls the ocean towards it. So as it melts, not only is that water being added to the ocean, the resulting decrease in gravity is lessening the force with which it pulls the ocean towards it — and away from us.

Another issue is the change in elevation of the coastline itself, a factor of the rebounding of some of the land in North America following the recession of the glacier that covered the continent 20,000 years ago. As that land that was once covered with ice began rebounding — rising after being compressed by ice — other areas, including Rhode Island’s coastline, actually began sinking.

Taken together, these forces mean that Rhode Island is that much more susceptible to sea level rise than the global average. The state also has a lot to lose. According to “Historic Coastal Communities and Flood Hazard: A Preliminary Evaluation of Impacts to Historic Properties,” a 2015 report prepared for the Rhode Island Historical Preservation and Heritage Commission, there are thousands of historical sites at risk from sea level rise statewide. Bristol alone has nearly 200 National Register-listed or eligible properties located within the coastal flood zone, as mapped by the Federal Emergency Management Agency (FEMA).

According to Diane Williamson, Bristol community development director, a complete assessment of those properties will be included in a new update of the town’s Hazard Mitigation Plan.