Inflation, combined with a decreased focus on the pandemic and the food insecurity it caused, has led to increased need for the communities served by the East Bay Food Pantry. 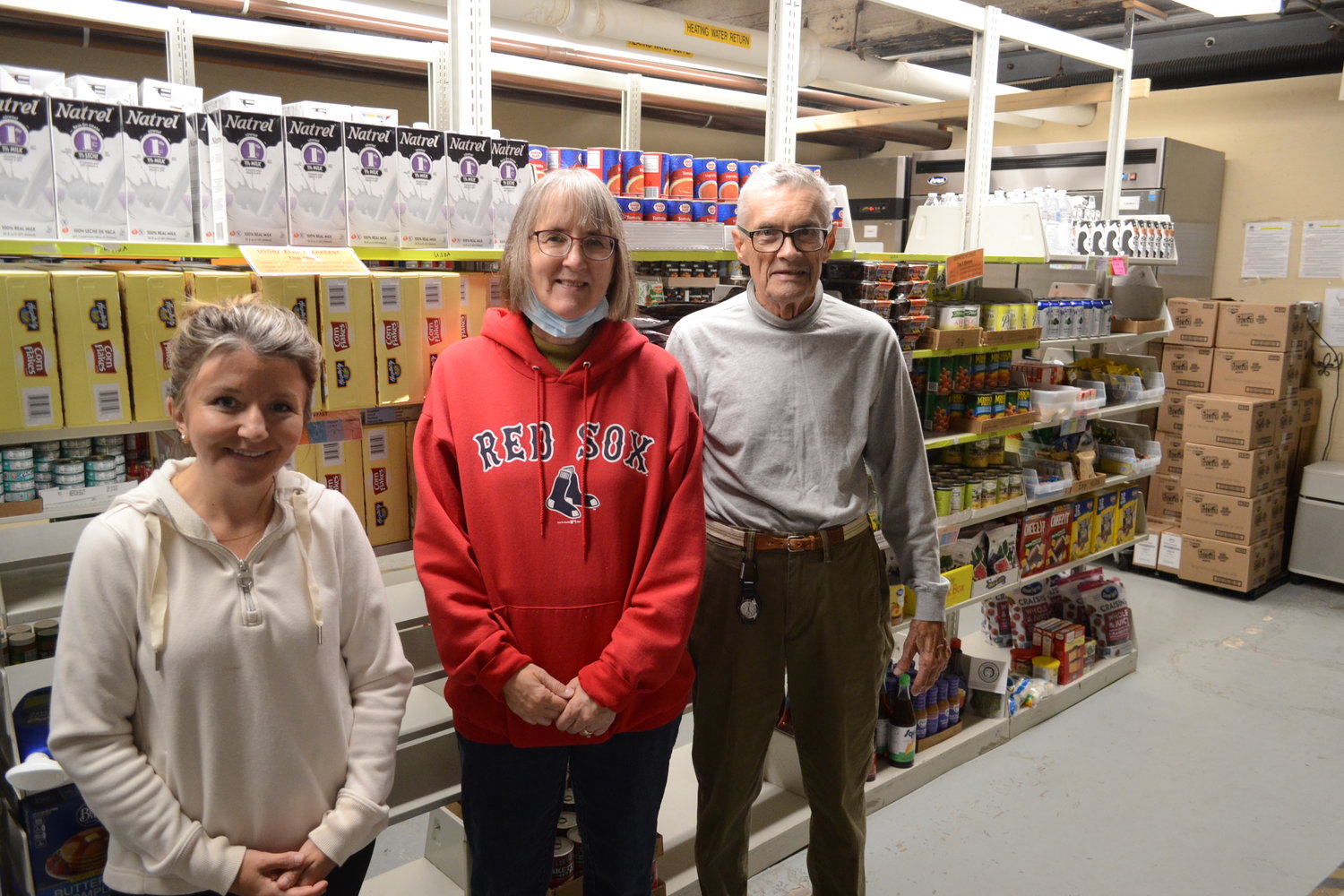 Emily Mushen, Linda Beall, and Bob Molloy, who have been volunteering for the East Bay Food Bank and Thrift Shop for two and a half years, one year, and 12 years respectively, during a normal day helping out inside the pantry. The food bank has around 160 volunteers, about half of whom volunteer multiple days a week throughout the year.
Ethan Hartley
Posted Monday, September 26, 2022 7:29 pm
By Ethan Hartley

One of the bright sides of the pandemic, for some nonprofits at least, was the barrage of donations and support they received when times were at their most dire.

Karen Griffith, who stepped into the executive director role at the East Bay Food Pantry and Thrift Shop in the fall of 2019, looks back with great appreciation for how donors buoyed the organization through its most trying of times.

“I have to say, our donors were just incredible. I can’t say enough about how people came out to support us,” she said.

Outside of donations, the group’s thrift shop is responsible for a significant portion of their revenue. That shop had to close down, like all other retailers, for two full months, and was only to open up for shortened hours for a while after that. Despite that fact, none of their programs stopped delivering food to those in need, which includes children, teens, and, primarily, adults of all ages and senior citizens.

“Our donors came out of the woodwork,” she said. “People were donating more, people who never donated before were donating. People knew the need was there.”

The food pantry’s 2020 annual report showed a total of $1,183,693 in revenue from in-kind and other contributions, equating to over three quarters of their total revenue, with the majority of that last quarter coming from $225,000 in grants, and the remainder from the limited thrift shop sales. For perspective, in 2019, the pantry saw $474,198 from donors — a jump of nearly 2.5 in one year.

With awareness decreasing, need increases
The windfall from that unprecedented flow of donations dwindled a year later, to just over $1 million, as reflected in the pantry’s 2021 annual report. Griffith attributes some of that to the pandemic becoming less and less forward in peoples’ minds, and with that, a lessening focus on food insecurity around them.

“As people have have felt like things are getting back to normal — and while we still have many very, very generous donors and I want to make sure we we thank them and acknowledge that many people are still supporting us — we have seen some of those donations falling off a bit,” Griffith said.

That unfortunately corresponds with current conditions — where pandemic assistance programs, including free lunch for all students, have ceased, and inflation has driven up the cost of purchasing food, and those with limited income are feeling the squeeze in every facet of their lives.

“When that's combined with what prices have been doing…grocery store prices, gas prices, the price of heating oil I think is going to be a big factor,” Griffith said. “We're seeing the demand really increase again.”

Griffith said that in January and February of 2022, they were seeing about 500 visitors to the food pantry each month for their various programming. That has nearly doubled, to 1,000 a month, as of August.

The price increases are affecting the food pantry itself too, as Griffith said they have seen between a 40 to 50 percent increase in the cost of purchasing fresh produce, which constituted about a third of their total food purchased in 2021.

“It’s a combination of food costing more and us having to buy more of it due to the need,” Griffith said.

The pantry is able to function, Griffith says, due to their volunteers. They have about 160 total, half of which volunteer consistently each week throughout the year. Paid staff amounts to only 10 part-time employees.
“We really rely on volunteers to keep our programs running,” Griffith said.

Griffith said that the best way to help the food pantry and those in need throughout the East Bay — the pantry serves the entire region as an anchor organization for the Rhode Island Community Food Bank, from Newport to East Providence — is to donate. Whether that is money, time, or items to the thrift shop, it all helps.

Go to EastBayFoodPantry.org to learn more or to donate.