Judge: Committee did not provide sufficient notice of meeting where vaccine mandate policy was enacted

Judge: Committee did not provide sufficient notice of meeting where vaccine mandate policy was enacted 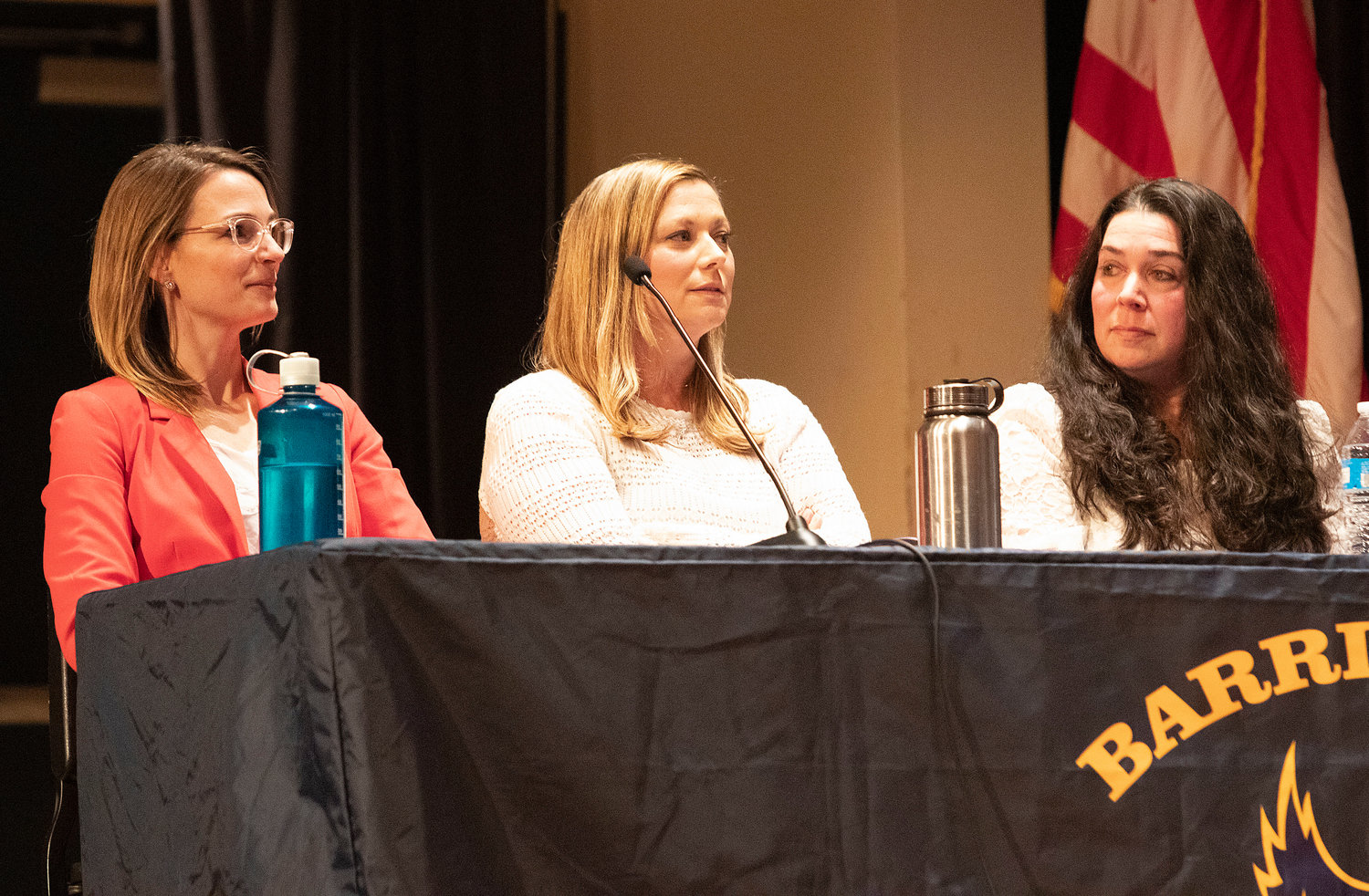 Former Barrington teachers Stephanie Hines, Brittany DiOrio and Kerri Thurber (from left to right), shown during their appeal hearing on March 31, were fired after the school committee denied their religious exemption request to the vaccine mandate. On May 25, a Superior Court judge ruled that the Barrington School Committee violated the state’s Open Meetings Act by failing to provide sufficient notice before enacting the school district’s vaccinate mandate for teachers.
Posted Thursday, May 26, 2022 4:07 pm
By Josh Bickford

The ruling served as vindication for three former Barrington school teachers, Brittany DiOrio, Stephanie Hines and Kerri Thurber, who were fired after the district would not grant their request for a religious exemption to the mandate.

Judge Jeffrey Lanphear wrote in his decision that the case was not about whether mandating vaccinations was appropriate.

“Regardless of the significant political stance which the public may take for or against that issue, the issue here is whether the Barrington School Committee provided sufficient notice before enacting the Emergency Policy on COVID-19 Related Issues in August and September 2021. This Court finds that violations occurred.”

Earlier in the decision, Judge Lanphear wrote: “With minimal and vague notice, it is reasonable to conclude that few knew of the actions being taken. There is no evidence to prove otherwise. The teachers who would be required to be vaccinated were not advised of the proposed change directly, or through the required public notice. Students and parents were not advised. The School Committee agendas indicated that there would be changes to how COVID-19 would be handled as schools were being required to reopen by the state, but the notices were not clear or specific that mask mandates or vaccine mandates were being imposed. Barrington’s requirement of vaccinations (right or wrong) would have been particularly controversial as no other community required vaccinations for teachers.”

Greg Piccirilli, the attorney for the teachers, said the court has not yet ordered a remedy or imposed sanctions on the Barrington School Committee for the violation. He said the court has scheduled a hearing for June 21 to do just that.

Piccirilli said it is possible that the judge could rule the vaccine mandate policy void and the teachers’ terminations void as well.

“It’s possible, we’re certainly arguing for that,” he said. “One thing flows from another.”

Piccirilli said there are previous cases where the courts have done just that, and ordered fired employees to be given their jobs back.

The ruling by Judge Lanphear details the damages to the teachers (the plaintiffs) resulting from the improperly noticed school committee meeting agenda, where the board voted to enact the vaccine mandate policy.

Read the full written decision of the Court here.

“For the three plaintiffs, who claimed religious exemptions to the mandate, the vaccine mandate was not just controversial, it cost them their jobs,” Judge Lanphear wrote. “Moreover, they were the ones who would be subject to the nonvoluntary and controversial vaccination injections. The Plaintiffs refused to take the vaccines, were suspended and then terminated, with little recourse.”

Piccirilli said it is worth noting that Wednesday’s ruling was not the first time in recent history that the Barrington School Committee, which also includes Megan Douglas, Erika Sevetson, Amanda Basse and Patrick McCrann, has been found in violation of the state’s Open Meetings Act.

Piccirilli cited a recent decision by the Rhode Island Attorney General’s office in the case of Ford vs. Barrington School Committee, where the committee failed to provide proper notification of a meeting that featured a transportation policy change.

“This isn’t the first time this year they’ve been punished,” Piccirilli said. “They had just been warned by the Attorney General.”

Piccirilli told another media outlet that he had considered filing the recent OMA complaint (DiOrio vs. Bae) with the AG, but thought he might receive a faster ruling with the Superior Court lawsuit.

Piccirilli said he has also filed multiple discrimination cases for each of his clients (DiOrio, Hines and Thurber) against the Barrington School Committee, the NEA national teachers union, the NEA Rhode Island, and the NEA Barrington.