Mt. Hope wrestlers look sharp as they prep for the state tournament

Mt. Hope wrestlers look sharp as they prep for the state tournament 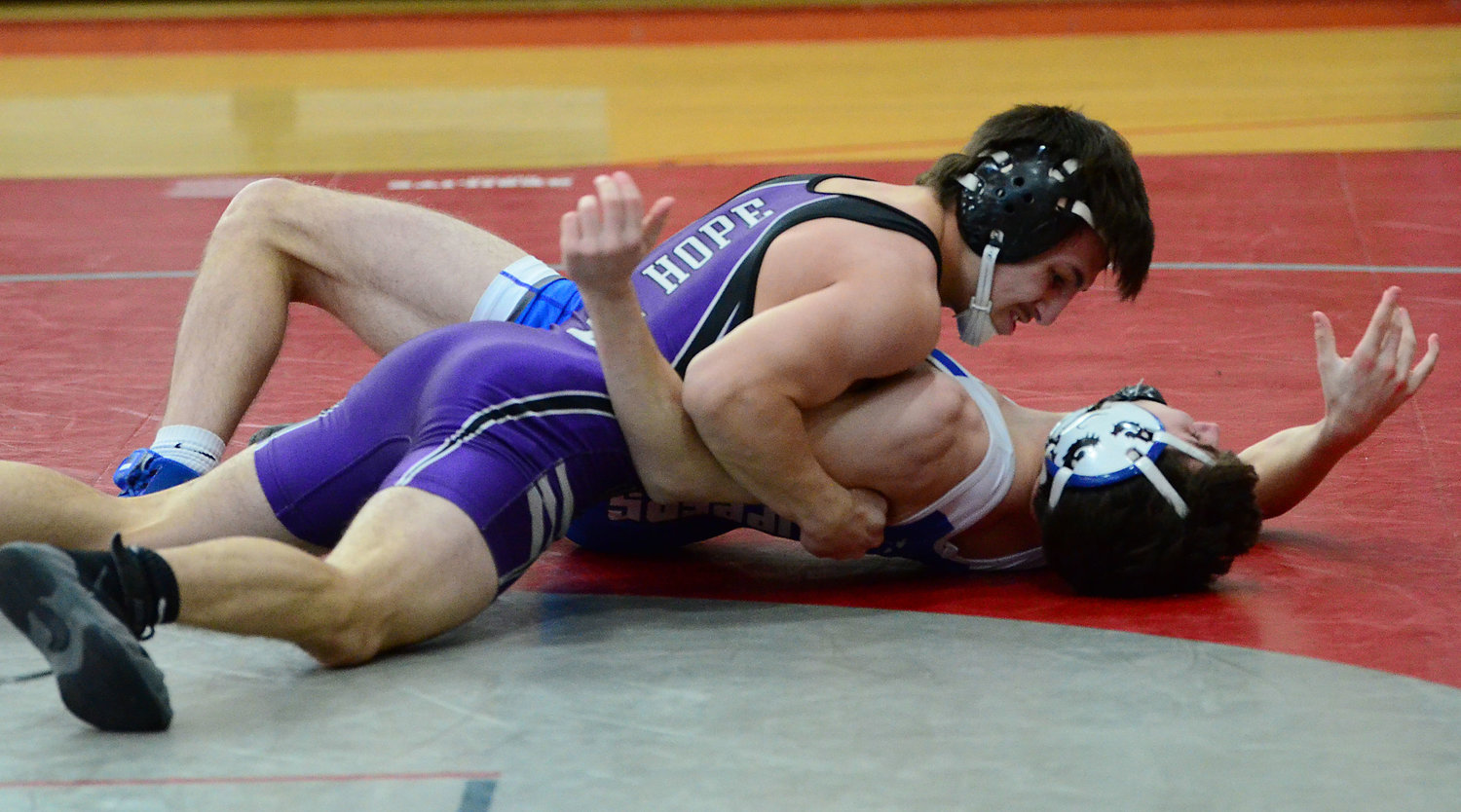 113 pound junior Nick Gomes won all three of his matches at the quad meet, including this match as he held down Cumberland’s Brady Gillis to win a 7-4 decision. Gomes also won by default against East Providence and won a 7-5 decision over Hope’s Jonatan Jimenez. 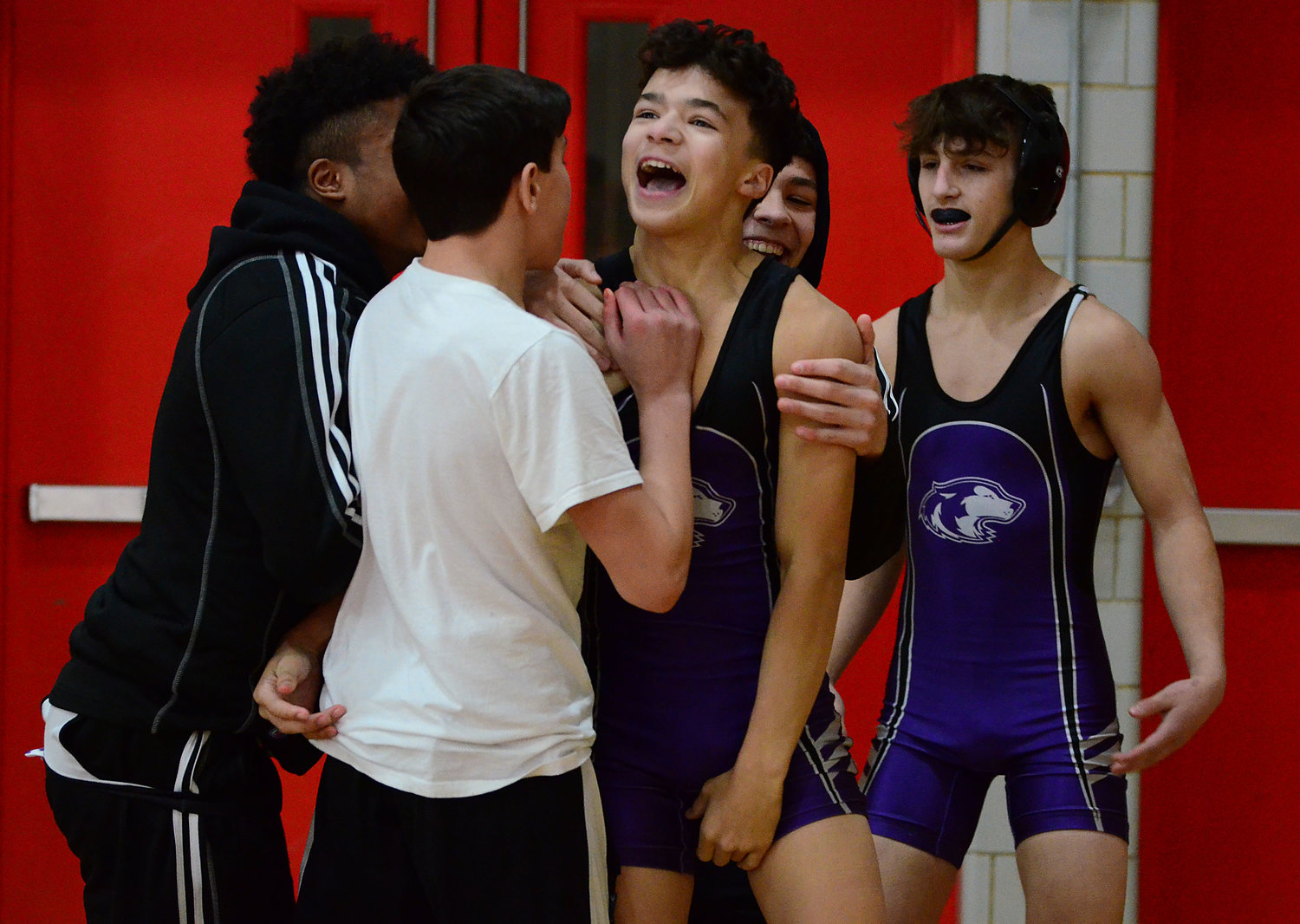 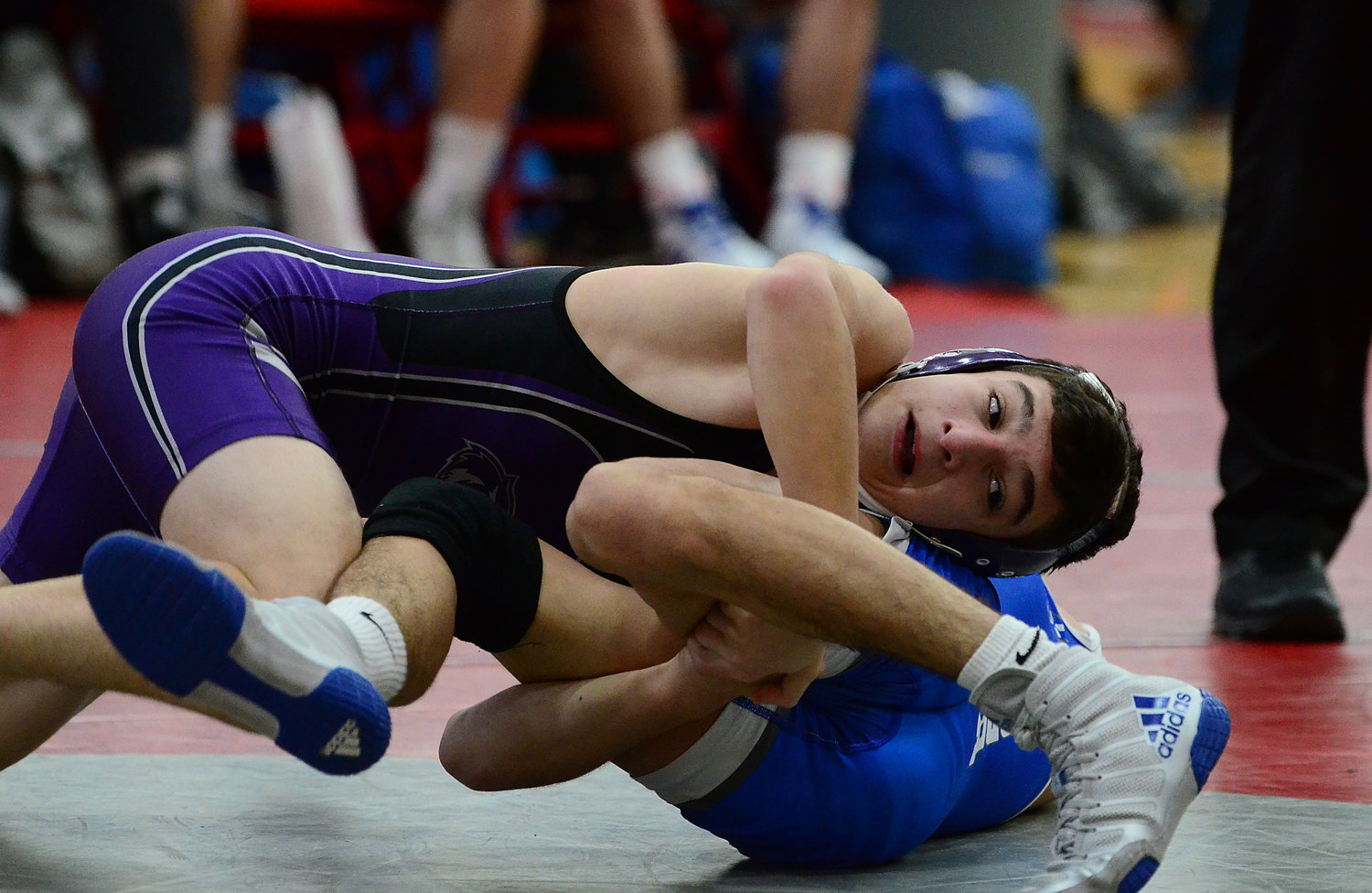 106 pound freshman Carson Correia wraps up the legs of Cumberland’s Corbin Dias during a quad meet at East Providence High School on Monday. Correia went 1-2 during the meet, losing decisions to Dias and to Hope’s Nicholas Torres and winning a decision over Sean Sullivan of East Providence. 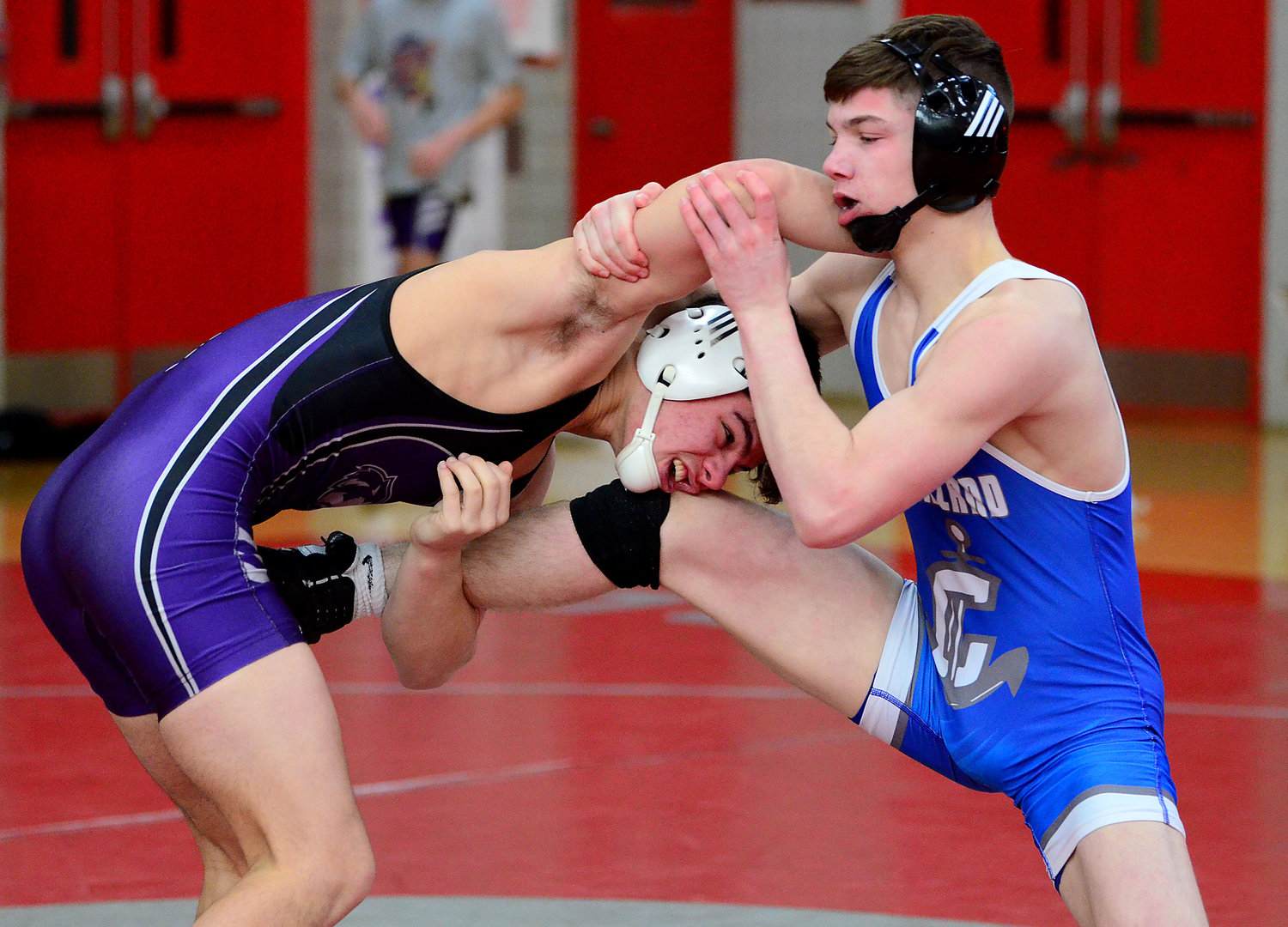 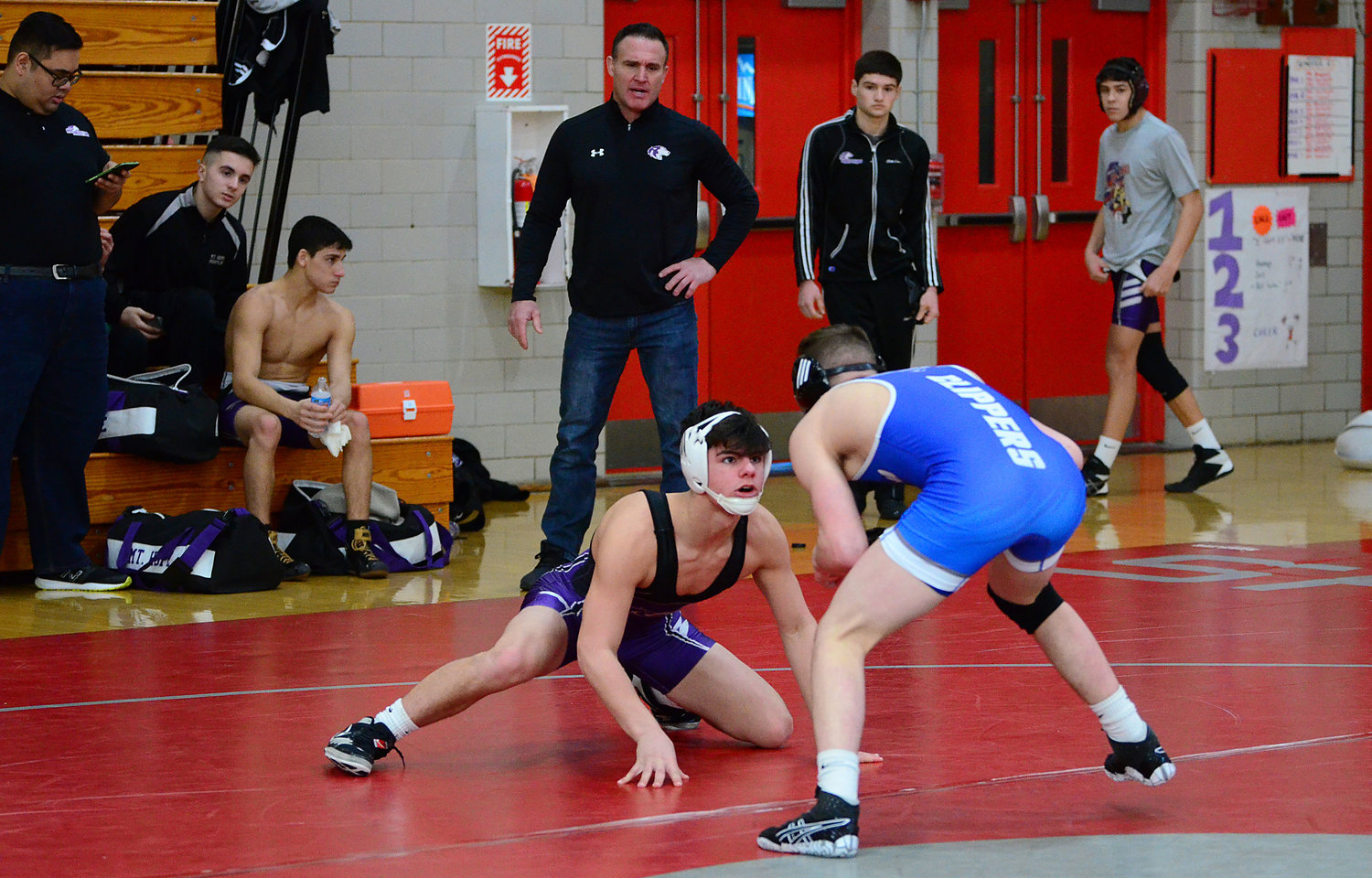 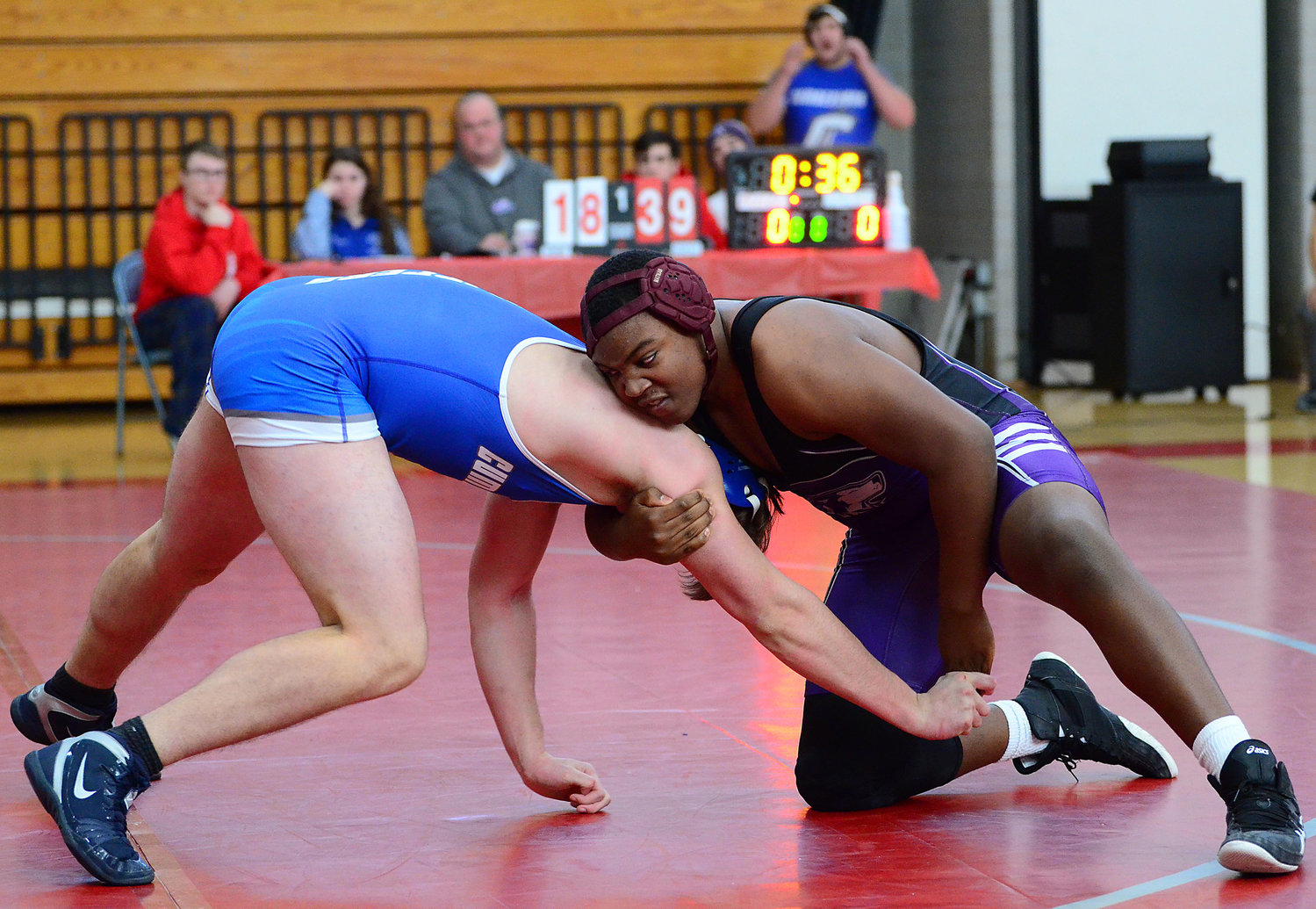 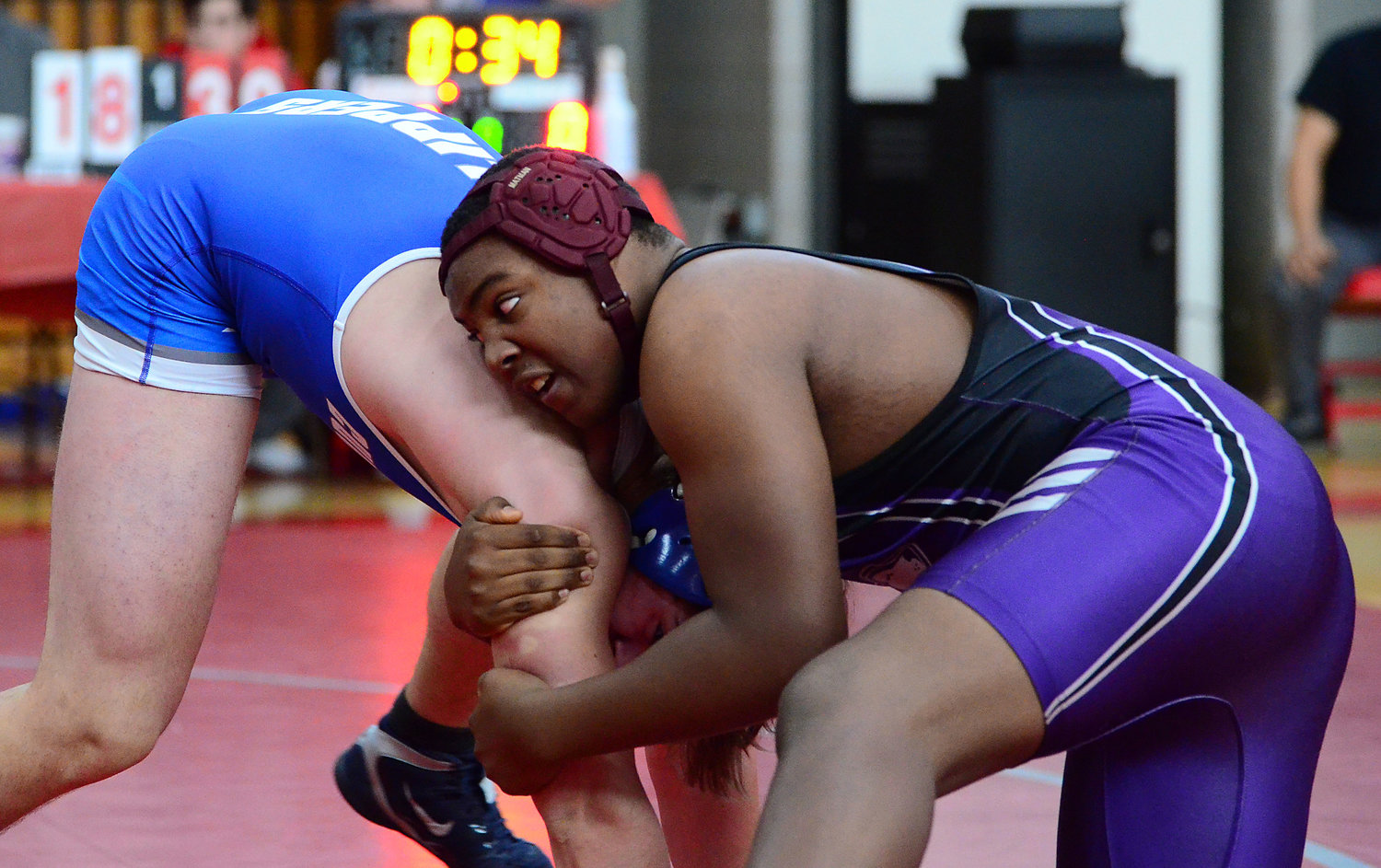 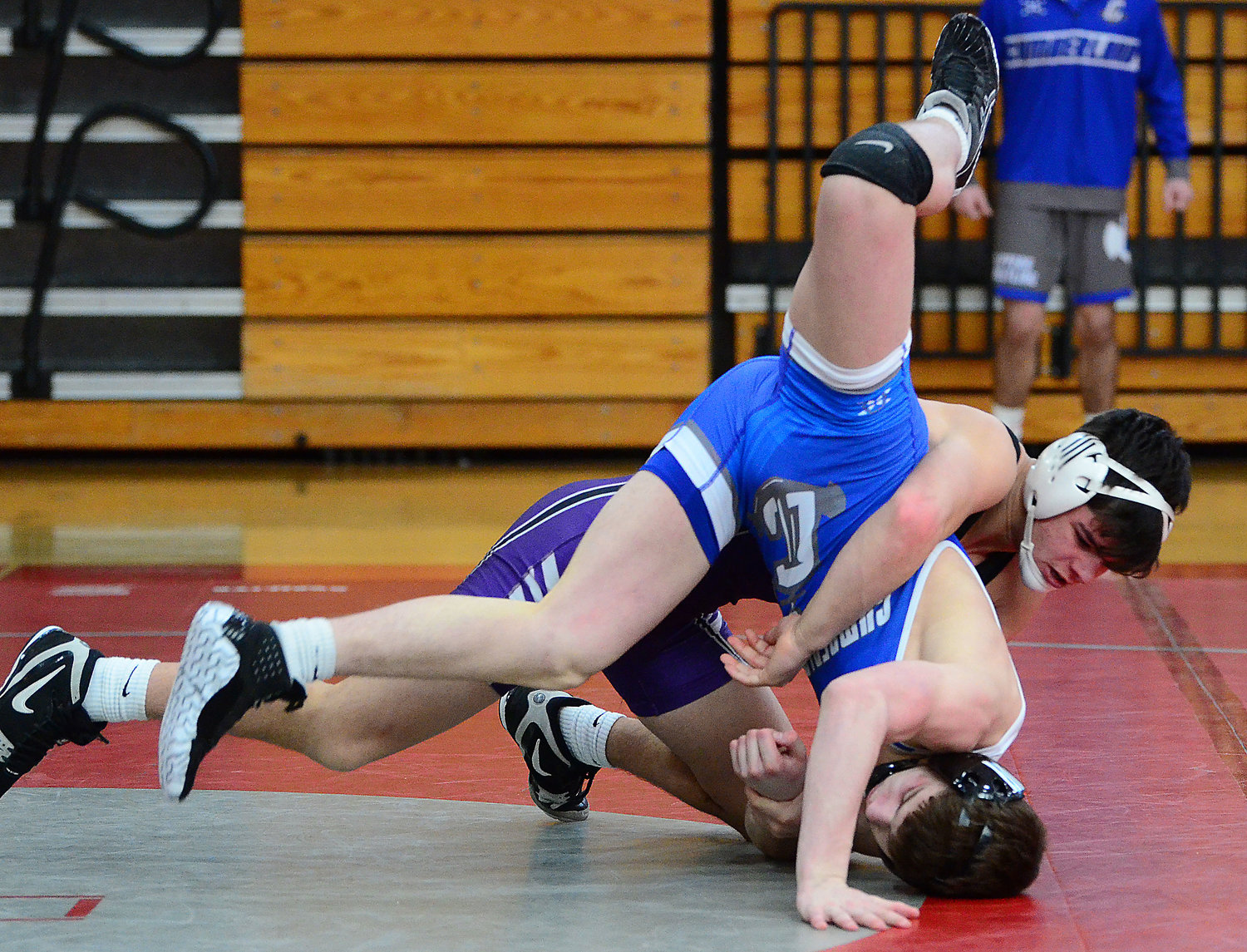 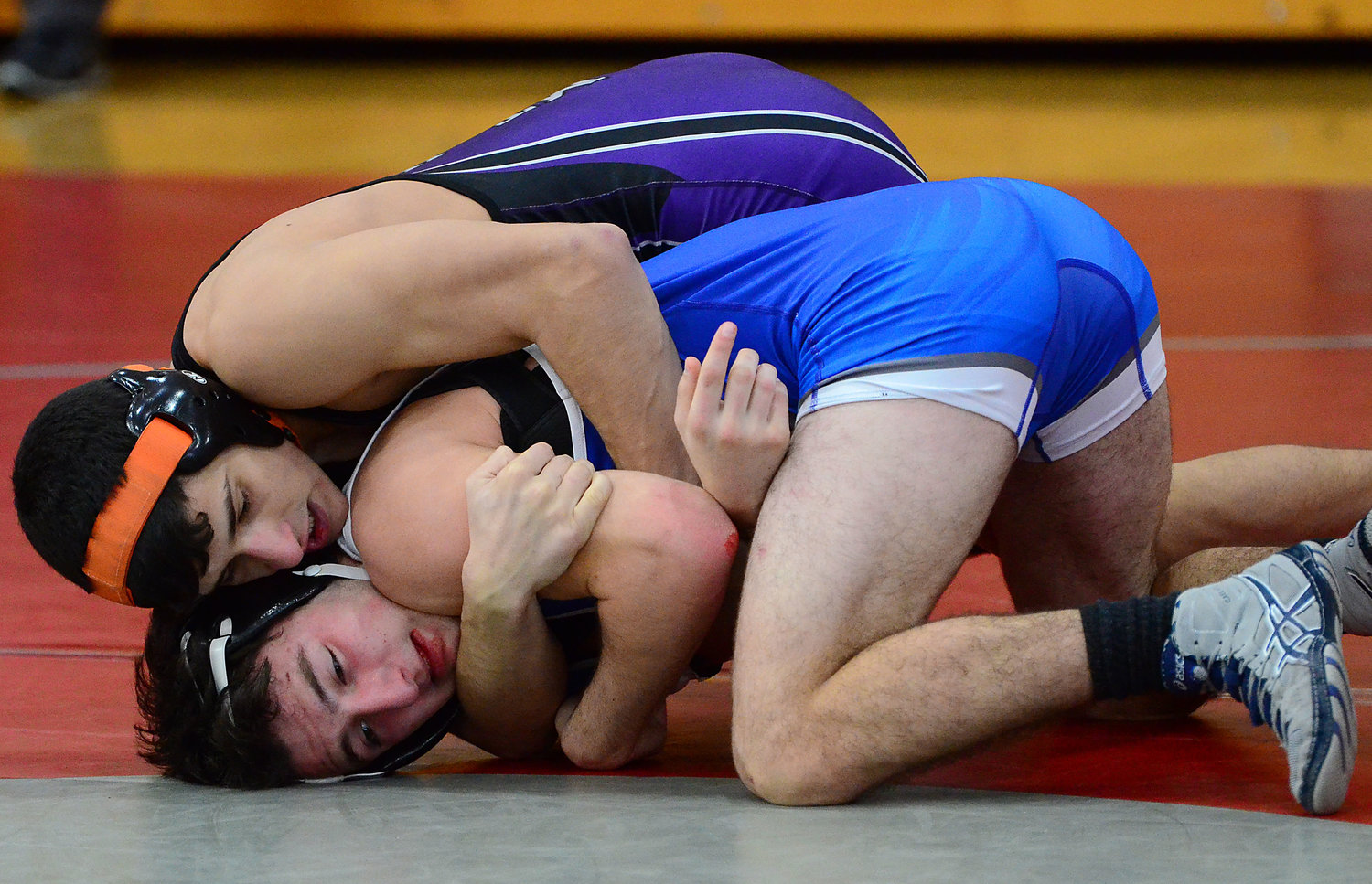 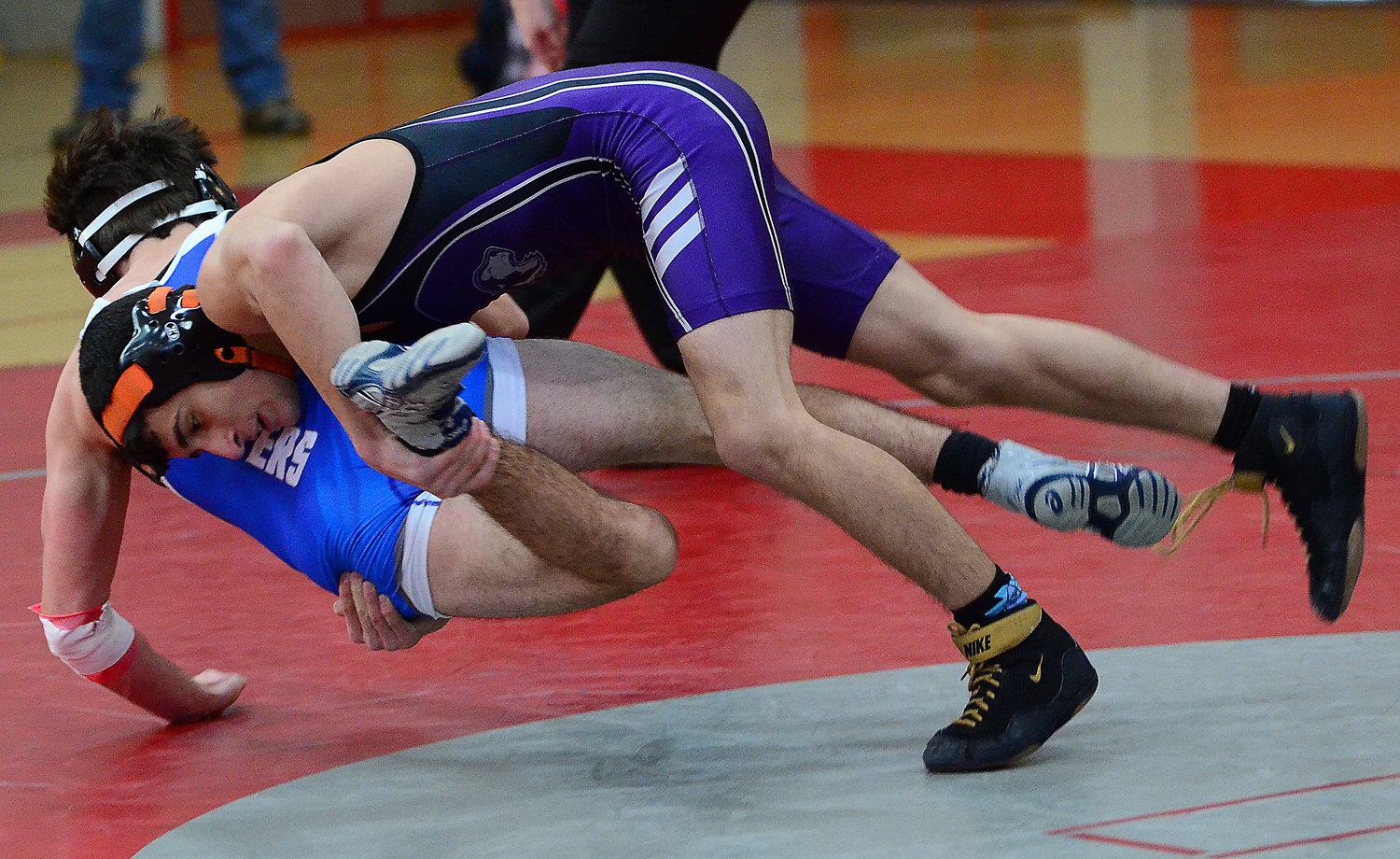 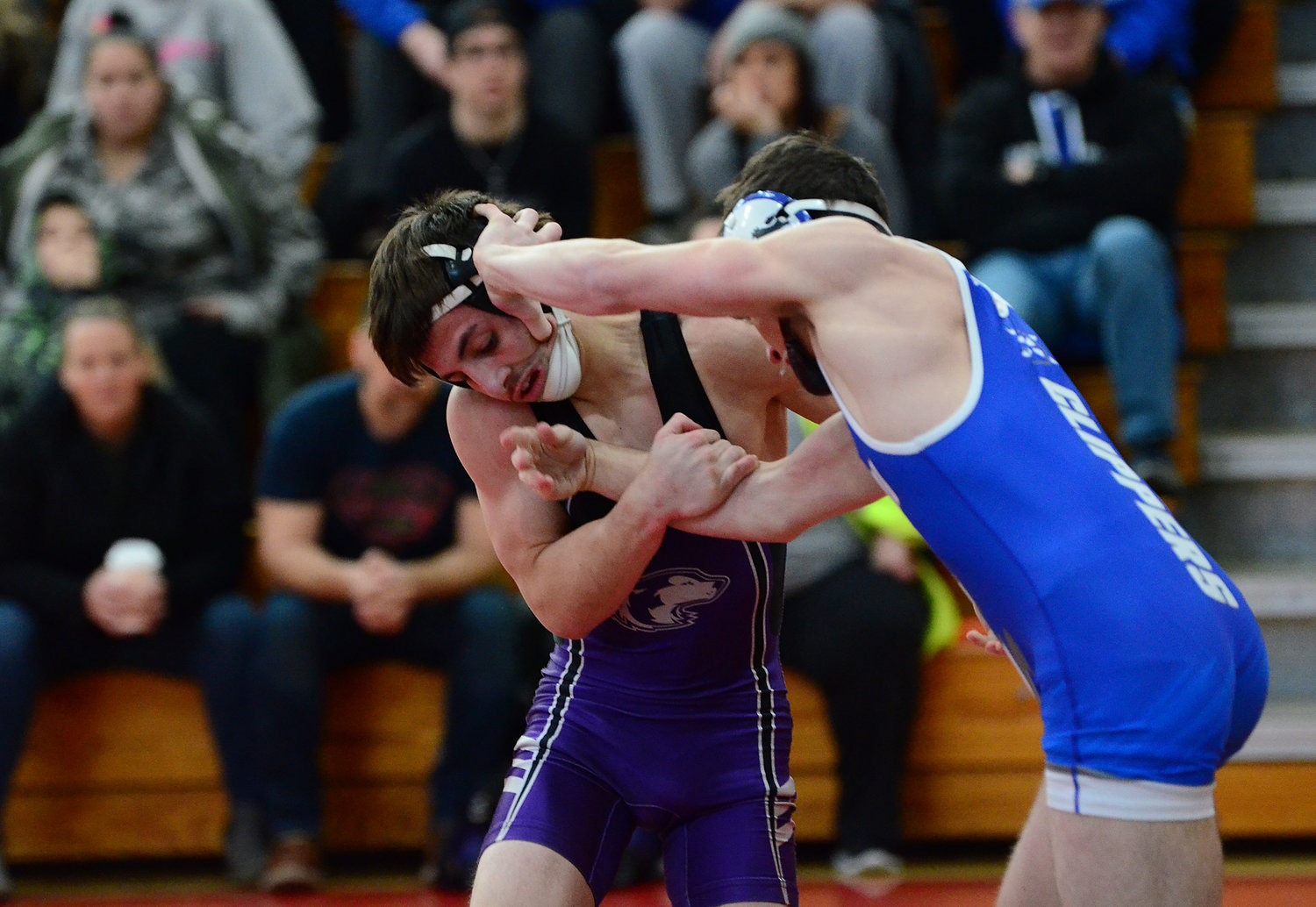 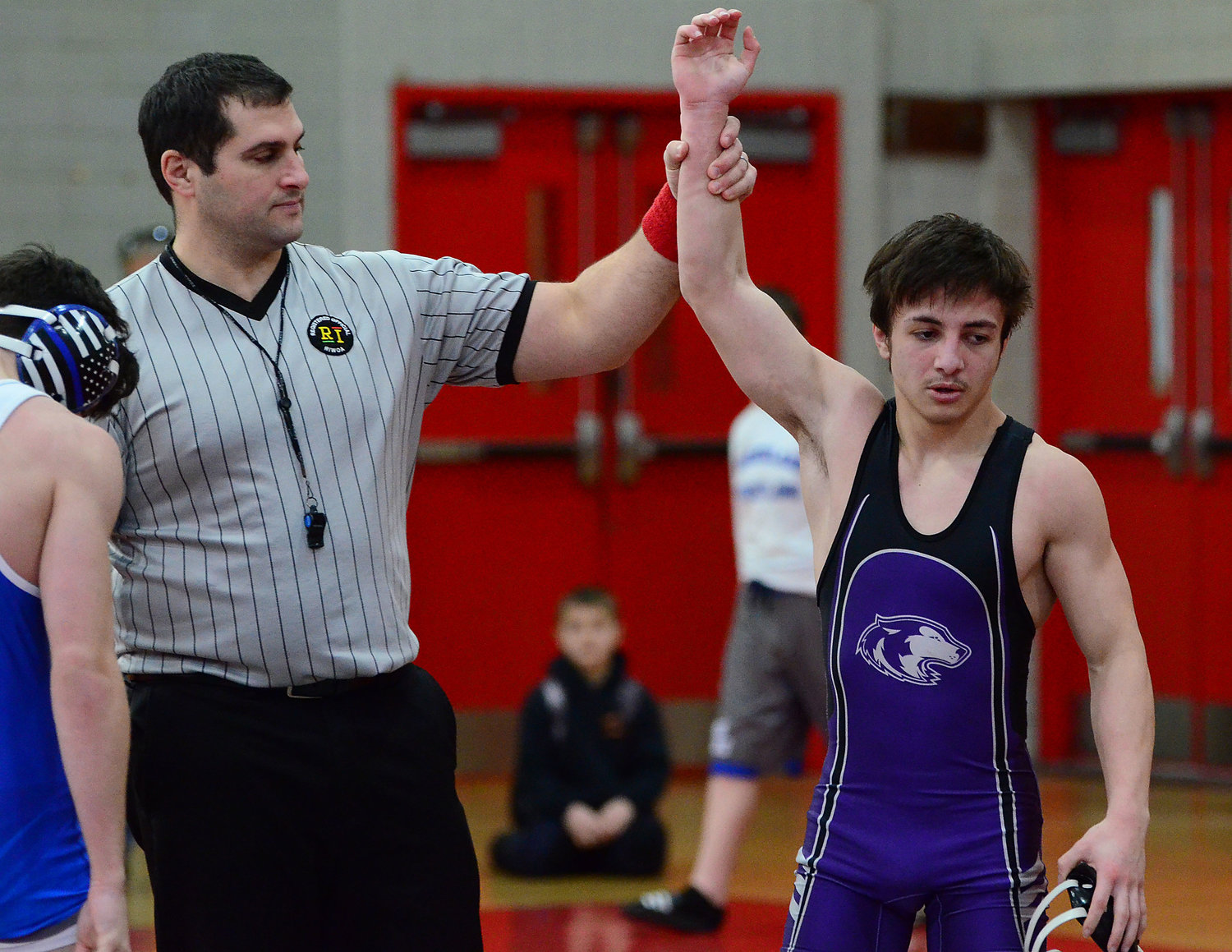 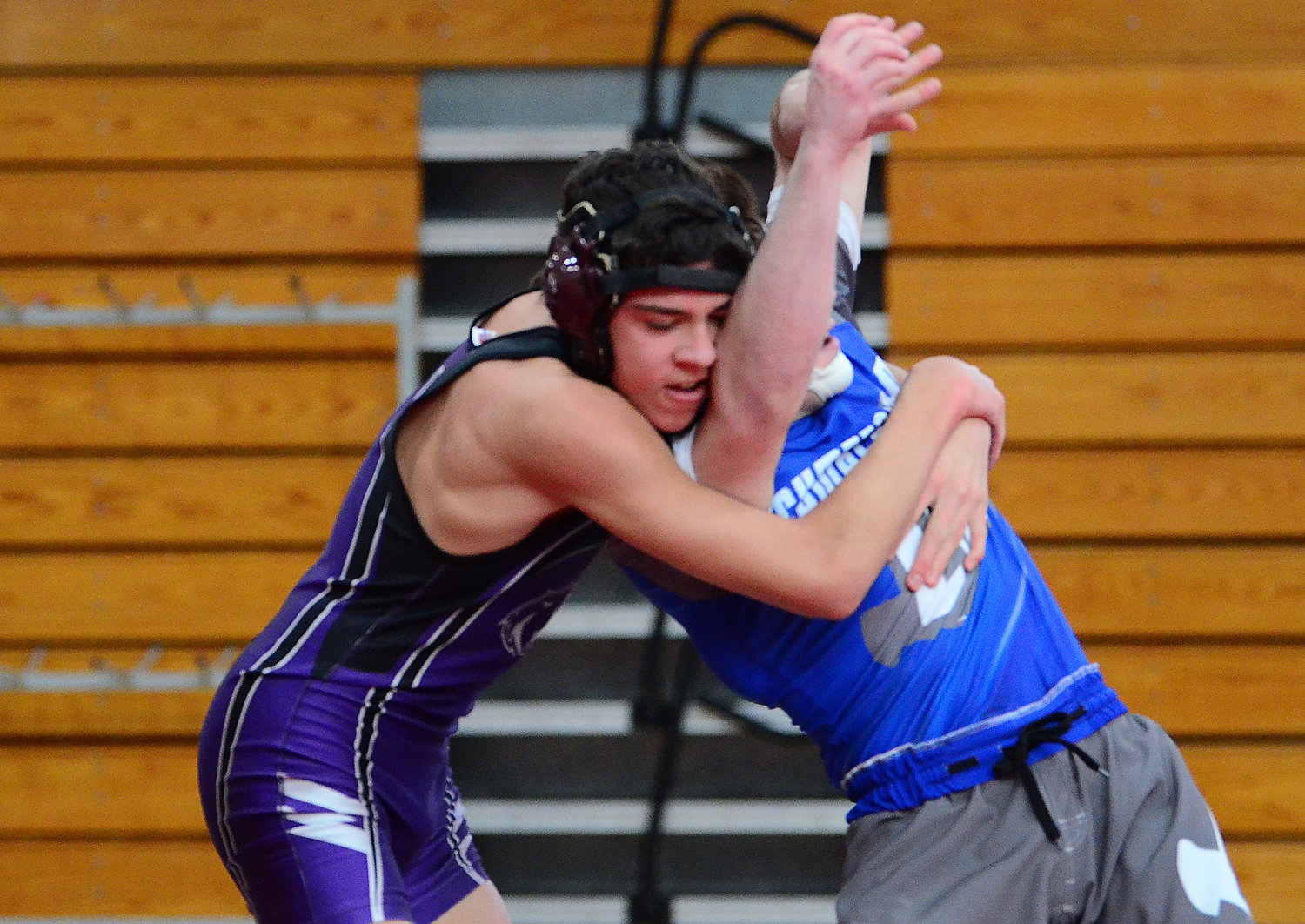 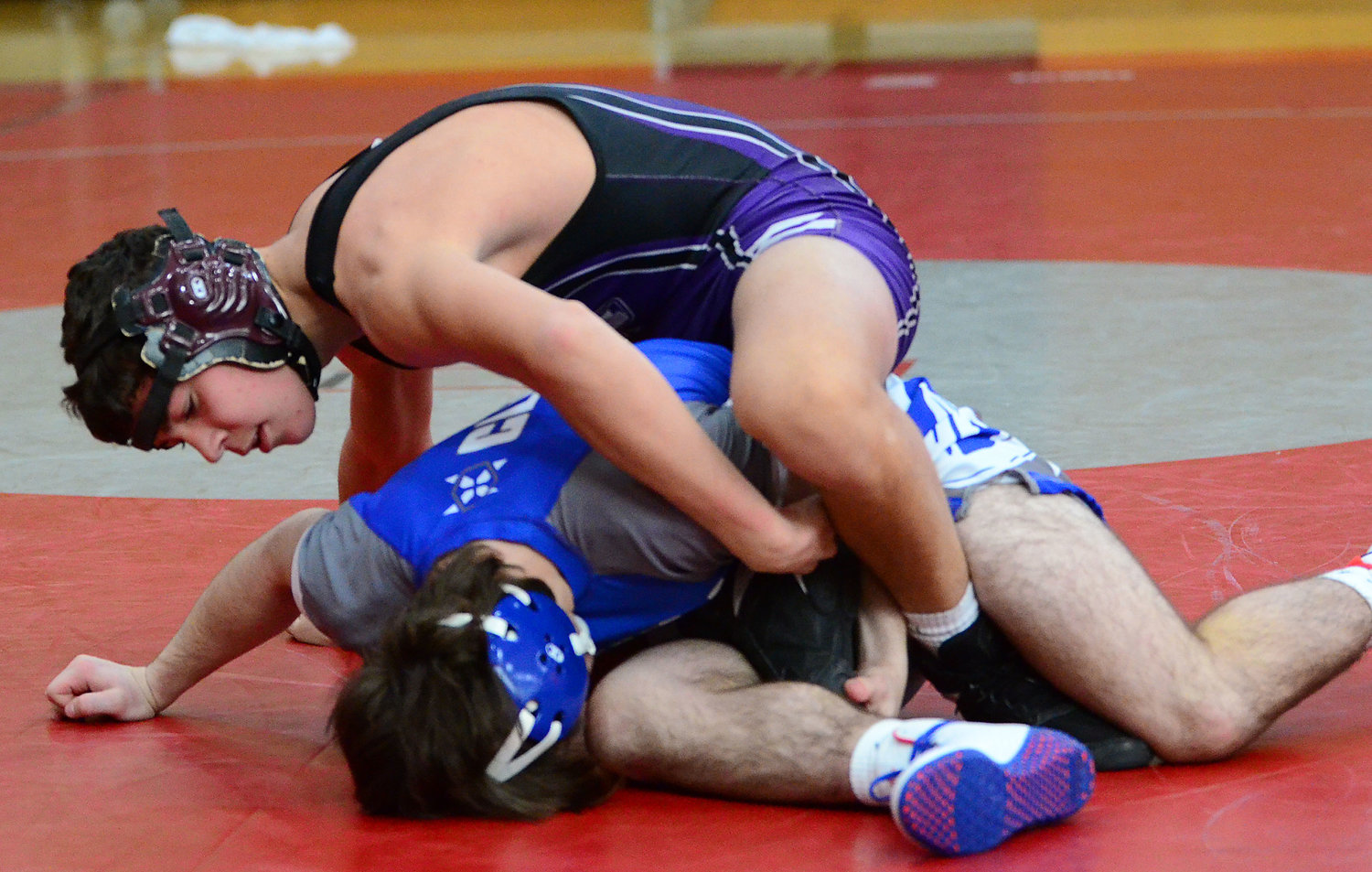 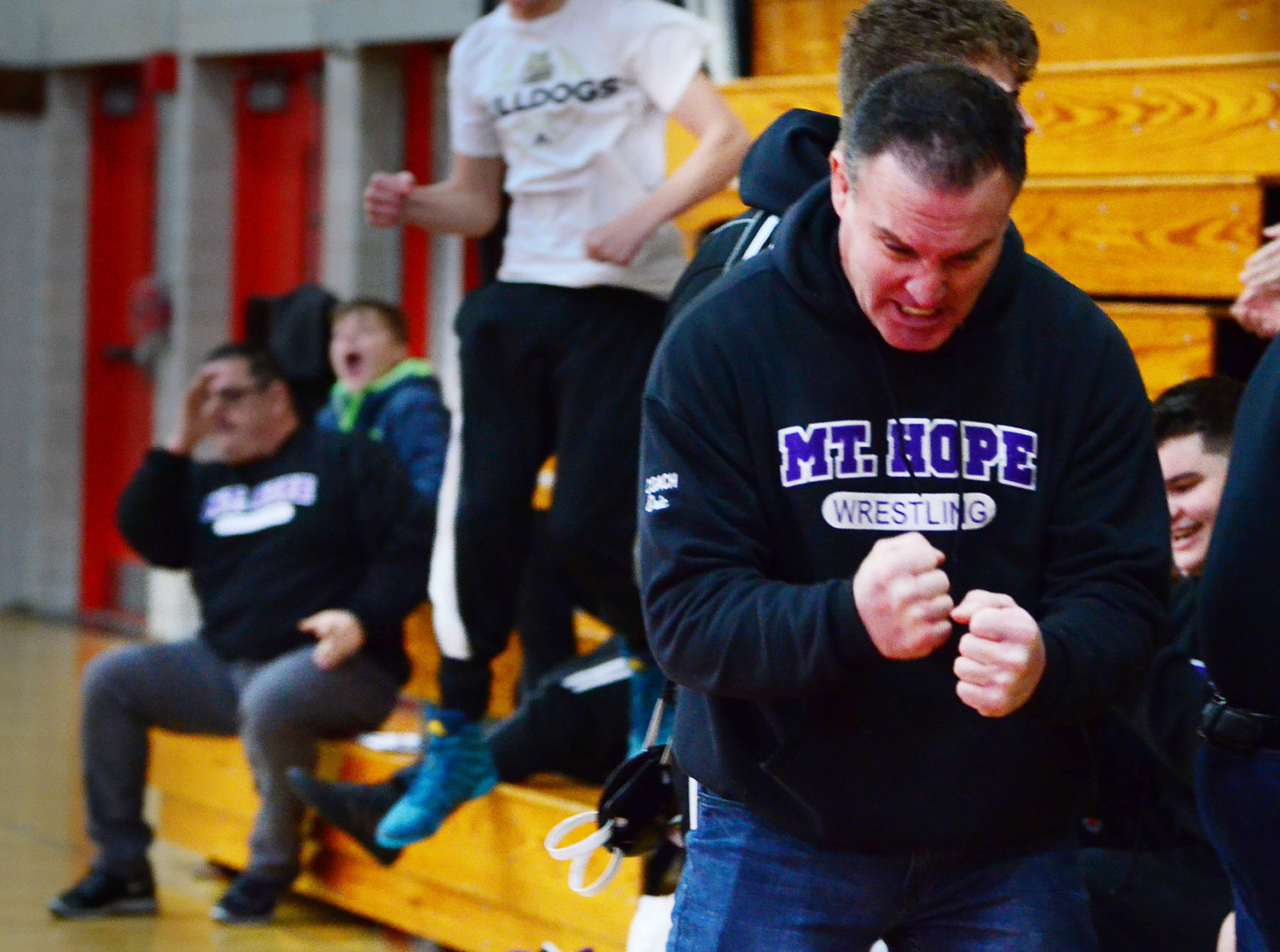 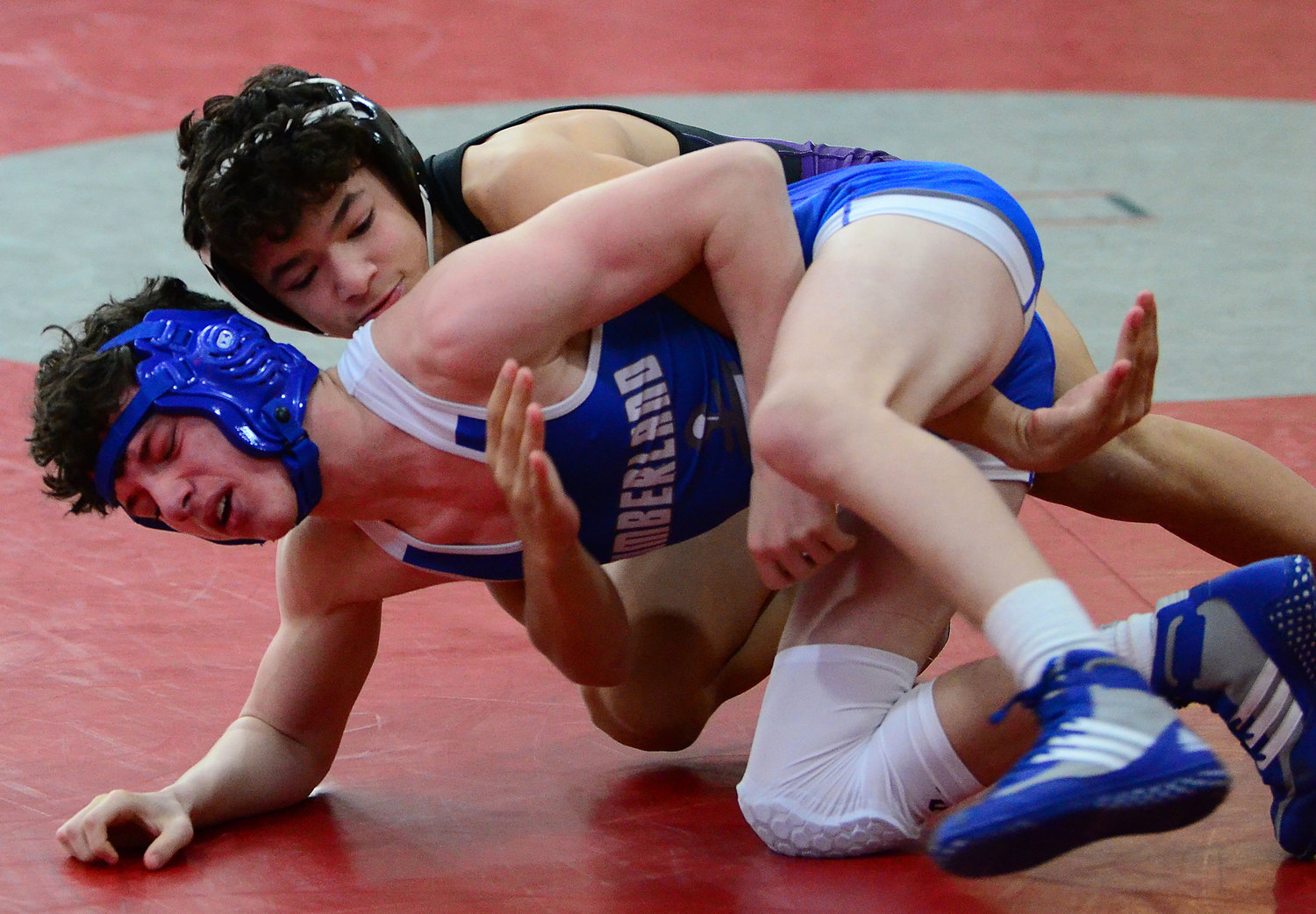 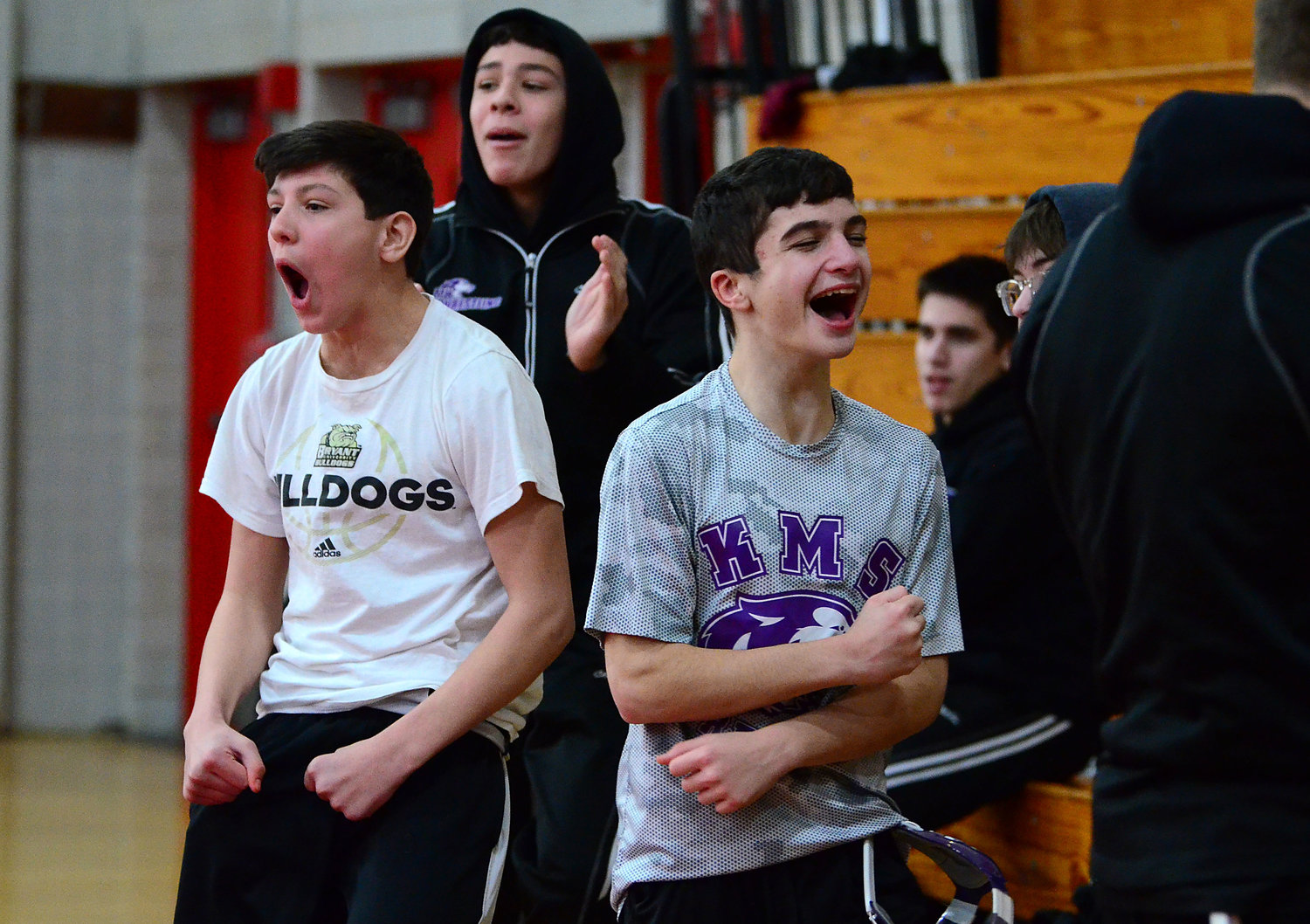 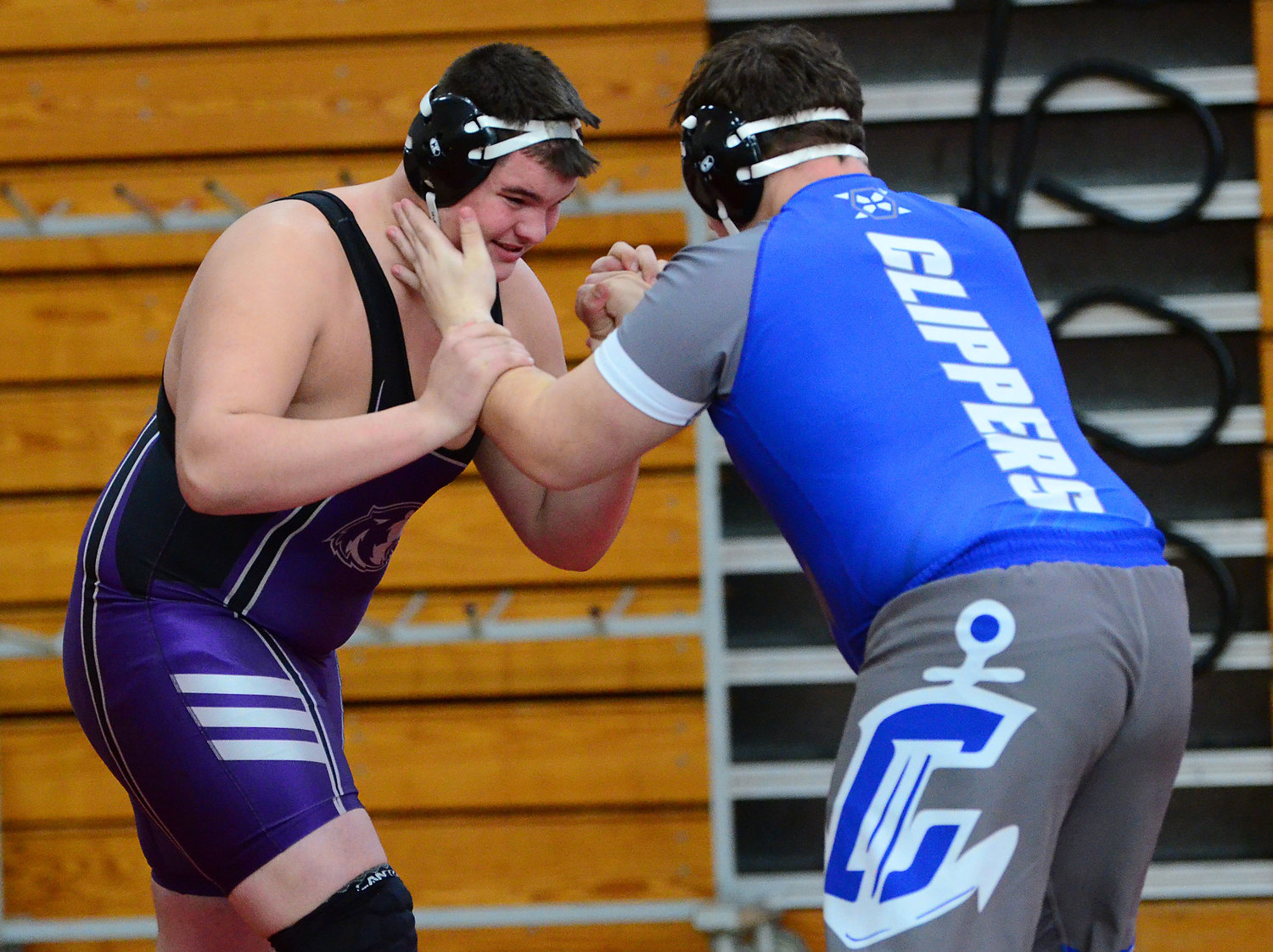 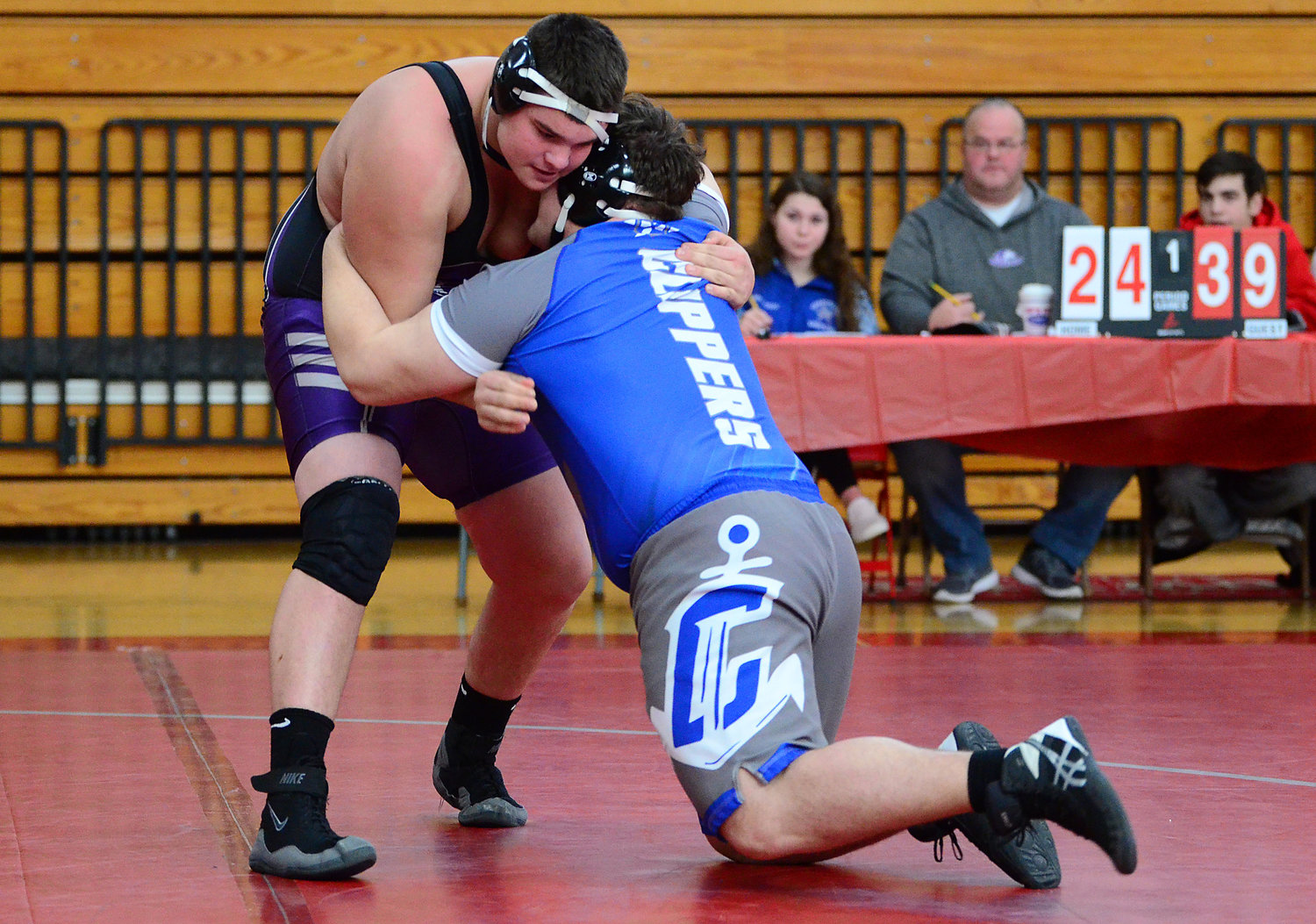 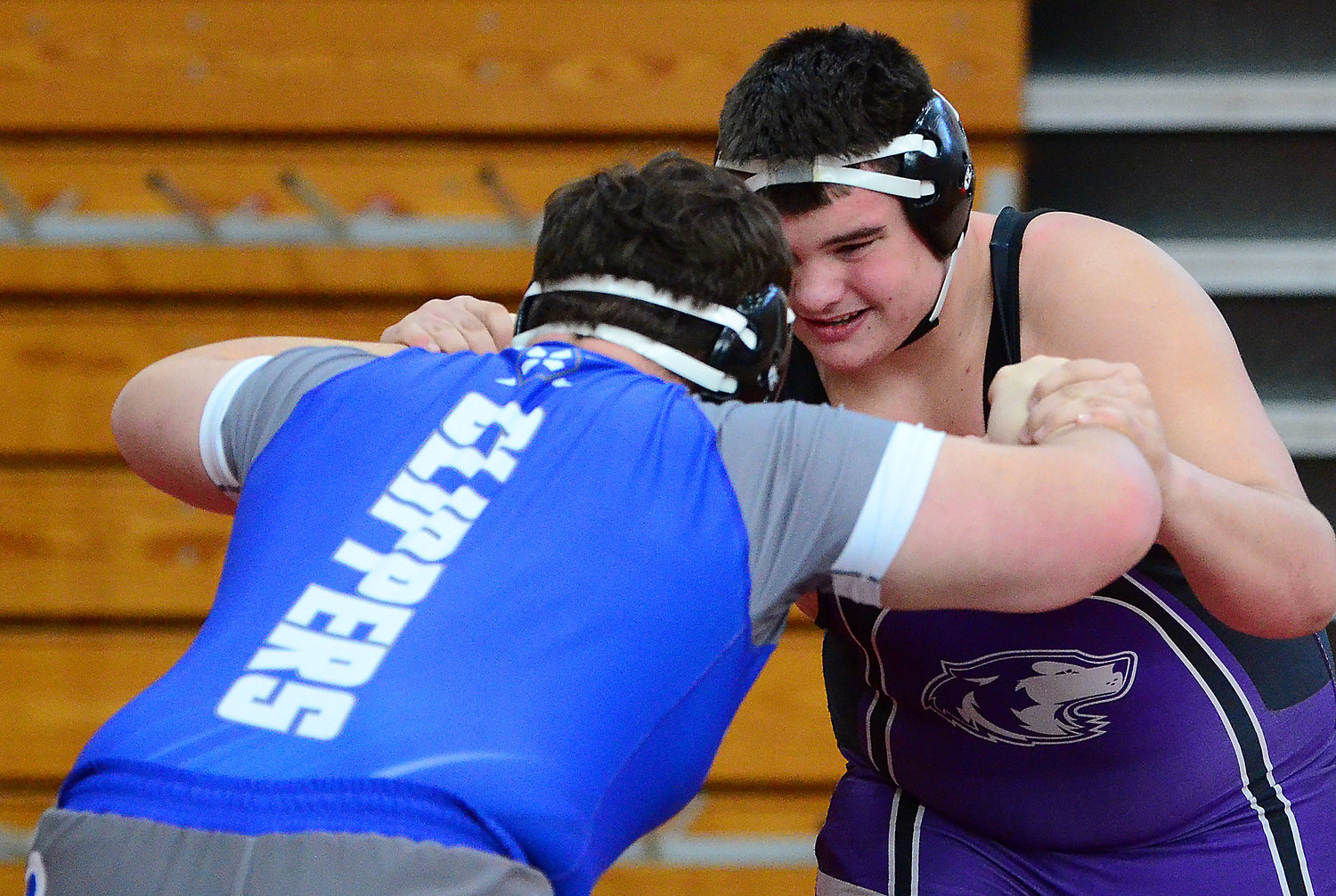 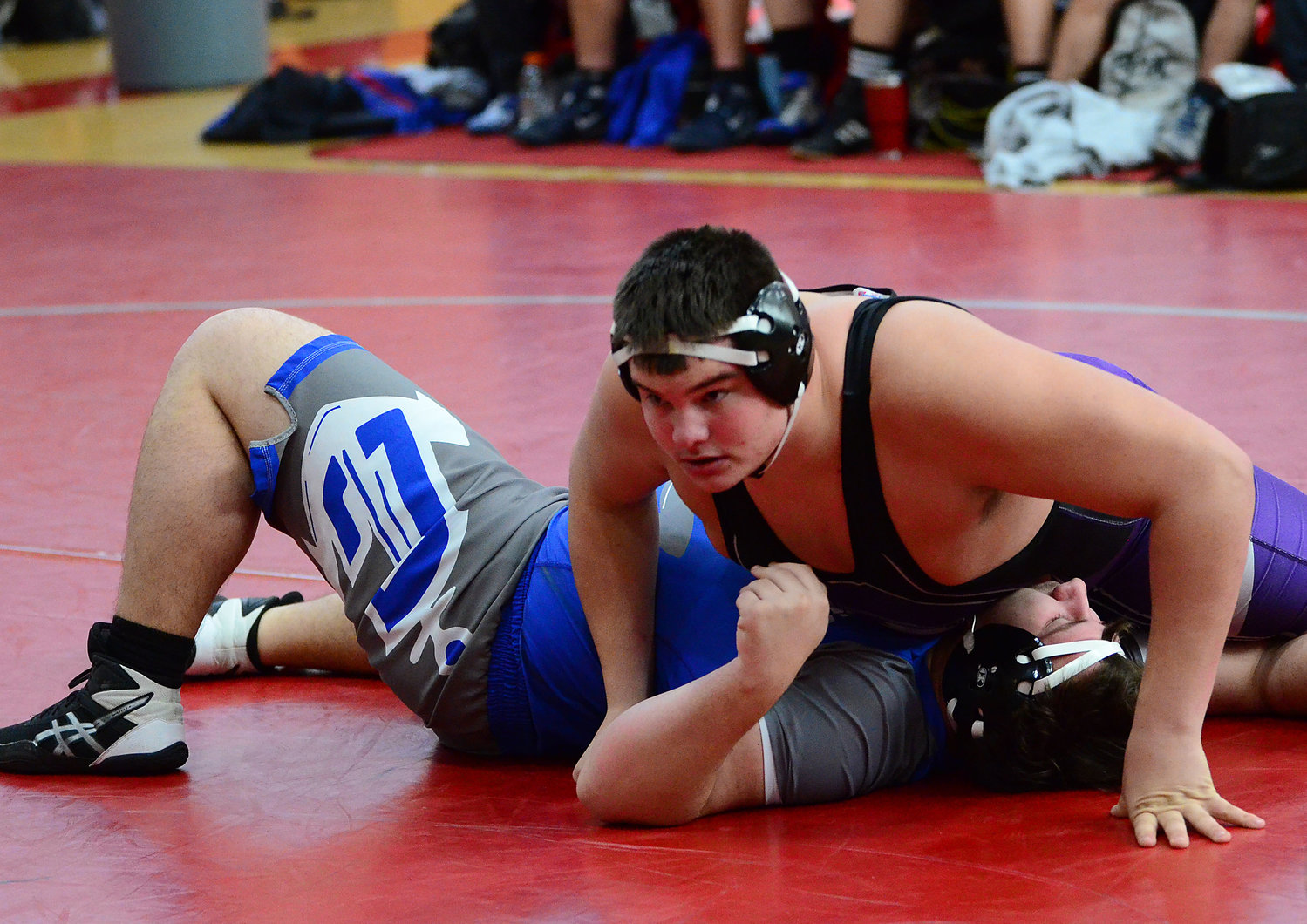 Third-year head coach Eric Francis is looking forward to seeing how his team fares at the state championship in February. “I’m really impressed with these kids. They are always ready to wrestle. They work hard and they never complain,” said coach Francis.

The Huskies hosted a 12-team dual meet earlier in the season, and coach Francis and the team have traveled a lot to tournaments in Massachusetts. “We just try to keep the guys busy,” he said.

While the Huskies are still a young team, they have a lot of experience. “We are competing very well with most teams in the state,” Francis said.

Junior Cory Grifka (182 pounds) is the team’s best and most experienced wrestler. Last season Grifka was undefeated with a record of 45-0 and won the Rhode Island state championship, pinning LaSalle’s Gregory Gregorian in two minutes and fifty-three seconds. Grifka placed at the nationals last season and is currently on track to go undefeated again in 2020. Earlier in January, he won his 100th career match, according to a Mt. Hope Wrestling Facebook post. “Cory has dominated every match this year. He has pinned and tech falled 99 percent of his opponents,” said coach Francis. This season Grifka pinned his way through the prestigious Marshfield tournament, boasting many of New England’s top wrestlers. “If he can win next year, he would be one of only two or three wrestlers to have ever done that,” said coach Francis adding, “It would be quite an accomplishment.” Grifka went 3-0 at the quad meet. He won by default against Cumberland, pinned Robert Amaral of East Providence and won by decision over Hope’s Jon Feliz.

“Cory was one match away from placing All-American at nationals last year,” said coach Francis. “He’ll be right in the hunt this year. And he’s bigger than he was last year. He’s a solid 182 pounds. The future looks good for him. We just got to keep him healthy.”

Sophomore heavyweights, 6-foot 4-inch, 285-pound Atley Jenness and 220-pounder Patrick Pitts, have had strong seasons for the Huskies. Jenness made the team as a freshman last year, when Coach Francis saw raw talent in a wrestler who combined quickness with his size, strength and athleticism. Jenness grew taller and leaner this year and may be even more imposing to his opponents.

“Atley has been incredible this season. He placed fifth at Marshfield. He’s taller and leaner this year, and he has wrestled really well,” said coach Francis. Jenness pinned both Cumberland’s Zach Refino and Eric Robinson of East Providence at the quad meet. He lost to Hope’s Edison Guarcas, a top-five wrestler, by a 4-1 decision. “Atley’s a heck of an athlete.”

New assistant coach Ryan Fazzi, a Rutgers heavyweight wrestler, gets the credit from coach Francis for the success that Jenness and Pitts have had this season. “Coach Fazzi can show them the heavyweight wrestling style,” said coach Francis. And it has paid off. Pitts has also stepped up his wrestling this season. The 220-pounder won all three of his matches at the quad meet, pinning Cumberland’s Adam Barboza. Pitts won a 4-1 decision over Kianu Duarte of East Providence and a 14-4 decision over Hope’s Frank Burgos. “He moves really well,” coach Francis said. “Pat and Atley were one match from placing at the state’s last year.”

Last year, 106-pound Nick Gomes, as a sophomore, won the Marshfield tournament and placed second at the state championships to Coventry’s Joziah Fry. This year, as a junior, he’s a hopeful to get back to that level. Now wrestling at 113, he won all three matches at the quad meet. He won a 7-4 decision over Brady Gillis, won by default against East Providence and won a 7-5 decision over Hope’s Jonatan Jimenez.

Liam Mallon placed third in the state last year at 113 pounds. He is wrestling at 126 pounds as a junior, and he won all three of his matches at the quad tournament. Mallon beat Cumberland’s Dominick Passanante by a 6-3 decision, pinned Hope’s Damien Roderick and won by default against East Providence.

Coach Francis credits Kickemuit Middle School coach Jay Grifka, whose 2019-2020 team is undefeated going into the state championship, for the readiness of his freshmen and many of the Mt. Hope wrestlers. “Freshman Carson Correia is a standout,” said coach Francis. “He’s been almost a guaranteed win for us.” The 106-pound freshman went 1-2 during the quad meet. He lost a 5-0 decision to Cumberland’s Corbin Dias, won a 7-1 decision over Sean Sullivan of East Providence and lost a 4-2 decision to Hope’s Nicholas Torres.

Coach Francis has coached many years in the Bristol Warren wrestling programs and also at Somerset and he knows how valuable it is to have a feeder program. “You see how much a middle school program feeding a high school program can be when it’s successful. They are doing a phenomenal job down there. It makes it much easier just to start fine tuning things,” coach Francis said. He’s hopeful that the hard work that the team has been putting in will pay off at the state tournament. “It could be a good year,” coach Francis said.

152 pound Anthony Brooks was pinned by Cumberland’s Aidan Faria, but he won his next two matches, pinning Lucas Bianco of East Providence and winning by a 19-10 decision over Hope’s Imanol Tavares.

145 pound Riley Furtado lost a 3-1 decision to Cumberland’s Mat Mcguire and a 5-3 decision to Hope’s Luis Lopez, but beat Ismael Frias of East Providence by a 2-0 decision.

138 pound Patrick McGovern was pinned by Cumberland’s Mason Lynch and lost a 7-3 decision to Hope’s Parris Cooper, but he pinned Jacob Francis of East Providence.

132 pound Brock Pacheco lost a 1-0 decision to Colby Reilly of Cumberland, but won his next two matches. He beat Jacob Poore of East Providence by 7-0 decision and pinned Hope’s Jovan Padilla.