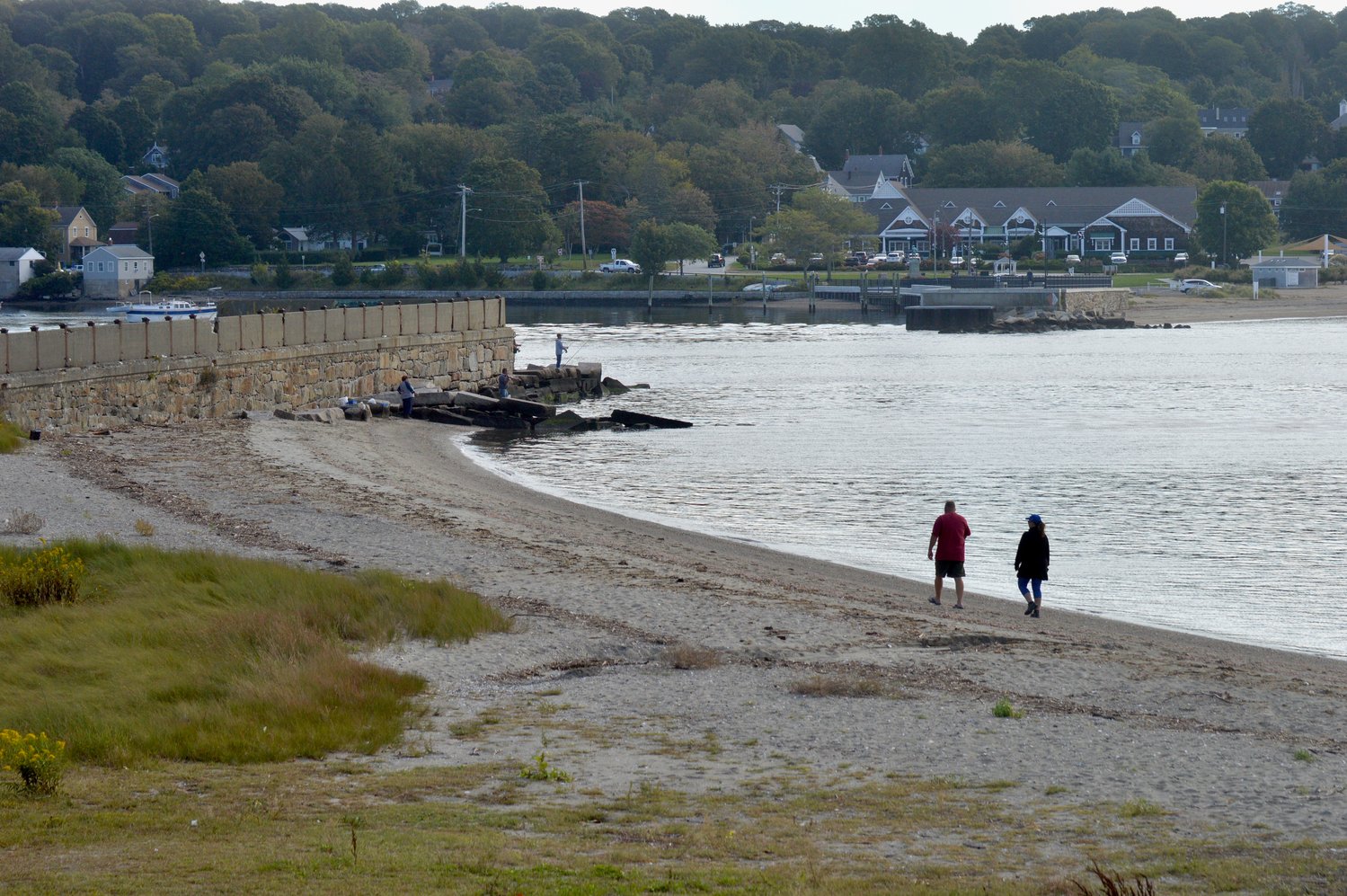 The town is seeking funding for improvements to the Stone Bridge abutment and adjacent Teddy’s Beach. Tiverton’s improved bridge abutment and waterfront park can be seen in the background.
Jim McGaw
Posted Thursday, October 14, 2021 11:43 pm
By Jim McGaw

PORTSMOUTH — The Town Council voted unanimously Tuesday, Oct. 12, to approve a resolution that urges the General Assembly to pursue funding to develop a new waterfront park recreational facility at the Stone Bridge abutment and Teddy’s Beach.

The resolution was drawn up after local resident John Vitkevich said the current bridge abutment, which partially collapsed in 2019 and broke off into the Sakonnet River, remains in deplorable condition. Part of the property was fenced off by the R.I. Department of Transportation (RIDOT), which controls the abutment. The adjacent beach, which is a target of litterbugs, is in rough shape itself, he added.

Vitkevich said he hopes the town can receive funding to transform the area into something like Tiverton has on the other side of the river. The bulk of the money to develop that park — roughly $3 million — came from state and federal funds, with private fund-raising adding another $60,000, he said.

According to the resolution, in 2019 RIDOT’s director “publicly stated that RIDOT planned to work with the R.I. Department of Environmental Management (RIDEM) to pursue renovating, improving and transforming the Stone Bridge abutment and Teddy’s Beach into a waterfront park for public use, similar to the Stone Bridge abutment and Grinnell’s Beach facility in Tiverton.”

However, there’s been no apparent progress by RIDOT, RIDEM or any other state departments, the resolution states.

The resolution will be forwarded to local state legislators, the town’s federal delegation, RIDEM and RIDOT.

Vitkevich thanked the council for its support. “I’m just excited to get this done,” he said.

In other business, the council unanimously approved a memorandum of agreement (MOU) between the town and the local police union to implement a change in department structure that varies from the current collective bargaining agreement (CBA) that began July 1, 2020 and ends June 30, 2023.

The change to the CBA will better provide an officer in charge at every shift by creating two additional captain positions effective July 1, 2022, according to both parties, which negotiated the revision. The salary for those positions will be equal to that of the lieutenant salary under the CBA. On a bi-weekly basis beginning July 1, 2022, the town will provide non-pensionable stipends to captains ($10,000 annually per position), lieutenants ($1,100), sergeants ($2,500) and detectives ($1,500).

When the members promoted to the new captain positions first become retirement eligible, their benefit pension shall be capped at 60 percent of the highest three years of salary, not including the aforementioned stipend toward that pension. All further retirement contributions past the first opportunity to retire will be part of a defined contribution 401K plan.

The total cost of the changes over the life of the contract is slightly over $167,000, according to financials provided by the town.

Larry Fitzmorris, head of the taxpayer watchdog group Portsmouth Concerned Citizens, raised an objection before the vote, saying the agenda item wasn’t properly posted. The agenda item was listed as “Police MOA,”which Fitzmorris said was an insufficient description because it didn’t specify the council would be taking action on any changes between the town and union.

Town Solicitor Kevin Gavin, however, said he believed the agenda item as posted was sufficient.

The council approved a five-year lease agreement, from Oct. 1 of this year through Sept. 30, 2026, between the town and Newport Polo, Inc. for the 28.7-acre property at Glen Farm where polo matches are held. Newport Polo has the option to request a renewal for an additional five-year term, he said.

According to Town Administrator Richard Rainer, Jr., much of the contract remains the same as the previous agreement. He said the town anticipates a 100-percent increase in revenue through the new agreement, however.

Under the contract, Newport Polo will pay the town $1 per entrance ticket sold for each match in the first year of the agreement. In years two through five, the per-ticket fee paid to the town will increase by the same percentage increase in ticket prices each year.

If you live on a private road and you were wondering whether the town will plow you out after a snowstorm, we have some bad news for you.

The council voted unanimously to reaffirm a 1996 policy stipulating the town will not plow snow on private streets. The vote was requested by Department of Public Works Director Brian Woodhead because there is still some confusion about the policy, despite the fact it’s been in place for 25 years.

Woodhead said DPW will work with the town solicitor to draft a letter informing all residents of private roads of the policy ahead of the winter season, so they’ll have time to make arrangements for snow removal.

Sitting as the Board of License Commissioners, the council voted unanimously to delay consideration on a license application for a gunsmith/gun dealer shop in the Portsmouth Business Park until Oct. 25.

The decision came after Police Chief Brian Peters said he’d like to review the premises beforehand before making a recommendation to the council.

The council unanimously accepted with regret the resignation of Jack Parquette from the Tree Commission, and appointed Marc R. Smith to the Conservation Commission, and Caitlin Duffy to the Parks and Recreation Committee.