PHS Principal Joseph Amaral is leaving his public school career behind, but says he’ll still try to make a difference with young students

PORTSMOUTH — When Joseph Amaral’s family first came to the United States from the Azores, he was just 5 years old.

“One month later, I was in first grade and didn’t …

PHS Principal Joseph Amaral is leaving his public school career behind, but says he’ll still try to make a difference with young students 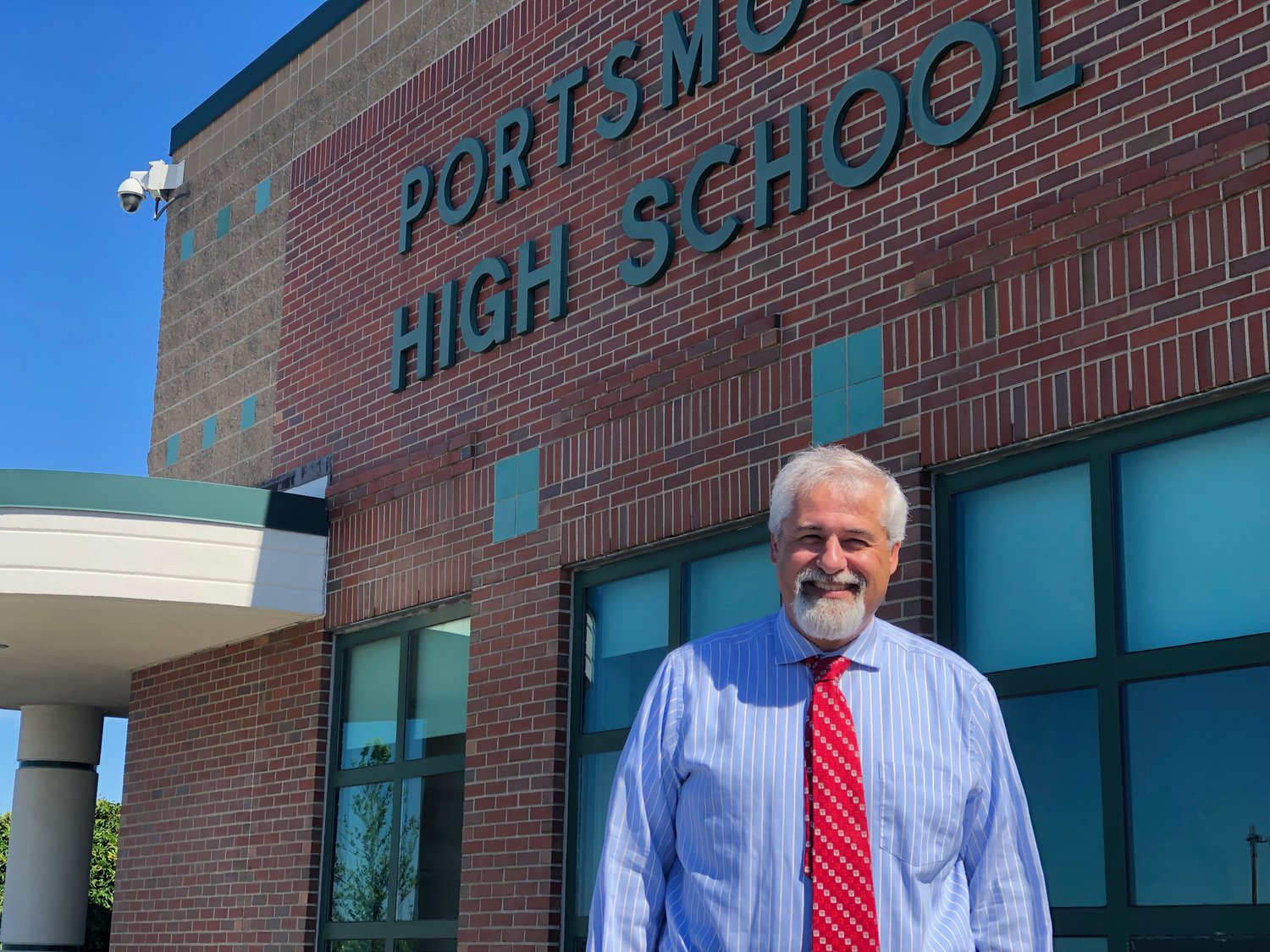 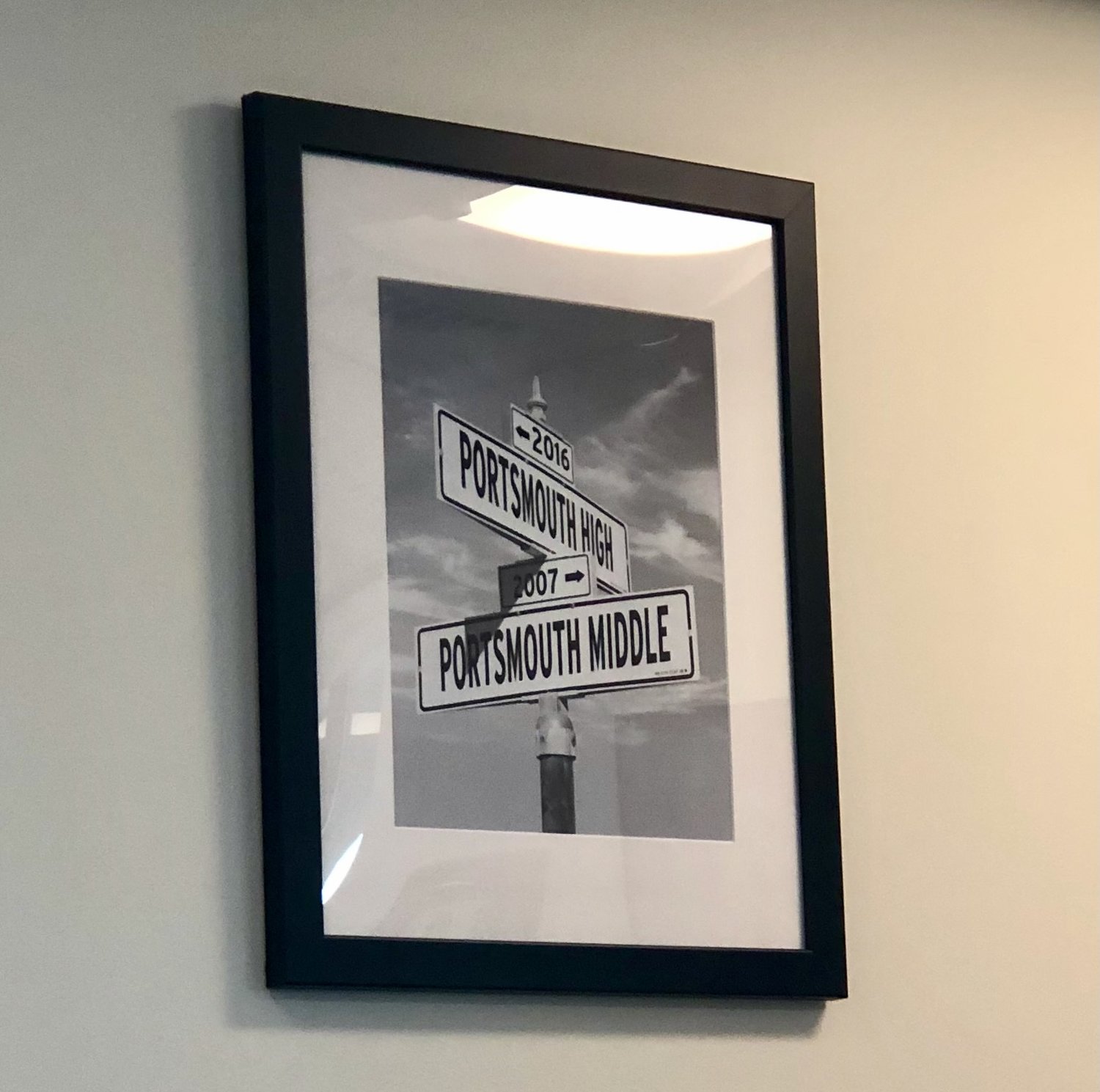 This sign was made up by Amaral's colleagues at Portsmouth Middle School on the occasion of his leaving to become principal of the high school in 2016.
Previous Next
Posted Thursday, June 23, 2022 11:31 am

I think lately, education is getting to be too corporate. We lose sight of the individual soul each kid has.”
Joseph Amaral, retiring principal at Portsmouth High School
By Jim McGaw

PORTSMOUTH — When Joseph Amaral’s family first came to the United States from the Azores, he was just 5 years old.

“One month later, I was in first grade and didn’t know a word of English,” said Amaral, the retiring Portsmouth High School principal who’s leaving after 34 years in education.

He still remembers one day on the playground, when a classmate named Dicky Lewis fell down.

“A teacher asked me, ‘Did you do that on purpose, or was it an accident?’ I didn’t even know what she was talking about, but she forced me to make an answer and I said, ‘purpose.’ I knew I shouldn’t have said that, because I had inside recess for the rest of the week,” Amaral recalled.

Fortunately, he had someone who cared enough to assist with his difficult transition.

“It was my first-grade teacher, Mrs. Perry, who helped me through that first year, giving me reading support,” he said. “There was no ESL program, but Mrs. Perry had the patience and the perseverance to really personalize that educational experience for me that first year. Along the way, I had so many people help me become who I think I am today because they took extra care and had patience.”

Reaching out to students on a personal level — like Mrs. Perry did — is something Amaral said he’s always tried to do. In fact, before school began last year, he went out and knocked on more than 200 doors of the incoming freshmen, just to introduce himself.

Some of the kids who answered their doors were shocked and thought they were in trouble, he recalled. “I told them, ‘I’m just here to say hi,’ and they would tell what was going on in their life.”

Amaral, 55, started his educational career as a math/science teacher at Portsmouth Middle School. He was 21. He was then transferred to PHS for a year to teach computer science, but he loved the middle school experience so much he left the district to serve five years as assistant principal at Barrington Middle School.

“Then when I got married, I wanted to be closer to home and there was an opportunity to be assistant principal in Portsmouth, so I did a lateral move. I was hired a second time to come back to the middle school.”

In fact, it appeared Amaral was “volunteered” twice for his two stints as principal in Portsmouth. Amaral said he never applied for the principal’s job at the middle school; the person who was chosen by the School Committee lasted for just six months, so then-Superintendent Susan Lusi asked him to take over. He stayed for nine years.

Something similar happened in 2016, when the district suddenly found itself without a PHS principal when Bob Littlefield retired in June. “(Then-Superintendent) Ana Riley said, ‘You’re going to the high school,’ and within two weeks I was there.”

Much like his move from the Azores to the U.S., Amaral found the transition to the high school challenging at first. “It was hard in the sense that I had been working with middle school kids. Their psychology is a little different. They structured the school more in teams. You have conversations about students on a daily basis, to make sure they’re doing well, and I liked that. Every grade was a school within a school. High school is a little bit more structured. It’s very independent, and departments are organized differently.”

He soon found his footing, though, and now takes pride in establishing several valuable programs at PHS during his tenure. One is the Freshmen Academy, to ease eighth-graders’ transition into high school.

“It’s almost like a blend between the eighth-grade philosophy of teaming, but you also had the opportunity to make sure kids had a safety net in ninth grade. It’s always a tough transition going into ninth grade; it’s too much, too soon,” he said.

His administration also established the popular Career and Technical Education (CTE) program at PHS. Anywhere from 80 to 120 students at PHS are officially enrolled, while others take some of the CTE classes. Another 30 or so students from outside school districts are also enrolled at PHS.

“It benefits our kids tremendously in terms of getting out and doing internships, like child development students going to Hathaway and Countryside (Children's Center) and working with young children,” he said, adding the district is now looking to add social justice and biotech to bring the number of CTE programs at PHS up to six.

During his tenure at the middle school, Amaral said, an extra math class for sixth- and seventh-graders was added, and there was an extra emphasis placed on writing in seventh grade. His administration also expanded the sports programs at the school, adding baseball and soccer, and standardized cultural field trips became the norm.

The COVID-19 pandemic that initially shut down schools in March 2020 turned into the hardest year of his professional life.

When asked if he’ll miss teaching or being an administrator more, Amaral paused.

“Teaching,” he said. “The amount of responsibility given to a principal back when I was a teacher in the early ’90s is a lot different than it is today. Today, we are responsible for the social-emotional as well as academic well-being of all students at a time when not everybody agrees that what’s right is right, and what’s wrong is wrong. That takes on its own stresses. As a teacher, I felt it was easier to make connections with kids. As an administrator, you’re putting out a lot of fires. It’s not easy.”

That said, he said he’ll miss the relationships he’s built with his colleagues on the administrative side. “I’ve had a blessed opportunity to work with so many kids and staff members. It’s a great honor to help make a difference.”

Amaral’s wife has been retired for three years. “She’s been wanting to do a couple of trips — some bucket list things,” he said.

Whatever the future brings however, he’s hoping it will still involve service to children.

“My whole life has been around kids — working as a sports official in high school, working as a coach, and also summer camps at the Y,” he said.

He and his wife still volunteer at the School on Wheels, a homeless shelter in Fall River that helps kids who are displaced from their home. “It’s tutoring, but they also need a daily connection because a lot of their life is topsy-turvy. It’s been down due to COVID, but we hope it will start up again soon.”

He also hopes to get involved in some effort to make education more personal for kids, and to help them grow to be successful in life.

“That’s what I tried to do as principal,” Amaral said. “I think lately, education is getting to be too corporate. We lose sight of the individual soul each kid has.”