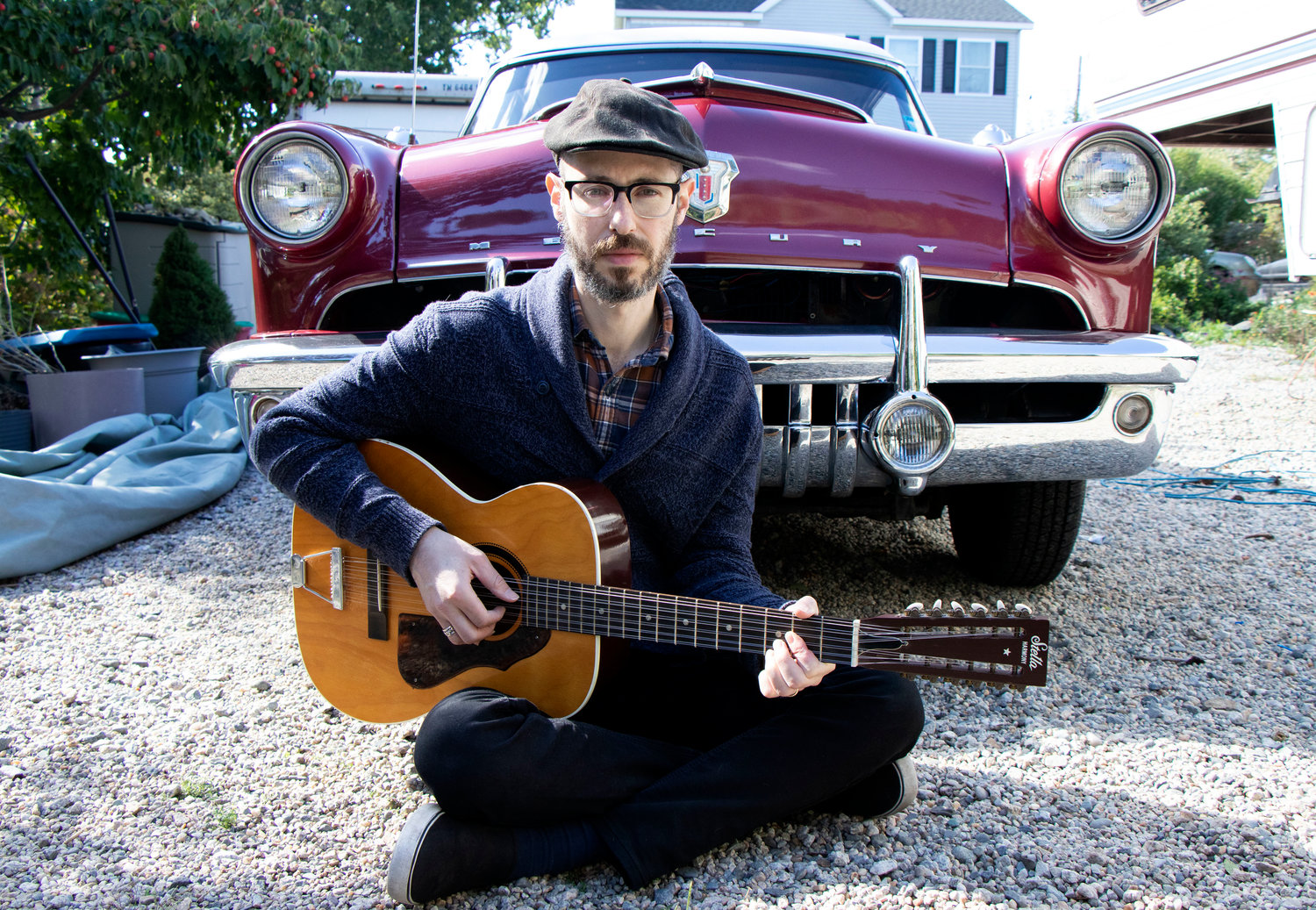 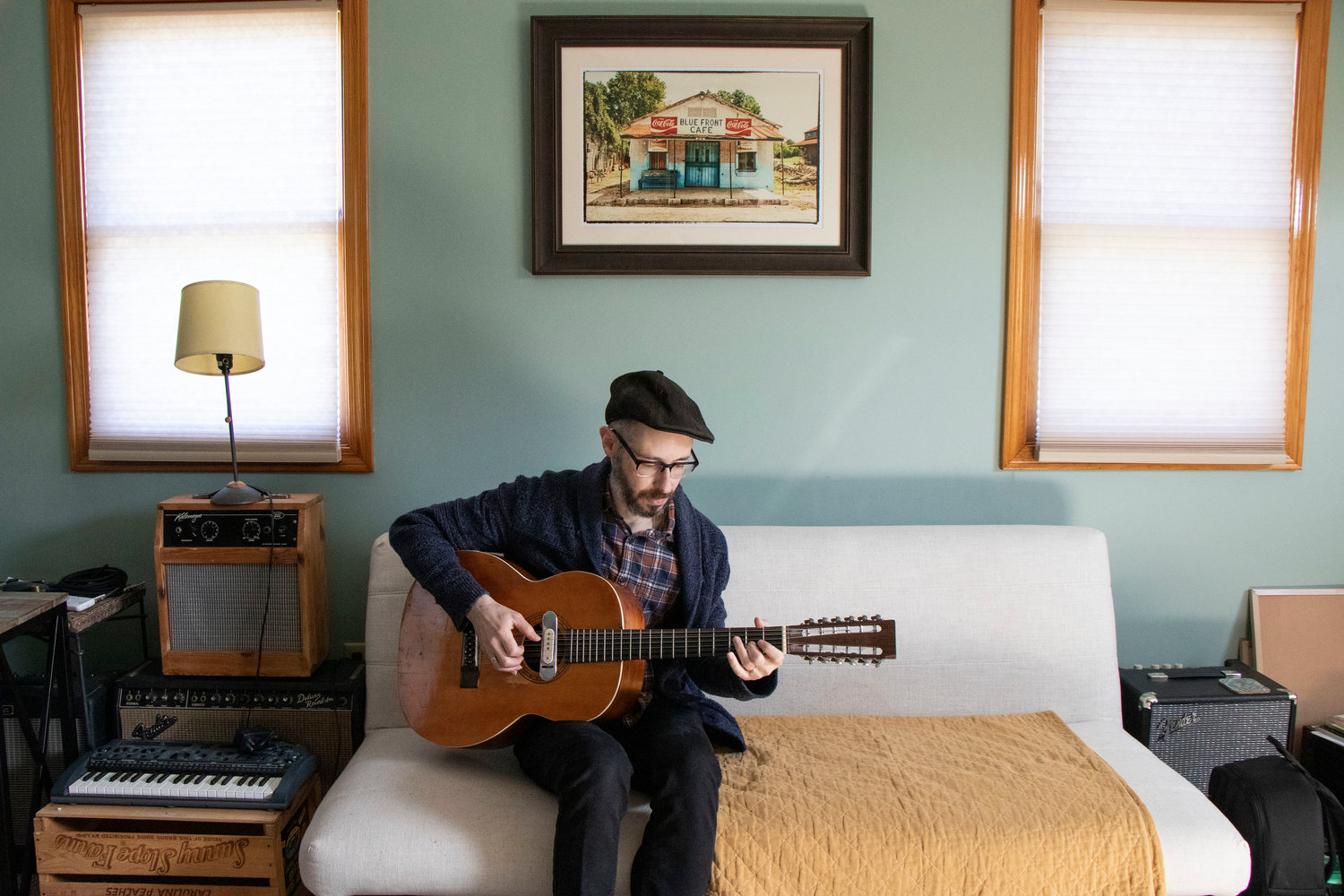 Ryan Lee Crosby in his home practice space in Island Park. Above him is a photo of the Blue Front Cafe, an old juke joint in Bentonia, Miss., where he has performed.
RICHARD W. DIONNE, JR. 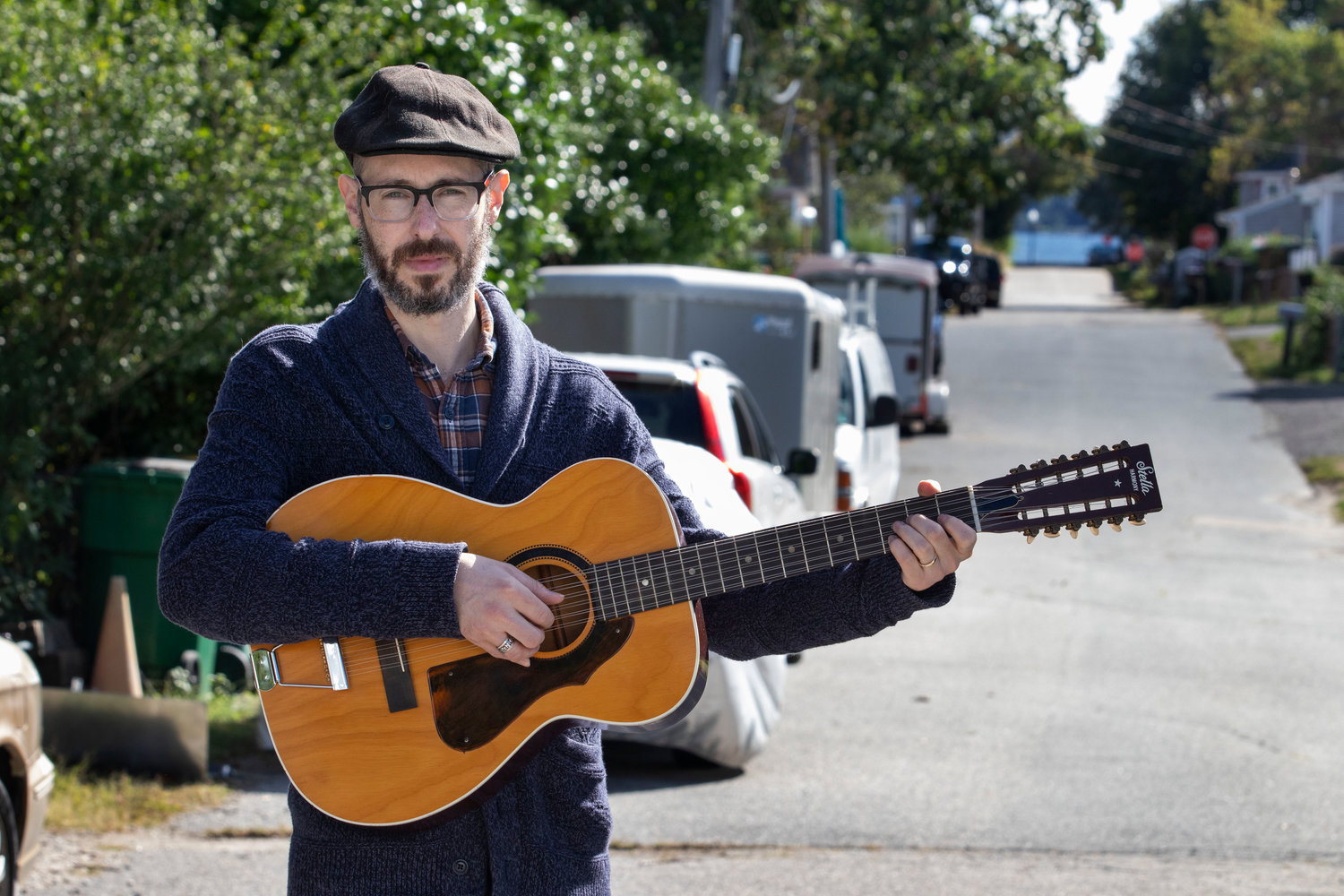 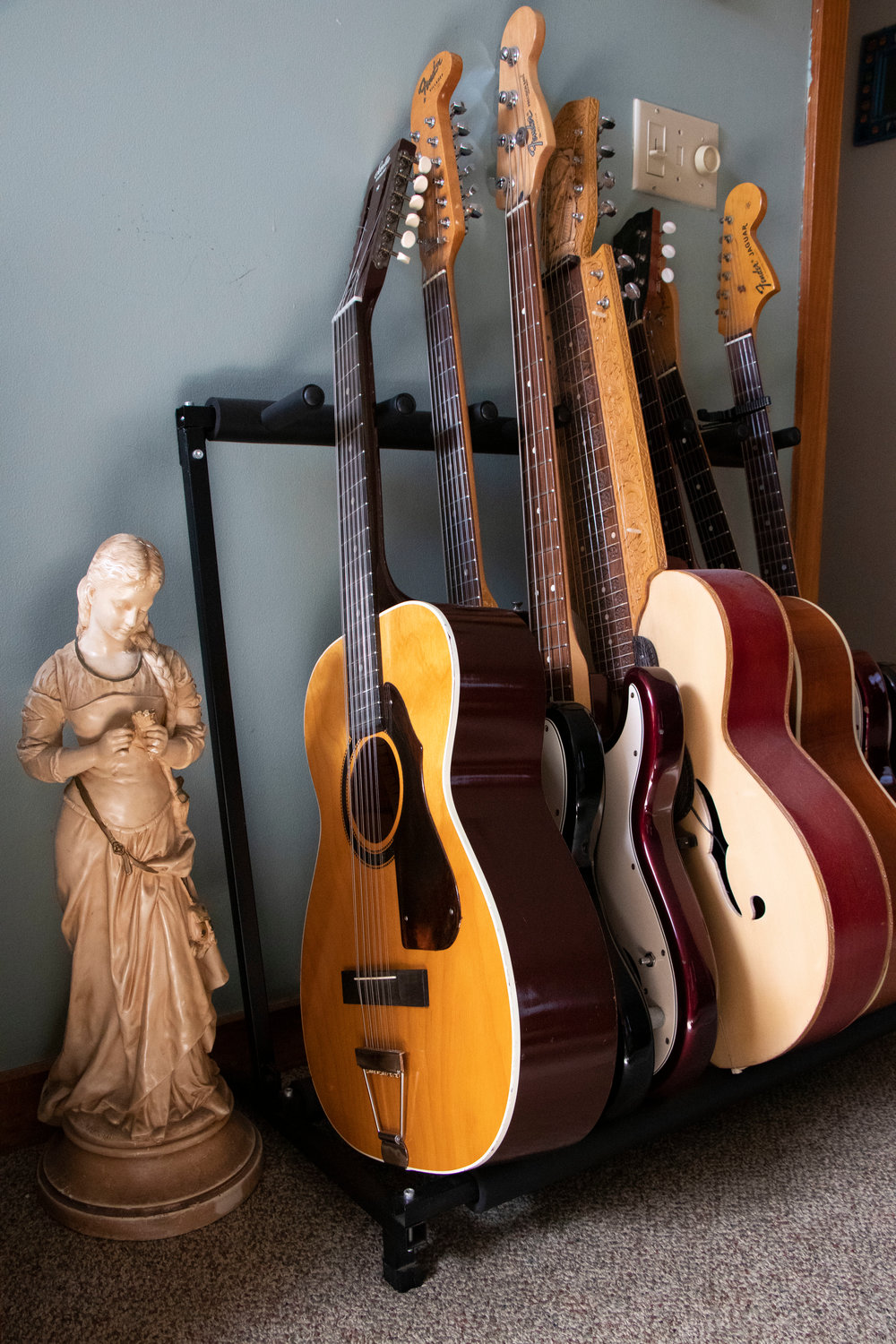 A sampling of some of the guitars Crosby has collected over the years.
RICHARD W. DIONNE, JR.
Previous Next
Posted Wednesday, November 30, 2022 12:27 pm
By Jim McGaw

If you’re anything close to a blues aficionado, you’ll recognize right away who Crosby — he moved to Island Park this summer from Medford, Mass. — is tapping into. With his acoustic guitar’s ominous minor-key open tuning paired against his eerie, lonesome falsetto vocal, Crosby sounds like the ghost of Skip James, who died over a half-century ago.

James, from Bentonia, Miss., recorded nine 78s of Delta blues in 1931 — “Devil Got My Woman,” “I’m So Glad” and others, today considered high art — before promptly vanishing into obscurity. Rediscovered during the folk/blues revival of the 1960s, he made a splash at the 1964 Newport Folk Festival and recorded several exceptional albums before dying in 1969, aged 67.

For Crosby, 42, who was in a punk band from 2001-2004 and then recorded a few albums on his own, hearing James for the first time about a decade ago was revelatory. He was already familiar with the blues, messing around with the genre after picking up a harmonica at age 13, then guitar at 14, and listening to artists like John Lee Hooker and Jimmy Reed.

After seeing an old Alan Lomax film clip of R.L. Burnside playing syncopated electric blues guitar, his interest in the blues was rekindled, and then a friend gave him a thumb drive full pre-war blues, Fat Possum records (a Mississippi-based independent label), and more.

“I was working my way through all that and falling in love with the Fat Possum discography. But then I heard Skip James in there,” Crosby said.

He instantly felt a connection to the haunting music.

“I did not know him, but I had on previous records of mine, or just things that I recorded and never released, been writing in a D-minor tuning and singing in falsetto — not necessarily in a blues style. But somehow, without knowing him, I found my way to him. It changed the direction of my whole life in a way.”

The discovery led to a deep dive into not only James’s music, but the music of his hometown of Bentonia, Miss. The Bentonia school of blues is characterized by a distinctive minor tonality in guitar tunings and chord voicings. Crosby wanted to see — and hear — what the scene was all about, so he made his first trip to Bentonia, a town in Yazoo County, Miss. (population 319) in 2019.

“I wanted to meet Jimmy ‘Duck’ Holmes and try to learn from him. I had reached out to him by phone a couple of times in 2014,” he said of the 75-year-old Bentonia blues legend whom Crosby now considers his mentor. (Other musicians he admires from the Bentonia school include Jack Owens, Henry Stuckey, Cornelius Bright and others.)

A few years later, a video of Crosby performing at the Deep Blues Festival in Clarksdale, Miss. ended up on Facebook, and it eventually led to a meeting between Crosby and Holmes in February 2019.

“He has a place called the Blue Front Cafe, which I think for all intent and purposes is where he lives. He has a home down the street, but I think he only goes home to sleep and take a bath. The Blue Front is said to be the oldest continually operating juke joint. I think his parents opened it in 1948,” he said.

Crosby played at the Blue Front during that first trip, and also took a couple of lessons from Holmes. “Since then, I try to go two or three times a year,” he said.

Making it his own

Crosby is no copycat or one-trick pony when it comes to musical styles, however. First of all, except for one track, all of the songs on the aforementioned Winter Hill Blues album are originals. (Crosby has put out about seven albums and four or five EPs, although they’re not all still in print.)

About 10 years ago he also dove into raga — basically, Indian classical music he first learned of through George Harrison’s experimentations with the Beatles — and started intertwining it with Mississippi blues.

Crosby’s parents, who had three other children, both died relatively young. It’s something that has informed his music from time to time. “Was it the Devil?” from the new album is about his mother, who died in 2016.

“I’ve written a number of songs about my parents and my family. One of the things that I look to music for is a sense of wellness and balance,” he said.

Crosby, who also gives online guitar lessons, enjoys playing house concerts and at intimate performance spaces, where people come for the music rather than the drinks. “I think the thing that always matters most is just the context. You can play for 20 people at a house concert and it can be just wonderful. Between 50 and 100 is my ideal,” he said.

He also performs at festivals — several in Mississippi — and has also toured parts of Europe with Bristol folk musician Allysen Callery and by himself. “I loved it. People were a lot more polite and quieter. I came across a passion for it and people that I met who feel differently than people (in the U.S.),” he said.

Crosby moved from Medford, Mass. to Portsmouth in July, and wasted no time in setting up a small studio in a practice room inside his Island Park home. It contains a TEAC reel-to-reel recorder and various amps and other equipment from the late-’70s.

“I’m not anti-digital, but I am pro-analog. I like using whatever I feel like makes the most sense for whatever I’m working on,” said Crosby, who even records to cassette at times, later digitizing the music so it can be easily tweaked on a computer.

He’s itching to play more gigs in the local area — Crosby’s performed at Greenvale Vineyards in Portsmouth and the Galactic Theatre in Warren in the past — but he’s still getting accustomed to his new digs. His wife, Nicoline Falkenberg, is a yoga teacher and life coach in the Rhode Island and Boston area. Her family lives in Middletown, so they were already somewhat familiar with the area.

One of the first things Crosby did after moving to Portsmouth was to educate himself about the town’s history. He read an article in The Portsmouth Times about Island Park before the 1938 hurricane, and watched a number of YouTube videos of lectures by Town Historian Jim Garman. Now he’s ready to explore.

“It’s amazing how many things you have to do to settle when you move, so I think we’re still kind of scratching the surface of getting a sense of everything around us.”

For more information about Ryan Lee Crosby, including his recordings and upcoming shows, visit his website at ryanleecrosby.com. His albums are also available on Bandcamp (ryanleecrosby.bandcamp.com).