Bristol Warren’s new school superintendent laid out a five-year plan for the district Tuesday evening, telling a group of about 100 parents and teachers during a 90-minute presentation at Mt. … 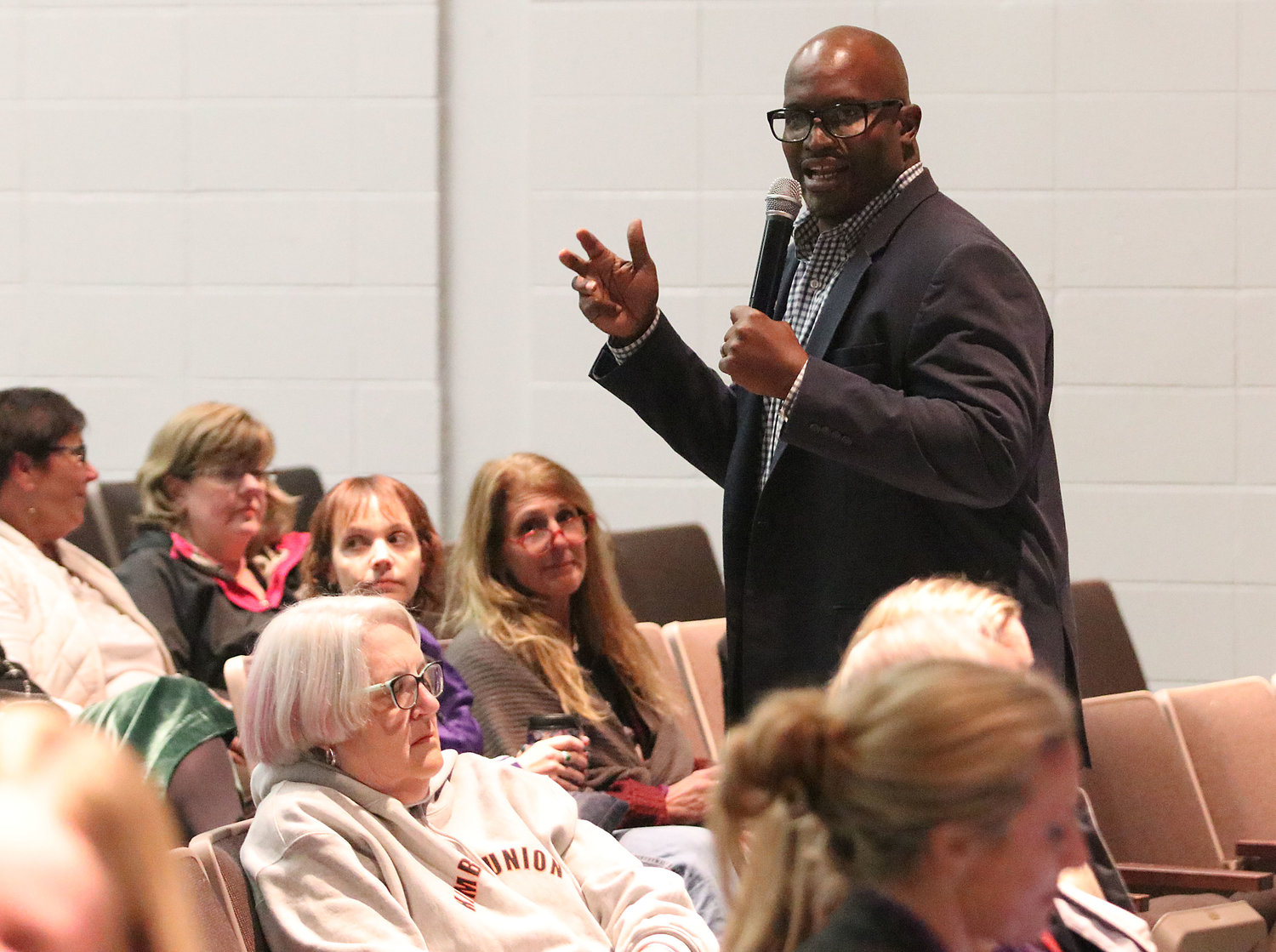 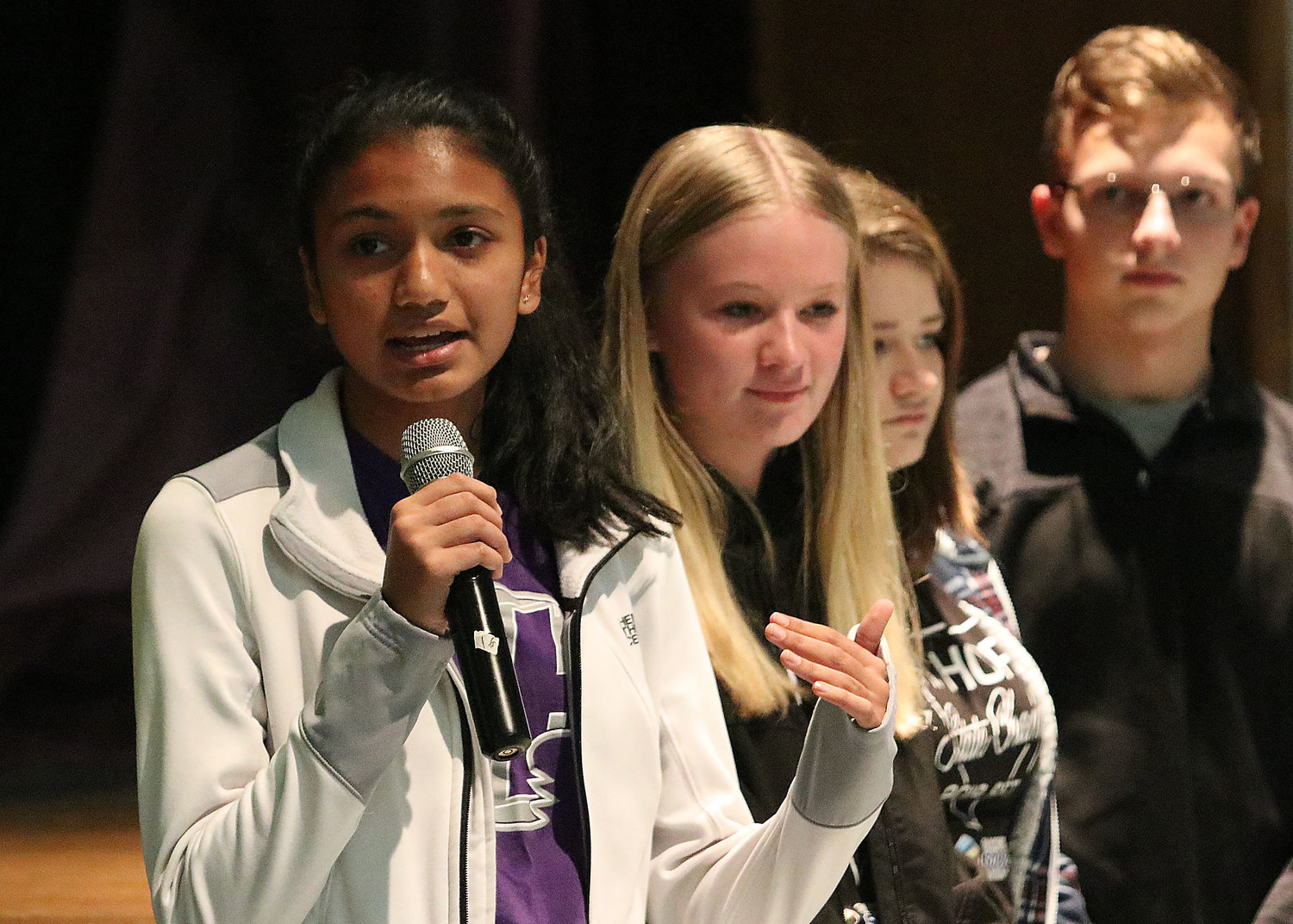 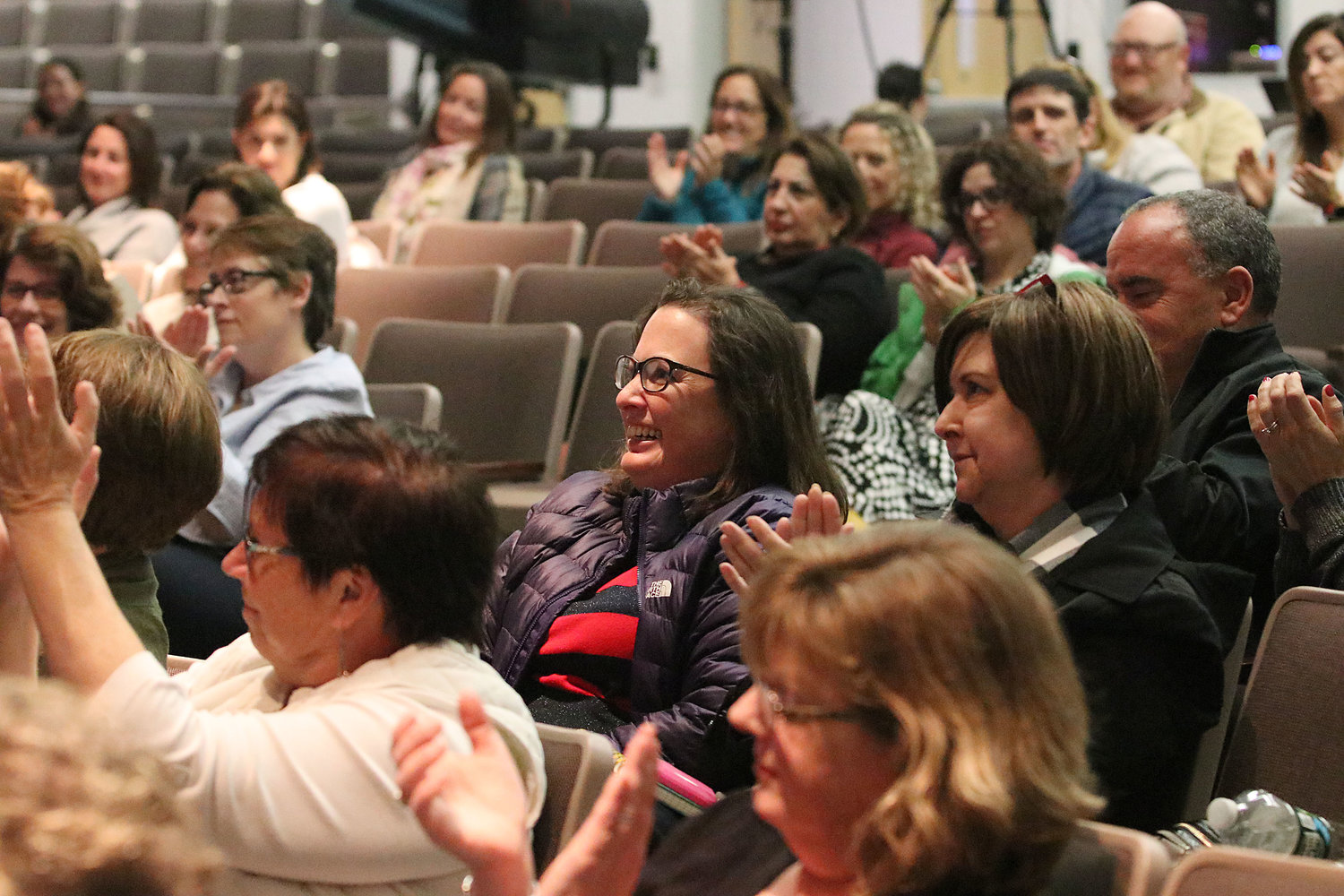 Bristol/Warren elementary school math coach Christine Hughes receives a hand from the audience after Superintendent Brice singled her out as one of the district’s many talented educators.
Richard W. Dionne Jr.
Previous Next
Posted Wednesday, November 6, 2019 1:02 pm

I don’t care what their dream is. I care that they’re prepared to follow it.”
Superintendent Jonathan Brice
By Ted Hayes

Bristol Warren’s new school superintendent laid out a five-year plan for the district Tuesday evening, telling a group of about 100 parents and teachers during a 90-minute presentation at Mt. Hope High School that in the coming years, the district must do a better job preparing students for the changing world:

“It’s really all of our responsibility to make sure that we are thinking about the future,” Dr. Jonathan Brice said.

Dr. Brice’s comments came during the first of two public meetings held this week to discuss the future of education in Bristol and Warren. The second was scheduled for Wednesday evening at Kickemuit Middle School in Warren.

Coming to the job after the departure of former Supt. Dr. Mario Andrade, the interim superintendent pledged upon his arrival to help the district recover from recent morale and middle and elementary school-level student discipline issues, and to help, as he said Tuesday night, focus educators’ efforts on revamping the district’s culture and goals.
His talk started off with a short Youtube video that showed that while technology has changed considerably over the past 100 years, educators still hold to roughly the same model they’ve used for decades: Put students in classrooms for a set amount of time, and crank out graduates versed in subjects that have hardly changed in years.

Such a model may have worked 40 years ago, when a high school or four-year college education ensured a secure middle class life. But no more, he suggested:

“There was a time when success was guaranteed with a bachelor’s degree,” he said. Now, with graduates expected to compete with peers on a local, national and international stage, all districts — not just Bristol Warren, he said — must do a better job preparing them for a changing job market, rapidly increasing technology and increased competition.

“We no longer live in a little cocoon,” he said. “We need to be in the business of preparing our kids to be regionally, nationally and internationally competitive. Our challenge is, how do we get our children prepared for those jobs, traditional jobs and jobs that haven’t even been created yet?”

He believes that preparation includes not just increased use of and exposure to technology in the classroom, but also improving social emotional support for students, encouraging a culture of learning and cooperation among them, allowing students to focus on things that interest them, solid guidance, and real-world experience.

It’s not that Bristol Warren isn’t moving toward those areas, and he pointed to several examples, including a group of Mt. Hope students’ recent success in the Rhode Island Solve For Tomorrow Challenge, as examples of how future education can work. In that project, a group of freshmen and sophomores worked cooperatively, on their own, to come up with ways to increase traffic safety at crosswalks. They collected data in the field, talked to state officials, designed traffic calming features, divided work based on each student’s specific interests and skills, and used technology to help design effective solutions to the problem. Their combined efforts, quantified through follow-up study of their solutions that showed real impact, earned them a $20,000 prize.

“All of the work they did, really, is about what we want our young people to do,” he said.

Still, the district still has a long way to go in maximizing the potential of every student, he said.

While Dr. Brice’s vision for the district is lofty, he said, it is also realistic. He acknowledged that while the district needs to get students prepared for college and life after high school, not all will go on to higher education. What’s more important, he said, is helping guide all students, not just those bound for college:

“As a community, we should have a vested interest in making sure that all of our young people have a plan. I don’t care what their dream is,” he said of students. “I care that they’re prepared to follow it.”

To that end, he said steps will immediately be taken to develop a five-year strategic plan. One of the first will be the formation of a study group including representation from teachers, students, parents, school committee members, the business community, and more. Dr. Brice said he hopes to have possible plans discussed in time for the next budget cycle in early 2020, and said he wants to hear from everyone who has an opinion on what future schools should look like.

As the process moves along, Dr. Brice said discussions will be open, and he welcomes input and suggestions from anyone who has something to say.

He suggested writing to his assistant, Kathryn Brown, at kathryn.brown@bwrsd.org.

“We want to do this in a transparent way,” he said.

“I’m less concerned with the amount (of future budgets). Put that on the side; let’s talk about the what. If we get the what correct, we’ll figure out everything else.”

Portsmouth schools being spruced up for opening day