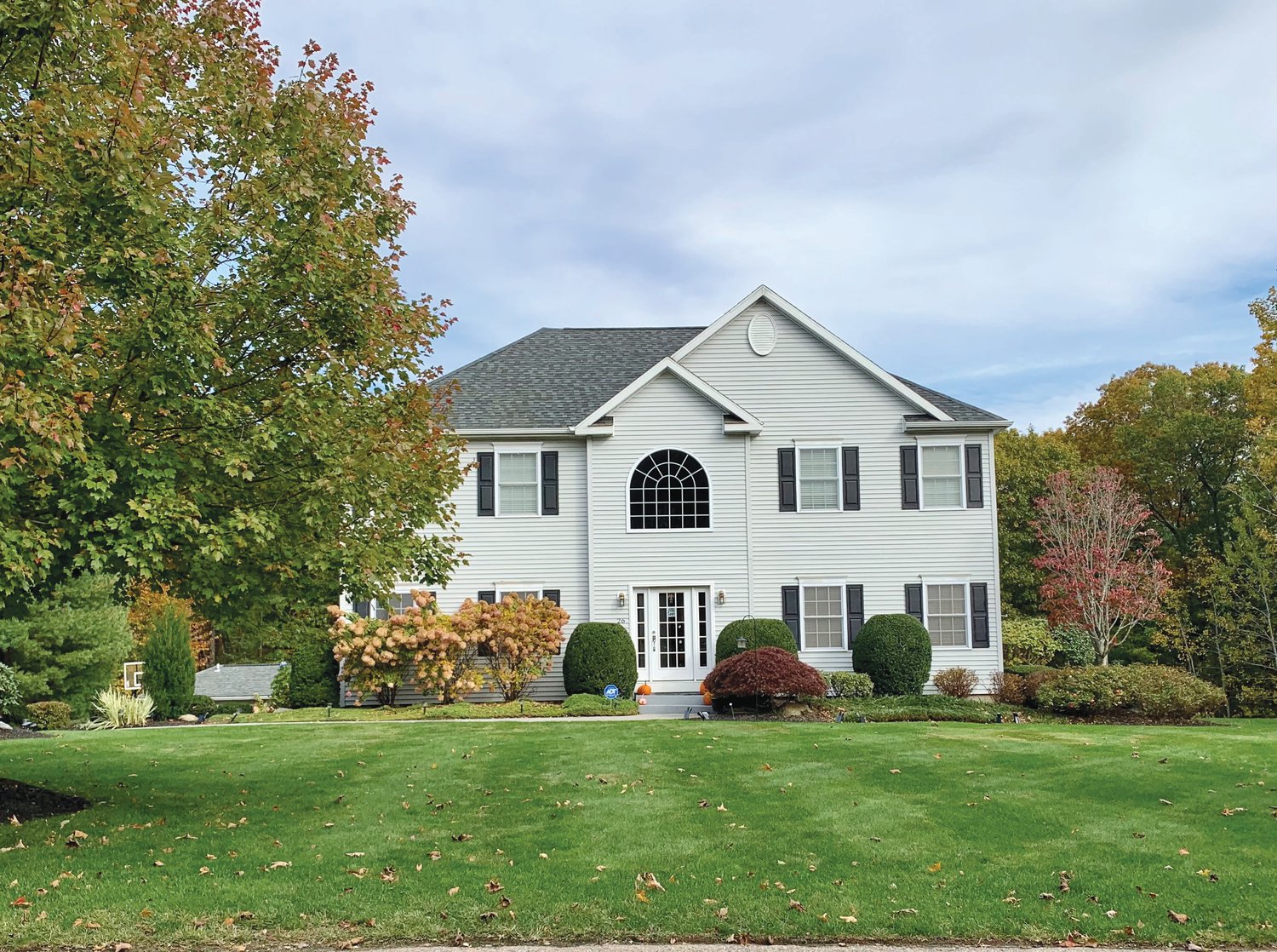 This Rhode Island home was built offsite and delivered in pieces to a lot that had been prepared with utilities and foundation. One industry expert says customers are getting finished houses about five months after placing an order. 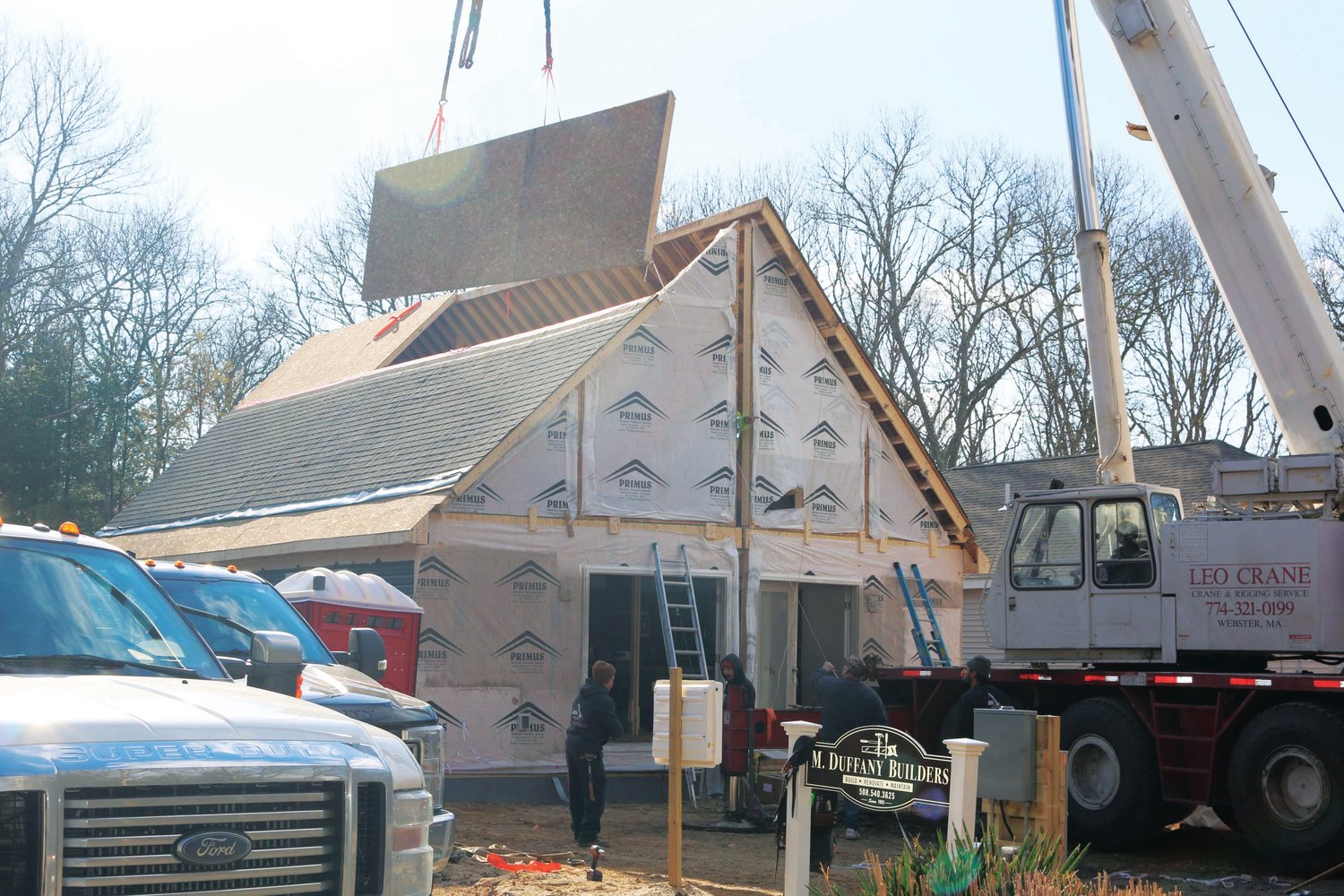 Crews assemble sections of a modular home in Falmouth, Mass.
Previous Next
Posted Thursday, December 16, 2021 7:00 am
By Karen Flaherty

Skyrocketing prices and a shortage of existing homes for sale have led some buyers to investigate whether they should build a home instead of getting caught up in bidding wars.

It makes sense, but many of these buyers become disheartened when they realize that quotes are high, and the building timeline can exceed their expectations by a year or more. Associated General Contractors of America released their October “Construction Inflation Alert,” which warns that there are currently “delays at every stage of the supply chain.” The report also states that, while some prices have come down, there is “continued volatility in material costs, as well as lengthening lead times for both production and deliveries.”

Everything from lumber and gypsum drywall, to fixtures and appliances have been affected.

While engineering and approval delays can’t be avoided, a few buyers are shortening the timeline by building modular homes. In fact, the Northeast is now leading the way in modular sales. According to the National Association of Home Builders website, “5% of the region’s 57,000 housing units completed were due to modular construction, the highest share in the country.”

In the past, modular homes offered few options for customization and, because of their “cookie-cutter” appearance, received lackluster enthusiasm from buyers. With advances in technology and technique, that has changed significantly. Modular builders now offer homes of all sizes with fully customizable floor plans and finishes.

Impresa Modular, a national modular builder based in West Virginia, offers an interactive tool that allows buyers to design a home from the comfort of their laptop.

Another reason that consumers have been slow to warm up to modular construction is that they often confuse modular with manufactured homes. Manufactured homes are built in one piece and moved on their own frame to the site. They are affordable and a great choice for those with a tight budget, but they are not considered to be “real” property.

Modular homes, which take on average 6 to 10 weeks to build, are built by contractors in a controlled factory environment. They are completed in sections, or modules, and then transported to the lot in pieces, where the foundation and engineering work has already been completed.

Once there, the sections are “set” by a crane and joined and finished by professional installers. Once there, these homes are subject to the same codes, standards and inspections as conventional stick-built homes

What about material shortages and price increases — aren’t modular builders affected as well? While material costs have gone up worldwide, modular builders purchase everything from lumber to fixtures and appliances in bulk. This has helped them to avoid shortages as well as keep construction costs lower than traditional builds.

Kelly Ambrosino, of Providence-based Modular Home Concepts, is a dealer for Champion Homes, New Era Building Systems and Skyline. She says that, while they aren’t experiencing shortages, the sharp increase in building material costs did eventually filter into modular construction prices. Her manufacturers implemented an October surcharge which led to an overall price increase of about 20-25%, which is in-line with traditional build price increases.

While the efficiency is a benefit for some, the biggest advantage for most buyers who choose to go modular is the shorter construction timeline. Ambrosino says they are “running five months out for delivery, from time of order.” She says that, for buyers who have the land and approvals ready, they expect “homes ordered in October to be completed in March, and homes ordered in November to be delivered in April.”

Because these homes are built in a controlled environment, they can begin production at the factory while the land and foundation are being prepared. New England weather is always a consideration when building, so delays due to weather are reduced and would only be a consideration during the sitework and foundation preparation.

This shortened timeline can lead to other savings. According to Daniel Briand, president & CEO of BayCoast Mortgage Company, mortgages for modular homes are “similar to traditional construction loans, but with a different disbursement schedule.” Briand says that with modular, it’s very convenient to finance the land and home together and, because of the shorter timeline, buyers save on financing costs. He notes that buyers should be aware of insurance requirements: “Insurance is a key component because buyers take delivery at the site. They should be aware of who is expected to insure the units at each stage of the process.”

Many lots waiting for a home

With so much uncertainty in the world, even homeowners who are ready to move have been slow to list. Many cite fear of finding a place to go as their main concern. This, along with low interest rates, has caused a backlog of buyers, who are driving up home prices by offering tens of thousands of dollars above asking price in an attempt to “win” the home.  While traditional builders are trying hard to meet the need, they have had to deal with high demand, drastically fluctuating material prices, shortages, and a soft labor market. This has been a frustrating time for many homebuyers, especially those who are anxious to settle into a home.

While no one can say what the future brings, house lots are available. At the beginning of November, there were approximately 80 lots for sale in the East Bay area versus only 180 homes for sale. For buyers who find the right lot and can wait a few months, modular homes might shake loose the supply chain bottleneck.