Established in July of 2007 by Jen Cavallaro, The Beehive quickly became a favorite downtown destination for great coffee and pastries. Breakfasts, then lunch options soon rounded out their … 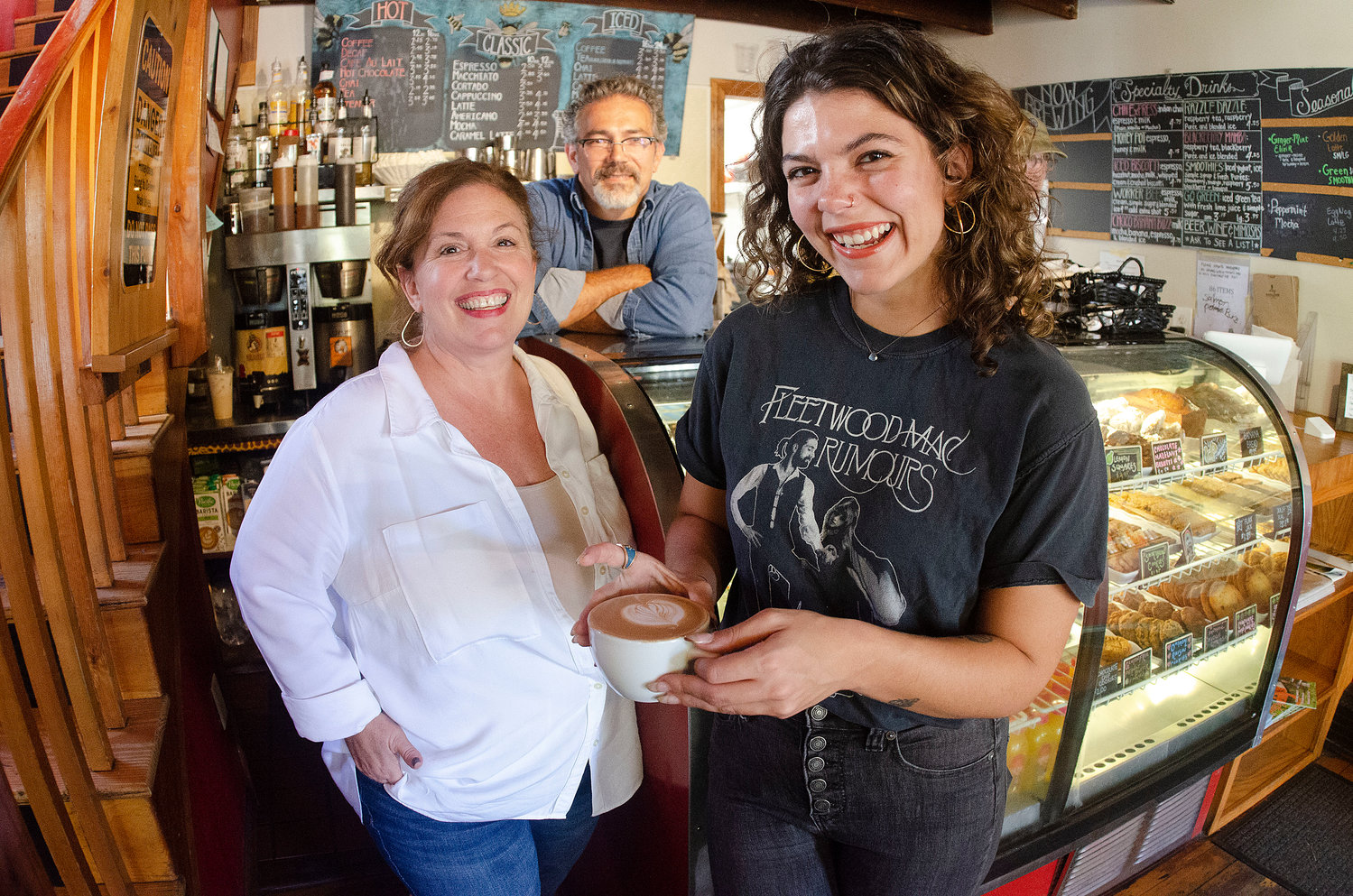 Sherry, John and Emily Scott (left to right) are the new owners of The Beehive Café and The Beehive Pantry. Emily was a Beehive employee for many years and will be overseeing day to day operations, without dramatic changes to the menu or atmosphere.
Richard W. Dionne Jr. 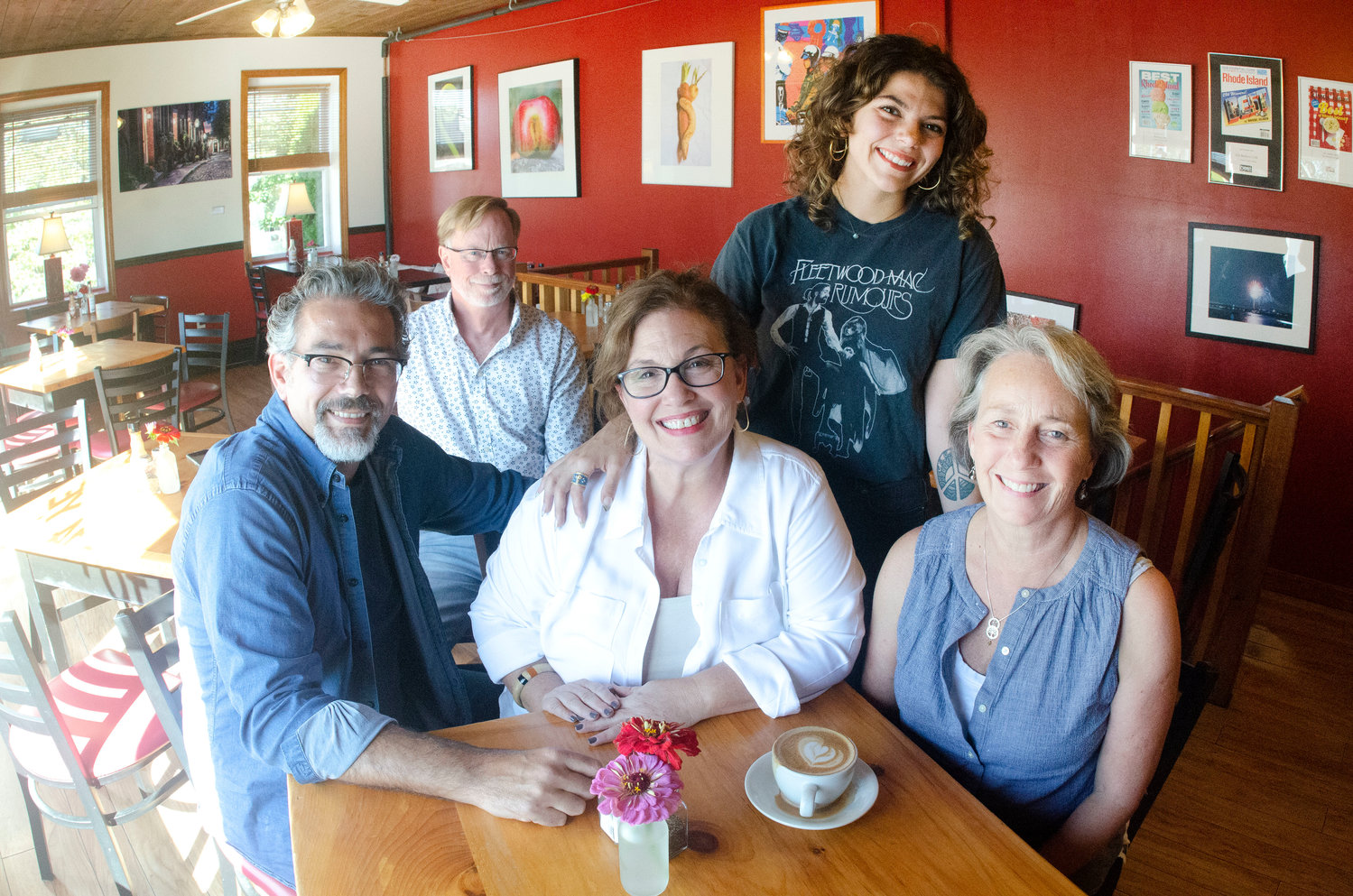 The Beehive has passed from one family to the next, with Chip (back left) and Jen Cavallaro (front right) selling their beloved business to John, Sherry and Emily Scott (left to right). The new owners have been Beehive customers for years and promise only modest changes to menu or atmosphere.
Richard W. Dionne Jr.
Previous Next
Posted Monday, October 18, 2021 1:55 pm

That’s why it was so easy for us to take this on — I was one of their top customers. I love it. Why would I change it?”
Sherry Scott
By Christy Nadalin

Established in July of 2007 by Jen Cavallaro, The Beehive quickly became a favorite downtown destination for great coffee and pastries. Breakfasts, then lunch options soon rounded out their offerings, as did weekend dinners, beginning in 2010. A big kitchen renovation followed in 2014, with the addition of the Beehive Pantry location on Gooding Avenue soon after.

“When we opened, we didn’t even have a website,” said Jen. “It was that long ago.”

“We’ve been running down the track after the train since then,” said the self-taught baker, who developed her love of baking pastries at the original Olga’s Cup and Saucer in Little Compton, when her children were young.

With the sale of The Beehive concluded last week, Jen and her husband Chip are going to enjoy some down time before making any decisions about their next steps. “We don’t know what’s next,” she said. “But we aren’t planning on any more food businesses, that’s for sure.”

Grateful for their team

Jen credits the continued success of The Beehive over the years to her staff. The most well-known name to come out of The Beehive kitchen may be Chopped champion Eli Dunn, but it’s the current team, the one that saw the company through the pandemic, that have Jen’s gratitude during this transition.

“We were so very lucky to have a team willing to come off unemployment and take less money,” she said. “They knew if they didn’t, we would not survive.”

“There’s Steve Wallace, our head cook. He is super calm. Some days we do 300 to 400 meals — not coffee, meals — in a kitchen that is basically a diner setup. It takes real fortitude to work all day under that kind of pressure. Those cooks are superstars,” Jen said. “Steve Borges is the second in command, and Caitlin O’Connell is the front of house manager. At the Pantry, Jill Borgia, head baker, Thom Sheehan, head of all savory food production, and Mary Jackson Head, our barista — they all came back during COVID and worked so hard.”

“We are very lucky; we survived COVID in a way I could not imagine.”

It is with confidence and gratitude that Jen and husband Chip Cavallaro are handing the keys to Emily Scott and her parents, Sherry and John, longtime friends, customers, and, in Emily, an employee.

“I worked here from the time I was 14 until I was 21,” said Emily, a graduate of LaSalle Academy who received a degree in Hospitality Management from Johnson & Wales University. “I grew up at The Beehive.”

She also worked for two years at Pastiche in Providence, and interned at both The Beehive and Newport Vineyards while at J & W.

Not long ago, the family was exploring the idea of opening a food business, and Sherry happened to be looking at listings of existing establishments for sale.

“Lo and behold, my friend Jennifer’s business came up,” said Sherry. “It didn’t say Beehive in the title, but I recognized the description right away.” The rest is history.

“We didn’t tell anyone until we knew it was a done deal,” said Emily.

The family’s division of labor comes naturally, with Emily’s managerial experience and familiarity with The Beehive making her a fit for overseeing operations and training staff, while Sherry will handle back-end operations and, as an event planner with a keen eye for detail, she will take on a little refresh of the interior.

John has no plans to step away from his 30-year career in juvenile corrections, where, among other interests, he oversees the urban garden at the Training School and works with the Harvest Kitchen Project. An enthusiastic cook, John will collaborate with the chef/manager and Emily on the menu, which they plan to keep fundamentally unchanged.

“Jen refreshed the menu with the seasons, and we’ll follow that,” said Emily. “But there will be no major menu changes.”

“No one will come in and feel like there’s been a big change,” added Sherry. “That’s why it was so easy for us to take this on — I was one of their top customers. I love it. Why would I change it?”

A place to relax

One thing the Scotts really want to do is bring the dinner service back. “Dinner is such an important way to connect to community. You relax, spend some time,” said Sherry. “Dinner has a lot of emotional connection.”

Sherry is a native of Johnston, while John grew up on Federal Hill. Emily was largely raised in Bristol after the family moved here in 2006. The couple recently moved to the Tourister Mill in Warren, but Bristol still feels like home.

“The first time I went in the pantry to bake, it felt like a homecoming,” said John. “Where I grew up on Federal Hill, I was a paperboy, and back then, the Hill was full of bakeries. That smell of a bakery in the morning really brought me back.