Last season the wildcats played Paulo Freire to the death in the Division 5 Sweet 16 in Chicopee on a frigid, stormy Wednesday night. It was a dog fight that wasn’t over until the buzzer and then Panthers went on to play in the finals and Westport took a snowy two-hour bus ride home. 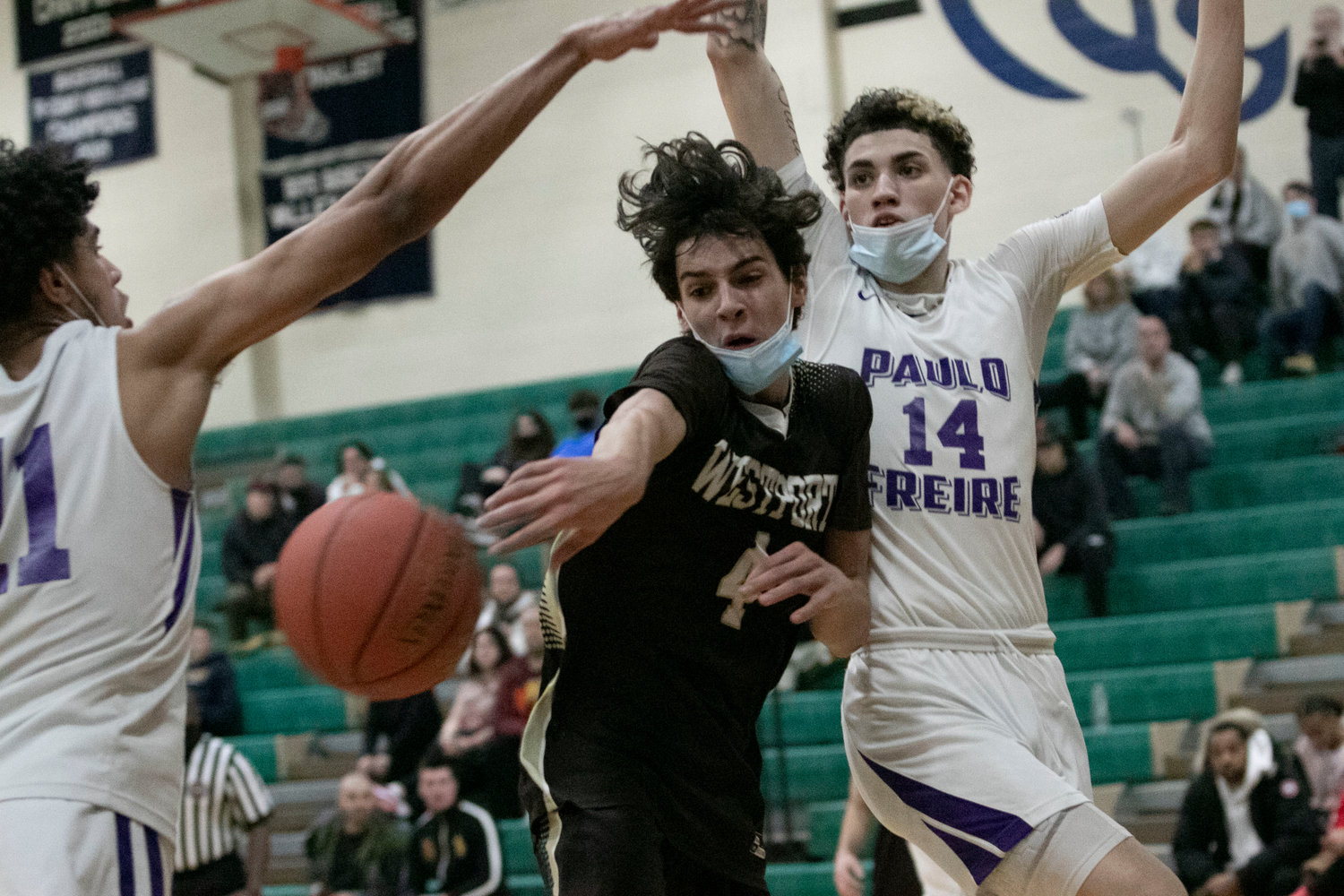 Coach Boudria is looking for big things from son, Owen, a sophomore this season. “He has great hands and he’s got a jump shot where he can elevate over opponents and shoot it. Which few high school kids have. And he has the support of his teammates. If you have those things, you can do well.” 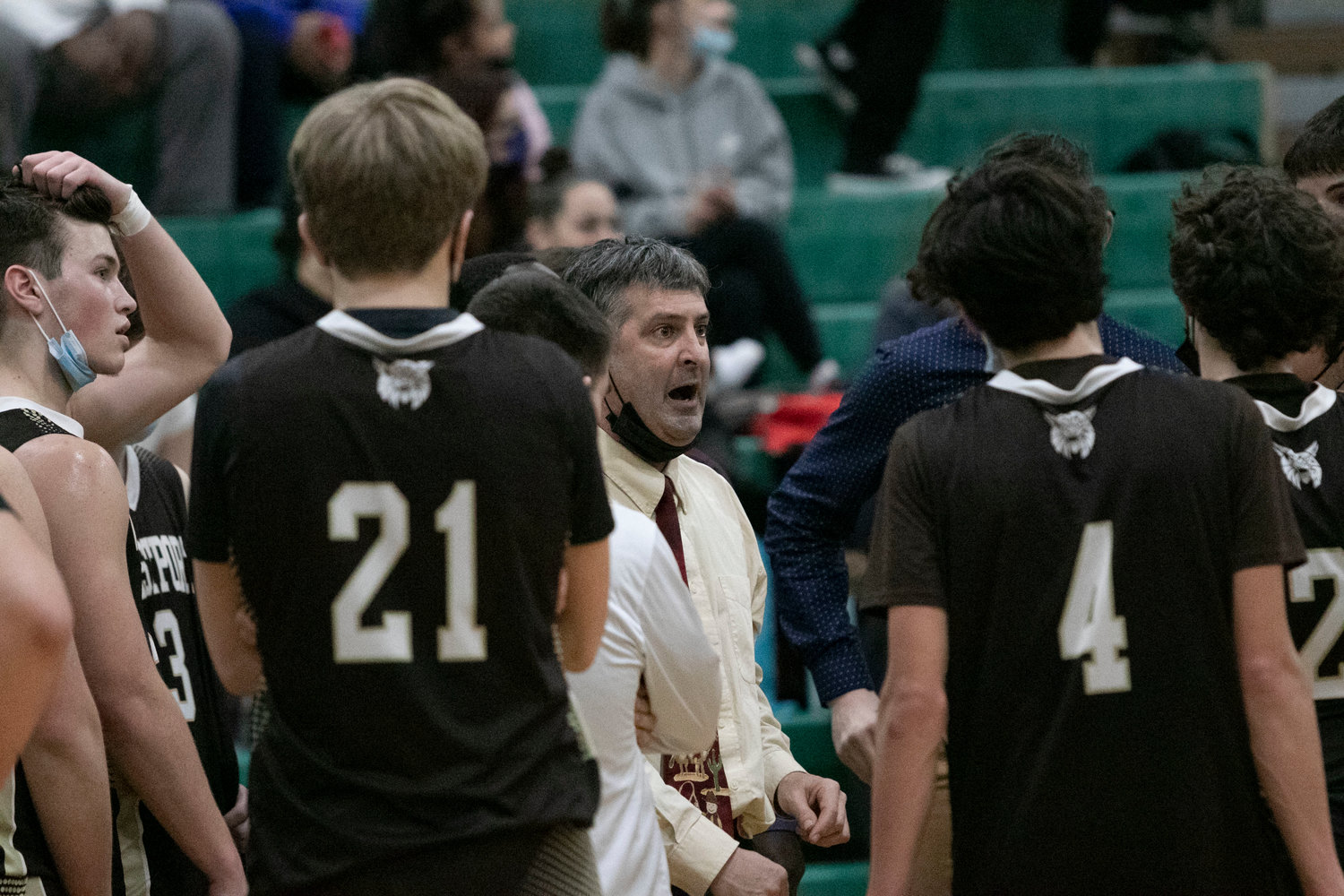 Head coach Scot Boudria speaks to his team during their Sweet 16 loss to Paulo Freire last season. He said that “The sky is the limit,” for this year’s Wildcats as they begin the 2022-23 season with scrimmage games this week.
Photos by Richard W. Dionne, Jr. 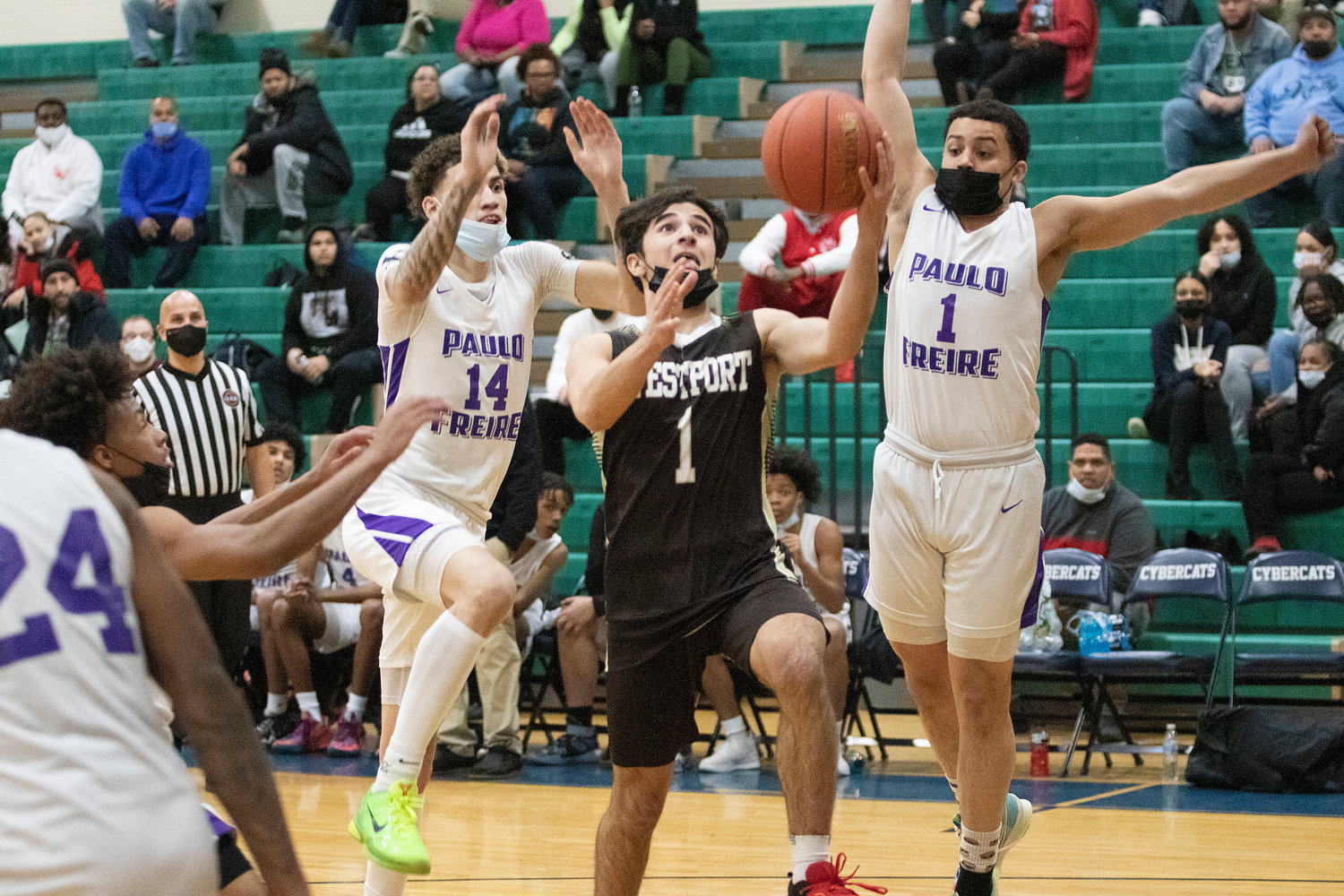 “When Hunter Brodeur wants to turn it on, there aren’t many kids who can stop him,” said Coach Boudria about his senior co-captain. 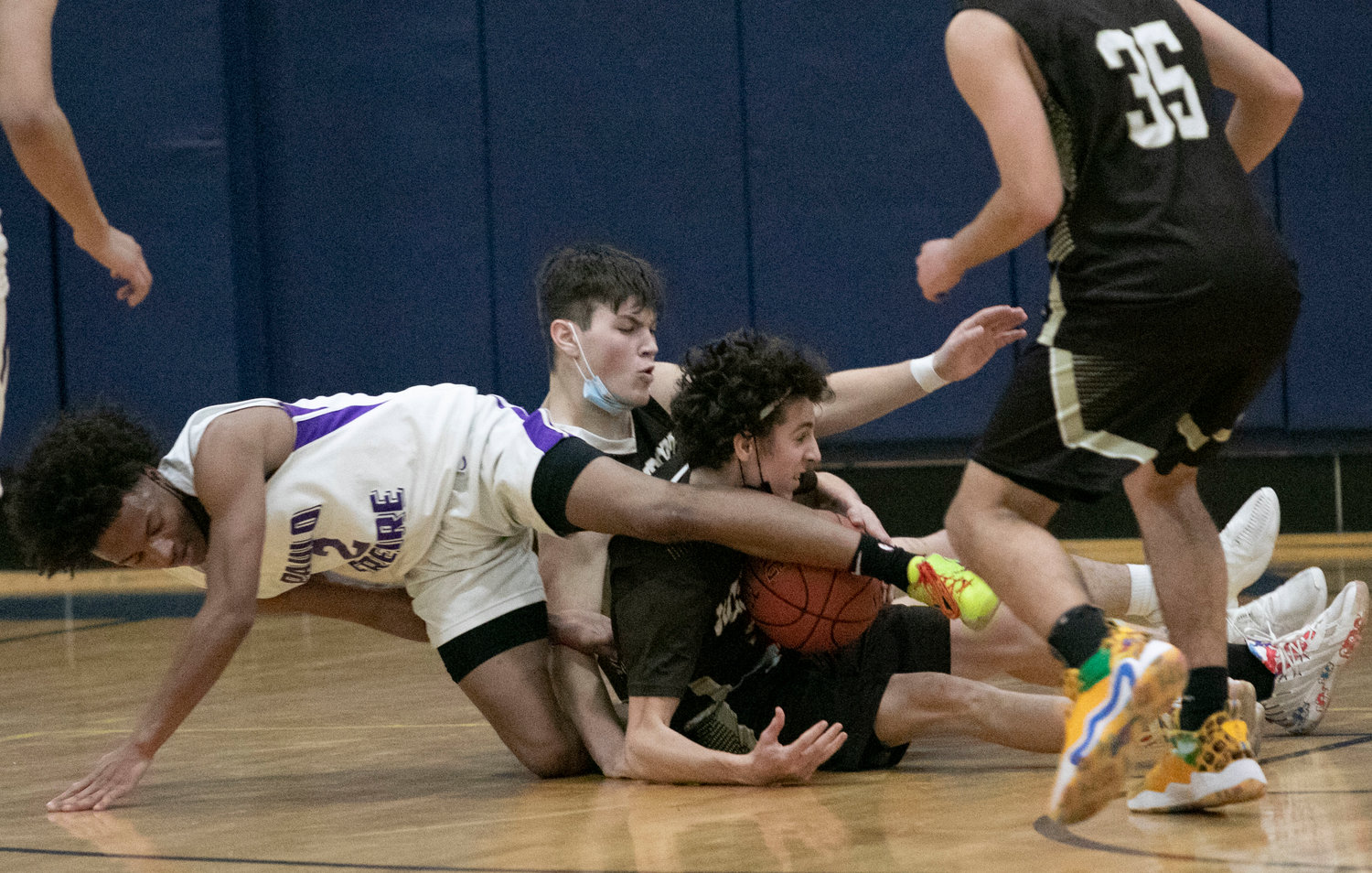 Ben Boudria (middle) a Wildcats dirt dog, will lead by example as a senior captain this season. 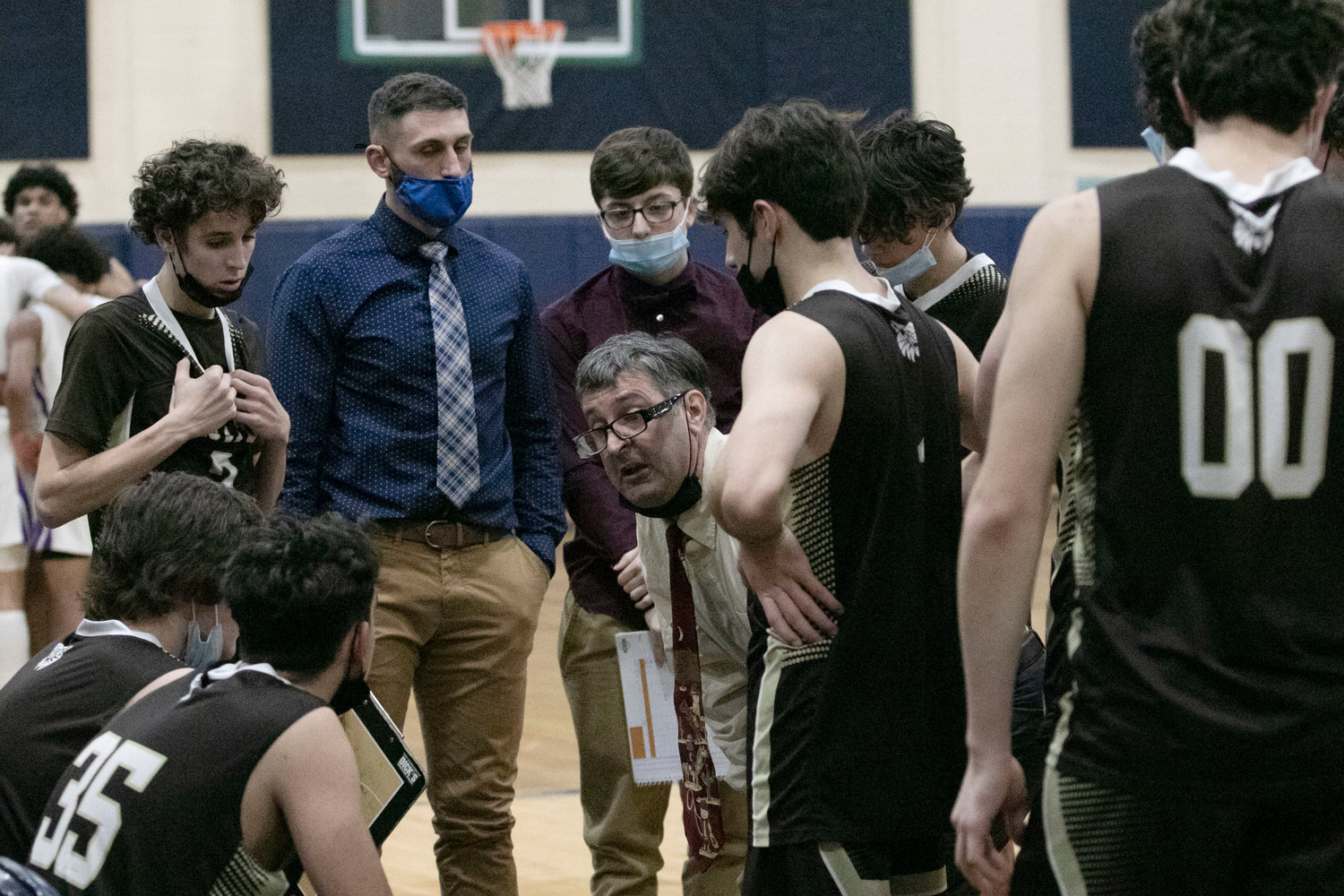 “I’ve been coaching these guys since third grade. They have been to all of my camps. They have worked my camps. They have all slept over my house. I know all of their parents very well. This group is pretty special to me,” Head coach Scot Boudria said during an interview last week. “This year is going to be real tough for me at the end. I’m a very sentimental guy.” 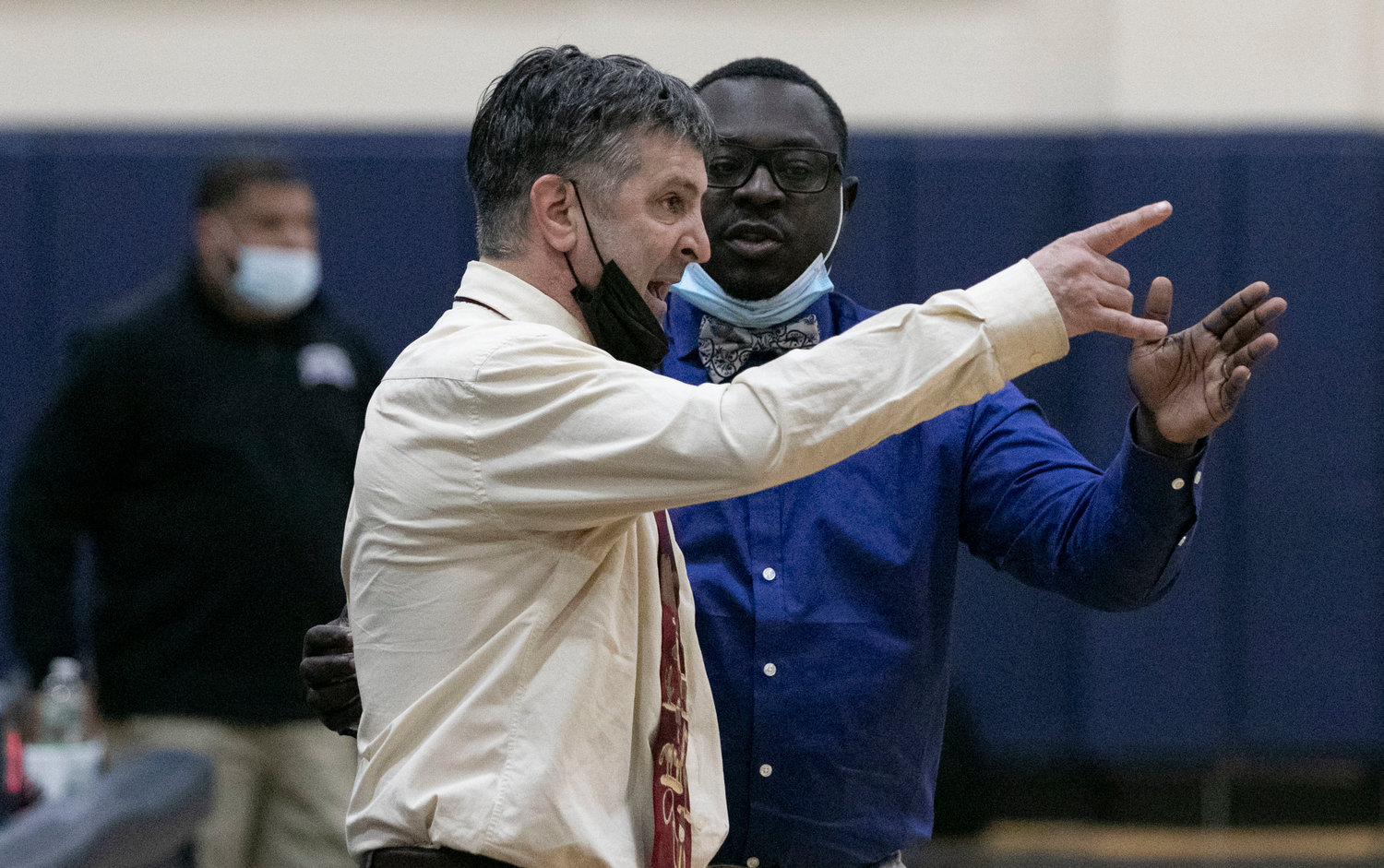 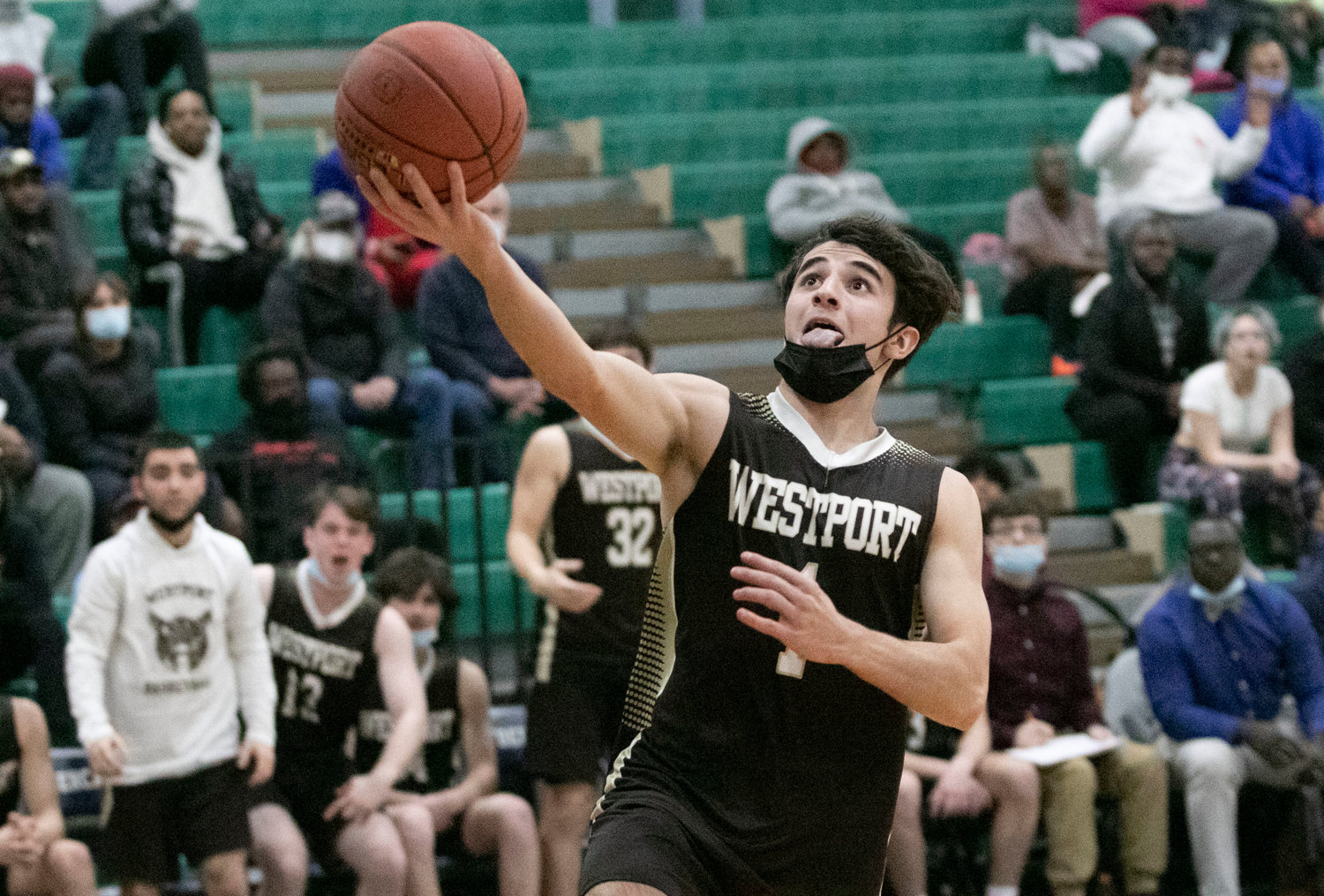 “When Hunter Brodeur wants to turn it on, there aren’t many kids who can stop him,” said Coach Boudria about his senior co-captain.
Previous Next
Posted Tuesday, December 6, 2022 9:18 am
Story and photos by Richard W. Dionne, Jr.

Last season the wildcats played Paulo Freire to the death in the Division 5 Sweet 16 in Chicopee on a frigid, stormy Wednesday night. It was a dog fight that wasn’t over until the buzzer and then Panthers went on to play in the finals and Westport took a snowy two-hour bus ride home.

The sad part is not the loss," said Westport head coach Scot Boudria after the game. "It’s that the season is over. I don’t get to go to practice tomorrow and see those twelve kids. You get to see their personality and you get to look at their hearts.”

During a Wildcats practice on Wednesday, Coach Boudria spoke fondly of this year’s group of seniors and said that the sky is the limit when it comes to titles and championships. Though Westport has never won a championship in any sport, Coach Boudria, 53, has been to five final-fours with the Wildcats and has won a championship as an assistant coach at Dartmouth in 2005. He teaches Biology at Dartmouth and has been coaching basketball for 30 years, two years at North Carolina, 11 years at Dartmouth High School, and 17 at Westport. He has have been through thick and thin with this team. He has seen them all grow up with his sons Ben and Owen. Sleep overs, dinners, youth leagues.

“I’ve been coaching these guys since third grade. They have been to all of my camps. They have worked my camps. They have all slept over my house. I know all of their parents very well. This group is pretty special to me,” Coach Boudria said. “This year is going to be real tough for me at the end. I’m a very sentimental guy.”

He is excited about the season and thinks this team has what it takes to win the Mayflower conference and make a deep tournament run. “This team is light years ahead of other teams when it comes to teaching offenses and defenses,” he said. “They already know what to do. They have been doing it since third grade.”

Both of his sons, Ben a senior and Owen a sophomore, will start along with senior sharp-shooter Hunter Brodeur. All three are clever basketball players that play the game hard. They are athletic and play extremely physical, leaving every ounce of blood and sweat out on the court.

Owen is an athletically gifted scorer. He is multitalented and will need to score a bunch for the Wildcats to succeed this season.

“Owen has three things that you need,” said Coach Boudria. “The mental capability to understand the game, an intellectual ability to read the court. He goes home and watches the game film on his own and then asks questions about it. He looks for weaknesses and how he can exploit it. He also has the athletic ability to do it. He can jump and run really well. He has great hands and he’s got a jump shot where he can elevate over opponents and shoot it. Which few high school kids have. And he has the support of his teammates. If you have those things, you can do well.”

Last season he deferred to senior players too much, instead of taking open shots. This season he will have to be the man. “He averaged eight points a game last year. He can’t do that this season. He has to score a lot more than that,” Coach Boudria said. “With another year of AAU ball under his belt, his skills and confidence levels are high.”

The Boudrias have always been told that their jobs on the court were different. Ben, though not as athletically gifted as his younger brother, has his father’s intelligence and will to win. “Ben was always my fighter,” said Coach Boudria. “He’s like a dog on a bone. Him and Hunter, that’s how they play. They will dive on the floor and do anything they have to do to win.”

The Boudrias learned to embrace their different rolls and their teams have succeeded. “That’s a tough pill to swallow for a kid who’s two years older,” Coach Boudria said. “I give him a lot of credit for being smart enough to understand that.”

Then there’s Brodeur, “I’ve seen him get so incredibly mad and crush people like no one’s business,” Coach Boudria said. Brodeur led the team in scoring as a sophomore. He can shoot the three and elude taller players and get to the basket. His specialty is making steals off the press and beating teams down court. He has been a close friend of Ben and the Brodeur family since childhood. The two had played basketball and soccer together, grown up at each other’s houses, gone on family trips, cookouts. It was natural for Coach Boudria to have them serve as senior captains this season along with Cam Leary, a senior guard who came off the bench last season and will take on a starting role this year.

“Hunter is a very, very special young man,” lauded Coach Boudria. “He has a special place in my heart. He is an amazing athlete. When Hunter wants to turn it on, there aren’t many kids who can stop him.”

Coach Boudria told a story of the famous Barnstable tournament that many of the Wildcats played on as seventh graders. The Westport youth team played against loaded teams and on most years, they would get bounced in the first round. The team would still have a blast as they would hang out and have dinners together. Coach Boudria who didn’t normally coach the team, was called in as an emergency coach due to a conflict. That year, the team won every game and made it to the finals against Plymouth North who had won the tournament two years in a row. “They had kids that were absolutely studs. I told them, don’t be happy that you’re here. Be happy at the end of the game when you lift up the trophy.”

Westport was up by twenty in the first half. But got into foul trouble and held on to win by two, he said.

“We beat some really good teams and they all came together. That’s this senior class,” said Coach Boudria. “Hunter was amazing. If we scored 58 points, Hunter had probably 30 of them. They were doubling him and he could not be stopped.”

Coach Boudria normally rotates eight players, three guards and five front court players. Vying for those spots on the team are Max Morotti, an excellent pitcher for the Wildcats, Coltrane McGonigle and Nick DosVais both star soccer players and Owen Fredrickson an athletic beast. “All of these kids are good athletes. It’s a small school. You get to play multiple sports, which I love,” Coach Boudria said.

The Wildcats will be one of the most experienced teams in the division and one of the toughest according to Coach Boudria. “If you’re going to beat us, you’re going to have to earn it,” he said. “There’s no way that we’re not going down without a fight. We don’t lay down for anybody.”

The team emulates Coach Boudria who was 5’8” and 126 pounds in high school. He said he was a “non-talented player,” but he played like John Stockton, diving onto the floor for loose balls, jumping into the stands to keep a ball in play. He was cerebral, quick and played hard to overcome his weaknesses. He still plays that way with his sons.

“They don’t like playing with me,” he said. “Owen laughs, because he can get by me every single time. But Owen also knows, that I’m not going to get dunked on. I tell him, I don’t care if you’re my son, I will take your legs out.”

Last year the Wildcats lost four games. Two of those were to West Bridgewater in overtime.

“Mike Antonio does a really good job,” he said. “They have a lot of height. The Covid year, we beat West Bridgewater twice and won our little Mayflower championship title. But It’s always pretty hostile when you go to West Bridgewater. The fans take it to us pretty good.”

Coach Boudria isn’t looking past any of the teams that the Wildcats have to face this season, but he has bigger goals for this year’s team.

“My aspirations are for a state championship this year. I think we have the talent to do it. You need health. That’s where my biggest question mark is. If one guy goes down, it’s a big deal. Small school’s don’t have depth. If any one of our guys gets hurt, we are a different team. And we’ll struggle against really, really good teams.”

The Wildcats scrimmage Somerset Berkley, Old Rochester and Dighton-Rehoboth, before hosting Fairhaven in the season opener on Tuesday, Dec. 13, at 6:30 p.m.

They host Southeastern on Friday Dec. 16, before traveling to Blue Hills Regional on Dec. 21.

The Wildcats play, Bishop Stang, East Bridgewater, Atlantis Charter, West Bridgewater, Holbrook, Bishop Connolly, and Avon. Most teams have a home and home series with Westport. None of them are layups.

“There aren’t any teams that we can just mark as a win,” he said. “We’ve got to go out and earn it. That’s what makes it fun,” said Coach Boudria.