The writer’s studio – From RV garage to a relaxing home

A former RV garage, now spectacular home, sets the scene for the homeowner/author who finds inspiration in Little Compton

Architect Gale Goff has enjoyed her share of unique projects. This Little Compton hideaway skews to the “unique” end of the spectrum.

Dubbed “The Writer’s Studio” (by …

The writer’s studio – From RV garage to a relaxing home

A former RV garage, now spectacular home, sets the scene for the homeowner/author who finds inspiration in Little Compton 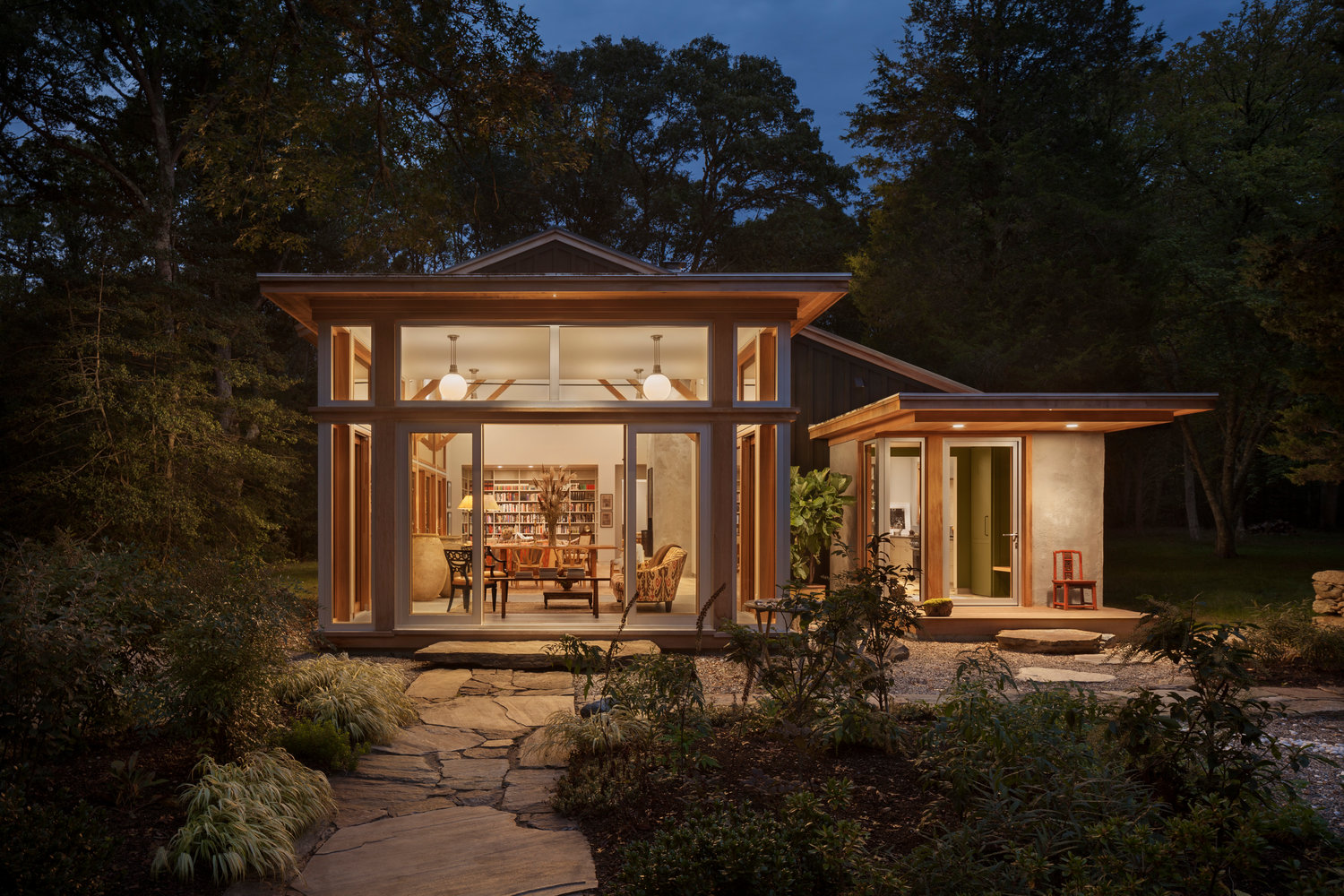 Once an RV garage, this home now sparkles day or night. The roofline in the background reveals the original garage, before two additions were constructed (garden room to the left, entryway and mudroom to the right). The elegant library was a featured element in the design.
Photography by Anthony Crisafulli 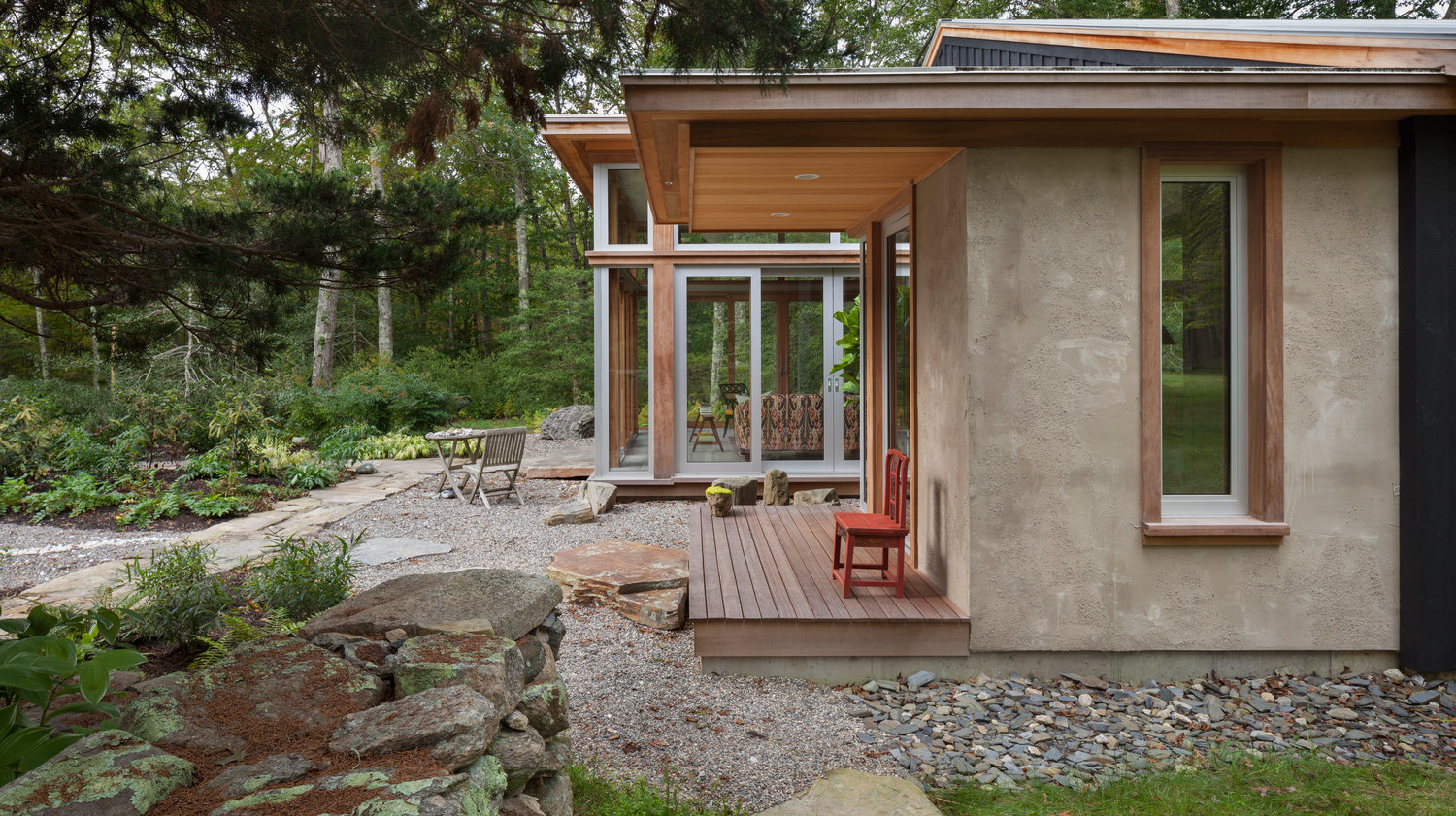 Everything shown here was carefully designed and put together — the two additions to the main structure, the landing, the entryway, the overhangs, the pathways, the sitting stones, the landing stones, the plantings.
Photography by Anthony Crisafulli 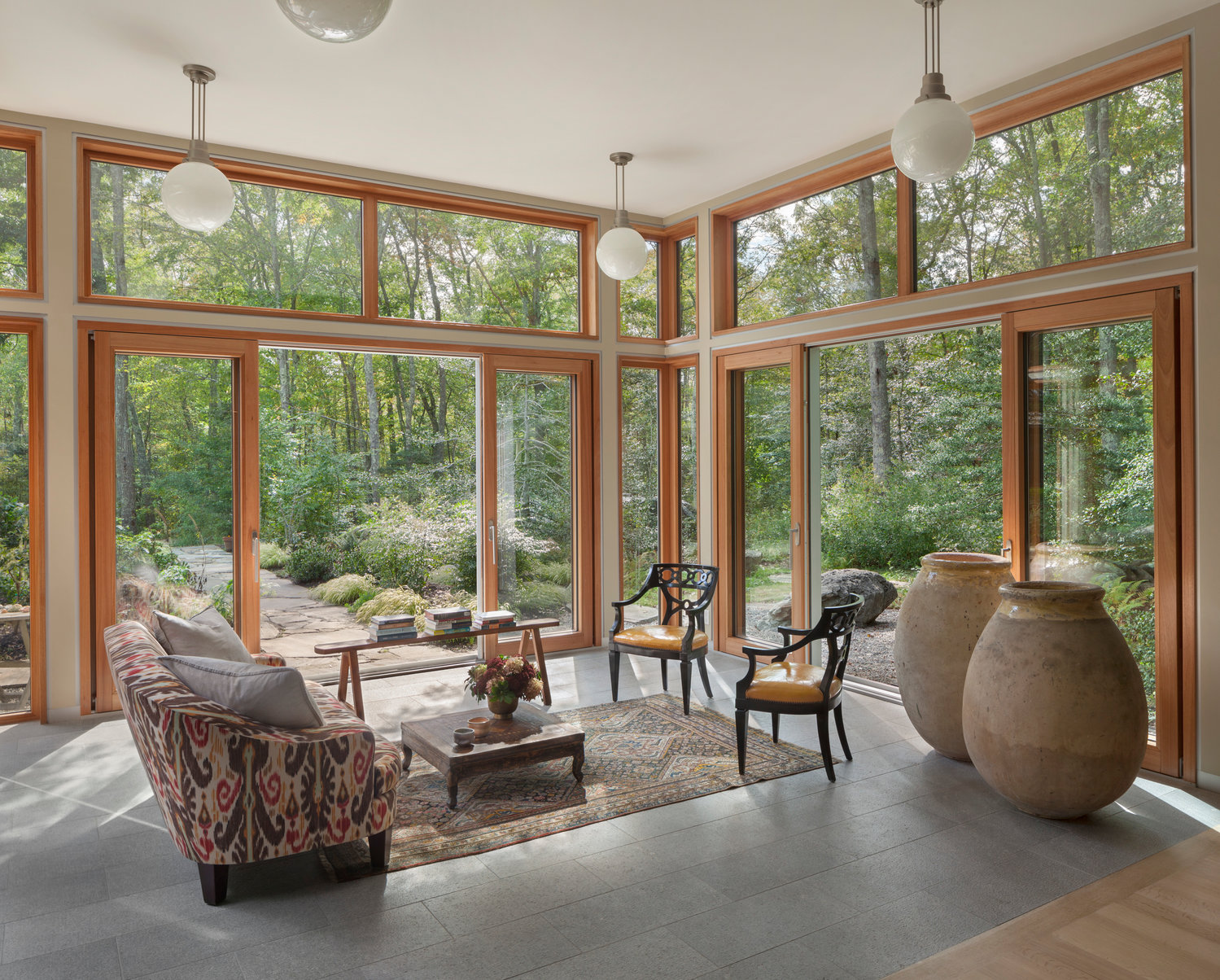 The garden room, or sunroom, showcases the simple elegance of the space, with walls of windows opening the home to the beautiful natural surroundings. This transitional space connects the entry courtyard to the primary living area.
Photography by Anthony Crisafulli 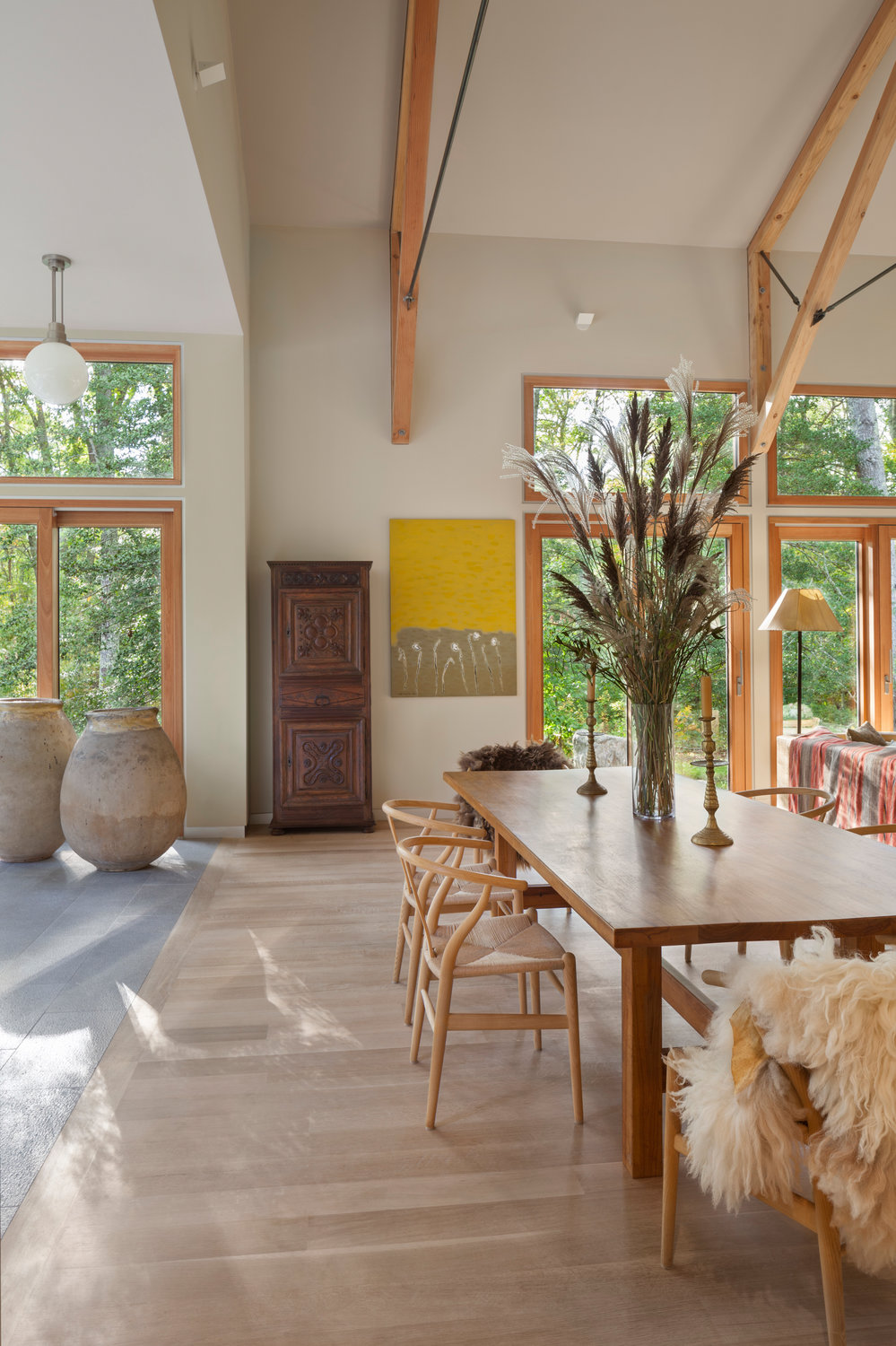 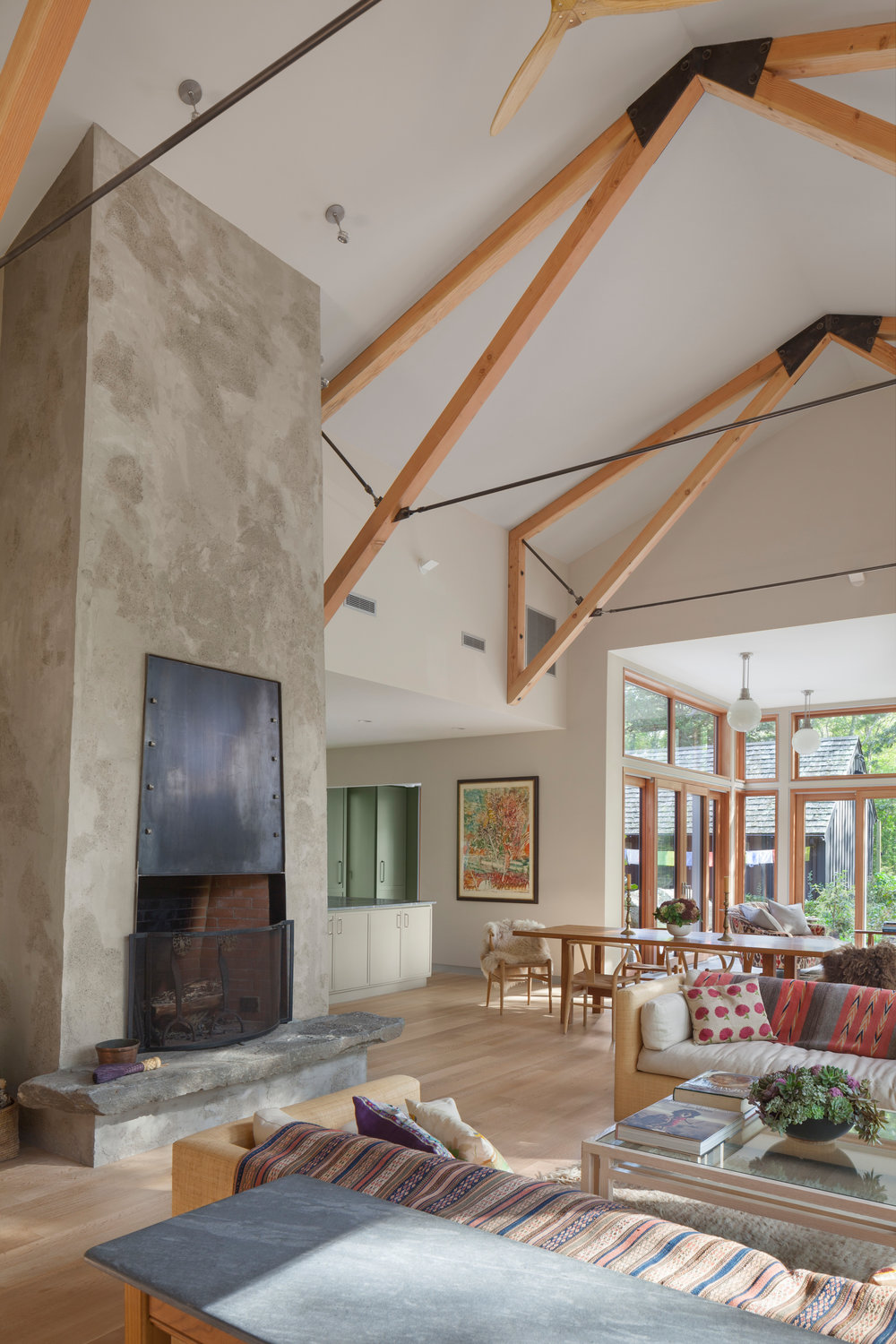 The towering chimney and bold trusses are important features. “This is a big space, so you need big elements,” said architect Gale Goff. “You can’t ignore what’s over your head, you want to design the entire space.”
Photography by Anthony Crisafulli 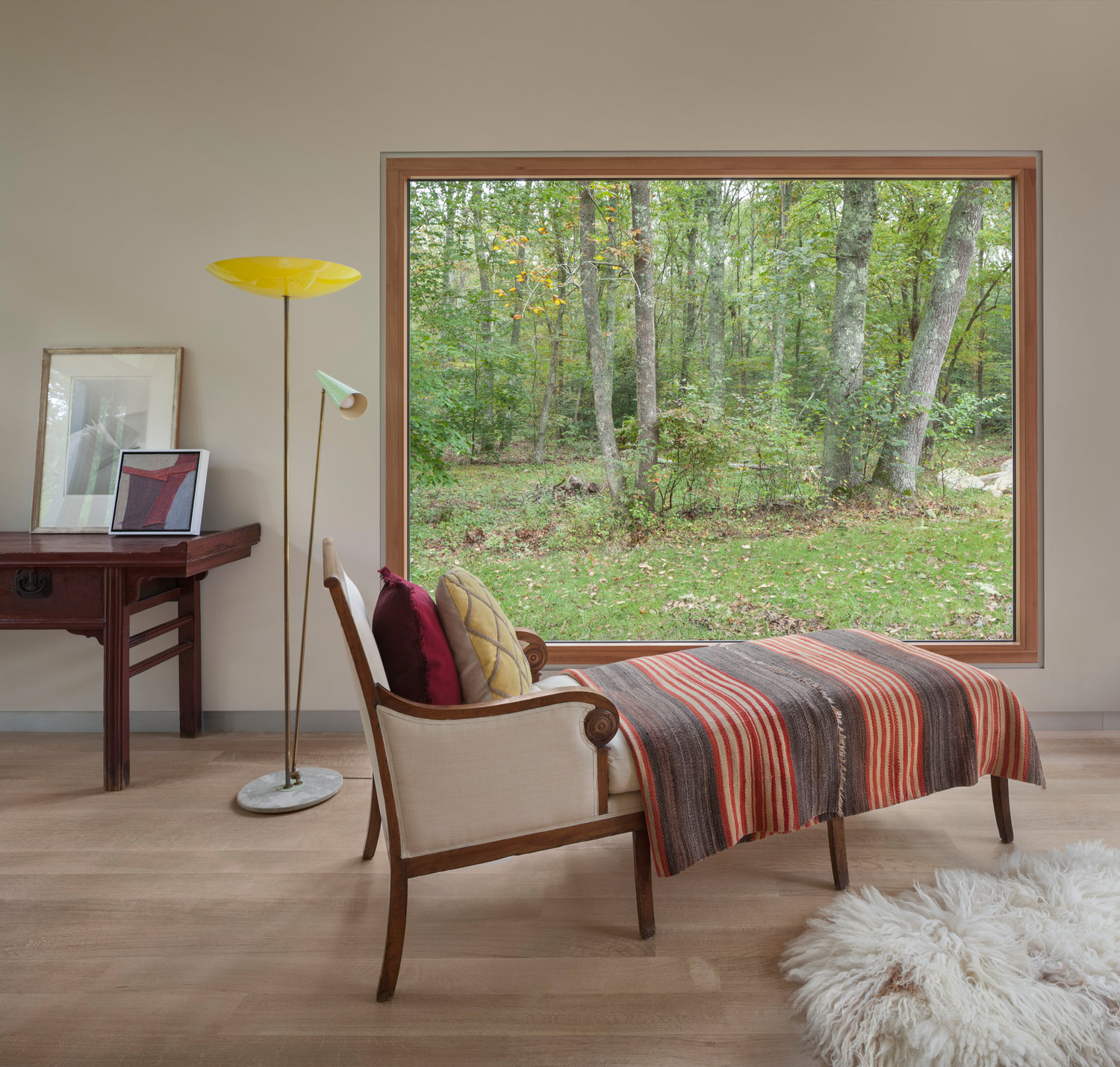 This enormous window was actually designed for the piece of furniture that sits in front of it. Also featured here is the seemingly simple but remarkably intricate trim around the windows. Rather than installing exterior trim to surround the windows, they built recessed trims. “By doing that negative groove, we’re using shade and shadow as part of the trim,” the architect said. It’s a lot more challenging than wrapping trim around the outside. “When you’re building with the simplest of ideas and lines, everything has to be perfect,” she said.
Photography by Anthony Crisafulli 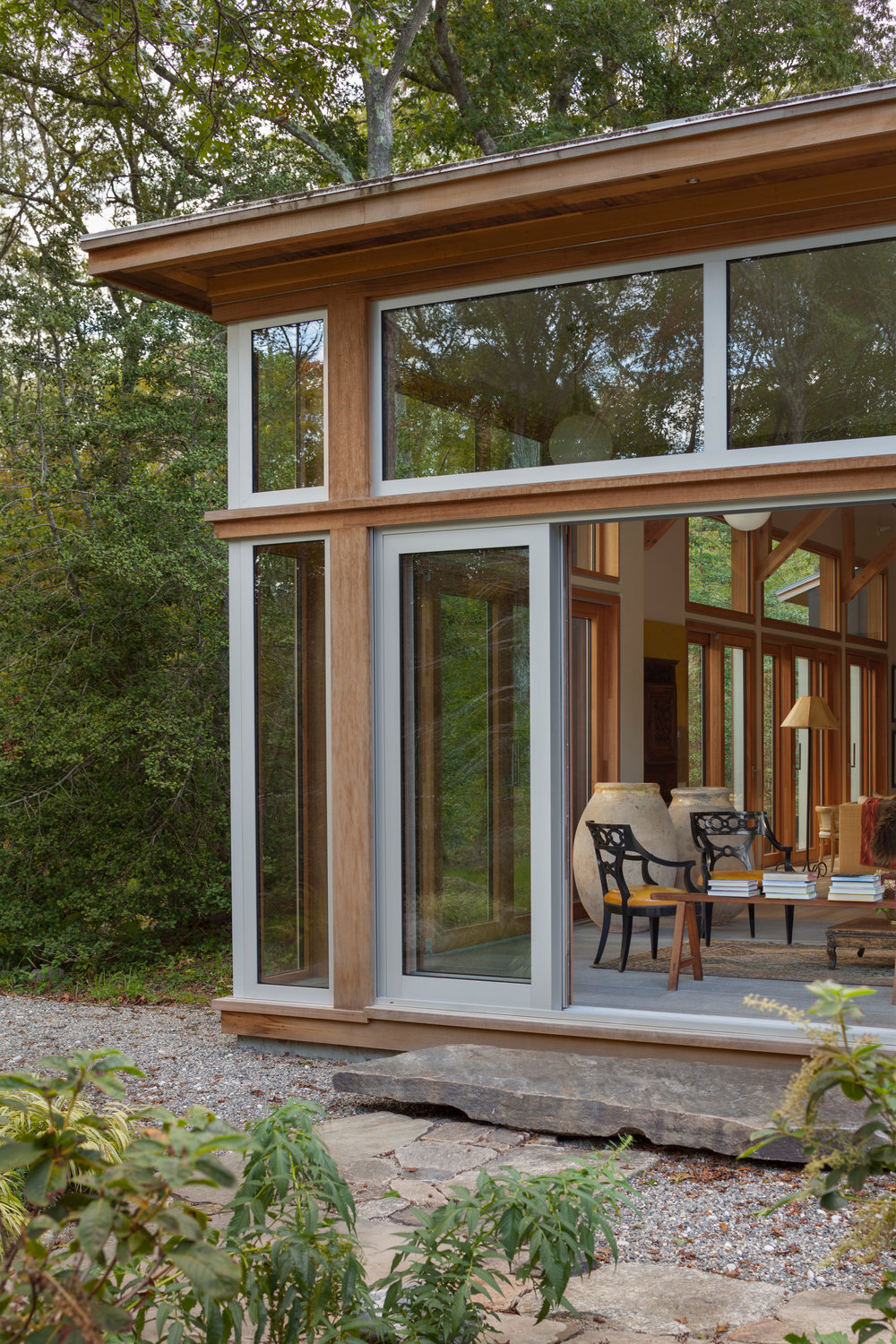 Architect Gale Goff has enjoyed her share of unique projects. This Little Compton hideaway skews to the “unique” end of the spectrum.

Dubbed “The Writer’s Studio” (by Gale herself), this property was bought by an accomplished author looking for a second home. When purchased, it featured a small cabin, a large garage sheltering two RVs and a lot of trees. The new owner wanted to keep the cabin as a guest house and convert the RV garage into her home.

The results are spectacular.

The shell of the RV garage remains, with additions built to the front of the original structure (creating a transitional garden room and mudroom/entryway) — and a whole lot of upgrades within.

“You take the basic structure and you strategically put a lot of holes in it,” Gale said, offering the simplest description possible of a project that took about two years, from the start of the design process to completion.

“The property is quite beautiful,” Gale said. “First, we were very selective about which trees stayed and which needed to be pruned.”

The landscape was critical, as the design team wanted the home to blend with is surroundings, with lush, natural privacy enveloping the space, and the pruning helped bring light where they wanted it.

Inside, they worked with whatever the garage offered them. The high roof of the garage (built to house an enormous RV) became a critical part of the design, with large trusses featured for both structural support and visual appeal.

They placed windows in strategic locations for selective views, with many placed up high, maximizing the natural light coming from the wooded lot into the home. “We were able to get the glass up high, which pours a lot of light into the space,” Gale said.

Not surprisingly, the owner has an impressive collection of books. A library was an essential part of the design.

You might assume furnishings were the last step in the process. They were, and they weren’t. Several of the owner’s items were factored into the home’s design, like the lounge chair in the master suite.

“This client had a wonderful design sense,” Gale said. “She had a lot furnishings that we incorporated into the design.”

In the end, the “Studio” works. Simple, elegant and natural, it sets the scene for inspiration.