Cherished heirloom furniture doesn’t have to be decades old to be treasured. Our area is fortunate to have talented craftsmen who are creating pieces today that will be passed down for … 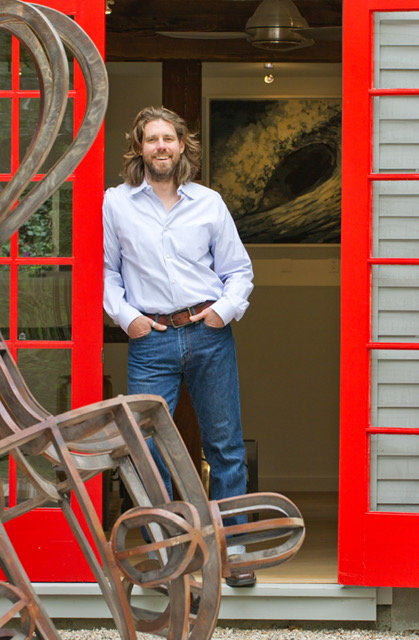 Jeff Soderbergh produces an array of unique pieces, most made from recycled or reclaimed materials.
Dorothy Greco 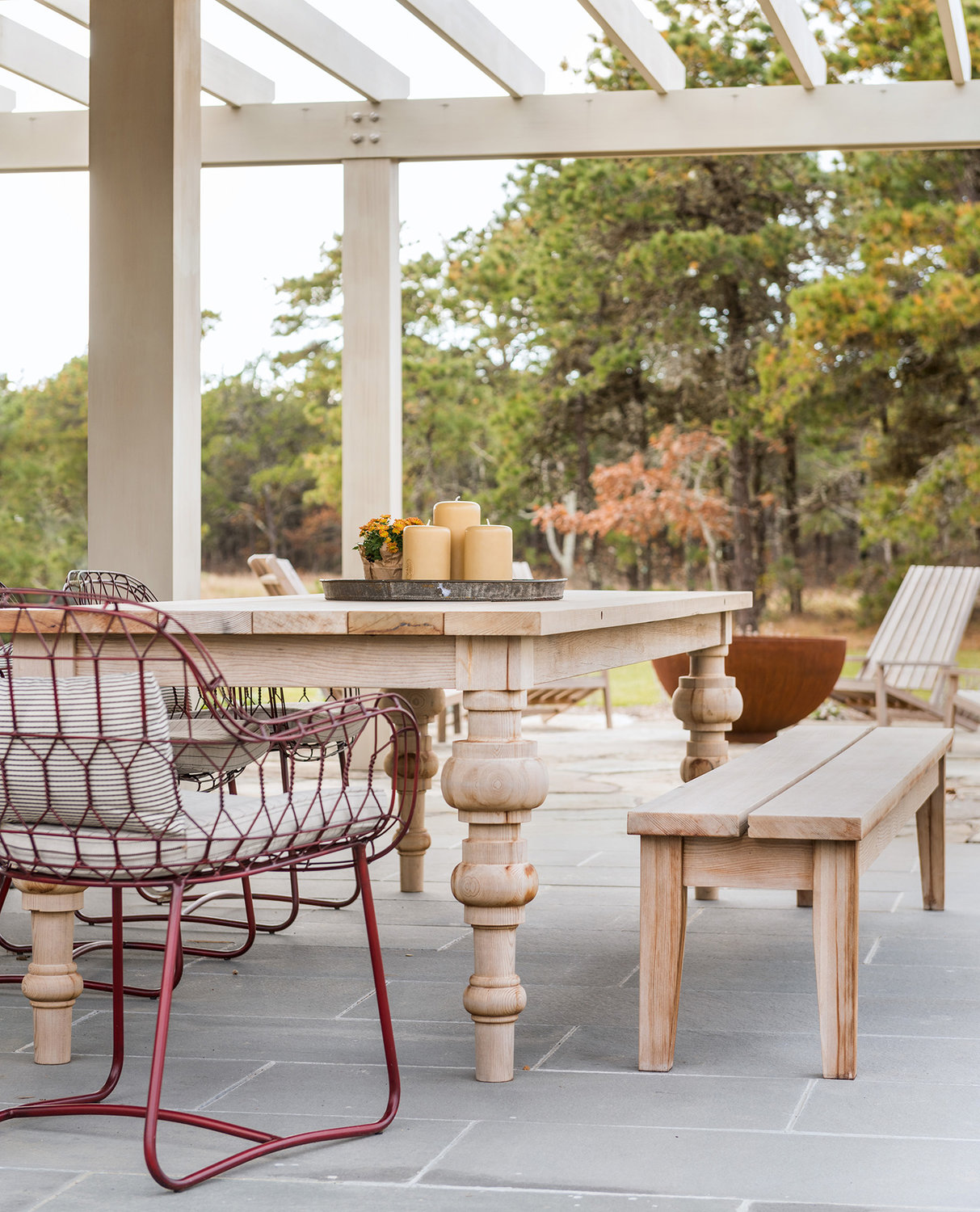 This Jeff Soderbergh exterior table and bench, inspired by an antique Parisian table, was made with reclaimed late 1800s redwood from a Portsmouth, N.H. navy yard.
Nat Rea 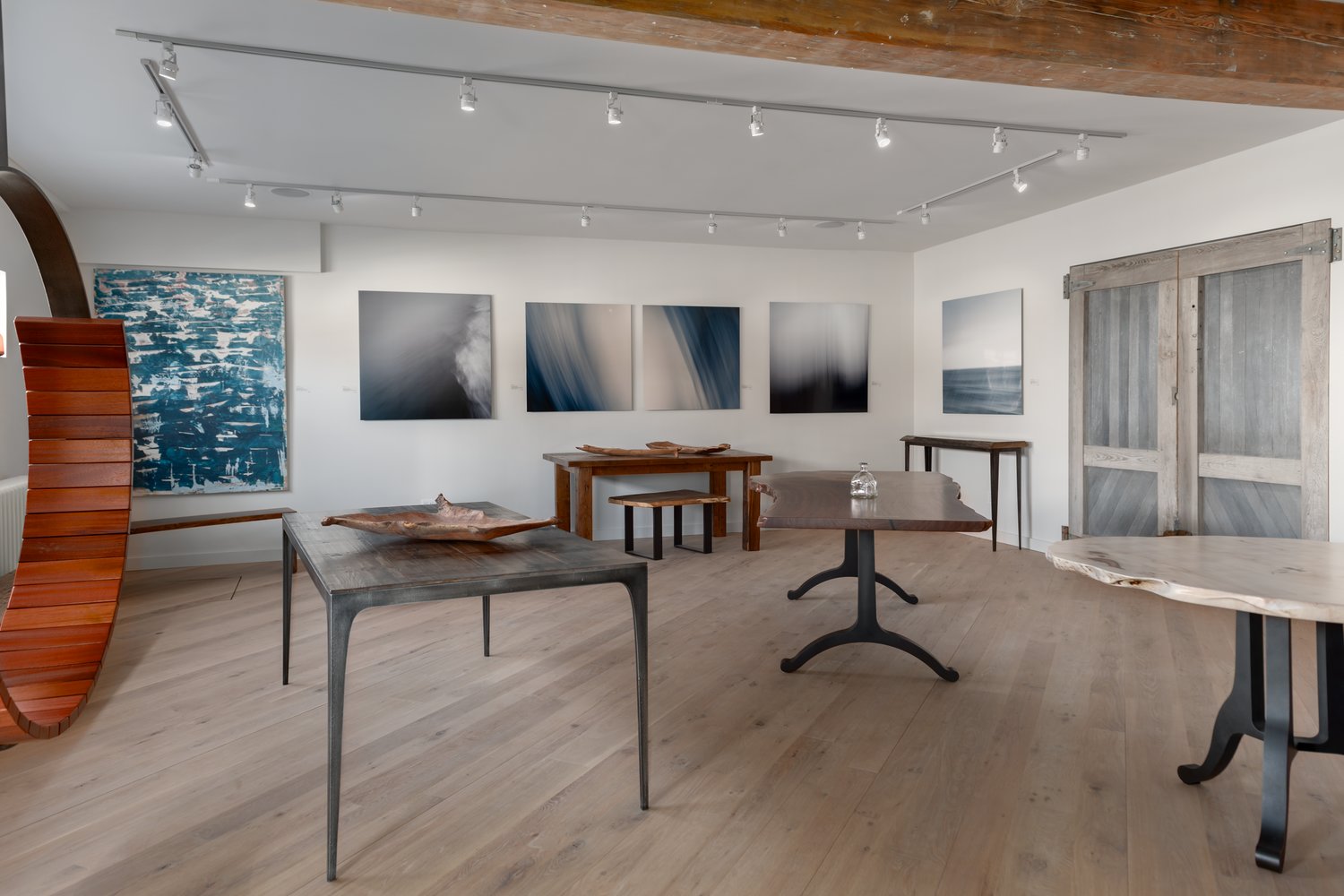 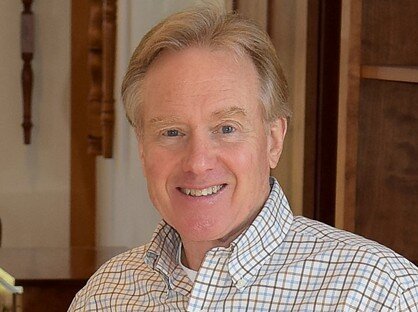 Gary Adriance has been building heirloom furniture for more than 40 years, beginning with a showroom that was inside his house. He later built his own showroom in Padanaram. 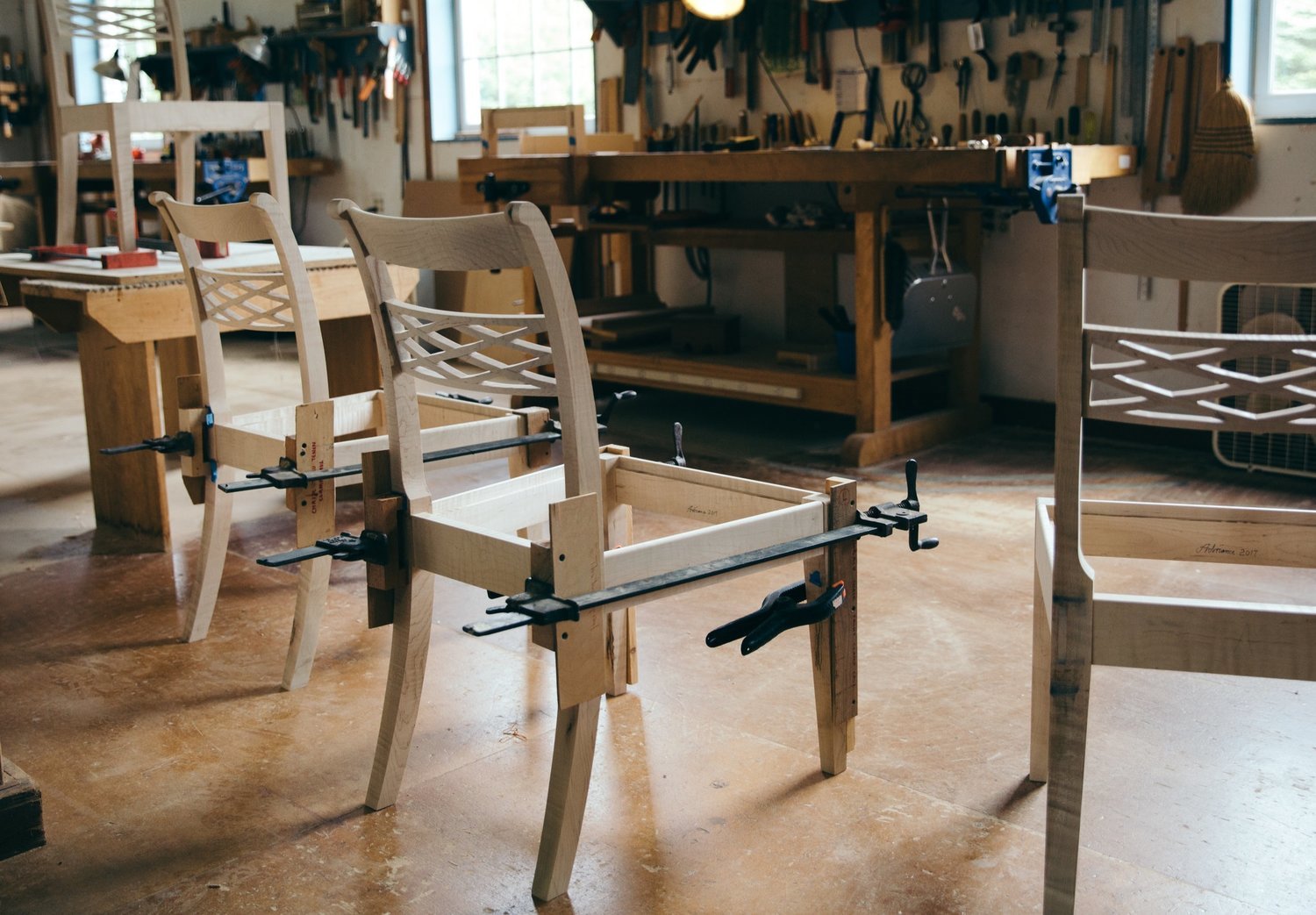 A set of chairs, under construction, by Adriance. 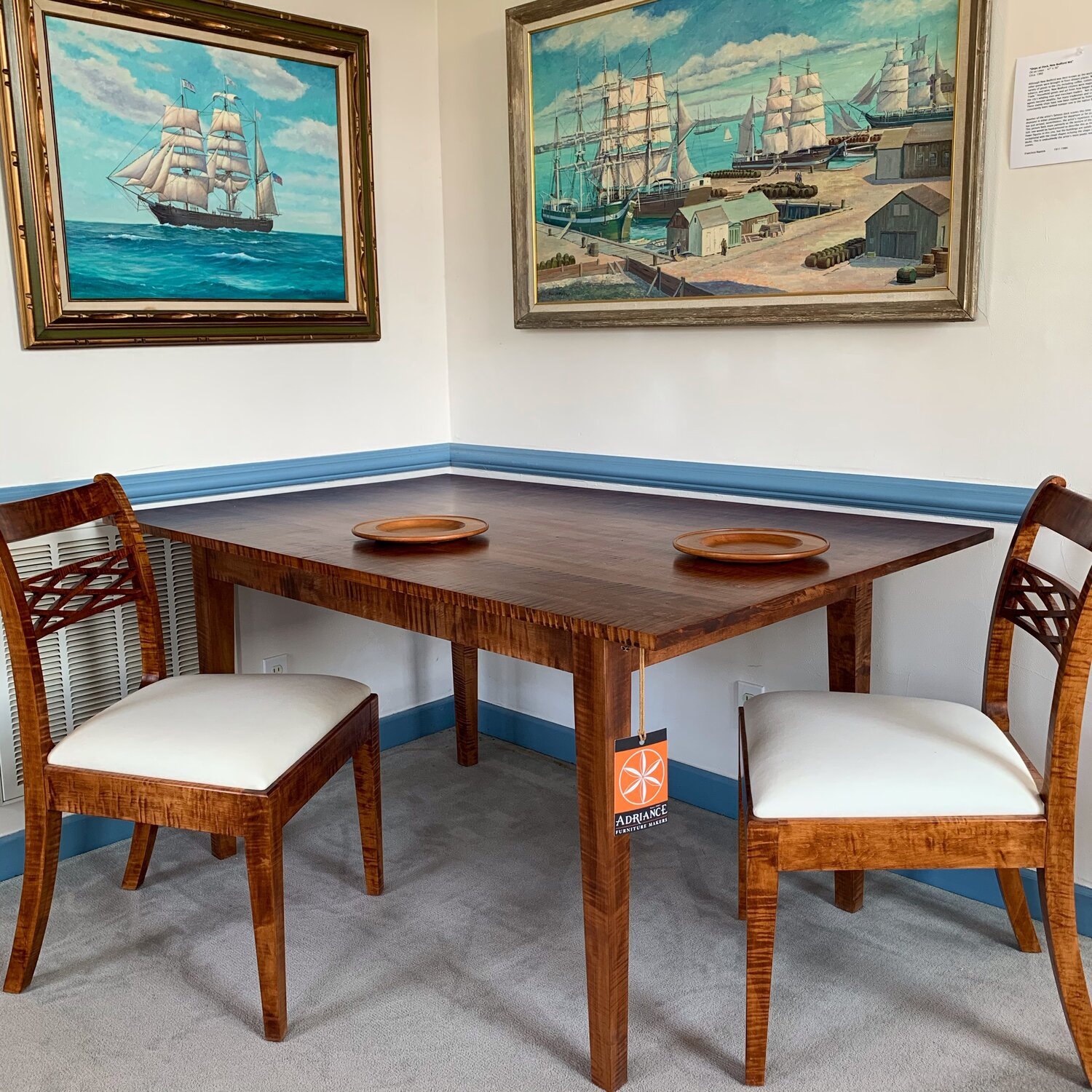 A set of chairs, finished, by Adriance. 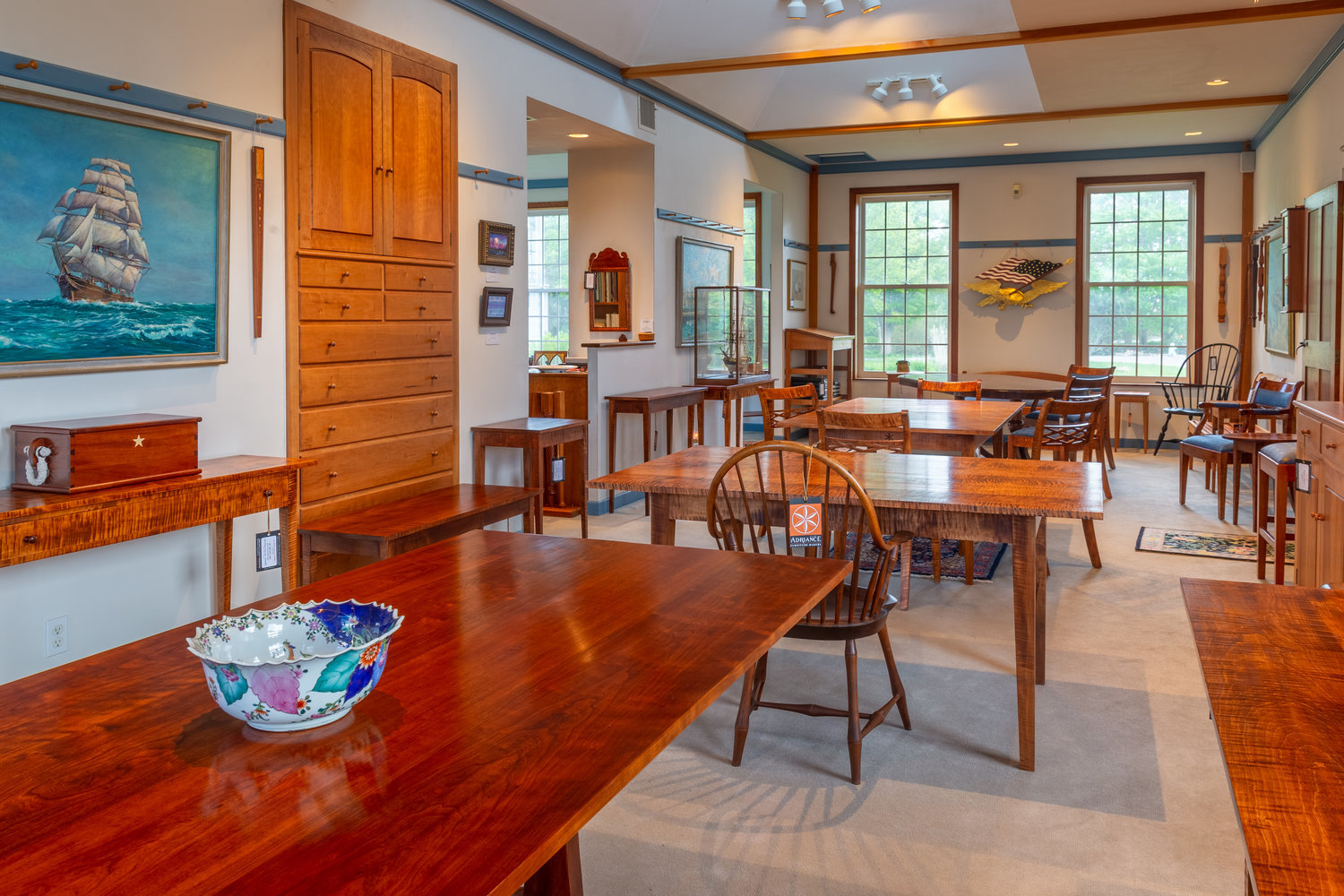 A look inside the Adriance showroom. 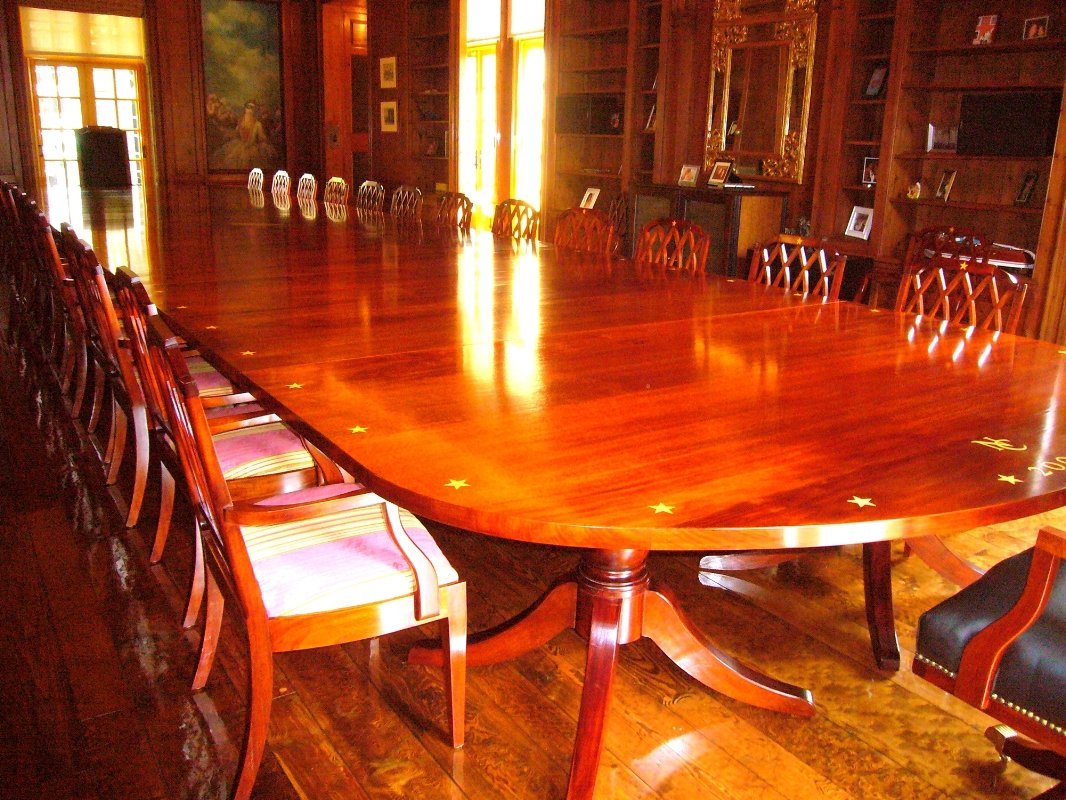 Gary Adriance built this magnificent table for actor Nicolas Cage when he moved to Newport. It has about 475 inlaid elements, is 35 feet long and seats 26 people.
Previous Next
Posted Friday, April 22, 2022 7:00 am
By Lucy Probert

Cherished heirloom furniture doesn’t have to be decades old to be treasured. Our area is fortunate to have talented craftsmen who are creating pieces today that will be passed down for generations to come. Mixing traditional with contemporary styles makes for an updated look, while working with sustainable materials makes the investment well worth it.

From early on as a furniture maker/designer, Jeff Soderbergh knew he wanted to work with sustainable materials and make high quality, one-of-a kind pieces.

“There are already enough materials in existence that we can use to create something beautiful,” he says. In his Portsmouth workshop Soderbergh and his team work with wood, metal and stone to create the finest sustainable hand-crafted pieces with a contemporary or vintage design. From a dining table made with late 1800s reclaimed redwood from a navy yard in New Hampshire, to a console table created using vintage boxcar flooring from 1940s freight trains from Chicago, his custom pieces are extraordinary.

“I have a huge collection of material I’ve collected for over 30 years, as well as a network where I can access even more,” Soderbergh says. “Just about everything that comes out of here is from recycled content, from beams or floorboards found in an old factory, to metal from a shipyard or old cobblestones,” he says.

He also works with clients who want him to use their own reclaimed material. “It might be something from an old property that has meaning to them. It’s a connection they want to keep, and we weave their stories into what we make.

With recent wind storms in the area, Soderbergh has also retained local walnut and maple from fallen trees.

“We gather as much as we can without buying from a lumberyard. It’s already out there, so we’re keeping it out of the landfill.”

Soderbergh had his eye on his current showroom on Island Park in Portsmouth for almost 20 years before he bought it and opened in late 2019.

“It was an old printing company that had incredible bones,” he says. When they moved in, he ripped up carpeting, laid down five different kinds of reclaimed floors, exposed existing beams running through the space and built sliding barn doors. “We celebrated what was already here,” he says.

What he wanted was a place where people can come in and anything they see, can be built for them, he says. “From the furnishings to the reclaimed wood floors to the art on the walls and the light fixtures, it’s all scalable. So we welcome one and all to visit so we can talk about budgets and creating something special together,” he says. He also has a showroom in Wellfleet on Cape Cod.

Describing himself as “100% self-taught,” Soderbergh has created more than 1,000 tables over the years and recognizes that it’s a niche he can embrace.

“I’ve made everything from wall art to sculptures to all types of furniture, but tables are special. They’re really the altar of a home,” he says. “It’s where we pass our time together in moments that seem ordinary, but over a lifetime it’s where we create memories. Good and bad news is shared there, celebrations and comfort. Creating these tables is a wonderful thing to leave behind when I leave this earth.”

“Early on in my career I spent a lot of time in museums studying their antiques,” he says. “I would ask for permission to touch old pieces and measure them. It was the basis of what I still do today. It’s a unique and simple style.”

Adriance furniture designs include Shaker, Colonial and Federal, using native cherry and tiger maple wood selected from sawmills recognized by the Forest Stewardship Council for sustainable forestry. “We have pieces that are basically borrowed from history, but the iteration you see is a reflection of my lifestyle,” says Adriance.

His offerings include dining and occasional tables with beautifully tapered legs, desks with drawer sides joined with hand sawn and chiseled dovetails, as well as beds with hand-turned posts and matched-grain wide headboards.

Each piece is carefully cut, crafted and inspected by Adriance before it leaves his workshop and also includes his trademark starwheel symbol. His customers are loyal, and word of mouth is his best advertising.

“I like to say everything is built and priced for the South Coast audience,” he says.

Like the fashion industry, furniture styles change, and Adriance works to keep up with the times. “In the early part of my career period furniture was in demand. Now the trend is more towards contemporary, so although I specialize in traditional themes I have adapted and kept abreast of what is happening today,” he says.

Adriance won the Bulfinch Award for Craftsmanship and Artisanship from the Institute of Classical Architecture & Art for his Federal Demilune Hall Table in 2013. “This mahogany table, which has about 475 inlaid elements, was a tribute to a masterwork by John Seymour of Boston, circa 1794, which sold at auction for over $540,000 in 1998,” he says.

About 15 years ago, when Nicolas Cage bought a home in Newport, he commissioned Adriance to build him a table, which he did: A 35’ x 8’ mahogany table in seven sections with 56 legs, 26 chairs and the actor’s initials, the date and his studio logo, Saturn, inlaid into the massive top at the table’s head.

When he built his own post and beam home with a barn in the back for a workshop in Padanaram Village in the early 1980s, his showroom was inside the house. “My wife Laurie came home from work one day and our bed was gone because I had sold it,” he says. Their dining table and children’s beds went out the same way. “Local people sought us out. By 1990 we had outgrown the barn and built the showroom and 5,000-square-foot workshop where we are today on Gulf Road.”

With no plans to move, he’s become ingrained in his community. “My customers have become my friends,” says Adriance. “And they allow me to do what I love. It’s incredibly soul satisfying.”