Blount is expected to deliver the four vessels to AOS for three different wind energy companies — Vineyard Wind, Ørsted, and Siemens — between 2023 and 2024. 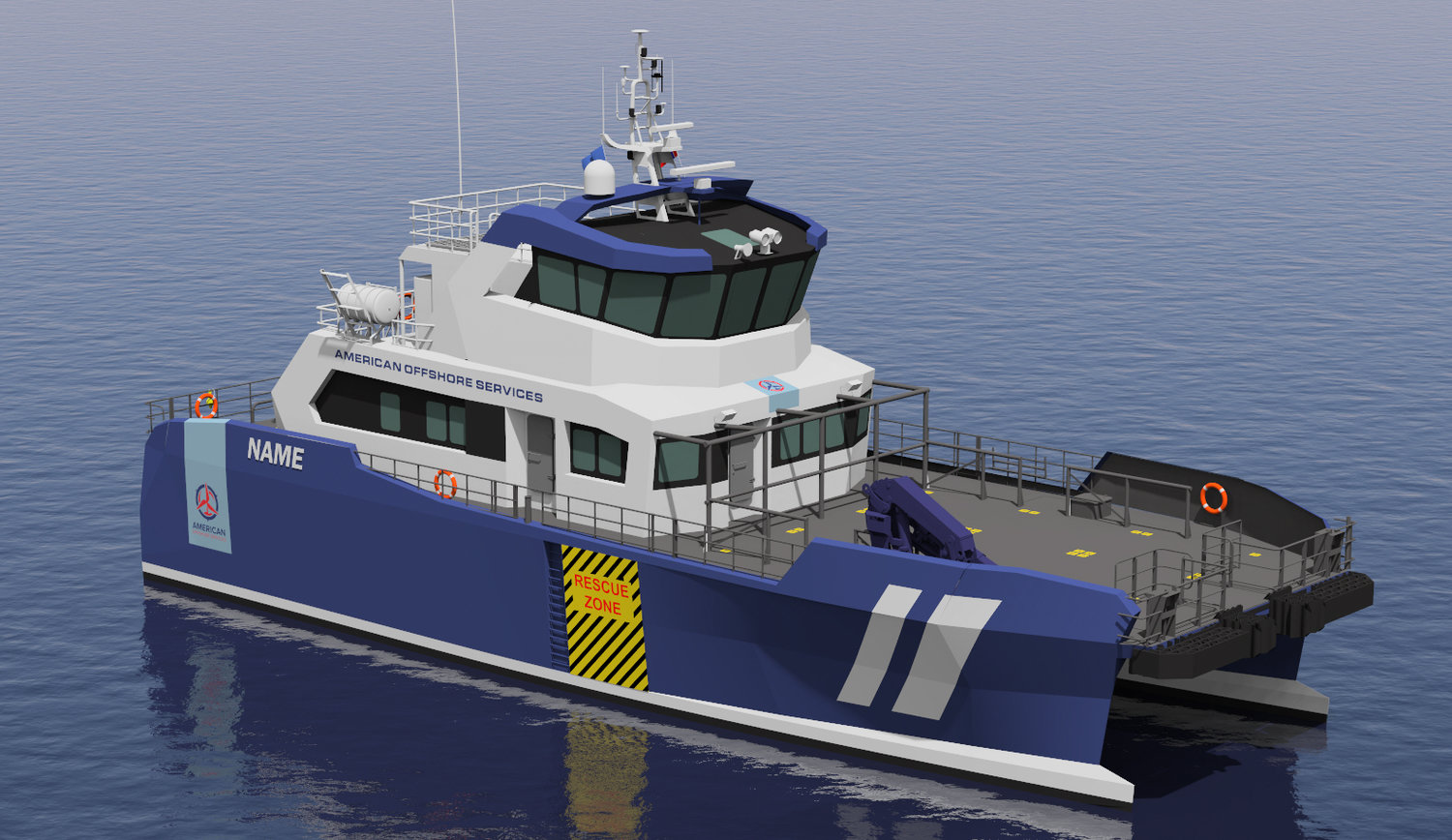 A rendering from NOF shows what the crew transfer vehicles (CTVs) may look like once constructed by Blount.
Posted Thursday, December 2, 2021 3:02 pm
By Ethan Hartley

Blount Boats of Warren was recently contracted by American Offshore Services (A-O-S) to build four crew transfer vehicles (CTVs) that will be used to facilitate the transportation of technicians in the construction of various offshore wind energy projects along the eastern shores of the United States in the coming years.

Blount is expected to deliver the four vessels to AOS for three different wind energy companies — Vineyard Wind, Ørsted, and Siemens — between 2023 and 2024, which will go into service immediately on various projects along the East Coast.

Marcia Blount, president of Blount Boats, said that CTV construction was a perfect fit for the Warren shipyard in terms of their size and capabilities. They also have unparalleled name recognition in the industry, as Blount Boats built and delivered the first ever CTV in the United States in 2016 — the “Atlantic Pioneer” — which went to work on the Block Island Wind Farm. In 2021 Blount delivered the “Endeavor”, which is now working on the Dominion Energy wind farm off the coast of Virginia Beach.

“Early on, we understood that wind farms were going to be developed and they’d need these types of vessels, and that we can build them,” said Blount. “There have been three built in United States so far…All three CTV boats have been built in Rhode Island, and two of the three have been built by Blount.”

While the advanced, 99-foot, double-hulled catamaran vessels are powered by Volva Penta quad engine propulsion systems, they will also feature the ability to become hybrid vehicles that operate on battery power.

“We’re building it so it can be converted into that,” Blount said. “The wind farm developers are very keen on making the vessels more green.”

Blount said that as the offshore wind industry continues to ramp up in coming years, she expects Blount to continue to be at the forefront of the development of these types of vessels.

“We are getting international recognition for this,” she said. “It’s quite an honor. We have been working towards this for 11 years. Did not happen overnight. There’s going to be a lot of types of boats needed. If they develop all the wind farm leases that have been issued by the Department of Energy, they’re going to need at least 60 vessels over the next few years. We hope to be building many of them.”

In terms of the cost of each vessel, Blount wasn’t at liberty to divulge the exact details.

“These are very complex vessels and very expensive,” she offered.