In Warren, an artistic perspective on rising tides

A new mural on Child Street, combined with multiple other efforts, looks to bring awareness to the dangers posed by climate change and rising ocean waters.

In Warren, an artistic perspective on rising tides 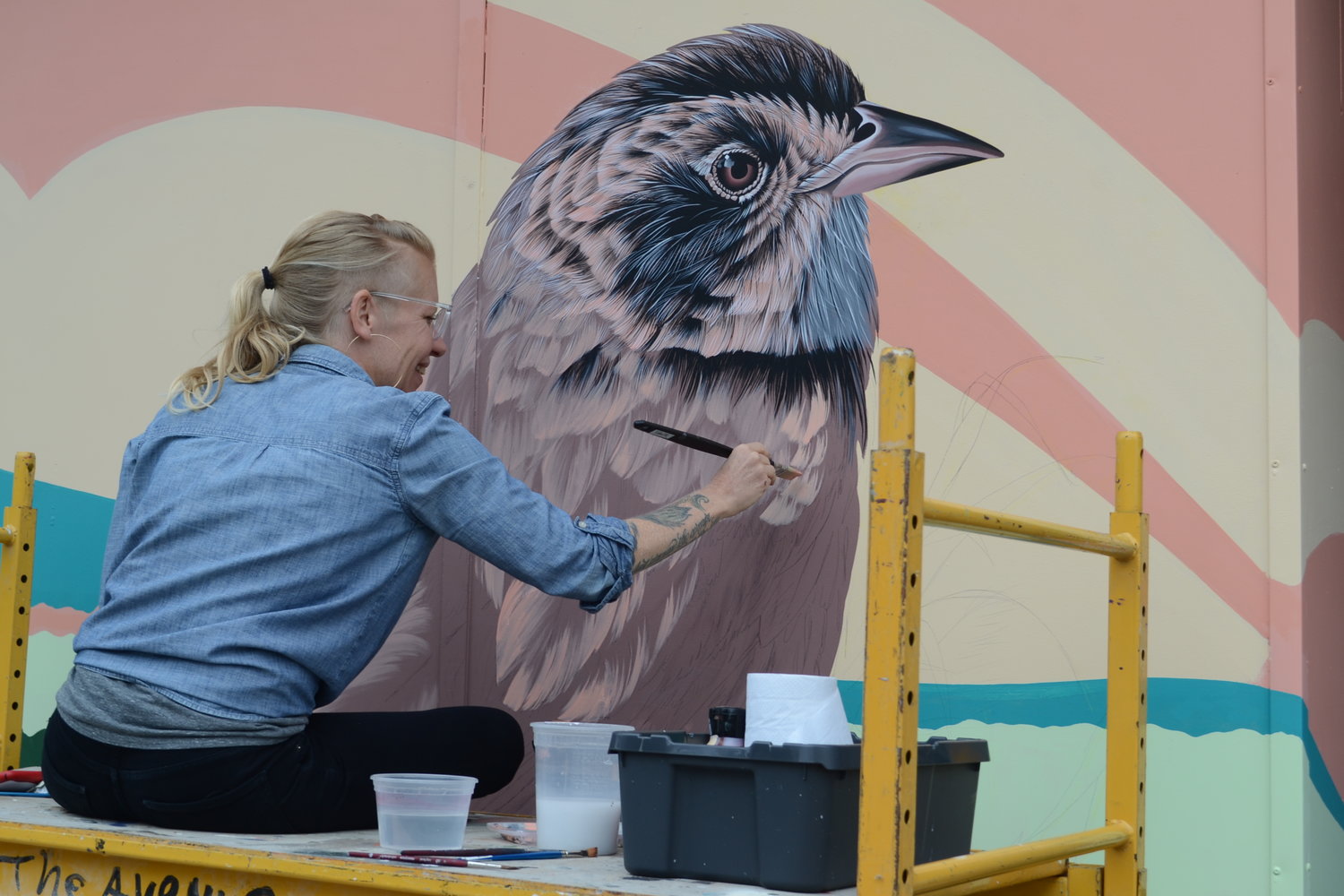 Josie Morway, a Boston-based artist and former Rhode Island resident, in the process of painting a finely-detailed saltmarsh sparrow on a storefront at 24 Child St. It is part of a mural commissioned by the Town in partnership with The Avenue Concept designed to bring awareness to the increasing concern over climate change and sea level rise.
Ethan Hartley 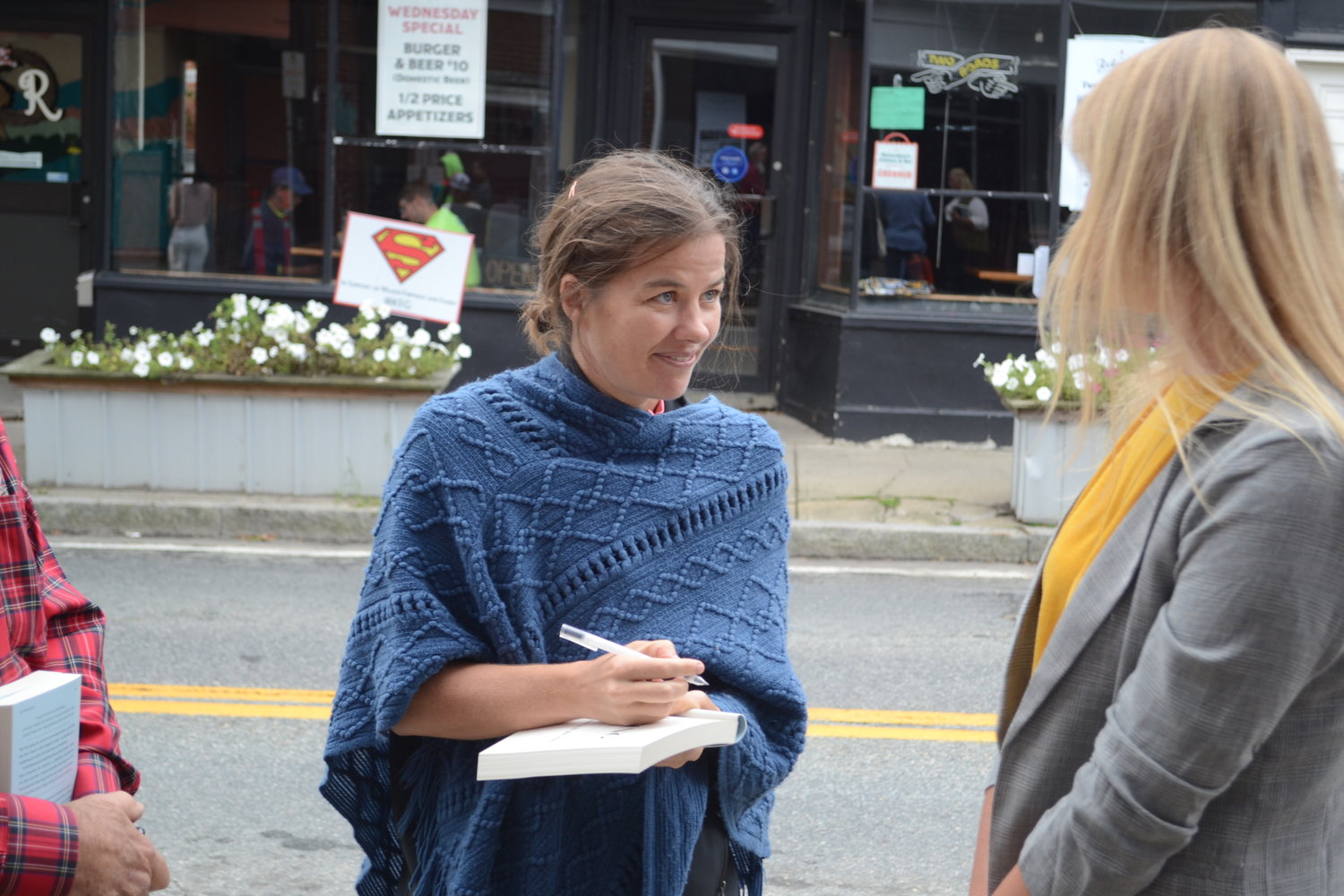 Elizabeth Rush, author of “Rising: Dispatches from the New American Shore”, a finalist for the Pulitzer Prize, signs a copy of her book as part of the promotion of the new mural. Rush’s work served as an inspiration for the mural’s design.
Ethan Hartley
Previous Next
Posted Monday, September 26, 2022 5:03 pm
By Ethan Hartley

A new mural at 24 Child St. undoubtedly improves the visual aesthetic of the vacant storefront upon which the impressive artwork now presents itself.

But to climate change activists, Town officials, and the artists themselves, the mural — which depicts a Jacob’s Point tupelo tree that has died due to an influx of salt water attributed to rising sea levels, and the endangered saltmarsh sparrow, whose habitat and very existence has been jeopardized by the unpredictable rising and falling of the tides — it also represents something more.

“My husband and I moved to Rhode Island 2015 and we started coming to Warren on our bike rides and immediately I could see the impact of sea level rise on the coast here,” said Elizabeth Rush, author of “Rising: Dispatches from the New American Shore”, a finalist for the Pulitzer Prize that served as an inspiration for the mural. “Seeing the town put up this mural and making it central to Warren's identity — the acknowledgement of sea level rise and saying we're not going to run from that. We're going to embrace it and think about how we can be ourselves and be stronger as a result of these changes and this transformation. My heart is very full today because of that.”

Rush’s book opens with a section focusing on Jacob’s Point in Warren, which served as a vital point of reflection throughout her journey to various locations in the United States where she met with people facing immediate and future consequences from climate change.

“At Jacob’s Point I am finally glimpsing the hem of the specter’s dressing gown. The tupelos, the dead tupelos that line the edge of the disappearing marshland, are my Delphi, my portal, my proof, the stone I pick up and drop in my pocket to remember,” Rush writes. “I see them and know that the erosion of species, of land, and, if we are not careful, of the very words we use to name the plants and animals that are disappearing is not a political lever or a fever dream. I see them and remember that those who live on the margins of our society are the most vulnerable, and that the story of species vanishing is repeating itself in nearly every borderland.”

The mural, titled “The Seas are Rising and So are We” came about from a continuing partnership between the town and The Avenue Concept, bringing Boston artist, and former Rhode Island resident, Josie Morway, who was inspired to capture the emotions and stakes conveyed by Rush in her book.

“I’m just hoping to help continue to bring some awareness to the cause,” Morway said. “I really appreciated the book’s honest and pragmatic approach. It’s not just about ‘Let's try to mitigate climate change.’ It's also about ‘This is happening. What are we gonna do?’ How are we going to talk about who moves and who doesn’t? Which species are going to be saved and which ones won’t be? What can we do about the situation, not just this fantasy of avoiding the situation like we seem to be living in now.”

A convergence of artistic awareness
Rush was invited to the town among members of the public to watch as Morway worked on the mural. Forty copies of Rush’s book were available for signing, donated by ReMain Nantucket, who this past spring sponsored the Envision Resilience Narragansett Bay Challenge — an exercise for college students to hypothesize solutions to infrastructural problems in various Rhode Island communities that will be wrought by the implications of climate change and rising sea levels, Warren included.

At the same time, the event served as a sort of unofficial launch for the new “Warren Art Walkway”, which will feature semi-permanent rotating art exhibits, initially focusing on sea level rise and showcasing art from Mt. Hope High School students and Warren artist Linda Megathlin.

“As an artist and member of the Warren Arts and Culture Commission, I am heartened by the power of art in all its forms to raise awareness and spur dialogue and, most especially, the Town’s willingness to create an exhibit like this that inspires new understanding of the challenges presented by rising seas,” Megathlin said.

“It’s really great to see how all these pieces came together,” added Town Manager Kate Michaud.

Rush said that she was appreciative of Warren’s consciousness of sea level rise, which is the driving force behind “Market to Metacom,” a comprehensive development strategy for its two main corridors, Market Street and Metacom Avenue, that includes a proposed strategy of redevelopment and wetlands reclamation achieved through strategic retreat over a number of decades.

“Warren’s average elevation is seven feet above sea level, with projections that the area could realize nine feet of sea level rise by the end of the century,” said Bob Rulli, Warren’s Director of Planning & Community Development. “We must be very vigilant about what those impacts could be to the Town and our residents. Conveying awareness about climate change and sea level rise through art is an alternative means of communication which we can utilize to raise awareness of the inevitable.”