A famous Warren football player's legacy is being carried on by his granddaughter, who has racked up college championships and accolades on her way to a possible pro career on the pitch. 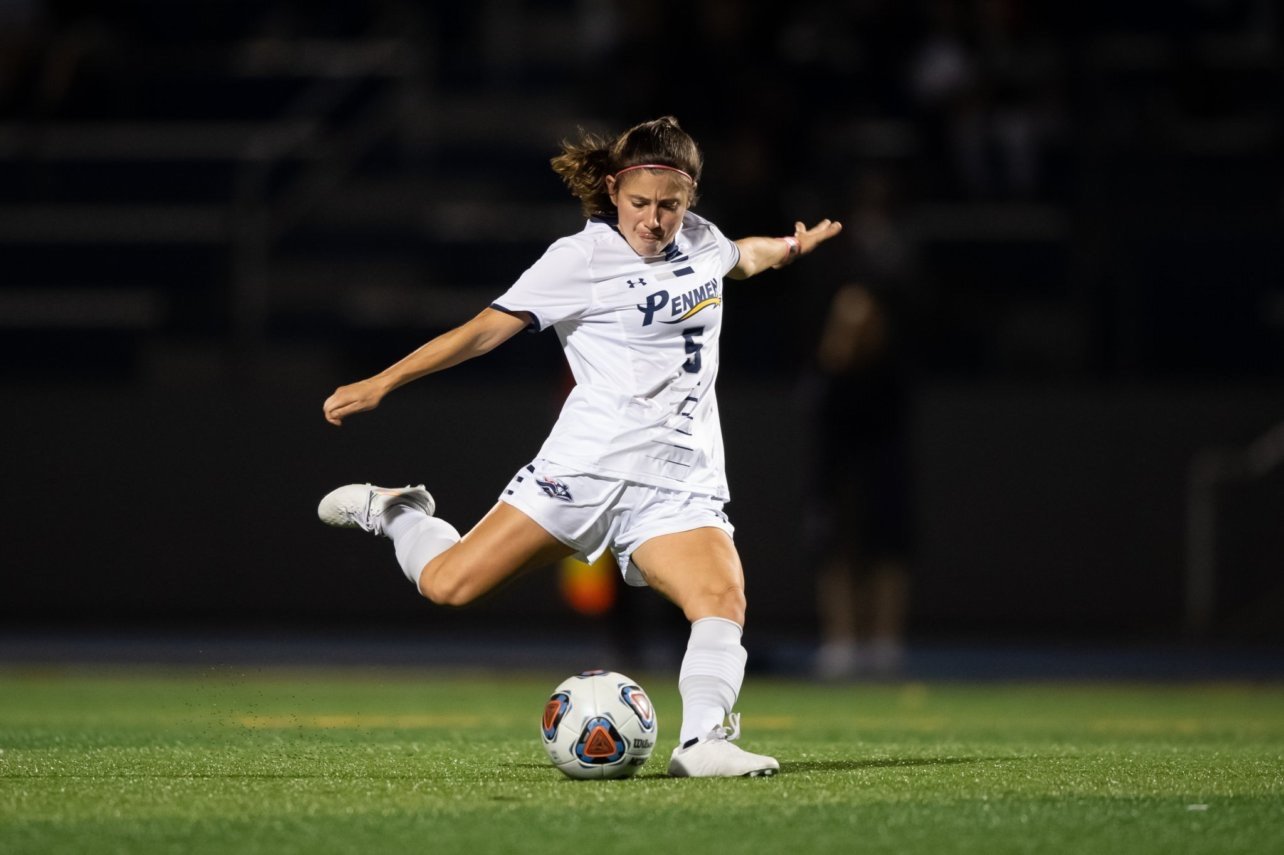 Allyson Abbruzzi Patterson launches a shot during a Southern New Hampshire University home game in 2021. She was named the D-II player of the year in 2021. 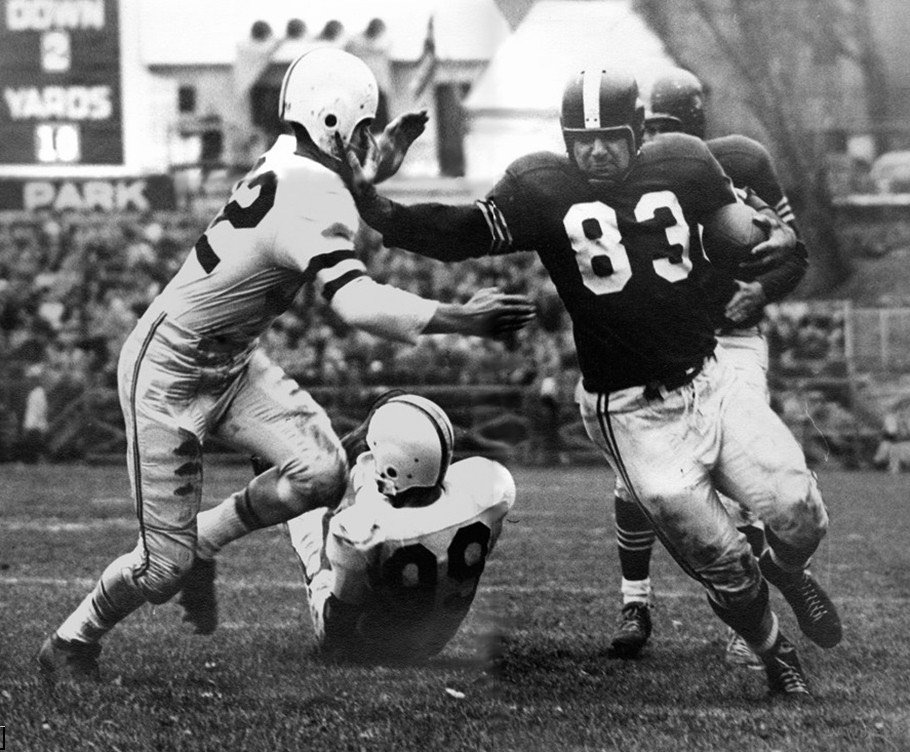 Pat Abbruzzi, Allyson’s maternal grandfather, was a Warren football legend and went on to play professionally for both the NFL and the Canadian Football League. He is pictured here in action during his stint with the Montral Alouettes in the 1950s. 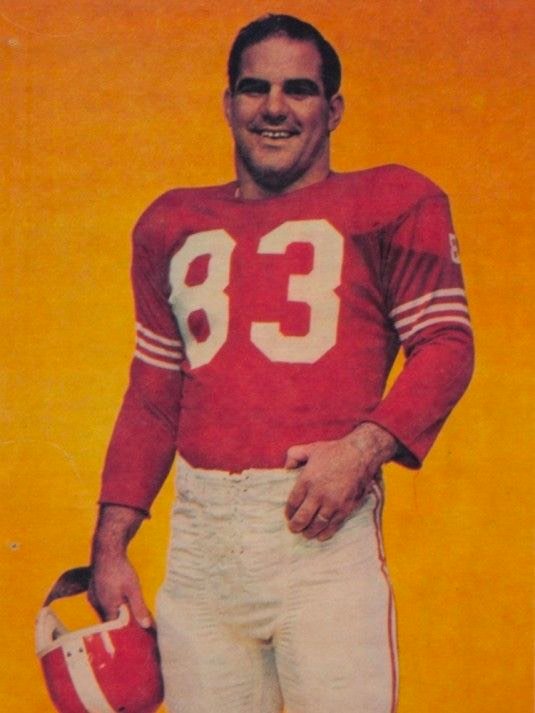 Pat Abbruzzi as photographed for the Montreal Star Magazine in 1958. 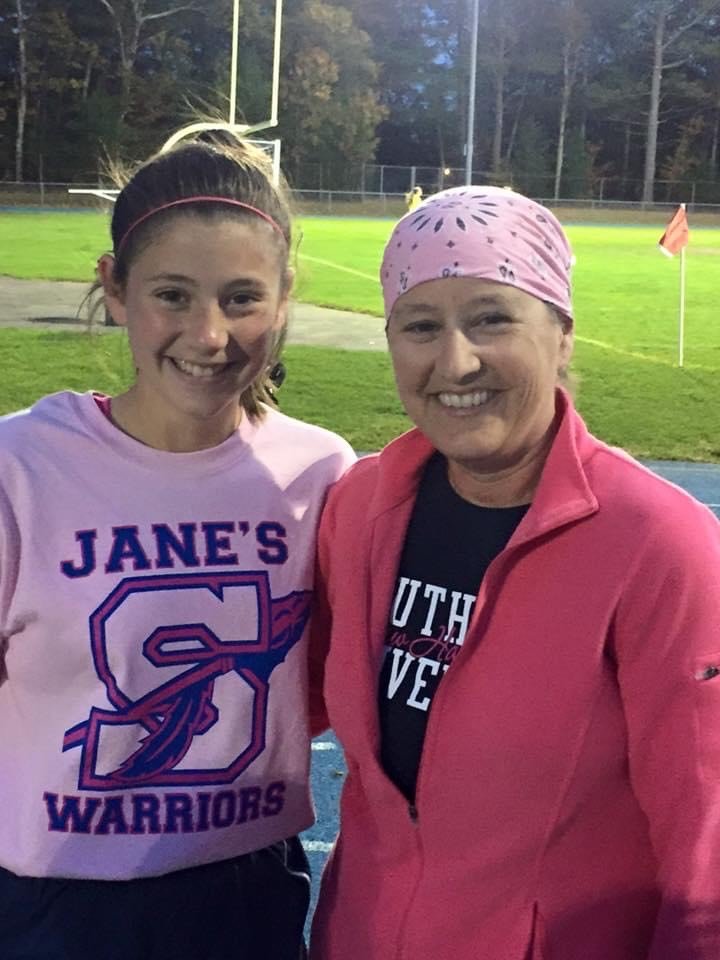 Allyson Abbruzzi Patterson with her mom, Jane, in 2015. Allyson called her mom an ongoing source of inspiration. She passed away in 2016.
Previous Next
Posted Thursday, December 16, 2021 1:10 pm
By Ethan Hartley

It’s natural for children to want to emulate the heroics of the adults in their lives, and since her mother was one of six kids and her father was one of twelve, Allyson Abbruzzi Patterson had plenty to choose from.

But it’s fair to say that her grandfather on her mother’s side stood out among the rest. Pat Abbruzzi amassed multiple records throughout his high school football days in Warren and went on to be an All-American standout at the University of Rhode Island. He would go on to play a brief stint in the NFL and played professionally in Canada.

For the naturally competitive Allyson, his influence helped ignite her athletic fire that has now bloomed into a potential professional soccer career.

“I kind of always wanted to be like him. I’ve loved sports ever since I was little and growing up in a sports-loving family helped,” she said. “I’ve always said, ‘I want to be like papa.’ Just to work hard and get the awards and recognition he got, I always thought that was cool. It wasn’t so much like feeling any pressure, I took it as excitement and I ran with that.”

A star at SNHU
She started her life on the pitch playing for Warren summer and indoor leagues when she was four. Through the inspirational coaching from her mother and the more hands-on, fundamental coaching from her father, Patterson honed her skills and wound up committing to Southern New Hampshire University (SNHU) on a scholarship the summer after her sophomore year at Seekonk High School.

Interestingly enough, one of her coaches from her early days playing indoor leagues in Warren, Ariel Teixiera, is now her assistant coach at SNHU. It was a serendipitous surprise that made Patterson all the more certain she had wound up in the right place at SNHU when she committed.

Patterson wasted no time making her mark at the D-II level. She helped the Penmen to a NE10 championship her first year on the team and was named to the conference’s All-Rookie team. The school also made the NCAA Division II tournament for what would be the first of four consecutive berths during her tenure on the team.

After COVID wiped out her senior season, Patterson considered jumping headfirst into a career teaching math. She ultimately opted to utilize her remaining year of eligibility to play as a graduate student while pursuing her Master’s in education. She started all 17 of this year’s matches, accruing 13 points (six goals, one assist). She led the conference with four game-winning goals, and was named to the Division II Conference Commissioners Association (D2CCA) East All-Region First Team for the second consecutive season.

To add a cherry on top, Patterson also learned that she had been named the NE10 Conference’s Player of the Year, the first time a SNHU player earned such an honor. Her teammate, Ai Inoue, won Defensive Player of the Year and their coach, Elie Monteiro, won Coach of the Year for the conference. Patterson said in her interview that the coaching staff at SNHU has been a source of amazing inspiration to her.

“What they showed me from the beginning and what my head coach Elie said to me was they’re all about family and they want to create that family atmosphere where there’s just that trust and respect off the bat,” she said. “Right when he said that, I bought into their program and never looked back. That’s what makes a good coach, they not only care about you as a soccer player, but as a person. And they showed that throughout my four years.”

The pros next?
Moving forward, Patterson said that her coaches are hard at work trying to secure her professional tryouts and putting out highlight videos to various professional clubs in Europe, including Finland, the Netherlands, England, and New Zealand. Whether or not the pro soccer career works out, eventually she sees herself going back to Seekonk High School as a math teacher — where teachers were a supporting pillar during the difficult period where her mother fell ill. She passed away in 2016.

Patterson said she was grateful to all of her coaches, from age four to her current 23, and particularly thankful for her parents, for helping her achieve a high level of success on the field and off.

“My mom was always my motivation and inspiration, especially after she passed away,” she said. “I do everything for her because she showed so much grit and fight when she was sick, so I kind of carry that with me as I keep working towards new goals whether it’s teaching or soccer. But also my dad for being the coach for me. He always pushed me to be better. My mom was the inspirational motivation but my dad really pushed me to be better and work hard for what I wanted in life.”