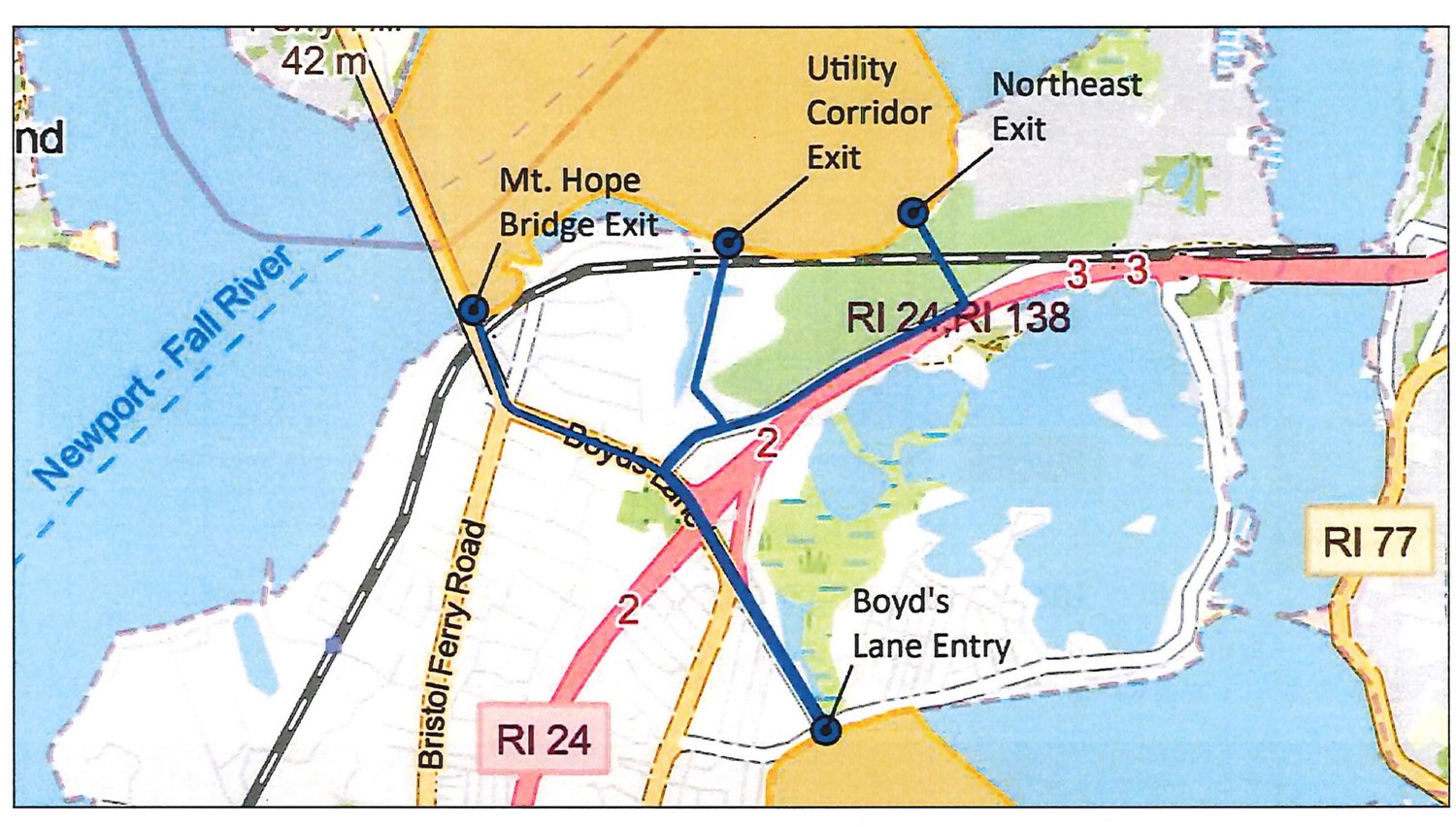 If they are wrong, the ramifications to Portsmouth could be severe.”
Joe Forgione, Portsmouth Economic Development Committee
By Jim McGaw

PORTSMOUTH — A major wind developer’s plan to lay a 20-mile-long stretch of mostly underwater cables that would also traverse protected land in Portsmouth is attracting increased scrutiny in advance of its upcoming hearing before the R.I. Energy Facility Siting Board (EFSB) on Aug. 18.

Mayflower Wind filed an application with the EFSB on May 31 to construction the transmission facilities to connect its offshore wind turbines located 30 miles south of Nantucket to the regional transmission system at Brayton Point in Somerset. According to Mayflower Wind, its SouthCoast project would power up to 800,000 homes.

However, to bring the energy to the shore, cables need to be run through the Sakonnet River, then over three miles of land in Portsmouth, and then continue north up Mt. Hope Bay to a connection point in Somerset, Mass.

Mayflower will appear before the EFSB on its application to “construct major energy facilities in Portsmouth” at 9:30 a.m. on Thursday, Aug. 18, in Hearing Room A of the Public Utilities Commission Office Building, 89 Jefferson Boulevard, Warwick.

The Portsmouth Town Council, meanwhile, plans to discuss the matter at its next meeting on Tuesday, Aug. 9, beginning at 7 p.m. Mayflower Wind has also scheduled a one-hour virtual forum on Tuesday, Aug. 16, which will include a walk-through of its proposed intermediate cable crossing in Portsmouth, as well as an overview of the Mayflower Wind SouthCoast project. You can register here, and submit questions in advance at info@mayflowerwind.com.

One group that has raised plenty of questions about the project is the Portsmouth Economic Development Committee (PEDC), which first heard a presentation by Mayflower Wind back in January.

PEDC member Joe Forgione has urged the Town Council to hire an independent outside engineering firm to report to the town on safer and less-disruptive alternatives before the process proceeds.

“And to get ahead of this we must not delay and do that now,” Forgione stated in a July 8 letter to council members. “Many of their hand wave positions that everything is safe, environmentally and wildlife friendly,  and there are no safer routing alternatives, have not been sufficiently substantiated. If they are wrong, the ramifications to Portsmouth could be severe.”

In a separate appeal to other residents and abutters like himself, Forgione said the developer should set up a multimillion-dollar indemnification fund before anything is approved. “If there is a sinkhole near your house or other damage to your property without this, you will have to sue and wait five to 10 years to work through the courts to get compensated up against their well-paid lawyers,” he explained.

• Two HVDC 20-mile submarine export cables generally collocated within a single export cable corridor that will run up the Sakonnet River, make intermediate landfall at Island Park Beach and Boyd’s Lane, traverse Portsmouth underground, and transition back to offshore in Mt. Hope Bay. (According to Mayflower, there are three potential routes for the land-based cable connection to traverse through Portsmouth, all of which go through some portion of the 56-acre Boyd’s Marsh, a state-managed salt marsh.)

• Two landfall work areas on Aquidneck Island for horizontal directional drilling activities, one on the northeast side of Portsmouth (top of Park Avenue or on Walnut Street), and one of the northwest side of town (Mayflower Wind is still considering multiple locations).

• A possible “noticed variation” that would facilitate the future delivery of additional power from Mayflower Wind’s offshore generation facility by “right-sizing” certain transmission facilities in Rhode Island (including trenching and conduits for onshore underground cables) as part of the current construction to minimize disturbances and environmental impacts.

The project area in Rhode Island consists of about 139 acres — more than 135 of which are offshore, undersea land and about 3.5 acres of onshore land. Mayflower Wind is not seeking EFSB approval for the construction of the offshore wind turbines or the facilities at Brayton Point, as they are located outside of the board’s jurisdiction.

Mayflower has stated it had looked into alternative cable routing that did not include a land crossing, but it ultimately was not viable.

“Due to the narrow width of the Sakonnet River channel north of Route 24, and the strong currents and high volume of boating traffic in this reach, a fully in-water route was deemed unfeasible,” a Mayflower report stated.

In an April letter to Mayflower, the PEDC responded to Mayflower’s claim that the most direct route route up the Sakonnet River to the east of Gould Island and under the Sakonnet River Bridge was not viable. “The depth of the Sakonnet River in that area is 50 feet or greater, which is much deeper than the proposed route. Could you please provide more information including studies and costs that support the route proposed — and that eliminated other possible routes?” the PEDC asked in its letter.

The PEDC also raised concerns over the cables’ impact on moorings, Island Park Beach, and wildlife and sea life, as well as questions regarding needed repairs or upgrades.