The owners of the former Zion Bible College property recently unveiled a new plan for the vacant college campus, one that calls for more apartments, more townhouses, and more duplexes, but less … 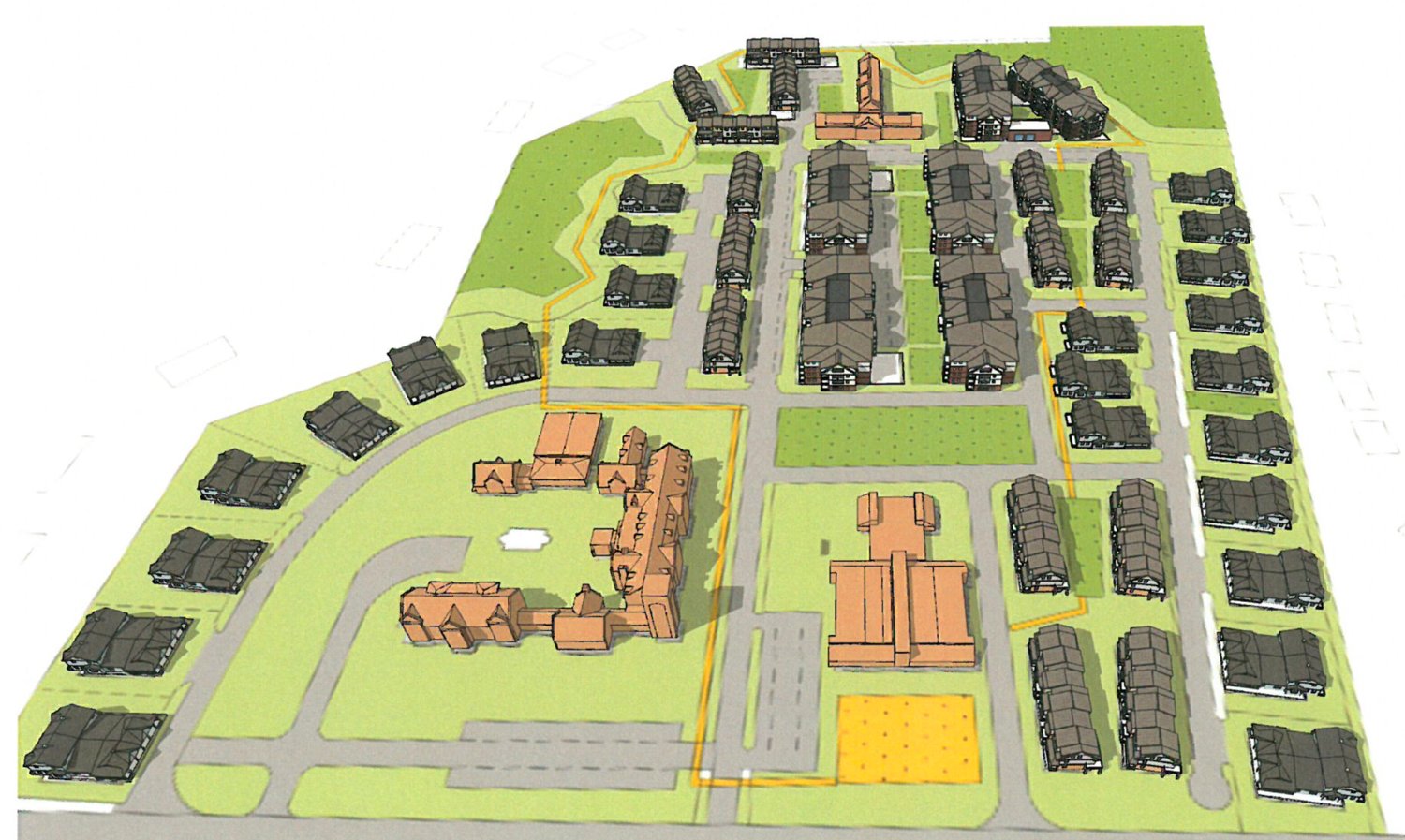 This rendering shows the proposed development of the former Zion Bible College property. The new plan calls for fewer senior housing units, but a significant increase in total dwelling units. 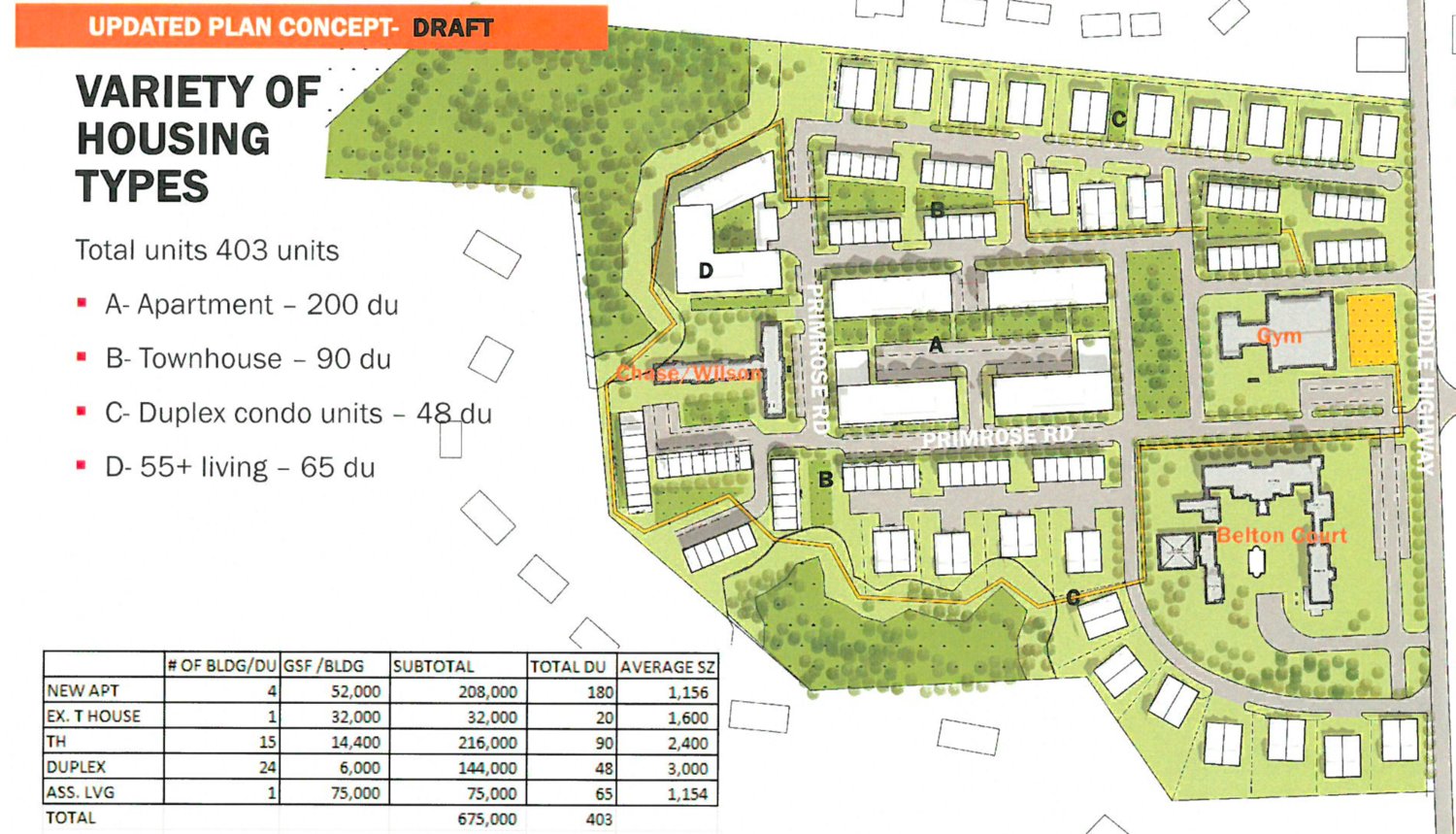 In total, the plan calls for 675,000 square feet of living space, not including the Belton Court mansion or the gymnasium. 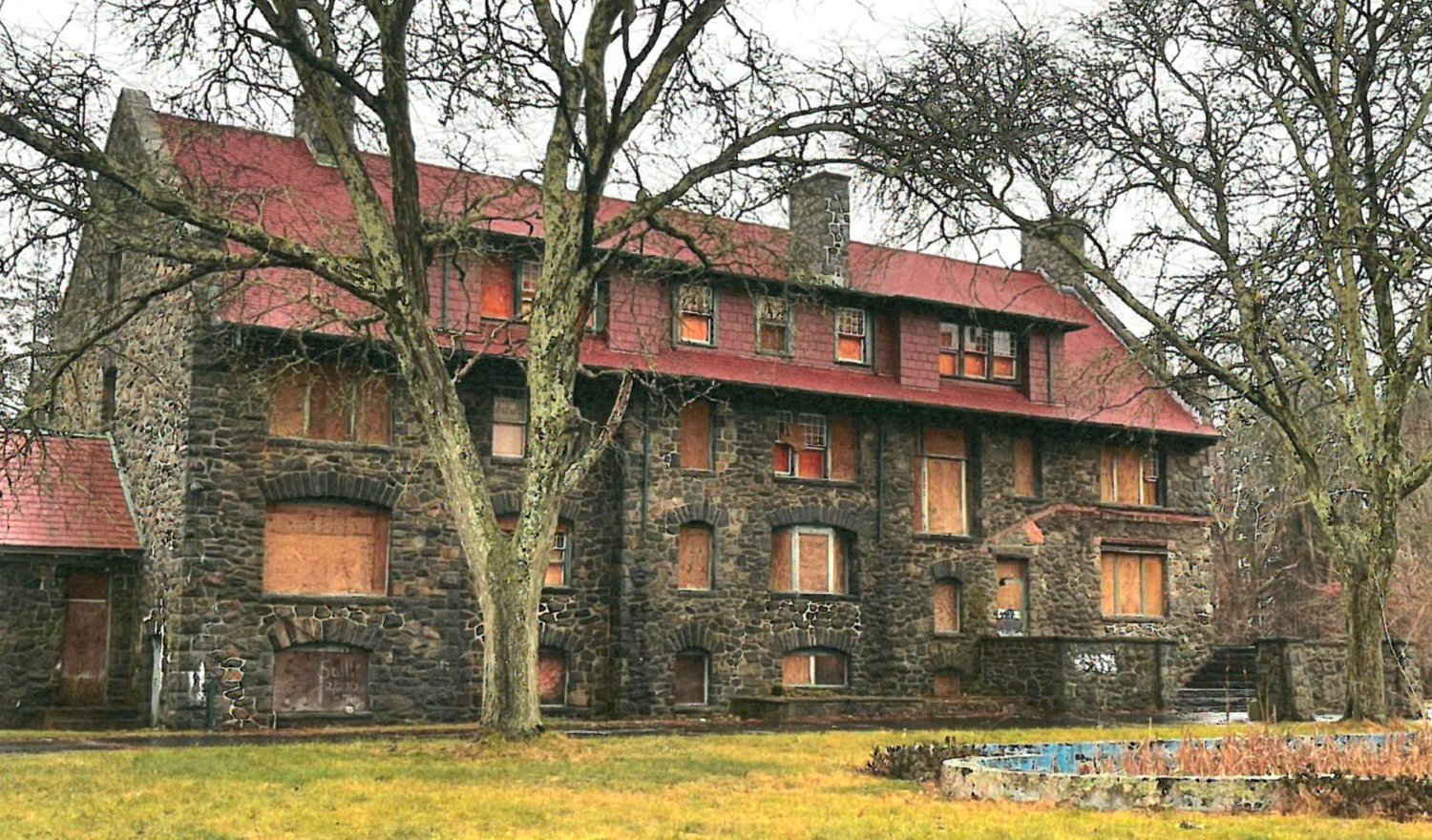 The architect for the project indicated that Belton Court would be converted into a hotel but the attorney for ShineHarmony said that was not part of the plan. 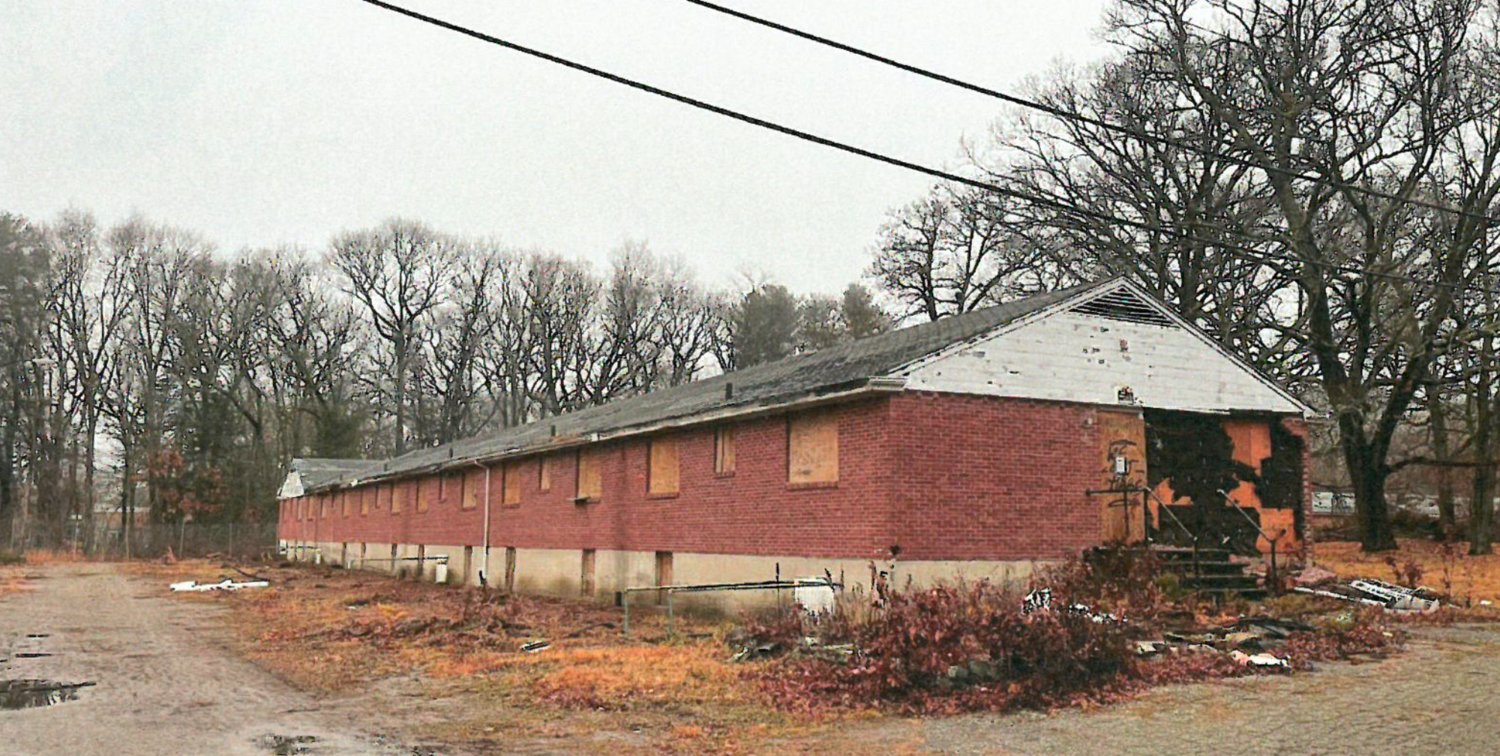 The dining hall/student union building has been demolished on the Zion property, and officials are awaiting a permit to raze Heroo Hall.
Previous Next
Posted Wednesday, January 12, 2022 8:55 am

The property obviously has great potential, but the latest proposal is not the way to go.”
Council member Carl Kustell

To me, it’s a significant change from an age-restricted development.”
Barrington Town Manager Phil Hervey
By Josh Bickford

The owners of the former Zion Bible College property recently unveiled a new plan for the vacant college campus, one that calls for more apartments, more townhouses, and more duplexes, but less housing for seniors.

The property owners, ShineHarmony LLC., presented the development proposal to the Barrington Planning Board as an update to their current master plan, which had been previously approved. But officials with the town — the solicitor and the planner — said the new plan would need to be re-submitted for its own master plan approval as it is significantly different from the previous plan.

So, how different are the plans?

The previous plan called for the construction of a continuing care retirement community on the Zion property. It included the development of about 250 residential units, all of which were intended to be age-restricted for people 55 and older. Town officials showed overwhelming support for the senior housing proposal — the town even created a tax stabilization deal with ShineHarmony, which would have allowed the developer to pay a lesser amount in taxes initially and then increasing amounts over the next 15 years. (ShineHarmony has since allowed the tax deal to expire.)

The new plan, meanwhile, calls for a much-reduced number of senior housing units. According to a presentation shared by the developer at the Jan. 4 planning board meeting, the new or “updated plan concept” calls for 403 total dwelling units on the 39.5-acre property.

The majority of those units would be apartments — 200 total — located in four, 4-story buildings constructed in the center of the property. The average size of each apartment would be 1,156 square feet.

The senior housing units would shrink in the new plan to 65. The unites would be located in buildings located toward the rear of the property abutting the wetlands.

In total, the plan calls for 675,000 square feet of living space, not including the Belton Court mansion or the gymnasium. The architect for the project, Kyle Xue of Massachusetts-based Up Design and Build, indicated that Belton Court would be converted into a hotel but the attorney for ShineHarmony, William Landry, said that was not part of the plan.

Other features included in the new plan were a neighborhood park open to all, a playground, and a splash pad.

Barrington Town Council member Carl Kustell, who serves as liaison to the planning board, said the plan’s impact on traffic, school capacity and the wetlands would be “quite significant” if implemented. Mr. Kustell also said he was concerned about the apparent shift of the plan, away from senior housing.

“I understand that there will be some give and take with any private developer, but Shineharmony’s shift away from senior housing undercuts a widely shared community objective,” he said. “Last summer and fall, the development team they hired after years of neglect made real progress on demolition work. They also dramatically increased security and were reviewing some early architectural concepts. For some reason, ownership fired that team and now an unproven new team is proposing to move away from the primary development concept.”

Mr. Kustell said he believes the new plan would not be a good fit for Barrington.

“It would produce serious traffic problems in the neighborhood, put stress on school capacity and damage wetlands. Beyond that, it fails to significantly increase the town’s senior housing stock, a major community objective,” he said. “The property obviously has great potential, but the latest proposal is not the way to go.”

Phil Hervey, Barrington’s new town manager and former planner, said the concept shared by the property owner at the recent planning board meeting was “totally different” than the previously-approved master plan.

“To me, it’s a significant change from an age-restricted development.”

Mr. Hervey said the prior plan was itself a fairly dense project, although it called for some cottage units and the repurposing of Belton Court in an assisted living complex. The new plan calls for even denser housing.

Mr. Hervey and members of the planning board offered other concerns during the recent meeting, including the potential impact on local schools. The previous plan offered little impact on the public schools as it was designed for older residents who were not likely to have school-age children. There is no age restriction for the majority of housing in the new plan, opening the door for a significant increase in the Barrington student population.

Some town officials said Barrington might need to build an additional school to accommodate the influx of new students.

The developer stated that 20 to 25 percent of the housing would be marketed as affordable; a member of the planning board asked if they would consider a higher percentage of it being deemed affordable, but the developer did not appear to agree with that idea.

Some property abutters also weighed in on the proposal. One resident had concerns about water infiltration at the proposed development, adding that it appeared some of the buildings were lacking downspouts or had downspouts that directed water back into the buildings.

While there was no vote taken at the planning board meeting, officials agreed that the property owners will need to present a new master plan application for this proposal, “because this does not work as an update to the existing master plan.”

Charles Deng, an advisor to the property owner, responded to an email from the Barrington Times regarding the new plan.

He wrote: “The plan proposed on Jan 4th was conceptual and still at a very early stage. We will work on refining the plan based on the town's critiques/feedback and evaluating various proposals at hand…”

Mr. Deng also said the property owner is collaborating with a well-established real estate advisory team to “assess the most feasible way to advance its development.”

As part of the “conditions of approval” for the prior master plan, the property owner was required to show progress in certain areas. The presentation shared at the planning board meeting offered an update on those conditions and whether they are being met:

• Maintain 24-hour security at the site: The owner has contracted with a security firm which is on-site 24 hours a day, seven days a week; also, 30 motion sensor alarms were installed across the property.

• Demolition: The dining hall/student union building has been demolished, and officials are awaiting a permit to raze Heroo Hall. The presentation stated that there is an ongoing feasibility study to determine whether Chase/Wilson Hall and the gym can be preserved. Chase/Wilson Hall may be used as residential units, according to the new plan, and the gym may be repurposed as a sports club or community center.