The large wooden doors toward the rear of the Nayatt School cafeteria look like storage closets, but a closer look reveals something else.

As school officials pull open the doors, the spaces … 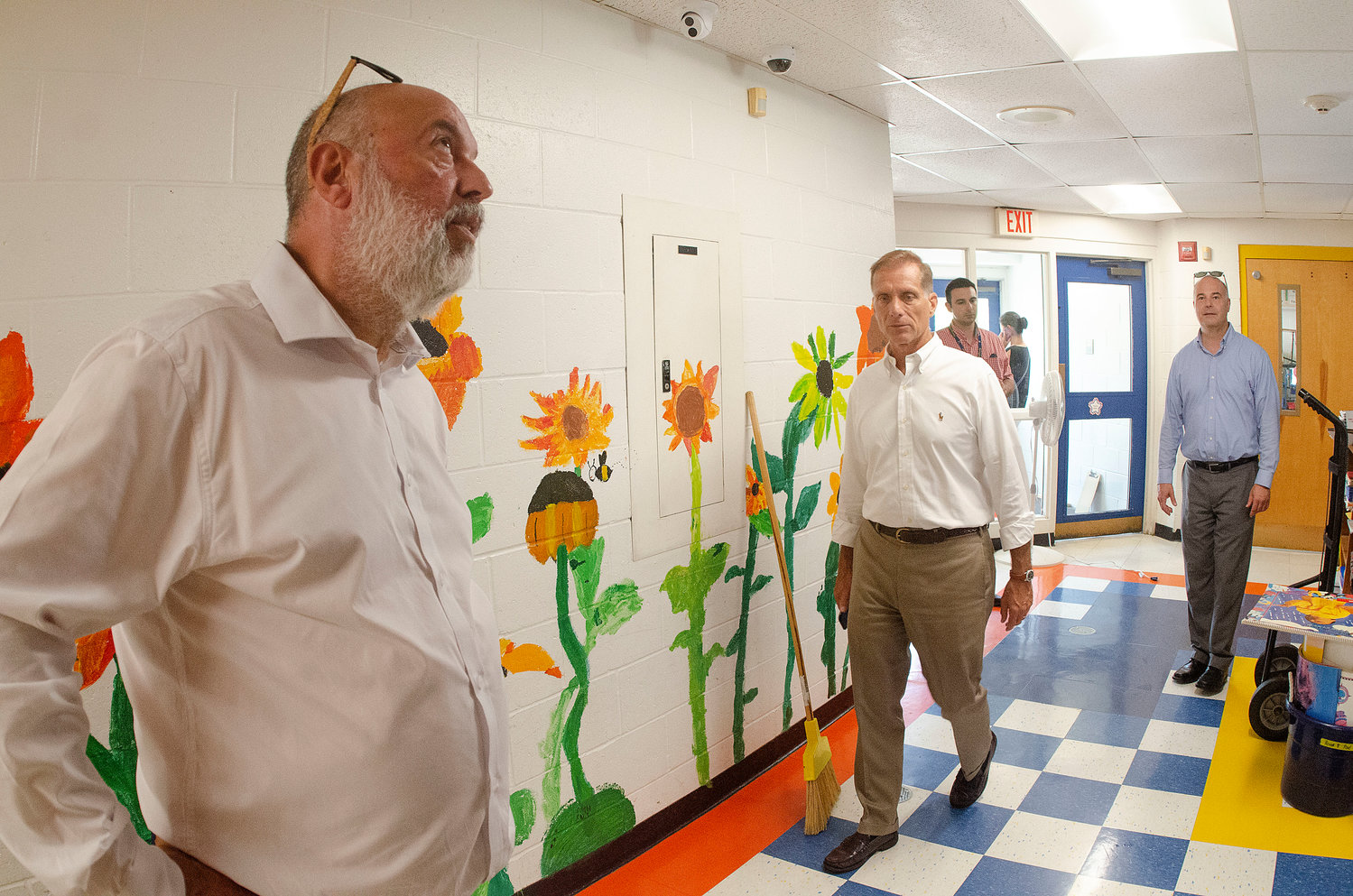 Joseph DaSilva, the coordinator for the state’s school building authority, (left) takes a look at the ceiling tiles at Sowams School during a tour of the local elementary schools. Barrington Superintendent of Schools Michael Messore (middle) and other school officials stand nearby.
Photo by Richard W. Dionne Jr. 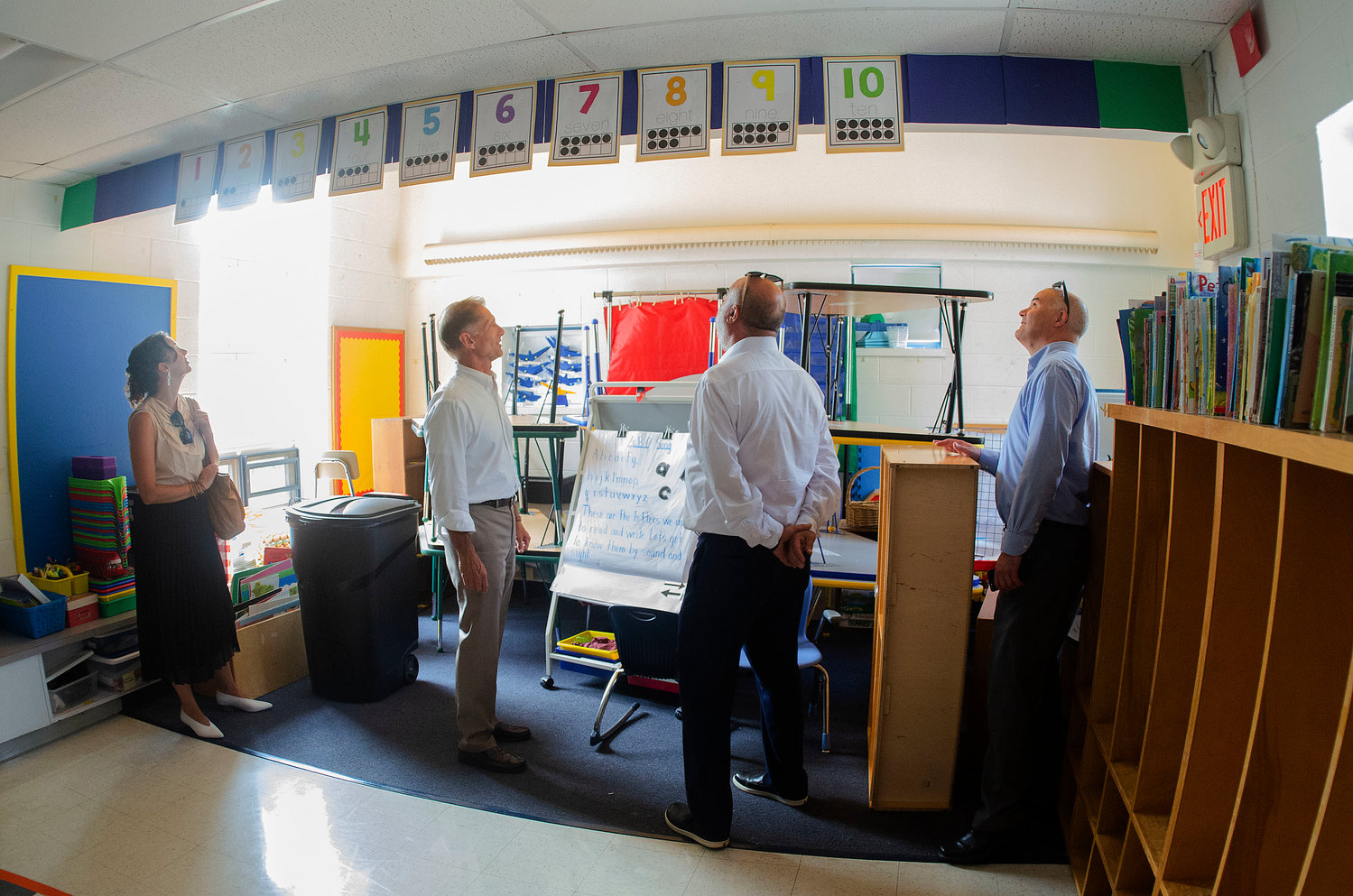 Matt Glum, the director of facilities for Barrington schools, stands near one of the storage closets that have been converted into teachers’ offices at Nayatt.
Photo by Richard W. Dionne Jr. 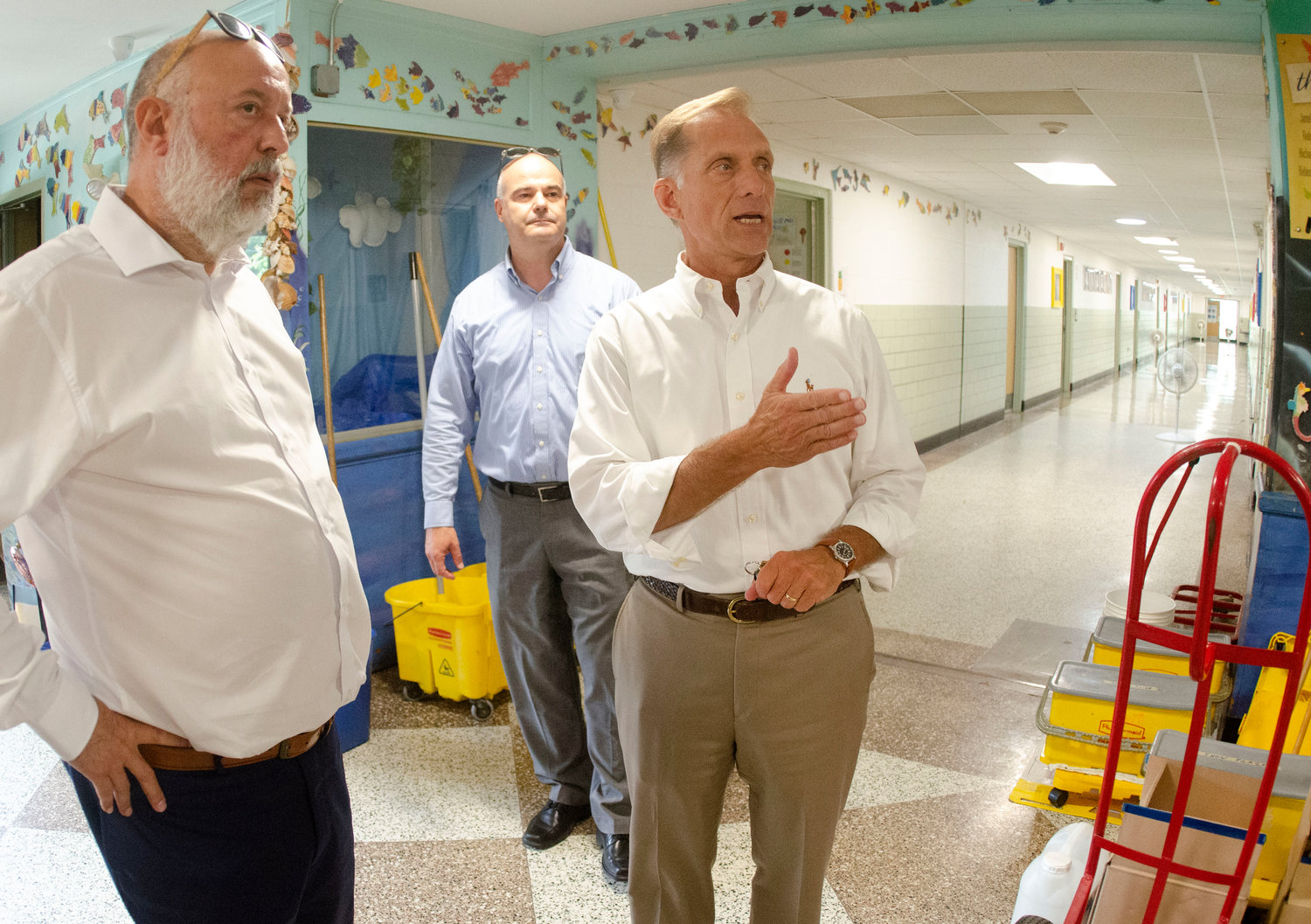 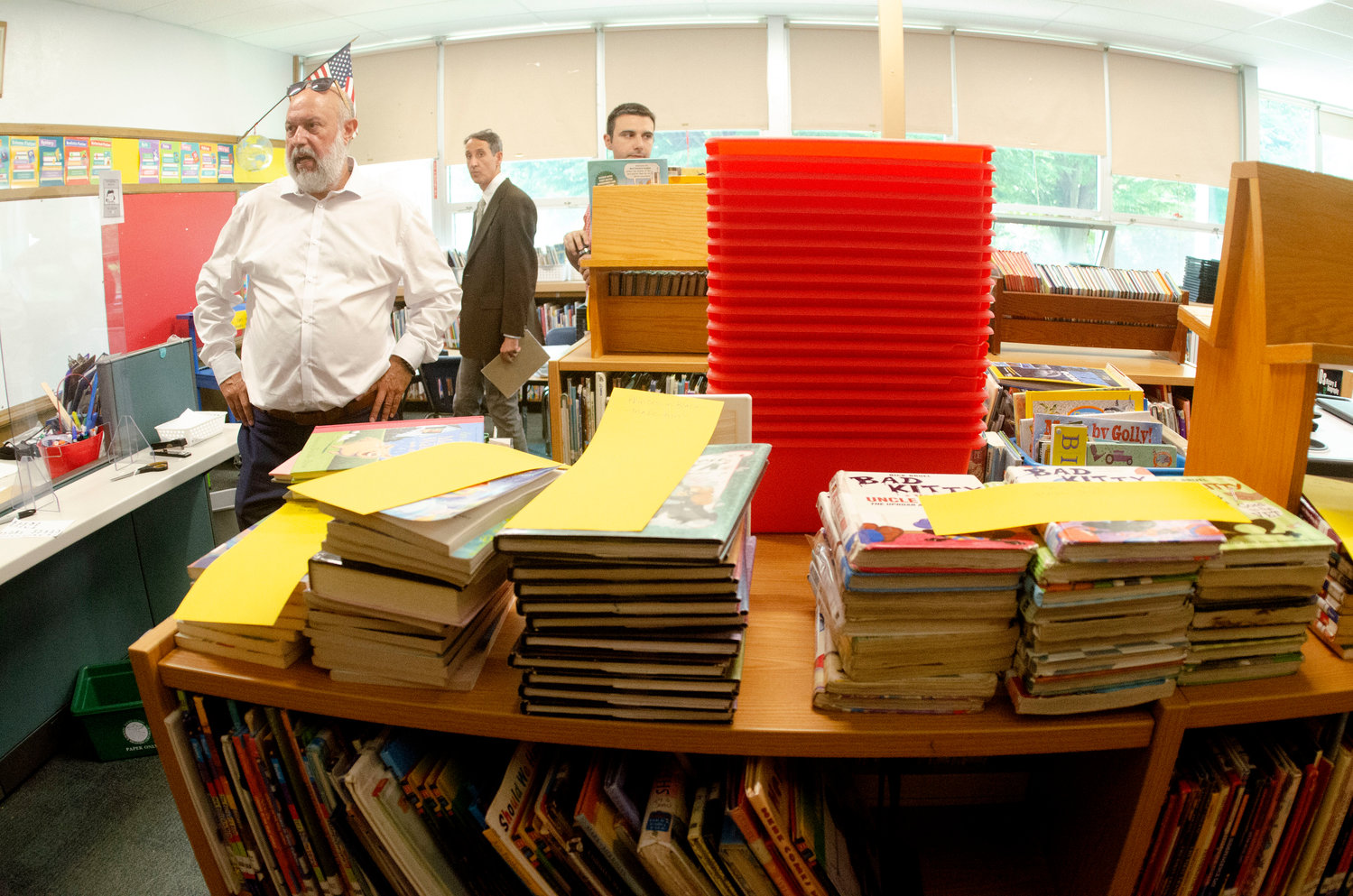 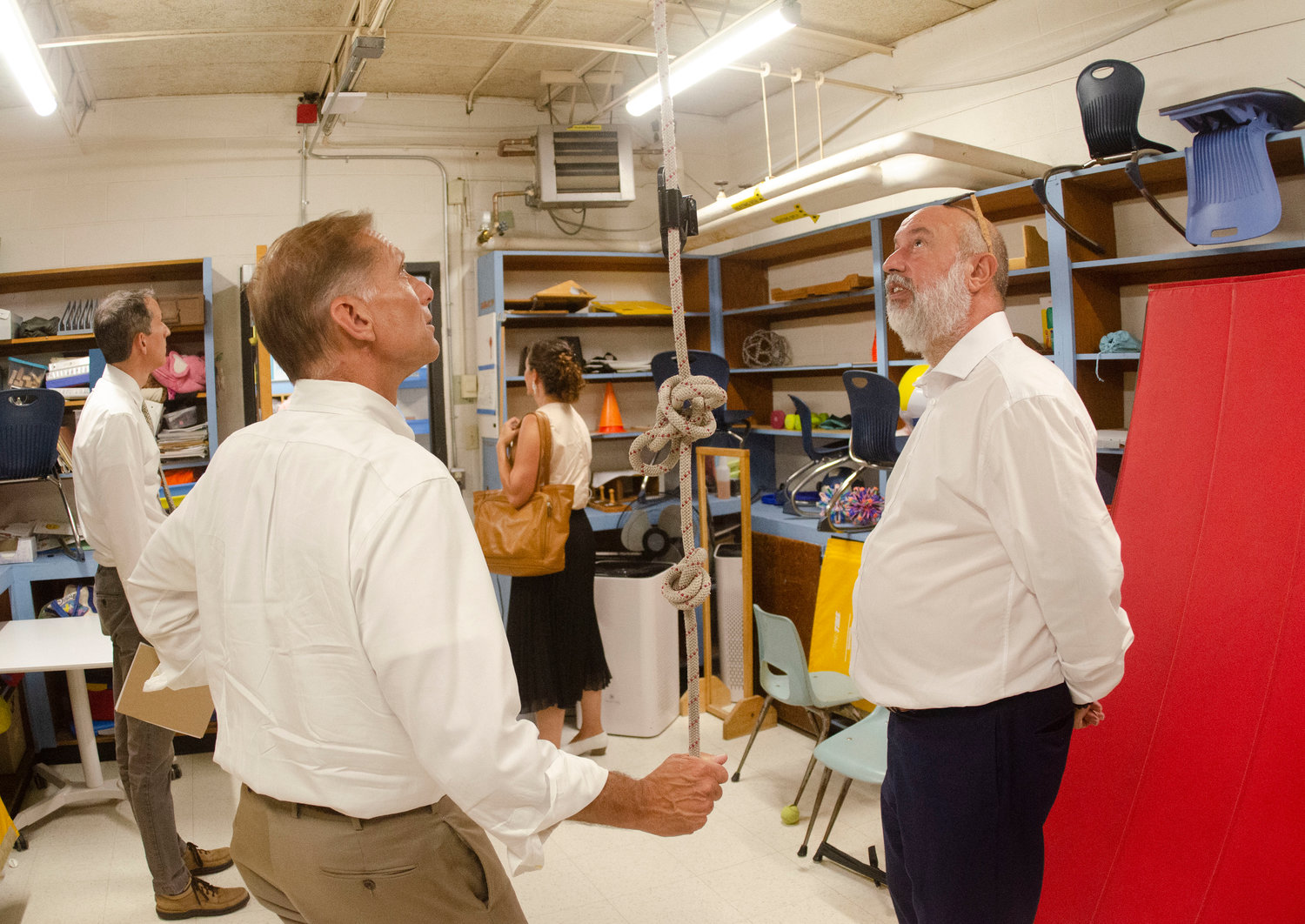 Barrington Superintendent of Schools Michael Messore (left) and Joseph DaSilva, the coordinator for the state’s school building authority, check out one of the spaces at Sowams School.
Photo by Richard W. Dionne Jr. 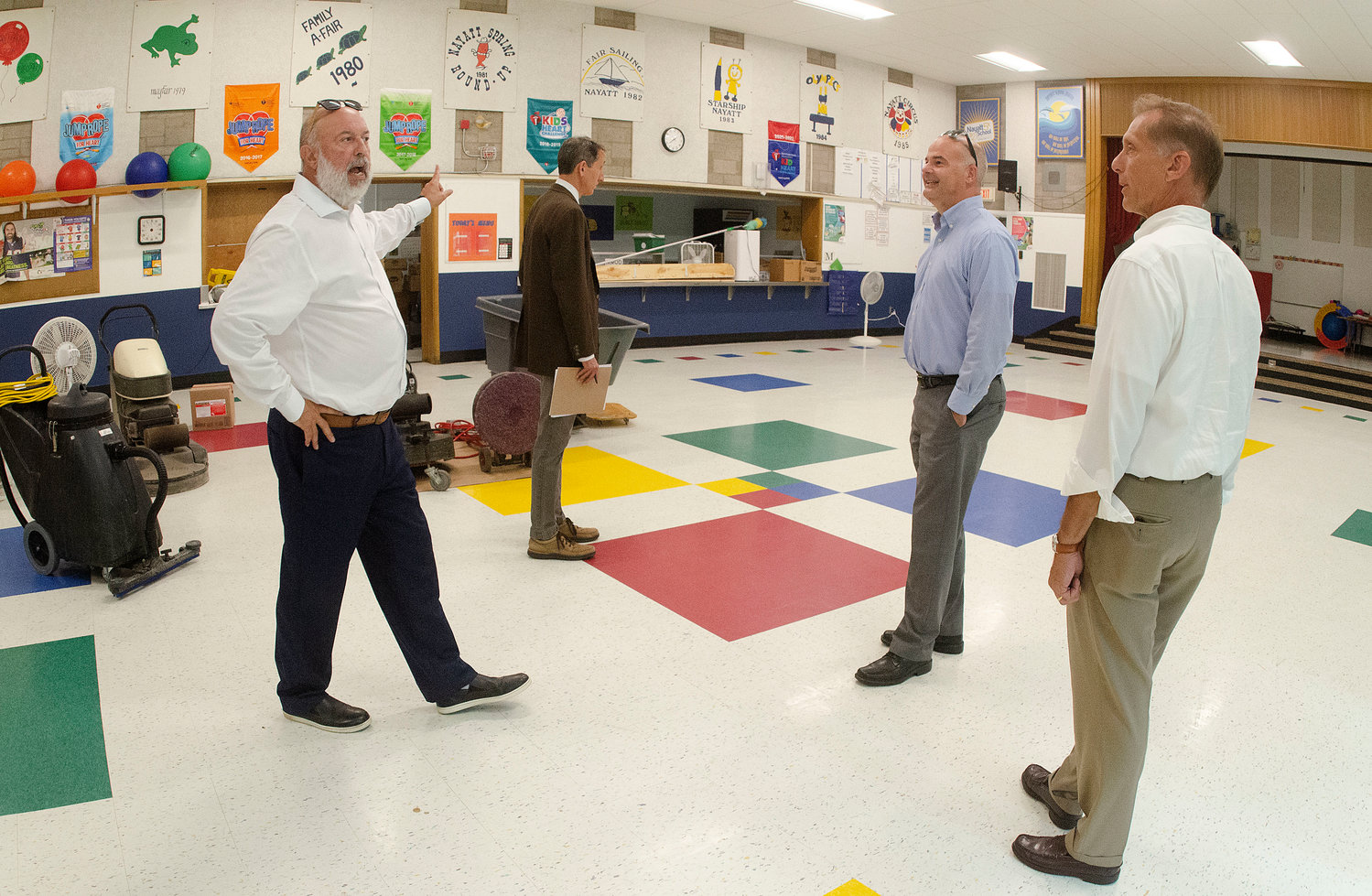 The large wooden doors toward the rear of the Nayatt School cafeteria look like storage closets, but a closer look reveals something else.

As school officials pull open the doors, the spaces reveal small desks and chairs, shelves, posters tacked to the walls. Barrington Superintendent of Schools Michael Messore tells the visiting contingent from the Rhode Island Department of Education that the former storage closets have been repurposed into windowless offices for education specialists at Nayatt.

On Thursday afternoon, July 28, Messore led a tour of the district’s elementary schools to state education officials. The tour was part of the district’s masters facilities plan, and was followed by the school building committee meeting where officials voted on “Option 2B,” which calls for the construction of Grade 1 through 5 schools at the Primrose Hill and Hampden Meadows school sites, and the conversion of Nayatt School into a pre-K and kindergarten early learning center. The plan eliminates the need for Sowams School (see associated article).

The tour started at Nayatt School — officials walked through a classroom first and then visited the school cafeteria. Messore pointed toward a space inside the lunch prep area. He said the space had been repurposed to accommodate another need at Nayatt.

Joseph DaSilva, the coordinator for the state’s school building authority, remarked on the multi-purposing approach employed by school officials.

“So this is a ‘cafe-gym-atorium,’” DaSilva said.

Messore said the creative use of space makes for some scheduling challenges, especially during the middle of the day when students need the space for lunch.

DaSilva, along with RIDE Education Facilities Planner Keelia Kentor and RIDE finance official William Trimble, checked out a separate classroom at Nayatt after the stop in the cafeteria. DaSilva commented on the newly-waxed floors, and then asked about student drop-off and pick-up challenges. DaSilva also asked which grades were serviced at Nayatt. The answer: kindergarten through 3.

DaSilva remarked: “That would be a huge improvement, to eliminate one transition.”

There was also a brief discussion about the ventilation system at Nayatt School. Matt Glum, the director of facilities at Barrington Schools, said the heating and ventilation systems are the same as when the building first opened decades earlier. The most recent change was to include a mobile air purification unit to each room; those units were afforded through state funding, officials said. They also spoke about how Nayatt and the other elementary schools in Barrington were not outfitted with a fire sprinkler system.

The final stop of the Nayatt Tour was inside the school’s library. The space is a converted classroom and filled with bookshelves. DaSilva comments on its small size, questioning whether it can accommodate project-based learning or even story-telling.

After finishing the tour at Nayatt, officials stopped by Sowams School, then Hampden Meadows and finally Primrose Hill.