There are some changes coming to the intersection of Lincoln Avenue and Middle Highway in Barrington.

According to town officials, the state is moving closer to bidding out a construction project … 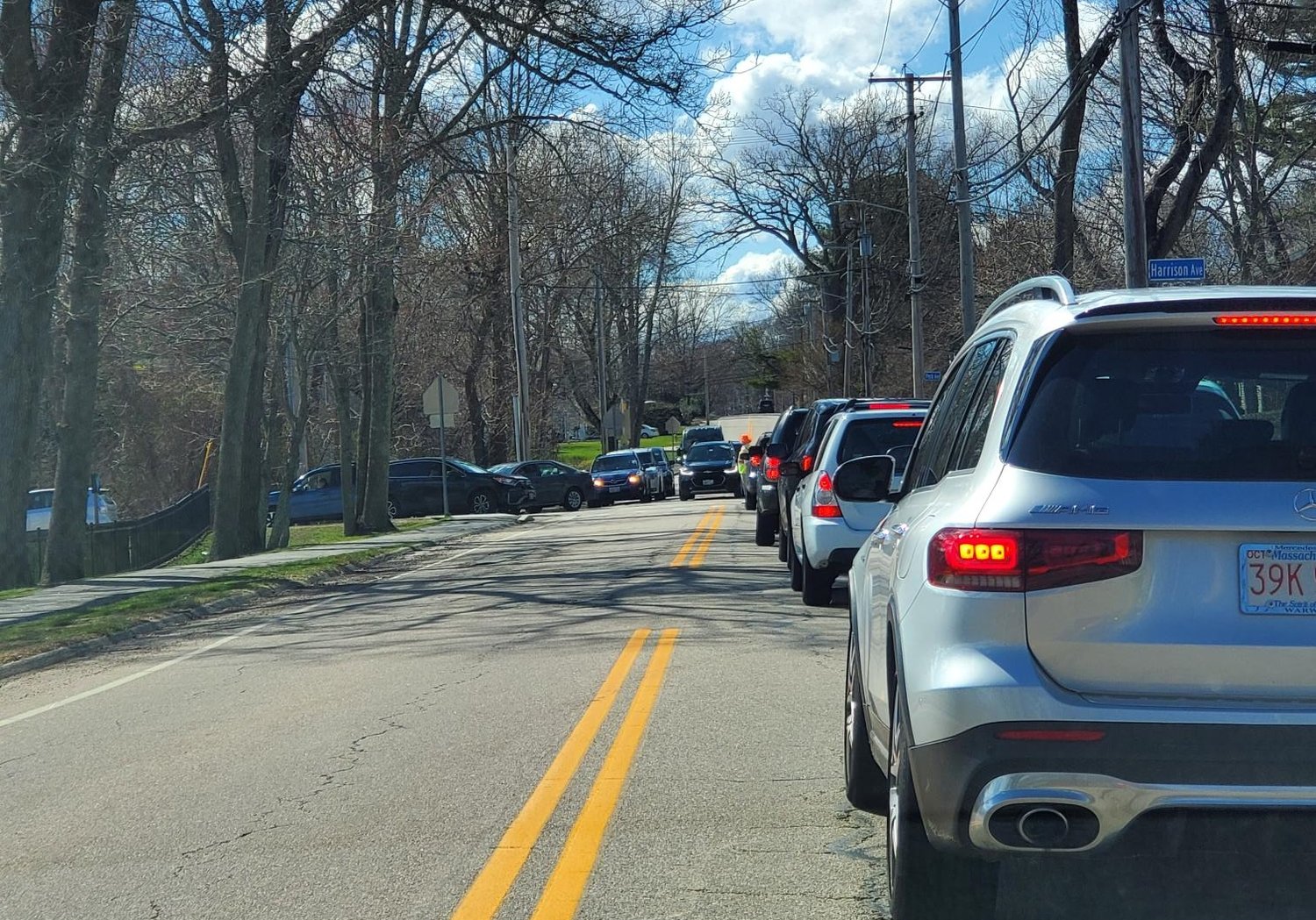 A Barrington resident snapped this photo while stuck in traffic outside of Barrington Middle School during school dismissal earlier this year. This is just west of the intersection of Middle Highway and Lincoln Avenue, where the town and state are talking about improvements.
Posted Friday, August 12, 2022 7:00 am
By Josh Bickford

There are some changes coming to the intersection of Lincoln Avenue and Middle Highway in Barrington.

According to town officials, the state is moving closer to bidding out a construction project that will bring a turning lane to the intersection. The turning lane will be added to the east-bound traffic on Lincoln Avenue, as it approaches Middle Highway.

Barrington Town Manager Phil Hervey said the town met recently with officials from the Rhode Island Department of Transportation to discuss the work. He said the town is emphasizing the importance of building new sidewalks in that area as part of the project.

“That’s one of the worst sections of sidewalks, and it’s unfortunate because you see so many kids and members of the community using it,” Hervey said.

The turning lane is aimed at improving traffic congestion in that area. During the school year, and specifically during the student drop-off and pick-up times, the intersection of Middle Highway and Lincoln Avenue can grow very busy. Cars back up in different directions; one of the biggest back-ups is along Lincoln Avenue heading east toward the traffic light.

“I drive through there every day on the way to work,” Hervey said during a recent interview. “You have to plan ahead … it gets pretty bad through there.”

Hervey said the project will be funded entirely by the RIDOT. Plans for the work show the widening of the intersection to the south to accommodate the turning lane. That work, coupled with the construction of drainage swales, will require the removal of some trees along the edge of the middle school property. The plan shows five trees being removed. Hervey said town officials are proposing the DOT plant two new trees in that area for every tree removed.

“We have been talking to them about the trees,” Hervey said.

Charles St. Martin, spokesman for the Rhode Island DOT, said the road work is part of a larger, statewide project.

“Work at this intersection is part of a $4.4 million, 2023 construction project that will upgrade four intersections; this one, two in Warwick and one in Narragansett,” St. Martin wrote in an email to the Barrington Times. “I do not have a cost breakout for just the Barrington intersection, and the cost is just an estimate as we are in the process of soliciting bids for a contractor. We expect to award the contract in the fall and start work on the project in the spring.”

St. Martin said that once the contractor is on board and has submitted a work schedule, the DOT will be able to provide more specific information to the public.

St. Martin said it is not yet clear whether sidewalk improvements will be included as part of the intersection project.

Braxton Howard Medlin, the chairman of the town’s DEI Committee, spoke briefly during the discussion about the upcoming construction project. Medlin, who is running for Barrington Town Council, said he noticed the written agreement between the state and the town included an outdated name: “State of Rhode Island and Providence Plantations.”

Hervey said he too noticed the term “Providence Plantations” and planned to contact the state and make sure that it is removed from the agreement.