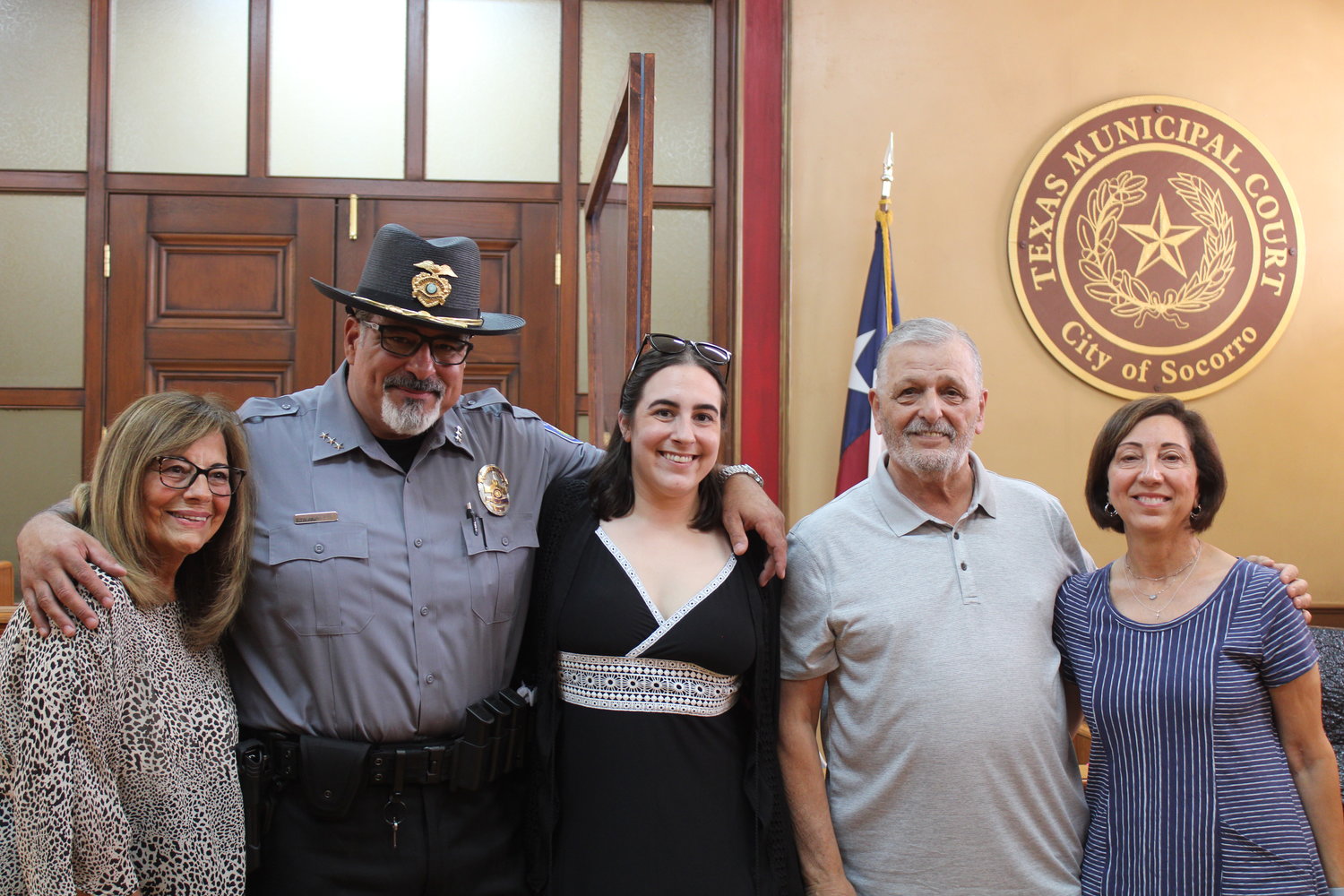 Barrington native Jason Stanzione (second from left) stands for a photo with his family. Stanzione was recently installed as the Deputy Police Chief of Socorro, Texas.
Posted Friday, August 12, 2022 12:00 pm
By Manny Correira

Socorro is a city in El Paso County, Texas. It is located on the north bank of the Rio Grande River southeast of El Paso, and on the border of Mexico.  The city population is approximately 37,000 people and is El Paso County's second-largest municipality.

The rank structure consists of a Chief, Deputy Chief, 2 Lieutenants, 5 sergeants, 3 corporals, and 41 officers. The deputy chief is responsible for the day-to-day operational running of the department and specialty teams.

For Jason, attaining the rank of Deputy Chief was something he'll never forget.

"If you want to shine like the sun, first you have to burn like it," is a passage he quoted.

The Barrington native later became a Federal Reserve police officer in San Antonio, Texas, and earned the rank of sergeant. Additionally, he worked at the Seguin Police Department, Texas, and was on the SWAT team, Bexar County Sheriff’s Department, Texas, assigned to the DWI/Drug task force and was an adjunct instructor at the Alamo Area Council of the government police academy (teaching basic and in-service training to Texas police officers 2003-2010).

In 2010, he began contracting and took a job in Iraq as a police advisor. In 2011, he operated and owned Valkyrie maritime services providing maritime security contracts (anti-piracy) for merchant vessels off the coast of Somalia and throughout the horn of Africa. In 2012, he was sent on contract to Afghanistan for the US Department of Defense as a police and security advisor in Herat, Kabul, and Kandahar regions, advising Afghan forces on convoy security operations and police functions. In 2013, he was in South Sudan Africa as a United Nations international police advisor supervisor in Wau province leading a team of 50 international police advisors.

"After four years of international contracting, I accepted a position as a lieutenant at the El Paso, Texas Federal reserve police department," he explained.

In 2017, Stanzione graduated from the Federal Bureau of Investigations National Academy (FBINA) for senior leadership session #267. This is a rigorous 10-week course for elite police officers hand-selected globally and invited to attend (only the top 1 percent of officers ever attend and graduate).

Said his father, "Needless to say, I am very proud of Jason's accomplishments, his dedication to achieve his goals, and his belief in himself. He has consistently shown that hard work, confidence in oneself, and the ability to not let any setbacks or perceived roadblocks keep him from pursuing what he seeks to do. Knowing the boy he was, and the man he has become, through his experiences to date, gives me assurance that he will continue to strive to do even more in the future."

Jason's mom, Gail Diodati, was equally impressed by what her son has been able to achieve.

"What can I say," she said, "I am bursting with pride on all his accomplishments. I am not only proud of him; he makes me proud to be his mom."

In a phone call to Stanzione this past weekend, he admitted that attaining the rank of Deputy Chief was a dream come true.

"That was one of my goals," he said. "I'm blessed. A little bit of hard work and perseverance really paid off. I still can't believe it. This was such a great opportunity for me."

Stanzione said he truly understands that having supportive parents went a long way in his career development.

"I had great role models in my mom and dad," he said. "And, today, I'm thankful for the opportunity to assist."

Jason's younger brother, Jared, is a member of the Providence Police Department.