The Westport basketball team doesn’t look tall, big, nor menacing during warm ups, but once the game starts, opponents find out the hard way that the fierce Wildcats can play. That scenario … 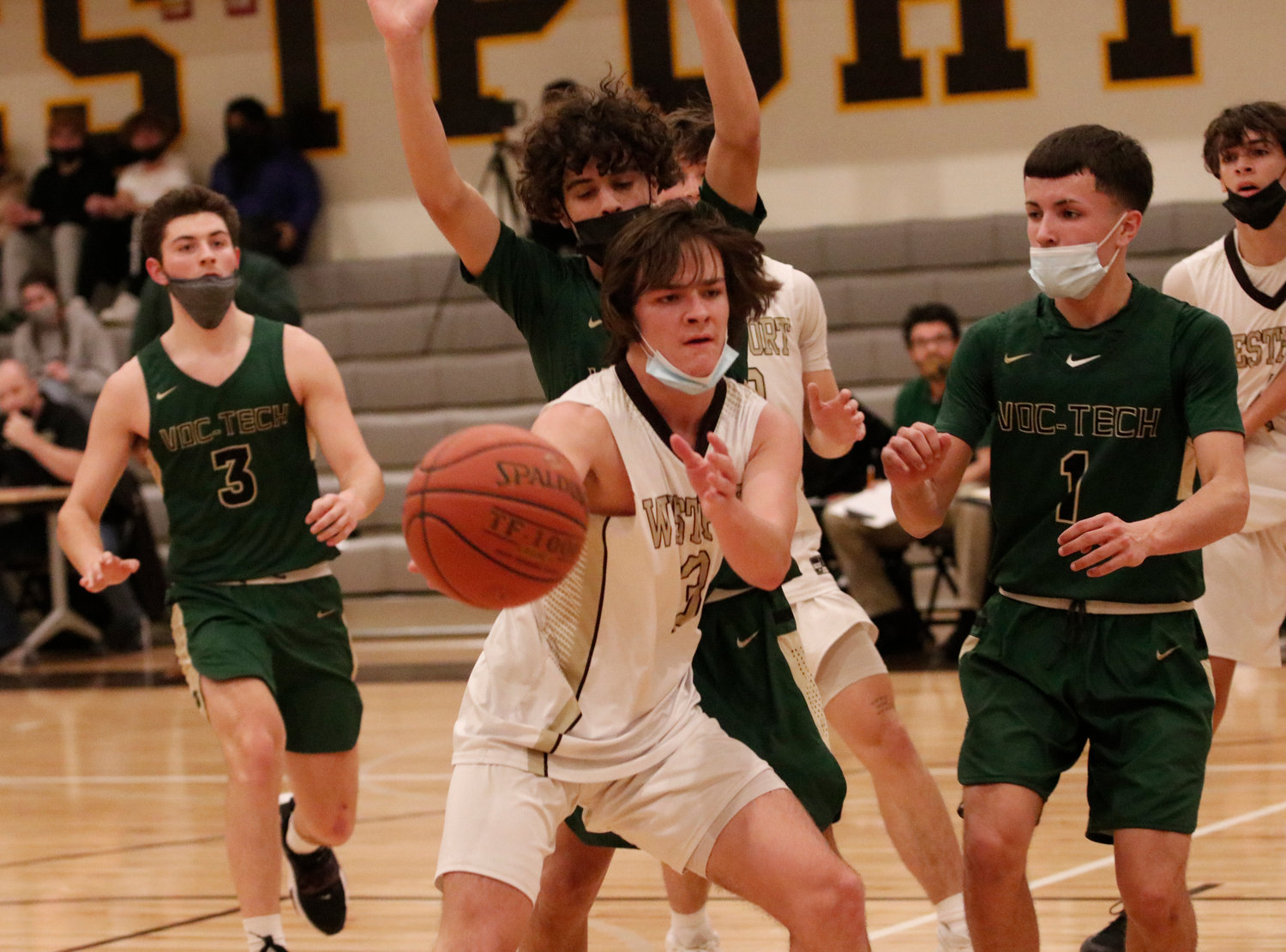 Cam Leary makes a pass as the Wildcats get into their offense during a non-league home game against Great New Bedford on Wednesday. Leary, Jayden Zuber and Ben Poitras came off the bench and combined for 18 points for the Wildcats in a 62-53 victory. 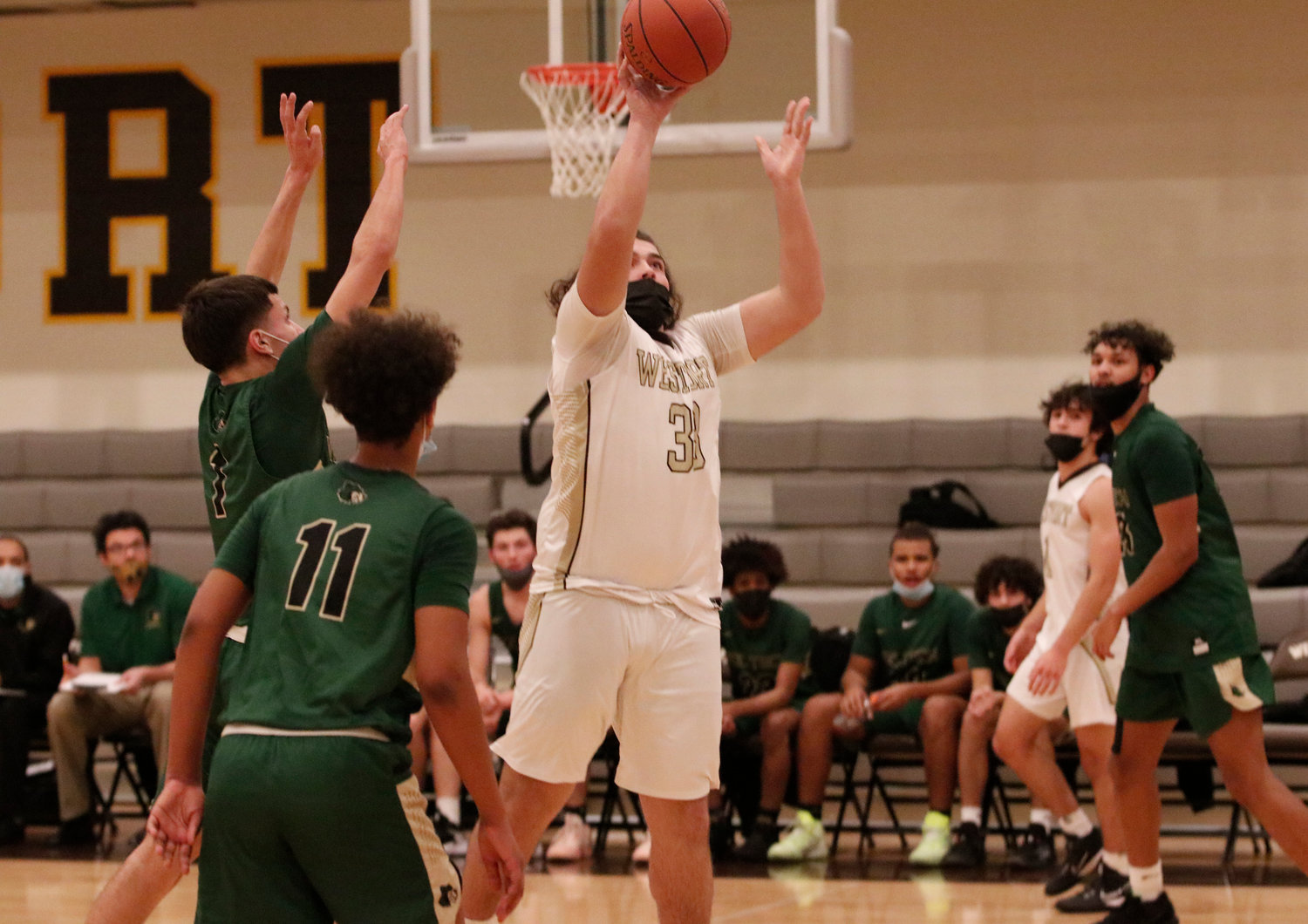 Jayden Zuber shoots a jumper from the paint. 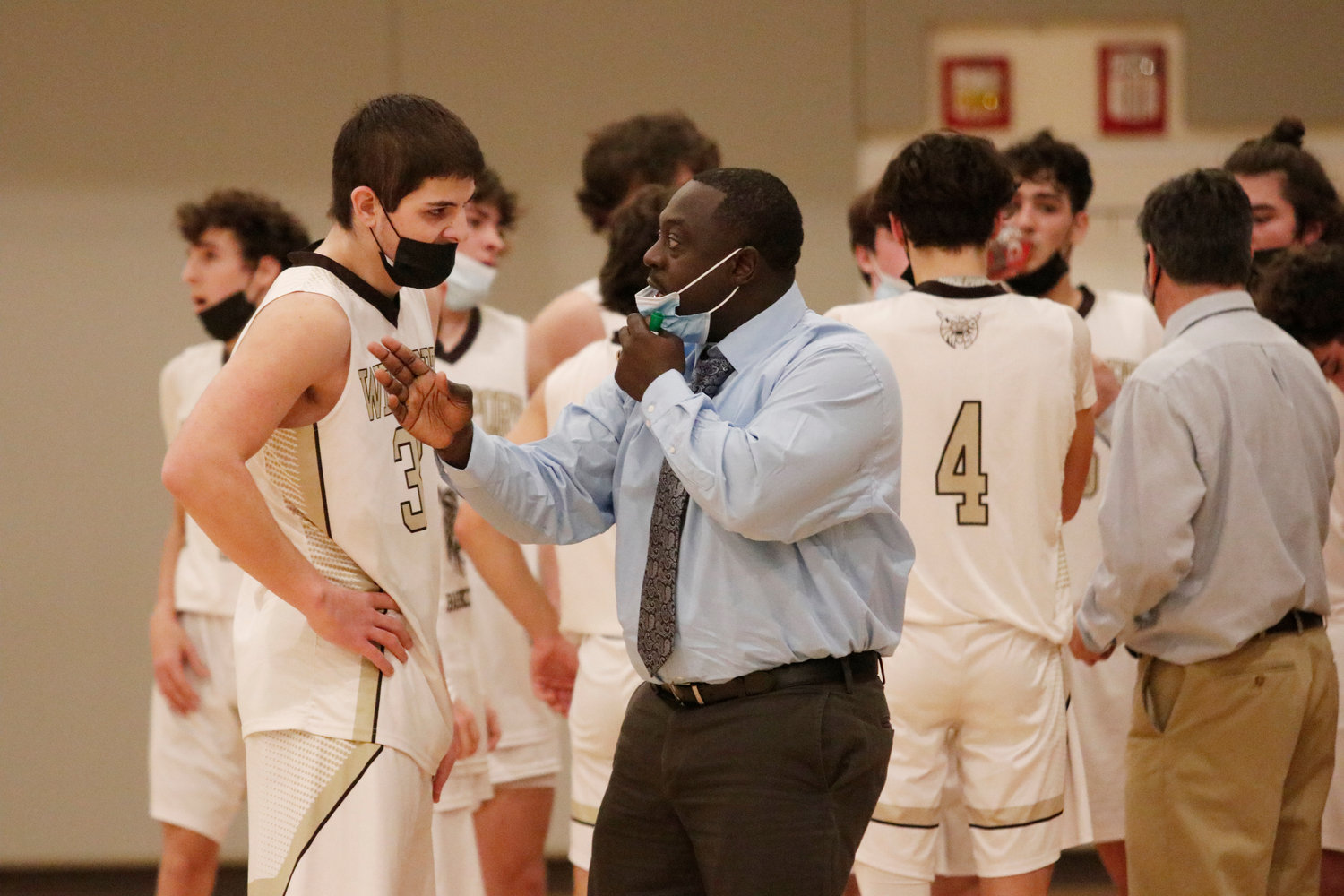 Assistant coach Lloyd Aurora speaks to Ben Poitras during a time out. 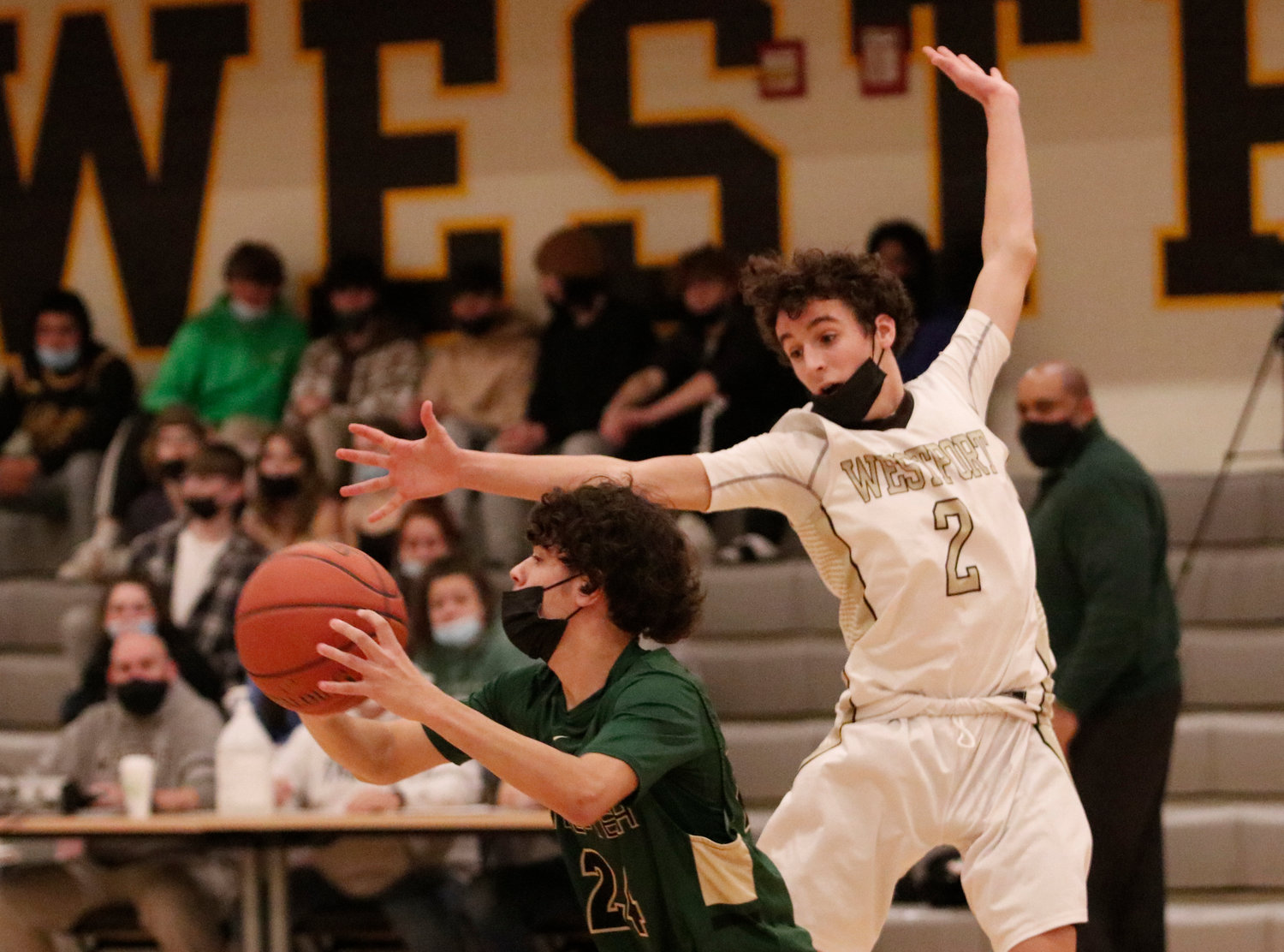 Ben Boudria tries to break up a Bears pass. 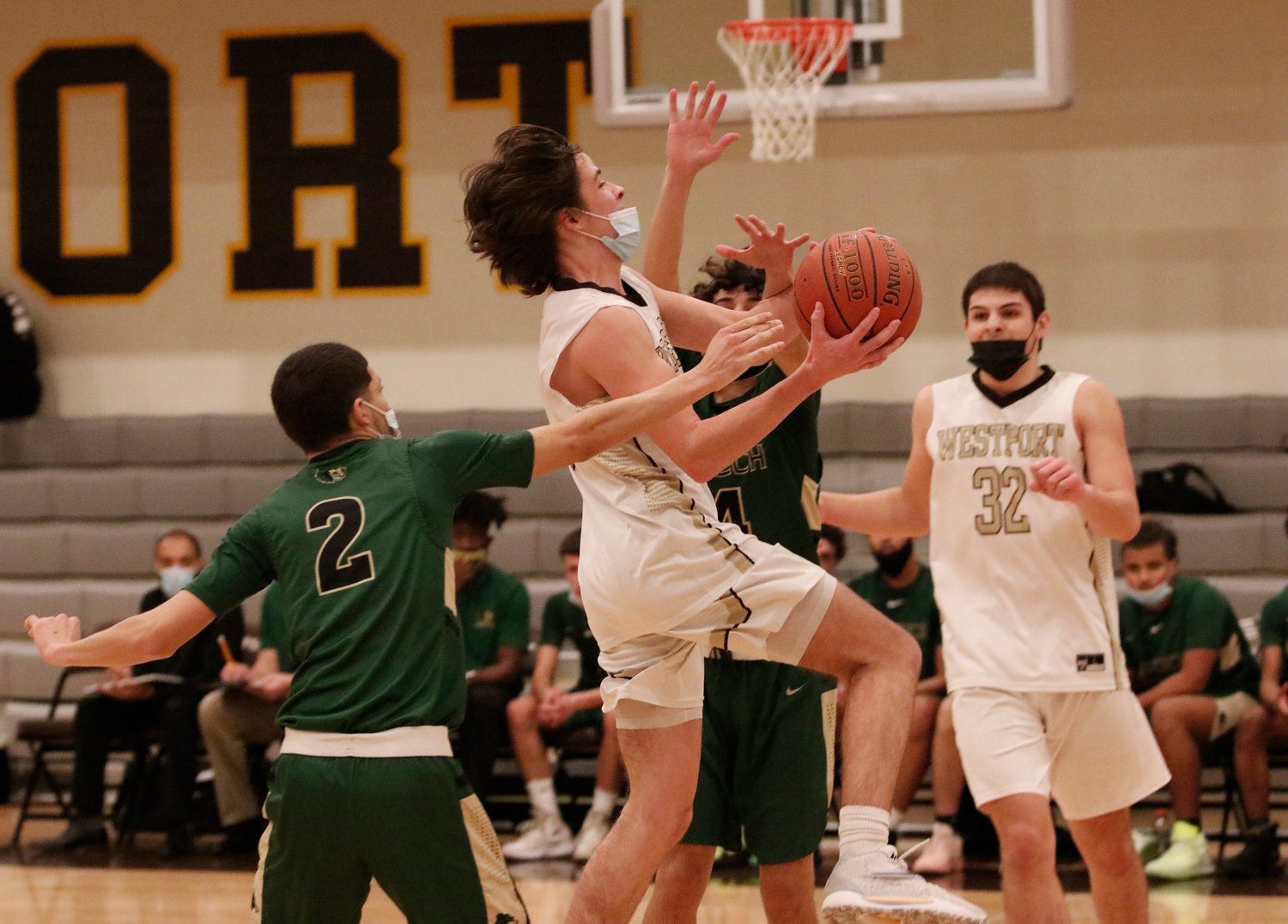 Cam Leary (left) flies in for a layup with teammate Ben Poitras (right) looking on. 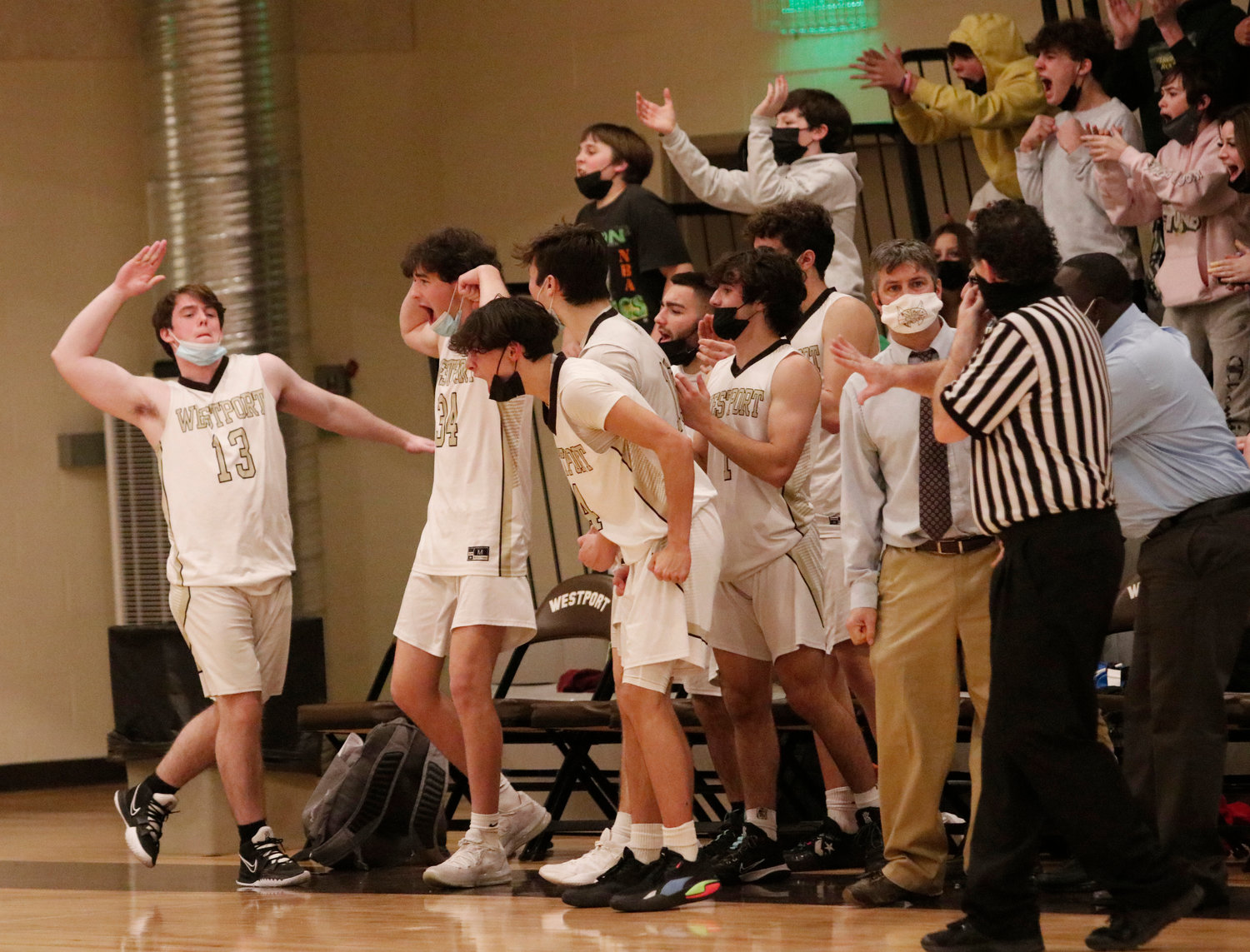 John Letendre (left) and teammates cheer on the team in the first half. 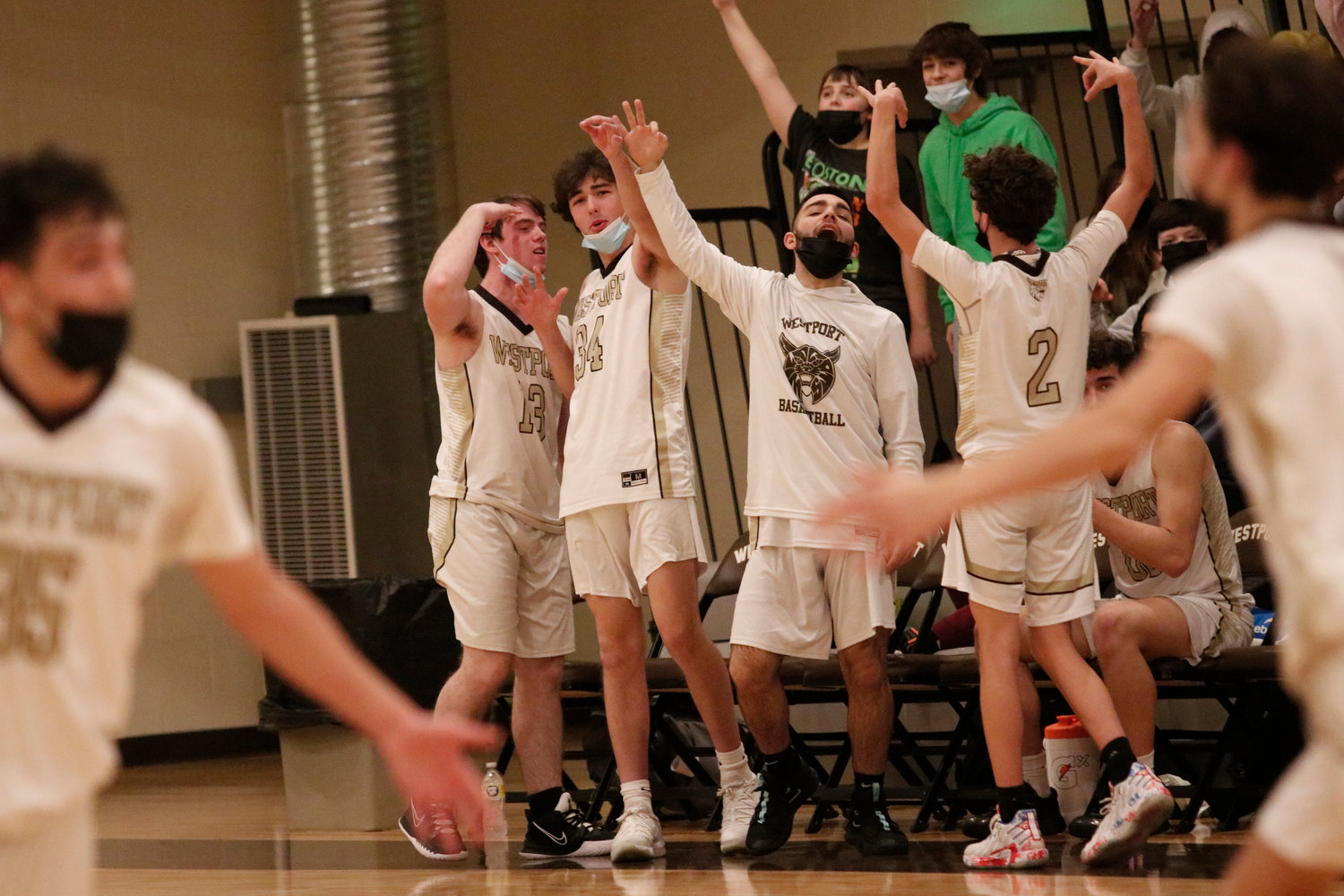 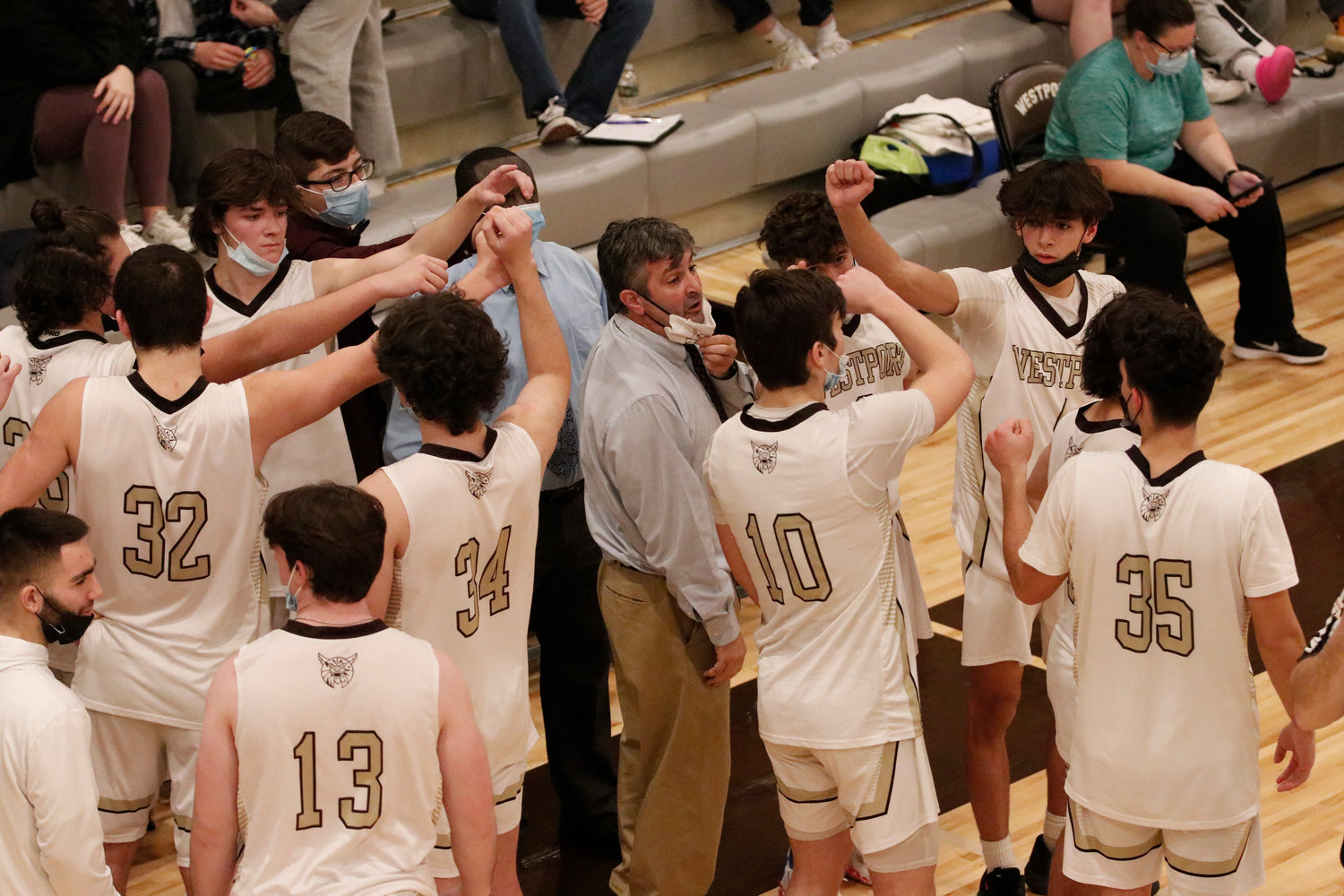 Coach Scot Boudria rallies the team during a time out. 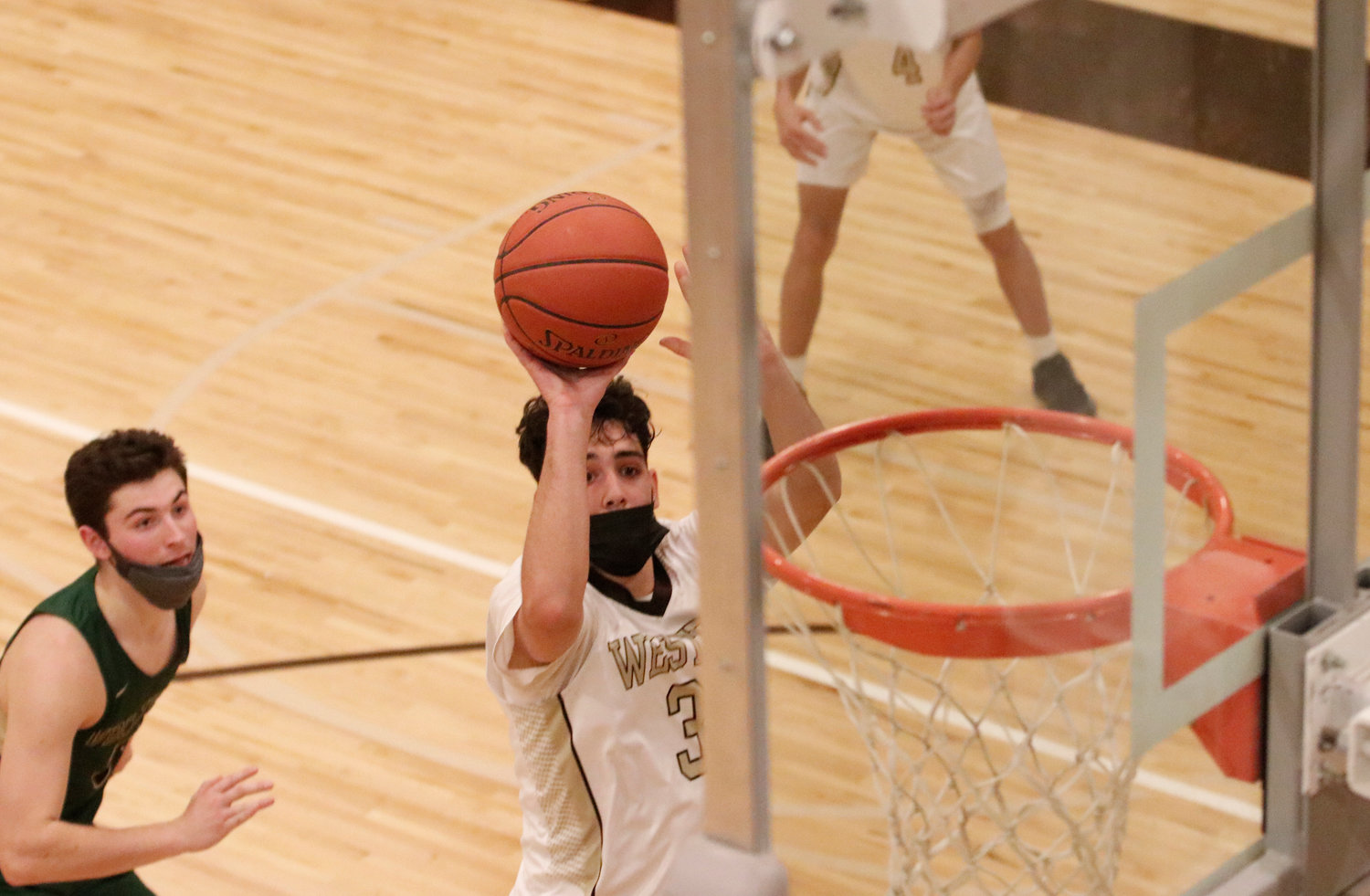 Dom Vitorino shoots a jumper in the third quarter. 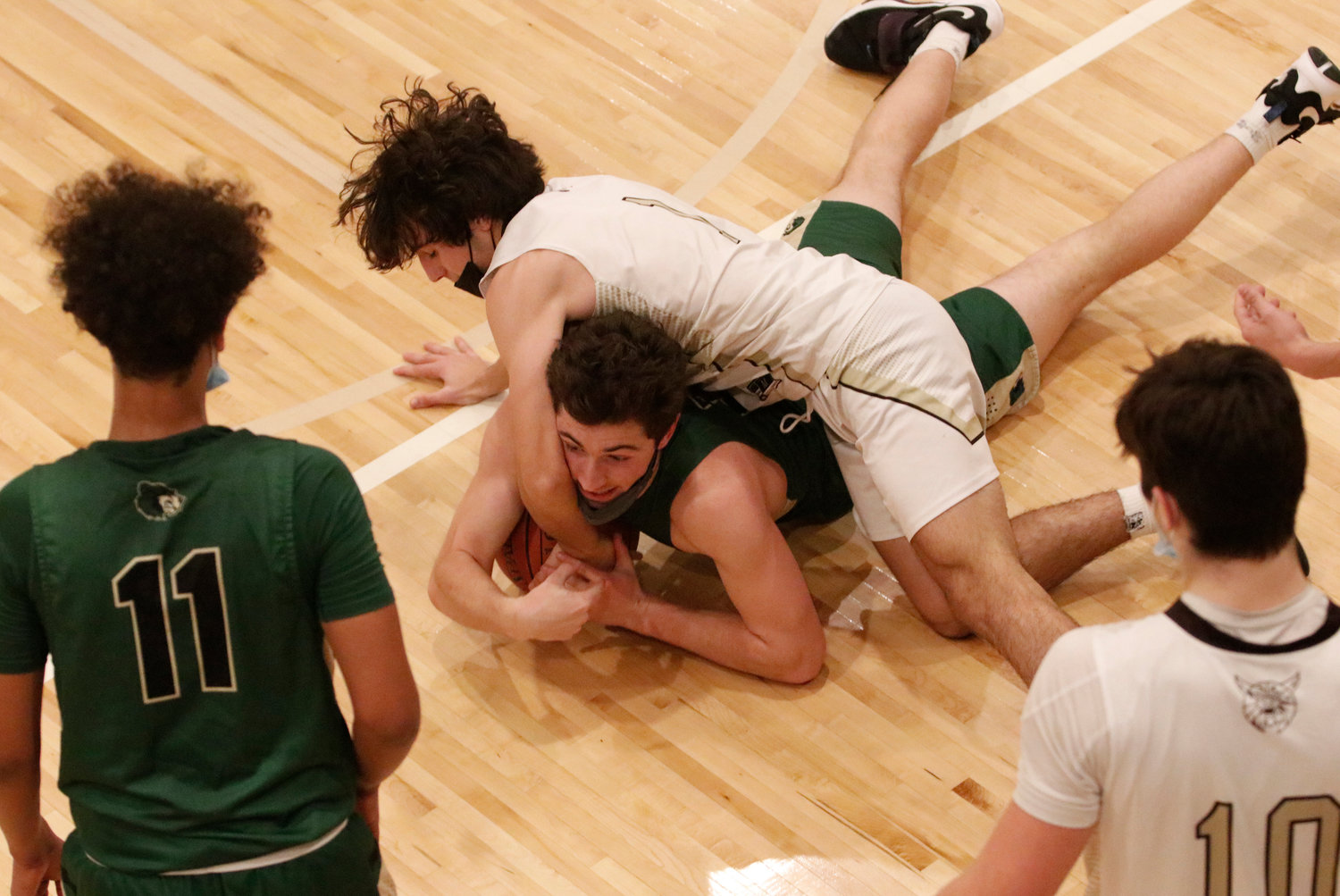 Hunter Brodeur dives on top of a Bears' player to get to a loose ball. 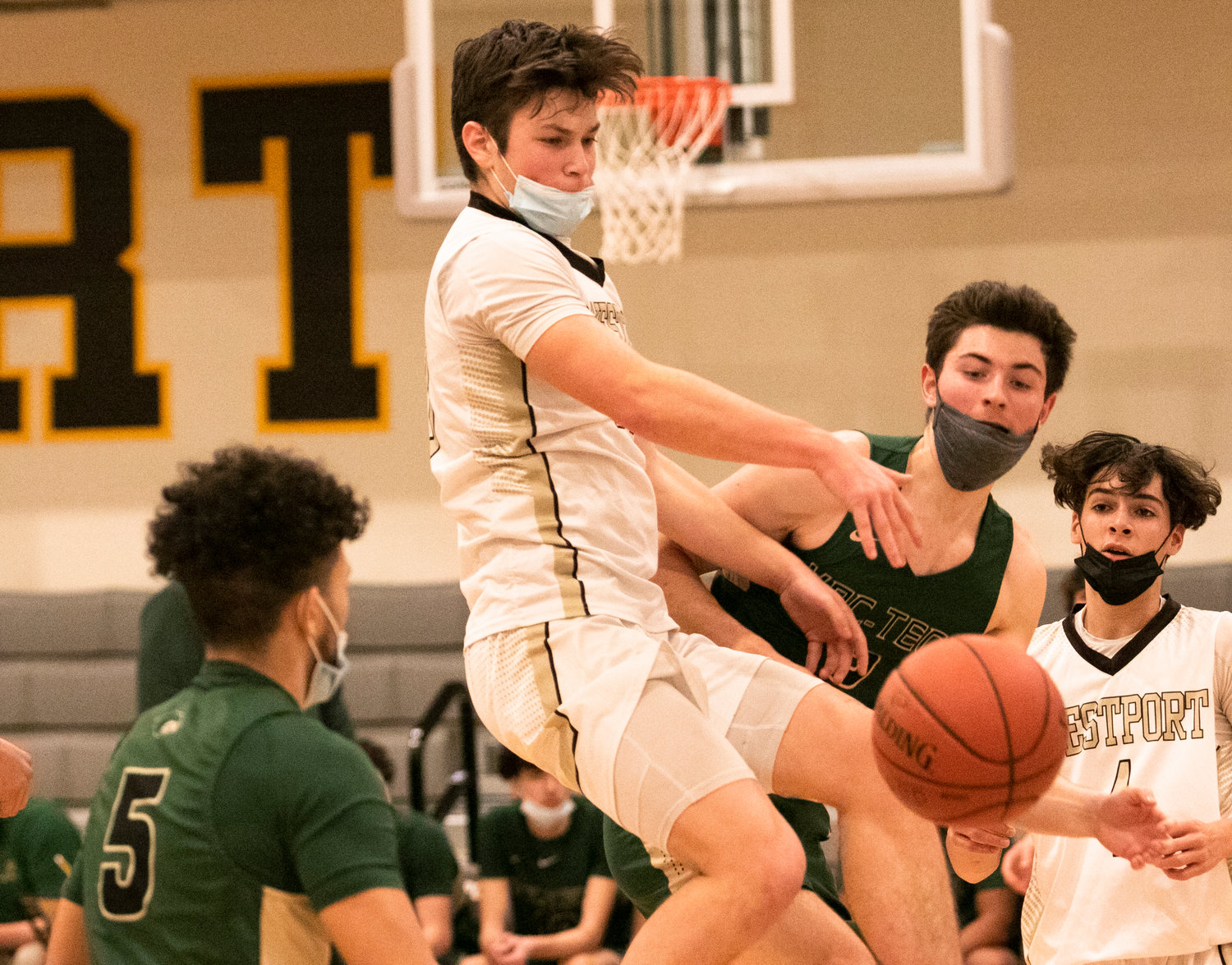 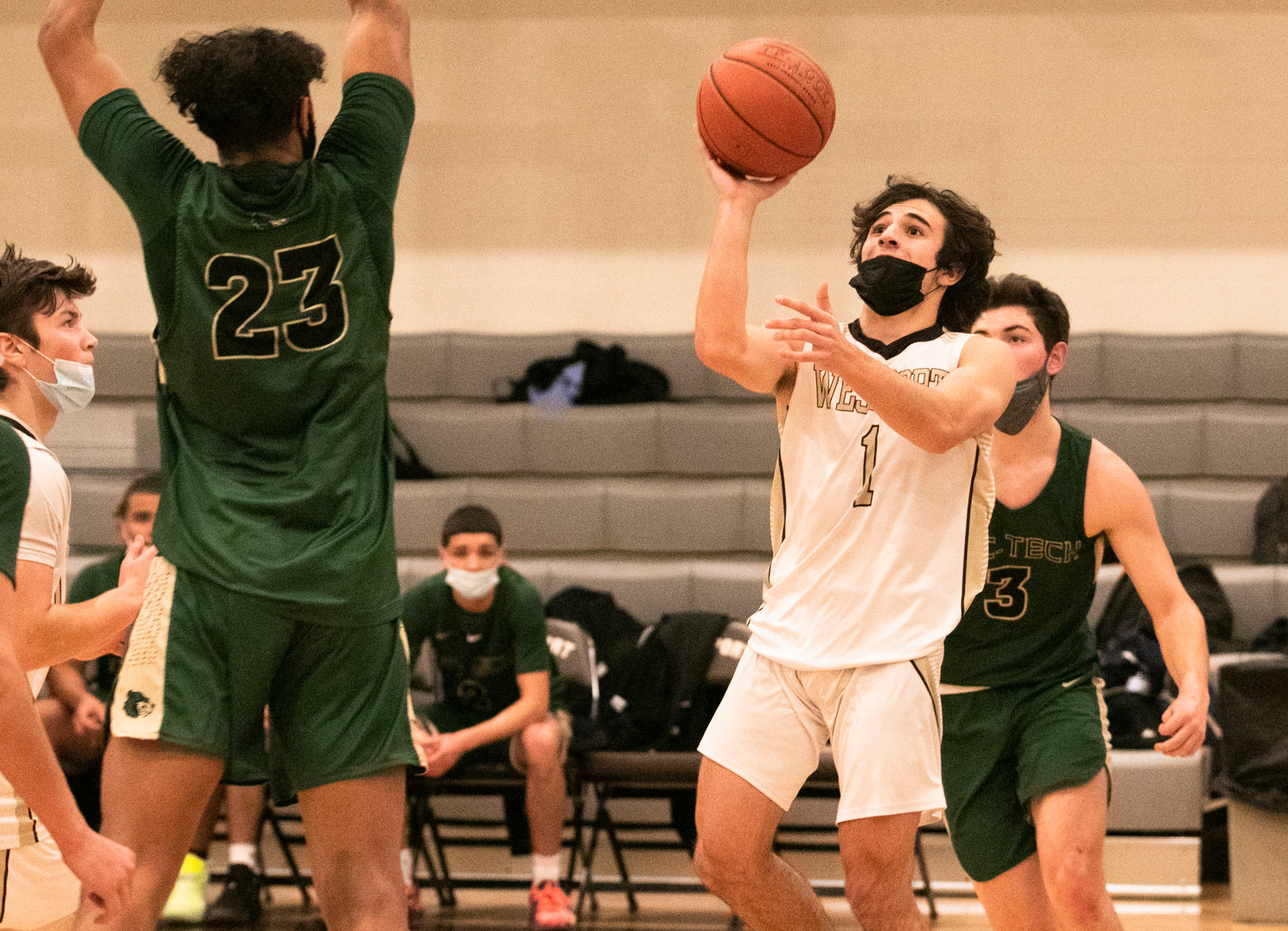 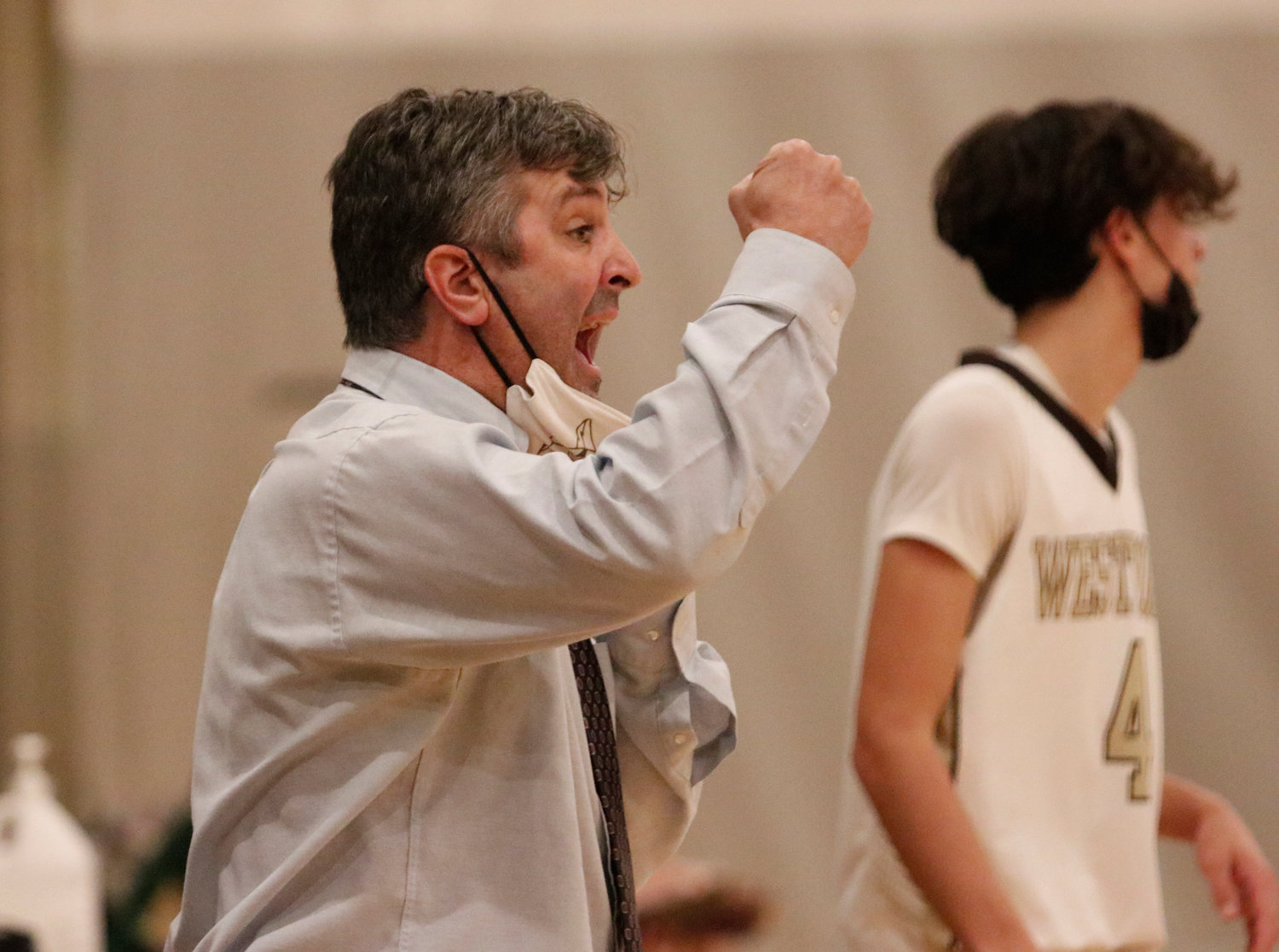 Head coach Scot Boudria barks out a play as Westport heads on offense. 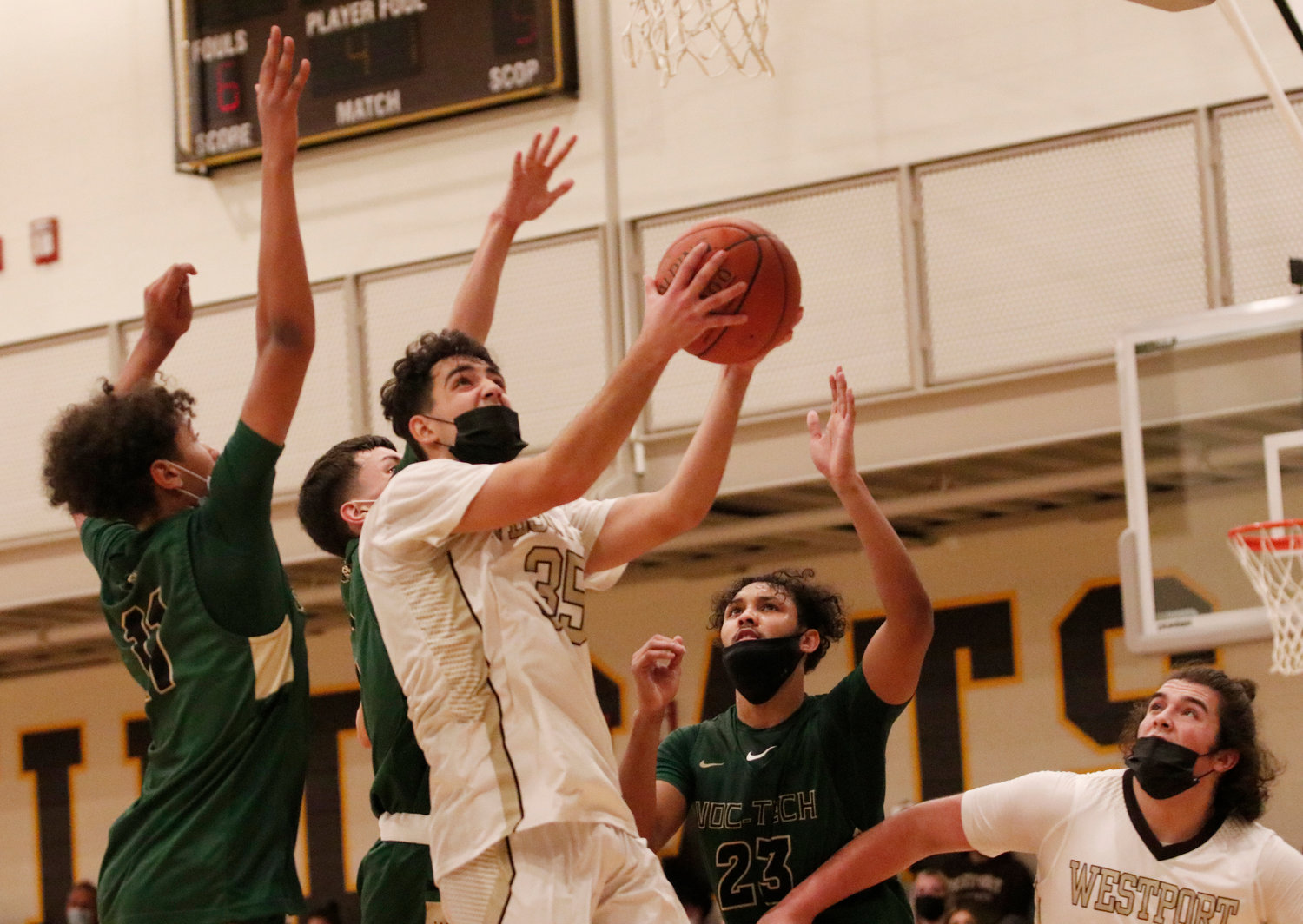 Dom Vitorino drives to the hoops with teammate Jayden Zuber looking on (right). 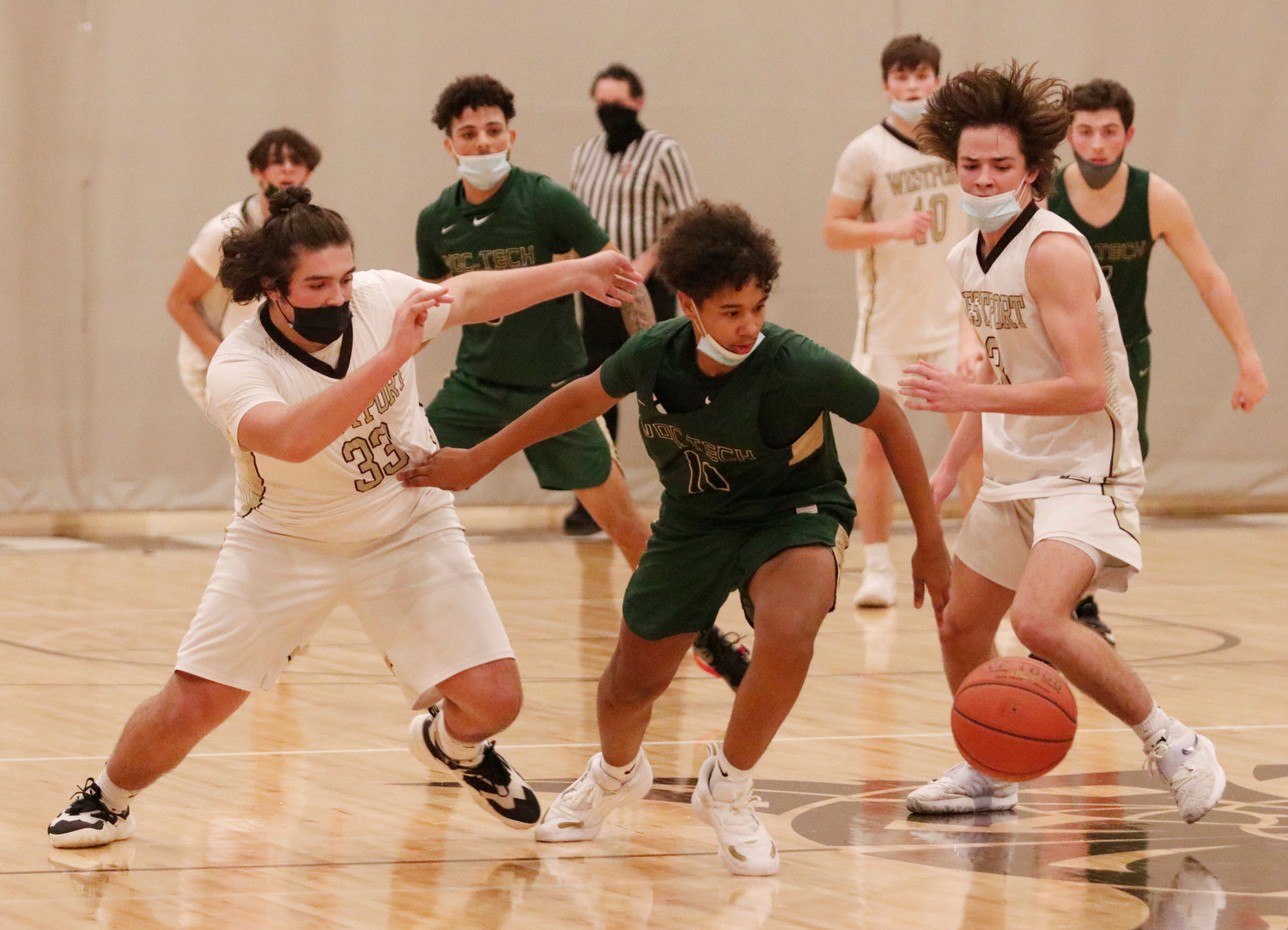 Jayden Zuber (left) and Cam Leary (right) get after a loose ball. Dom Vitorino extends for a layup in the third quarter.
Previous Next
Posted Monday, January 24, 2022 10:44 am
Photos and story by Richard W. Dionne, Jr.

The Westport basketball team doesn’t look tall, big, nor menacing during warm ups, but once the game starts, opponents find out the hard way that the fierce Wildcats can play. That scenario happened yet again on Wednesday night as Westport dispatched bigger, taller, athletic, Greater New Bedford 62-53 during a non-league home game on Wednesday night. Seven different Wildcats scored as the victory boosted their undefeated record to 9-0.

“It was a definite team effort,” said Wildcats head coach Scot Boudria. “Any given night anyone can be a high scorer out of those eight kids. We’ve had five different scorers in nine games.”

The Wildcats forced 19 turnovers while handing Greater New Bedford just their third loss of the season. Starting guards junior Hunter Brodeur, junior Ben Boudria and freshman Owen Boudria combined for 15 of them as Westport attacked Greater New Bedford with presses and traps early in the game and raced out to a 19-11 first quarter lead.

“One thing that won’t go on a stat is that we didn’t turn the ball over that much,” Coach Boudria said. “They pressured us with their 1-2-2. I thought that we attacked it pretty well.”

Brodeur took advantage of the press and scored 7 of his 15 points in the first quarter. Owen Boudria added 5 in the quarter. Both guards hit three pointers. Coach Boudria started senior forwards Aidan Rock and Dom Vitorino with the three guards. Then unleashed his bench, guard Cam Leary and forwards Jayden Zuber and Ben Poitras. The trio brought a controlled energy to the floor as they stepped on the gas pedal and combined for 18 points. Leary, a junior, scored 6 of his 8 points, Zuber, a senior, scored 6 of 10 and Poitras, a senior, added 4 points. Starting forward Dom Vitorino was on fire in the second quarter, scoring 7 of his 15 points with a three pointer as the Wildcats extended the lead to 35-26 at halftime.

“They have been playing well all year,” Coach Boudria said of his bench players. “I have confidence in my bench. I try to play them as much as I can. In certain situations they are dominant. They clean up the boards really well. Cam shoots the ball really well. Ben and Jayden are both finishing on dishes coming from our guards.”

“We work really hard in practice day in and day out,” said Cam Leary. “We try to push the starters to their maximum capability.”

“Going against teams that doesn’t really know what our bench has to offer,” said Jayden Zuber. “We can come out and surprise them, like I think we did tonight, against a really good team.”

Zuber credits the starters for pushing the the bench to be their best.

“We have played together our whole lives,” he said. “The starters push us in practice, they push in the game and they bring a lot of confidence to us and whoever else comes off the bench to play to their best capability.”

Ben Poitras, a tall athletic forward, switched from Bristol Aggie to Westport High last year and may be able to help the team under the basket. He has come a long way under Coach Boudria, but will need to step up his game against the wood of the Mayflower League.

“I have to have a lot of confidence going in to play against better teams like Bristol Plymouth and Greater New Bedford tonight.”

Wildcats tame Bears in second half

The Bears came out with a new game plan to thwart the press in the third quarter and it worked for a while. Greater New Bedford scored 15 points behind Evan Mello and Serrone Ramos who each scored 5 points in the third quarter. But they couldn’t stop Brodeur who was terrific for the Wildcats. The super quick guard sank a pair of three pointers and drained two foul shots for 8 points. Leary, Vitorino and Owen Boudria each added a bucket as the Wildcats kept pace scoring 14 points to hold a 49-40 lead after three quarters of play.

The Wildcats played well defensively in the fourth and held the Bears to 13 points. Senior forward Aidan Rock who has been on fire most of the season, had a quiet night and scored his first points from the foul line in the final quarter. Rock ended the game with 3 points. Jaden Zuber scored 4 points in the final quarter with an assist from Brodeur and Boudria. He finished with 10 points. Vitorino was money from the foul line hitting 6 of 8, to stave off the Bears down the stretch.