The Mt. Hope/East Providence High School boys’ hockey co-operative, now in its second season, has some work to do in the new year if the local entry expects to make a Division III playoff appearance. 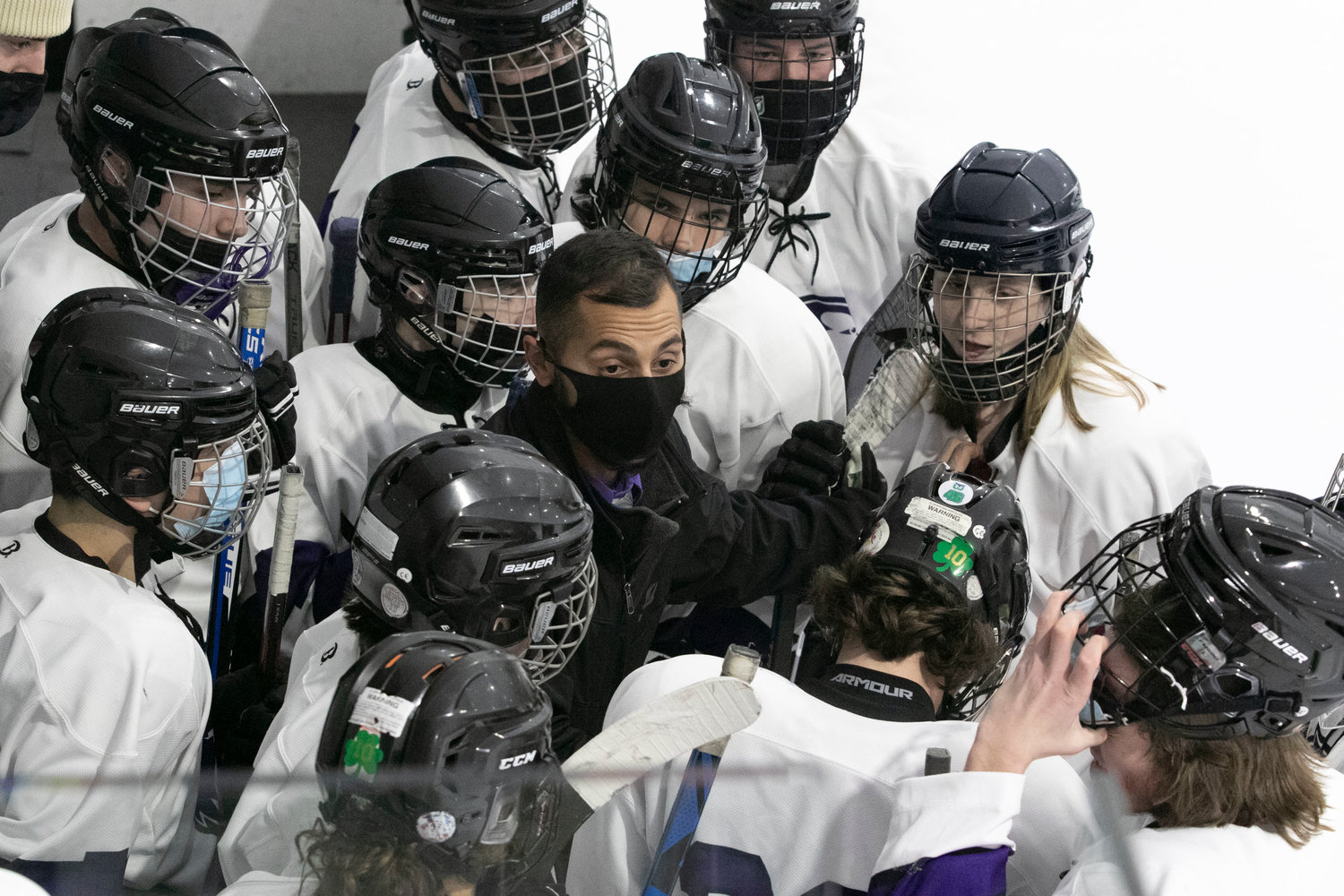 Head coach Joe DiBiase speaks to the team between periods while facing off against Coventry.
Richard W. Dionne Jr. 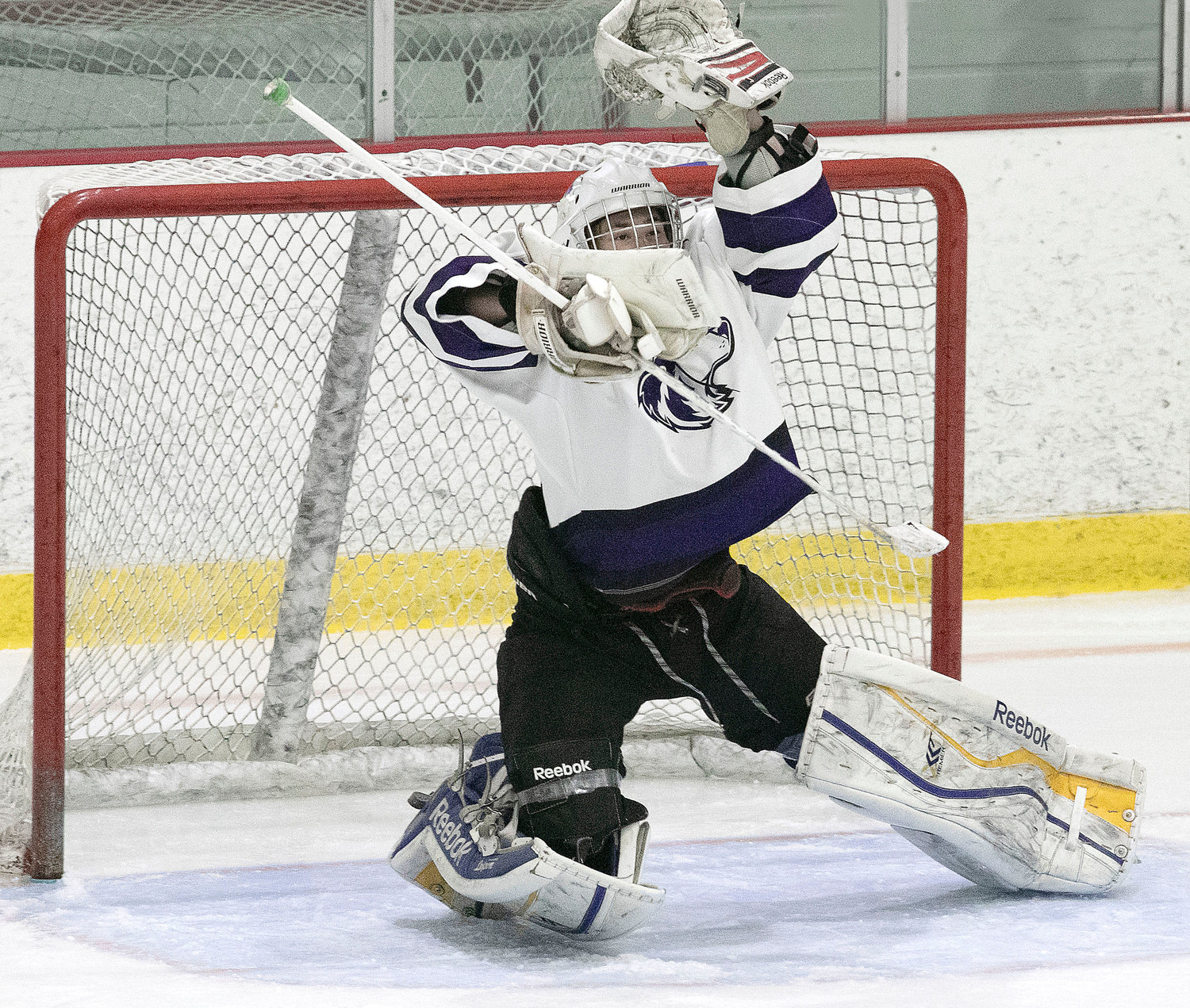 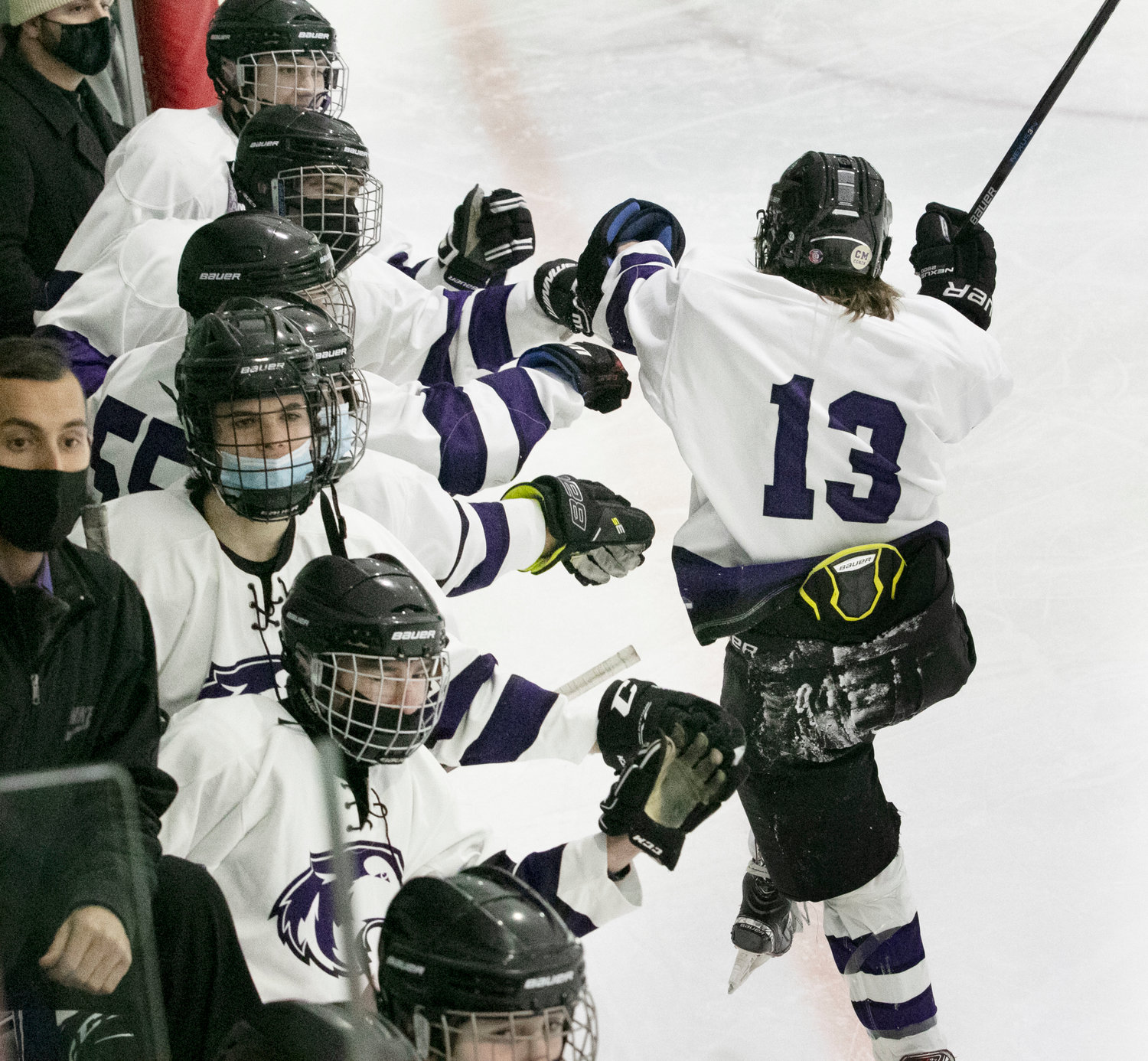 Huskies winger Ryan Colson (13) scores to tie the game, 3-3, in the first period game against Coventry prior to Christmas. They would eventually fall 9-4 in the contest.
Richard W. Dionne Jr.
Previous Next
Posted Thursday, January 6, 2022 11:25 am

The Mt. Hope/East Providence High School boys’ hockey co-operative, now in its second season, has some work to do in the new year if the local entry expects to make a Division III playoff appearance at the end of the 2021-22 regular season.

The Huskies dropped an 11-3 decision to the West Warwick/Exeter-West Greenwich co-op to begin their slate the second week of December then lost to Ponaganset 8-1. The following week, East Bay played Johnston/North Providence/Tiverton to a 1-1 tie. And the week before Christmas, the locals fell to Coventry 9-4.

East Providence product Ryan Colson, a junior co-captain of the team along with Mt. Hope senior Jake Marshall, netted a hat-trick in the opening loss to the Wizards. Another Townie, Alex Crowley, assisted on Colson’s second of the night against WW/EWG.

Colson had the helper on Colin Dos Santos’ goal in the loss to the Chieftains. He added two more goals and a couple more helpers in the game with Coventry in the Huskies’ first game of the season at their home Portsmouth Abbey rink against the visiting Oakers.

East Bay is back in action this weekend with two home games at the Abbey: Saturday, Jan. 8, against West Warwick/Exeter-West Greenwich at 8 p.m. and Sunday, Jan. 9, against South Kingstown at 4 p.m.

This is the second year for the Mt. Hope/East Providence hockey collaboration. In their first winter together the Huskies went 3-4-1 during the COVID-shortened 2020-21 season. In the one-off, single-elimination league championship tournament, the 11th-seeded locals upset sixth-seeded Coventry 4-3 in overtime in the preliminary round then lost to third-seeded North Kingstown 4-2 in the quarterfinals. Cranston East went on to defeat North Kingstown in the best-of-three game final series, 2-0.