Recently, the Teixeiras were presented a citation from the Bristol Town Council marking their 40th year of owning Mt. Hope Liquors. The couple was most appreciative, to say the least. 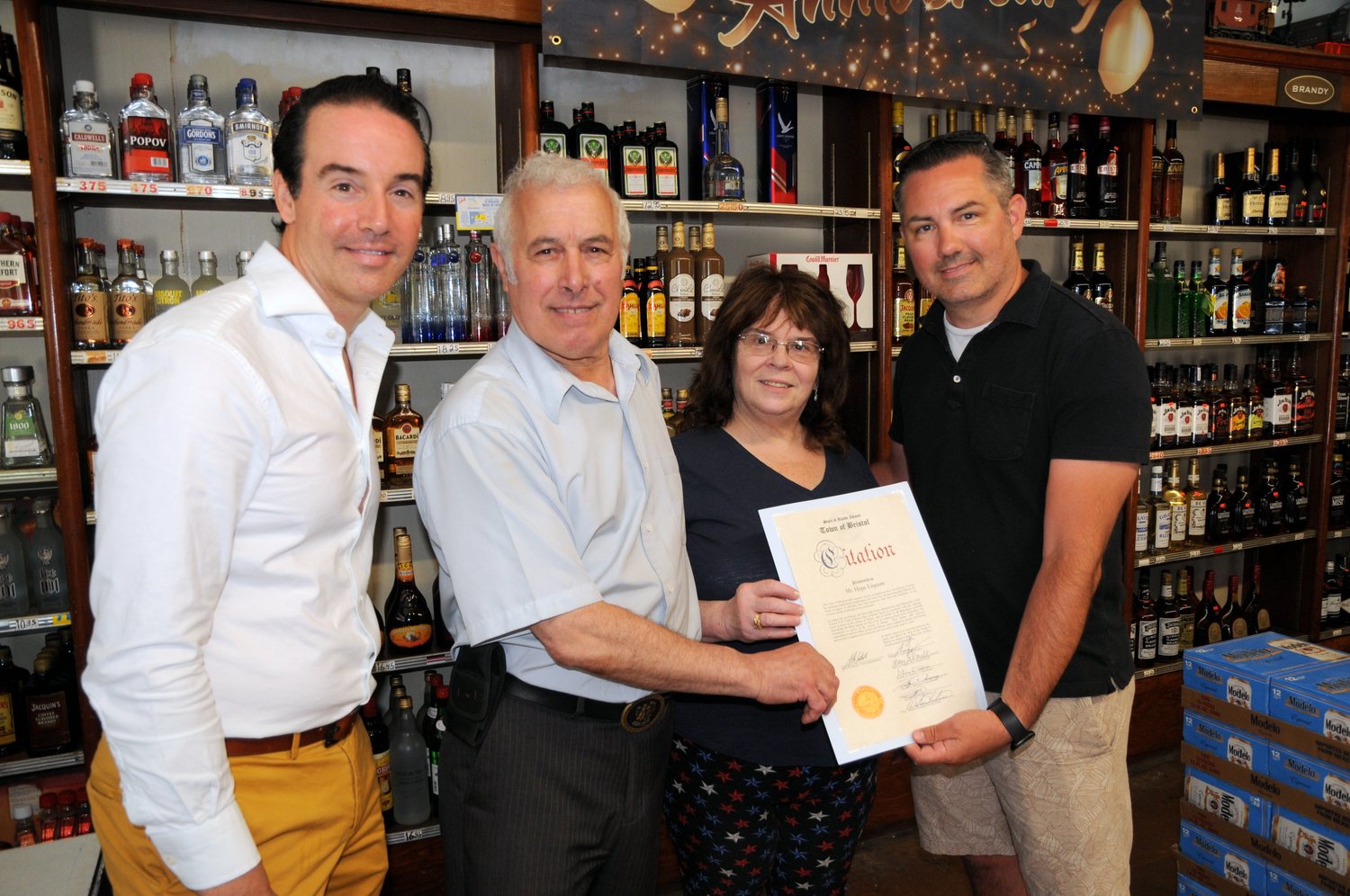 Jose and Dolores Teixeira (center) were honored by the Town of Bristol this past week in recognition as owners of the Mt. Hope Liquor Store, which celebrated its 40th anniversary. Making the citation presentation were Town Councilmen (Tim Sweeney (far left) and Aaron Ley (right).
Manny Correira
Posted Wednesday, June 29, 2022 10:00 pm
By Manny Correira

For Jose and Dolores Teixeira of 2 Dolly Drive, life has been good, especially for Jose, whose bright smile and positive attitude has won over many friends as the owner of Mt. Hope Liquor on Hope Street.

Since arriving from his native Portugal and residing here is Bristol many years ago, Jose was in a very talkative mood the other day in describing his success story at Mt. Hope Liquor, which celebrated its 40th anniversary on June 26.

Recently, the Teixeiras were presented a citation from the Bristol Town Council marking this auspicious occasion. The couple was most appreciative, to say the least.

“It’s been quite a remarkable experience for me and my wife,” said Jose, as he was greeting familiar customers the other day entering the front door of his business during the Fourth of July Celebration Concert Series in nearby Independence Park. “I value my customers. I call my customers my friends.”

Born on Nov. 23, 1949 in Cabouco, Vila de Lagoa in San Miguel, the Azores, Jose immigrated to the United States on Jan. 6, 1967 at the age of 17 with his mother, then a widower, and his five brothers, Manuel, Lionel, Arthur, Adriano, and Mario, and two sisters, Fatima and Linda.

Settling in Bristol, Jose’s first job was in landscaping for Marshall Landscaping of Bristol. In 1969, he switched jobs and worked at Atlantic Tubing in Cranston. Two years later, he was promoted to foreman. In 1974, he was hired by Carol Cable in Warren, and later was elected chairman of the grievance committee of Local 4543.

In 1982, Jose purchased the Mt. Hope Liquor Store, which was initially owned by John Sousa in 1954 and located at the corner of Bradford and Hope Street. It was later moved to its current location at 678 Hope St.
“John had the business for 17 years,” Jose said, “and then it was sold to a gentleman from Attleboro who owned it for two years. Then, Paul Salcone bought it and owned it until 1982.”

During his early years in Bristol, Jose found time to court the former Dolores LePage, a strikingly beautiful student at Bristol High School.
As he recalled, “I was driving by the high school in 1972 and picked her up and took her for a ride, and the rest was history.”

On Oct. 5, 1974, Jose married Dolores and the couple would go on to have five children, Elizabeth Morency, Laura Octaviano, Joseph Teixeira, twins Michael and Thomas Teixeira, and nine grandchildren.

Also known as “Mr. T” by many of friends, Jose (and Dolores) are embedded in the roots of St. Elizabeth’s Church and many of its committees. In 2016 and 2019, Jose and Dolores proudly served as Mordormos of the United Brotherhood of the Holy Spirt and Holy Trinity Feast, arguably the church’s highest honor. Next year, the couple will have that same honor once again.

“We love that feast,” said Jose. “St. Elizabeth’s Church means a great deal to both of us and our families.”

Being an active businessman, Jose Teixeira admittedly enjoys the fellowship of many of the organizations he belongs to, including the Beneficial Association Dom Luiz Filipe, the Bristol Sports Club, Santo Cristo Club, and Banda Santa Isabel. In 2010, he co-sponsored the Lincoln Club soccer team, and he continues to be an active member participating in various community events such as the Bristol 4th of July Parade, Day of Portugal parades, and other organizational events ad association monthly meetings.

As a parishioner of St. Elizabeth’s Church, Jose collaborates with the Santo Cristo Feast and is a benefactor of the Holy Trinity Committee.

Jose always enjoys traveling when he’s not working daily at his liquor store. He has visited 13 countries with his wife, and has also traveled to all nine islands of the Azores. He also enjoys dancing with his wife and takes great pride in being a Benfica soccer fan.

“They’re hard workers, and they are always willing to do something for people,” he explained.

“Again, I want to emphasize that my customers are very important to me,”Jose said in conclusion. “I’ve made a good living running this store with my wife, and I call my customers my friends. It doesn’t get any better than that.”