Resident and council spar over parking near rights of way

A Barrington resident says the town is restricting access to the shoreline if it does not allow parking on the streets near public rights of way.

Resident and council spar over parking near rights of way 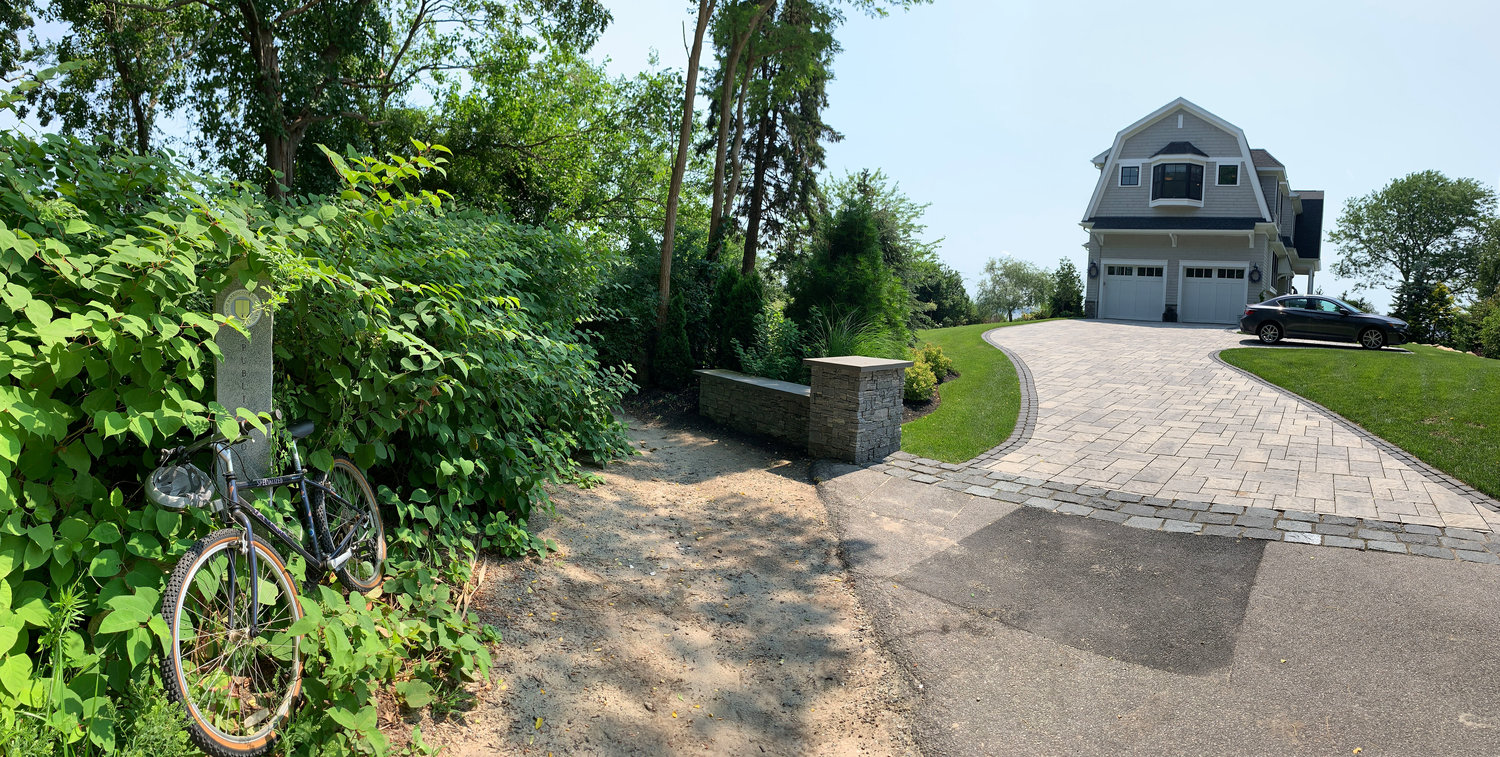 A bicycle leans against a public point of access granite marker at the end of Appian Way. The street is posted as “No parking either side.”
Photo by Richard W. Dionne Jr. 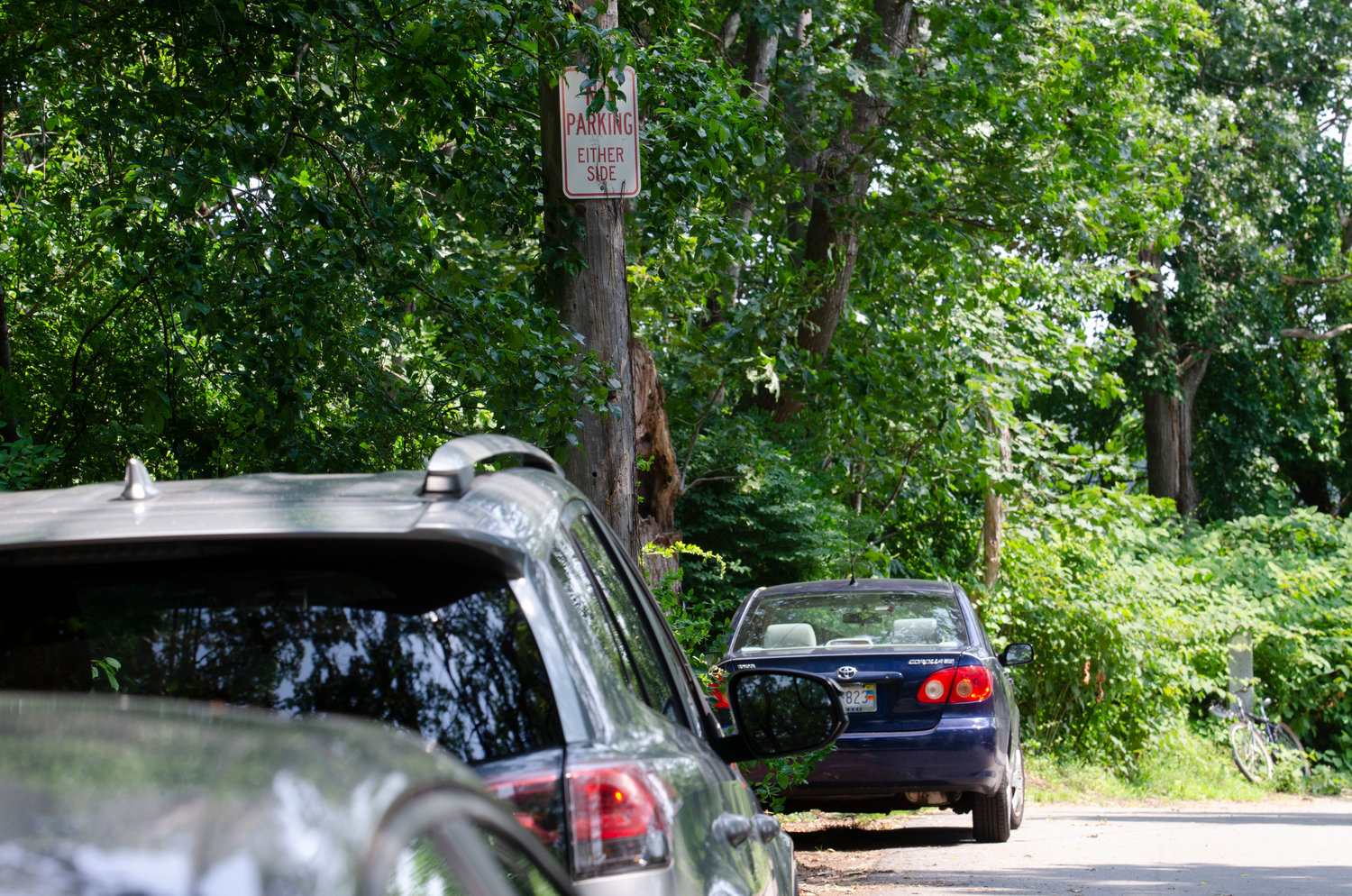 Cars line the side of Appian Way, leading to the Mussachuck Beach public access point. A sign bolted to the utility pole reads “No parking either side.”
Photo by Richard W. Dionne Jr.
Previous Next
Posted Friday, October 15, 2021 10:01 am

We are open and committed to allowing everyone to have access.”
Councilor Carl Kustell

Barrington resident Ken Block questioned whether the fire chief was the right person to ask about road standards. During the council meeting, Mr. Block suggested the town seek out a traffic engineer to help determine which roads are suitable for on-street parking, and which ones are not.

Mr. Block argued that certain roads narrower than 26 feet can safely have parking.

Council member Jacob Brier said he wanted more information on how officials determined which roads to be unfit for on-street parking even though they met the required width. He said he would also like to speak with a traffic engineer before making a final decision.

Ken Block was not the only resident to speak on the issue of parking at the recent council meeting. Katherine Quinn said she lives near a public access path leading to the St. Andrew’s Farm Field property, and she does not find it threatening at all when people use the path. She wondered why the council would not just add a few parking spaces near some rights of way.

“The resistance is disturbing, really,” Ms. Quinn said, adding that she believes the town should hire a traffic engineer.

Some residents sided with the council, however. Mike Guilbeault lives near the town beach and said there is plenty of public parking at the beach. He said that adding parking near rights of way would create safety issues in those neighborhoods.

A Barrington resident says the town is restricting access to the shoreline if it does not allow parking on the streets near public rights of way.

On multiple occasions during the Oct. 4 meeting, council members shared examples of public access points across town that offer parking. They also said Barrington maintains dozens of rights of way which are accessible to everyone.

Barrington Town Council President Michael Carroll told resident Ken Block that there is no effort underway to bar people from using the town’s rights of way. In fact, Barrington officials have made an effort to mark the public access points all across town. But Mr. Block said Barrington’s no parking policies have created a problem for the majority of residents in town who do not live within walking distance of the shoreline. He said the town was blocking access by not not allowing parking near the rights of way.

The discussion at the council meeting stemmed from a parking report ordered by Barrington Town Manager Jim Cunha. The report identified 20 streets in town where parking is currently prohibited that met the town-determined standard for allowing on-street parking. Many streets on the list are located within walking distance of the shoreline and some abut public rights of way.

Mr. Cunha told the council he relied upon objective criteria — national fire code standards — and subjective criteria — two-way traffic, turning requirements, business and residential needs, school zones, traffic speed concerns and the quality of life for residents who live nearby — while deciding which of the 20 streets could accommodate parking.

He whittled down the list to 13 streets, including Bay Spring Avenue, Broadview Drive and Wildflower Road, which he recommended be considered to allow parking.

After a lengthy discussion, the council voted unanimously to have the town solicitor prepare an ordinance allowing parking on the 13 streets listed in the report. Council members said there will be a public hearing prior to their vote, ensuring residents on those streets will have an opportunity to comment on the proposal.

It is not a done deal, councilors said.

Council member Jacob Brier supported the motion, but requested a deeper discussion about the roads not included on the list of 13, and how the town could add parking to those roads without negatively impacting the quality of life for residents there.

Getting to the shoreline

Mr. Block’s interest in public rights of way surfaced this past summer as he tried to find places where he could take his dog swimming.

During an earlier interview with the Times, Mr. Block said his family’s golden doodle loves to swim, but added “Trying to find a place where I can get her into the water is extremely difficult.”

Mr. Block also questioned enforcement of the no parking policies. He said residents who live near rights of way only call police to report parking issues when it suits them — he said they will allow on-street parking when it’s someone they know or their landscapers’ vehicles. Residents who live near right of way will even call police to get an exemption from the parking rules when they are expecting company, such as during a graduation party or on the Fourth of July, Mr. Block said.

Mr. Block, whose neighborhood does not abut the shoreline, said the town should figure out a way to add a reasonable number of parking spaces near rights of way. He said the spaces could be limited to Barrington residents only.

Town officials argued that Barrington already provides plenty of public parking near the shoreline, ensuring access to the water for residents and non-residents alike: There are dozens of parking spaces at the town beach, many at Police Cove Park, Walker Farm on Hundred Acre Cove, and at Latham Park and Haines Park along Bullock’s Cove.

Council President Carroll told Mr. Block that if he was interested in accessing the stretch of shoreline that includes Barrington Beach, he was welcome to park his car at the beach. He asked why parking spaces would need to be added on the side streets near the town beach if there was so much parking available so close by.

Mr. Block said accessing the beach at the end of Watson Avenue while parking at the town beach would mean that he would need to walk about a mile from the lot to that part of the shoreline. Mr. Carroll challenged Mr. Block on his calculated distances, and continued to question why the resident would not just park at the town beach, after all it is all the same stretch of coastline.

Mr. Block then asked about parking in the Alfred Drown neighborhood.

Later in the meeting, councilor Carl Kustell said he believed the issue was really about dogs, referencing the resident’s earlier comments about having no place to bring his dog swimming.

Mr. Kustell also told Mr. Block that he felt the need to address what he believes was an unfair attack against the town’s reputation.

Mr. Kustell was referring to a Boston Globe article that published a few days before the council meeting — the article, titled “Barrington, R.I. is Balking at Adding Parking Near The Shore,” included comments from Mr. Block that were critical of the town’s policies.

Mr. Kustell said Mr. Block was pitting neighborhoods against each other, adding that the idea this was some sort of classist plot was “over the top.”

In a followup interview, Mr. Kustell said Mr. Block played a role in creating this idea that Barrington is a town where there is no public access to the shoreline. That is not true, Mr. Kustell said.

“We’re open to everybody,” Mr. Kustell said. “It’s really important to get the facts straight and not have a misperception of what this town’s about. We are open and committed to allowing everyone to have access.

“I want to see an accurate representation of the town I know, and we all know.”

He later added: “Every community has challenges, but I was disappointed with The Boston Globe’s coverage. Barrington is a town of friendly people with great public amenities, including a beach that is accessible to everyone by car, by bike or on foot. That’s not at all the impression one gets from The Globe.”

Barrington Town Manager Jim Cunha said he too was disappointed with the portrayal of Barrington in The Globe article.

“Absolutely it bothers me,” Mr. Cunha said. “That’s not what Barrington is about. Mr. Block is doing a disservice to his own town.

Mr. Cunha said this entire issue about rights of way started with Mr. Block looking for a way to take his dog to the beach.

Mr. Kustell agreed. He said he grew up with a dog — a German shepherd — and he likes dogs. But there are some people who are not comfortable when dogs run up to them at the beach.

“You have to balance the interests of other people,” Mr. Kustell said.

The council members also want to emphasize that the parking study and proposed ordinance amendment could add more parking to 13 roads, including some that are located within walking distance of the shoreline.

The council is actually moving toward adding parking, he said.

“I think we are taking steps in the right direction,” Mr. Kustell said. “We want feedback from everyone in town, feedback for how we can increase parking…”

Mr. Kustell later added: “I think the town’s reputation is important. It shouldn’t be besmirched unfairly.”